Bird watchers may initially feel dismayed at the birdlife in Cape Town. There are plenty of recognisable imports – feral pigeons, European starlings and house sparrows – but little worth lifting the binoculars for.

Drive a little out of the city, however, and even the most famous and well-visited places on the Cape Peninsula turn out to be bird watching hotspots. And that’s before you start going off the beaten path for some of the best bird watching sites in the Western Cape, all within a forty minute drive of Cape Town. 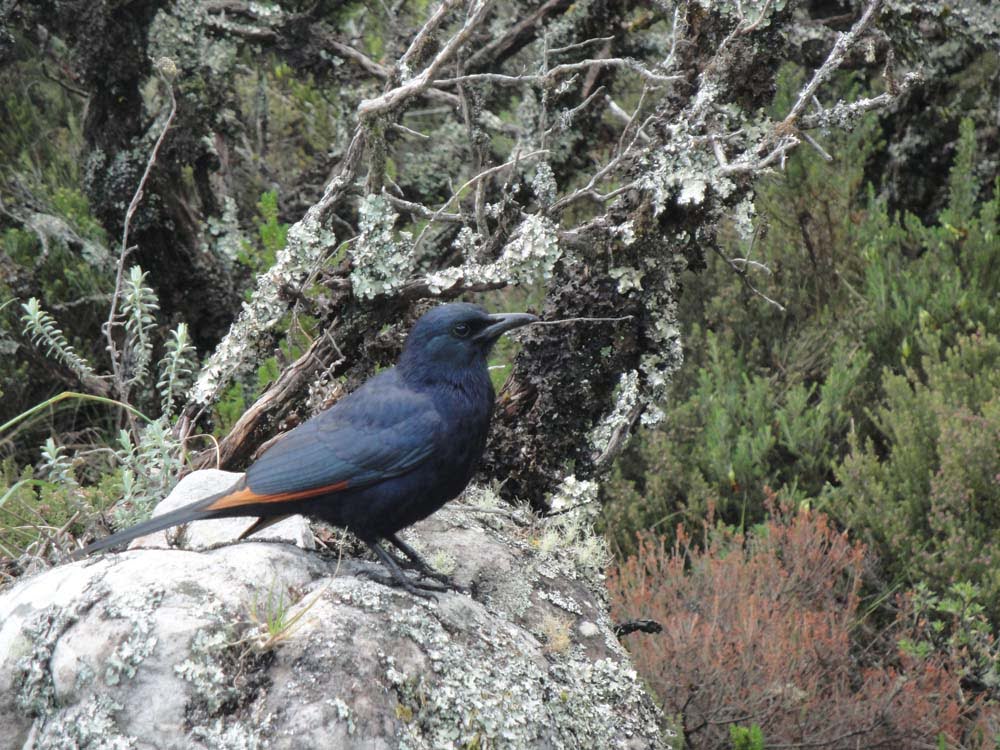 I usually advise birders to stay away from Table Mountain. After all, most visitors take the cable car to the windswept, sun-roasted Table Top which is pretty thin on birdlife. But the mountain’s lower reaches are home to many of the Cape’s mountain birds – ravens, falcons and rock pigeons – as well as fynbos specialists such as the orange-breasted sunbird and Cape sugarbird. Indeed, these two species can easily be seen from Table Mountain Road, just past the Lower Cable Car Station in the thick stands of proteas that line the road.

Alternatively, a walk along the meandering 12 Apostles Pipe Track will give bird watchers plenty of mountain and fynbos birds along with thicket species – bulbuls, boubous and robin-chats. Fitter bird watchers can hike up into the wilder parts of Table Mountain for mountain rarities such as ground woodpecker, and should plan a route to include patches of indigenous forest for the Cape’s forest birds such as olive thrush and Cape batis. 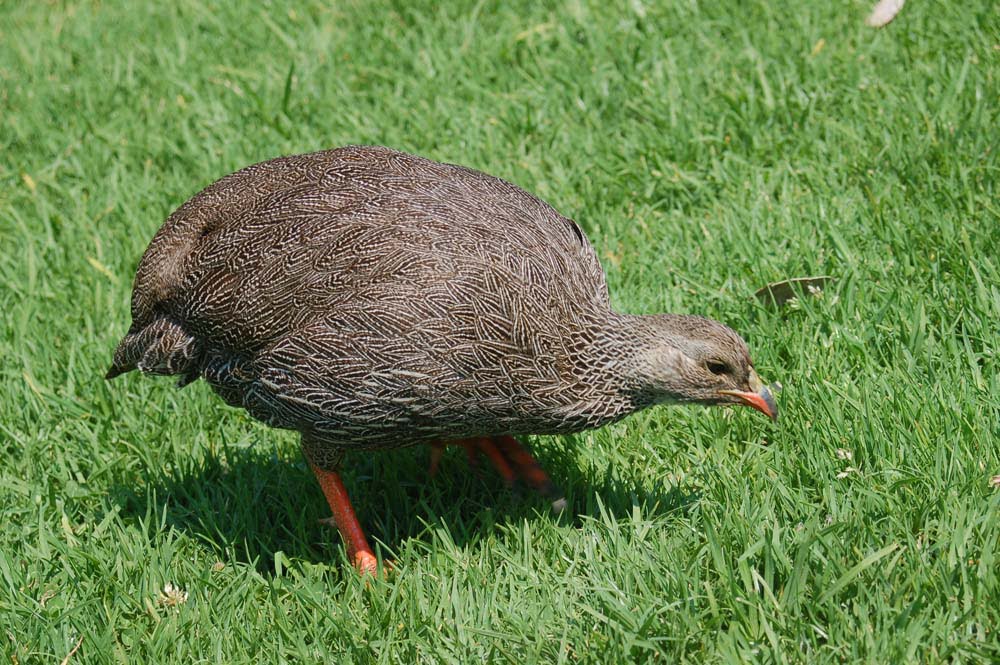 With dozens of indigenous habitats set against natural forest and lawns swept by flocks of geese, guinea fowl and francolin, Kirstenbosch Botanical Gardens is as rewarding for the bird watcher as it is for the botanist. Go early before the crowds arrive and keep an eye on the sky above you – forest and jackal buzzards often drift overhead – and don’t forget to ask where the Spotted eagle-owls are: the resident pair are often very obliging when it comes to having their photograph taken.

Beds of flowering heathers and proteas make spotting the Cape’s sunbirds easy and birders usually get all three local species – orange-breasted, malachite and southern double-collared. Cape sugarbirds are often seen feeding on protea bushes in the higher areas of the gardens, and every patch of trees is alive with the whoops and whistles of Cape and sombre greenbuls, the southern boubou, olive thrush and Cape robin-chat. Stroll into the dappled embrace of the forest and you should find the Cape batis and – in summer – the paradise flycatcher. 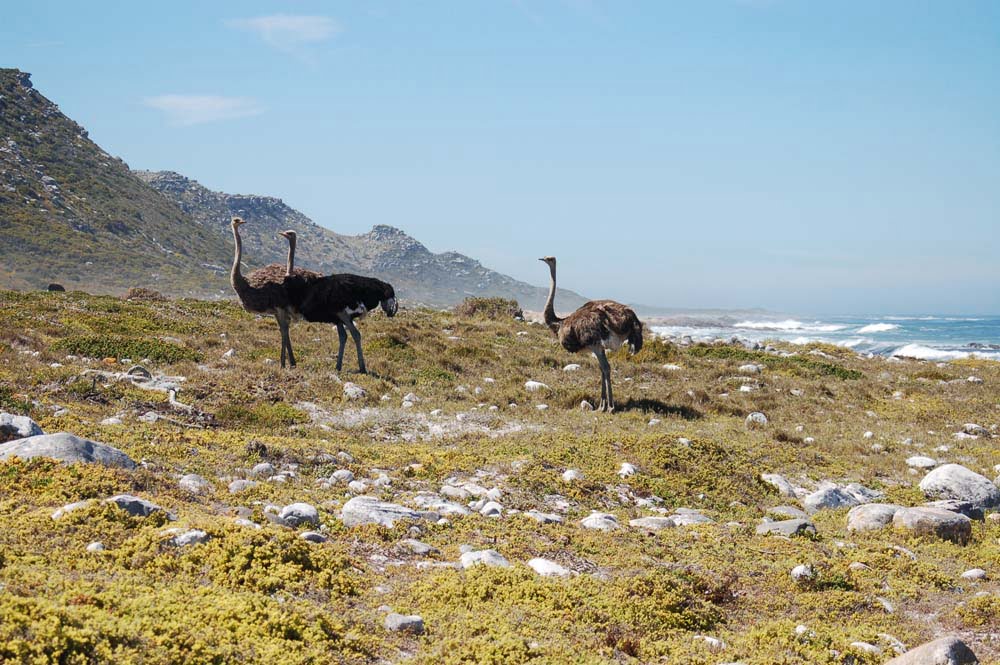 Ignore the temptation to drive straight down to Cape Point: the Cape of Good Hope Nature Reserve is 57 square kilometres of virtually deserted wilderness and there are excellent birding corners to explore before you marvel at the views at Cape Point itself.

Head for the Olifantsbos area and its Atlantic beaches. Flat and flanked by fynbos and bushy strandveld vegetation, the beaches are home to large numbers of seabirds like gulls, terns, cormorants as well as waders such as avocet, white-fronted plover and turnstone. Look out to sea and you may spot ocean birds like Cape gannet and even an occasional passing skua or albatross.

Ostriches are one of the big draw cards here. Once part of the suite of big animals that roamed the Cape, they seem out of place when juxtaposed against a blue ocean but they are as natural here as they are on the African savannah.

You can usually see ostriches as you drive through the quieter areas of the reserve – the road to the Cape of Good Hope is especially good for them – but it is worth walking a bit too. Just back from the coast are fynbos habitats with Cape siskins and Cape buntings as well as Cape grassbirds and quails in wetter areas. 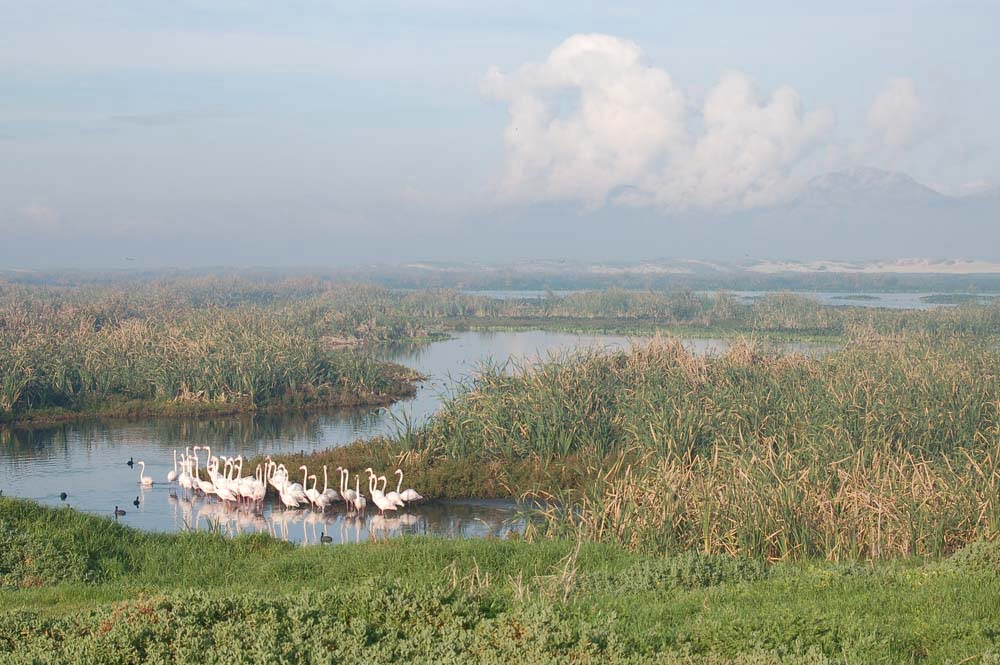 Connecting the Cape Peninsula to the mountains of the Winelands, the Cape Flats is now a mostly flat and featureless expanse of housing and alien vegetation. Go back a couple of hundred years and it was a rolling landscape of tall, thickly vegetated dunes and shallow wetlands – take a trip to Strandfontein Sewage Works or its smaller sister the Rondevlei Nature Reserve and you can see for yourself what the Flats used to look like.

At Strandfontein, the first birds to catch your eye are usually the flamingos. Hundreds of them, often in large groups feeding, preening and squabbling – it’s like an East African soda lake at times. And then there are pelicans, huge African White Pelicans that fly in on wings that span over six feet, as well as dozens of wader and wildfowl species – teals, coots, stilts, sandpipers, egrets, shelducks and grebes. It is a good place for rarities too – the African swamphen, Cape longclaw and even African jacana are usually seen there – plus raptors like African marsh harrier, black-shouldered kite and African fish-eagle.

It is car-based birding at Strandfontein – the area is too big to walk around in comfort – but it is an on-foot birding experience at nearby Rondevlei.

Best visited in the early morning, Rondevlei Nature Reserve is a destination designed for the bird watcher. Photographic hides are set over water and tall observation towers give you grand views over reed beds and backwaters. Even the picnic site is rewarding – doves, shrikes and fly-catchers flit about in the trees above you, and the reserve’s thick indigenous bush is home to skulking warblers, prinias and weavers. 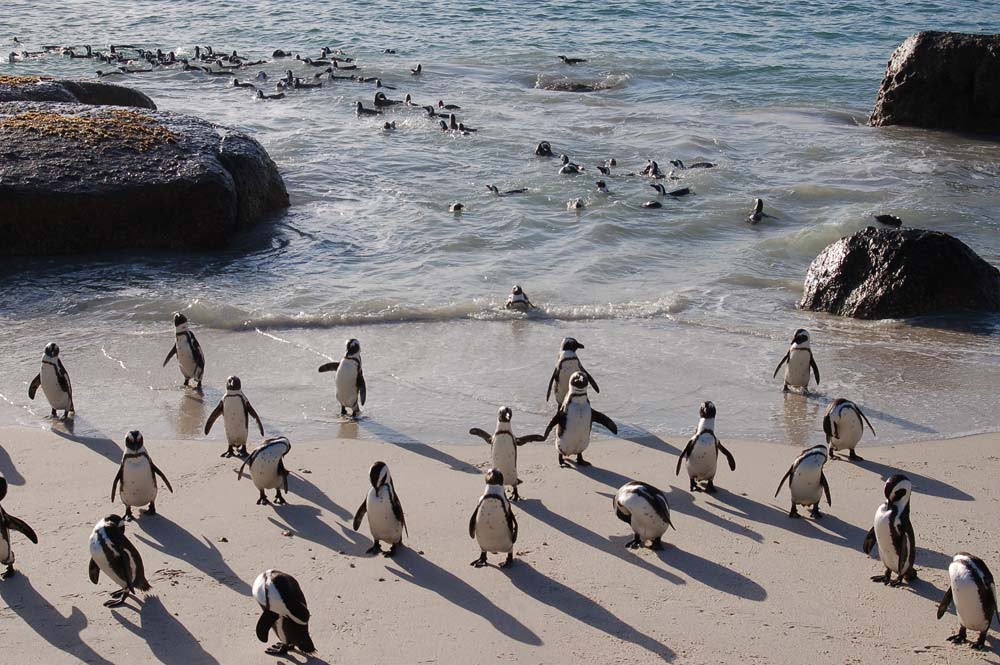 Honking like a donkey and waddling like a drunkard, the African penguin may be the star of the show at Simons Town’s Boulders Beach but birders who get there as the gates open will enjoy another side to the world-famous penguin colony.

Before they head out to sea, large numbers of cormorants share the early morning beach with the penguins. Most are Cape cormorants but there will be a few white-breasted and if you are lucky, one or two of the rarer ones – bank and crowned cormorants. Piping away among them are African black oyster-catchers, and everywhere you see the cheerful bobbing up and down of the Cape wagtail.

Boulders Beach is a good place to tick off a few seabirds too – kelp and Hartlaub’s gulls and swift tern are all there – and an amble along the wooden boardwalk that connects the colony’s two beaches usually delivers a nice set of birds – red-winged starlings, Cape bulbuls, mousebirds, sunbirds and the Cape robin-chat.