AAAAAAUUUGHHHH!! Sorry, they come out sometimes. Oh, I know lockdown is hard for everyone but remember we’re talking here about someone who was outdoors surrounded by nature every 2.2 days last year. It’s killing me. But every time my wife yells – staccato – “Will you stop scratching at the door!” I step out back into the garden and sink to my knees with gratitude that we have one. Really, I do. And if you are on your knees in my garden then there are a few surprises waiting for you – come and have a look. 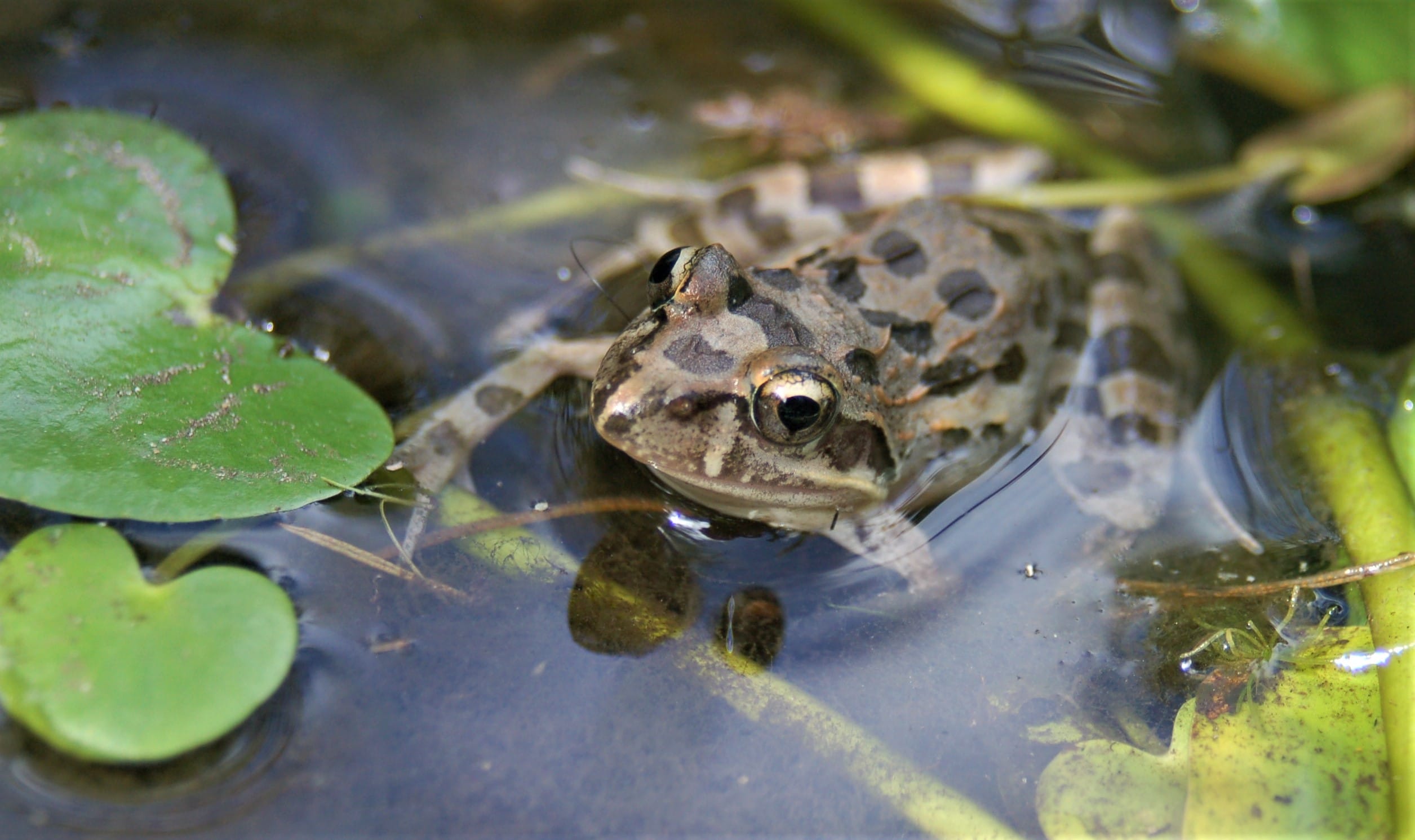 I’ve sunk basins of water to create permanent wetlands. More mosquitoes? No, fewer. These Clicking Stream Frogs (Strongylopus grayi) breed in the ponds and their tadpoles just love mosquito larva. Some mosquitoes make it to adulthood of course but they usually end up as food for the garden’s plentiful predators. Same with those horrible houseflies. We were plagued by them the year we moved in but with a garden as dangerous as mine, it pays to stay away if you’re a fly.

Forget the birds and the bees; these things do it much better. Fly, that is. Dragonflies found their niche in the Carboniferous Period over 300 million years ago and they’ve been bossing the skies ever since. Ruthless hunters, intelligent (more than dogs anyway), they have powers of flight that make aeronautical engineers frown and say things like “Run those figures past me again”. This is a type of Trithemis in a group called the Dropwings, so named for the way they bring their wings forward and down when at rest. This is a female – the breeding males are scarlet-red and fight other males to secure breeding rights over the ponds. 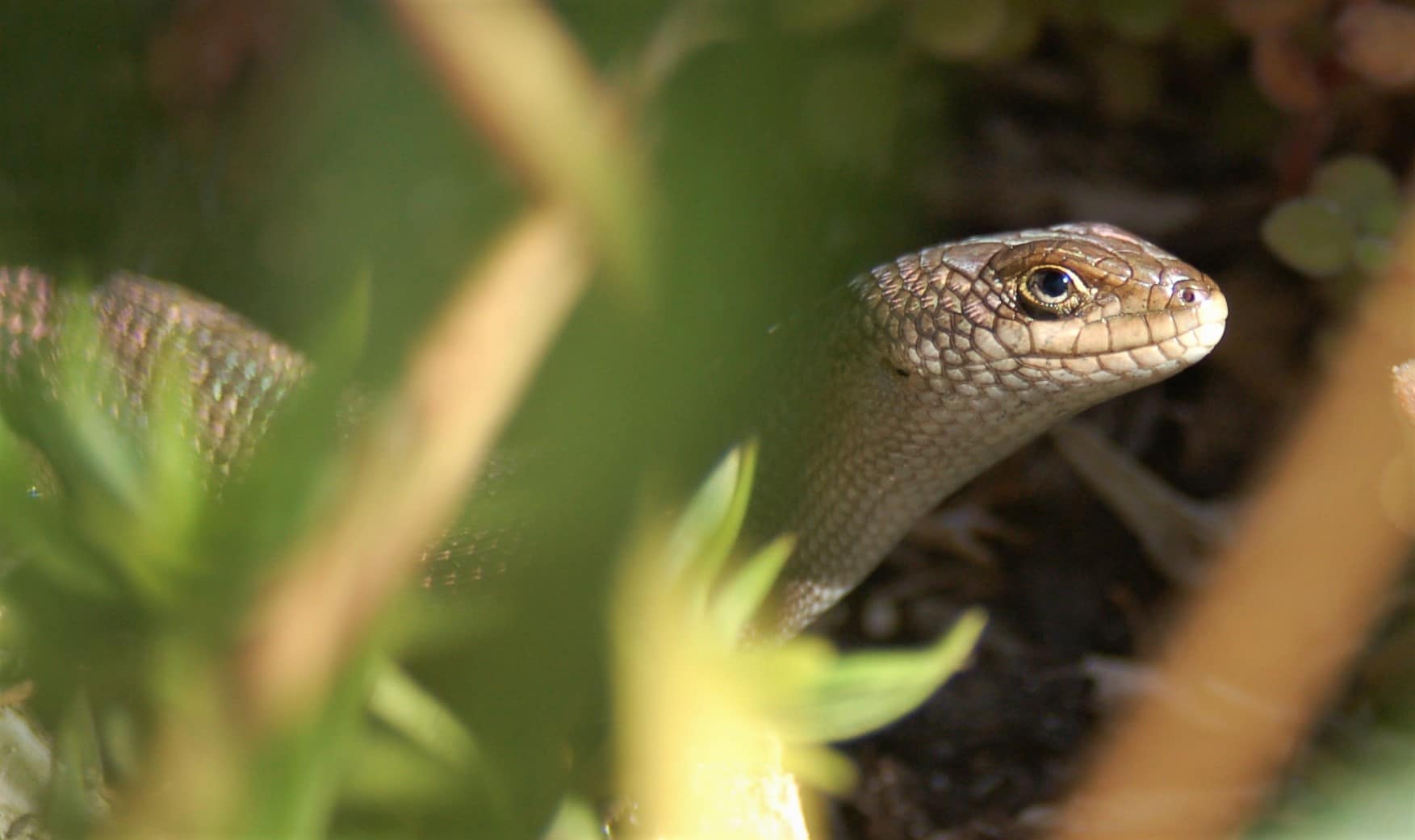 Back to the Jurassic? My garden isn’t that good. But this Cape Skink (Trachylepis capensis) is the biggest land predator around, snapping up insects as it winds its way sinuously around the fynbos. Variable in colour and pattern – some are dull brown, others multi-coloured – Cape Skinks can reproduce within their first year, and while some populations dutifully lay reptilian eggs, others (of the same species, remember) give birth to little wriggling lizards. Reference books describe the phenomenon as ‘complicated’ so we’ll leave it there if you don’t mind. 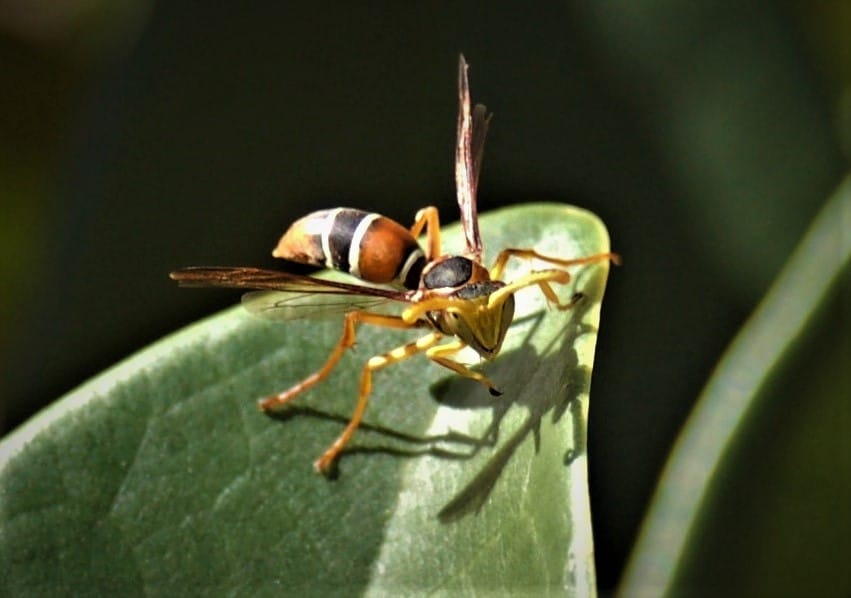 Like some ram-headed monster from Greek mythology, a Paper Wasp (Ropalidia) loses patience with my photographic blunderings and turns in a threatening stance. They do sting – painfully, as I discovered to my yelping horror – but usually only when you’ve disturbed their nest. And I can see why: it’s a work of art – an exquisitely engineered paper honeycomb, each cell of which is a razor-sharp hexagon. The wasps make ‘paper’ from chewed wood pulp mixed with their saliva and abandon the nest in late summer after males and reproductive females have been produced, raised on a fortifying diet of mashed caterpillars. Fertilised females find shelter over winter and start a new colony in spring. 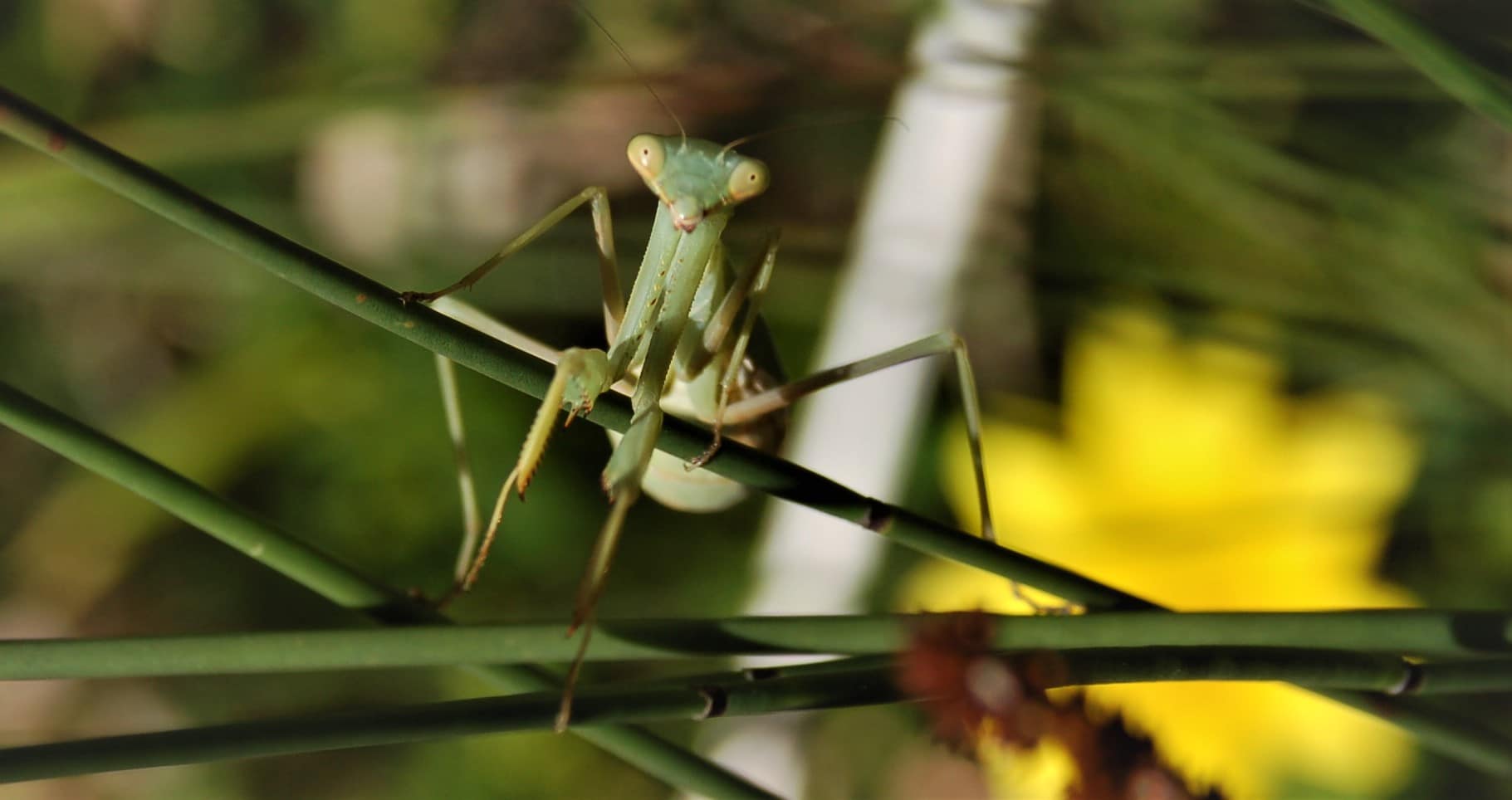 Another caterpillar hunter – which is unusual for a mantid – but this is the Giant Mantid (Sphodromantis gastrica) and well equipped to deal with such large prey. This is a female – they are much fatter than the males – and her presence in the restios (reeds) is no coincidence; I often see them there. By sticking to the reeds, they are safe from their arch-enemy and the garden’s resident apex predator, the Fiscal Shrike (Lanius collaris) – the Butcher Bird – which cannot penetrate the confusing tangle of rigid stems. It’s a survival tactic also adopted by the Cape Dwarf Chameleon (Bradypodion pumilum).

Think ‘gecko’ and you’re probably thinking of a nocturnal creature but this is a Cape Dwarf Gecko (Lygodactylus capensis) and is active during the day. It’s not much more than four centimetres long (not even two inches) but has a tail that is not only easily shed (it regrows quickly) but also has an adhesive pad on its tip to help with the gecko’s gravity-defying moves. And in case you are wondering, the gecko’s Super Hero ability to climb vertical surfaces is not due to its toe pads being sticky or having some sort of wonder-suction power, but rather to weak forces of attraction between molecules – Van der Waal’s Forces if you’d like to get technical. The gecko’s trick is to maximise the surface area between its toe pads and the wall, creating a lot of very close contact at a microscopic level.

Nature – she thinks of everything.