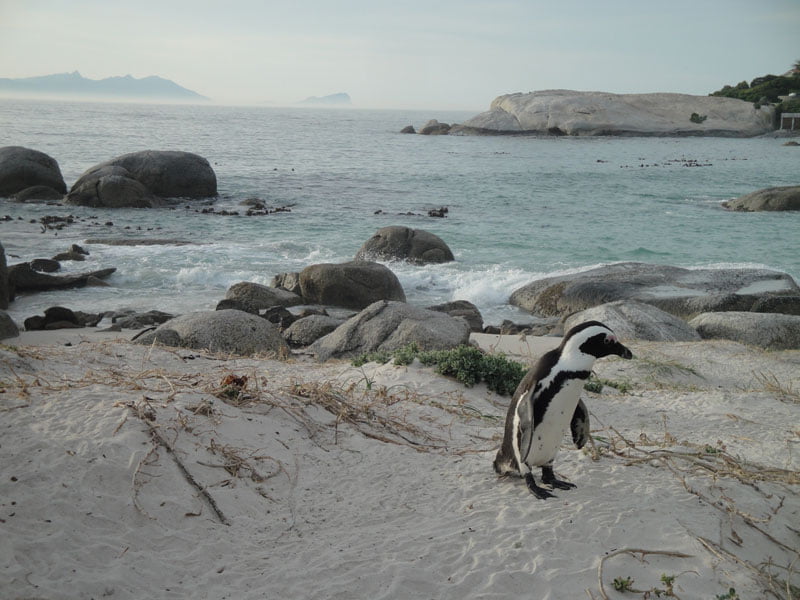 Pushed for time in Cape Town? Keen to take advantage of good weather? You can do all three of Cape Town’s best natural attractions –Table Mountain, Cape Point and Boulders Beach penguin colony – on a single day tour. And that includes a Table Mountain hike, with or without the cable car. The trick is knowing where and when to go.

I put it to the test on a crisp-edged June day with my American visitors, Kat and Lily. An early start meant we arrived at Boulders Beach as the gates opened. We were the first in and had the place to ourselves – an unusual experience at such a popular destination. We were greeted by bird song and the sight of the sun spilling over mountains and filling the air with soft light. 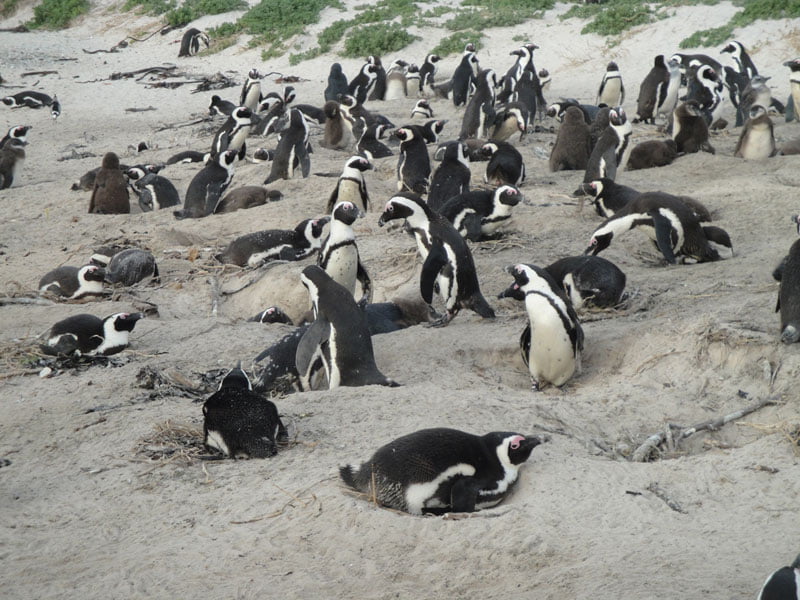 Many penguins nest right on the beach, making for easy photography.

Not that the penguins noticed. Some were busy stealing nesting material from neighbours; others were honking in the manner of an aggrieved mule (African Penguins were formerly called Jackass Penguins). Many more were making their way into and out of the ocean. And it’s once you see them in water that a penguin’s design becomes apparent. The uncomfortable waddle-walk that they endure when on land disappears the moment they go aquatic. The birds became sleek, finned torpedoes, slicing through the glassy-clear water as they headed out in search of sardines.

Boulders Beach is home to other birds too. Stern-faced seagulls loiter around the penguin nests, cormorants fly past in long straggly lines, and there are mammals as well. The sun-loving, cute-as-candy dassie resembles a guinea pig but its physiology is more akin to that of an elephant. The fossil record shows that dassies used to be pig-sized, if that’s any help. 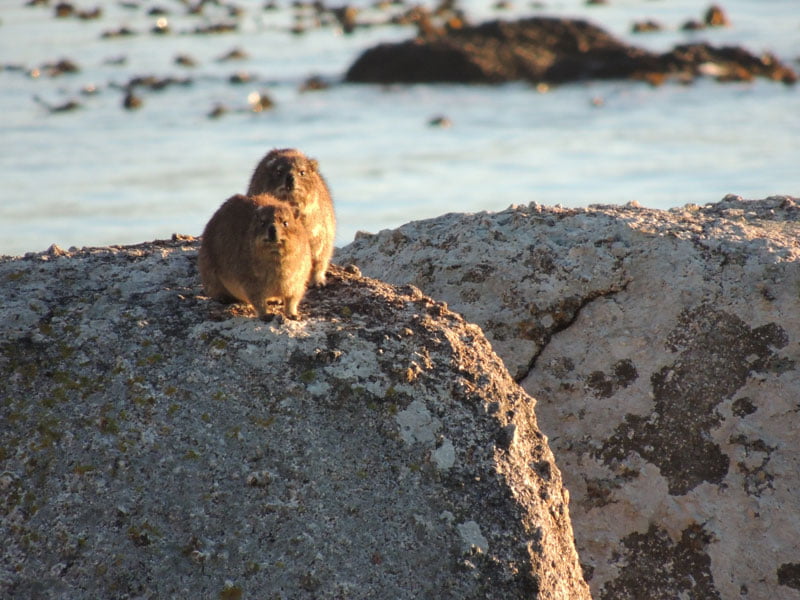 Dassies are among the other animals to look for at Boulders Beach.

Even bigger creatures awaited us at the Cape of Good Hope Nature Reserve. Bontebok antelope lifted their heads towards us as we turned off the main road to Cape Point and drove to the reserve’s Atlantic coast instead. A recent fire had given the landscape a stark appearance from a distance but the indigenous fynbos vegetation is dependent on regularly spaced fire, rewarding animals with rich grazing and botanists with dazzling flowers. 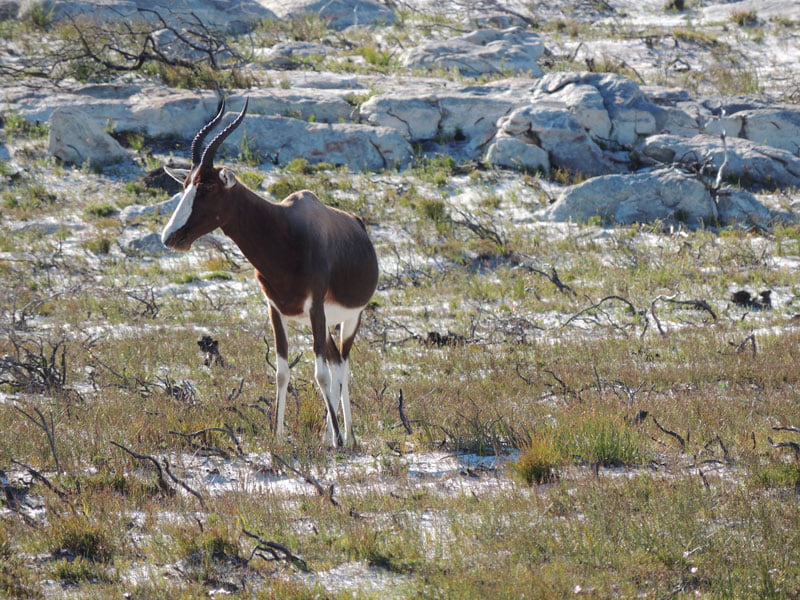 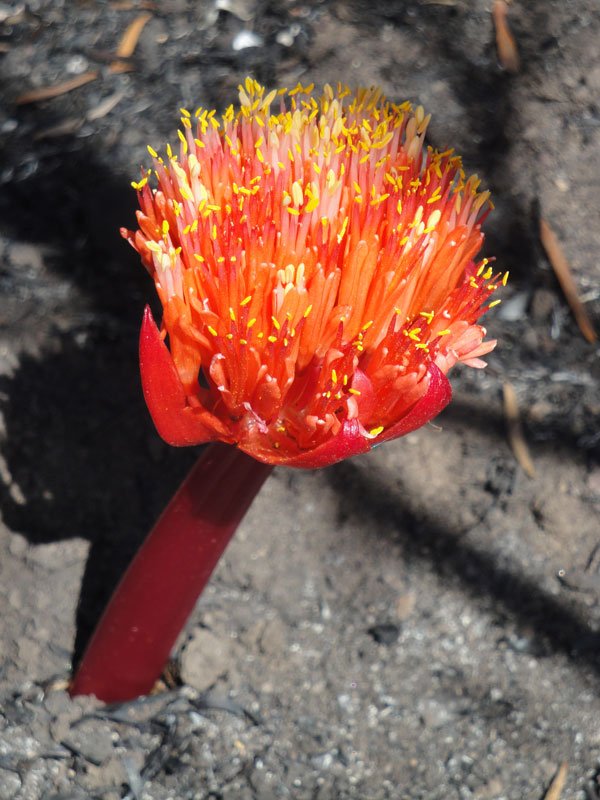 Extraordinary flowers bloom after fire – this one is a Paintbrush Lily (Haemanthus coccineus).

Over on the Indian Ocean coast of the reserve, the wildlife got supersized. An enormous glossy black slab roiled and bucked through the water, a V-shaped water spout betraying the presence of a southern right whale. And there! Her calf, tucked close beside her. Closer to shore a group of Cape fur seals floated in a lazy group, their fins stuck out in the air like the tongues of panting dogs as they cooled off after the morning’s hunt.

Back on land a troop of baboons were making its way along the shoreline. Apart from humans, no other primate on earth lives further south than these Cape Peninsula baboons. They cause chaos when they raid Cape Point’s outdoor restaurant but here they were digging up bulbs and munching wild herbs, oblivious to our company. 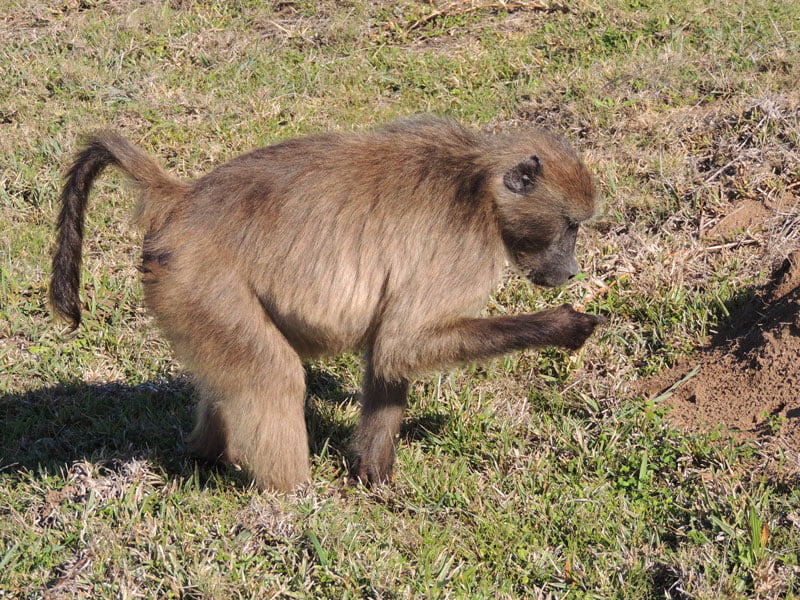 Cape Point baboons are among the very few primates to forage in a coastal environment. 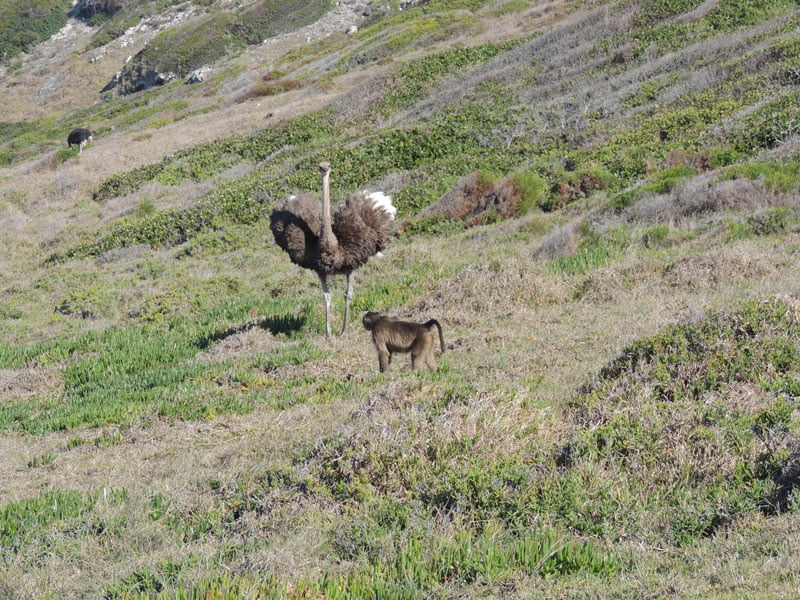 Sometimes their search for food brings them into conflict; this time it’s with an ostrich.

The sight of foraging primates made us realise we were hungry but there’s not much point setting up a picnic lunch with 30 baboons around so we headed for Table Mountain.

The world’s most famous flat-top is much admired from the city but that’s the only place you’ll see this 57 square kilometre mountain looking horizontal. Most of Table Mountain is an extravagant mix of craggy peaks and deep ravines, offering over a dozen hiking trails away from the familiar Table Top. After lunch we walked through shady forest before a steep ridge led us to the top. Colourful flowers accompanied us as we hiked – proteas and sweet-smelling honey heathers – while the views strode off in all directions, glittering oceans, tumbling cloud formations and distant mountain ranges, dusted with snow. 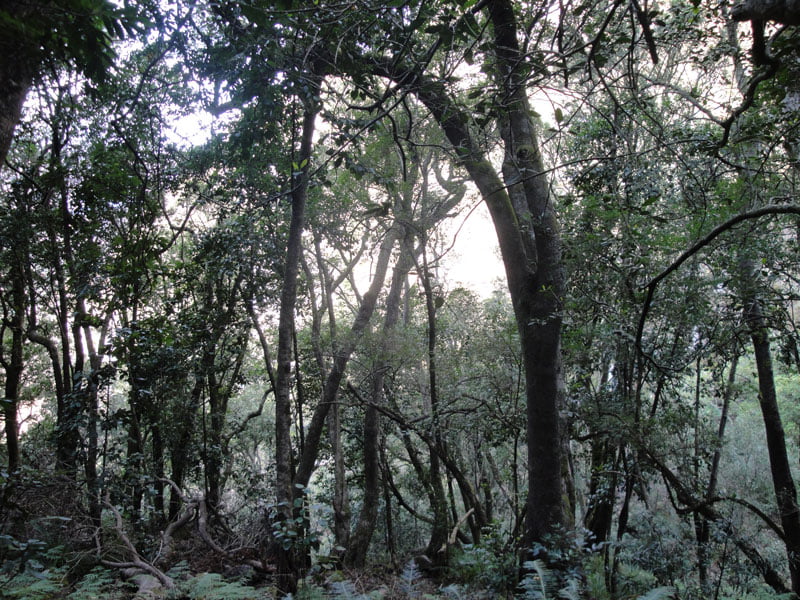 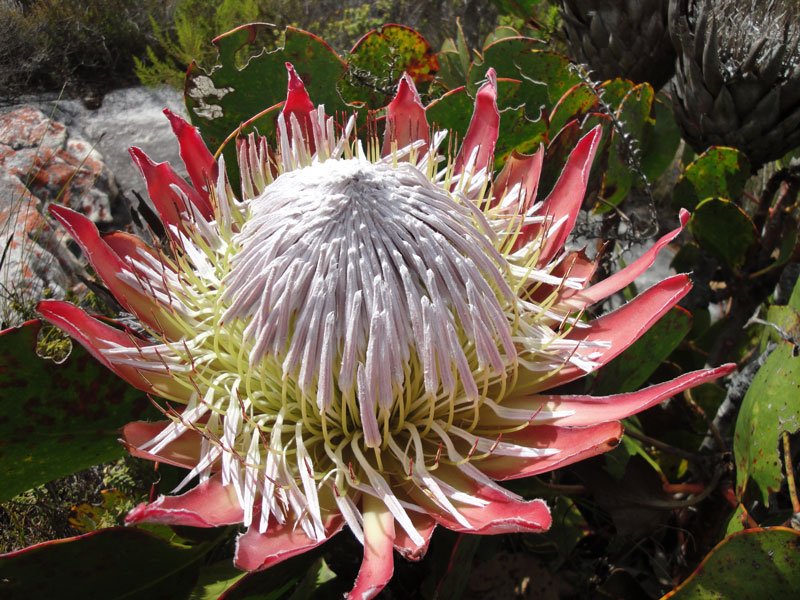 A King Protea (Protea cynaroides) provides a burst of colour as we approach the top.

It’s a long day but a good one – and there’s room for seasonal variation too. Summer days could begin with the Table Mountain hike and end with sunset at Cape Point. And then there’s the cable car option which can take you up and down Table Mountain without the huff and puff. Either way you do it, it’s Cape Town’s Big Three in One. 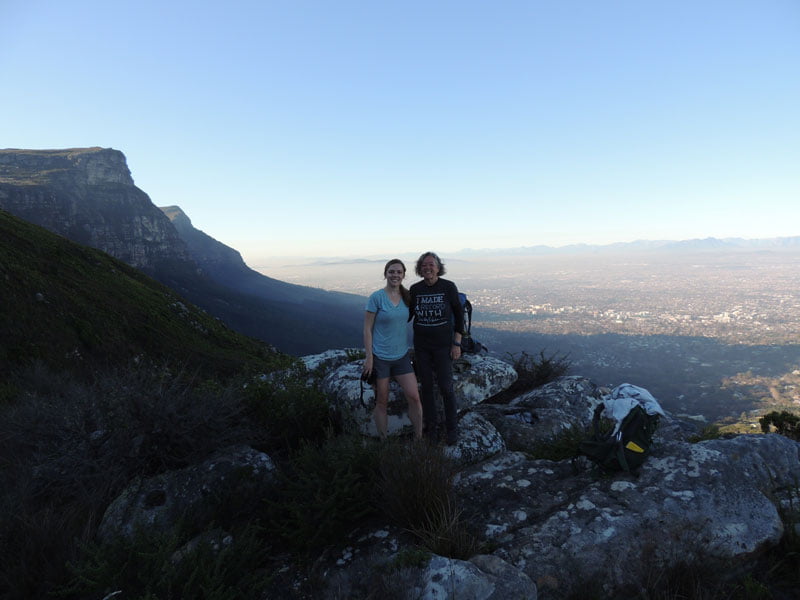