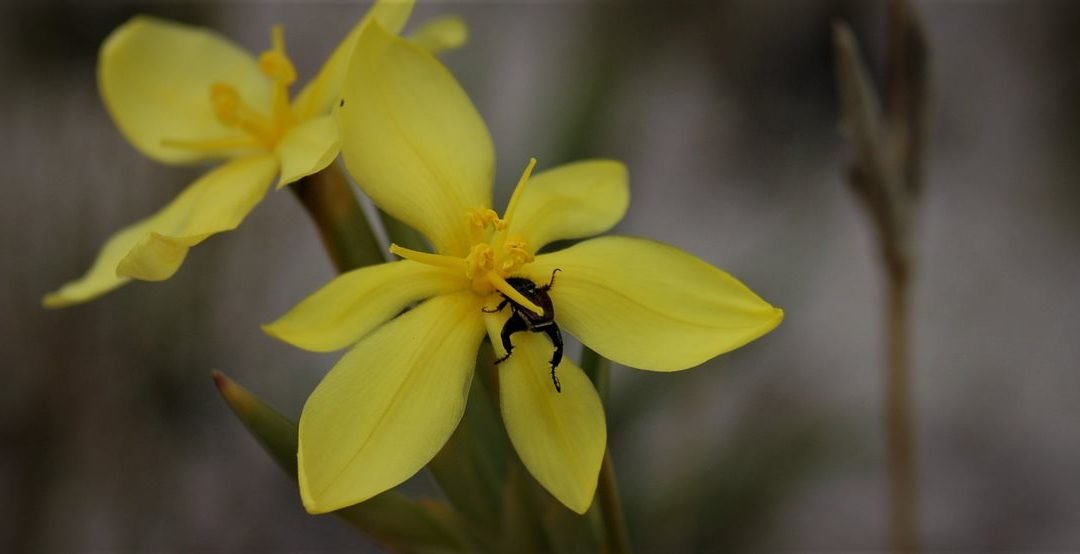 Forgive me for lowering the tone but at some stage we’re going to have to talk about it. You know, the birds and the bees – how fynbos …uhm … does it. And in plants, that means pollination. Pollination of all kinds is playing out before your eyes as you walk through the fynbos-covered Cape Mountains.

Pollination is the transfer of pollen from a flower’s male anther to the female stigma and there are two ways to do it. Some plants – usually annuals and fast-growing post-fire colonisers pollinate their own flowers (self-pollination); others are cross-pollinators, designed to deliver – via an agent – their pollen to other plants of the same species. The word ‘hybridisation’ comes into the conversation when plants from different species are pollinated – something we humans worked out 10 000 years ago and have been refining ever since.

West Coast annuals bloom early in the cold spring when insects are fewer & so self-pollinate to ensure pollination. 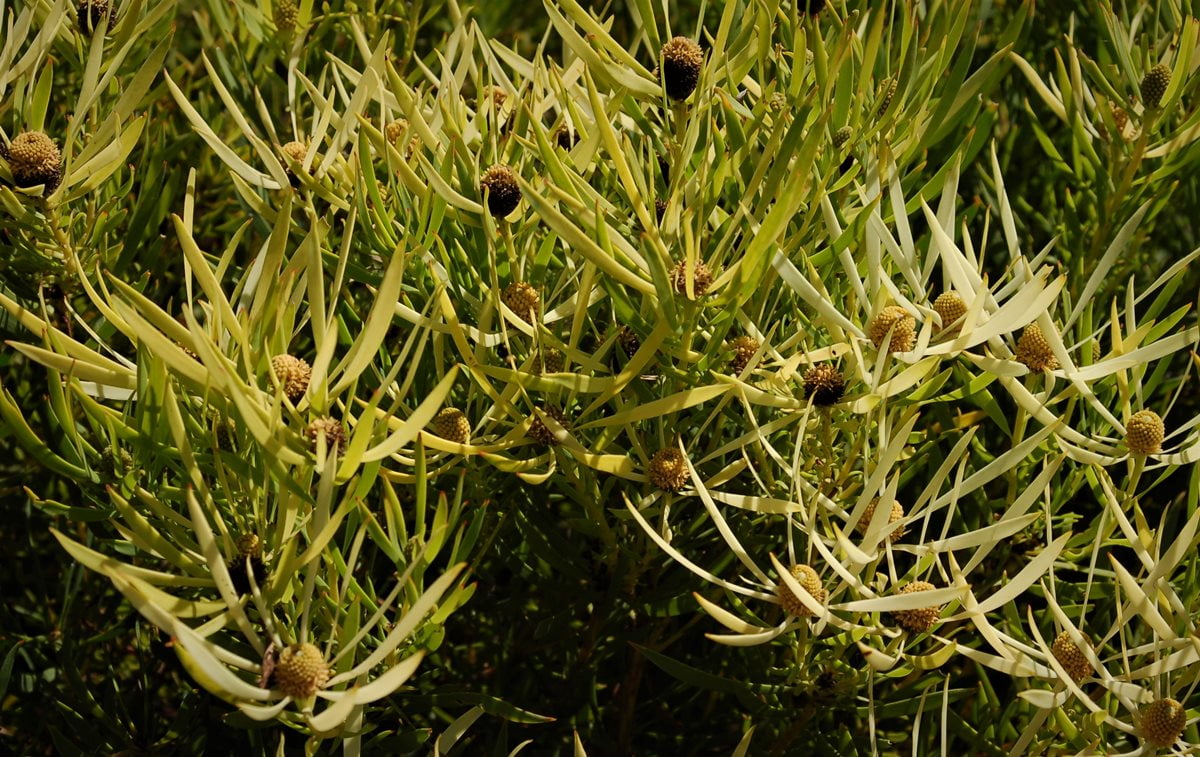 The Conebush Proteas (Leucadendron) have distinct male & female plants: the female bears the familiar cones but this is the male plant.

At first glance, however, it seems impossible that any fynbos plants get pollinated at all. Stand in pristine fynbos of dazzling diversity and the chances are you’ll hear neither birds nor bees. But adversity tends to drive innovation and fynbos plants have evolved all sorts of tricks and treats to effect pollination.

And the most obvious one is ruffling your hair as you gaze out over the silent mountains. It’s the wind. 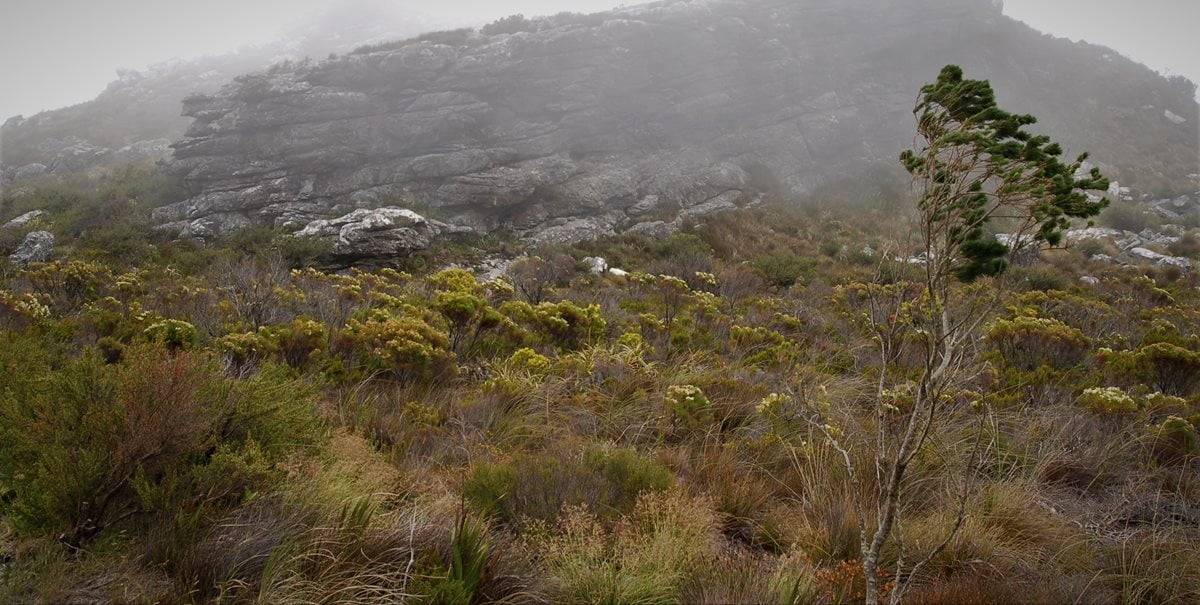 If there’s one thing you can count on as a wind-pollinated plant, it’s that there will be wind in the Cape Mountains.

Wind pollination. It’s cheap – free, in fact – and so there’s no need for a plant to waste precious resources on producing flashy flowers, attractive smells or sweet nectar. Trouble is, wind pollination is not very efficient (windborne pollen kind of goes everywhere) and such plants have to stay close to each other – forming dense, monotypic stands – to ensure better chances of catching a cloud of the stuff. 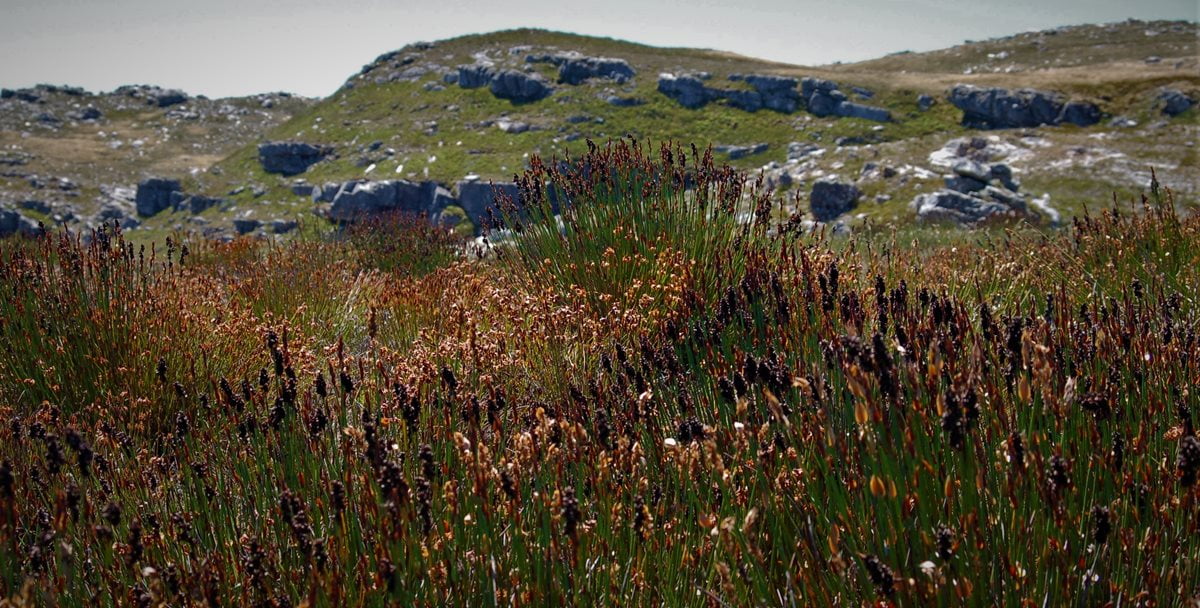 Cape Reeds (Restios) have separate male & female plants but are wind-pollinated & must live close to each other to increase chances of contact.

And so, despite the seemingly never-ending supply of wind in their environment, only around 12% of fynbos plants are wind-pollinated. Most fynbos plants do indeed use birds and bees – or animals of some kind. And these pollinating agents are more prevalent in fynbos than was revealed in that first glance you took a few paragraphs ago. The Cape Peninsula, for example, has more butterfly species in its modest 70 kilometres than does the British Isles, and even storm-battered Cape Point has recorded nearly 250 bird species.

But, thanks to the low carrying capacity that these mountains have for animal life, these seemingly impressive statistics obscure the reality which is that there are relatively few animal pollinators in fynbos – in actual numbers of individuals. One of the consequences of this is the great explosion of floral diversity: with few available pollinators, fynbos plants seek desperately to outcompete each other with evermore elaborate and unique designs, morphing into separate species as they focus on attracting the attention of – say – a certain fly or wasp, itself perhaps a highly localised creature.

Emblematic to fynbos, the Red Disa (Disa uniflora) stakes everything on the Table Mountain Beauty butterfly (Aeropetes tulbaghia) – it’s the orchid’s only pollinator.

Some fynbos plants are designed for either bird or insect pollination but there is generally a big distinction between bird-pollinated plants and those that are insect-pollinated. Insects tend not to notice colour very much – or at least bold, bright colours – and are instead attracted to lighter tones – whites, yellows, pinks and baby blue. Insects also find smells irresistible and so if you come across a pale-coloured flower with a distinct scent then you can be pretty sure it is insect-pollinated.

(The scent, of course, is designed for the pollinator: to attract Cape Honey Bees, the Honey Heath (Erica ericoides) smells like – well, you can probably guess – but you’ll flinch at the scent of the Starfish Lily (Ferraria crispa) which lures carrion flies to its flesh-wound of a flower by producing the distressing smell of putrefying meat.) Drawn to pale colours like a magnet, a Honey Bee, loaded with balls of pollen, feeds from a Threadleaf Brightfig (Lampranthus filicaulis).

Interestingly, the ability to deliver an irresistible smell has been taken a step further by several dozen members of the Protea family. Their low-lying, cryptically coloured flowers are well hidden from sharp-eyed birds but by producing the pungent aroma of fermenting yeast, the flowers of the Common Ground Sugarbush (Protea acaulos) attract rodents and elephant-shrews. The ever-twitching noses of these mammals are dusted with pollen which is then transferred between flowers but they are rewarded with nectar – and not just any old nectar but one full of rich, slow-release sucrose. Compare that with the nectar of bird-pollinated plants, loaded with super-sweet fructose and fast-burning glucose, ideal for sudden high-energy flight. Sugar-hungry ants burgle the flowers of Protea acaulos, a species that relies instead on mice & shrews for pollination.

Bird pollinators, on the other hand, operate quite differently to insect or mammal pollinators. Without a keen sense of smell but blessed with excellent vision, birds are attracted to bright colours – reds, deep oranges and purples – and so fynbos makes it easy for them. Witness the bright golden flames of Wild Dagga flowers (Leonotis leonurus) and the crimson curl of Erica mammosa, their arched tubular flowers matching the curved line of a sunbird’s beak like a scimitar in its scabbard. Visiting up to 300 flowers a day, the Cape Sugarbird (Promerops cafer) is a keystone species in the reproductive health of fynbos.

So far, so good. The flower gets pollinated and the pollinating agent is rewarded with nectar – everyone’s a winner.

But, as you know, things don’t always go according to plan. Flowers are constantly raided by animals that are not their pollinators but who have come instead for a free lunch. Many insects eat pollen rather than transfer it and short-beaked birds like Cape bulbuls and Cape white-eyes peck holes in the sides of long tubular flowers to drink the nectar before the sunbird can. It get worse; baboons and ostriches pick and eat flowers, and up until 100 years ago, humans would drain nectar from the Sugarbush (Protea repens) in such quantities that an entire industry grew up around it. 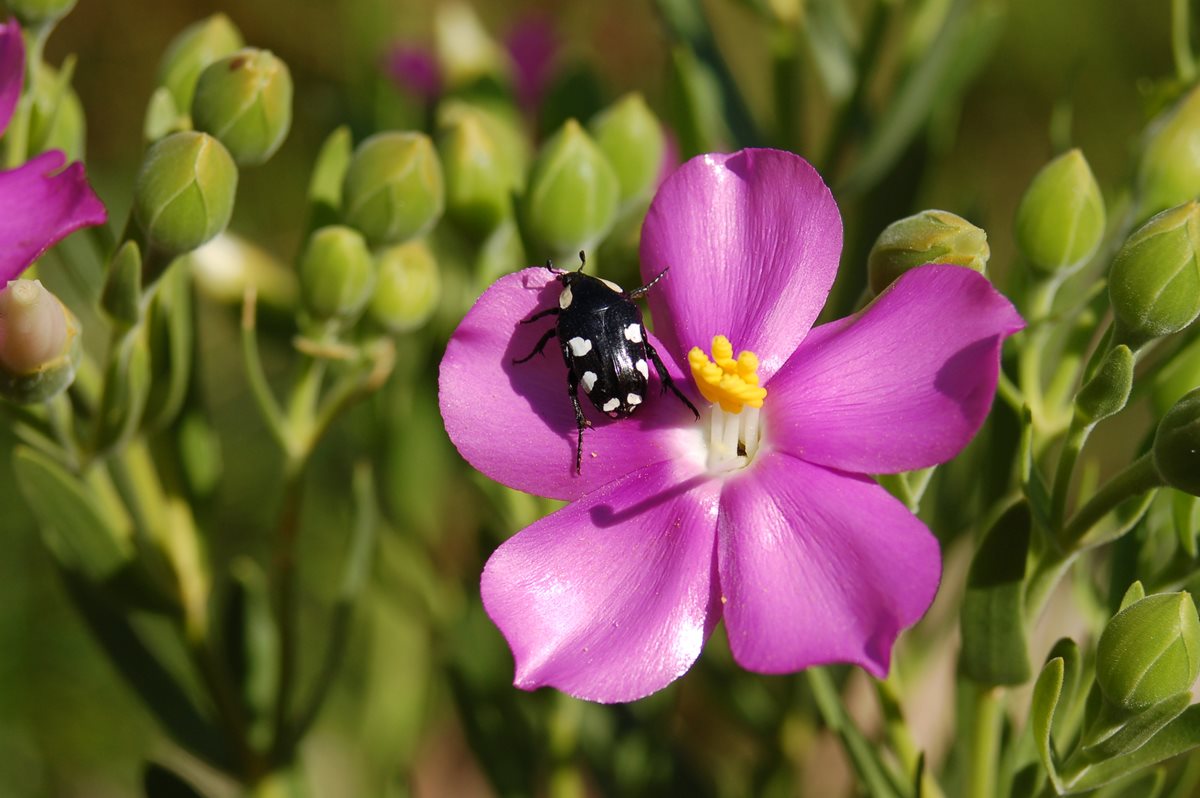 Wrong insect: the Sea Rose (Orphium Frutescens) is pollinated by Carpenter bees (Xylocopa); this White Spotted Fruit Chafer (Mausoleopsis) is here to see what it can find to eat.

And then there are – inevitably – the cheats. Even in the plant world there are those who take a short cut and rely on someone else to do all the hard work. The fynbos is full of orchids that mimic other plants in appearance or – somewhat incredibly – impersonate the females of certain insect species through design and even smell. By enticing in an unwitting pollinator – seeking nectar or a mate – these orchids hope for a quick pollination before the butterfly or wasp realise the truth: there is no reward – no nectar. And no receptive female wasps either.

It’s a high-risk strategy and one that is not as common in fynbos as it is in similar Mediterranean-type biomes, perhaps because fynbos is so poor in nutrition. Pollinators have to constantly visit flowers in their search for food and consequently it’s difficult for mimics to get established in an environment of constantly being checked out – someone will eventually work out the con. Tritoniopsis triticea is a late summer-flowering Iris that rewards its butterfly pollinators with nectar. 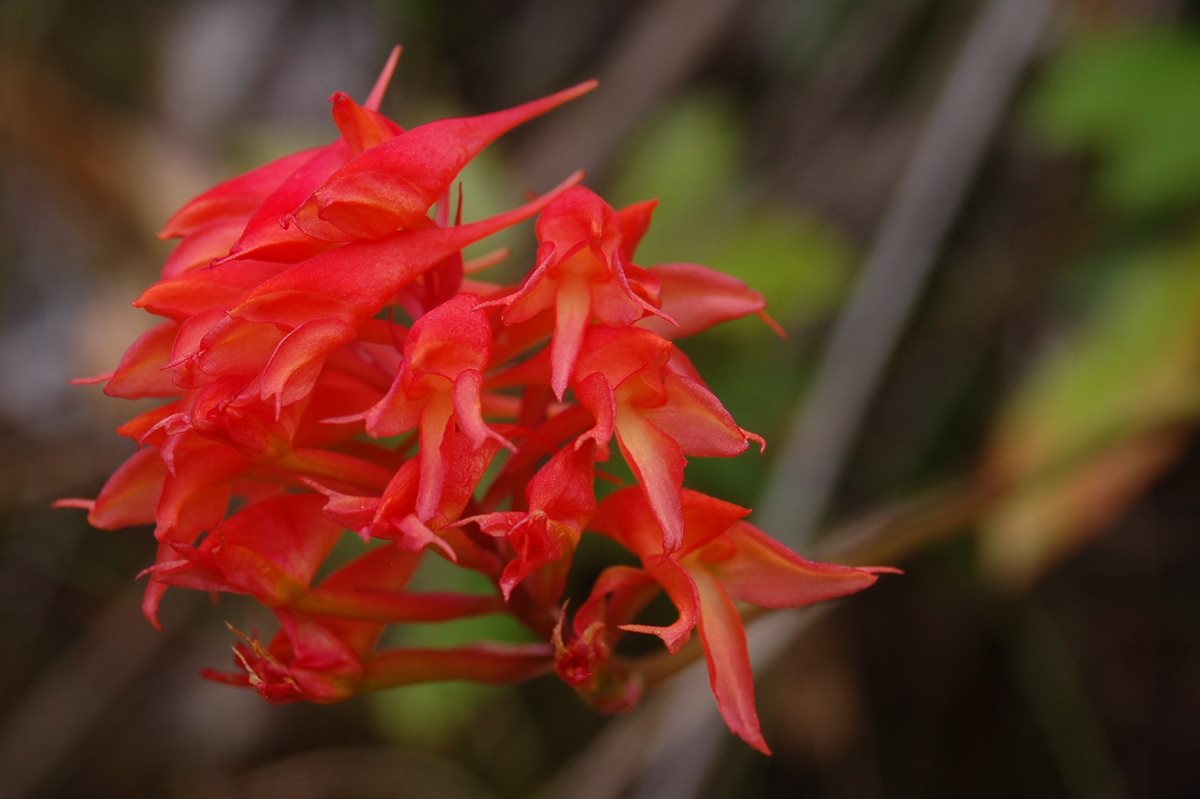 The Cluster Disa (Disa ferruginea), an orchid that flowers at the same time, has no nectar but mimics the above Iris to dupe butterflies into thinking that it does.

Is the future of fynbos pollination safe? Hard to say at this stage but we can probably assume insect populations are decreasing though probably not as precipitously as they are in North America and Europe. Having said that, an outbreak of alien foulbrood disease ten years ago killed around 40% of Cape Honey Bees (Apis mellifera capensis), illustrating just how vulnerable endemic species can be.

Bird populations are likely to be in similar decline as habitat loss continues, either to developers or alien vegetation, and the consequences of shrinking animal populations will have a serious effect on fynbos diversity.

The afore-mentioned Table Mountain Beauty butterfly, for example, is not just the sole pollinator of the Red Disa but is individually responsible for pollinating at least 15 other fynbos plants. And the cheerful chirp of the Orange-breasted Sunbird (Anthobaphes violacea) is one that needs to ring out over the mountains: this hard-working version of a hummingbird visits – and pollinates – over 100 different kinds of Erica (heather) in its constant quest for nectar.

For the sake of fynbos, let’s hope the birds and bees continue.