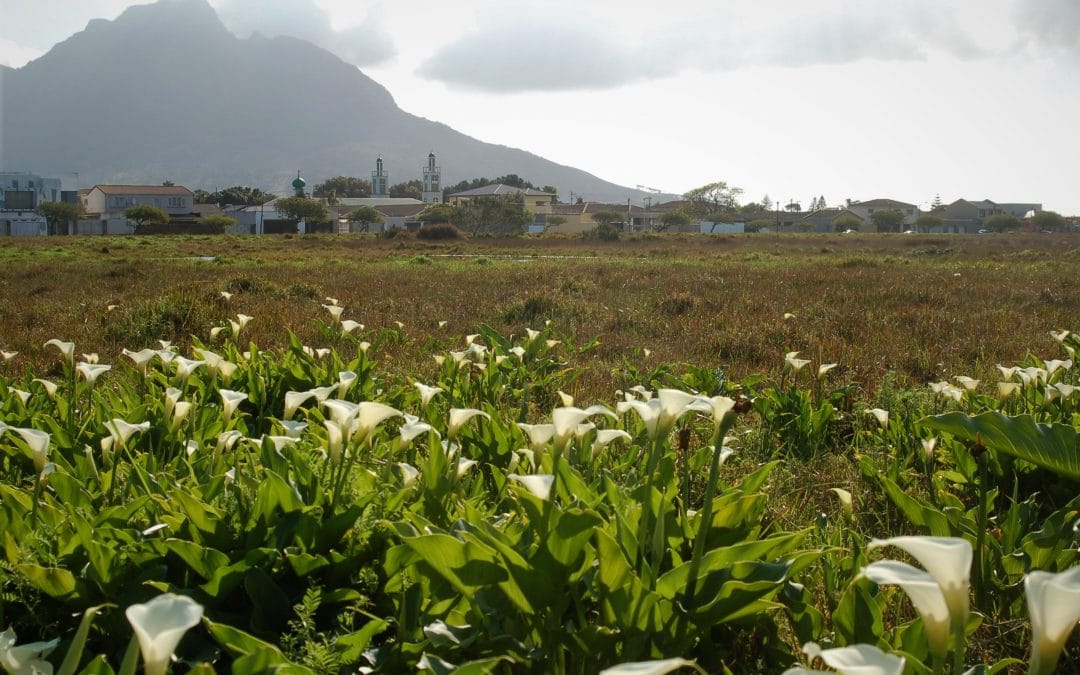 And suddenly there it was. Like discovering a grove of wild woodland on London’s Oxford Street. A patch of Cape Flats Sand Fynbos just around the corner from my house. It survives on a boggy corner of my local common – too wet for the tractor to mow – and I sploshed into it by mistake, taking a short cut on the way to fetch the car from the garage. There were flowers in pink, yellow, orange, white and purple plus birds that I usually only see at nature reserves and a couple of the world’s rarest plants. All there, the planet’s most critically endangered vegetation type, just a few hectares hemmed in by housing.

You need waterproof boots to see it in the rainy winter months – the standing water is deep enough for ducks – but that’s when Cape Flats Sand Fynbos is at its best. And to save you the hassle of squeezing into those old rubber boots, I put on a pair and grabbed a camera. Here’s what I saw. 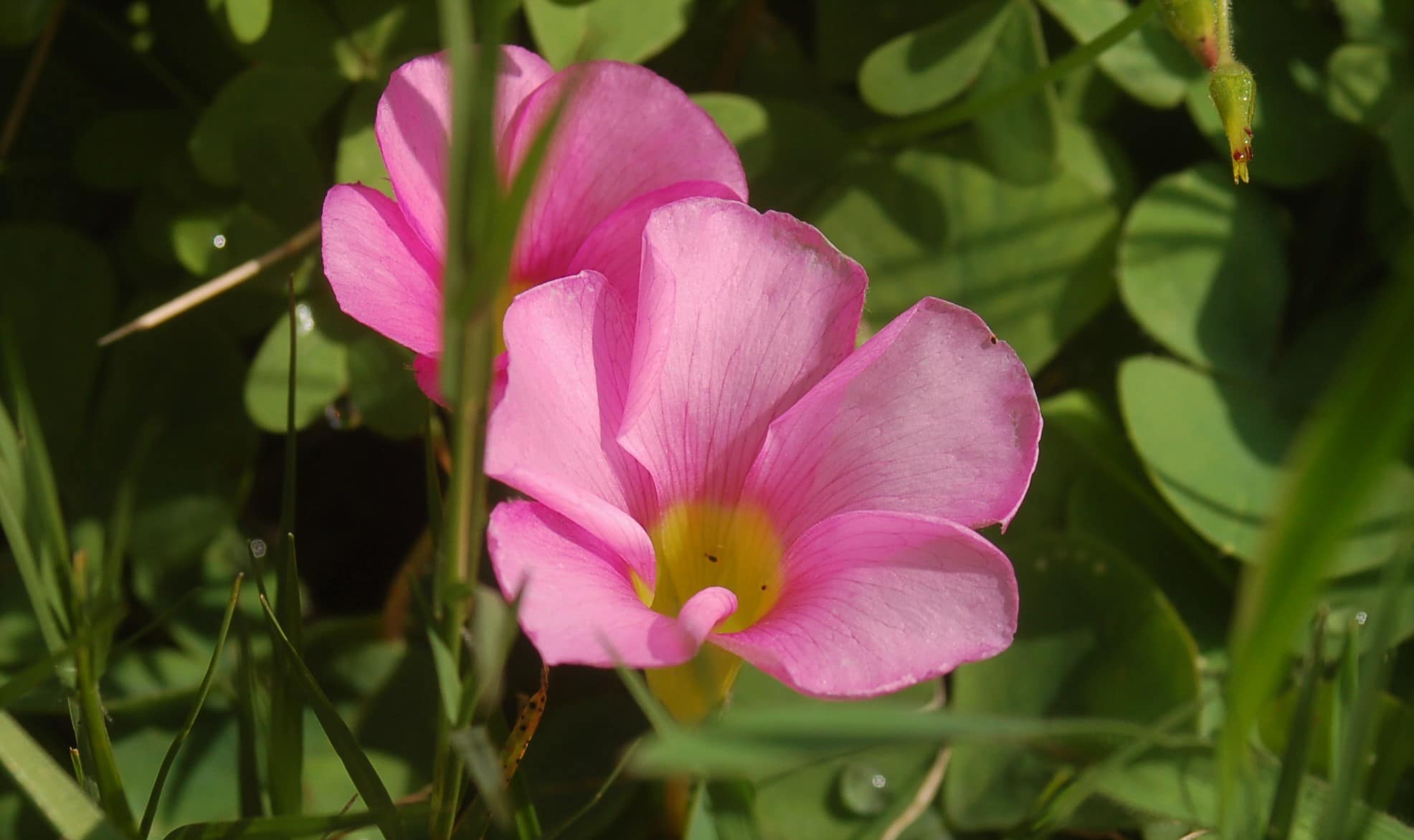 The first flowers you notice in Cape Flats Sand Fynbos during winter are various types of Oxalis. Known collectively as Sorrel and popping up from a small bulb, they spend the dry summer underground (their roots contract and drag the bulb down deeper into the sand) but they explode into brilliance once the rains begin. The one above is Oxalis purpurea and if you munch the stems you’ll see why it’s called Oxalis; it’s from the Greek word oxis which means acid, and some species were once eaten for their oxalic acid content – Vitamin C in effect – as a treatment for scurvy. 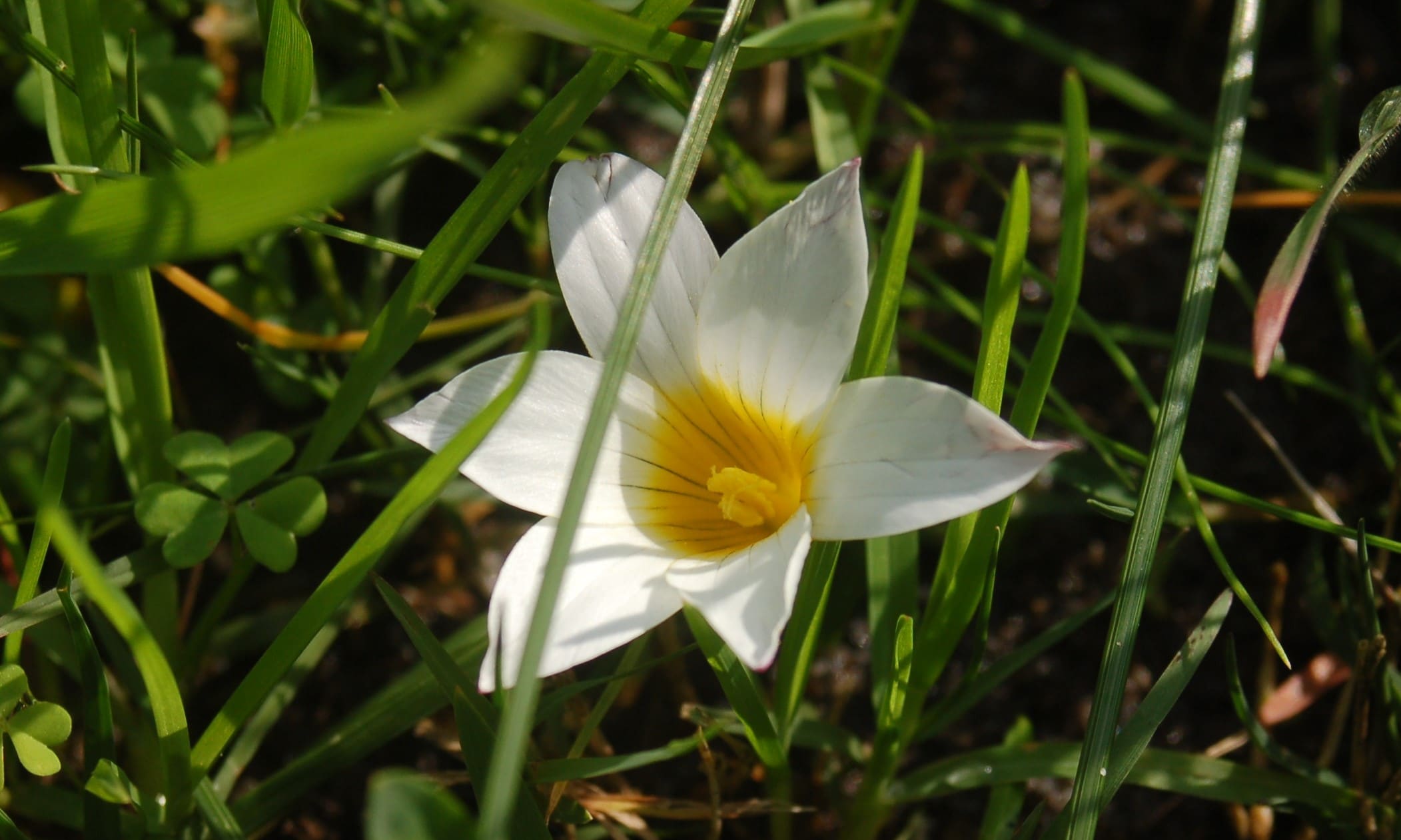 Romulea flava is in the Iris family and like other genera in the family – Watsonia and Gladiolus for example – the Romuleas were once part of our diet. Their common name in Cape Town is – or perhaps was – ‘Froetang’ or ‘Frutang’ which is a Malay corruption of the Portuguese word for fruit – ‘fruta’ – and indeed the plants’ young fruits were harvested and eaten – especially by children as a sweet snack. 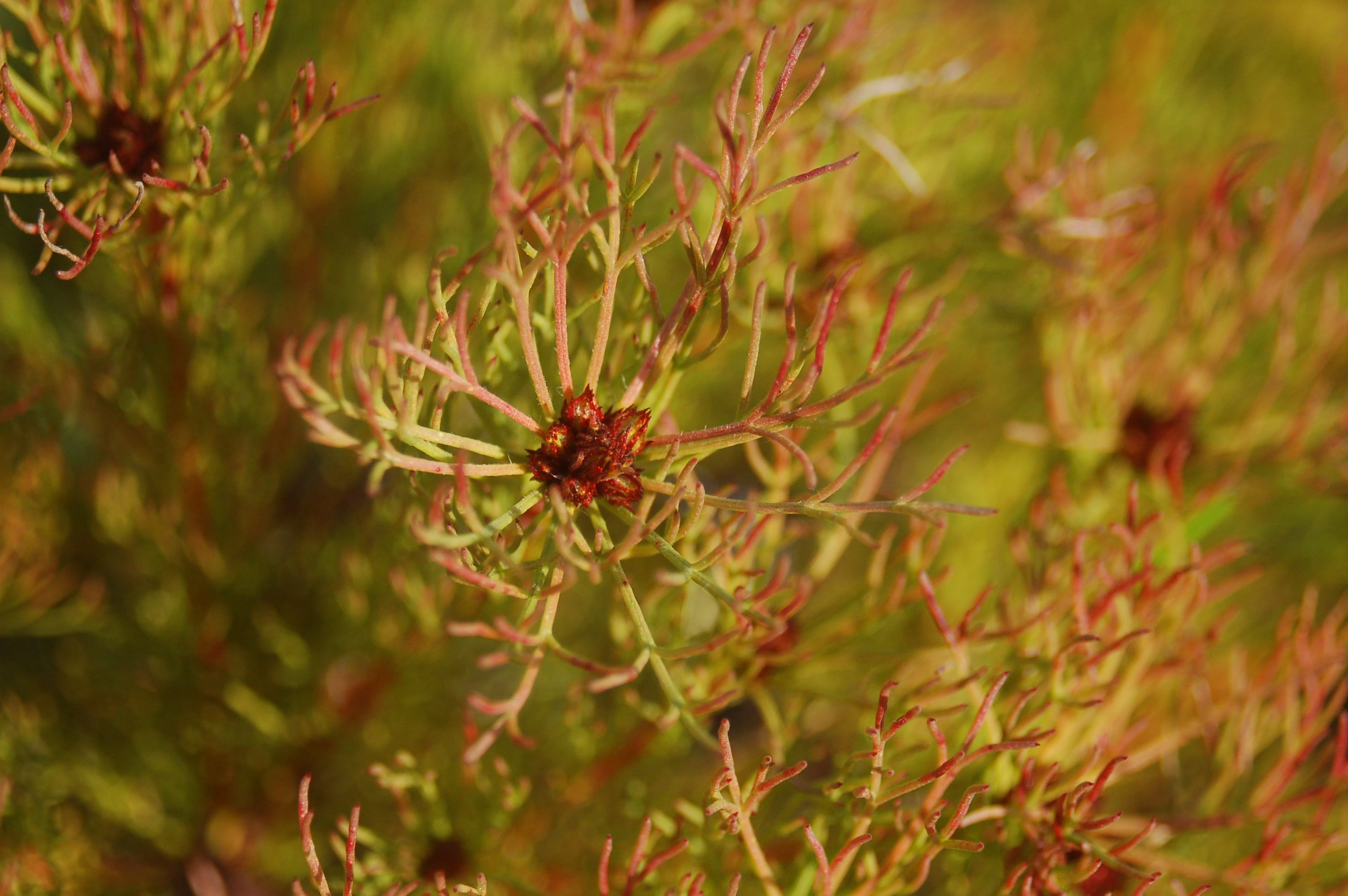 Once carpeting the Cape Flats and now confined to a few reserves and forgotten roadsides, Serruria aemula is in the Protea family and goes by the name of the Strawberry Spiderhead. There were four bushes that I could see – each getting ready to flower in a couple of months. I’ve not seen it anywhere else in the wild. Plants in the Serruria genus are known as the Spiderheads thanks to their intricately divided, silky leaves which look a little like spider webs. 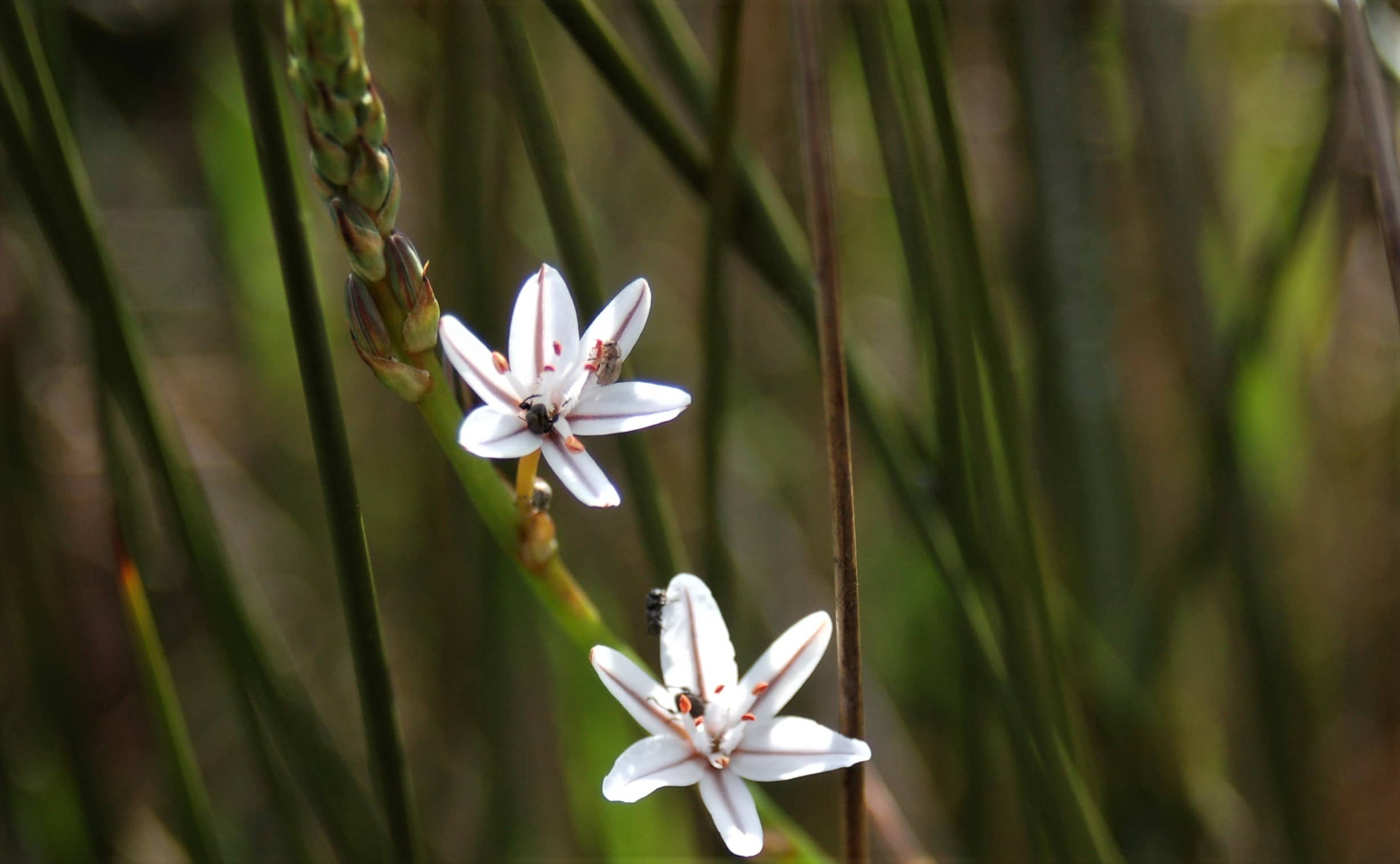 Another plant that used to sit on the dining table. This is Trachyandra, in the Aloe family and known in the old days as Veldkool (felt-koel) – ‘field cabbage’. Back then, the young flower stalks were harvested before they flowered and boiled or steamed like asparagus. When they do open the flowers are pleasantly scented – that’s why the ones above are covered in insects such as the monkey beetle – but only last a day.

Dips and depressions on the common fill up with winter rain and provide habitat for unlikely visitors, given the suburban surroundings. This pair of Yellow-billed Ducks kept a pair of wary eyes on me but the Red-billed Teal didn’t let me get close. Cattle Egrets, Blacksmith Lapwings and Egyptian Geese patrolled the water edges and I saw Levaillant’s Cisticola – an attractive wetland warbler – as well as its grassland cousin, the Zitting Cisticola – famous for its zit – zit – zit song as it bounces through the air. Step a few metres – quite literally – to either side of this patch of wild fynbos and you are back to feral pigeons and seagulls. 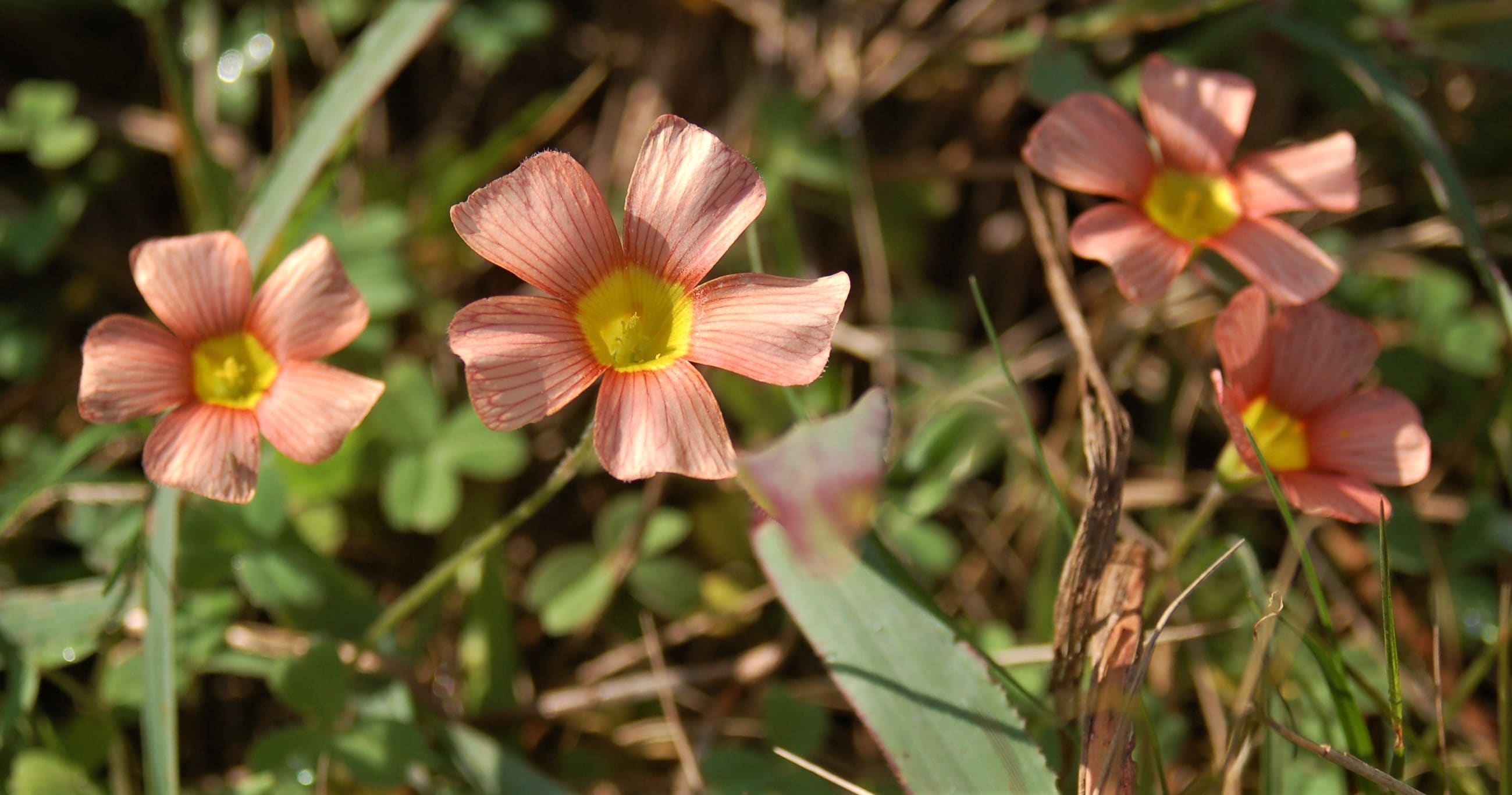 Oxalis obtuse has a name in Afrikaans that sounds like you’re slurping down an oyster: Geeloogsuring – Yellow Eye Sorrel. It’s a plant that likes clay and granite soils and so was on a bit of higher ground away from the sandy marshland. The sudden change of plant species within footsteps is commonplace in fynbos – indeed, it is part of what makes it such a bizarrely diverse vegetation type. Tropical rainforests may have more plant species per hundred square metres but nothing changes as quickly and dramatically as fynbos does as it snakes up and down mountains or across kinks in the coastline. There are more plant species on the Cape Peninsula than there are in the British Isles and a similar number exists on the other side of False Bay, a 30-minute drive away but fully 50% of these plants are different to those on the peninsula’s list. 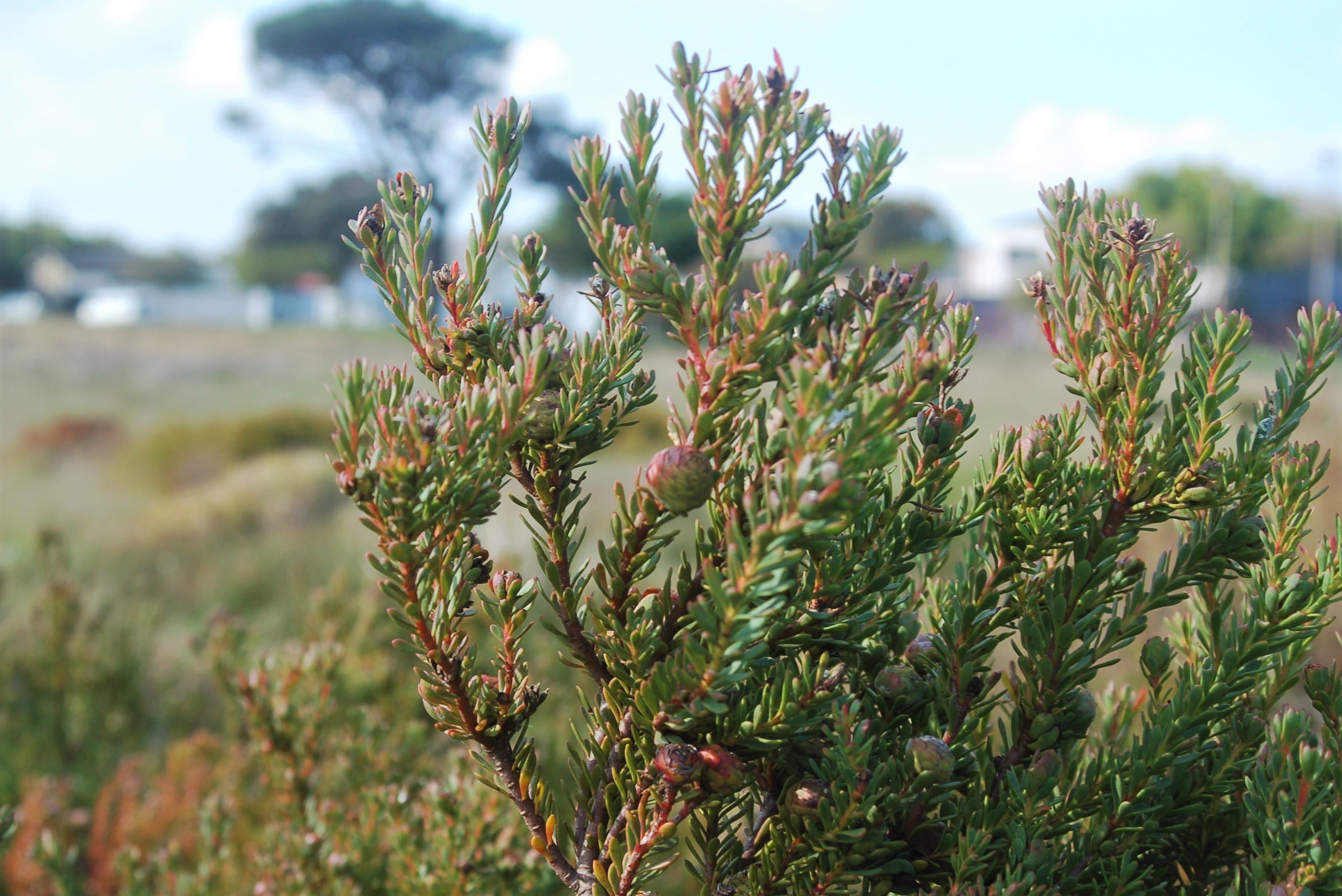 The star of this show is probably Leucandendron levisanus – the Cape Flats Conebush. Once common around Cape Town, its biggest populations now stand forgotten beneath electricity pylons and in a nature reserve surrounded by a racecourse. There was only one plant here. Given that Leucandendrons require fire to crack open their cones for seed dispersal, it seems unlikely that this one – despite its robustness – will reseed this patch. 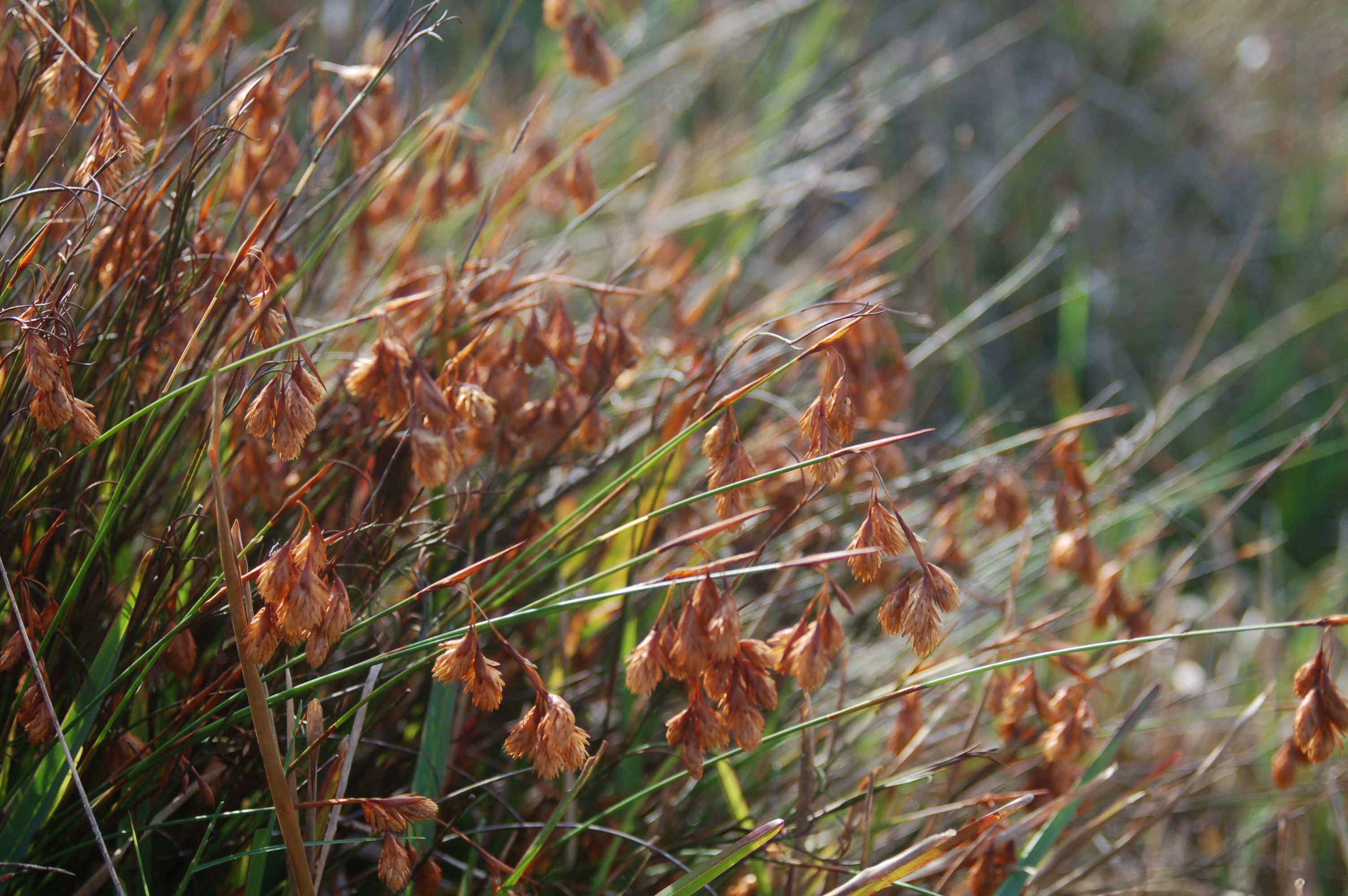 It can’t be fynbos without some of these – the Restios or the Cape Reeds, a plant family that underpins the fynbos ecosystem. From mountain top to coastal dune, there’ll always be a restio – think of them as the grass of fynbos. This is Staberoha banksia and those hanging spikelets (the ‘flowers’) indicate it’s a male. Wind-pollinated, the Restios have evolved so that the male flowers hang down like a pendulum and shake out their pollen on the wind, whereas the female plants generally have erect spikelets to catch the stuff drifting by.

I could have filled up a shopping bag on this trip. This is Aponogeton distachyos, the most famous edible plant from the fynbos region and better known as Waterblommetjie (vater-blomi-key) or Pond Blossom. Its edible fruiting spikes are a classic ingredient in several traditional Cape dishes – the tastiest is as part of a lamb stew – but I suspect the indigenous Khoisan used it long before the Europeans arrived. Its survival trick is an ability to patiently sit out the Cape’s summer months when these wetlands dry up – a seasonal wetland here is called a vlei (pronounced ‘flay’) – just as the neighbouring protea bushes can withstand the winter months sitting in water.

A rarity made me go “OOO!” It’s Lampranthus filicaulis, part of the family that contains the common Sour Fig (Carprobotus edulis) which is ironically a major invasive pest in California. This one, however, has seen its population plummet by 30% since the 1970s. And just to prove that there is always an exception to the rule that Afrikaans Has Better Names for Plants than English, this is a Vygie (‘fay-ghee’) in Afrikaans but in English, it sounds like a Tolkien character: Threadleaf Bright-Fig. 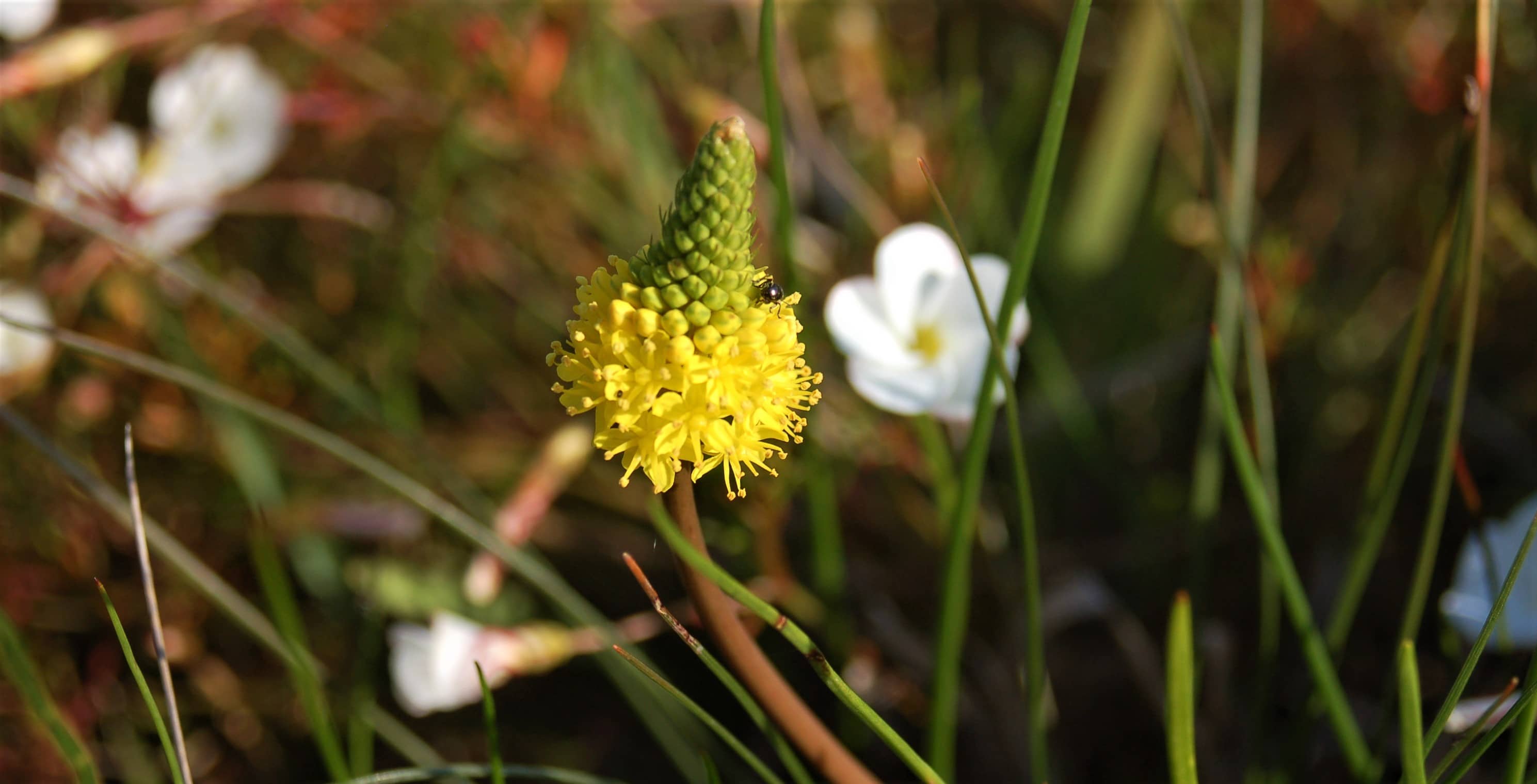 Like a tiny yellow sun amid a green cosmos, a single Bulbine stood out. It’s in the Aloe family and has inherited the healing properties of its internationally famous cousin – Aloe vera (a North African species). The leaves of many Bulbine species contain the familiar sticky gel once widely used to soothe sunburn or skin rashes as well as an antiseptic. The bright yellow is irresistible to insects and sure enough, there were a pair of shiny beetles chasing each other around the flower head. Making hay while the sun shone – and they were not the only ones.