CAPE POINT NATURE RESERVE: WHAT YOU NEED TO KNOW Before we get started I’d better issue a disclaimer: Cape Point is the most weather-exposed part of the entire South African coastline, reeling under gale-force winds for 100 days of each year. Its original, pre-marketing name is the Cape of Storms. Don’t plan a wedding there and if you’re unable to open the car door because it’s too windy, you can’t say you weren’t warned. The Cape Point scenery is magnificent: huge, unspoilt views of mountains, sky & ocean from all parts of the reserve.

But catch it on a day when the weather behaves like it should at the Fairest of Capes and you’ll see why the Cape Point Nature Reserve is one of the most biologically diverse and oh-my-gosh rewarding of any conservation area you’ll ever visit. It is home to more plant species than Sweden, provides sanctuary for some of the rarest animals in Africa, and boasts one of the richest coastlines in the world. 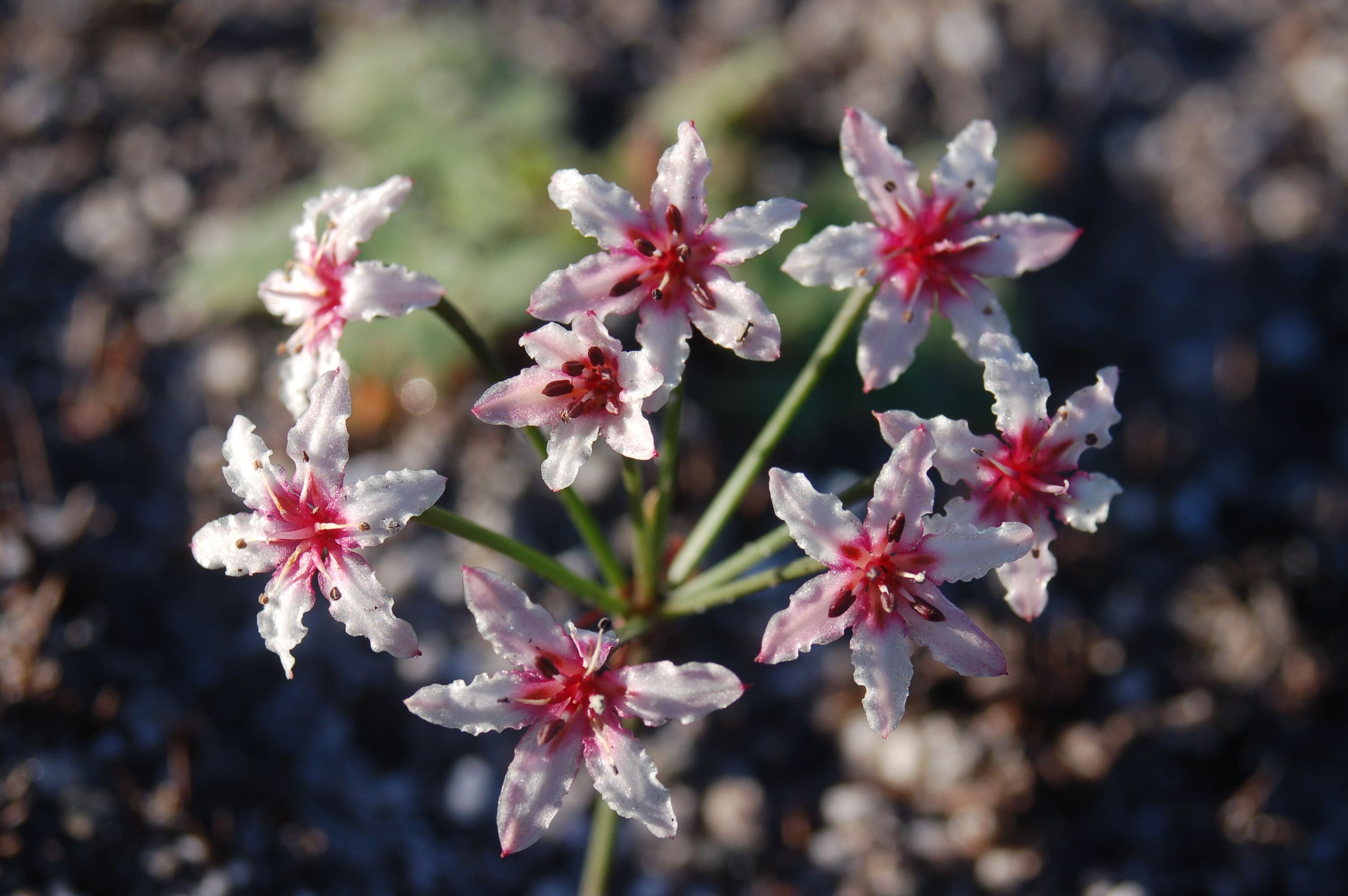 A fynbos fire in January triggered a mass flowering of Hessea cinnamomea five months later. Once common but now almost criminally-rare, it’s an Amaryllis with an Afrikaans name that translates as Little Umbrella.

Let’s clear something up quickly: Cape Point is a wave-thumped headland at the very bottom of the Cape of Good Hope Nature Reserve but nearly everyone refers to the reserve as the Cape Point Nature Reserve instead – shorter and easier I guess. There is another rocky outcrop close to Cape Point called the Cape of Good Hope (it has the famous sign). Stand there and you won’t be the most southerly person in Africa but no-one will be further south-west than you unless they are swimming. 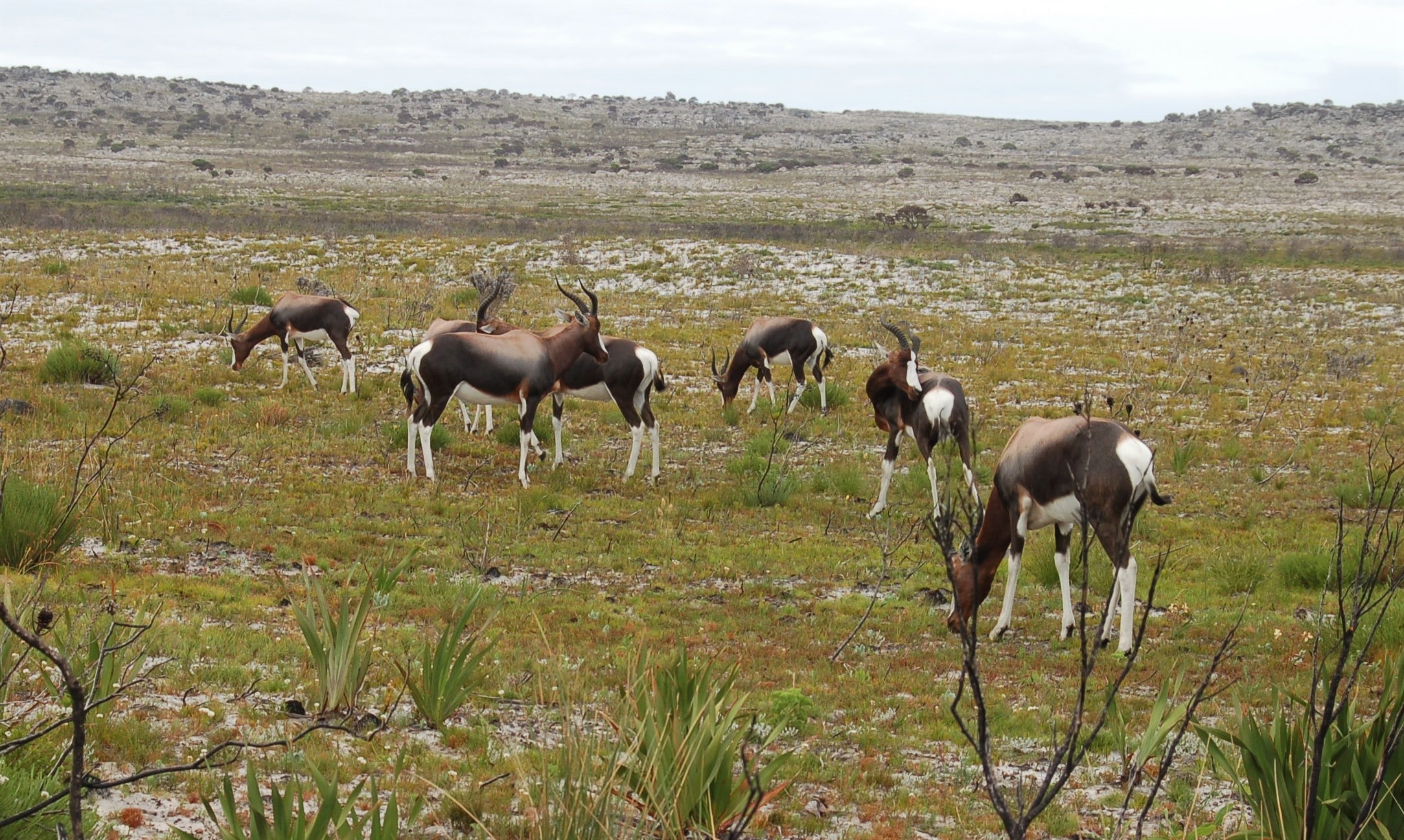 You’ll see the rare Bontebok antelope (Damaliscus dorcas dorcas) if you take the quieter side roads in the Cape Point Reserve: these animals are grazing new plant growth after a fire.

The reserve itself is of modest proportions – 75 square kilometres (30 square miles) – and lies an hour’s drive from Cape Town via (conveniently) Simons Town and the Boulders Beach penguin colony. There is only one entrance gate into the reserve, delivering you onto a road which ends 15 minutes later at a car park at Cape Point. Here you’ll find the lighthouses, restaurants, shops and bathrooms. It’s also where you’ll find everyone else. 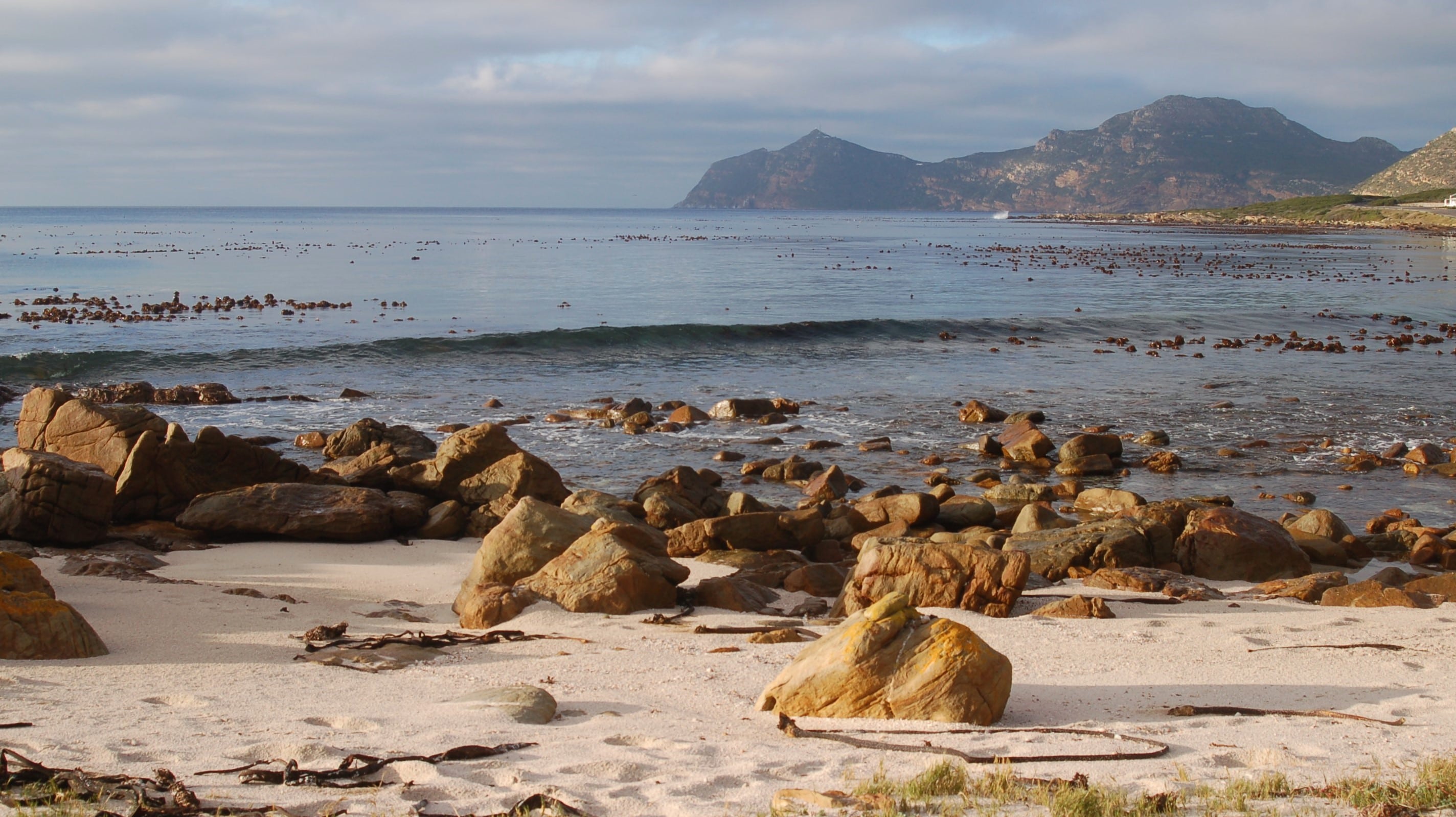 If crowds are not your idea of fun then you may prefer to enjoy a view of Cape Point from a deserted beach rather than to actually go there!

Something else you should know about the Cape Point Reserve is that it is extremely popular with both local and international visitors. Or rather, the car park at Cape Point is. The rest of the reserve is barely touched and you can walk quite literally for hours and not see anything except stunning views, wildlife and flowers. And you don’t even have to walk: the main road through the reserve is punctuated by smaller side roads with great names – Olifantsbos (Elephant Bush), Buffels Baai (Buffalo Bay), Gifkommetjie (Poison Cove) and Plat Boom (Flat Tree) – which take you to storm-tossed beaches covered in birds, sea shells and otter footprints. There are several troops of baboons in the Cape Point Reserve; they forage naturally on the beaches & rock pools as well as, unfortunately, our picnic sites. Keep food out of sight.

For hikers, there are full-day adventures, morning walks and gentle rambles. Bird watchers can tick off classic fynbos species like the Cape sugarbird (Promerops cafer) and Orange-breasted sunbird (Anthobaphes violacea) as well as marine birds from gulls to gannets. The reserve is a great destination for sit-on-the-beach whale watching between August and October but there are always other animals around – baboons, antelope, lizards and tortoises are the most obvious – and wait until you see what low tide brings. The Cape Peninsula is home to 5% of the world’s marine coastal species and Cape Point’s rock pools are crammed with colourful anemones and sea urchins plus starfish, predatory whelks and heavily-armoured limpets. 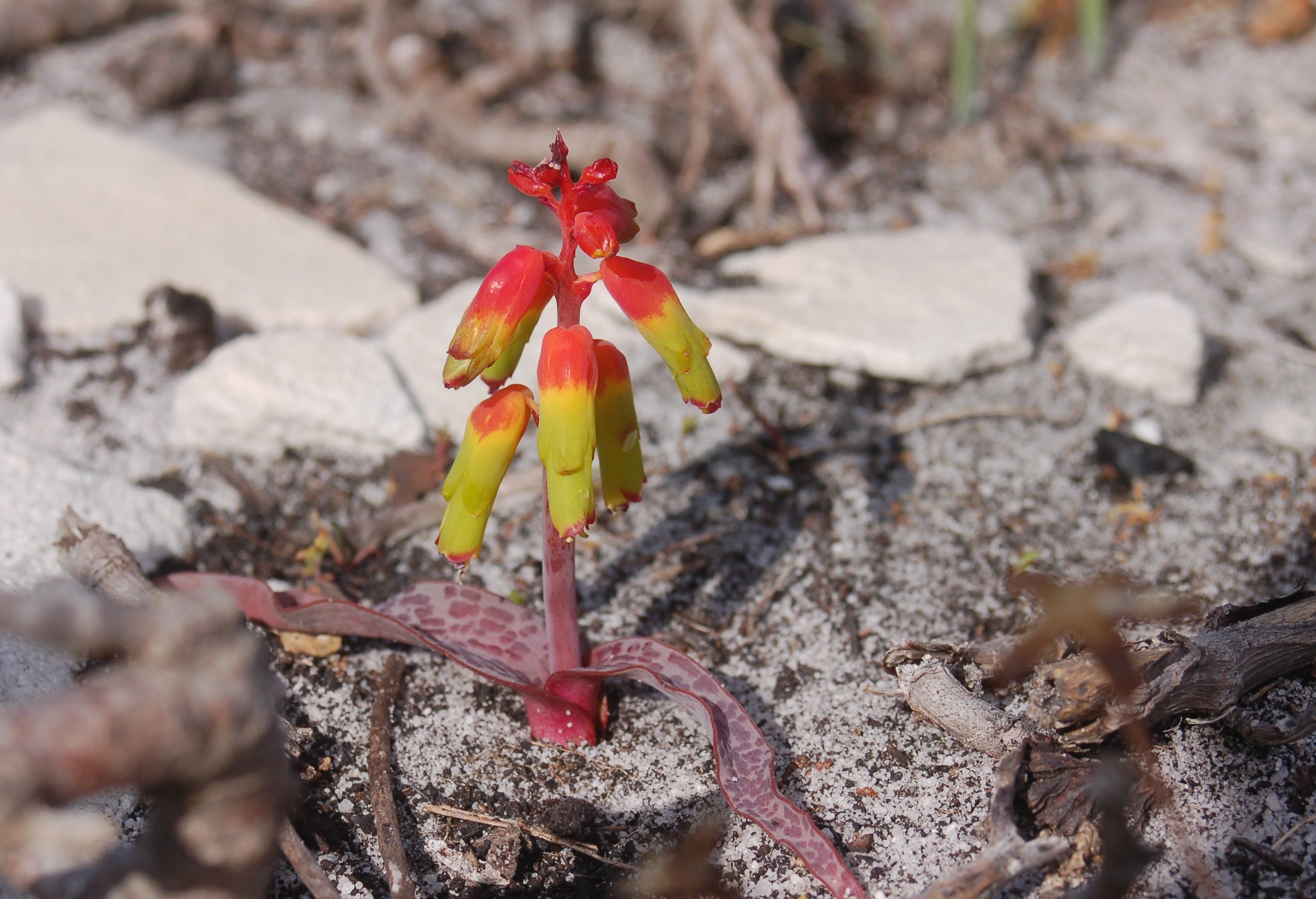 A Cape Cowslip (Lachenalia aloides) – a type of Hyacinth – provides a colourful counter punch to the whites & greys of the reserve’s sandstone mountains.

Botanists won’t be able to contain themselves either: besides the well-known crowd-pleasers – King Proteas (Protea cynaroides) and huge Yellow Pincushion Proteas (Leucospermum conocarpodendron) the reserve is home to several endemic species which include Diamond Eyes (Staavia dodii) and Serruria glomerata – one of the Spiderhead Proteas. There are several different biomes to explore – mountain fynbos, coastal fynbos and the coastal strandveld – all in different stages of post-fire recovery and all easy to access. And if you do coincide your visit after there has been a recent fynbos fire, then prepare yourself for an almost immodest display of flowers: great blankets of orchids, irises, hyacinths and amaryllis species – to name a few of the more familiar ones – erupt out of the charred sand to bedazzle the lucky onlooker. 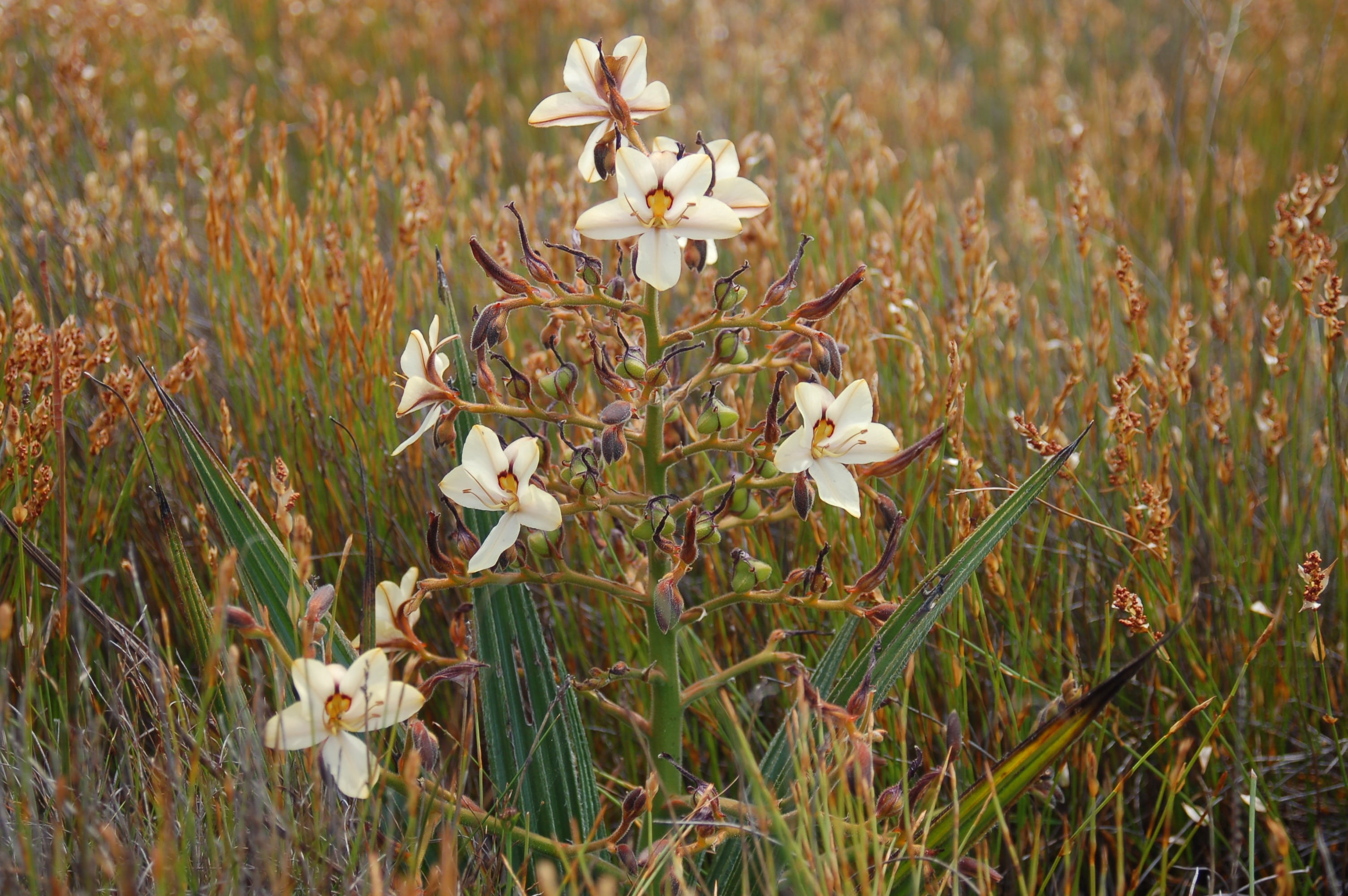 Wachendorfia paniculata – the Butterfly Lily – in a local marsh: you’ll find these plants dug up & their roots eaten by porcupines – but you won’t see the ever-elusive porcupine!

It’s best to spend the better part of the day there – especially if you plan to visit the penguins at Simons Town too. Get there as early as you can – especially in summer, to beat both the heat and the crowds. There are plenty of scheduled Cape Point tours available but nearly all will whisk you straight to the places where everyone else is. A hire car gives you independence but perhaps not the local knowledge to find the best spots in the reserve. The answer is to use a private guide such as your writer to guarantee the most rewarding day whether it’s sight-seeing or bird watching you are most interested in; it also helps to have a degree of flexibility with your time – try and keep a reserve day. This is, after all, the Cape of Storms.
Contact me if you’d like more information about a Cape Point tour. Who would think that black & white stripes provides such effective camouflage? It’s amazing how the reserve’s Cape mountain zebra (Equus zebra zebra) blends into the landscape.

One of the reserve’s many succulent plants, Euphorbia caput-medusae is known as Medusa’s Head & it poisons domestic livestock if eaten though the reserve’s antelope browse it without ill effect.

There’s easy walking in the Cape Point Reserve with usually no-one else on the trails – well, no humans anyway. A Red Hartebeest skull (Alcelaphus buselaphus) reminds us that natural cycles are in place in the reserve. Once, this antelope would have been preyed on by lions; this one probably died of old age. Tidal rock pools are always rewarding in the Cape Point Reserve – the best ones are on the Indian Ocean coast where marine diversity is higher than on the Atlantic coast.