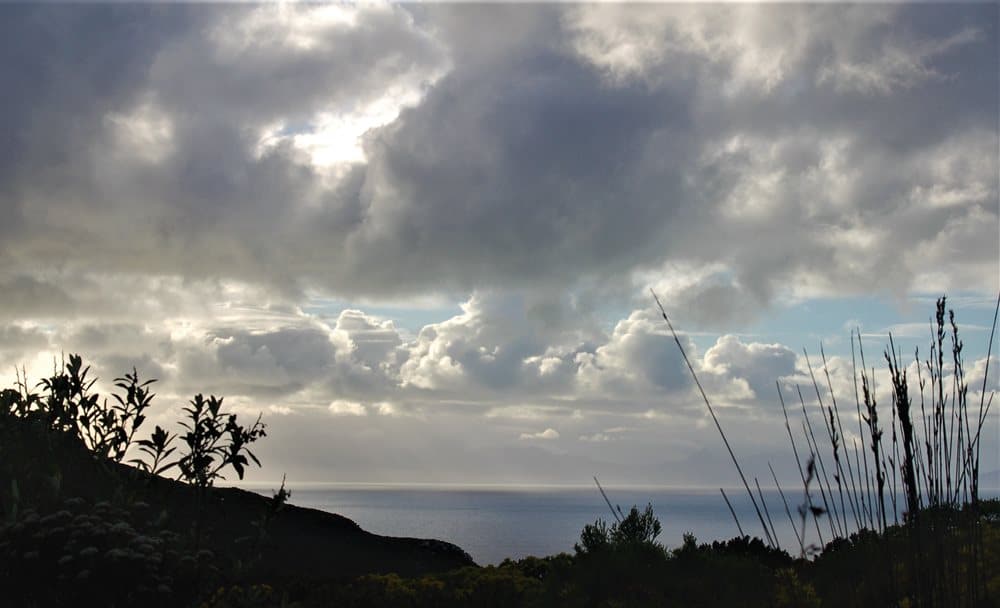 Oh, I know you know the clouds. There’s cumulus and cumulonimbus and … er … strata-something and then … hmm … Sirius? Or is that a star? Okay, perhaps it’s time for a quick guide to the clouds, and why not? Knowing your clouds – in an outdoor setting anyway – could mean the difference between life and death. Or at least getting miserably wet.

The beauty of it is that you only need four words (five if you’re feeling up to it) for an understanding of the cloud system – how it works and which ones rain. And you know three of the words already: cumulus, stratus and cirrus.

It was only in 1802 that Englishman Luke Howard proposed naming the clouds; until then, they were all just known as ‘clouds’.

Cumulus are the white fluffy ones; they float around at low to mid-altitude. Stratus signals a low layer of cloud, and cirrus is the high altitude wispy cloud. Now you can make compound words out of these three to create different clouds: a thin sheen of high cloud is cirrostratus while a blanket of fluffy clouds is stratocumulus.

So far so good but what about the wet stuff? Simply take the Greek word for rain – nimbus – and add to a cloud to make one that delivers it: cumulonimbus in the form of a thundering downpour and nimbostratus as low-level drizzle.

The fifth word you could use is alto – another Greek word and this one means ‘high’. Simply add it to your cloud to give it some altitude: altostratus for example – big flat clouds way up in the sky – or altocumulus – high-flying balls of fluff.

It gets a little more complicated when we include mountains in the mix, as one must in the Cape. Mountains can create their own clouds – as we shall see – by reflecting the prevailing (or incoming) weather conditions.

Enough of the science! Cast your eyes skywards and let’s have a look at the clouds of the Cape. 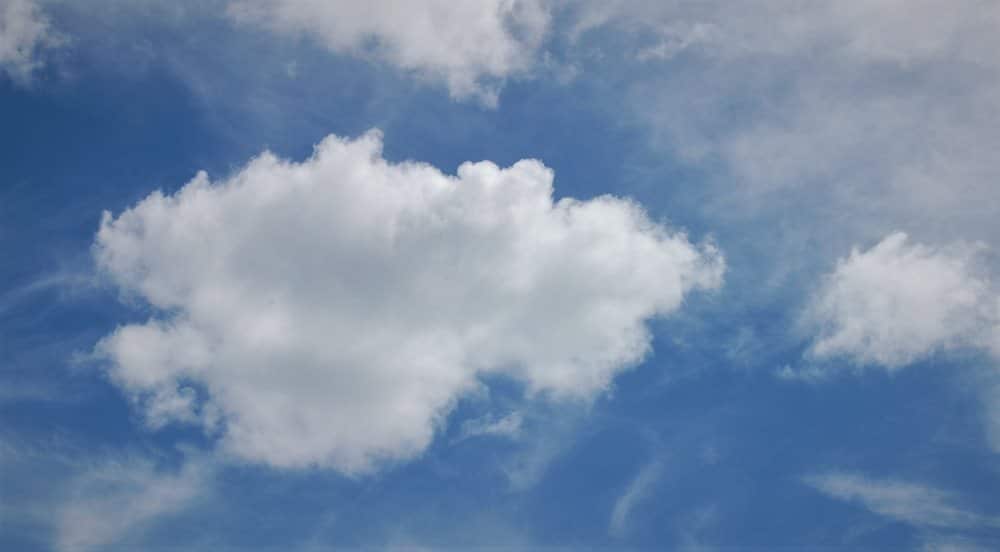 Ask anyone to draw a cloud and they will draw a cotton-wool cumulus – often with rain drops coming out of it which is unfortunate since this is a cloud most unlikely to produce rain. Cumulus can however be a sign of things to come and, if there is enough heat and rising air, then they morph into great towers of cloud reaching high into the atmosphere to eventually create the anvil-headed cumulonimbus. This cloud delivers anything from thunder and lightning storms to heavy rain, hail and tornadoes but is rare in the Cape Town area – perhaps the influence of cold oceans and never-ending winds prevent such updrafts of hot air.

Stratus are the lowest level clouds, ranging in colour from white to grey and usually featureless in form – you’ll know them from those dull overcast days, perhaps with a bit of a drizzle thrown in for good measure. English weather, basically. Stratus clouds can reach right down to the ground whereupon we change their name and refer to them as ‘fog’.

Made of ice crystals, cirrus clouds occupy the higher reaches of the atmosphere – up to 15 000 metres (50 000 feet) above sea level. Their wispy appearance gives them their name – cirrus means a ringlet of hair in Latin – and although they don’t produce rain themselves, they are useful indicators of what’s to come. Random, wispy-edged cirrus clouds – shown above – are usually a sign of fine weather approaching. But when cirrus clouds start banding and leave stripes across the sky (see image below) then pack a rain jacket because rainy weather is on the way. 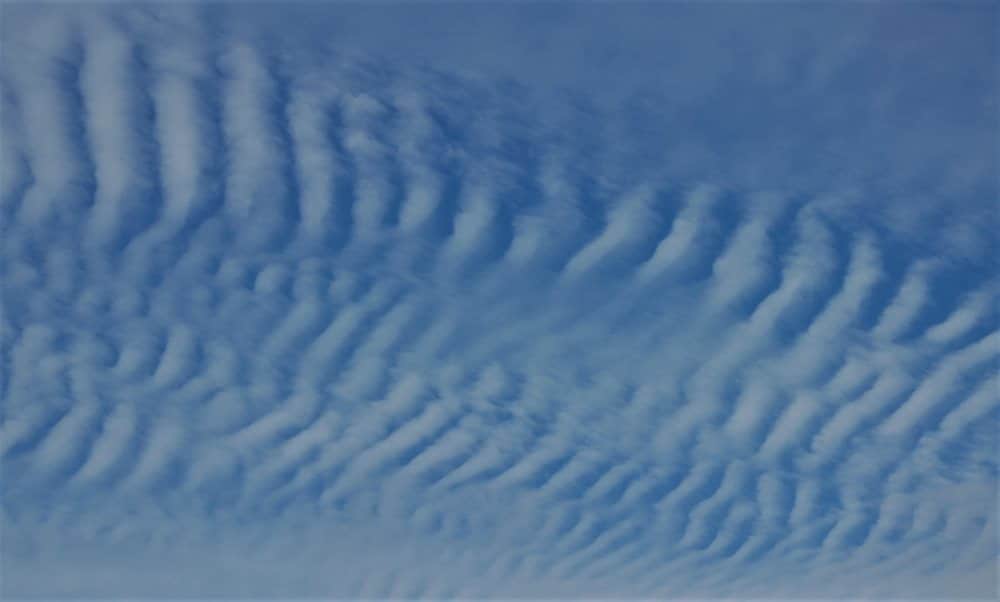 Another sign of a downturn in the weather is revealed by a type of cirrus – cirrocumulus, shown below. Known as a ‘Mackerel Sky’ in English, the fish scale-like pattern of the clouds can be beautifully illuminated by a setting sun but rain is almost certain to follow within half a day. 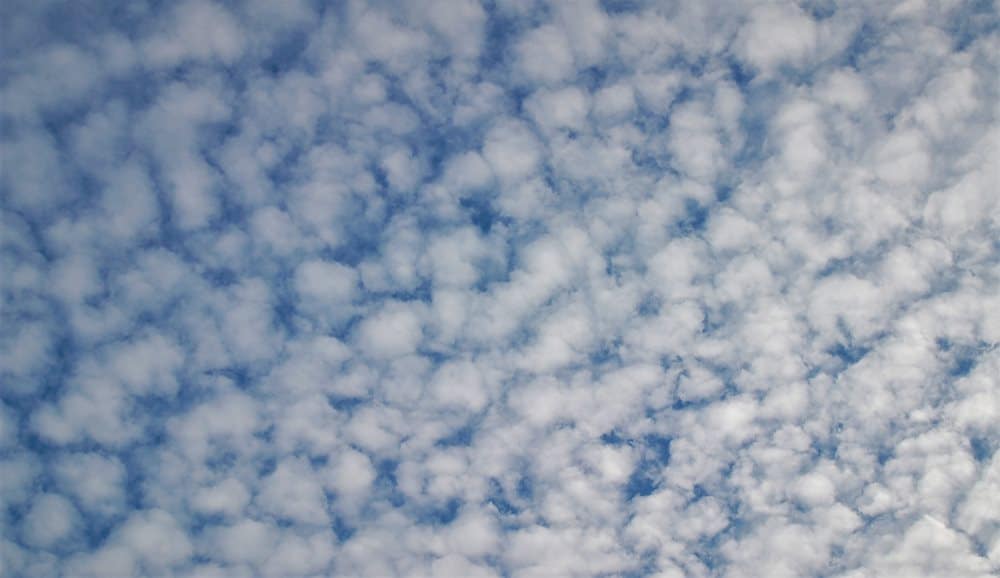 Cirrocumulus clouds have long been noted as an indicator of rain on the way.

Speaking of bad weather on the way, if you live in Cape Town then here’s another sure sign that your planned hike on Table Mountain is going to end badly. 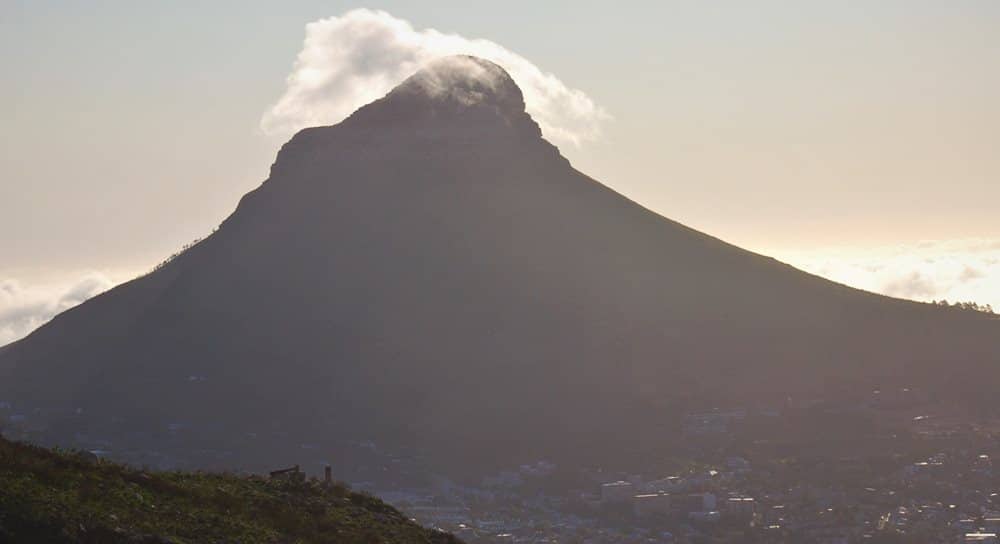 You spent the day on the beach but this cloud means you’ll be waking up to cloud & rain the next day.

It might be a lovely sunny day right now but when a cap of cloud starts forming on the top of Lion’s Head, then you can expect rain the next day. And not just any old rain, it’ll most likely be a big, bad-tempered cold front rolling off the Atlantic Ocean – known as a ‘north-wester’ to locals. 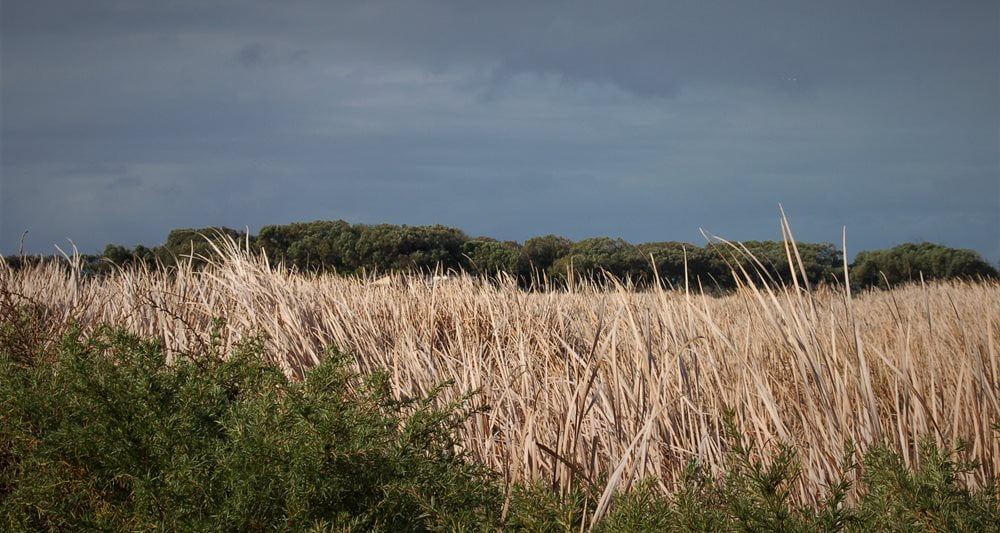 A heavily-laden nimbostratus cloud about to open up – this is the cloud we depend on for our water supply.

And here it is, predicted a few days earlier by the stripy cirrus clouds and confirmed the day before by cloud on Lion’s Head: nimbostratus – the rain cloud. Turning the sky dark grey and blotting out the sun, nimbostratus clouds are loaded with moisture (but no thunder or lightning) and ready to rain all day. 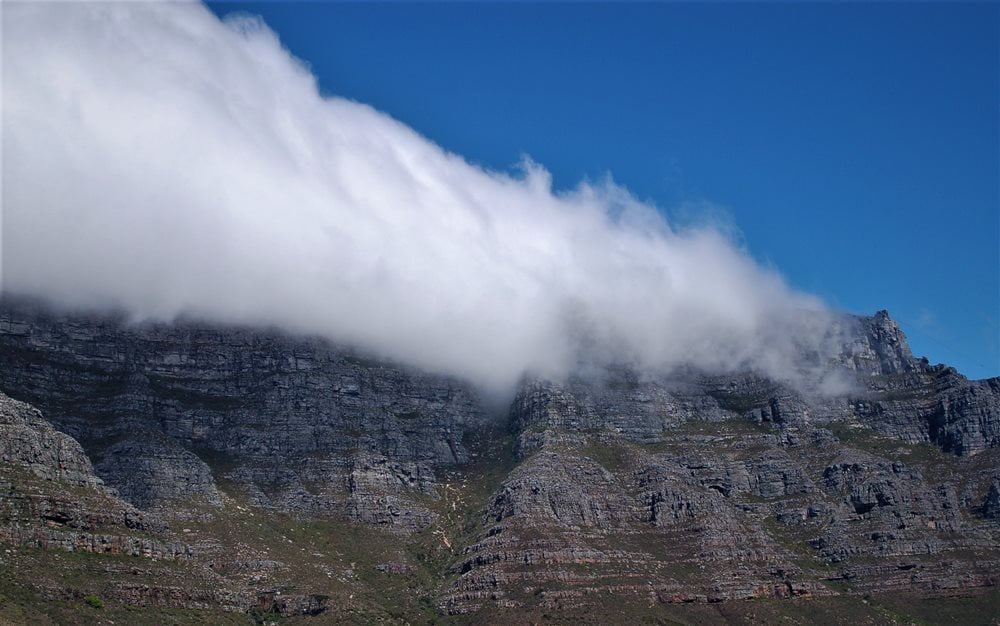 Table Mountain’s Table Cloth covering the flat top on a sunny summer’s day – you can see the cable car station on the far right.

The trouble with this cloud is that it if you are looking at it, then it is already too late for forecasting: this is the ‘Table Cloth’ that covers Table Mountain for fully half of the year and chances are you will be hanging onto a lamp post already. The thick billowing Table Cloth is produced by Cape Town’s infamous ‘south-easter’, a ferocious wind that huffs and puffs its way all through summer. Often at gale force, the south-easter wind picks up moisture from the ocean as it hurtles towards Table Mountain, only to then rise, cool and condense into the white blanket of cloud. It looks impressive from a distance but it’s not much fun if you are in it; there’s little visibility, it’s wet and you’ll battle to stay on your feet.

And although the Table Cloth makes a mighty mess of your time on the mountain, it does have a redeeming feature: the Table Cloth is the reason we have Cape Town. Seriously. But we’ll have to hike up there to find out why.