FYNBOS AND FIRE: WHY DOES IT BURN? 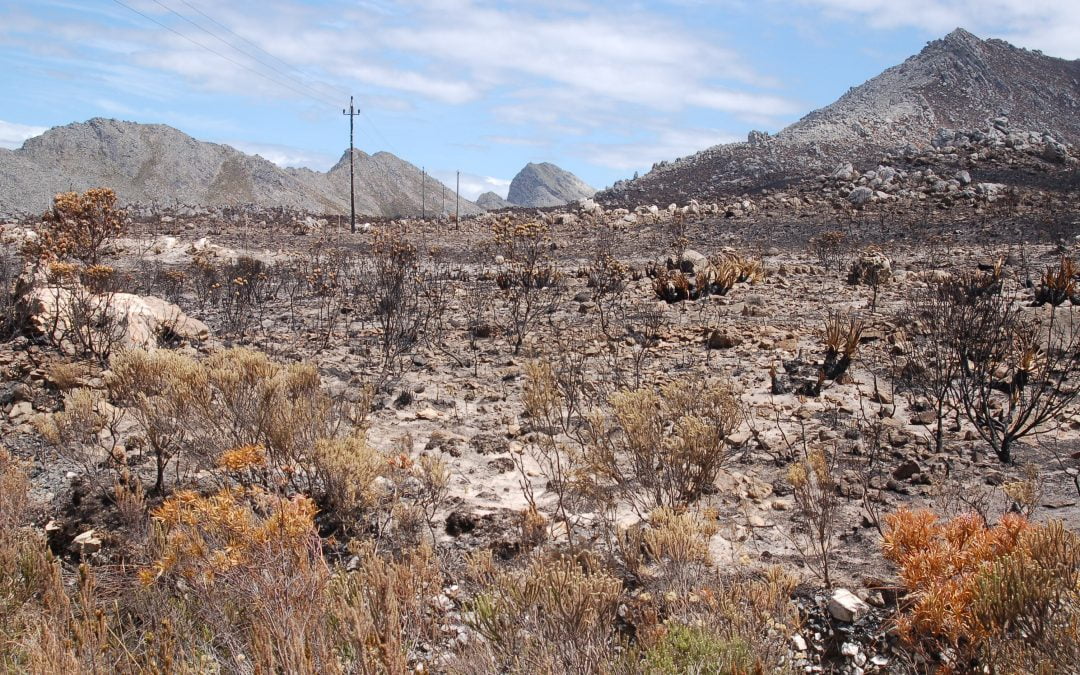 With all this fuss made about the wonders of fynbos vegetation, it does seem a bit drastic that it all gets burnt to cinders from time to time. 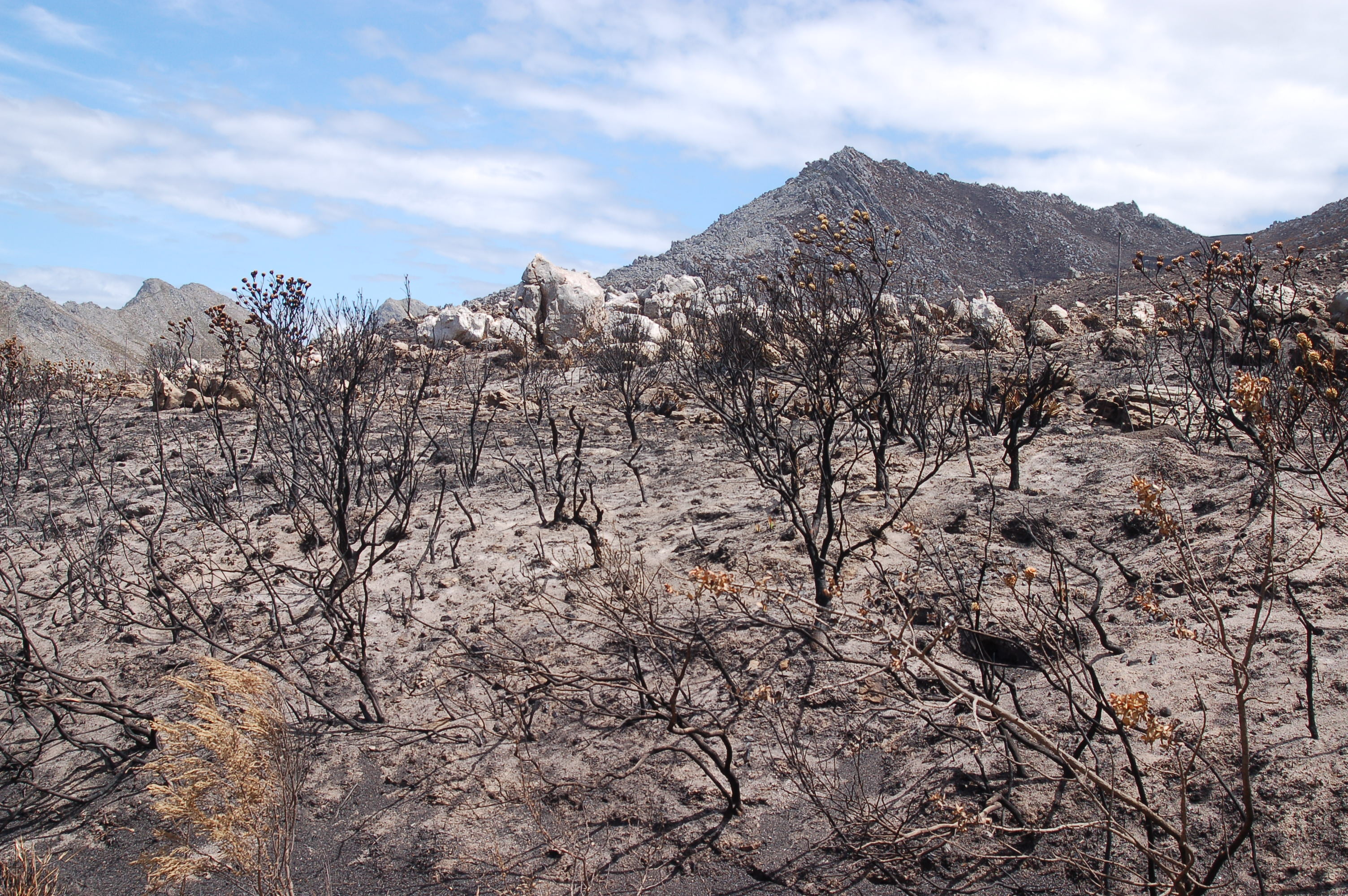 The aftermath of a fire is distressing – especially when there is loss & injury to communities – but from an ecological viewpoint, this is the beginning, not the end.

But stand in a patch of flower-spangled fynbos anywhere in the mountains in the Western Cape and you are looking at a landscape that not only endures repeated sheets of roaring flames but actually thrives – no, depends – on the stuff.

To understand why, we need to jump into a time machine and go back a few million years. Buckle up, here we go. 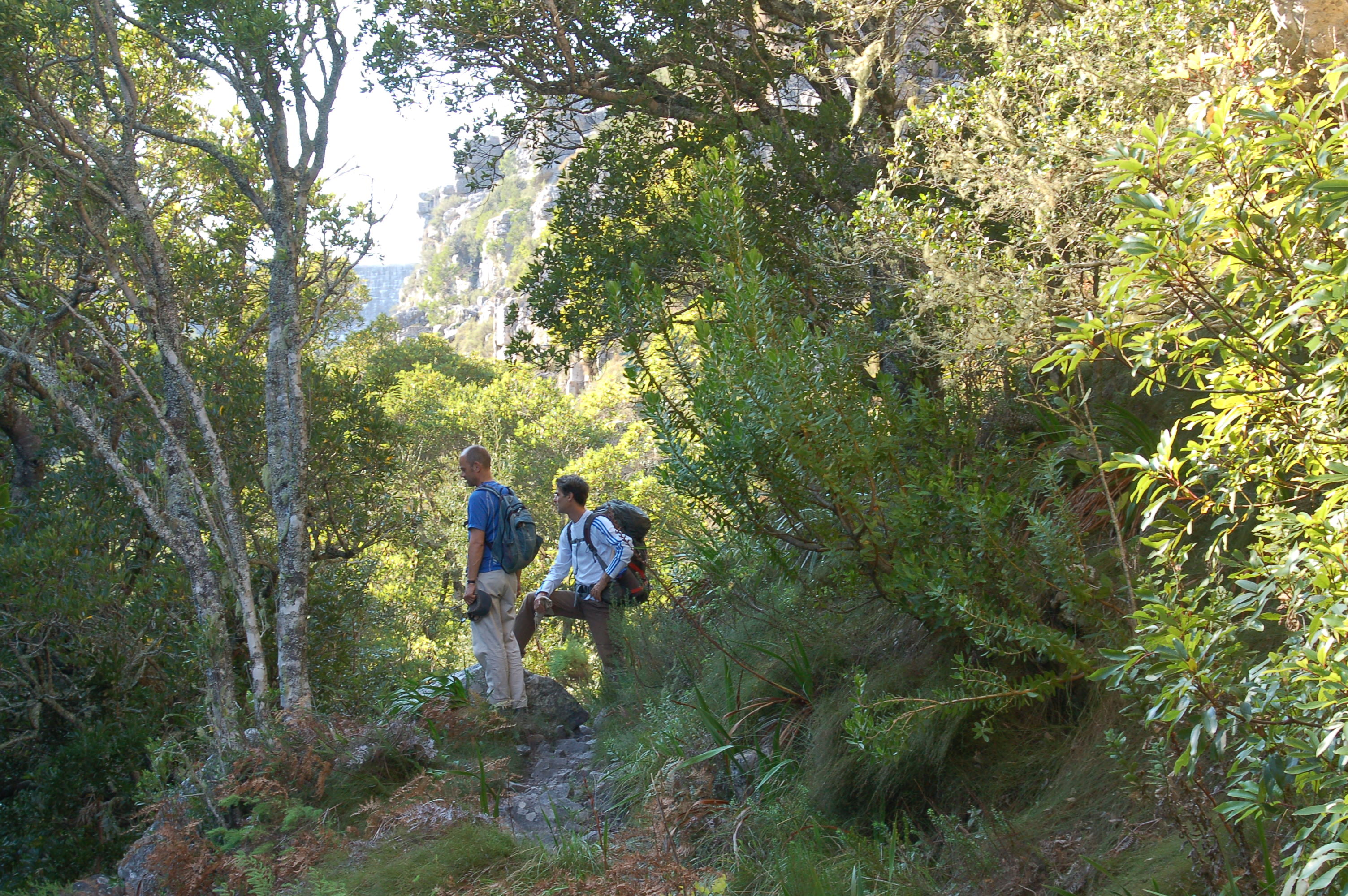 Hikers in Orange Kloof, a patch of ancient indigenous forest tucked away in a sheltered valley on Table Mountain.

Now we’re on the top of Table Mountain overlooking what will become Cape Town in ten million years. The view is one of a thick forest as far as the eye can see. It looks like tropical rainforest but it’s a cool, temperate forest and you can still walk through its hushed, sun-dappled galleries in places like Skeleton Gorge on Table Mountain or the Knysna Forests on the Garden Route.

Indeed, this forest once covered much of Africa and even today half the forest tree species that look out over Kirstenbosch Botanical Gardens in Cape Town are the same ones you slither past as you trek for gorillas in the dripping Rwandan jungle. 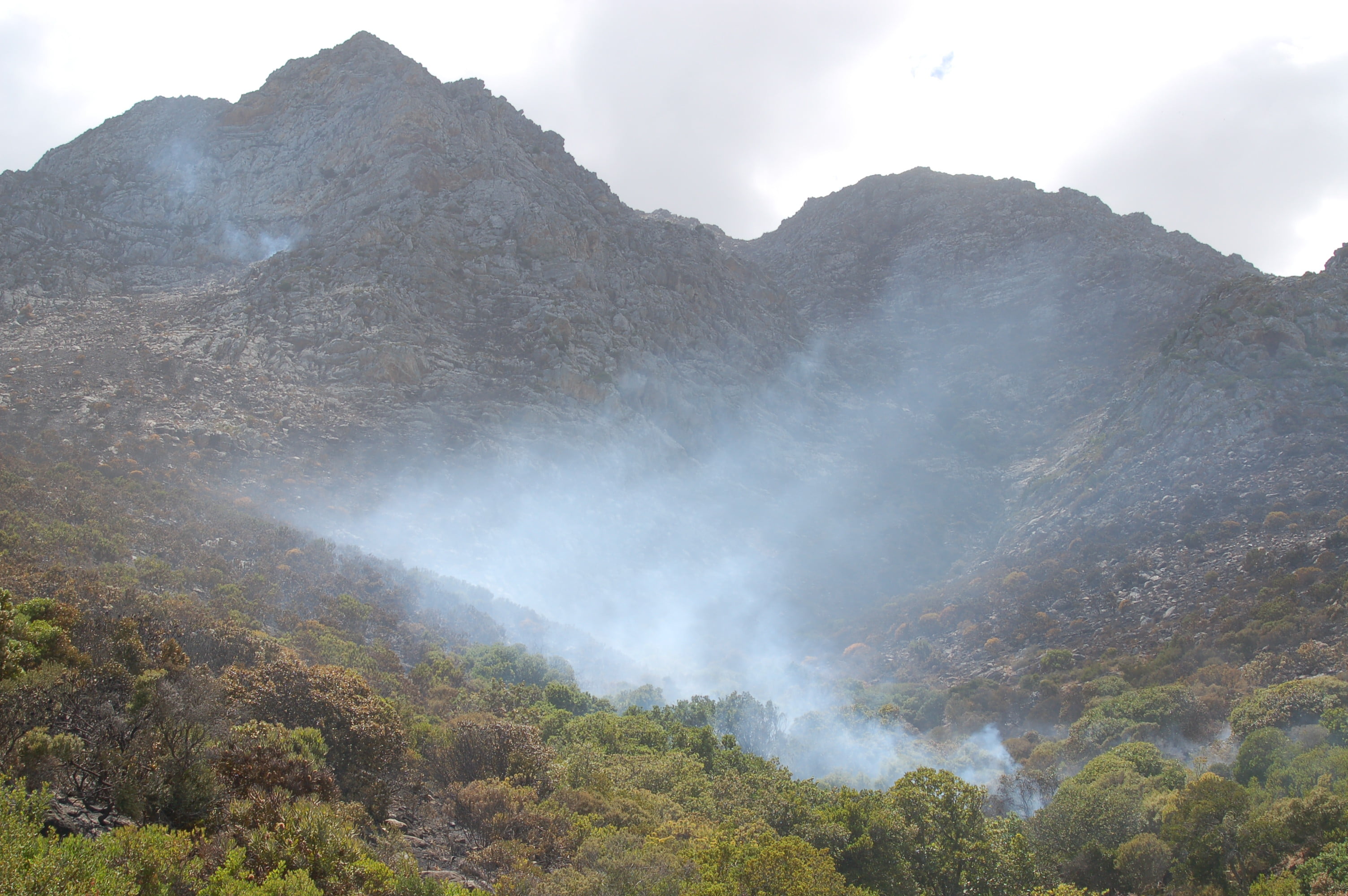 For at least the last two million years, fire has become an inescapable part of life on these hot, dry & windy mountains.

Then the climate began to dry up. By four million years ago, the current weather patterns were setting in: a short wet winter and a long dry and windy summer. Enter fire.

You can’t have hot, dry and windy mountains without fire – occasional lightning strikes and sparks from rock falls will see to that. The indigenous forests couldn’t cope with regular fires so they shrank back to the last few fireproof ravines on mountains – steep-sided Skeleton Gorge is a classic example – and the wetter areas of the fynbos biome.

Fynbos plants took the gap. Many had been around for a long time; Proteas are among the oldest families of flowering plants, evolving with the dinosaurs and patiently waiting their moment in the sun. Other families like Restios – the charismatic copper-topped reeds of fynbos – are perhaps older. They are also represented in Australia, New Zealand and South America, coming from a time when the southern continents were fused together as Gondwana. 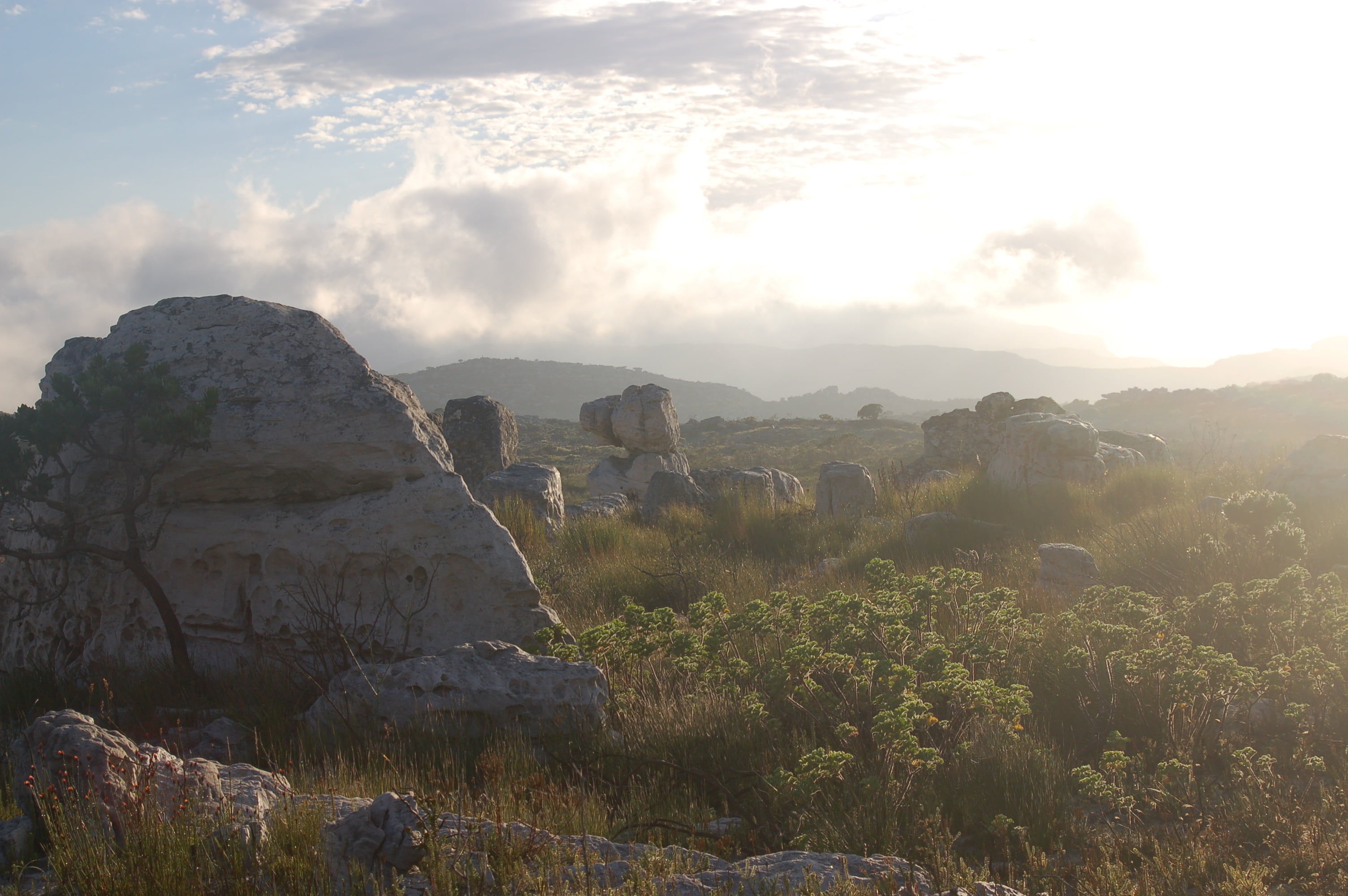 Whatever their provenance, with the forests gone these plants found themselves with a new but somewhat unpromising environment: thin, poor soil; unrelenting sun and wind; and repeated, devastating fires. But natural selection is an efficient if not ruthless process and for the last two million years, the fynbos has been quietly getting on by incorporating fire into its life cycles to such a degree that it now relies on it.

In fact, fynbos positively encourages fire: witness the design of its plants – lots of intricately branched shrubs all packed together – and the ground carpeted with tinderbox-dry dead plant matter – the fuel load. And all those pleasant smells of fynbos – the buchus, salvias and geraniums – are in fact highly-flammable oils waiting to flare up. You may as well dip fynbos plants in petrol. 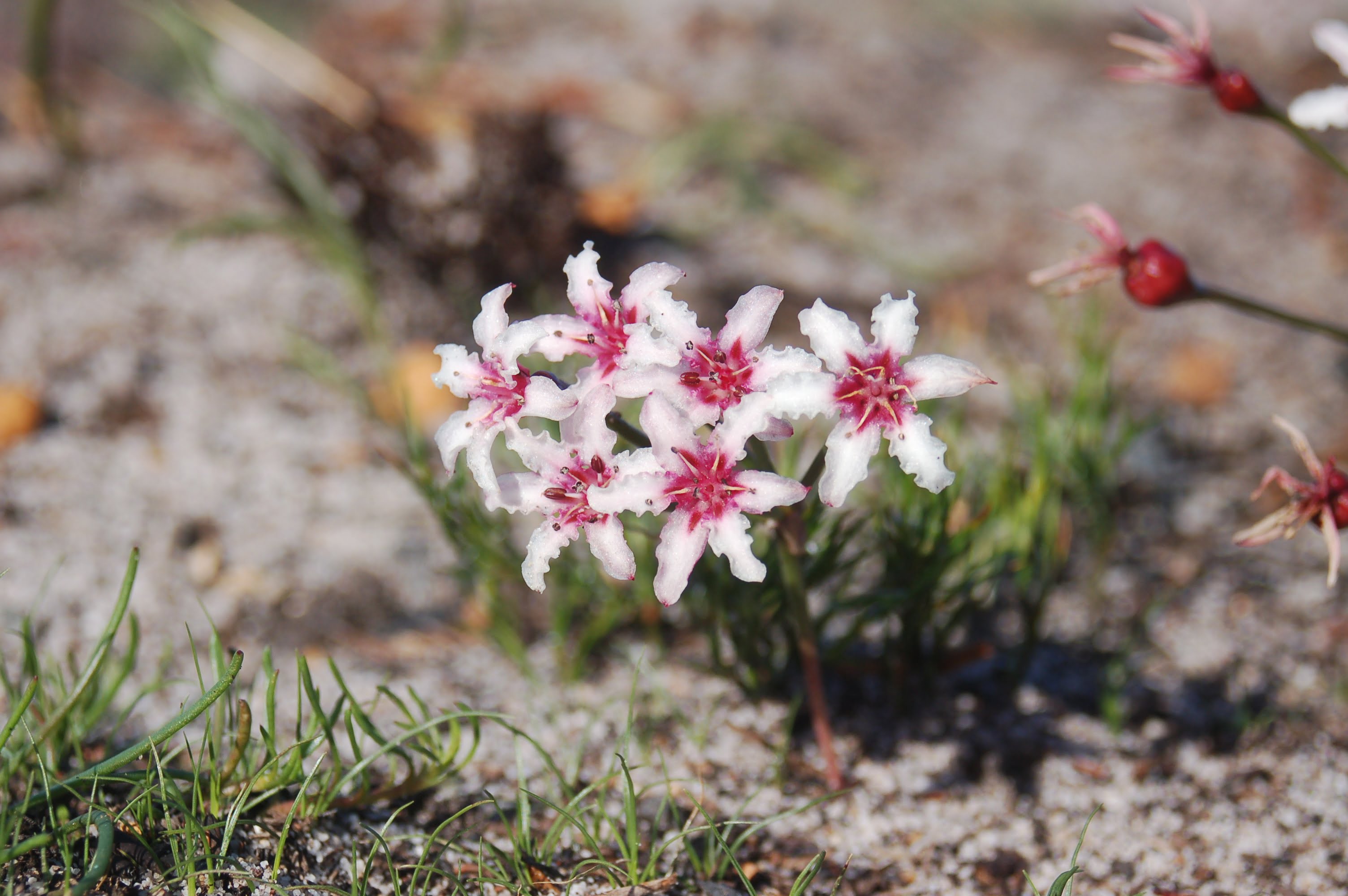 Hessea cinnamomea – the delicate-looking Sambreeltjie (‘Little Umbrella’) is an Amaryllis that refuses to flower in cultivation; it only does so after a raging inferno has swept its marshy habitat.

But first, they must survive the flames – if not the individual plant then at least its genes. They do this by using one of three strategies: becoming a re-sprouter (growing back from a fireproof stump or thick root); by being a re-seeder (scattering its seeds before or after a fire); or living a fairly dull life as a stay-undergrounder (my term, I know it’s not technical) which is what bulbs and corms do – spending most of their lives underground and coming up after fire. 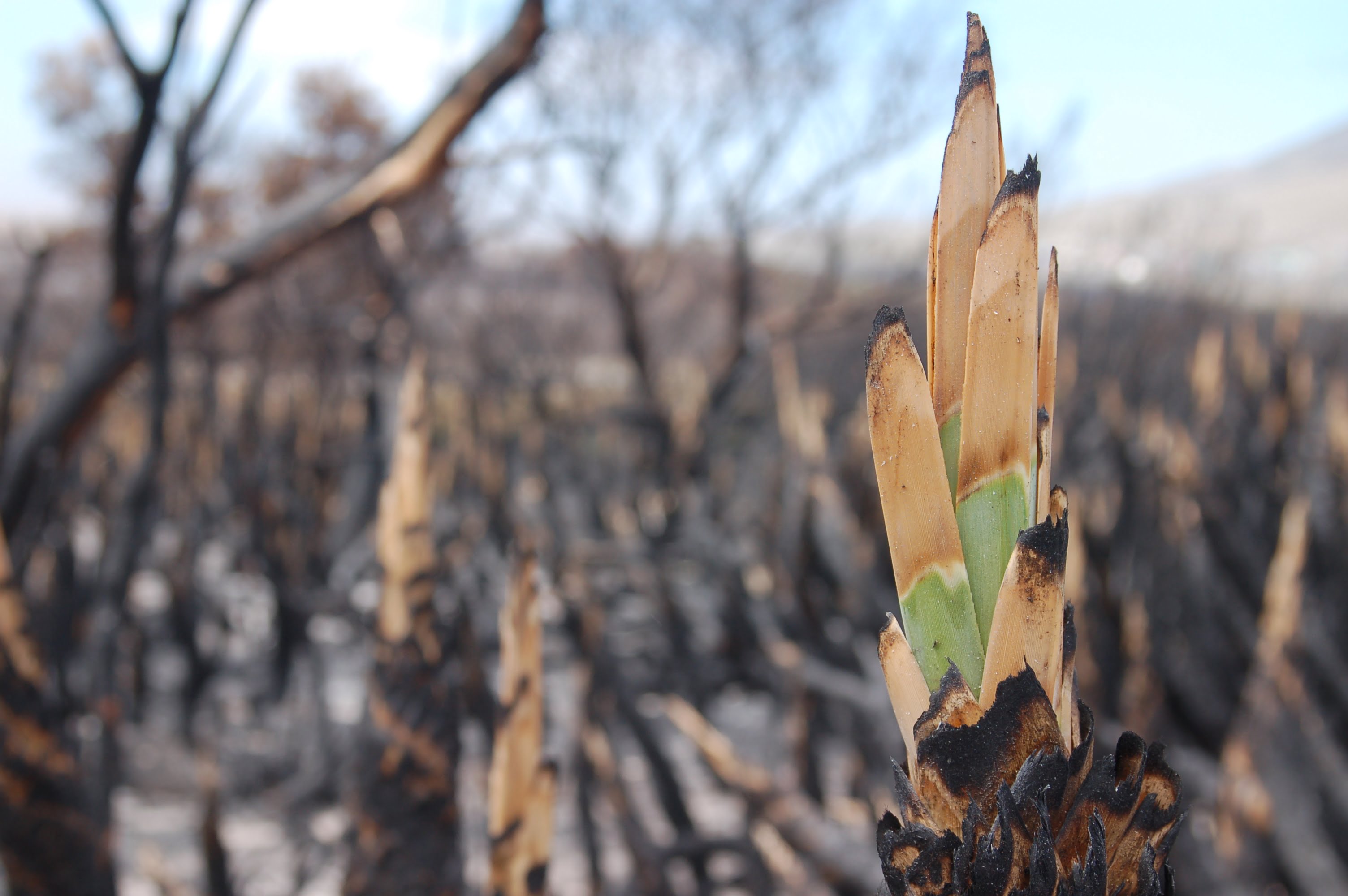 A typical ‘re-sprouter’, Palmiet (Prionium serratum) is a river-living plant whose thick stumps survive fire & send up green growth within days of the flames. 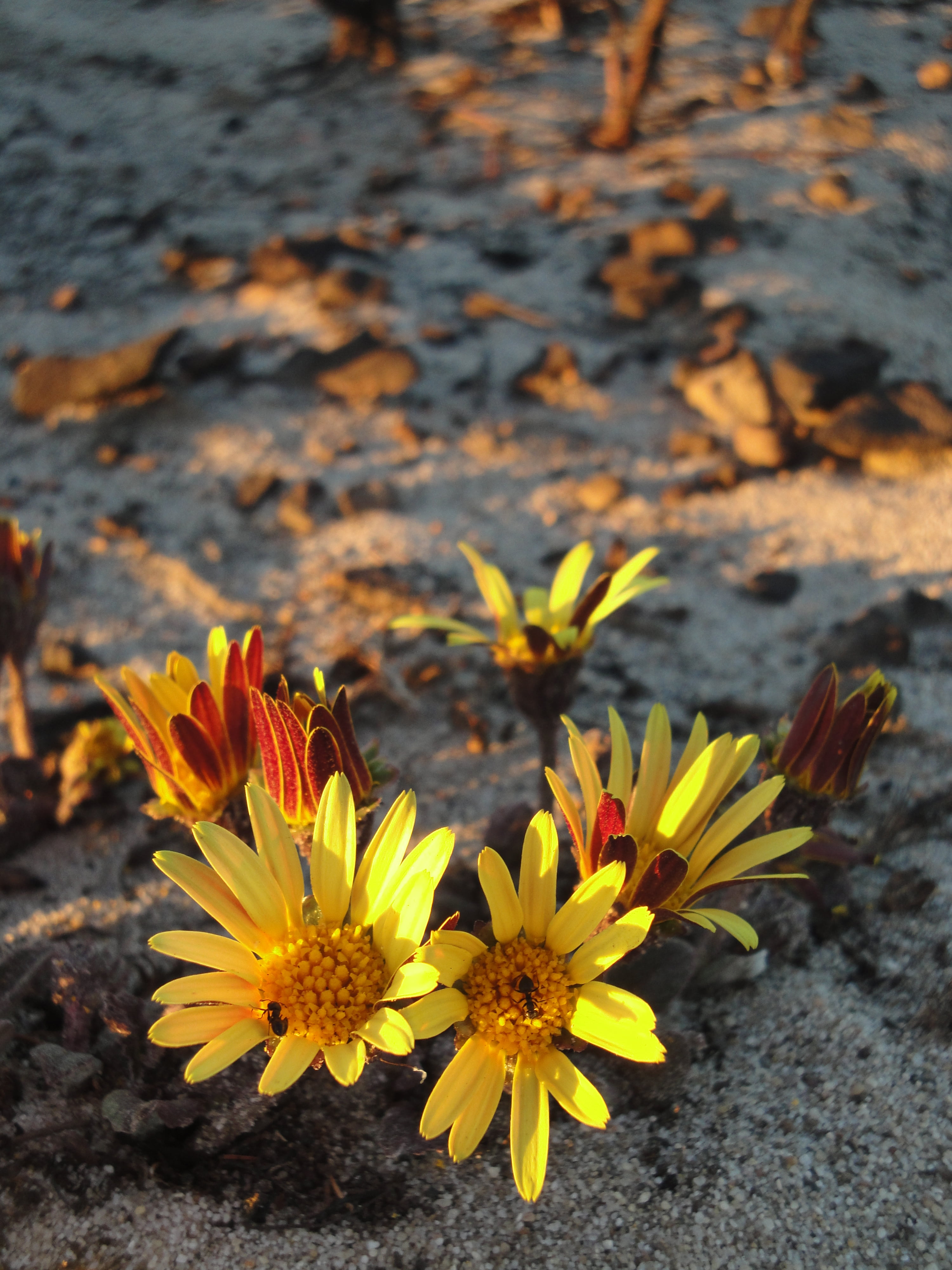 Brandbloms, “Fire Flowers’ are re-seeding daisies that germinate & flower while there is still the smell of soot & charred wood in the air. 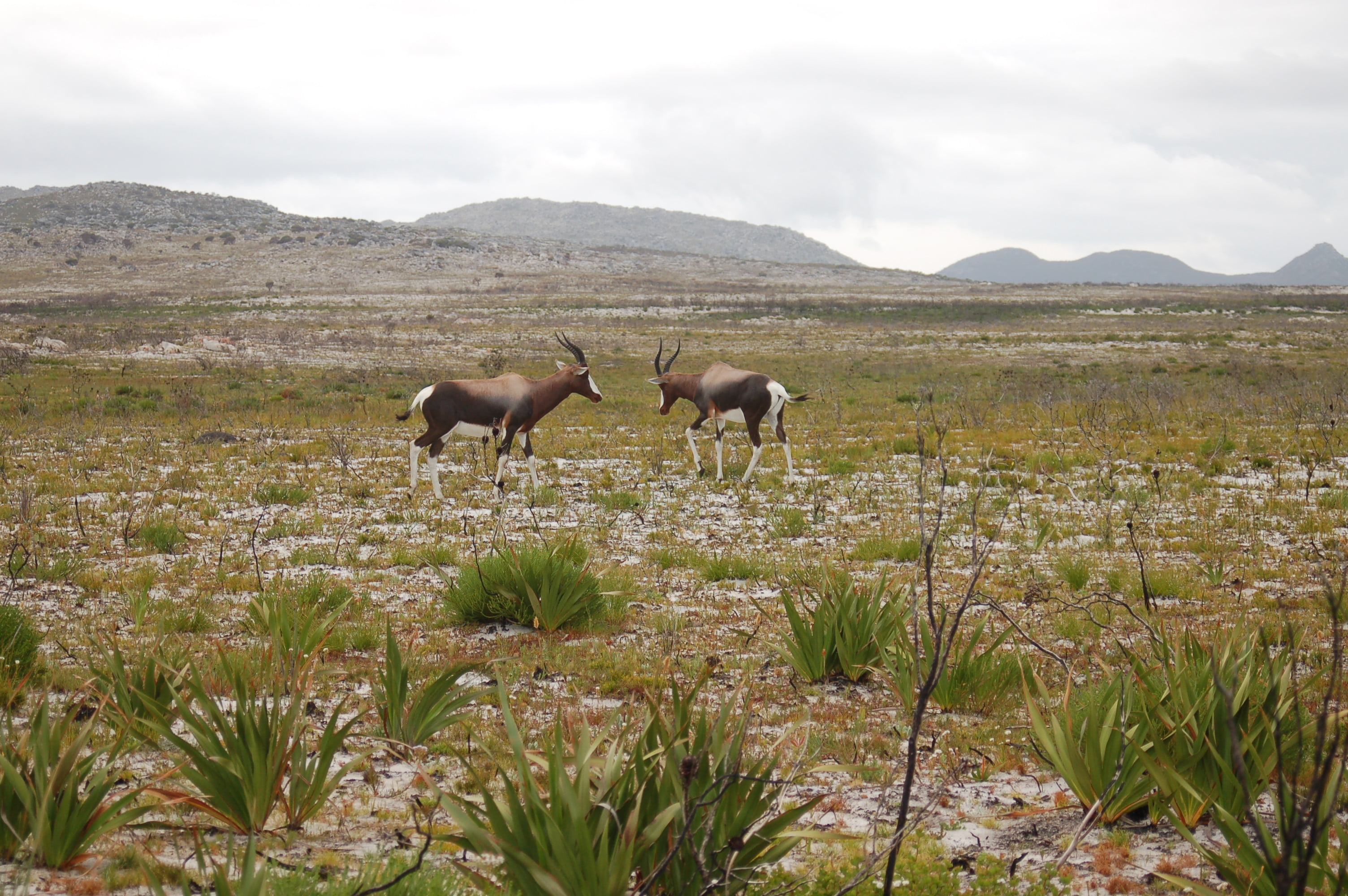 Nutritious post-fire greenery is on the menu for these Bontebok while in the foreground are the fast-growing leaves of Watsonias, a ‘stay-undergrounder’. Its underground corm was once a vital food source for foraging humans.

And now they actively use the fire: the intense heat cracks open seed cases such as those of Leucadendron Proteas – the conebushes – that have been tightly sealed for years – perhaps decades. Other Proteas such as Mimetes and the familiar Waboom, the Wagon Tree (Protea nitida), have thick corky bark that protects slumbering buds which are stung into life by the chemicals in fire like ethynol and ammonia. Heat pulses surge underground, triggering buried seeds and bulbs like Fire Lilies (Cyrtanthus ventricosus) into growth; even those toxic clouds of smoke encourage many Ericas – the heathers – to germinate.

The fire also recycles old organic material into much-needed nutrients for the next generation of fynbos plants and, having cleared the mountains of their blanket of dense and choking vegetation, full sunlight now shines on the rejuvenated landscape. And from a plant’s point of view, the fire has another great advantage in that it has also removed potential predators – rodents, birds and insects – from helping themselves to all those ripe seeds and new greenery. The scene couldn’t be better set. 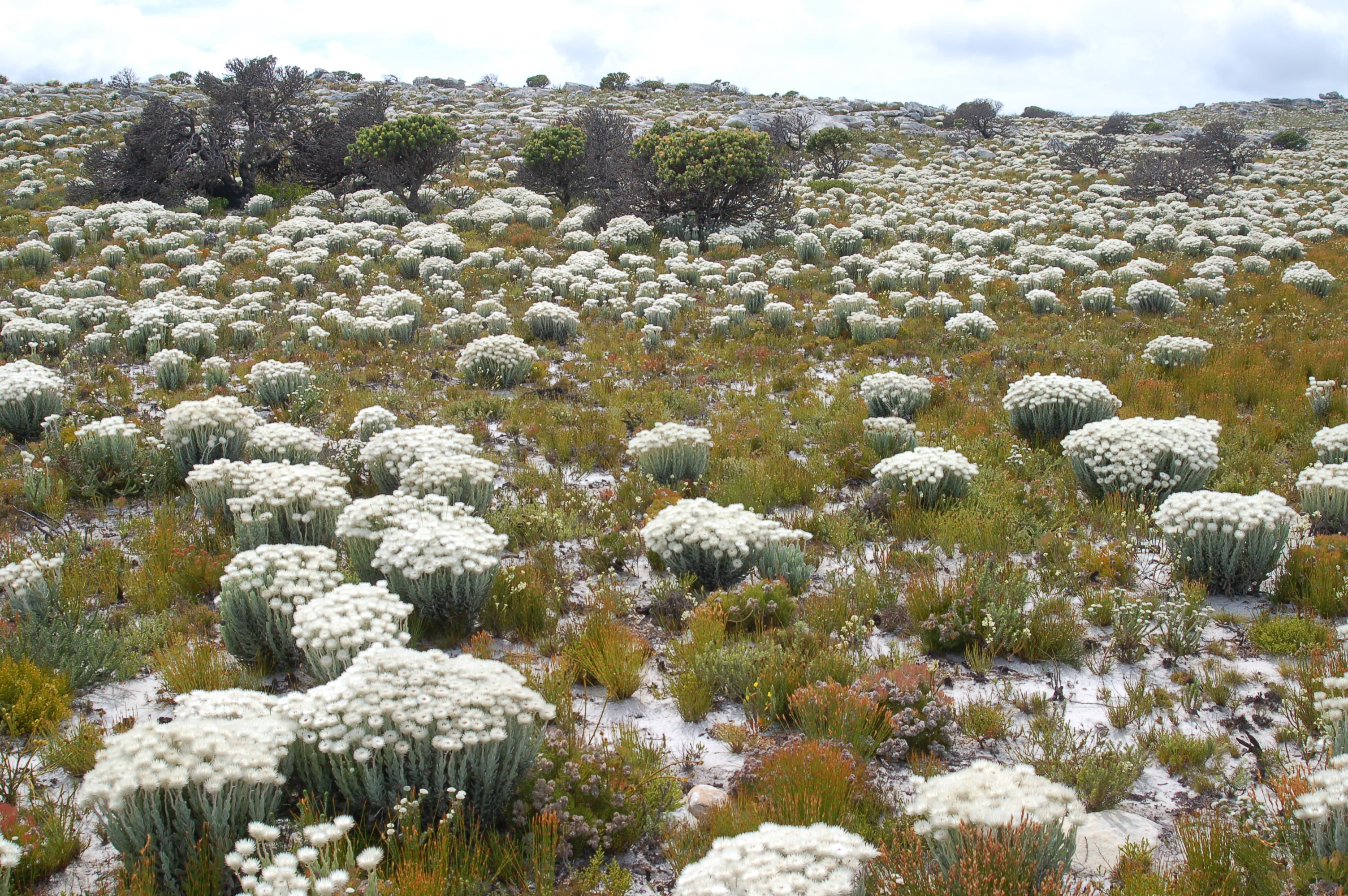 Three or four years after a fire, the fynbos is at its most diverse; everyone is getting their chance in the sun now, not least these fluffy patches of Cape Snow – Syncarpha vestita.

Until humans arrived. The Cape’s indigenous people – the Khoisan – were well aware of the benefits of fire and used it accordingly from the earliest times, burning areas to encourage the growth of edible bulbs, especially those in the Iris family. There was hunting too: wild animals such as antelope and ostrich feed in newly-sprouting fynbos and made easy targets. Later Khoisan pastoralists would graze their sheep and goats in these green, post-fire landscapes.

Chances are the ecosystem could manage such pressures back then – Khoisan settlement was sparse and took little from the land – but there was a regrettable lack of restraint from the European settlers. They bought a savage fire regime to the mountains, forcing fire after fire to encourage new growth for their livestock until the colonial Dutch authorities had to threaten would-be fire starters with the death penalty. 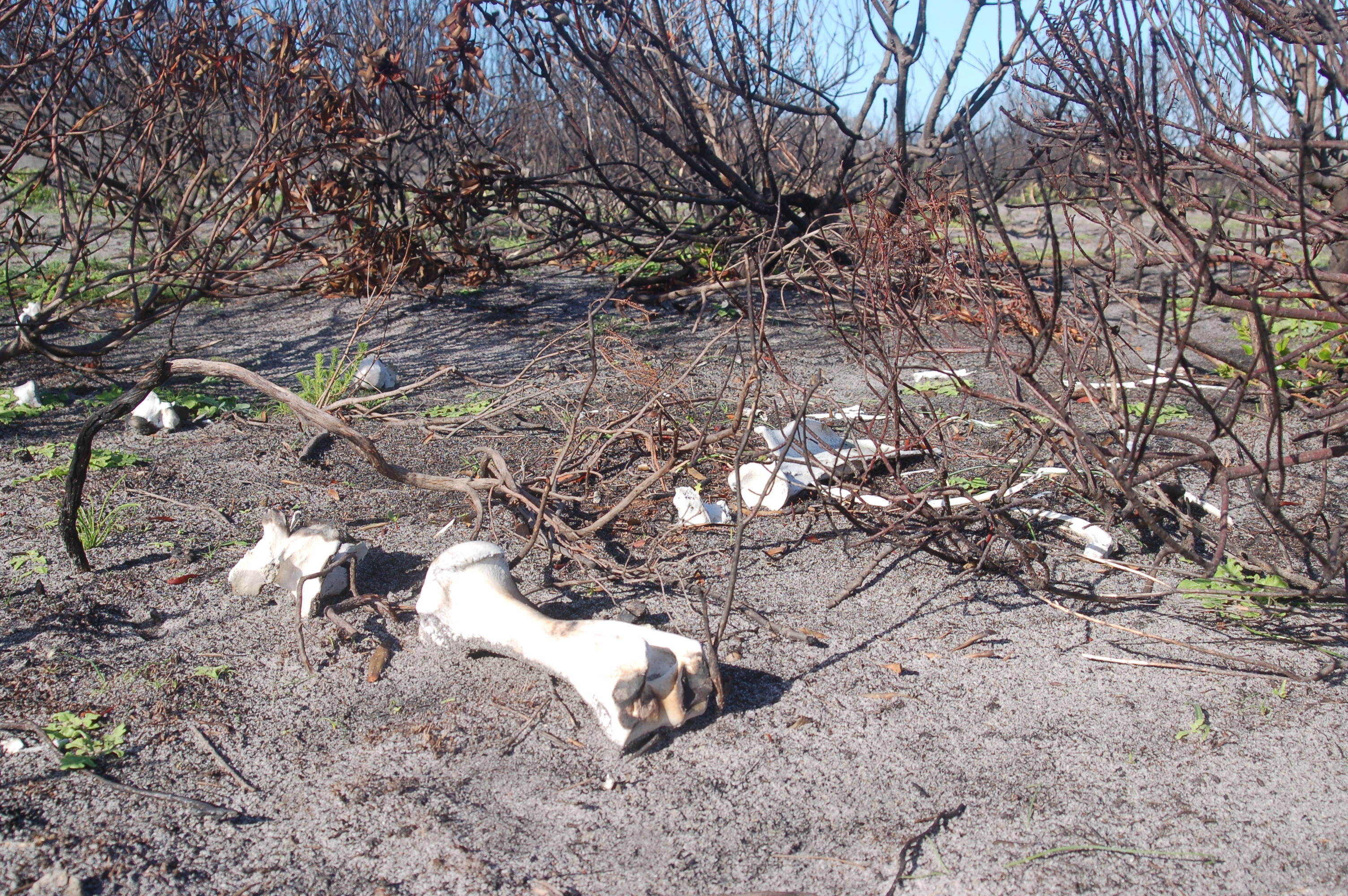 Disrupted & unbalanced fire regimes lead to fires that are too hot & too devastating: wildlife is killed, natural bio-diversity is lost, soil erosion accelerated & the spread of alien vegetation is facilitated.

Things are better now (the original Portuguese name for the Cape was ‘Land of Fire”) but we now have a rather unbalanced situation. Many areas of Table Mountain, for example, are desperate to burn; the plants are tall, dry and leggy, with just a few green leaves left gasping for air at the top. The ground is thick with dead plant matter and there is barely a flower to be seen – the fynbos is dying. But fires on Table Mountain are seen – often correctly – as great dangers and every attempt is made by authorities to extinguish them, robbing these plant communities of the chance to complete their life cycles.

And then – inevitably – there is the reverse: areas of fynbos that burn too often. The key to the fire regime is to have at least 15 years between burns. It varies according to type and location but 15 years is a good yardstick. If fynbos burns too often, those plants that are slow-growing like big Proteas don’t get a chance to mature and develop their seed. 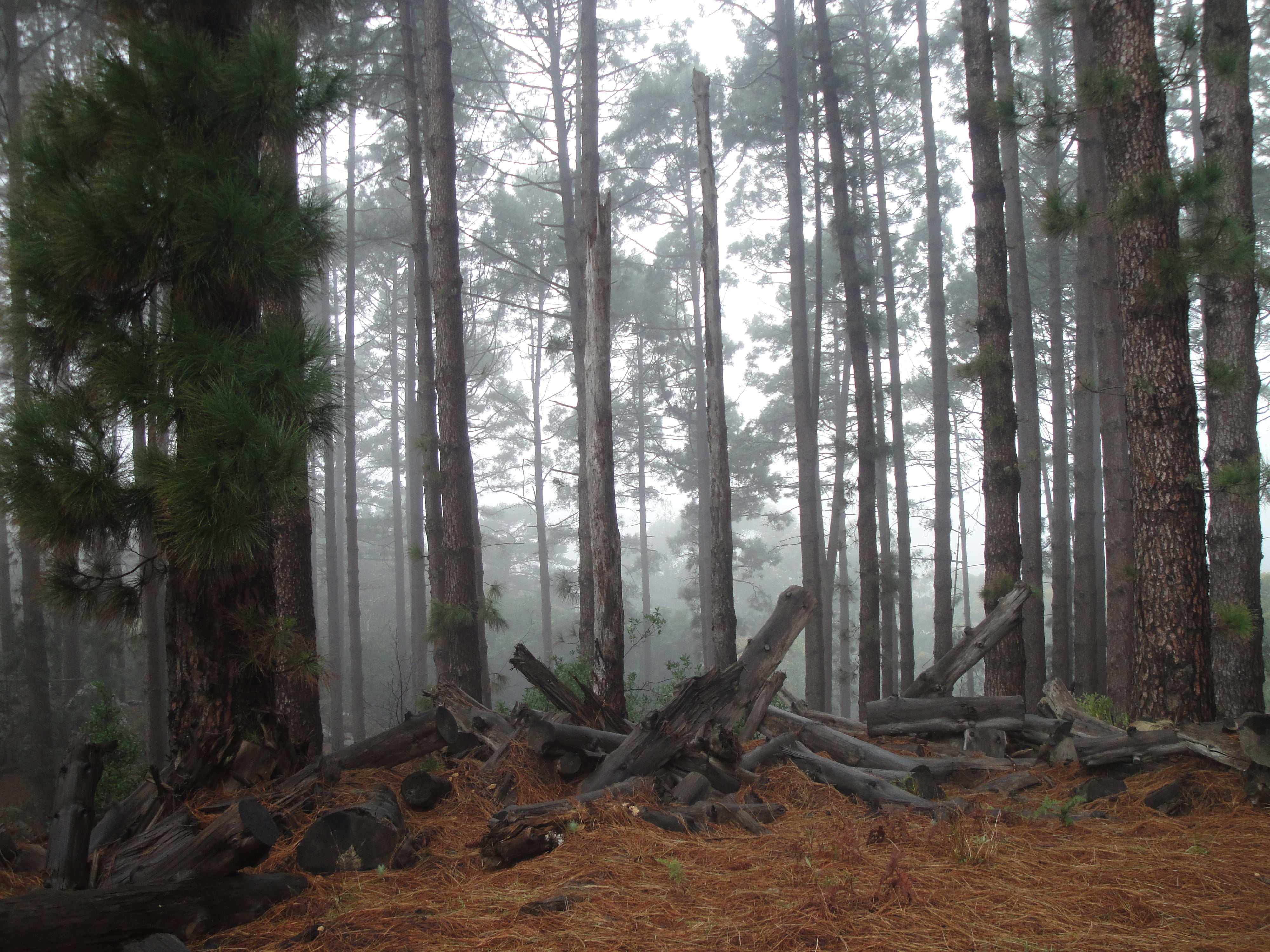 The future of fynbos? Unless radical measures are taken, invasive alien trees will continue to choke the mountains, suck up the water & create apocalyptic firestorms.

The future doesn’t sound great I’m afraid. Climate change is real – whatever its causes – and the trend lines are all pointing towards hotter, drier conditions in the Western Cape. More fires mean less wildlife: ten injured antelope were euthanised recently after fires near Cape Town, irrelevant for the Kruger Park or Okavango Delta but a huge chunk of biomass from these mountains.

More fires also mean a loss of natural diversity as faster-growing plants take over – especially alien grasses and non-indigenous trees – quickly smothering the post-fire mountains and killing off fynbos. These trees – mostly Australian wattles and eucalypts and Mediterranean pines – are even more flammable than fynbos and so the situation gets worse: more fires that are hotter and burn longer with less fynbos recovery and the increasing spread of alien vegetation.

But my guess is that fynbos will survive – somehow. It will become less diverse (we’ll lose many species) but other plants will adapt. Quicker-growing, more fire-tolerant species will come to the fore, perhaps more succulents will appear as the climate dries up. Who knows: perhaps we’ll go through a wetter spell and the forests will return. But until then, stand by for more fires.