FYNBOS BIRDS: WORTH WALKING FOR 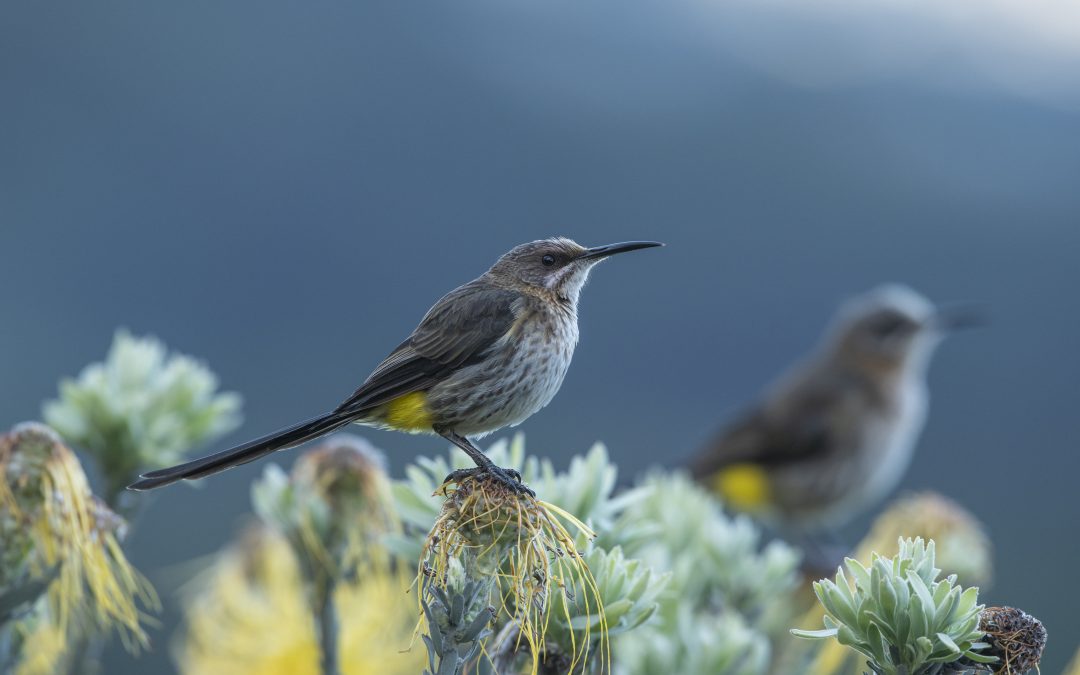 In the 1980s, a pair of British researchers decided to see just how many birds live in fynbos. For two years they trapped and recorded fynbos birds at various sites across the mountains in the south-western Cape. One place was Swartboskloof – Black Bush Ravine – deep in the mountains near Stellenbosch. It’s an idyllic place: a happily chattering river runs through the indigenous forest and pristine, highly diverse fynbos. Guess how many different birds they averaged in a hectare? In two years of study. Nine. I’ll repeat that in case you think it was a typo. Nine.

Despite its floral extravagance, fynbos is laughably short of animals of all sorts. It’s a consequence of several factors such as low nutrition and energy loads in the ecosystem; for birds, there are few grained grasses or fruiting plants in fynbos, no thundering herds or swarms of juicy insects to feed off. And don’t forget that the whole place disappears under raging flames every 10 or 20 years.

There’s also – interestingly – a general reduction in birds species in Africa as you travel south from the equator (imagine how many birds you’d rack up in a Ugandan forest over two years) as well as a curious lack of endemics – birds unique to fynbos. This puzzles scientists, given the ridiculous number of endemic plants in fynbos – 160 on the Cape Peninsula alone. Geological isolation (again, the Cape Peninsula), an ever-changing landscape and climate (ditto) tends to drive uniqueness in plants and animals – think the Galapagos Islands as well as Table Mountain.

The low number of endemics may be because fynbos birds have evolved more generalist-type behaviour to take better advantage of the ecosystem’s meagre resources so there’s no need for so many niche-specialists. But perhaps more obviously, birds can fly and so are not shackled to the whims of the Cape’s micro-environments like plants are. If the going gets tough, they flap to freedom.

But what birds there are in fynbos draw birdwatchers from all over the world. Throw in the entire fynbos biome – the mountains, the lowlands and the coast – and there are around 250 bird species, many of which are not only wonderful to look at but are also gaspingly rare in the sense that they can only be seen in the fynbos biome – our endemics. Witness the Holy Grail of Cape birding: the Fynbos Six – the Orange-breasted Sunbird (Anthobaphes violacea); Cape Sugarbird (Promerops cafer); Cape Siskin (Crithagra totta); Cape Rock Jumper (Chaetops frenatus); Protea Canary (Crithagra leucoptera); and Victorin’s Warbler (Cryptillas victorini). As it happens, the first two are easy to see in fynbos. The next two can be found without too much difficulty if you know where to look but the last two are oh-my-gosh difficult to get.

So, accompanied by American naturalist Ivan Parr who took most of the images, let’s take a stroll and look at some of the easier ones. 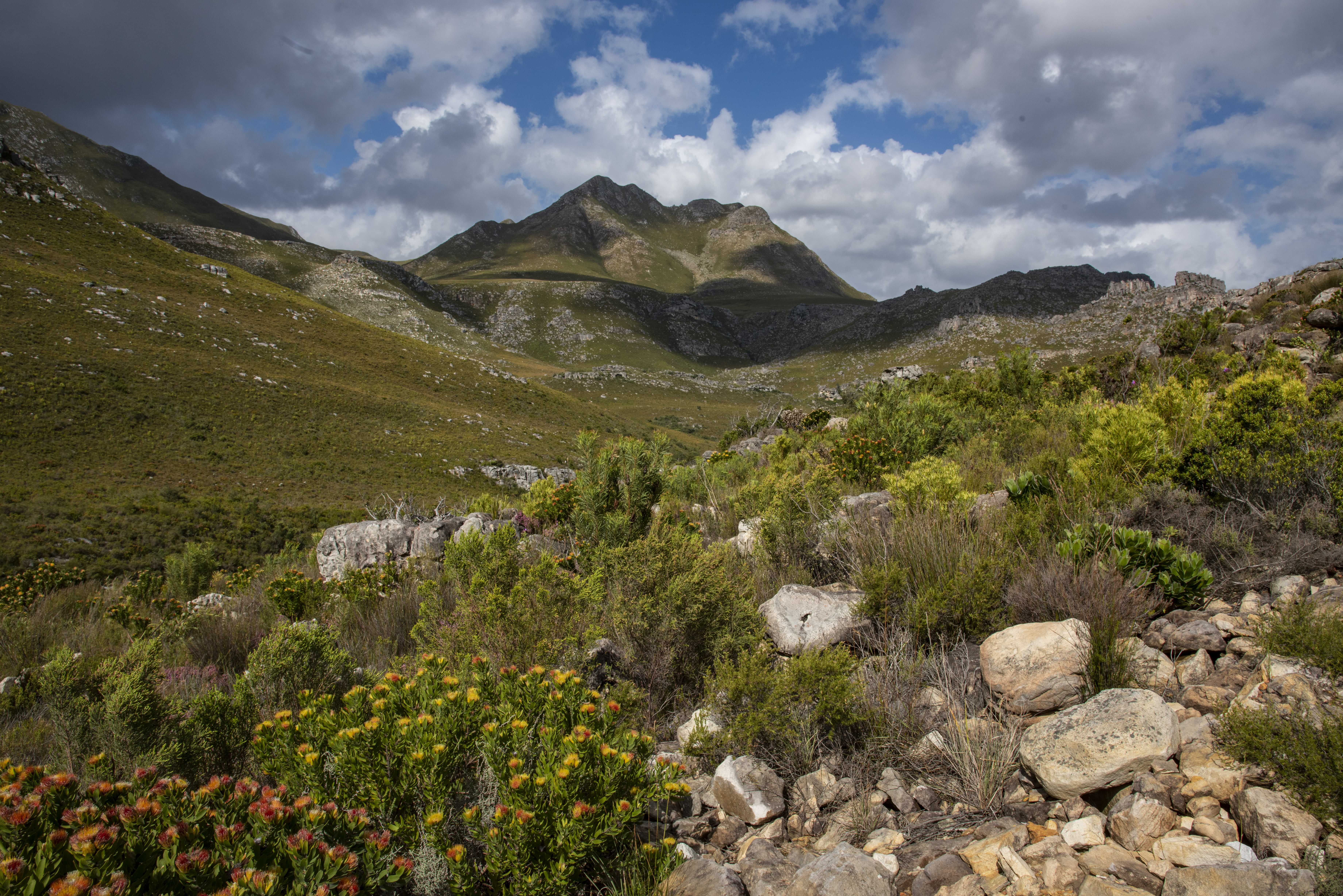 Bursting with flowering plants of all description, mountain fynbos is nevertheless a strong contender for Worst Birding Biome in South Africa. This & title image kind courtesy of Ivan Parr (USA)

We’ll start in mountain fynbos. There’s not much up there to be honest – a full day spent mist-netting in the Swartboskloof experiment yielded an embarrassing total of four individual birds – but it’s where the specials are, including the Fynbos Six. The skies are patrolled by ravens (Corvus albicollis) and raptors – the Rock Kestrel (Falco rupicolus), Peregrine Falcon (Falco peregrinus), Jackal Buzzard (Buteo rufofuscus) and the imperious Verreaux’s Eagle (Aquila verreauxii), the latter seen regularly when hiking out of Cape Town. Mountainside cliffs echo with the soft whistle of Red-winged Starlings (Onychognathus morio) while high altitude in summer brings you face to face with soaring swifts and swallows. You’ll always find a Familiar Chat (Oenanthe familiaris) in rocky terrain and if you’re lucky you’ll hear the ratchety-cratchety call of the Ground Woodpecker (Geocolaptes olivaceus) – the only woodpecker in the world to ignore trees – and maybe even the melodious song of Cape Rock-thrushes (Monticola rupestris) too.

But here’s the trick to seeing mountain fynbos birds: you don’t have to haul yourself up a mountain to see them. At many birding spots around Cape Town, the mountains have conveniently tumbled down to sea level bringing the birds with them (the Rooi Els Reserve for example), or have meandering roads and easy hiking trails through them (such as the Cape of Good Hope Reserve and the Silvermine Mountains).

Want it even easier? Kirstenbosch Botanical Gardens is legendary for the more common mountain fynbos birds – canaries, sunbirds and sugarbirds – as is Tafelberg Road running along the base of Table Mountain by the cable car. 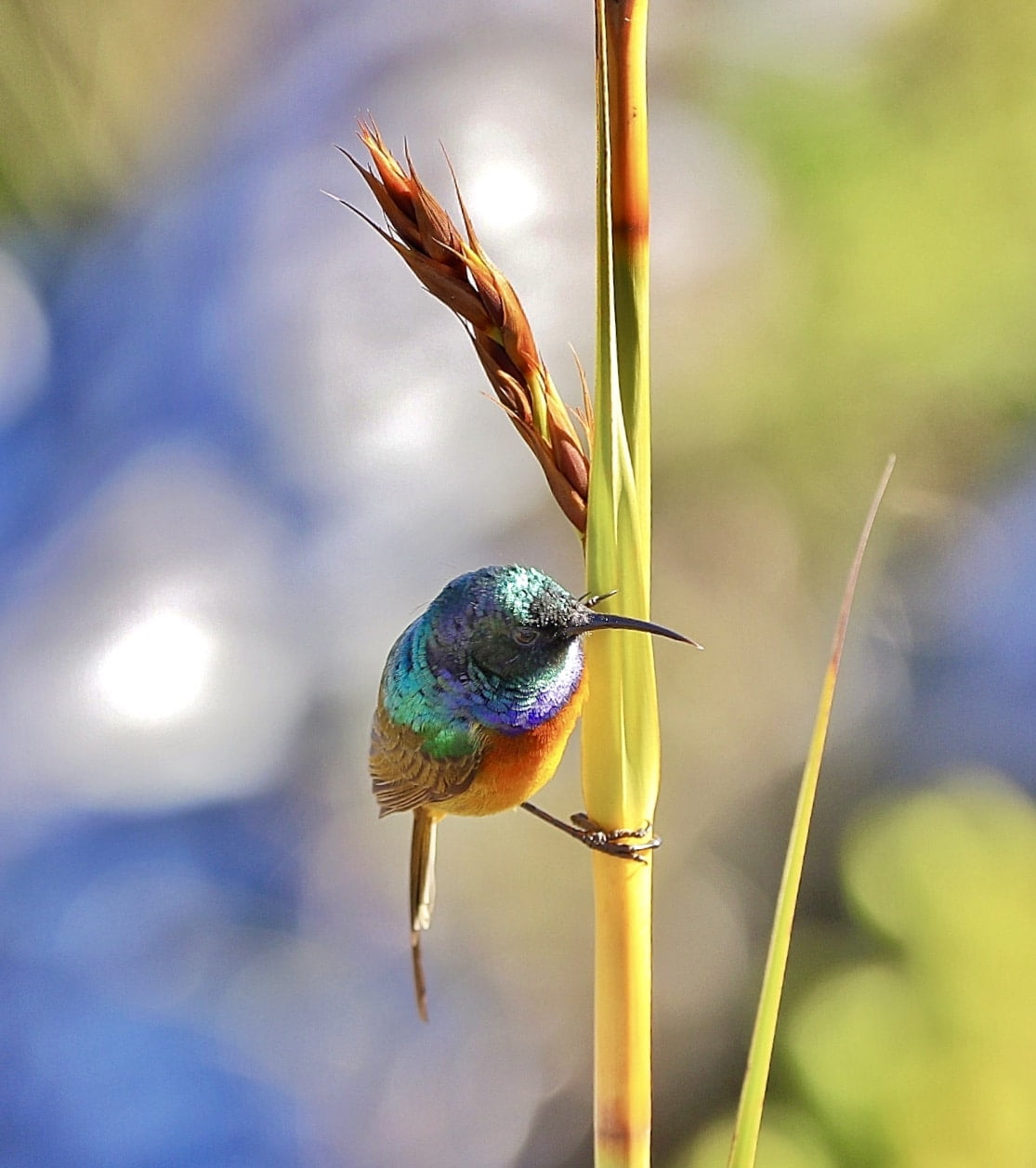 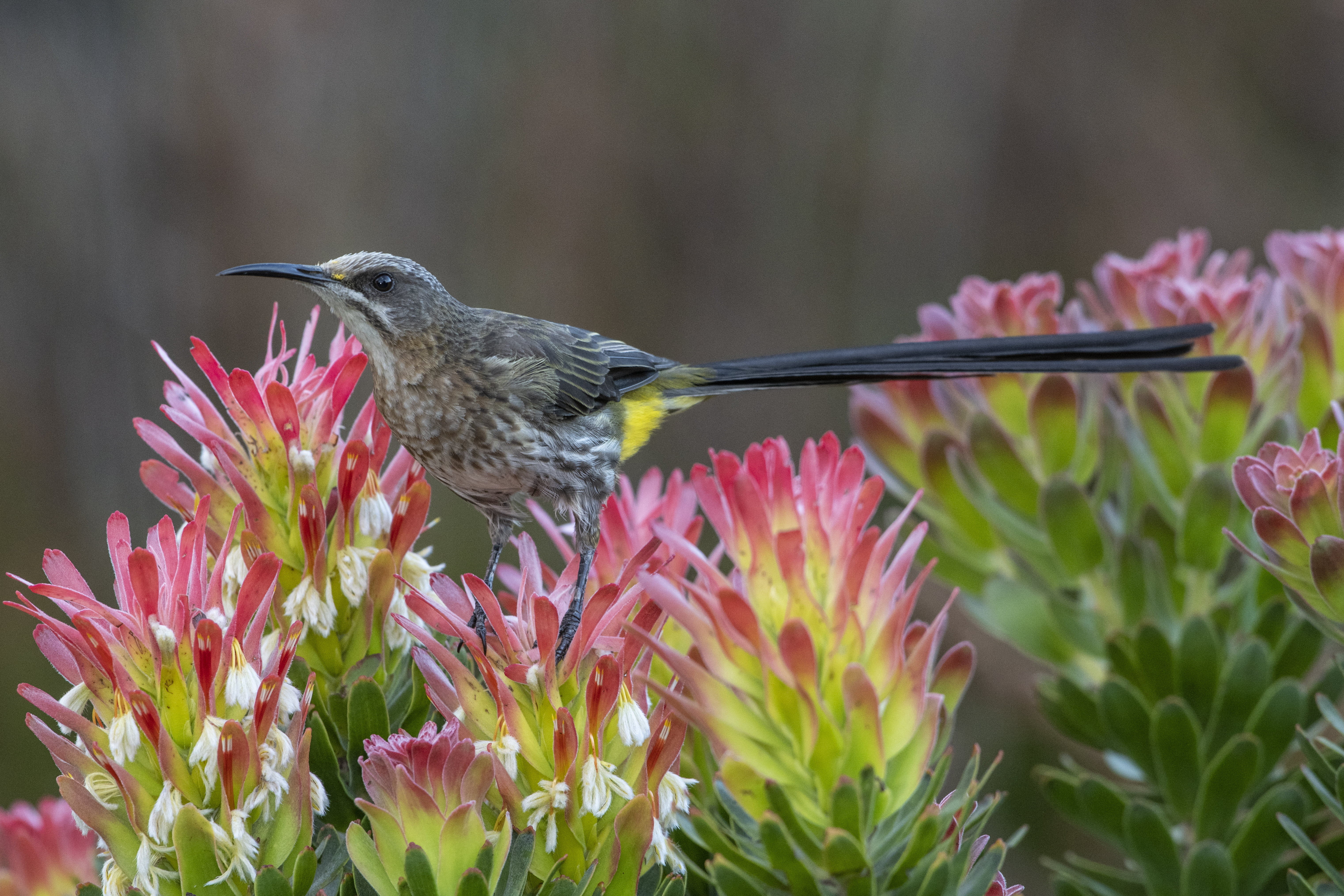 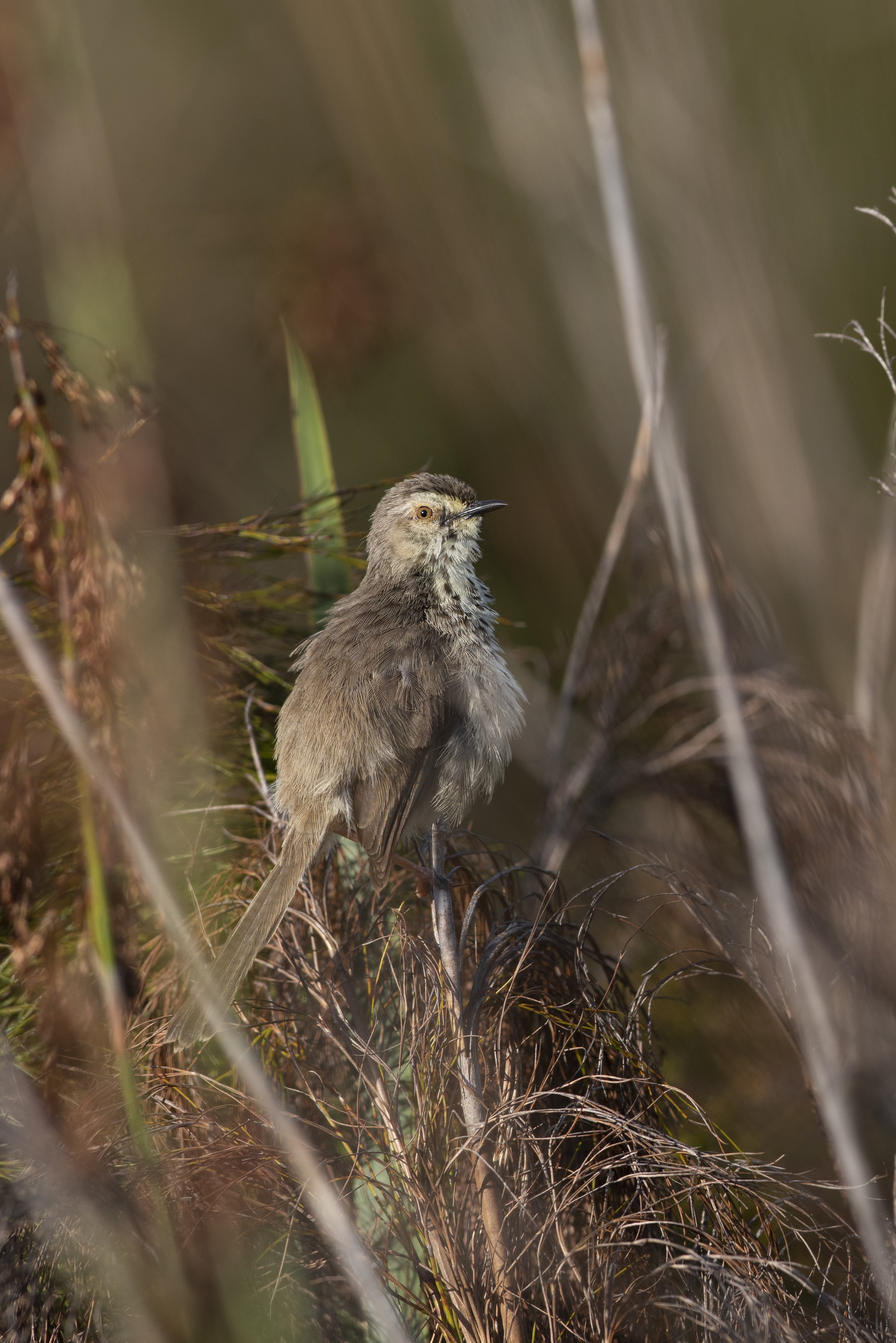 The scolding pinkity-pink call of the Karoo Prinia (Prinia maculosa) is perhaps the most common sound you’ll hear in fynbos. It is, mercifully, one of the very few LBGs (Little Brown Jobs) in the biome. Image kind courtesy of Ivan Parr (USA) 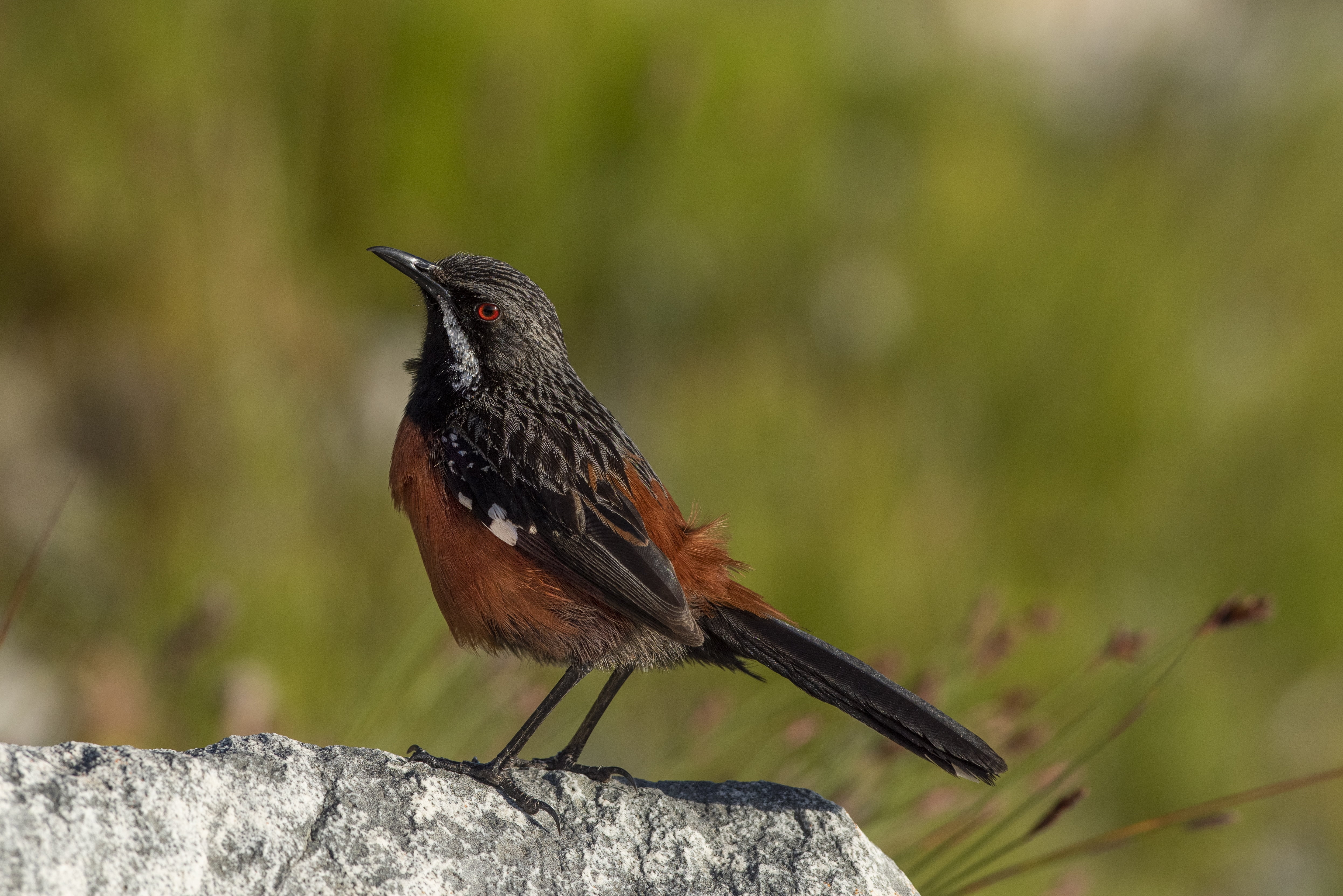 GOTCHA! Of all the fynbos birds, it’s the Cape Rock Jumper (Chaetops frenatus) that everyone wants the most. Usually a bird of high, remote mountains, it can be found in easier places … Image kind courtesy of Ivan Parr (USA) 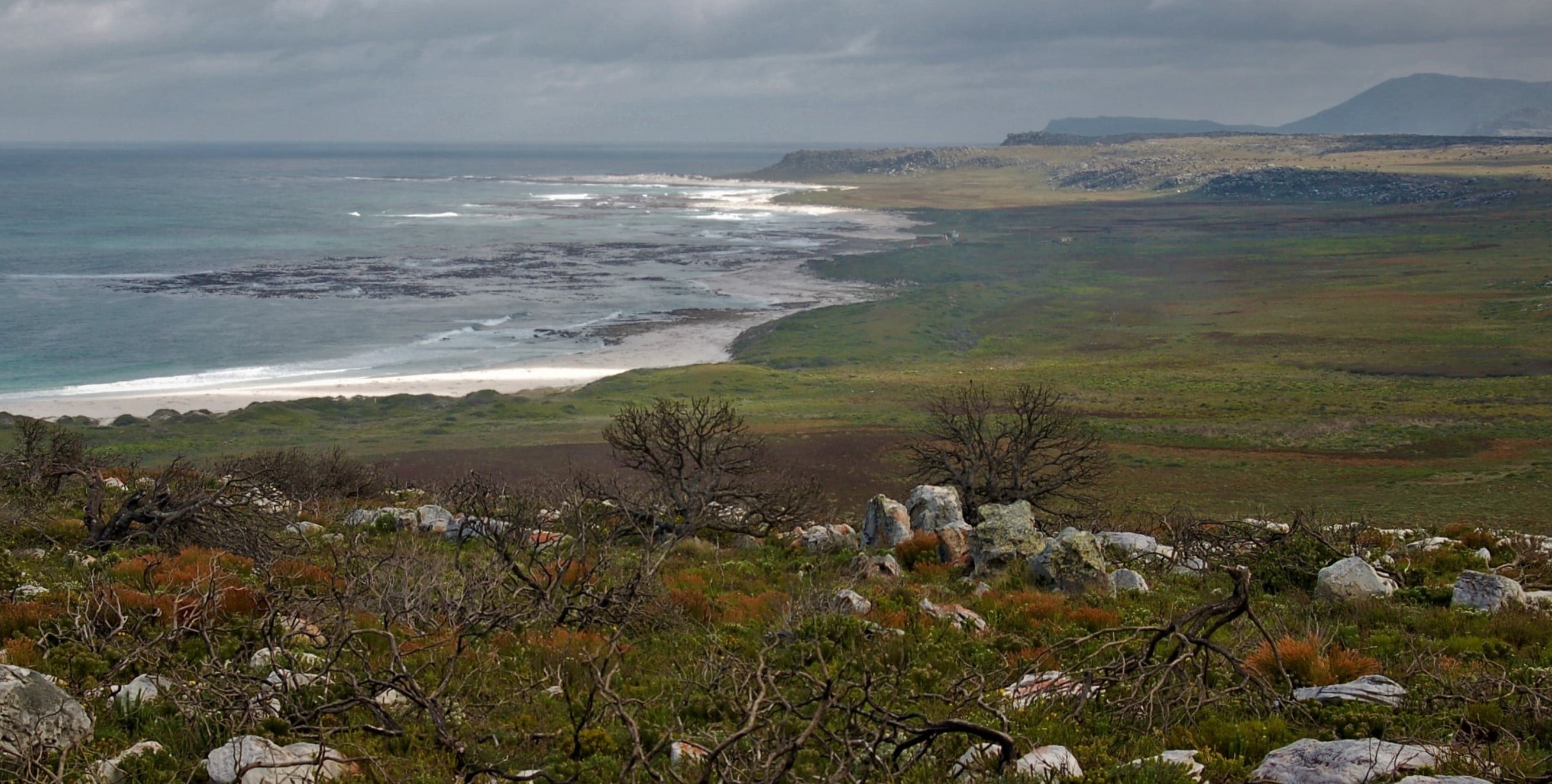 Pristine Lowland Fynbos & Coastal Strandveld in the Cape of Good Hope Reserve: the basic rule in this ecosystem is that food availability increases as you get closer to the ocean.

Move off the mountains and onto the lowland and coastal fynbos, and you’ll start hearing and seeing different birds. More of them too: there is usually water in the lowlands, thicker and more productive vegetation. Dense, damp fynbos is favoured by several local specials – the Cape Grassbird (Sphenoeacus afer) for example, and the Yellow Bishop (Euplectes capensis). Closer to the ocean and Strandveld vegetation appears, offering more food than fynbos – what I like to call my Three B’s: berries, bugs, and bulbs.

There’s not much lowland fynbos left (it generally has holiday homes sitting on it these days) but perhaps the best place to see the lowland/coastal avifauna is in the Cape of Good Hope Reserve, less than an hour from Cape Town. The birds – and other animals – of the Olifantsbos area on the Atlantic coast recently reduced my party of Alaskan field biologists to stunned silence (no easy task I assure you) and that was before we managed to get out of the car park. 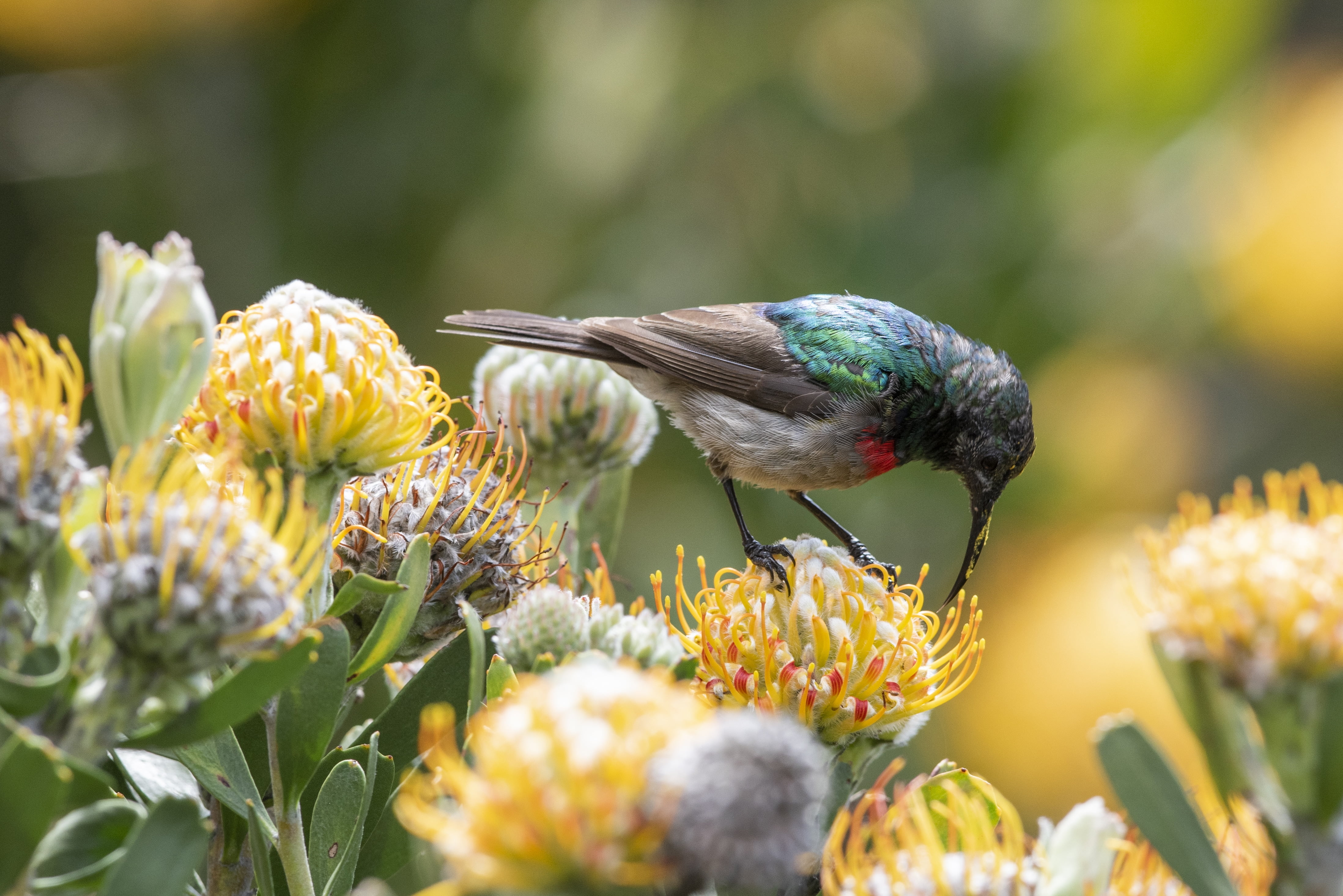 Taking over from his Orange-breasted cousin at lower altitudes is the Southern Double-collared Sunbird (Cinnyris chalybeus). Have a closer look at the bird’s bill & you can see pollination at work. Image kind courtesy of Ivan Parr (USA)

You’ll never see a Dusky Flycatcher (Muscicapa adusta) up in the mountains but there are plenty of them near the coast where the insect loads are far higher. 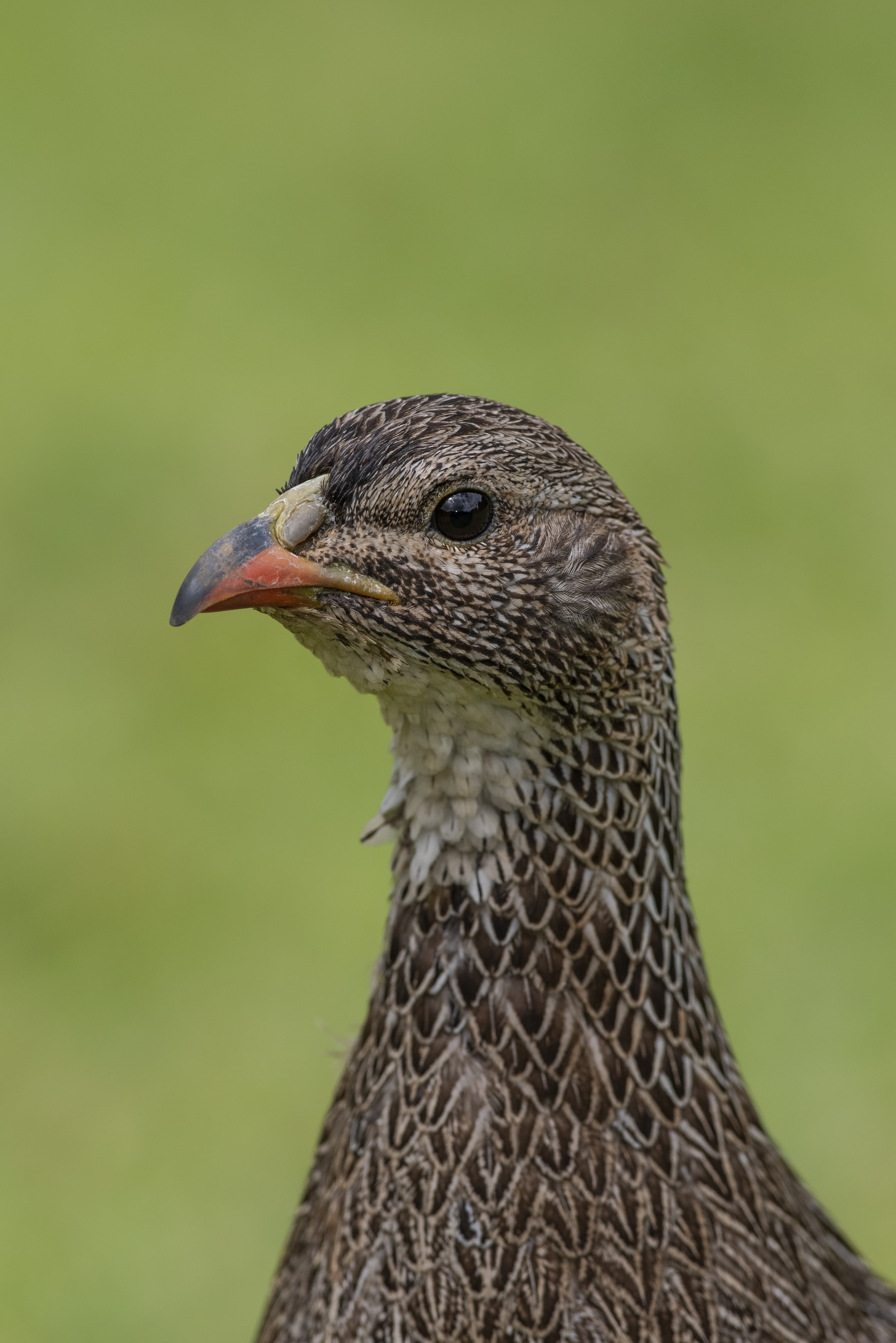 Making a living by scratching for bulbs & bugs in the richer lowlands, the Cape Spurfowl (Pternistis capensis) is often seen in small family groups, usually as they explode skywards from under your feet, crackling in alarm. Image kind courtesy of Ivan Parr (USA)

A surprise resident in fynbos is the Ostrich (Struthio camelus) – these are the cryptically marked chicks; most people expect to see them with a savannah background but they are perfectly at home in the coastal fynbos of the Cape of Good Hope Reserve.