What is Fynbos? An Easy Introduction 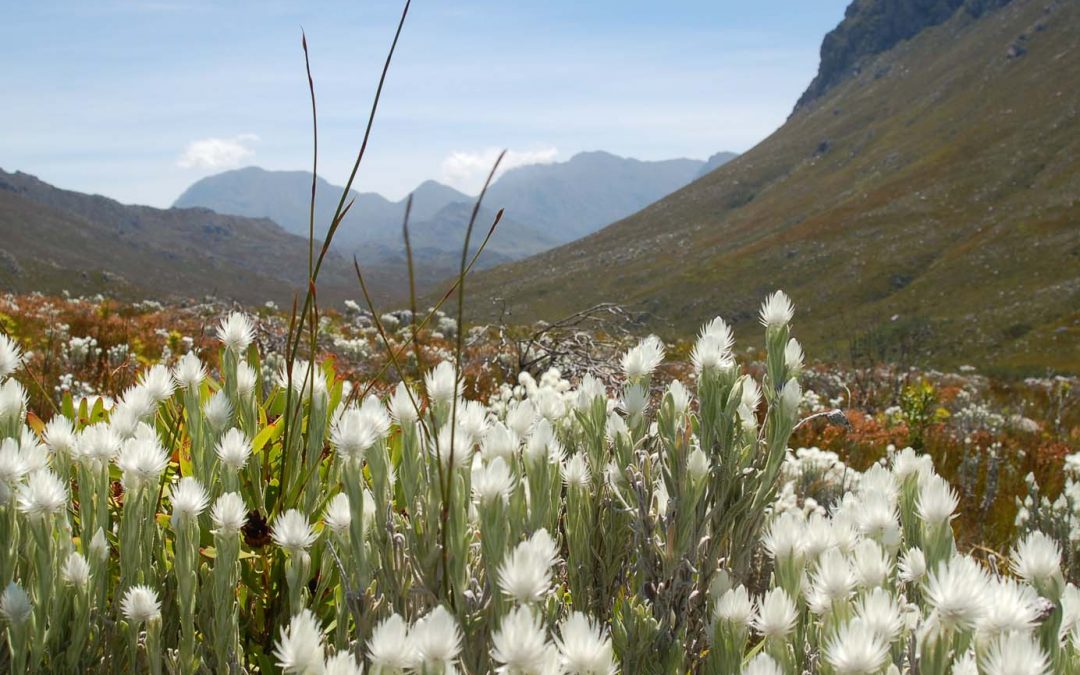 Apart from “Are we nearly there yet”, the most common question I am asked while hiking in these Cape mountains is: “What actually is fynbos?”

It’s a good question. Is it a bush? Or lots of them? And why does such apparently insignificant-looking vegetation elicit such shiny-eyed excitement in otherwise quite normal people – your writer included. Oh, and since we’re on the subject, what’s all this about fire?

Time to sort it all out: here are my Top Five Questions about fynbos.

The name originates from an Old Dutch word: ‘fine bush’. It refers not to one but to all the plants associated with the mountains of South Africa’s Cape region. It’s like saying ‘tropical forest’ or ‘savannah’ – a vegetation type in other words. These mountains – made of ancient, weather-beaten sandstone – extend from the Western Cape’s Cederberg range a 3-hour drive north of Cape Town to the mountains of Grahamstown in the Eastern Cape, a 2-day drive away. 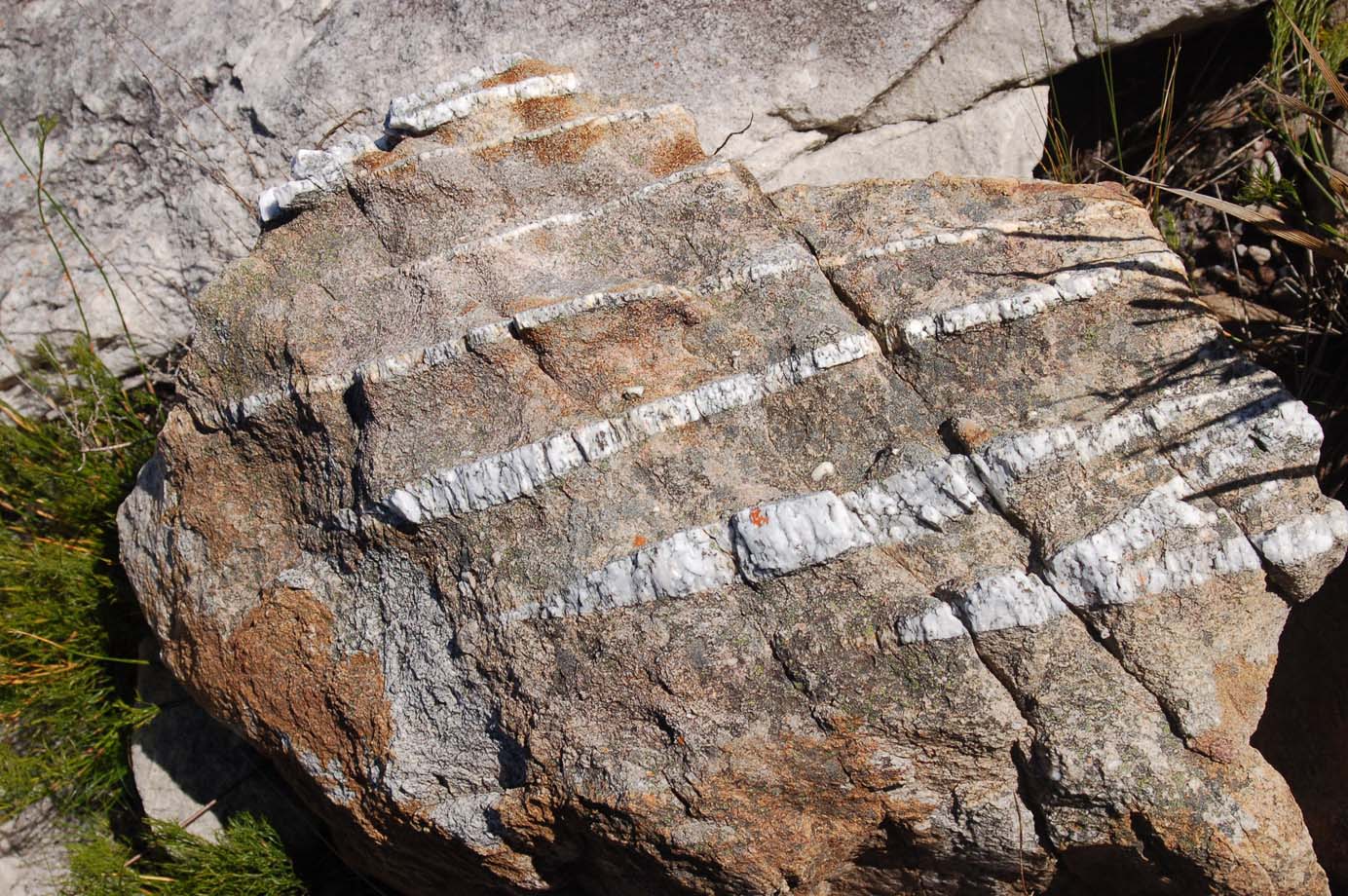 What it is all based on: ancient, quartzitic sandstones that were the bottom of the sea 400 million years ago. 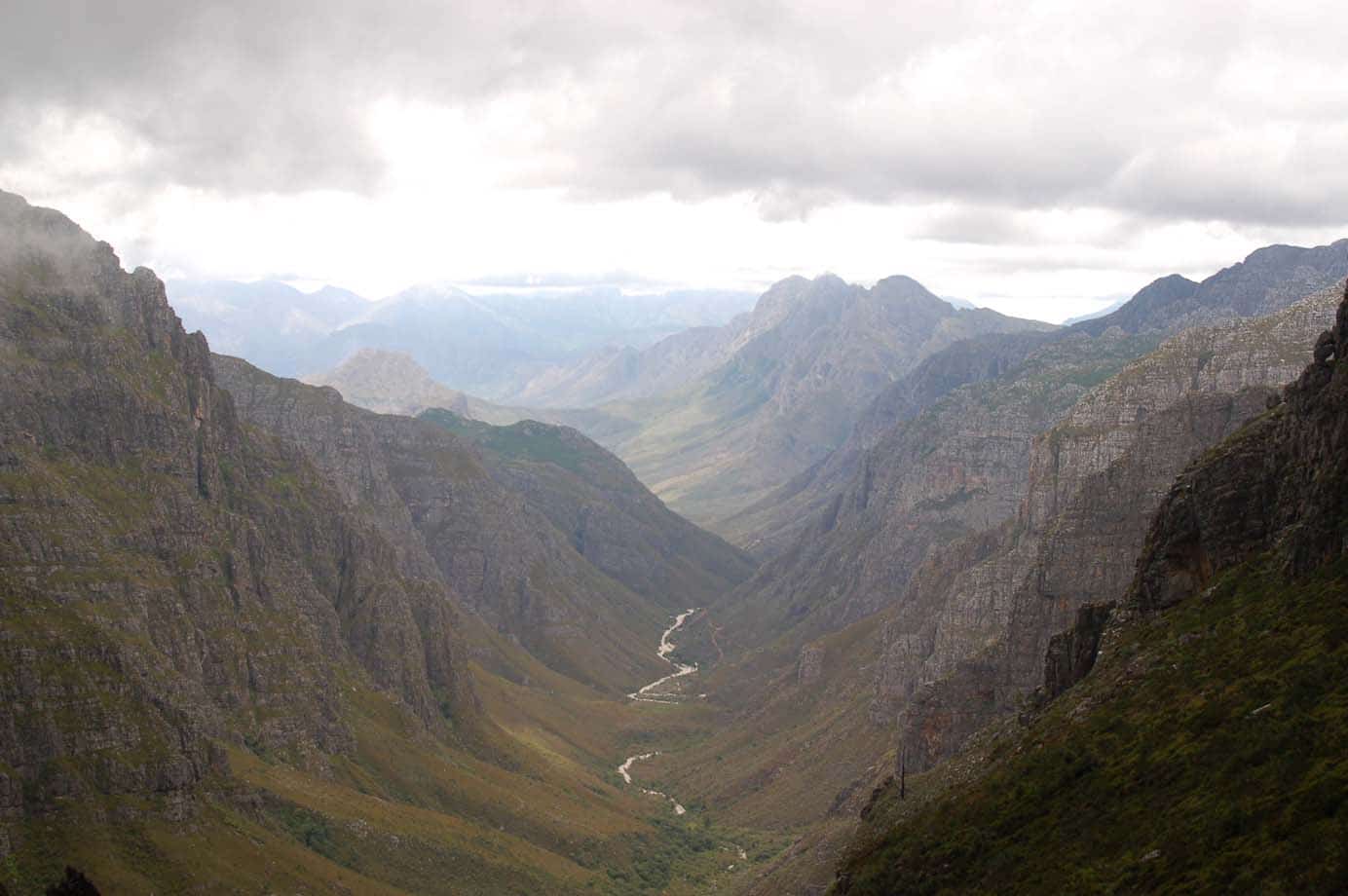 Fynbos appears unimpressive from a distance. It is treeless, scrubby and brown – ‘fine bush’ in the sense of thin, straggly and not very productive. It is a heathland – resembling similar environments in Europe, Australia and South America growing in nutrient-deficient soil under tough climatic conditions. Fine bush indeed, but on closer inspection fynbos reveals itself to be a mesmerising mosaic of plants bursting with flowers every month of the year. Proteas are the most famous plants in fynbos but it’s the restios – the Cape Reeds – that define its presence. Other familiar names found in fynbos are heathers, irises, daisies and orchids as well as members of the citrus, pea and carrot families. 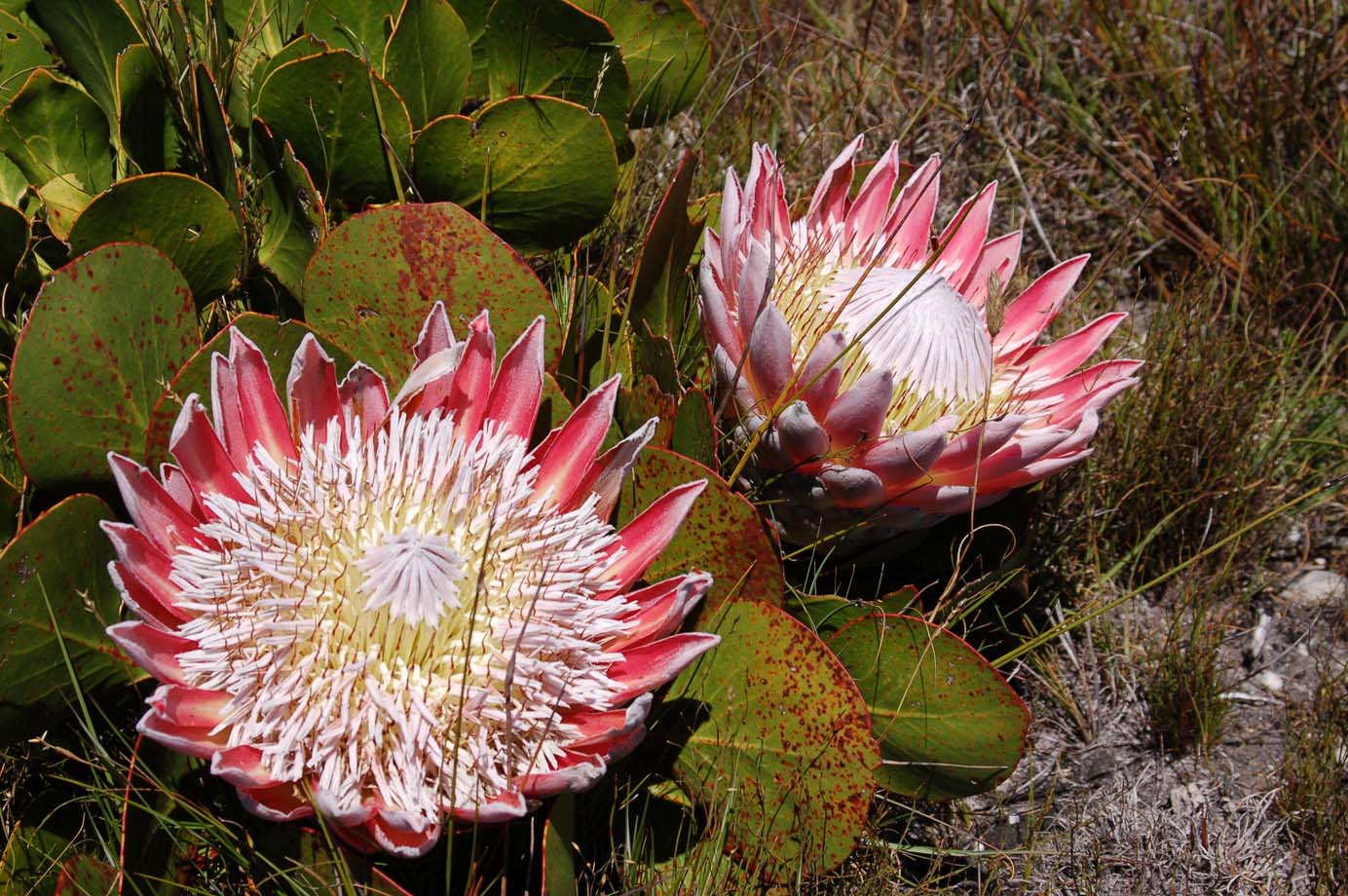 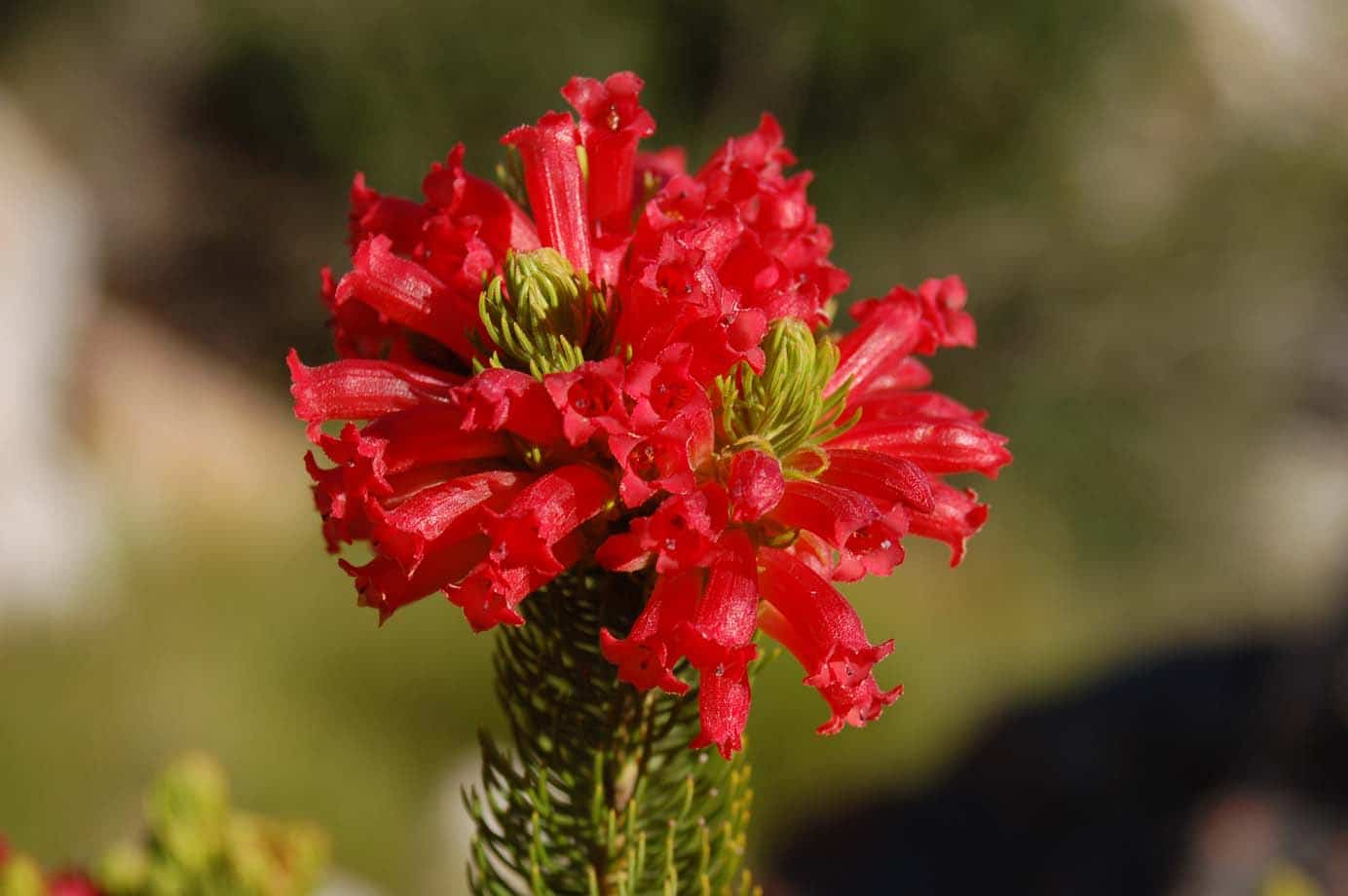 The heathers are present in huge numbers in fynbos, adapting to localised conditions to create hundreds of different species. 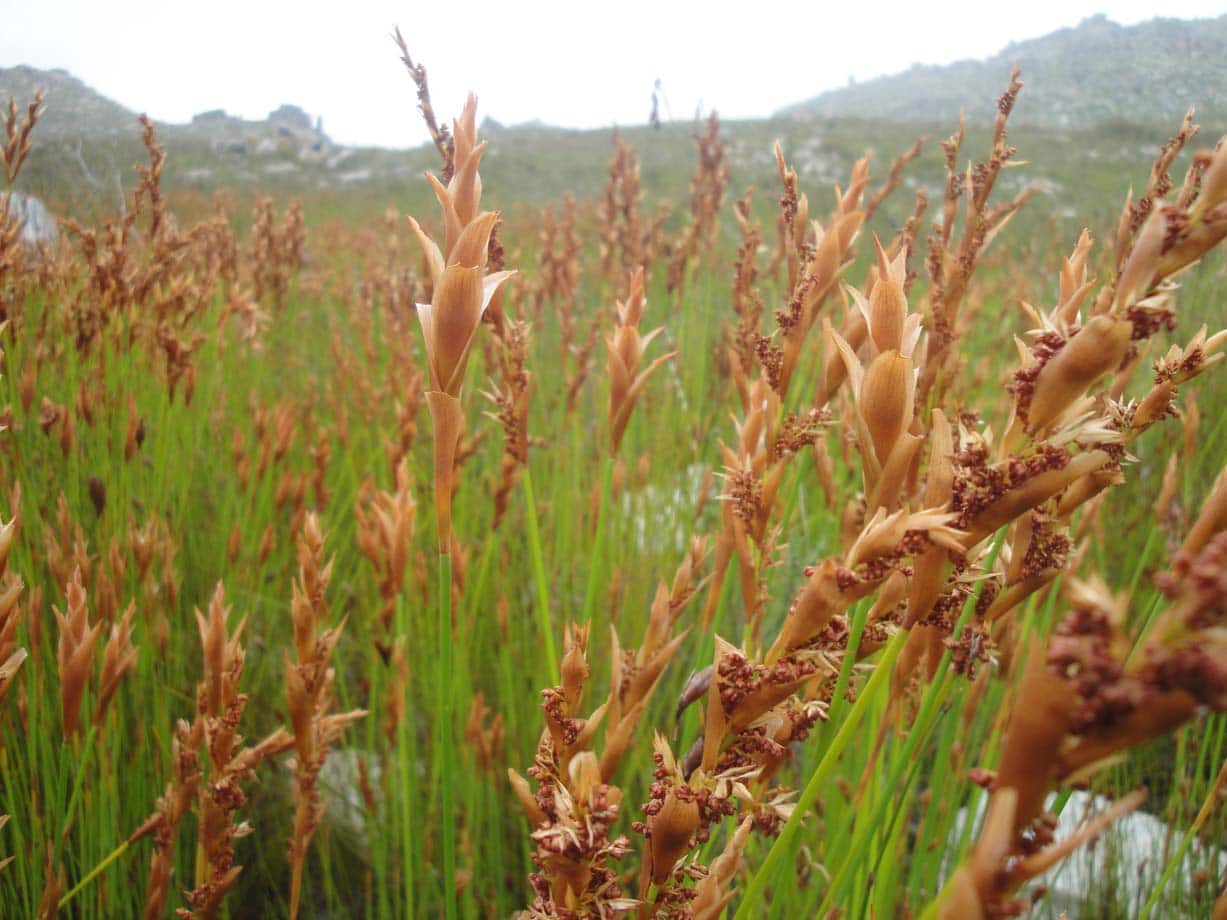 Replacing grasses, the Cape Reeds – Restios – are a key indicator of the presence of fynbos. The more you see of them, the tougher the environment.

2) What makes it so special?

Fynbos is the most studied vegetation type outside of Europe. Generations of scientists – including Charles Darwin – have been left open-mouthed in amazement at the stuff – and it’s not necessarily because it is so beguilingly beautiful.

The Blue Disa is one of the many orchid species in fynbos – indeed, a quarter of orchids in southern Africa are found on the Cape Peninsula. 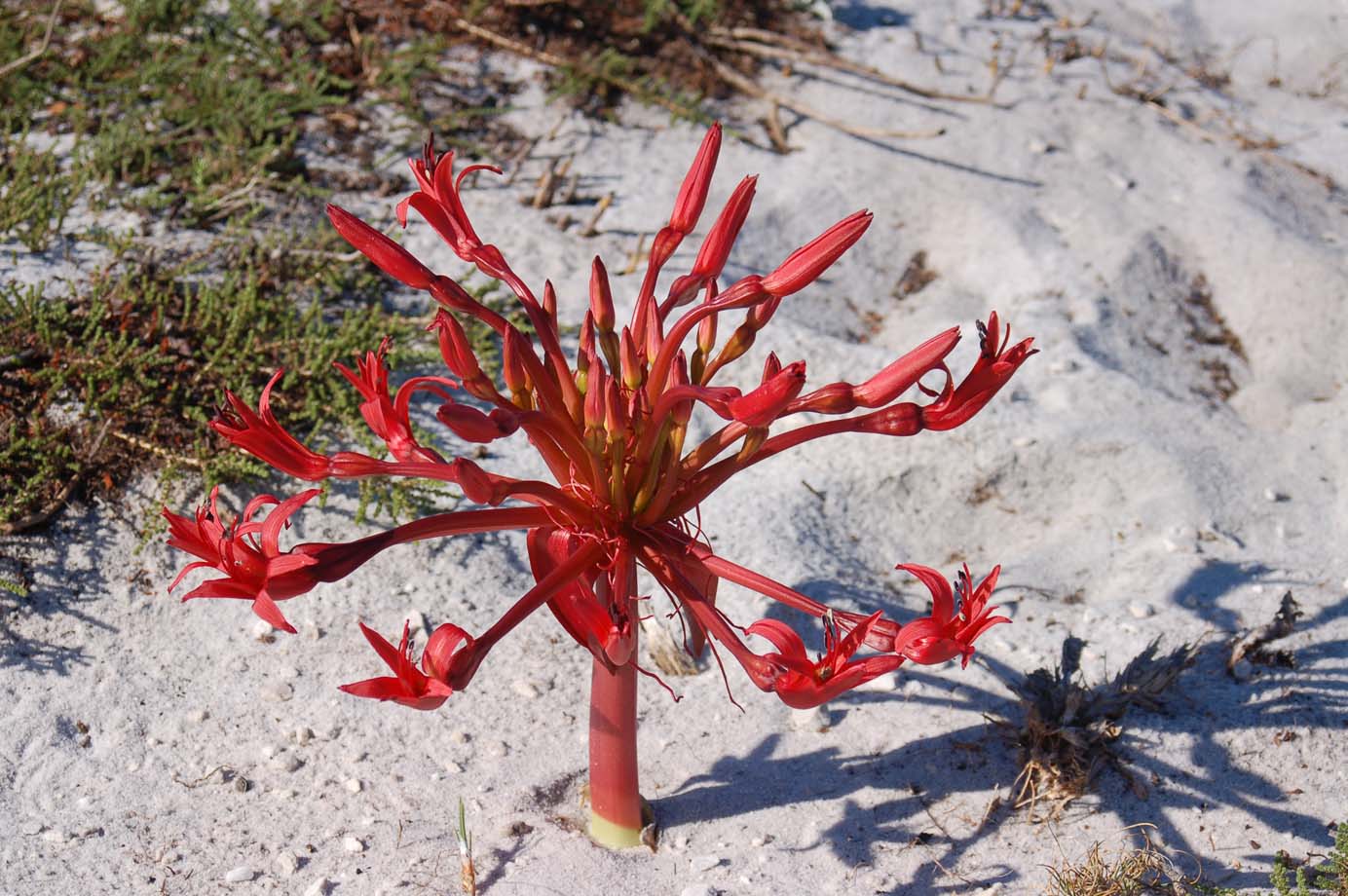 You find the bizarre as well as the beautiful in fynbos – the Candelabra Lily, only emerging for a few short weeks at the end of summer.

Two biological juggernauts collide in fynbos. Firstly, there is a stupendous number of plants species present. Europe, for example, has 20 different types of heather; the fynbos – covering an area the size of Portugal – has 652. And secondly, so many fynbos plants – around 70% – are completely unique to the region. Free from major catastrophe (an Ice Age for example) for millions of years, fynbos plants have had the time to adapt to every twist and turn of the mountains, thriving in micro-environments separated only by a few metres of altitude or millimetres of rain. The net result is the world’s most diverse plant habitat – even more than tropical rainforests. There are far more plant species on the 70 kilometre-long Cape Peninsula, for instance, than in the whole of the British Isles; drive to the mountains 45 minutes away and you have a similar number of plants but half of them are different. 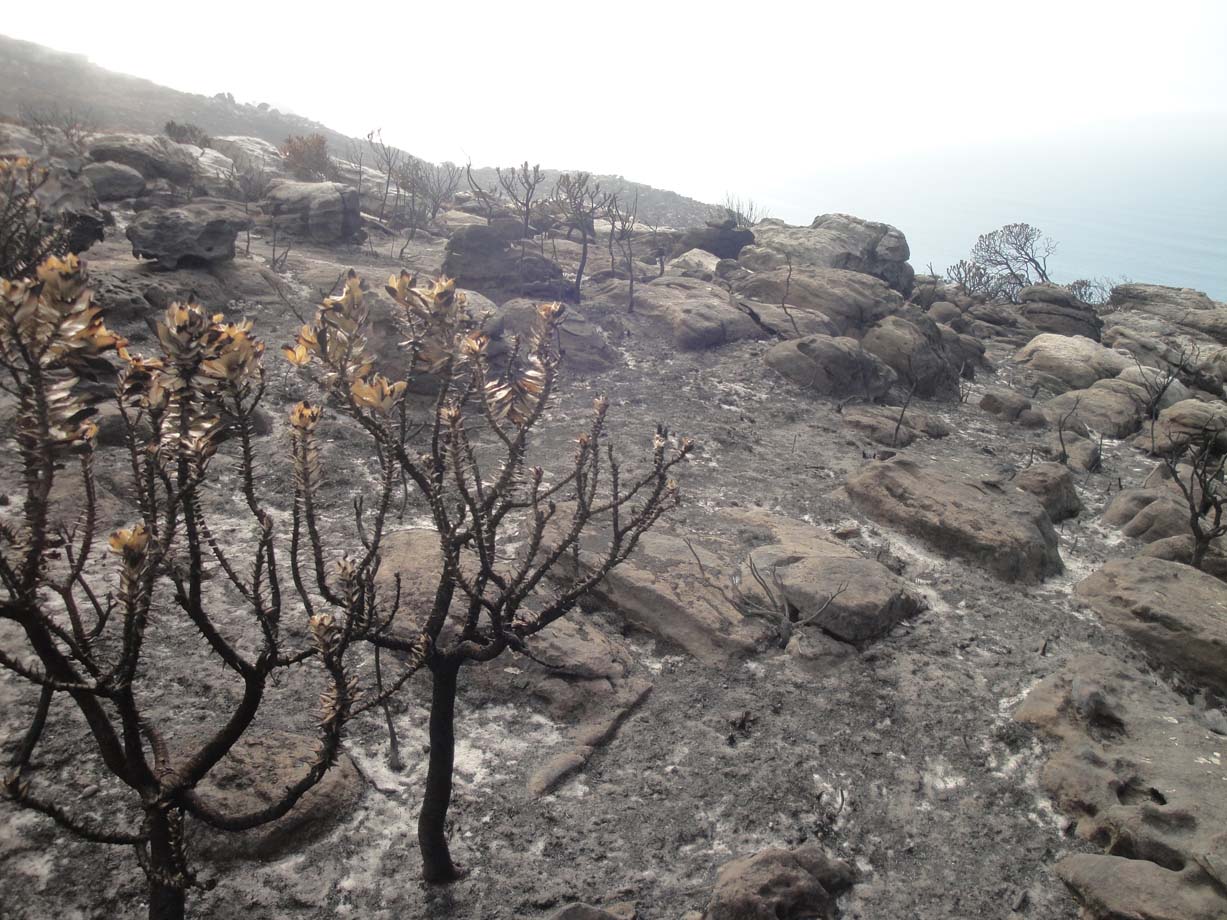 Fire reduces most of the fynbos to ash – these are the Silvermine mountains near Cape Town in March 2015 after a monstrous fire.

Simple: no fire, no fynbos. Every bit of fynbos you can see today has been repeatedly burned to the ground over tens of thousands of years. It covers the mountains because of fire. How so? Go back in time four or five million years and the Cape landscape was covered in thick, dripping forest. Two million years ago the climate dried up and fire was introduced to these hot, windy mountains. In the face of flames, trees retreated to fireproof ravines such as Table Mountain’s Skeleton Gorge. In their place came fynbos plants, many of which had been biding their time since the dinosaurs and were quick to adapt to the new regime: fire, wind, sun, few nutrients and little water.

Consequently, fynbos plants now require fire to complete their life cycle: the flames burn accumulated dead plant material to recycle nutrients back into the impoverished soil; the intense heat opens tightly-sealed seed-cones and triggers underground bulbs into growth. It gets more complex: the chemicals in fire such as ammonia act as stimulants for many protea species to burst into leaf from their blackened stump. It happens quickly too: within a week there are green shoots emerging from the charred sand. After a few months, the landscape is awash with colour as thousands of flowering plants take advantage of the new conditions, ironically making a post-fire environment the best time to see fynbos. 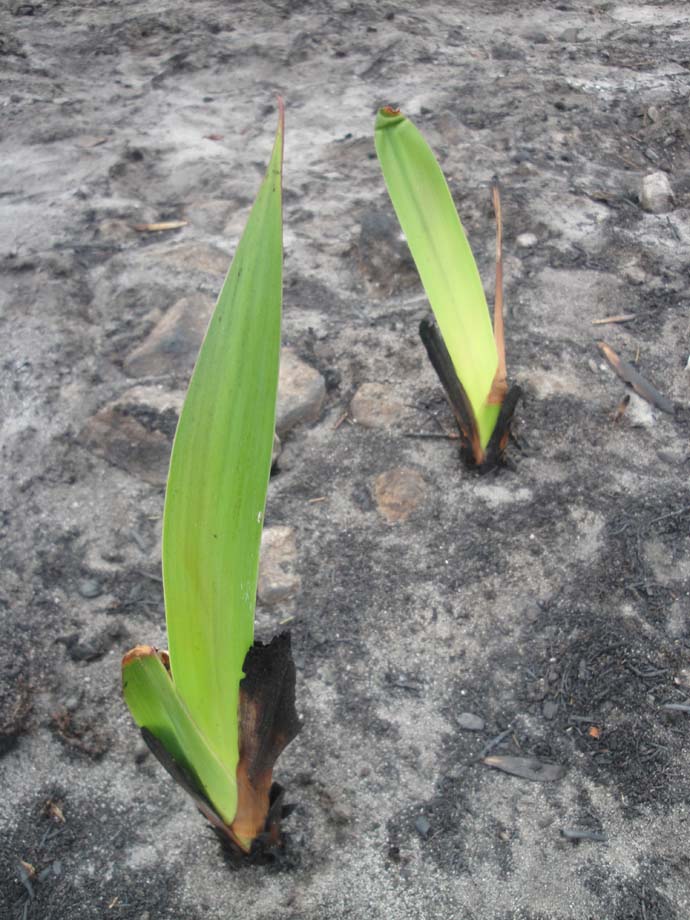 Within five days of the fire the fynbos has begun its recovery: here, Watsonias (a type of iris) push skywards from their underground bulbs. 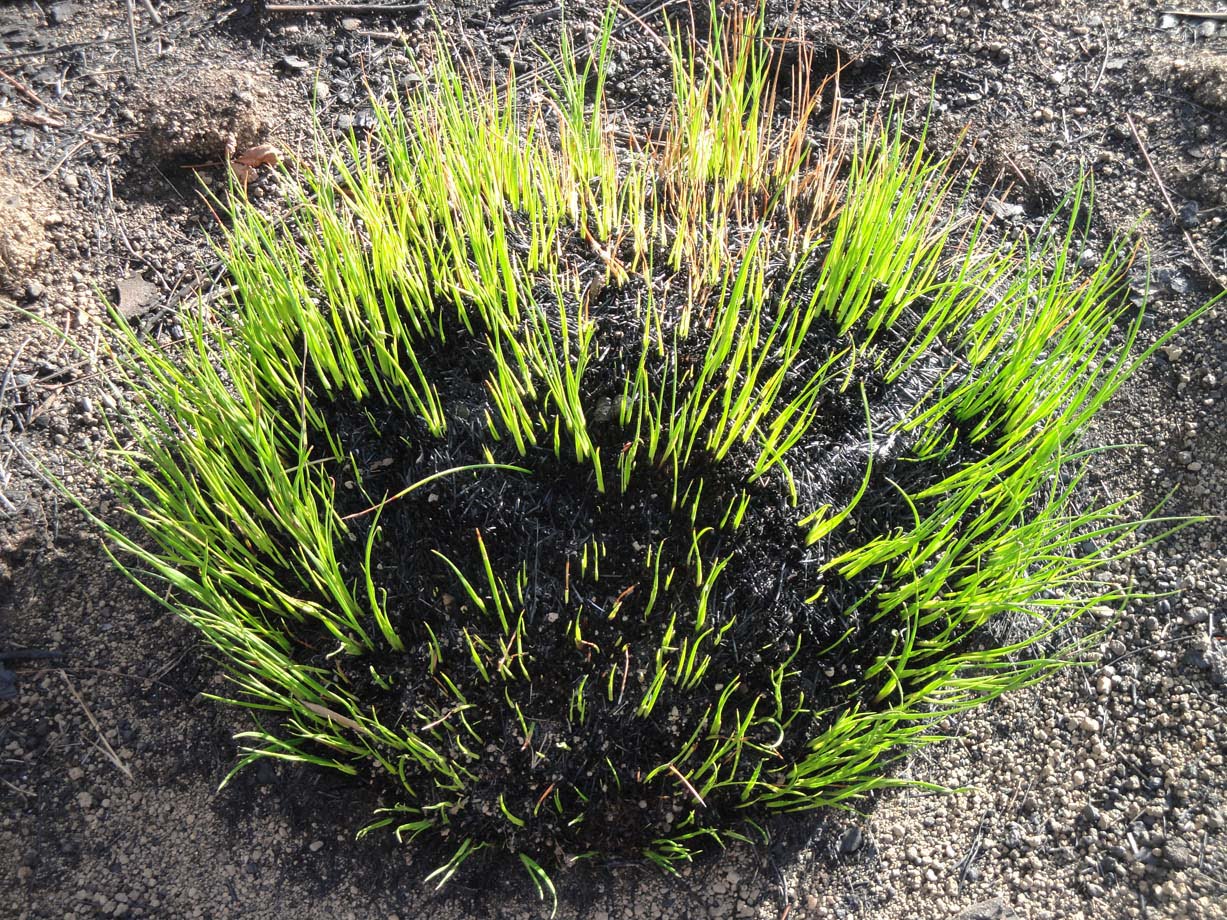 This Restio simply re-sprouts from its charred but fire-resistant stump, a tactic used by many fynbos plants. 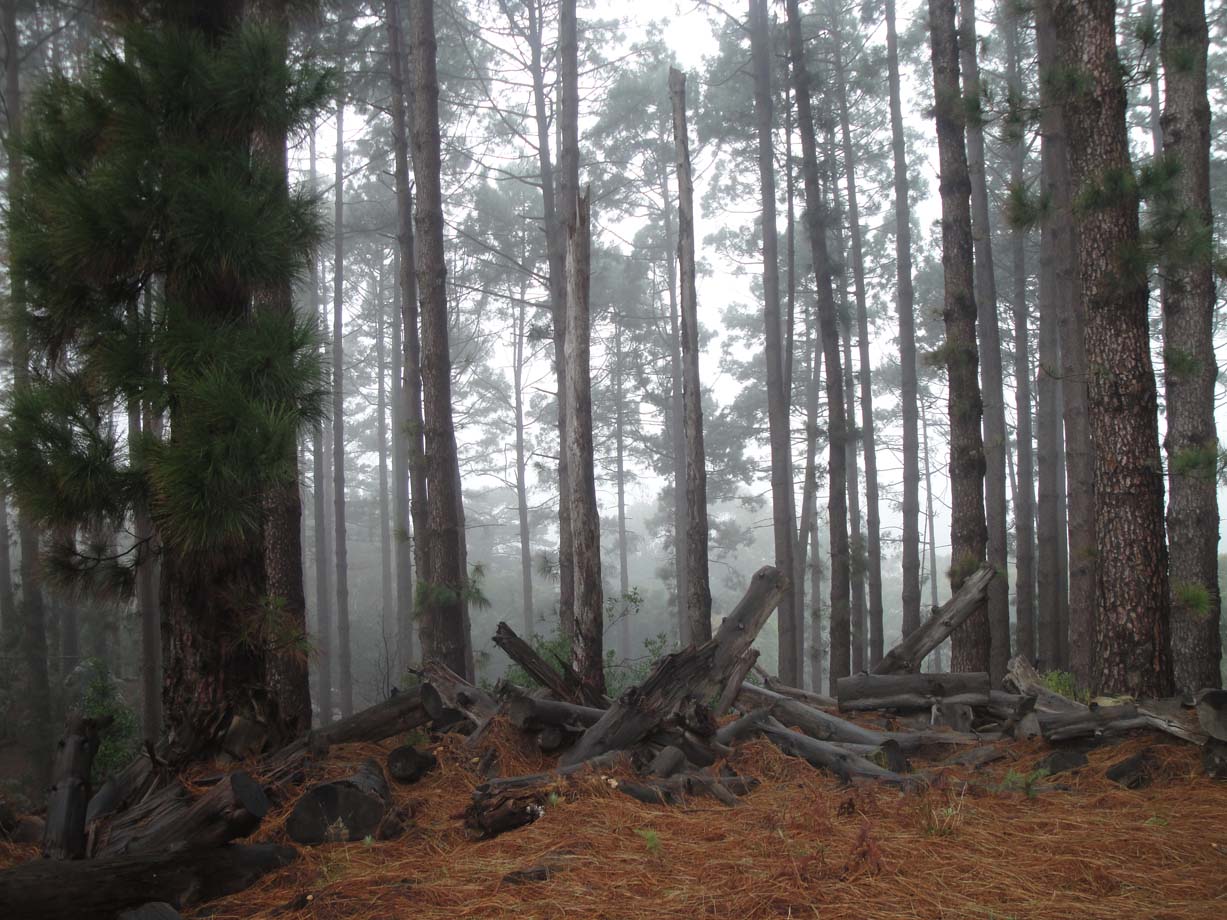 Yes, but perhaps not in a way that you might think. Fynbos will handle climate change in some form – probably as more succulent-dominated – and most of it is not in danger of being turned into car parks or shopping malls because fynbos usually grows on steep windy mountains swept by fire.
But what fynbos can’t handle are alien trees. Mediterranean pines, Australian eucalypts and acacias – trees that thrive in similar environments – overwhelm fynbos and turn flower meadows into dark, silent forests. Their march is relentless, their wind-dispersed seeds taking them into inaccessible ravines and watercourses, strangling the mountain ecology.

Fynbos is also endangered in many places due to an erratic fire regime. Although fynbos plants need fire, many of them take 15 years or so to build up their seed again. Therefore, the frequency of fires is crucial, and these days it is often the case that some areas burn too frequently (the lower slopes of Table Mountain) or not enough (ironically, the more remote parts of Table Mountain). And if the fynbos is infested with alien trees, fires become too hot, incinerating rather than stimulating. Witness the recent damage to the Garden Route town of Knysna where alien trees carried the mountain fire down into the urban area.

5) Why should we conserve it? 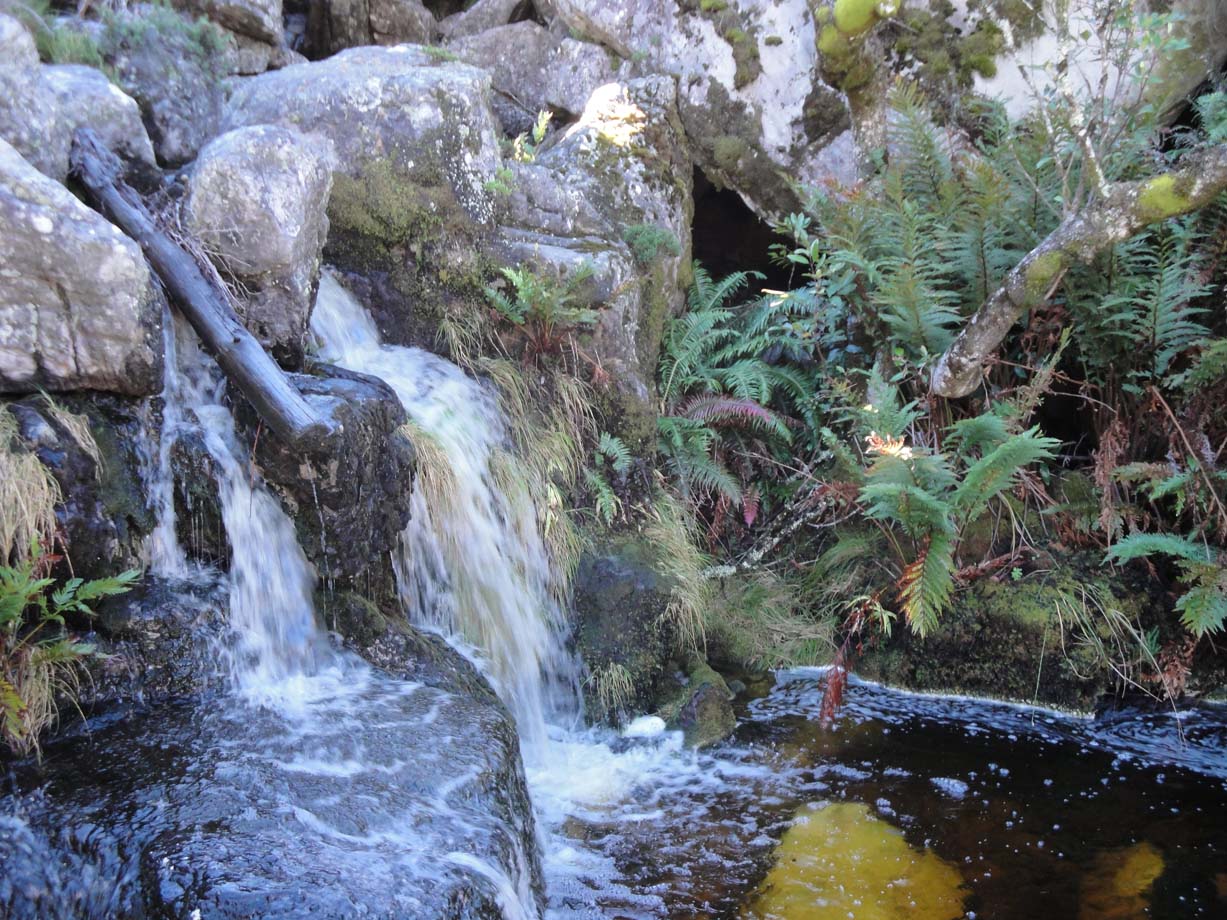 Mountain water on its way to becoming Cape Town’s drinking water; save fynbos & we keep the taps running.

There are many reasons to conserve fynbos. In the big picture, it guarantees the bio-diversity of these mountains and in turn provides us with a healthy, accessible natural environment. There are jobs and educational experiences in fynbos as well as recreation, tourism and research opportunities but the greatest reason to conserve fynbos at the present time is the need to keep water flowing out of Cape Town’s taps.

Fynbos-covered mountains are responsible for delivering one glass of water in five in South Africa. Some of the wettest places in the country are wild, soggy mountain tops covered in rare proteas. Fynbos allows up to 80% of the rainwater to run off and fill our rivers and reservoirs. Cover the mountains with pines and blue gums and you can say goodbye to up to 70% of the rain that falls on them. With Cape Town and much of the Western Cape currently gripped by a water crisis, it is as important to get rid of alien trees and preserve fynbos as it is to pack away your hosepipe and get a rainwater tank.