FYNBOS IN THE HOOD: THE CAPE FLATS EXPERIENCE 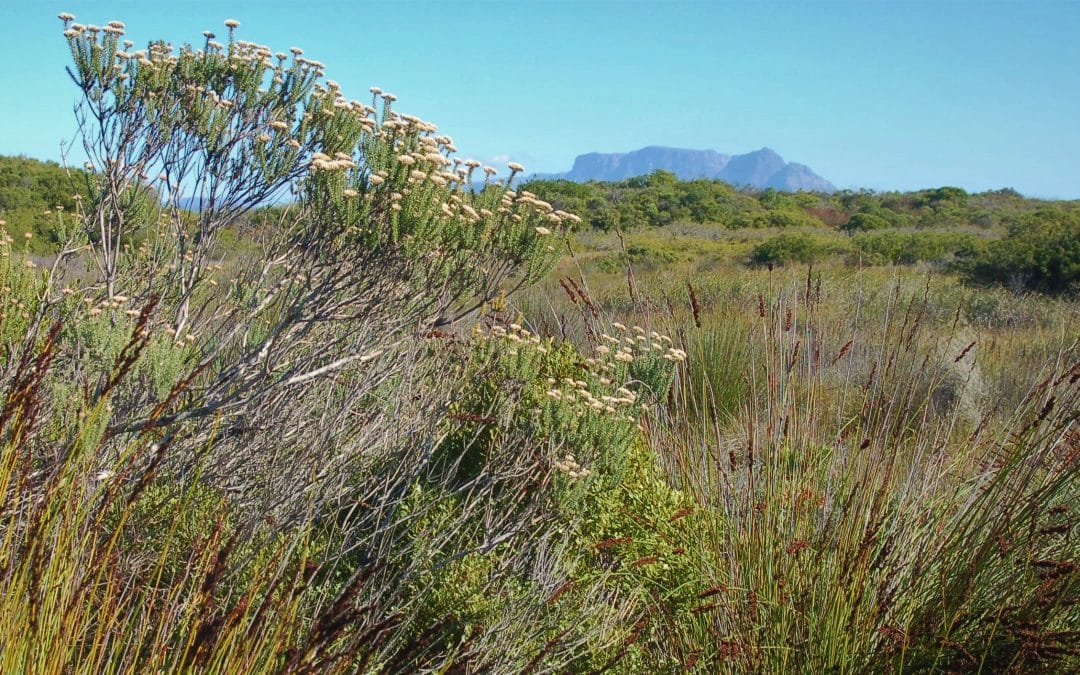 Not many visitors to Cape Town go to Bellville. A splodge of light industry and housing north of the city, it is perhaps ‘Jersey-side’ to New Yorkers; to Londoners it is Croydon. But travel to the University of the Western Cape’s Bellville campus and something extraordinary happens: marooned in this ocean of concrete and bleating traffic is one of the very last examples of the vegetation that used to cover the ‘Cape Flats’, the catch-all term for the less fashionable land that lies between the Cape Peninsula and the rest of South Africa. I went to take a look. 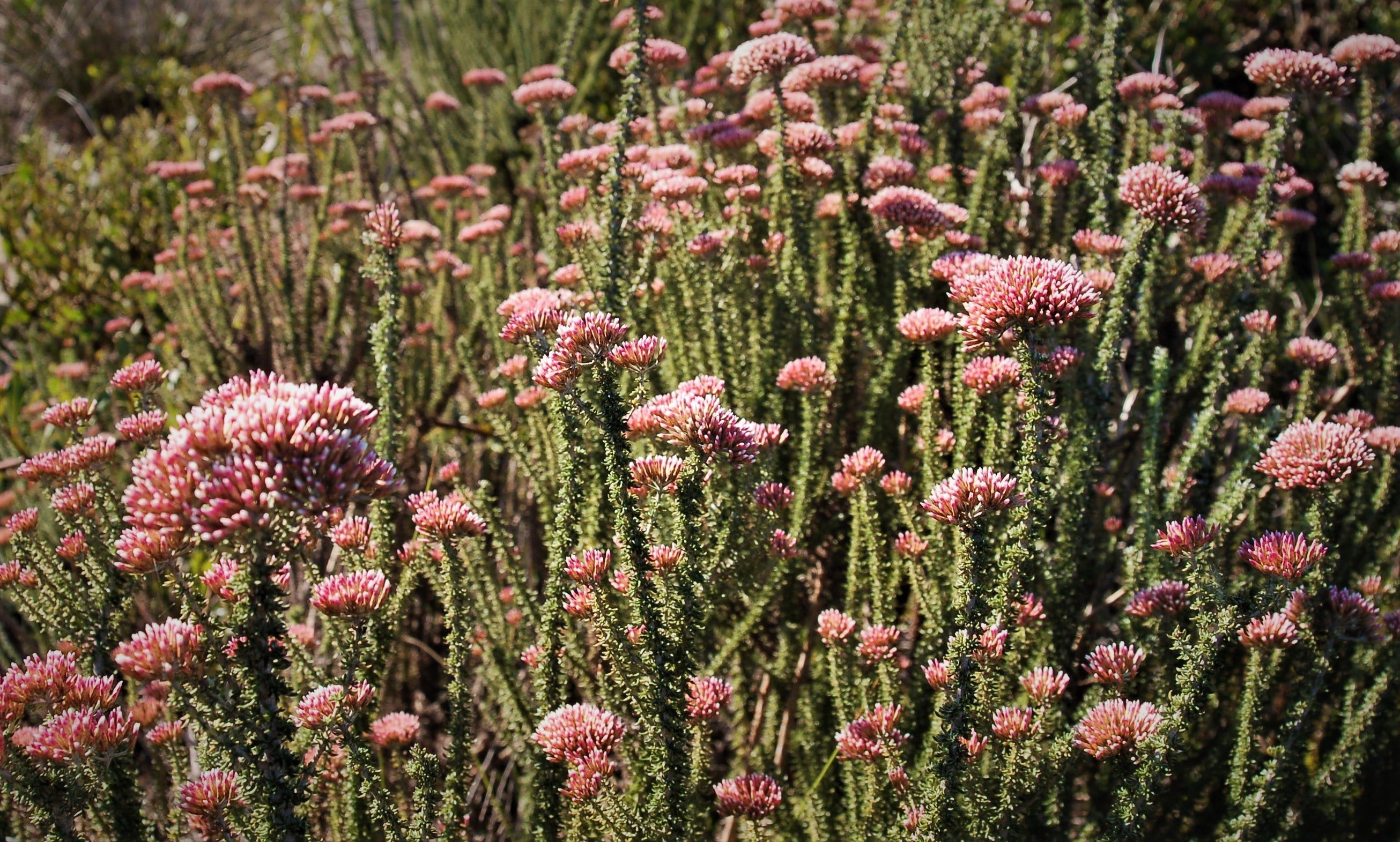 There are actually two types of natural vegetation found here – an ecotone is the word for such a floral cross-over. Cape Flats Dune Strandveld dominates the reserve, a thick mix of big shrubs and reeds, and the balance is made up by Cape Flats Sand Fynbos, a softer combination of bushes, grasses and the ubiquitous reeds – the restios. 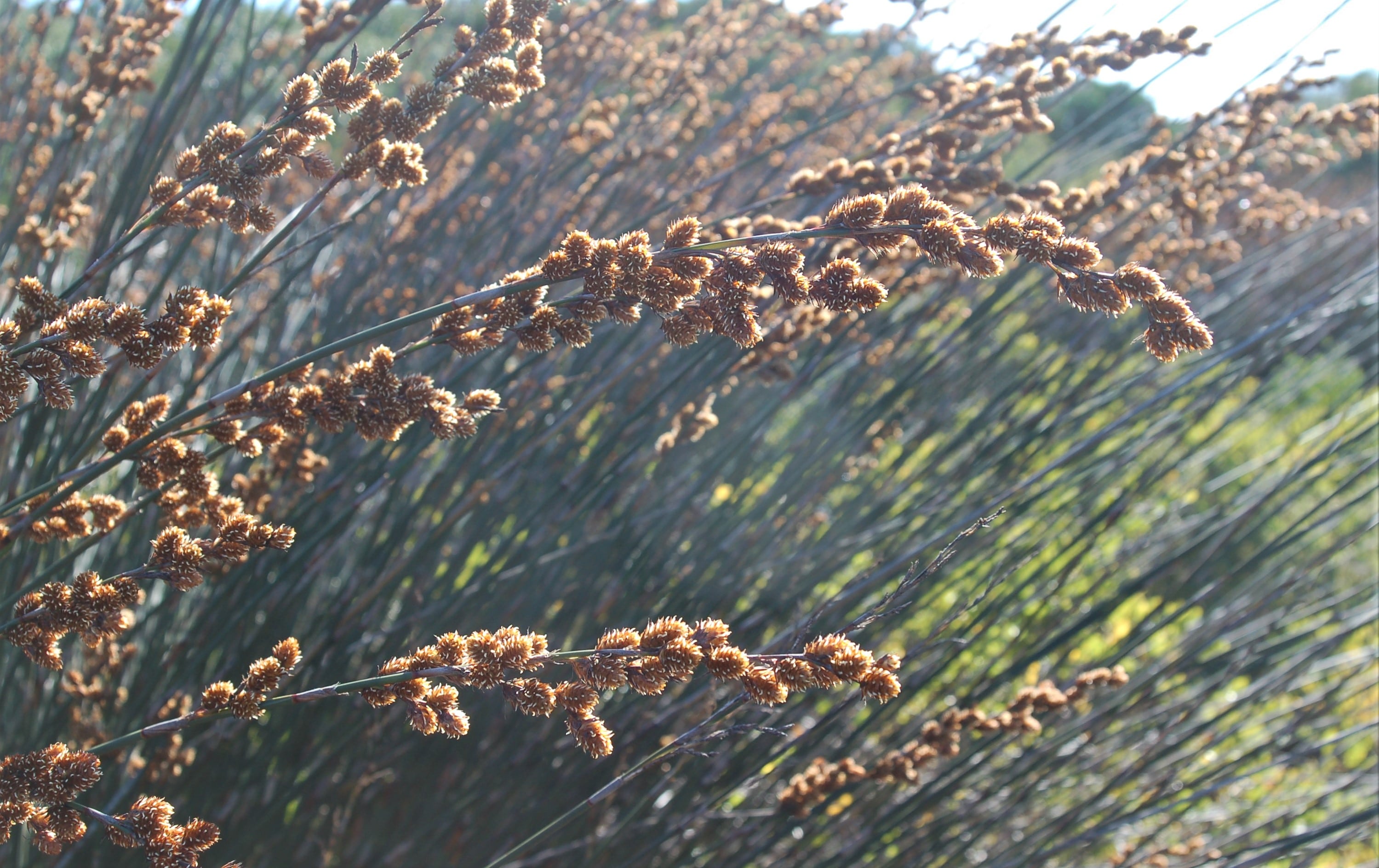 The Cape Reeds – the Restio family – reach huge sizes at the reserve: you can see how they were once used to thatch houses & make sleeping mats.

At first glance, even I’ll admit that it doesn’t look like much but you’re looking at some of nature’s most precariously balanced habitats: the Cape Flats has the highest number of threatened plant species per unit area than anywhere else on the planet. Over half of Cape Flats Dune Strandveld has disappeared and it’s even worse for Cape Flats Sand Fynbos: nearly 90% of it is gone with only 1% of the remaining scraps under formal protection. We’re down to the last few acres. 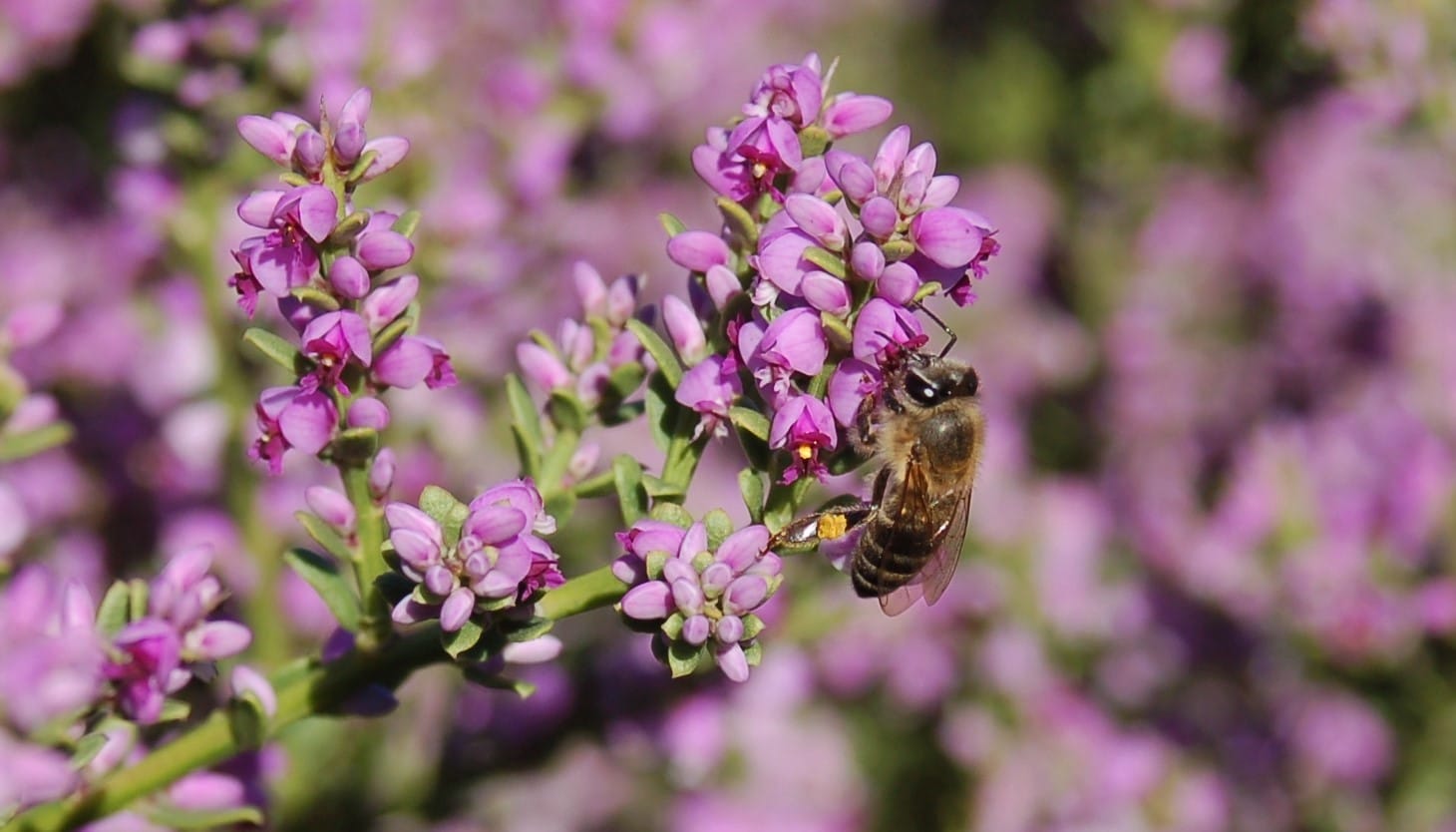 Honey bees were busy pollinating the Tortoise Berry (Nylandtia spinosa), a member of the Milkwort family whose berries are eaten by – unsurprisingly – tortoises.

Walking around the reserve today is a poignant reminder of what the Cape Flats used to be: a wild landscape of flowers and big animals. And tough going too. Today, the N2 highway carries us easily over the Cape Flats and makes the trip between Cape Town to Somerset West not much more than 40 minutes. But in the days of ox wagons, it was a two-day journey. The reserve’s single remaining wetland (the image below) was once part of a great chain of swamps full of snorting, bad-tempered hippopotamus. And the roar you hear now would not be jet aircraft coming into land at Cape Town International but those of the now extinct black-maned lions, roaming the flats for zebra and eland antelope – and maybe us – to hunt.

This is why it took two days to cross the Cape Flats before tarmac: it was a journey over thickly-vegetated sand dunes with soggy wetlands lying in between them.

There is still is wildlife in the Cape Flats Reserve – I saw the tracks of a caracal (a lynx) as well as those of small antelope and mongoose. The species list includes genets and polecats and there are plenty of birds around – Cape robin-chats and fiscal shrikes, bulbuls and mouse birds – but this is more a place to walk slowly and soak up the smaller details: insects and lichens, flowers and fungi.

Whitebacked mousebirds clamber – rodent-like- through bushes to look for berries though this one was taking advantage of the morning sun to warm up first.

And oh my there are details: who’d have thought that the Paintbrush Lily (Haemanthus sanguineus) would carefully lower its upright stalk to offer its ripe berries to passing tortoises? Or that there are delicate orchids (Holothrix) lurking on the side of the road? Great mottled mushrooms poke up out of the sand like the pointy heads of trolls, white butterflies dance in front of you and frogs chirp happily in the background – I’d be tempted to say it was idyllic. 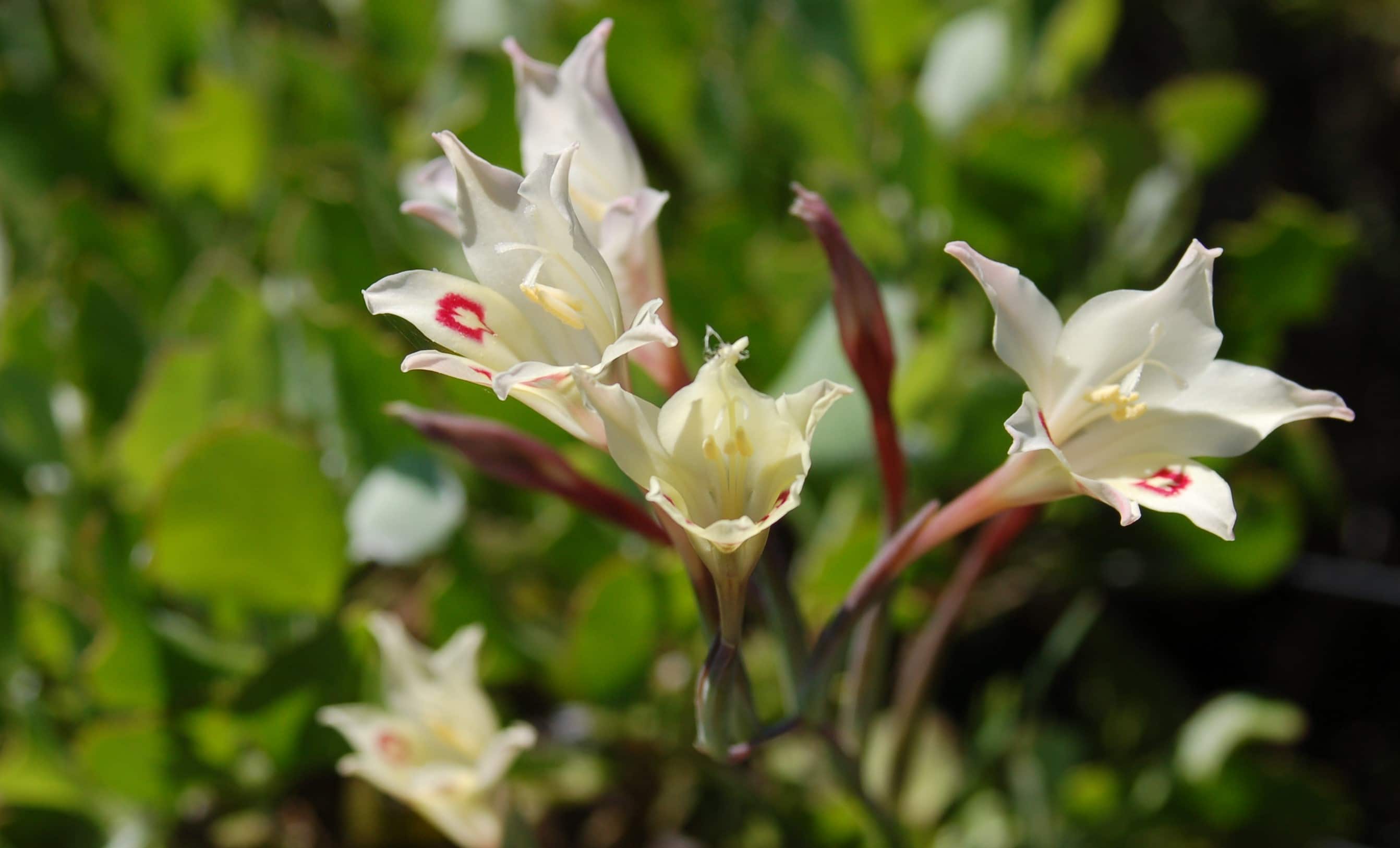 The reserve’s Marsh Painted Lady (Gladiolus angustus) is especially rare on the Cape Peninsula but would have once carpeted the Cape Flats in spring.

It’s safe too – often a consideration when you’re on the Cape Flats. The reserve is properly fenced, guarded and patrolled. You park your car next to the security post at the main entrance and everyone gives you a cheery wave when you arrive. It couldn’t be better. There’s enough to see for half a day, and – as you imagine when you are on the Cape Flats – it’s pretty easy walking. 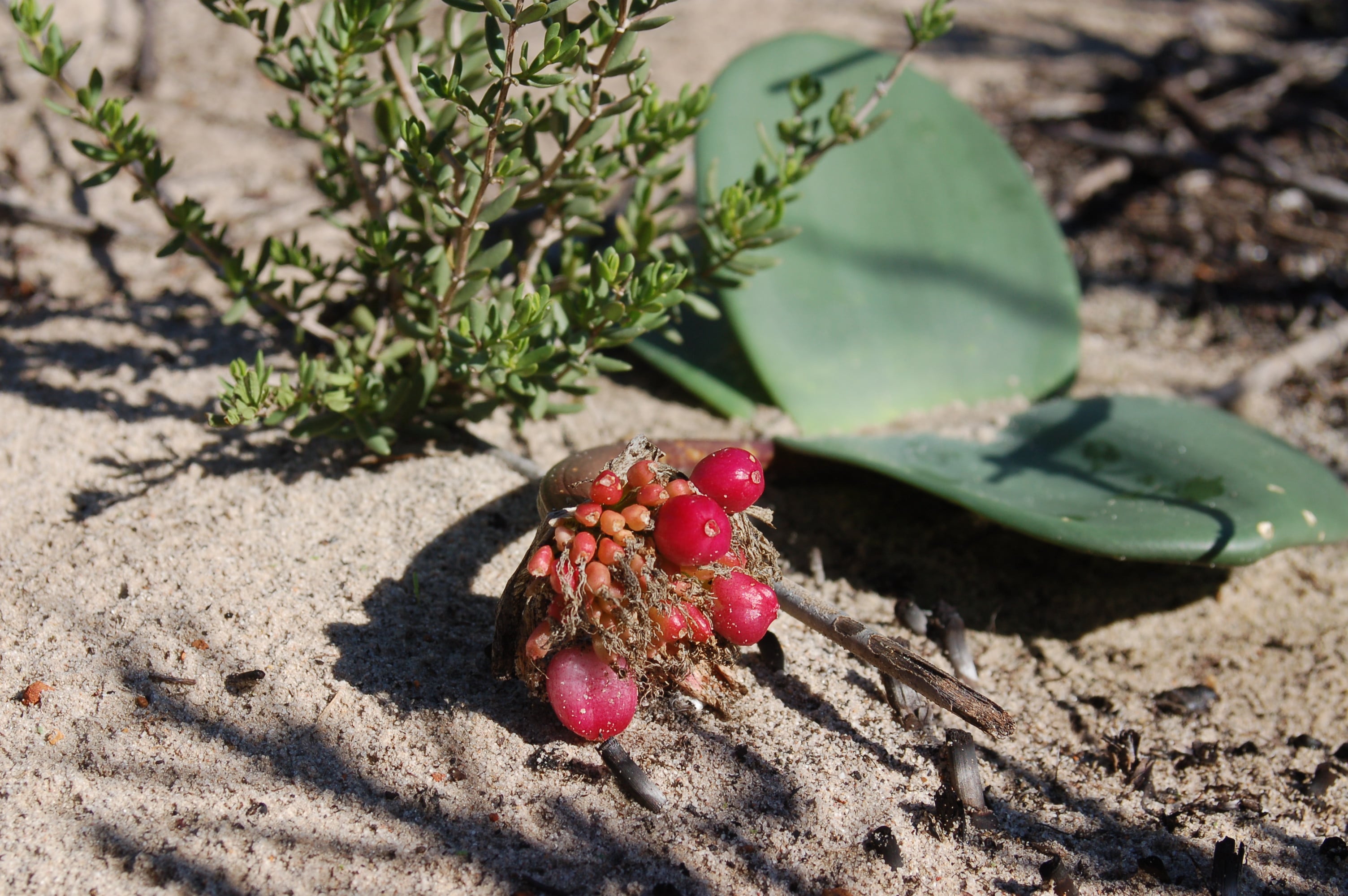 The Paintbrush Lily (Haemanthus sanguineus) ensures its seed dispersal agent – a tortoise – can reach its berries by lowering them to the ground.

You can visit the Cape Flats Reserve at any time of year – it’s free – but to see it at its best, wait until the year’s heaviest rains (June to August) have done their work. The reserve is especially good for flowers in the Cape spring – August, September and October – and there’s even an indigenous nursery to buy local fynbos plants and get a little of the Cape Flats into your neighbourhood. And that’s not always a bad thing. 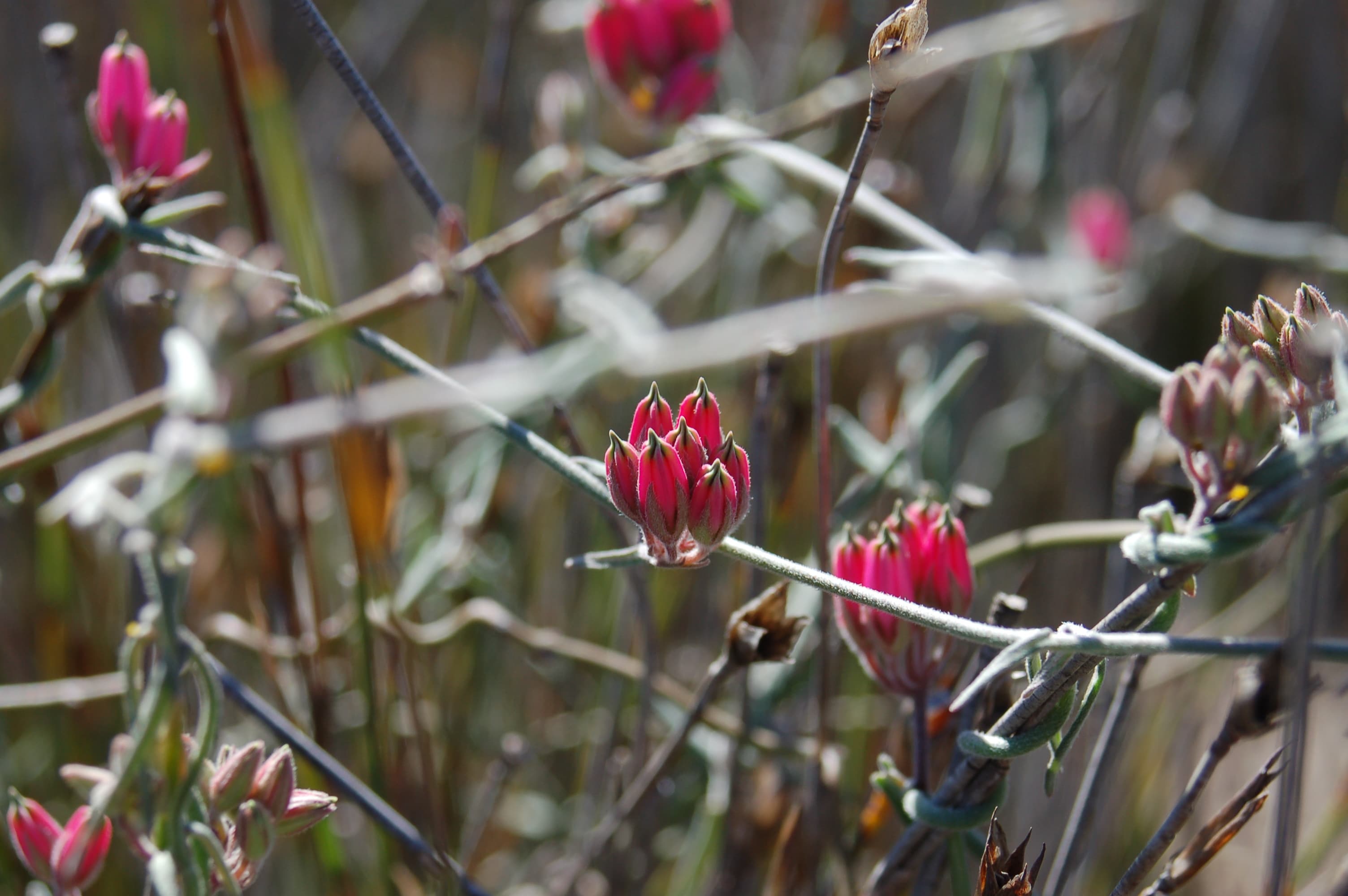 An odd member of the Euphorbia family – Microloma sagittatum – is called Bokhorinkies in Afrikaans or Little Goat Horns in reference to the shape of the flowers.

Romuela flava is in the Iris family & would have once been dug up & its bulb kept to cook later – such plants were a vital source of food for the indigenous Khoisan. 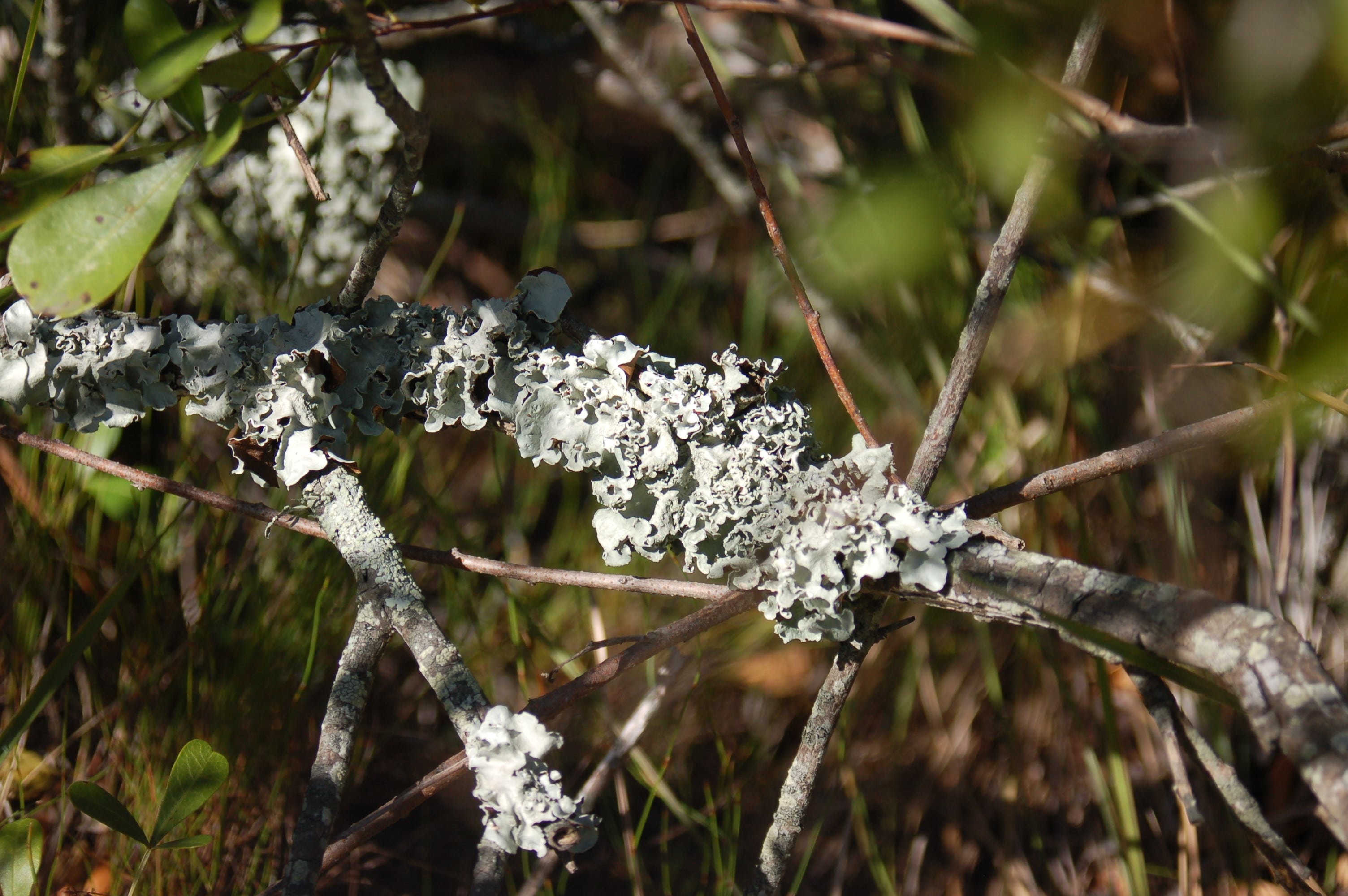 Before Western medicine came to the Cape, these flaky lichens were dried, powdered & then snorted up the nose to cure insomnia. 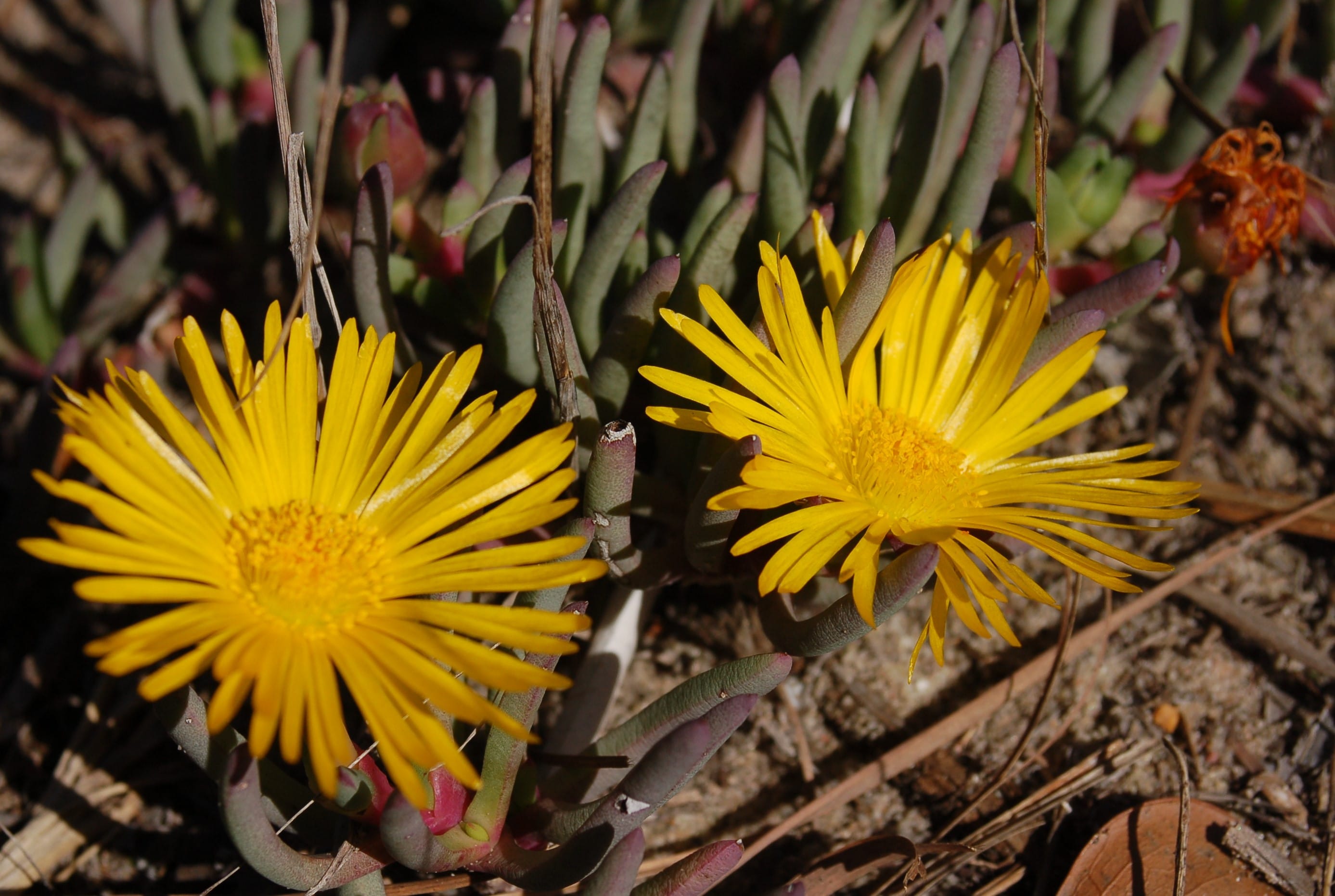