HAIL TO THE HEATHERS! ERICAS AND FYNBOS 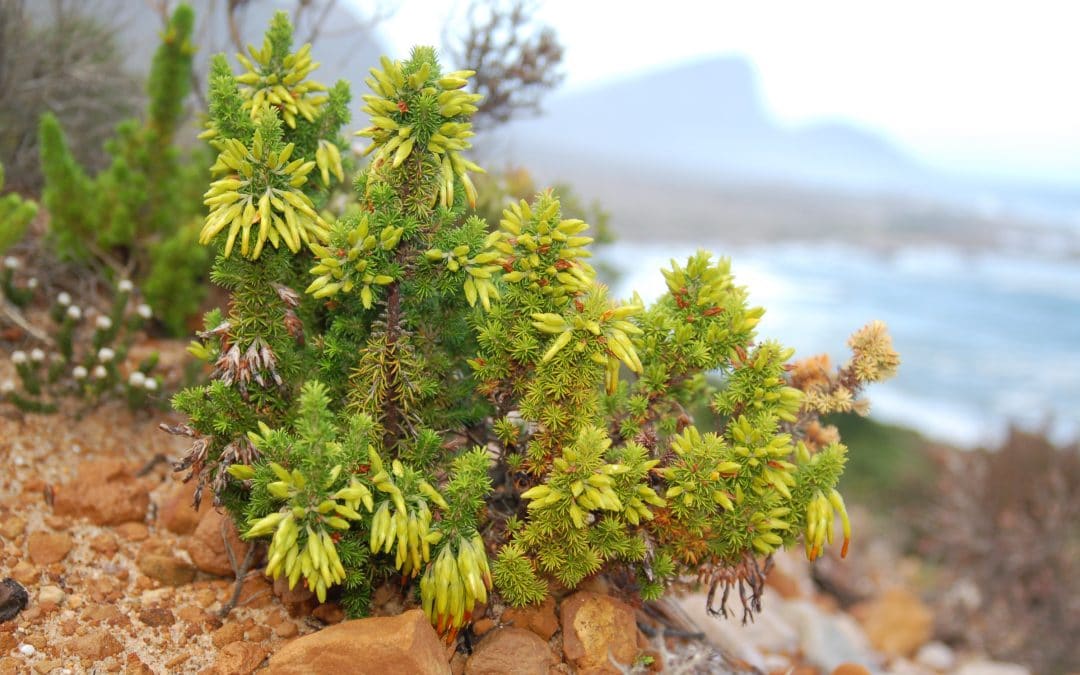 I know I’m always boasting about the diversity of fynbos vegetation but even you will go ‘wow’ at this one. The Ericas are heathers and despite their dainty, shivery-twigged appearance, it is these shrubs that best illustrate the bio-insanity of fynbos. Heathers are plants you perhaps associate with bleak Scottish moorlands and indeed there are four species of heather in Scotland with a dozen more in Europe. Madagascar – a botanical wonderland – has around 40 types of heather.

But come to the Cape and the heather numbers set off alarm bells: storm-savaged Cape Point has as many heathers as Madagascar and there are a further 50 or so more species on the way back to Cape Town. Take an hour’s drive to the mountains surrounding the otherwise unremarkable town of Caledon and now you have 235, a diversity most likely unmatched by any plant habitat on the planet. In total? The fynbos has over 650 types of heather. It makes botanists a bit dizzy.

Erica thomae is named after the legendary plant collector Thomas Stokoe & occurs in his favourite hunting ground: the Kogelberg Mountains near Cape Town.

Ericas are a genus of Ericaceae, the Heather or Heath family which also includes – somewhat oddly – the Blueberry, Cranberry and Rhododendron. The name is from the Greek word ereiko – to break – and although claims are made that Ericas have medicinal properties that break up kidney stones, the name is more likely a reference to their brittle nature: these plants shrug off gale-force winds but step on one by mistake and their twigs snap like they were made of glass.

Along with Proteas and Restios (the Cape reeds), Ericas are part of the Big Three of fynbos – they may not be present exactly where you are standing but they’ll be around somewhere. And when they are, you’ll know about it… 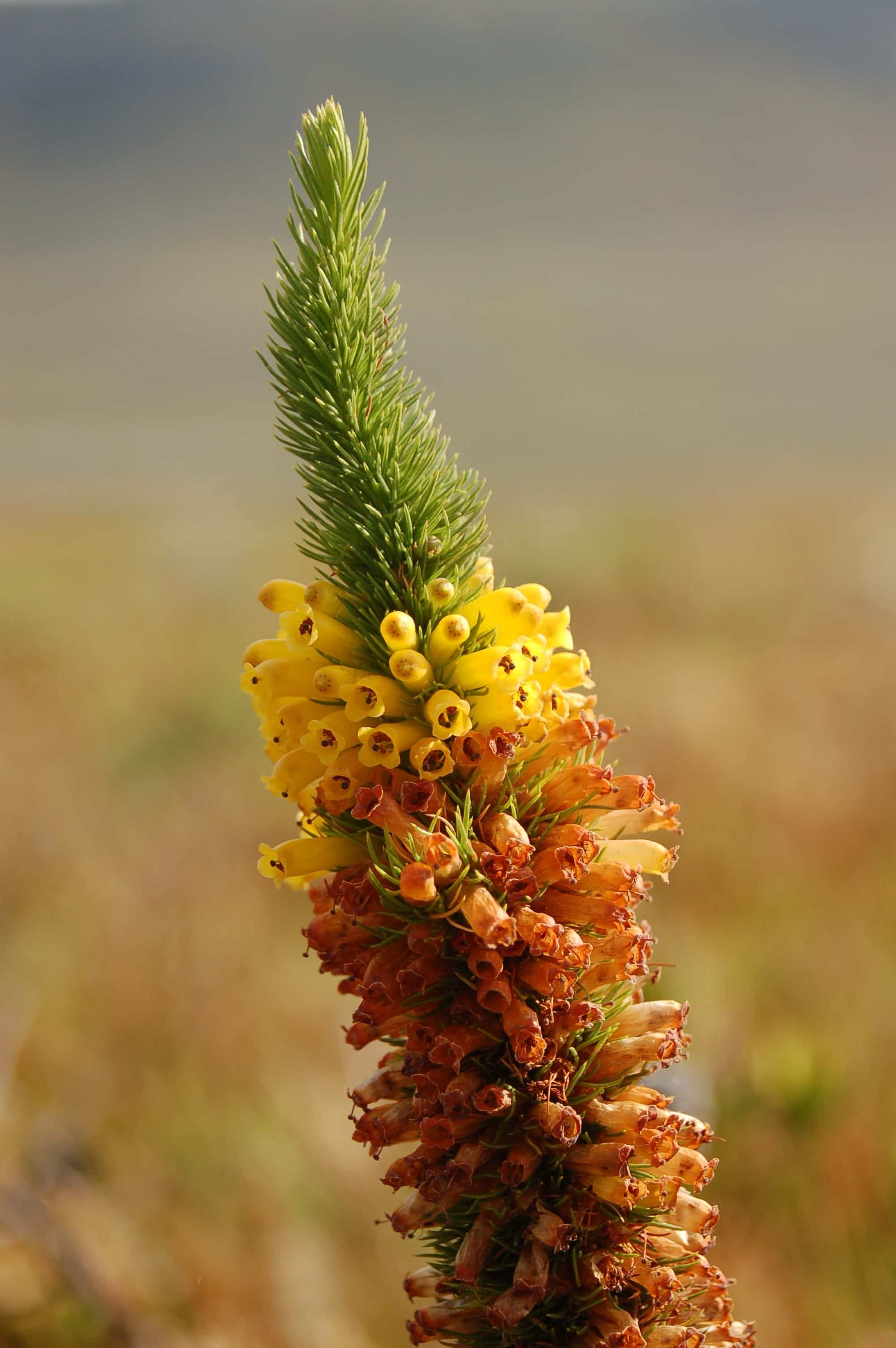 The Mealie Heath (Erica pattersonii) is a rare one, clinging on for survival in a few soggy spots close to Betty’s Bay – mealie is the local name for corn-on-the-cob.

It is the Ericas that give fynbos some of its most appealing characteristics: Erica ericoides fills the summer air with the smell of honey; Erica baccans turns whole mountainsides pink when it flowers in winter, and it’s not just pink – Ericas flower in every colour except blue and have evolved to bloom at different times of the year (to spread the competition for pollinators) so there’ll always be a heather in flower when you are in the fynbos. 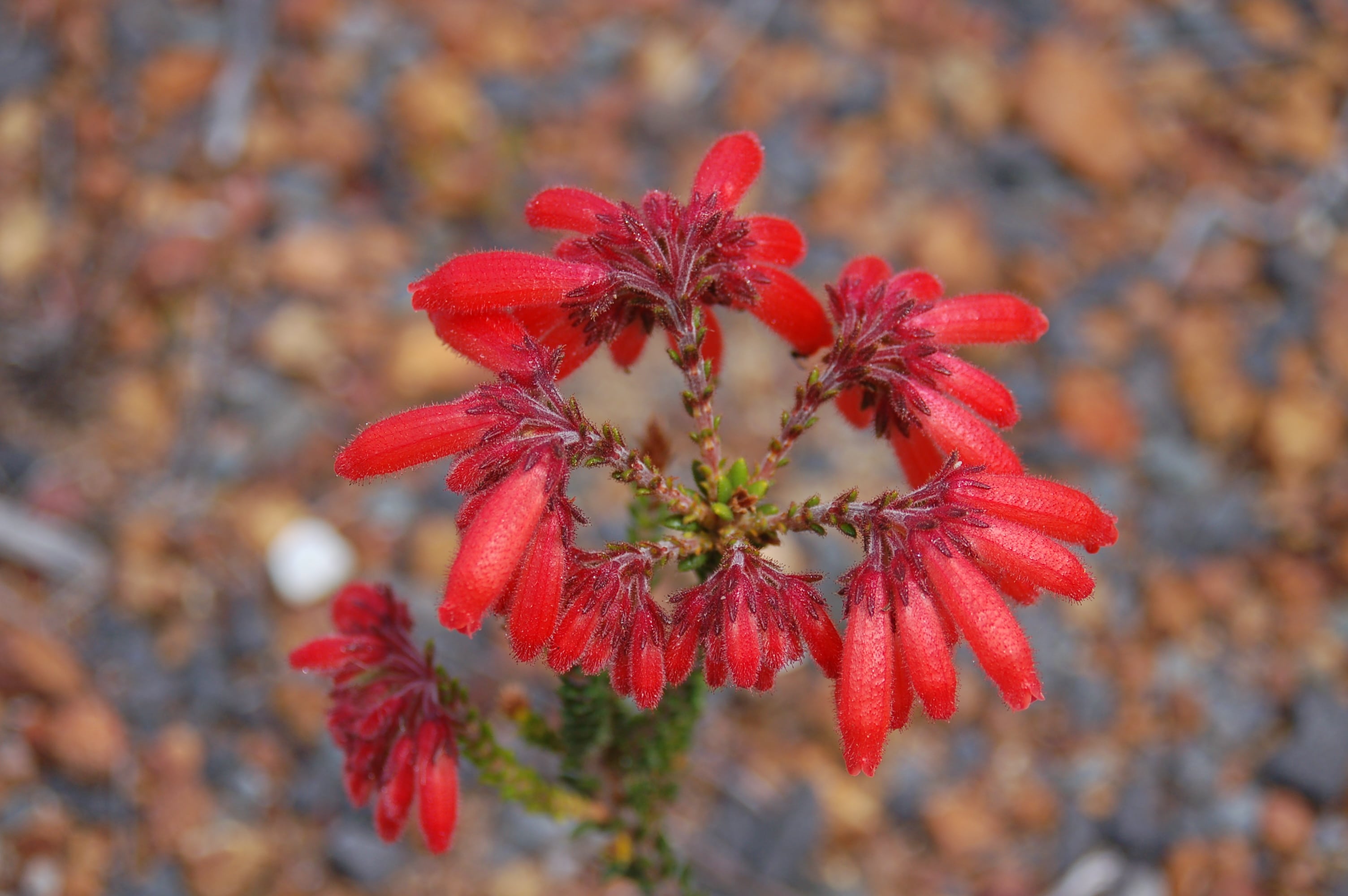 Erica cerinthoides is widely distributed & is found across South Africa, Swaziland & Lesotho – the key to its success is reflected in its common name: Fire Heath – this one regenerates after fire.

But now the problems begin. Despite the enormous diversity of species, many Ericas look pretty much identical. (It’s a mystery how so many similar species can thrive without hybridization flattening everything.) In bird watching we have LBJs – Little Brown Jobs – small, dull-coloured and irritatingly similar-looking birds; in fynbos botany, we have LPJs – Little Pink Jobs – small, pink-flowered Ericas that are as difficult to tell apart as those larks and pipits that had you squinting through your binoculars. 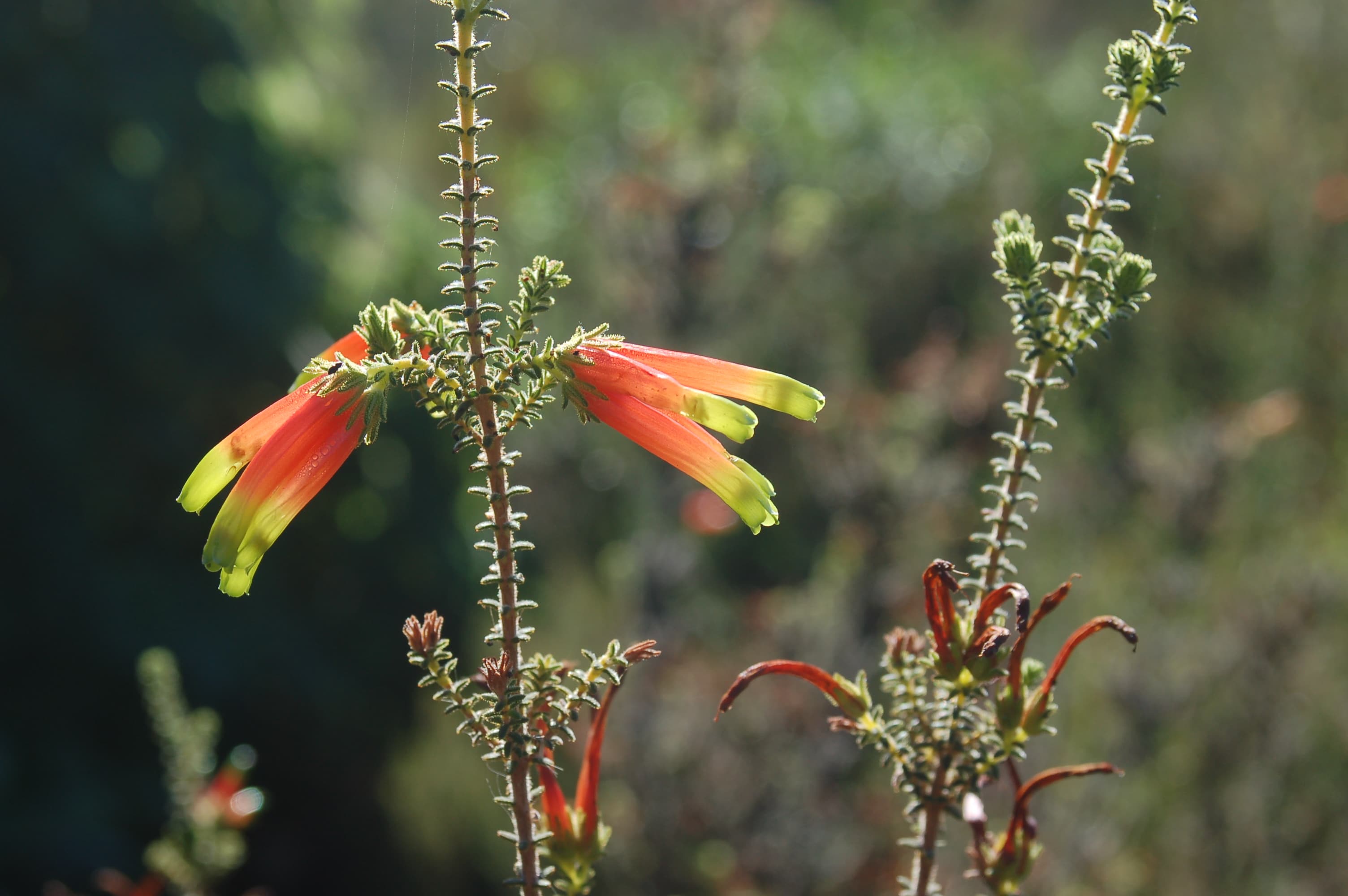 Erica discolour is a good example of the tube-flowered Ericas – touch the flower & you’ll find that it is sticky, a tactic to discourage or even trap unwanted insects.

It gets worse. Without their flowers, even I have to admit that Ericas all look a bit ‘samey’ – usually modest-sized bushes with small, needle-like leaves. And at the risk of losing you completely, many other fynbos plants from different families – daisy, pea, citrus – look just the same. The term for this small-leaved appearance is Ericaceous (‘like an Erica’) and is an adaptation to reduce water loss, the key driver in fynbos plant design. Thus, the net result is that Ericas are not only difficult to identify as individual species but are also easy to mistake for other non-Ericas.

The solution? There’s not much you can do if the plant is not in flower – although since Ericas make up 7% of all fynbos plants there’s always a chance that it is one. But if it is in bloom, then have a closer look at the shape of the flower. Ericas generally have some kind of receptacle as their flower – a tube, a trumpet, a bell, a bucket – and once you’ve established that, you are set to make a further distinction.

Ericas can also be sorted by what pollinates them. Wind-pollinated Ericas usually have masses of tiny, insignificant-looking flowers and grow in stands of floppy, weak-stemmed plants that puff out great clouds of pollen when you brush past them. 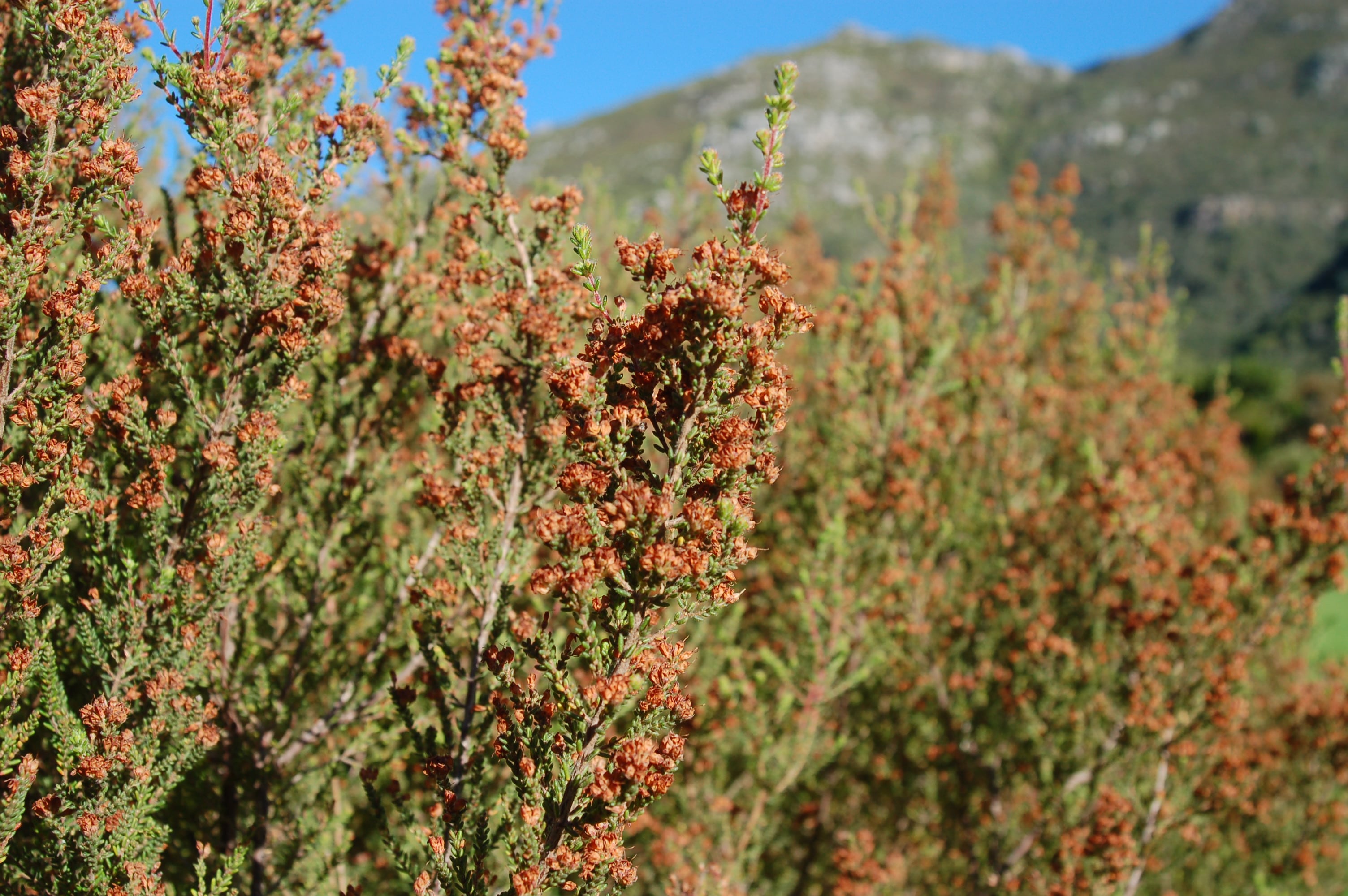 Birds love bright colours so bird-pollinated Ericas tend to have red or purple flowers that mimic the shape of a sunbird’s curved beak and are often sticky to keep insects off them. These plants will also have relatively thicker twigs for their pollinators to perch on: sunbirds may look like hummingbirds but they rarely hover to feed. 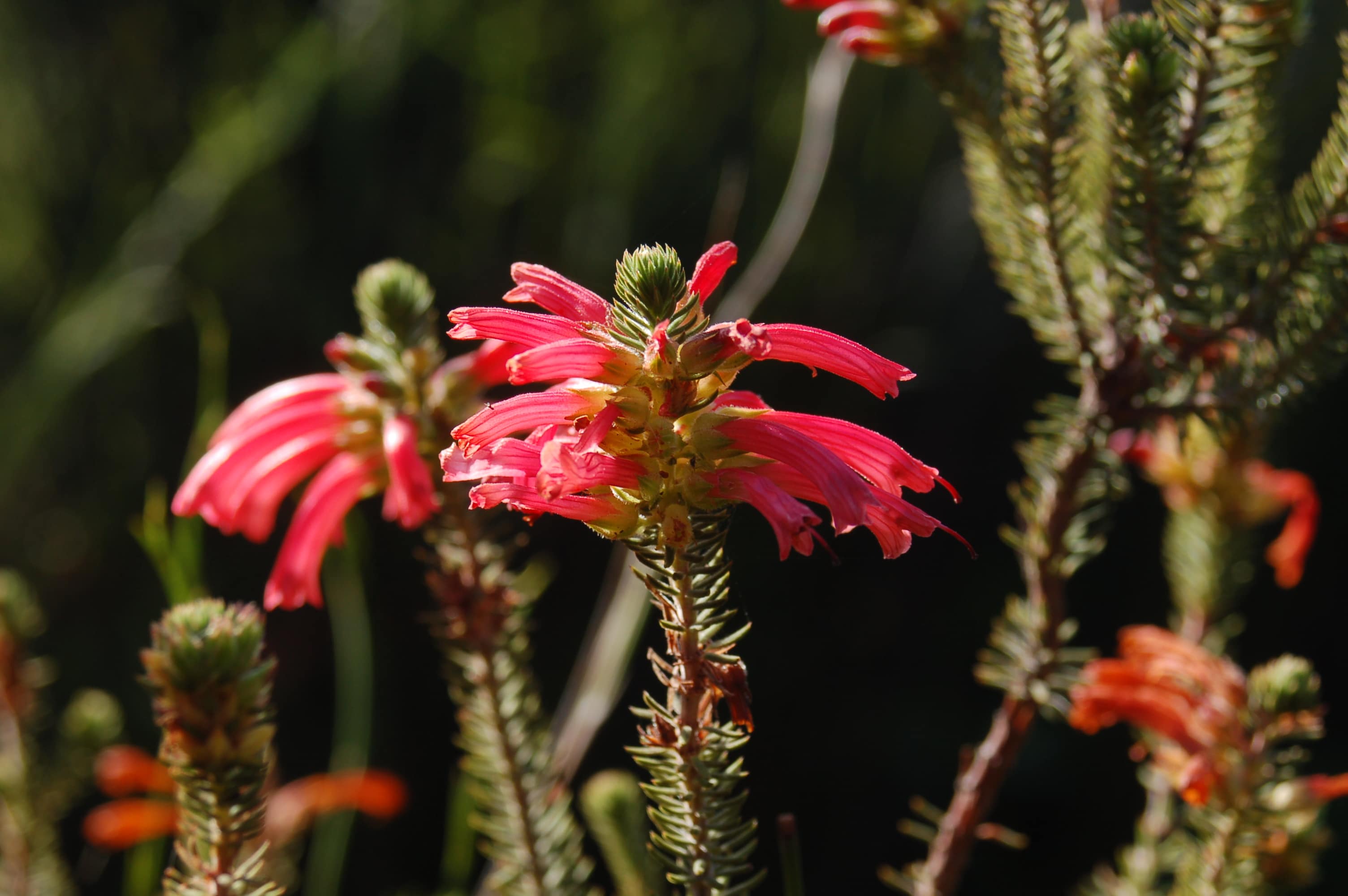 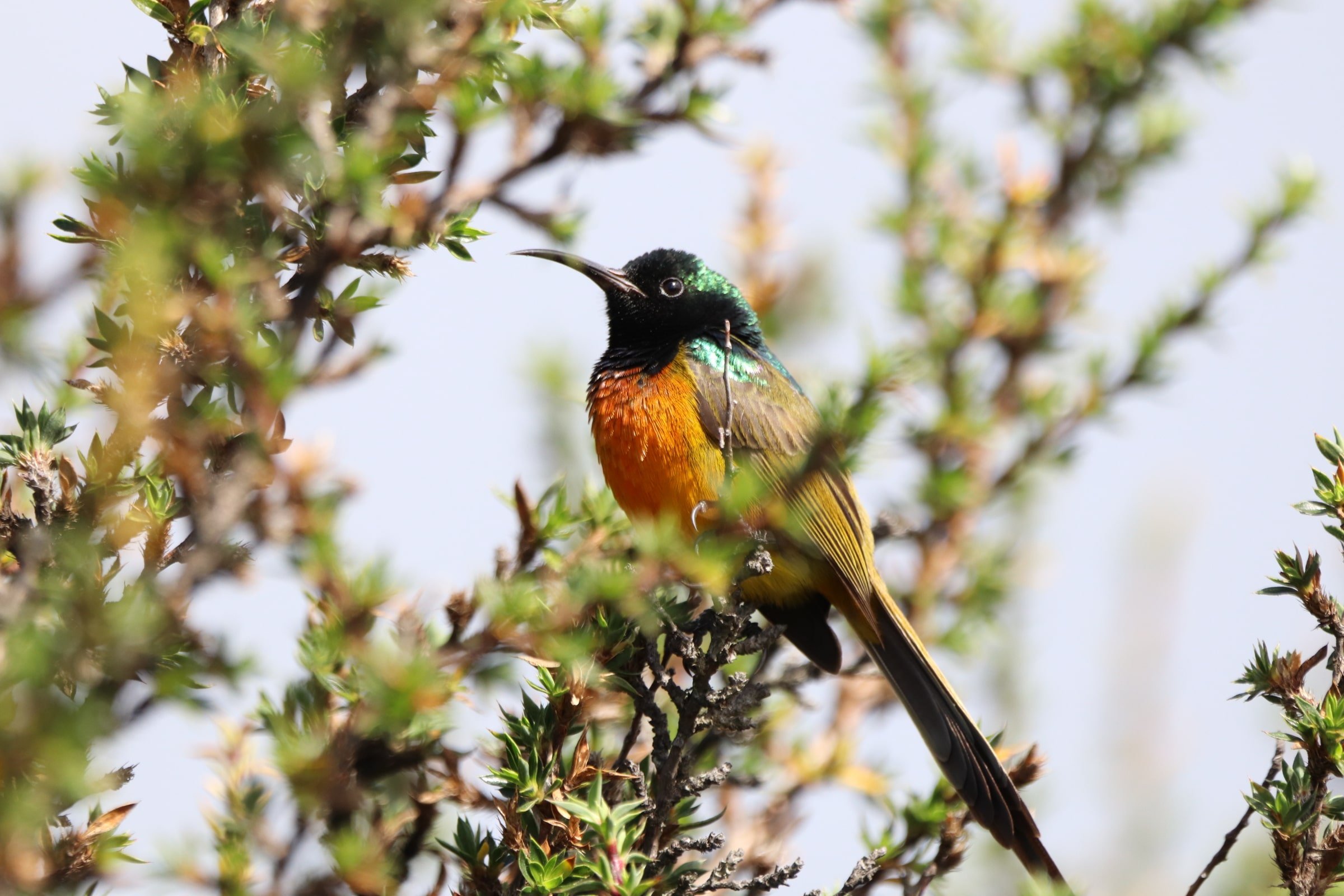 Insect-pollinated Ericas, on the other hand, are thin-twigged bushes with masses of pale-coloured flowers (white and pink especially) and often with a sweet smell – an irresistible pair of magnets for most beetles, bees and flies. 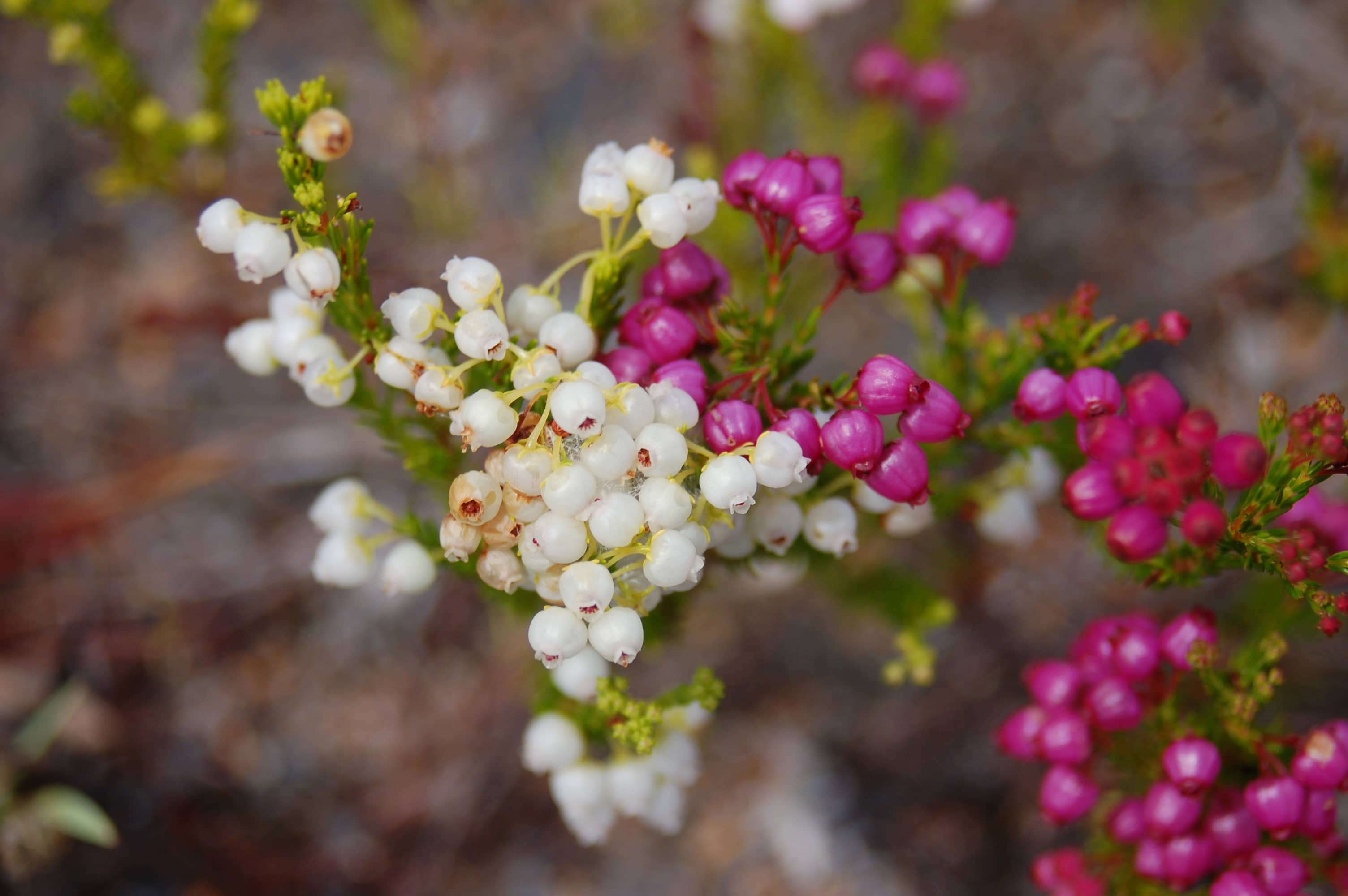 Yet despite their abundance and appeal, Ericas have had little to offer foraging humans over time. They bear no apparent medicinal properties and yield neither nuts nor fruit although they were picked mercilessly for the old Cape flower trade and larger species were chopped down for firewood. (Table Mountain was once home to a now-extinct Erica that grew five metres high (fifteen feet) and flowered so prolifically in summer that its leaves could not be seen.) 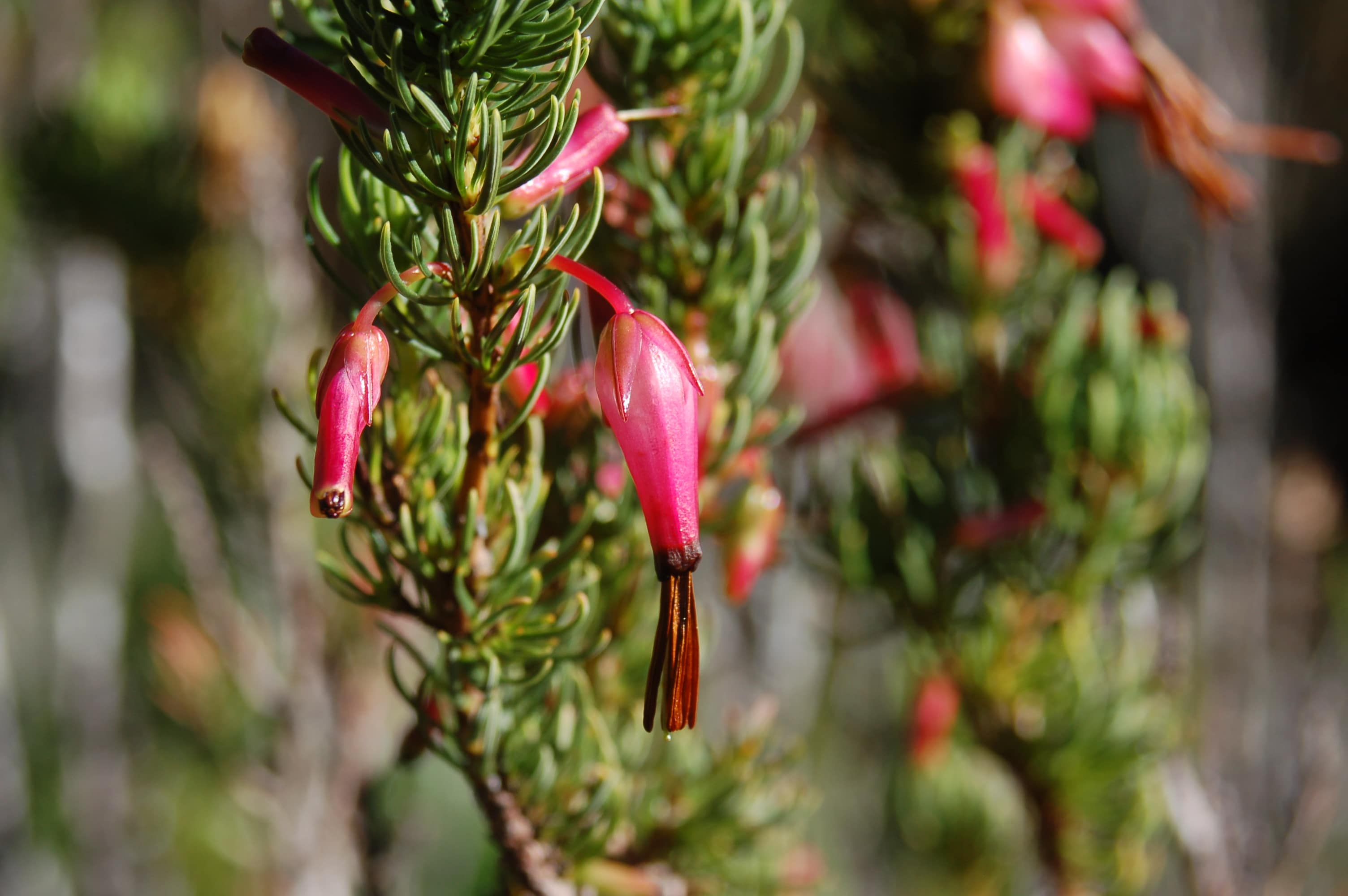 With its anthers sticking out of the corolla, it’s no wonder Erica plukenetii is better known as a Hangertjie – Little Hanger – in Afrikaans.

But maybe that’s a good thing. Inedible, hardy and slow-growing, the Ericas have mostly survived the arrival of modern humans and continue to grace the Cape mountains with their jewel-like flowers and endearing names – Salt and Pepper Heath, the Mealie Heath, and the Four-Sisters Heath – not to mention all the creatures that associate with them – sparkly sunbirds, honey bees and butterflies. Of course, some species face extinction but others have become garden plants or can withstand drought and grow back after fire; this is a family with ancient Gondwanaland origins and I suspect that Ericas will be around long after we’ve checked out. Hail to the Heathers.