Lying in the arms of Walker Bay, the otherwise unremarkable town of Hermanus achieves something close to international fame in spring.

From early August to the end of October, remarkable numbers of Southern Right Whales are in the Cape’s waters, having migrated here from the Antarctic to breed or give birth. The glittering bay is studded with waving fins and tails as the whales flirt with each other. Eager to impress, males launch themselves missile-like out of the water, landing in a froth of foam as seagulls swoop on stunned fish. And it all happens just offshore. You can sit down on a bench, sip a coffee and watch the show – it’s arguably the best land-based whale watching in the world and it’s not even a two hour drive from Cape Town.

So if you’re in Cape Town during whale season it’s worth spending a day or two at Hermanus. A boat-based tour will get you closer to the whales and you’ll probably see seals and dolphins too. There’s also the chance to see titanic-sized great white sharks (from the safety of a cage) at nearby Gansbaai. Balance all the drama with local wine tasting in the Hemel and Aarde Valley and fresh seafood suppers and it’s hard to think of a better place to be. 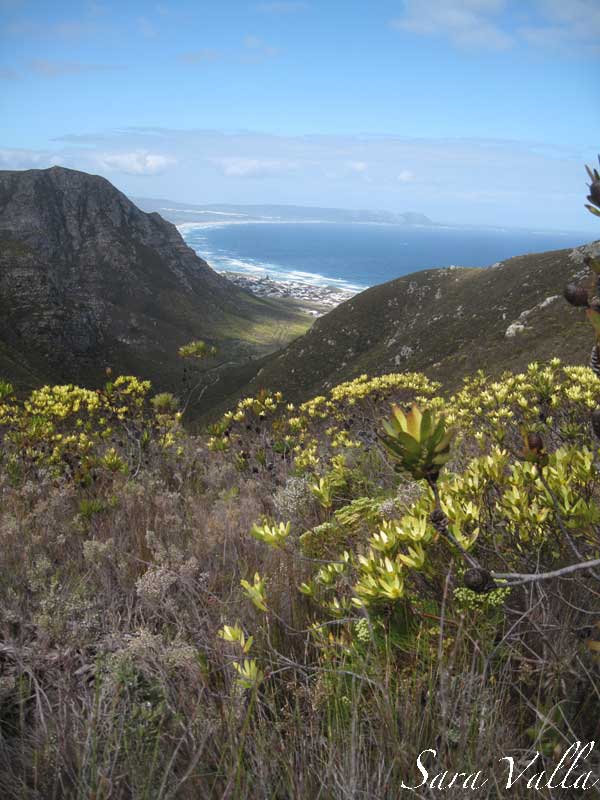 You’ll enjoy stunning scenery at every turn in Fernkloof, no matter which hike you choose.

But glance over your shoulder while you’re soaking up the whale watching and you’ll see large craggy mountains behind you, rearing up off the coastal plain like frightened horses. Part of the same range as Table Mountain, these mountains are covered in pristine fynbos and it’s in a quiet corner of Hermanus that you’ll find access to them. Whale watching and mountain hiking? At Hermanus you can do the two together!

Gladiolus gracilis can be found at Fernkloof, adding its soft lilac colour to the landscape.

I was at the Fernkloof Nature Reserve late in August with Steve and Sara, a charming Italian couple who had just been hiking in northern Italy. They were struck by the similarities between the Cape and their Mediterranean home – the sunny, pine-scented air and sapphire sea in particular – but we were watching whales from our mountain-top lookout, surrounded by sheets of dazzling flowers that had us all completely absorbed. Mimetes proteas were preparing to flower, their green leaves blushing red in anticipation.

Showy orchids, proteas and heathers were competing for our attention along with smaller jewels – a lilac-coloured gladiolus or the sparkling, glue-covered leaves of a sundew, patiently waiting for its animal prey. Fernkloof Reserve may only cover a modest 1800 hectares but it is home to around 1500 species of flowering plants, three of which are found here and nowhere else on the planet. Twenty more only occur here and a few scattered patches nearby.

Why the extravagance? And how is it possible in this mountain environment of desperately poor soil, high winds and baking heat for most of the year? There are many reasons behind this conundrum and we could witness some of them as we hiked. 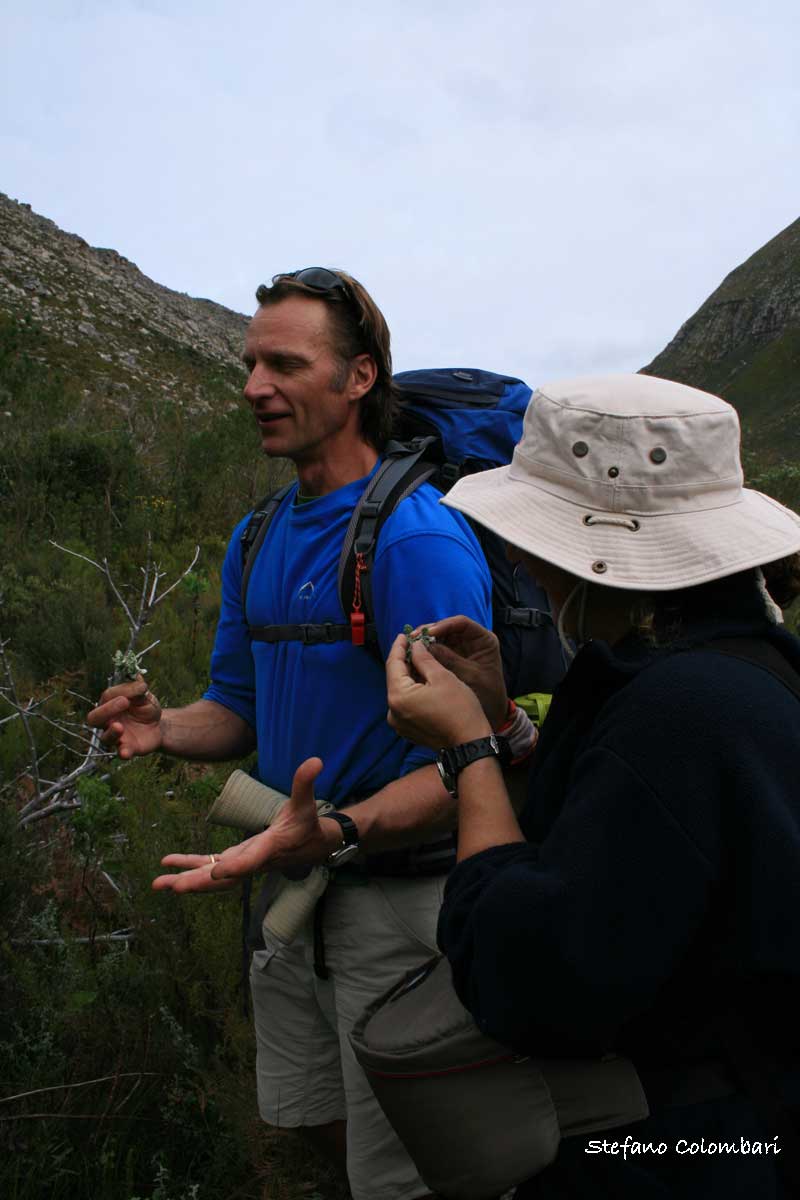 Checking out imphepho, the Xhosa name for Helichrysum daisies & often burned as incense.

Fernkloof’s trails meander through different eco-zones as the terrain dips and rises, taking you up to over 800 metres for a bird’s eye view. Thick forest clings to shaded ravines while great stands of reeds rustle in wetlands. We noticed different heathers appearing as the altitude changed, and how plants could dominate one side of a hill but be absent from the opposite side. 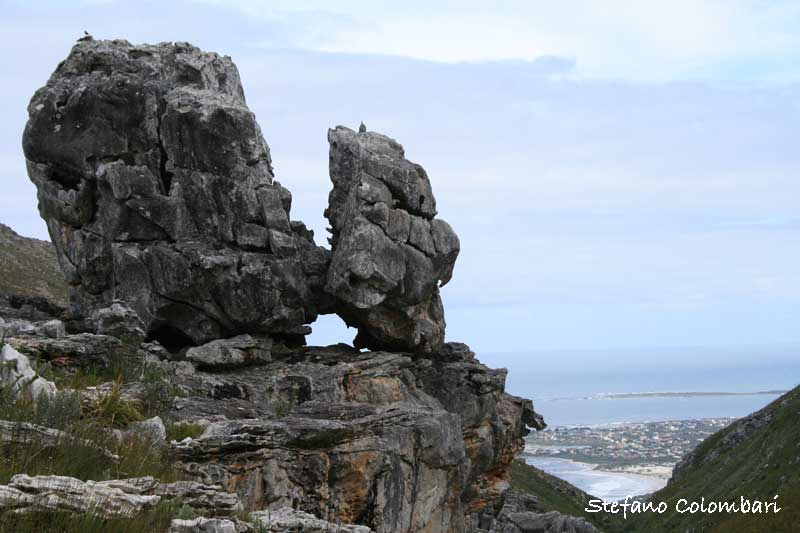 Millions of years of weathering have sculpted extraordinary rock formations at Fernkloof.

But you don’t have to hit the high ground to appreciate the unique beauty of Fernkloof. There are 60 kilometres of trails ranging from short family rambles and half-day hikes to trails that last the better part of a day. Combine it with a stroll along Hermanus’ coastal path (ideal for whale watching) and you’ve got the perfect day – whale watching and mountain hiking: who said you can’t have it all?