Hike the Cederberg with The Fynbos Guy 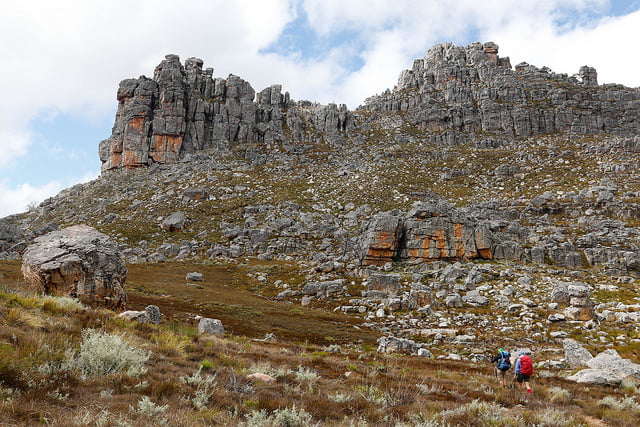 High peaks, sun-baked ravines and wind-swept plateaus – the Cederberg mountains deliver some of the most dramatic hiking in South Africa. But its trump card is its accessibility. This kind of big-mountain hiking isn’t something you fly across remote glaciers for; the Cederberg sits an easy three-hour drive from Cape Town. Leave the city before lunch and you’ll be sitting down for supper surrounded by silent mountains. 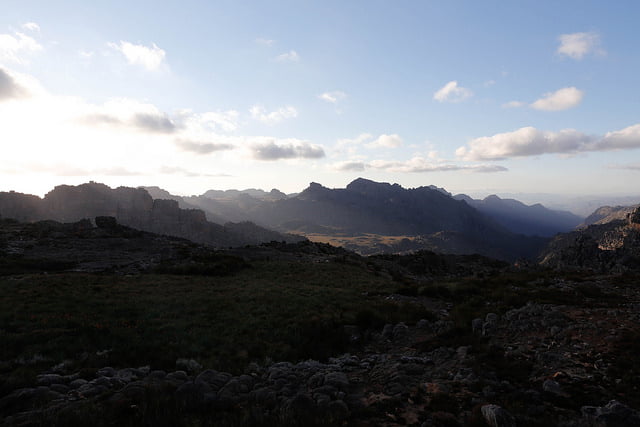 Hike the Cederberg & you’ll have these views with your evening meal. 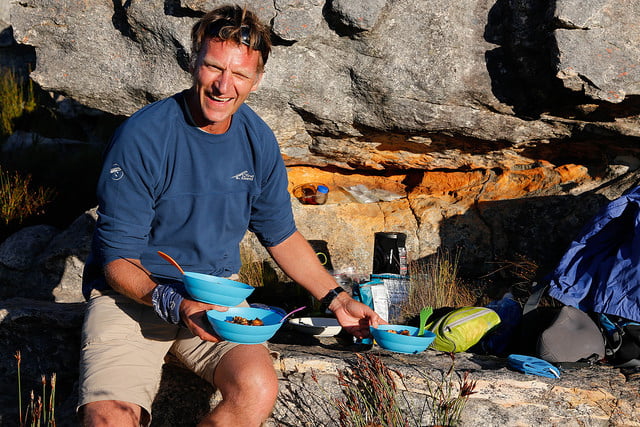 I was leading a group of three hikers into the Cederberg for three nights but first there was high ground to reach. Leaving the vehicle at Algeria, the oddly-named but ever-friendly Cape Nature camp site, the group stepped out of the shade and into the sun. It was an instant reminder of the golden rule of Cederberg hiking: Prepare for Everything. 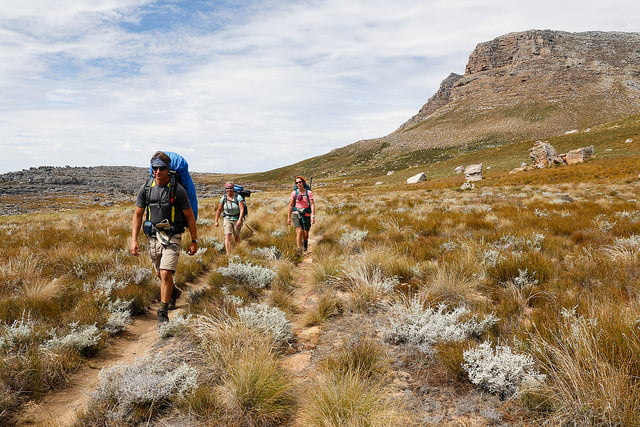 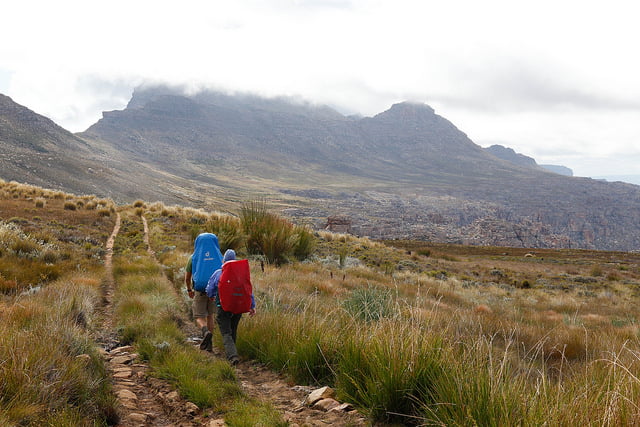 But prepare for all seasons at all times of year.

It was so hot you could see the warmth steaming off the rocks. The temperature was 35°C/95°F and the heat-addled cicadas added a shrill edge. We were ready for it but there were also feather-down clothing and thick sleeping bags in our packs. We were also carrying rain jackets and waterproof pants. It was December – early summer – but in the Cederberg you need the Full Monty. 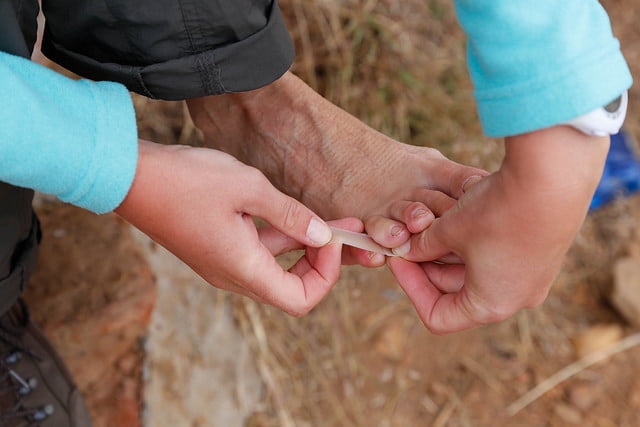 Blister prevention! A layer of micropore does the trick. 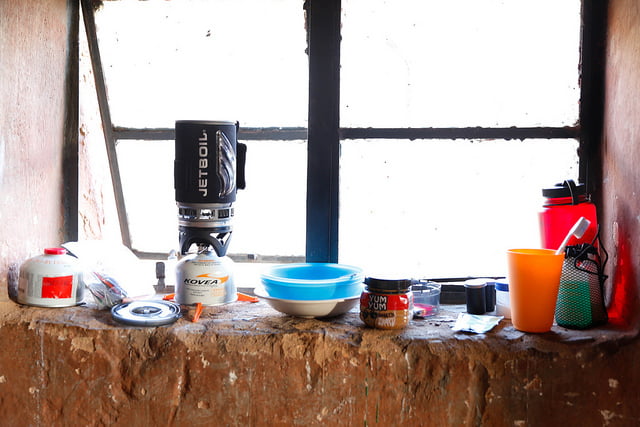 Hikers have to be completely self-sufficient in the Cederberg.

Our first night was spent under oak trees next to Middelburg hut. There are several of these rough-and-ready mountain huts scattered throughout the Cederberg. Lined with dry straw they make an ideal refuge in bad weather and their location near water means a hike is best planned around them. We used a combination of lightweight tents, huts and plain-old sleeping under the stars – the weather usually has the last say. 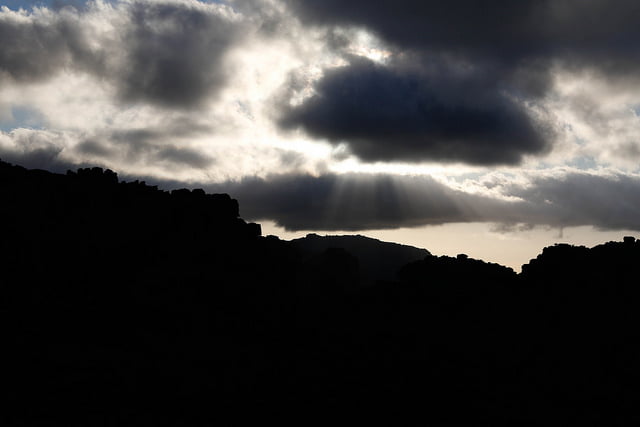 The next morning we came across a troop of baboons. But these were not the Artful Dodgers of Cape Point, mugging visitors of their pizza slices at bared-tooth point. These wild baboons were surprised to see us. The young ones scrambled away as mothers scooped up their infants. The troop leader brought up the rear, turning to bark at us in bristled-hair defiance.

Don’t expect to see many animals in the Cederberg however. Made of ancient sandstone, the mountains yield a thin soil with few nutrients – food chains are short. But they are far from barren. Covered in indigenous fynbos vegetation, the Cederberg is home to hundreds of different species of plants ranging from tree-sized proteas to thumb-sized orchids. Besides, there is certainly wildlife around: predatory beetles scurry pass your feet as you hike, falling prey themselves to hovering rock kestrels. You can see mongoose footprints pattering along the trail and claw marks on a tree where a leopard has sharpened its claws. 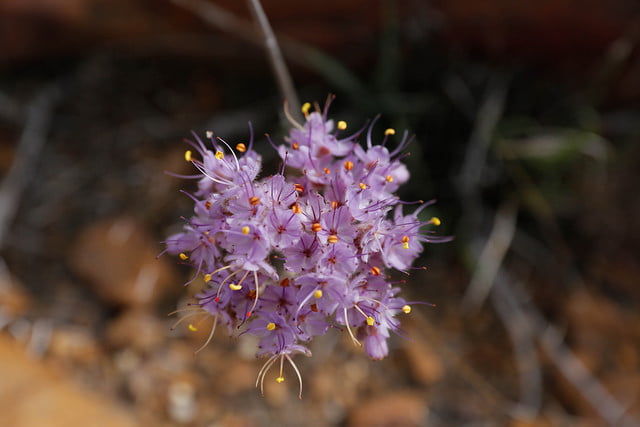 The flower of a Rooi Wortel (Red Root) catches the eye. 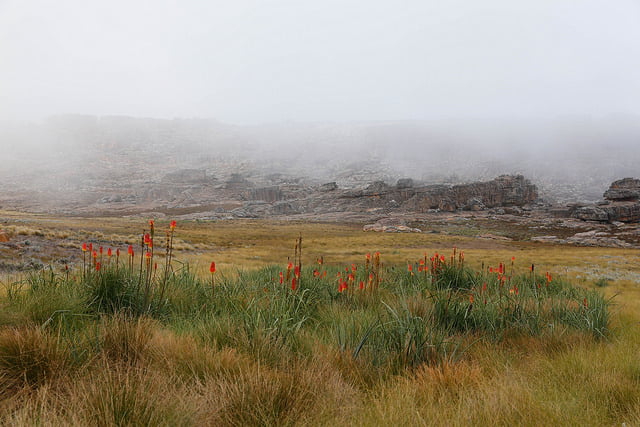 Sugarbirds & sunbirds were visiting these Red Hot Pokers, a type of aloe.

Our second night was at Sleeppad hut. Set at over 1500 metres (5000 feet) above sea level, it has the kind of views you need to sit down for. And we were ready to sit down. It had been a long day with plenty of ups and downs, which sums up hiking in the Cederberg. A series of ridges running north-south the Cederberg range is a map-makers dream, home to vertical-sided valleys, angled mountains and twisting rivers. But it means there’s big walking to do. You’ll need to be in pretty good shape and used to carrying a heavy pack. 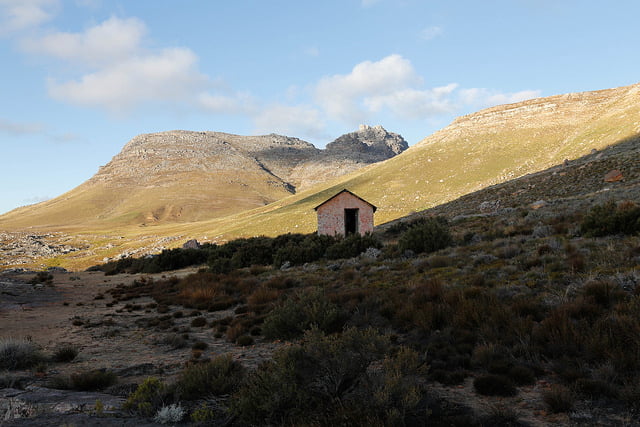 The welcome sight of a mountain hut at the end of the day.

Then it rained. Typical. Just like the Cederberg. But it was welcome relief: we were grinding four miles uphill to Uilsgat (‘Owl’s Hole’) on the third day and the last thing we needed was dazzling sunshine. And it wasn’t long before the clouds broke and the Cederberg’s usual blue sky returned. Good thing too – we were wild camping for our last night.

And that’s the Cederberg’s ace up the sleeve: you can camp where you want. Like the view? Pitch your tent. I had found such a place on a previous trip and the group agreed it was the best spot – unmarked and unspoilt, and complete with kitchen work surface and dry storage areas. 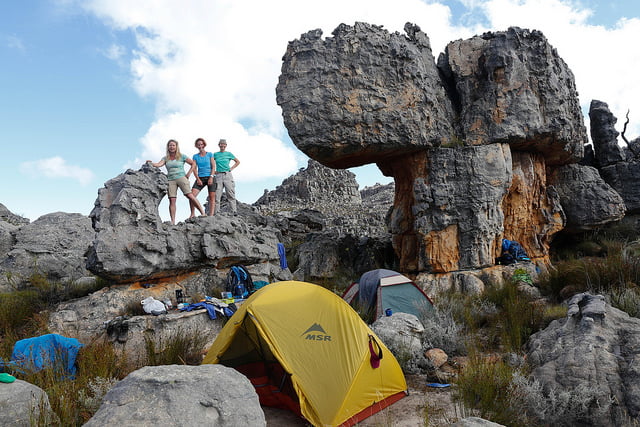 Wilderness camping – the best thing about the Cederberg.

The last night was cold and a strong wind picked up to rattle the tents but not before the cosmos put on a show. This was the clearest night of the hike and shooting stars sped like tracer bullets across the night sky – the annual Geminid meteor shower had started and the Cederberg’s moonless sky was the perfect canvas. 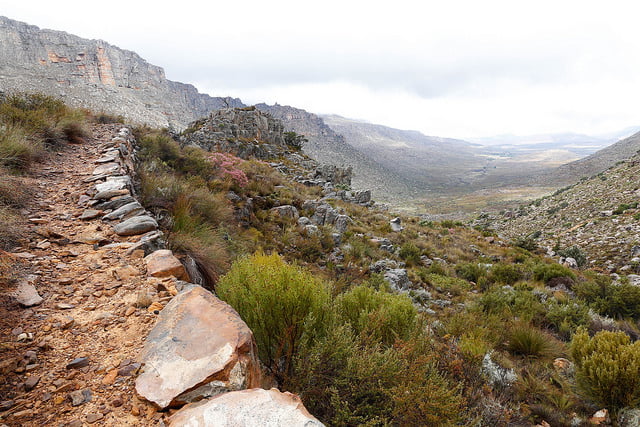 The road less travelled: this used to be a jeep track.

The way back was down a yawning ravine and along a river ringing with cheerful bird song. We drank our last untainted mountain water and soon caught sight of Algeria where the car was waiting. Suddenly a loud sneeze made us all turn to say gesundheit to each other. But the sound was the alarm call of a grey rhebok, an antelope. We turned to see a family of them darting away from us, their upturned white tails a farewell wave from the Cederberg. Three hours later we were unpacking in Cape Town. 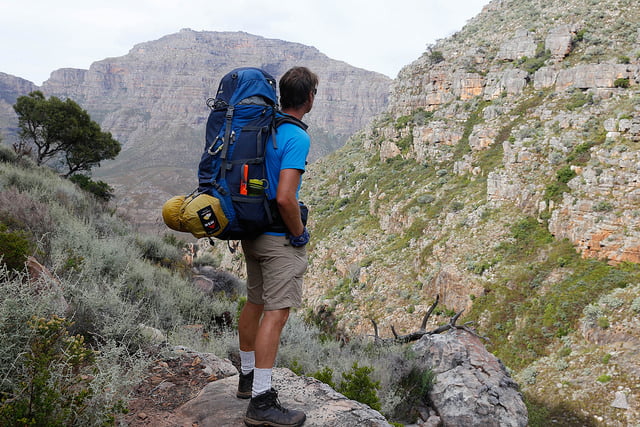 Beginning the decent on the last morning.

All images by kind permission of Priscilla P Macy of Global Sojourns.