LION’S HEAD: AFTER THE FIRE 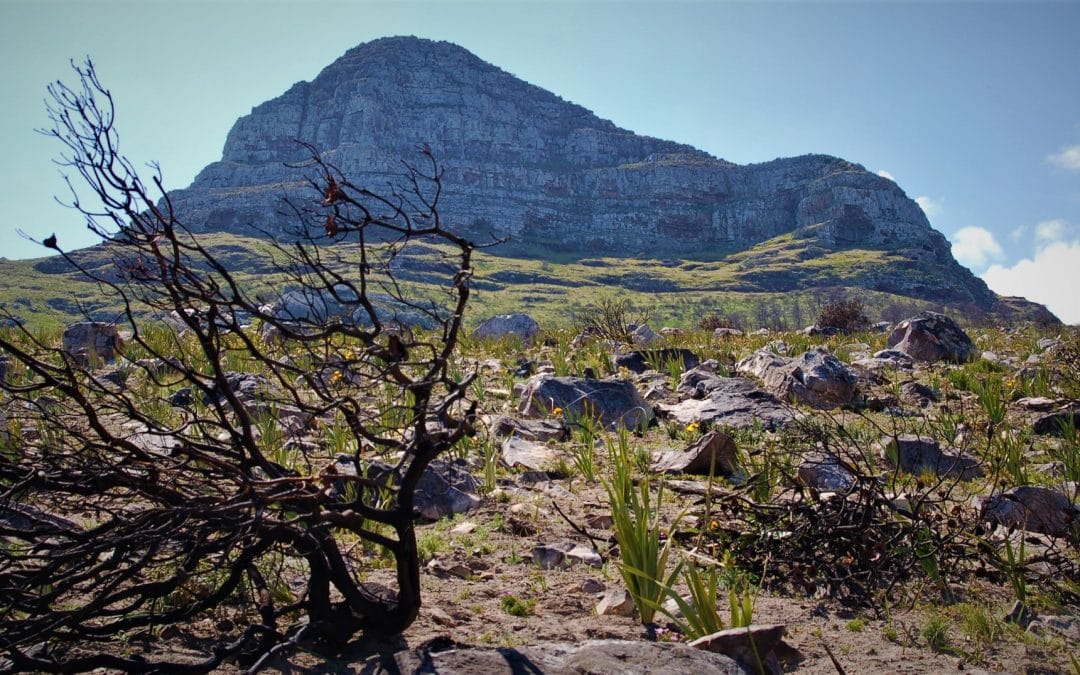 Having collected 50 000 floral specimens over a lifetime of discovery, it’s fair to say that English naturalist William Burchell (1781 – 1863) knew a thing or two about plants. But even he was staggered by the flowers on Lion’s Head during a visit to Cape Town, comparing Lion’s Head to a neglected botanic garden, left to flourish naturally with ‘variety everywhere’.

It hasn’t been easy for Lion’s Head since then. Its lower slopes have suffered the indignity of alien tree plantations while its mid-slopes were scarred by miners looking for gold. And its 669-metre peak (2 195 feet) sees the boots of 200 000 people every year, making it – incidentally – the most-climbed mountain in the world.

The Peacock Flower (Spiloxene capensis) lights up the damper parts of Lion’s Head – it’s in the Star Lily family – Hypoxidaceae.

But despite decades of exploitation, Lion’s Head is in good health. The suffocating stands of pine and gum trees have been cut back over the years, old mine shafts filled in, and hikers are still rewarded every year with stunning displays of spring flowers. Back in 1810, Burchell was amazed to count over a hundred different plant species in a short walk and I reckon he could still do it today. The secret lies at your feet.

Lion’s Head brings together three different rock types – shale, granite and sandstone – and each one supports a distinct suite of plants. Shale is the oldest of them; its crumbly clay soil makes up the rounded lower slopes of Lion’s Head, supporting a vestigial scrap of Renosterveld which just a few hundred years ago was browsed by black rhino and patrolled by lions. Once-molten Cape Granite makes up the broad mid-layer of Lion’s Head, worn smooth and covered in exceptionally rare Granite Fynbos. The craggy cliffs at the top are Sandstone, the youngest of the rocks and home to Mountain Fynbos – a similar set of plants to those on Table Mountain. 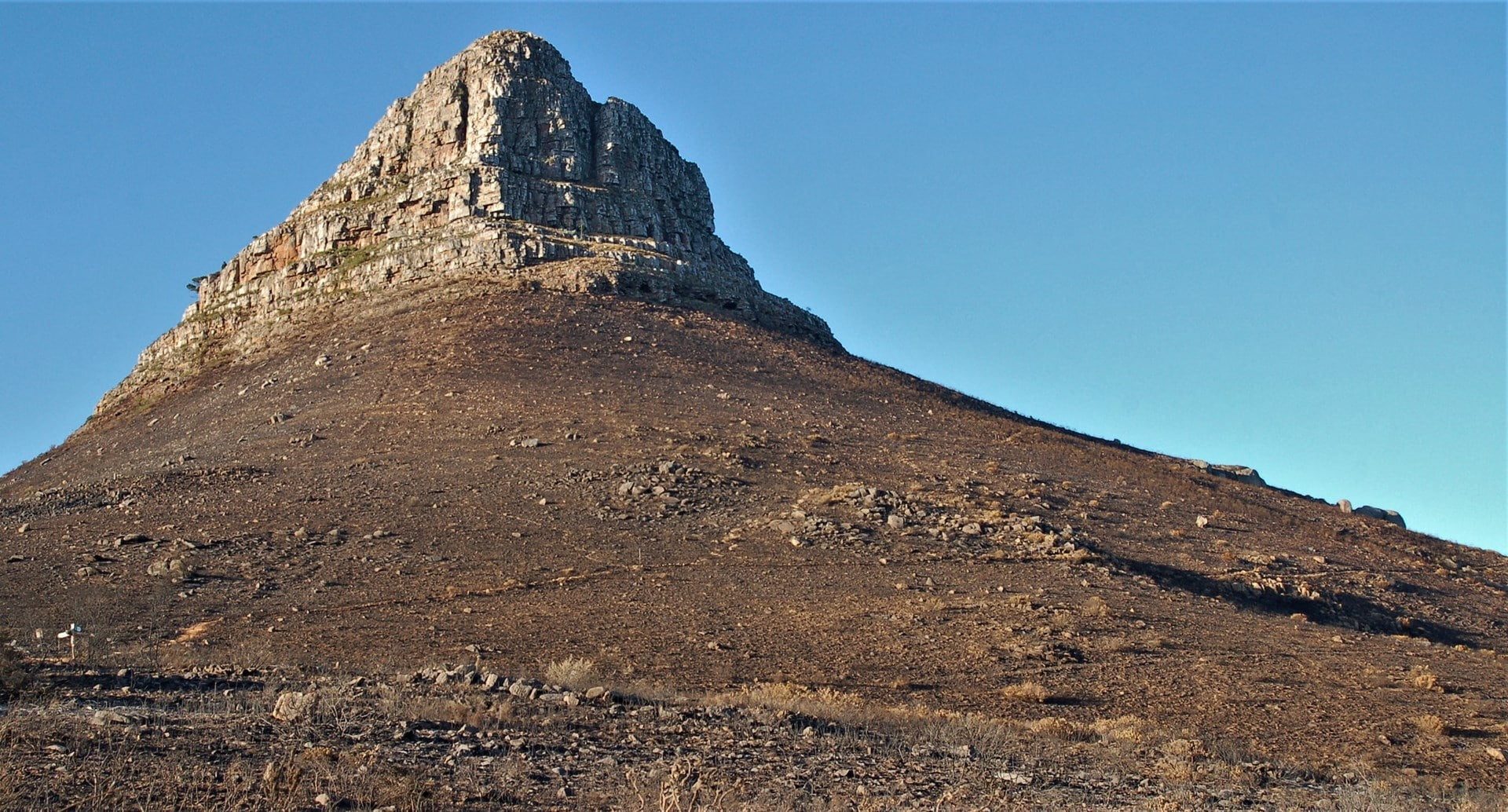 Shorn of vegetation after a fire, Lion’s Head reveals its geology: shale in the foreground, granite in the middle & sandstone at the top.

What makes it really interesting – in a botanical sense – is that each of rock layer blends into one other, creating what is known as an ‘ecotone’. And it is these mixed layers of rock that support a particularly diverse community of plants, many of which are – of course – only found locally. 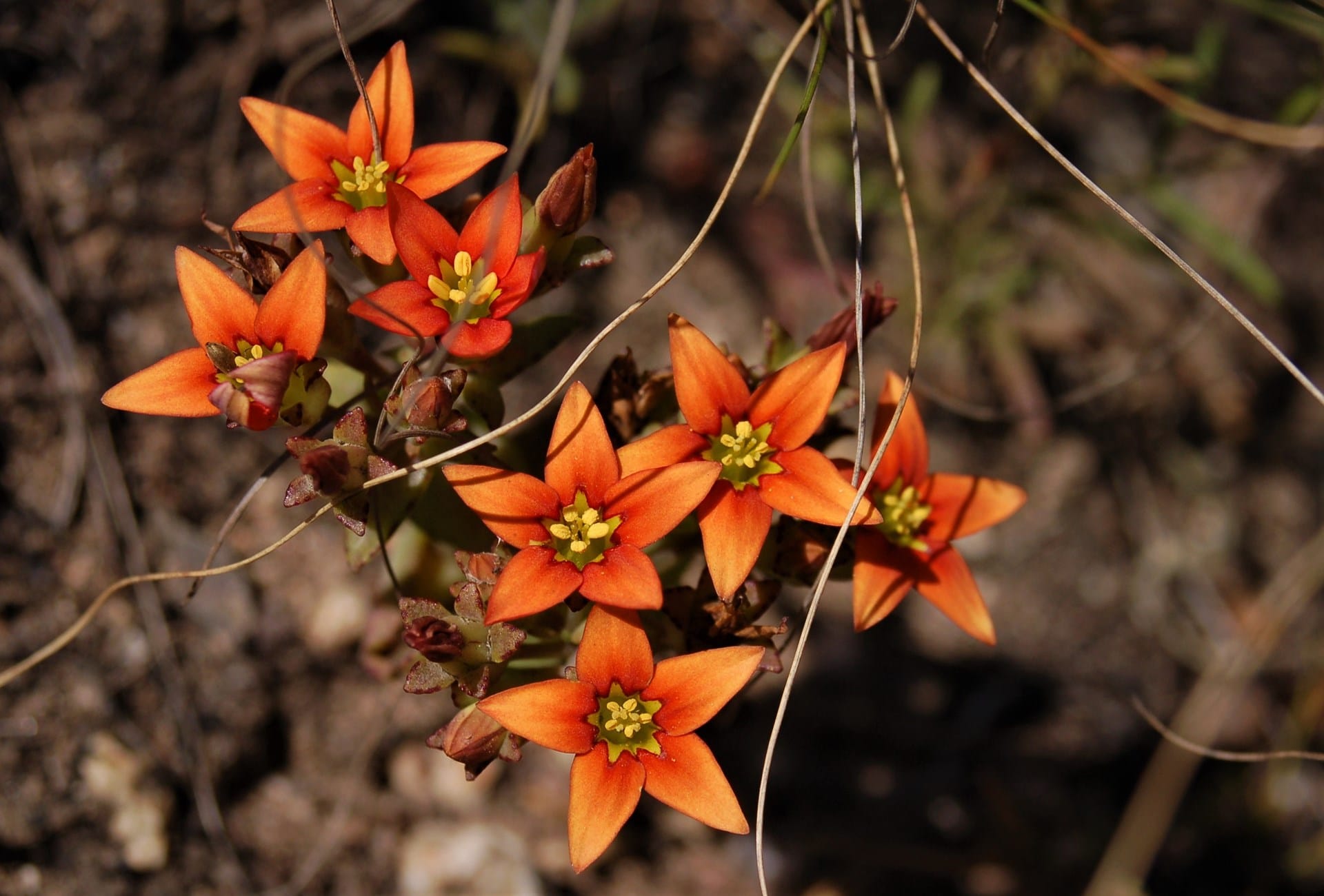 Crassula dichotoma is one of South Africa’s many succulents & I mean many: the country has 47% of the world’s succulent plant species. 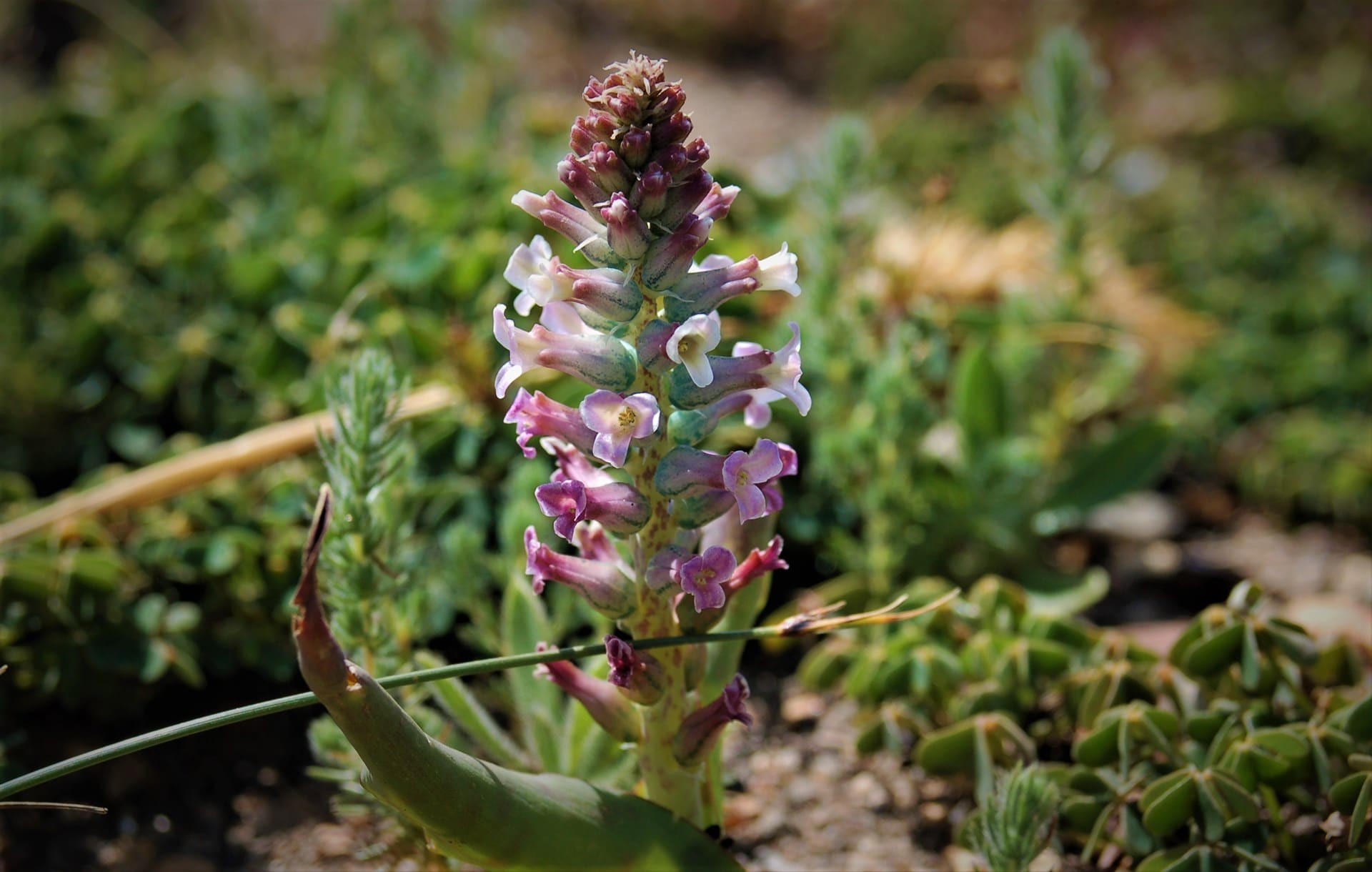 The Wild Hyacinth (Lachenalia orchioides) is a Blouviootjie in Afrikaans which thankfully translates as Blue Violet.

But there’s a missing ingredient to this floral feast and that is fire. Both Renosterveld and Fynbos have evolved to incorporate fire into their ecosystem and you won’t see half their flowers without it. Fire burns off generations of dead plant material, recycling it as nutrient-laden ash. And by clearing away the old shady vegetation, fire exposes the ground to sun and rain, triggering millions of patiently-waiting seeds and bulbs into germination. 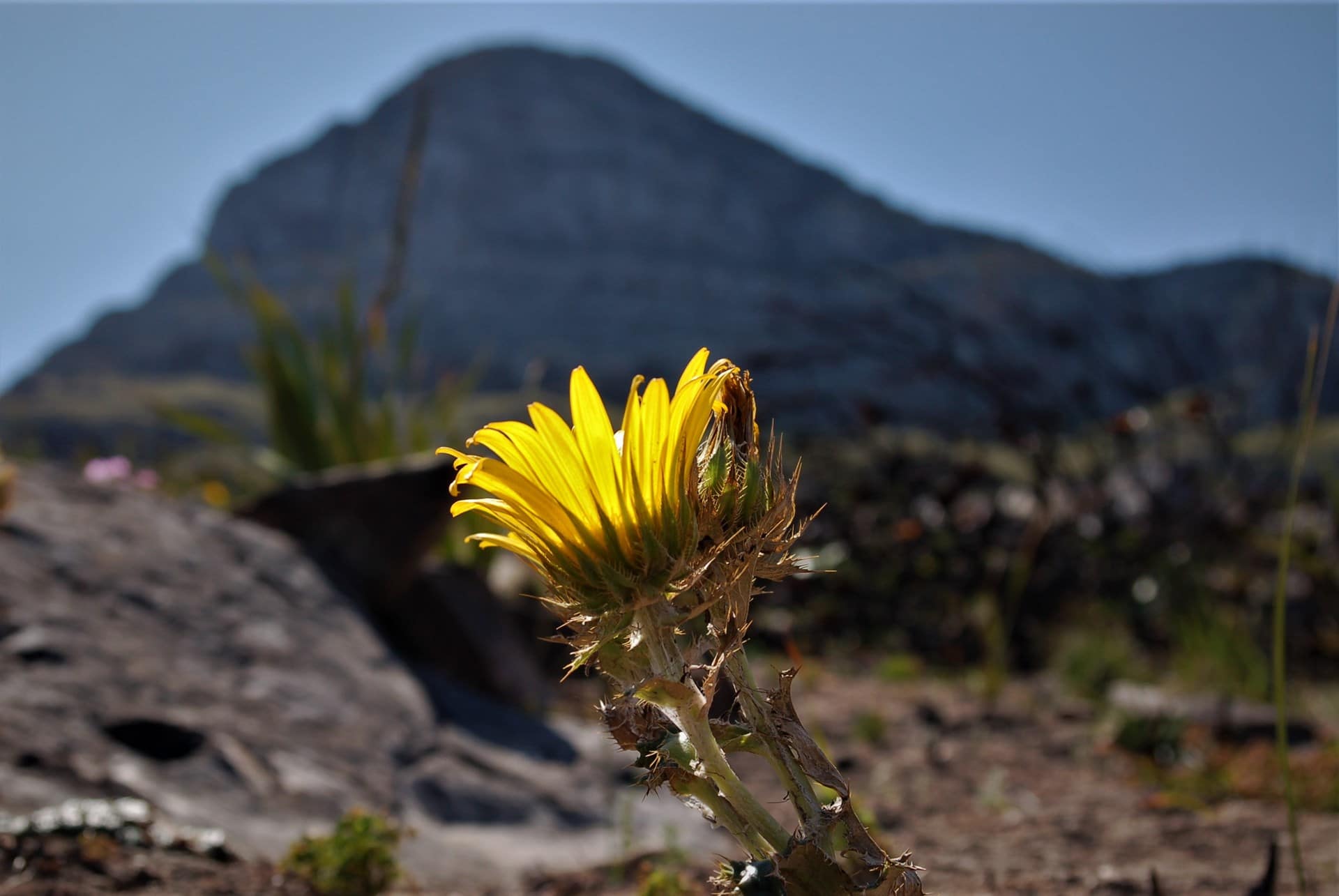 You’ll rarely see Berkheya armata in flower unless there’s been a fire – in which case you’ll see thousands of them.

Unfortunately, Lion’s Head burns far too often. It would be nice to have 10 or 15 or even 20 years elapse between fires but surrounded – literally – by a major city and at the mercy of careless humans, Lion’s Head endures fires every few years, resulting in a change of flora. The slower growers (proteas for example) are unable to produce mature seed in time between burns and gradually die off, leaving the landscape to become increasingly dominated by speedier colonising species such as pelargoniums, daisies and peas. Many of these are indigenous but some aren’t, and the steady encroachment of alien plants, especially grasses, is turning a bushy Lion’s Head landscape into a grassy one.

With petal markings perhaps resembling beetles clustering greedily at its centre, this Moraea (Iris family) hopes to entice a real beetle in as a pollinator.

Fire is, however, the great leveller. Alien plants also bow before its power as it sweeps the landscape clean. And it’s the first year after a fire that you’ll see the natural grow-back at its best as indigenous plants explode into leaf and flower, rejuvenated by fire and unimpeded by pine trees and grasses. The show starts in May and June with the first rains of winter and the number of flowers reaches a peak in August and September as temperatures rise and pollinating insects are abuzz. And like any great act, there are repeated encores: October and November are also great for flowers on Lion’s Head but if you can’t make it then, don’t worry: there will be something in bloom when you do – at least 20% of fynbos plants are in flower in any month of the year.

It’s easy walking too. In fact, if you are looking for flowers, you can skip the windswept summit – the fynbos up there is on the thin side – and stick to the lower level contour paths that wind between the shale and granite – much better for flowers. Simply park at the main Lion’s Head car park and walk uphill on the gravel road. You’ll reach a split in the path after 20 minutes or so – turn around here if you have had enough (the path now goes sharply uphill with ladders and chains) or turn left and make your way down the back of Lion’s Head in a loop back to the car park. 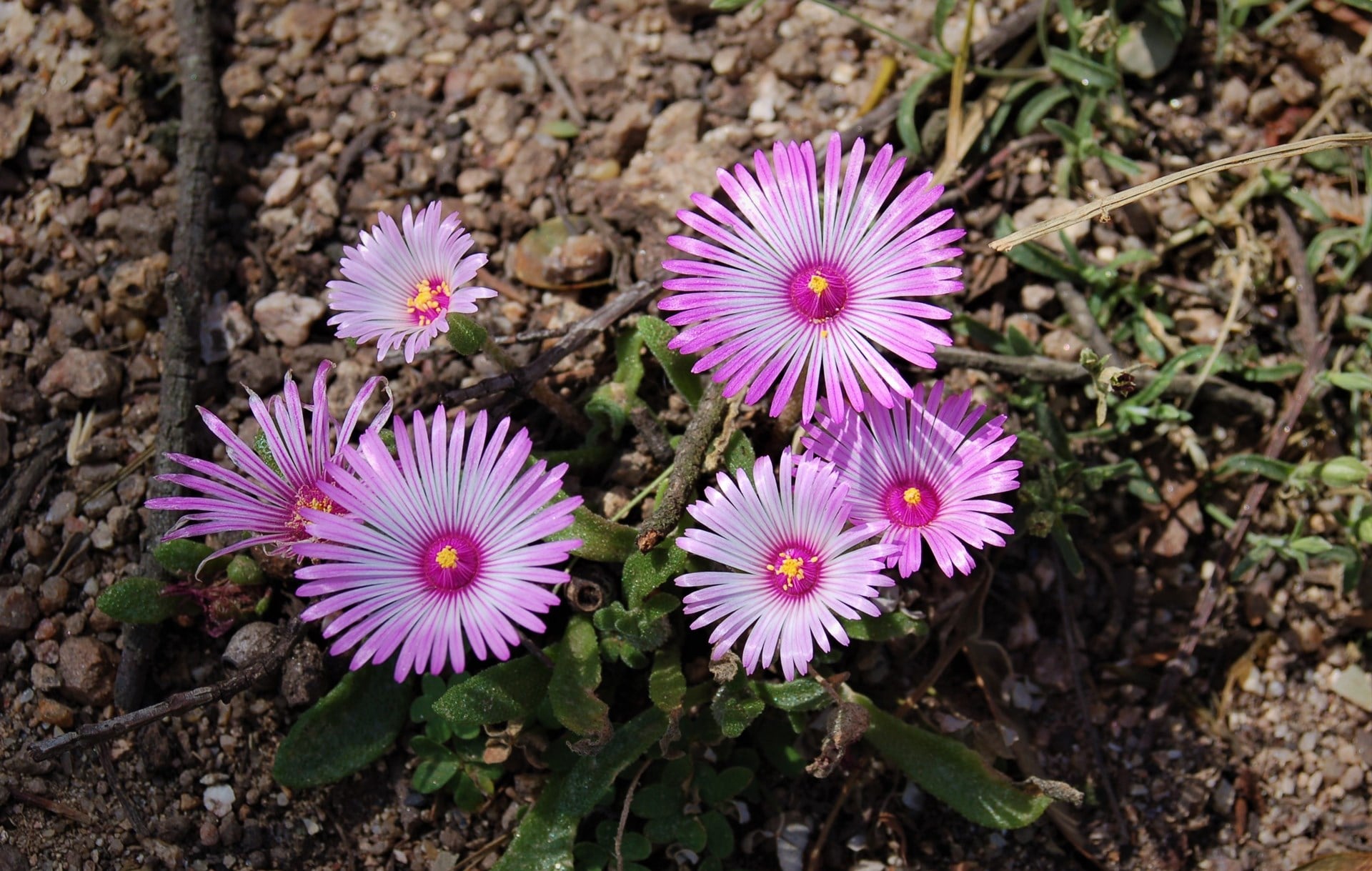 Dorotheanthus bellidiformis – the Bokbaaivygie – would have once carpeted lower Lion’s Head but is now restricted to a few patches of sunshine in between the eucalyptus trees.

If you feel like a shorter, easier walk, then there is a path that runs parallel to Signal Hill Road from the Lion’s Head car park to a kramat – a Muslim burial site. It’s got great views of the city and who knows, perhaps it was the one Burchell strolled along all those years ago. 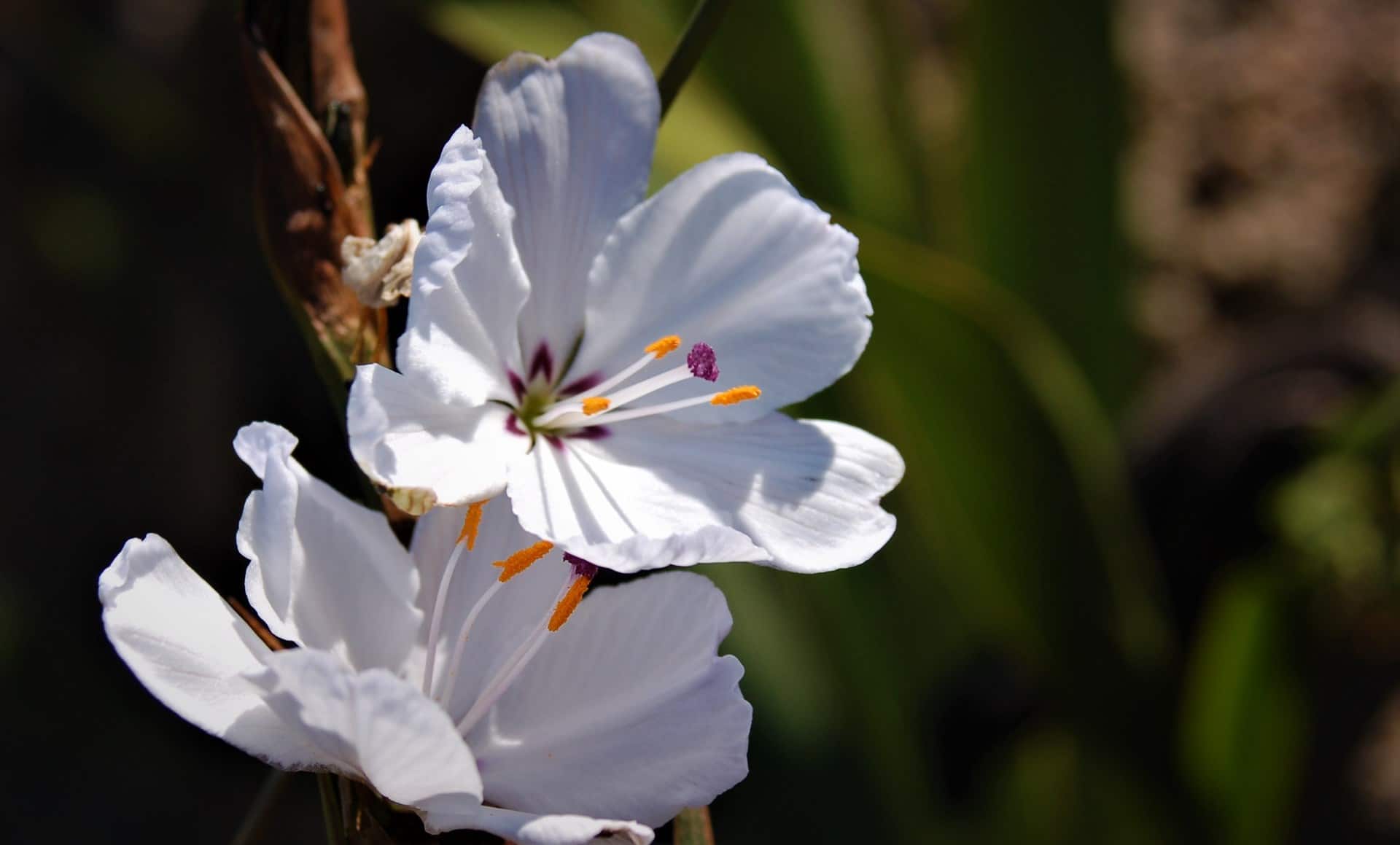 With its stamens offering what appears to be liquorice allsorts, Aristea spiralis never fails to catch the eye.