Nature Shows Off: The Cape Orchids 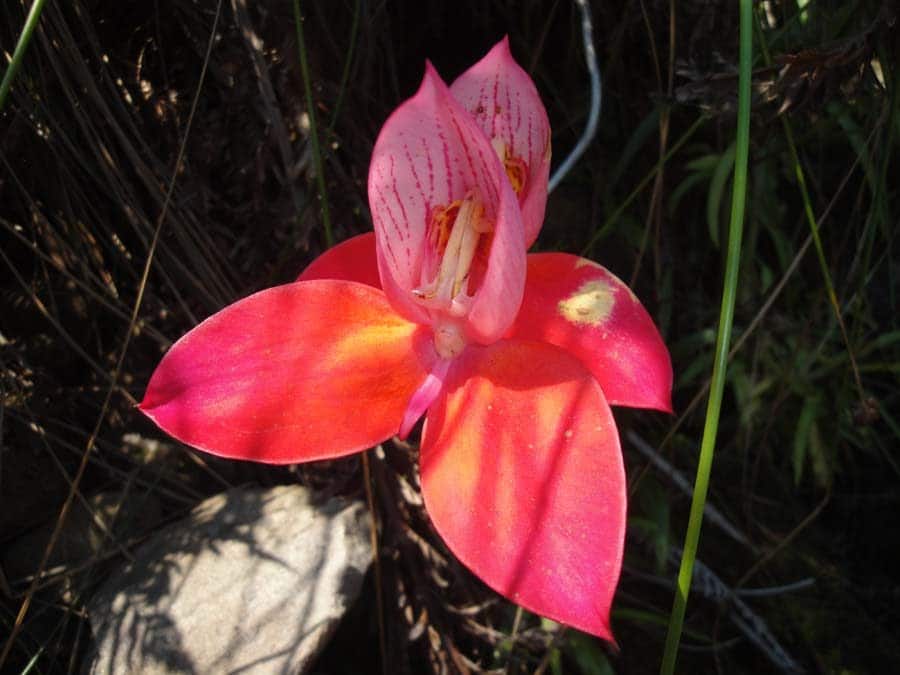 Their name comes from the Greek word for testicle and sometimes they are only seen after fire has incinerated their habitat: weird, wonderful orchids have long fascinated humankind and if you thought you had to go to steaming tropical rainforests to see them, then it will come as a pleasure to learn that South Africa has nearly three times more orchid species than the whole of Europe and a quarter of them are found on the Cape Peninsula. 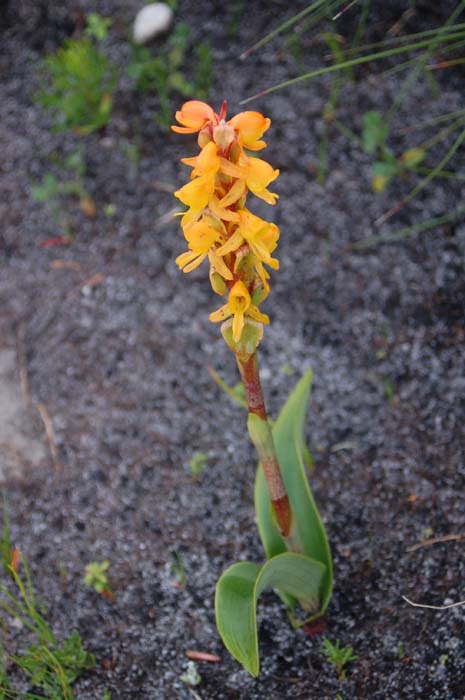 A raging fire induced this Satyrium to pop up out of the burnt sand at Silvermine near Table Mountain.

The Cape orchids are somewhat different from the extravagant tropical showpieces you see at art galleries and on smart dining tables. In the Cape’s wind-buffeted, fire-ravaged environment it pays to be small and to spend most of your life underground. But the flowers produced by the Cape orchids are no less astonishing than those in jungles of Ecuador, and their often ephemeral nature, coupled with limited distribution (a single wetland or mountain for example) means they can be as rare as black rhinos, blue whales and snow leopards. 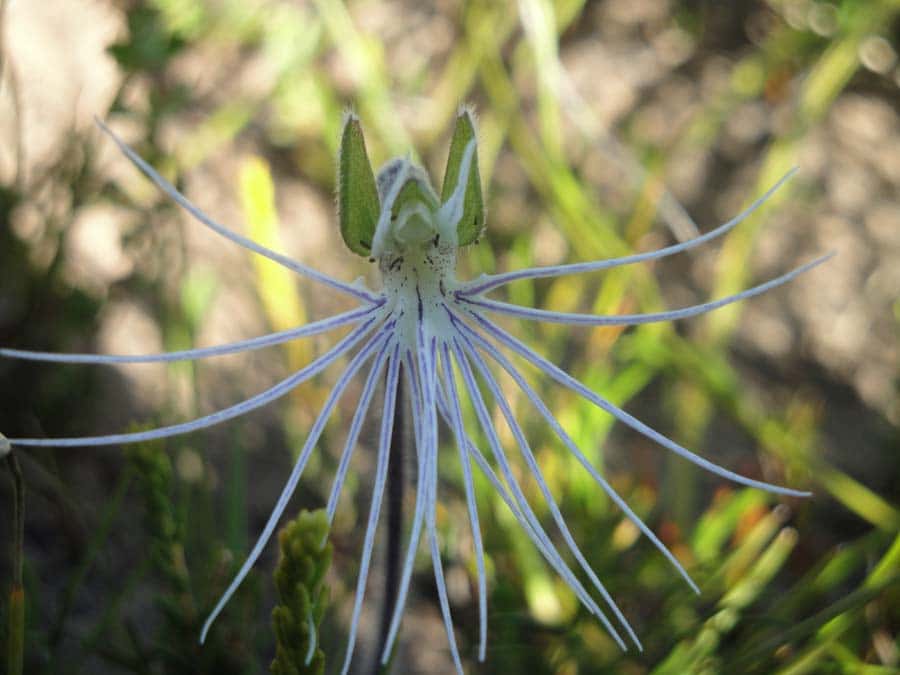 The exquisite beauty of a rare spider orchid – Bartholina burmanniana.

The orchids you see on Table Mountain or at Cape Point are ground orchids. Storing energy in an underground bulb, they erupt into life throughout the year, their flowering triggered by season or fire. Indeed, it is only after fire has swept through their fynbos habitat that many Cape orchids come into flower. By burning off the old, choking vegetation, the flames not only clear the surface for orchids to grow but deliver a set of nutrients too. 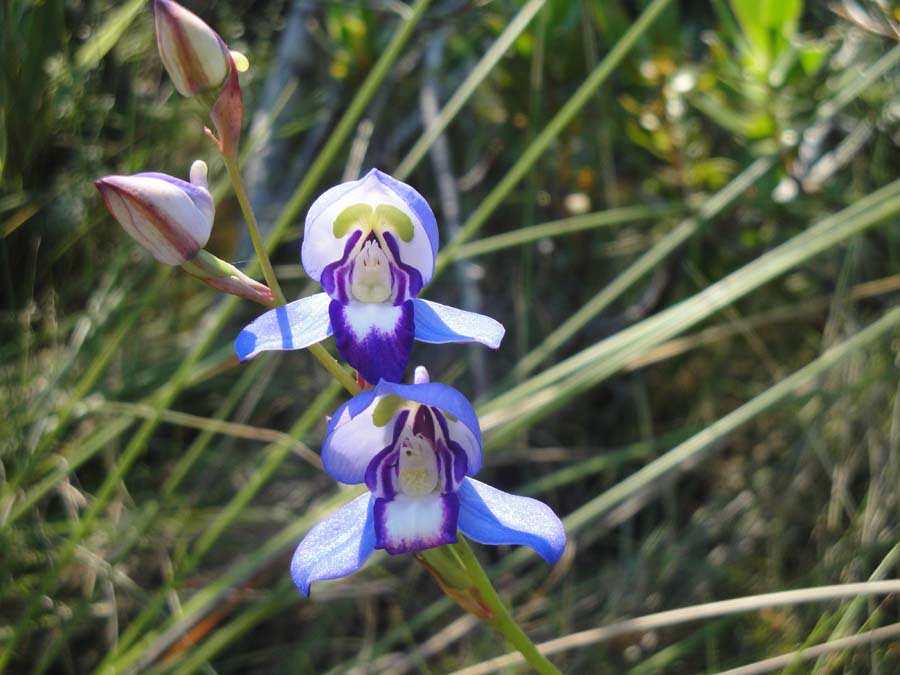 The bright colours of the blue disa (Disa gramminifolia) entice carpenter bees but this orchid has no nectar reward.

Spring and summer are the best times to see orchids, especially in an area that burned the previous year. Many are easy to find, growing on the side of the footpath at low altitudes; some require a hike up into the high mountains while others require an intimate knowledge of their habitat and flowering requirements. 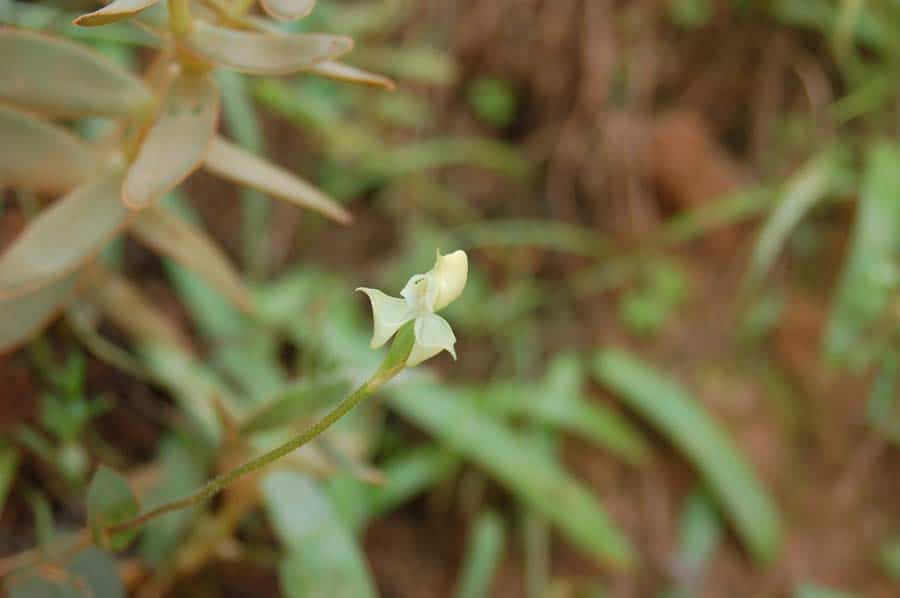 And I’ve yet to see a boring-looking Cape orchid. There is an extraordinary diversity of shape and size, ranging from plants nearly a metre tall to something you have to look at through a magnifying glass. Their colours span the spectrum from the deepest red to the inkiest of purples and their flower shapes include ones that look like witches’ hats, wasps or spiders. 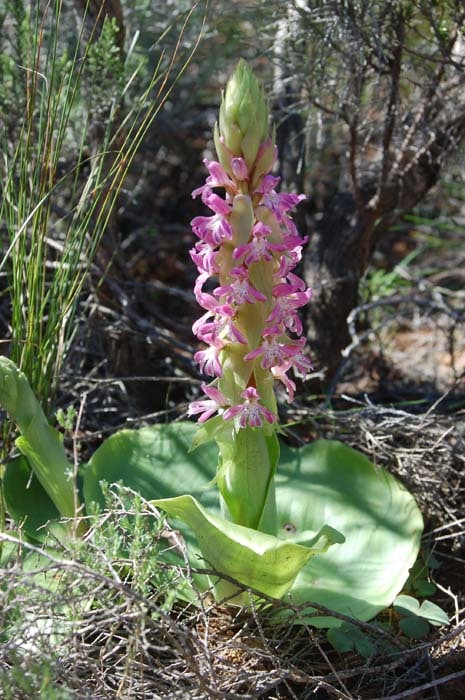 The aptly-named Satyrium erectum, found in dry areas & a big fan of fires.

The most famous Cape orchid is the red disa (Disa uniflora). Flowering in summer along mountain streams, its bright red flowers are irresistible to its pollinator, the Table Mountain Beauty butterfly. But other orchids have less obvious ways of attracting pollinating insects. Some release a foul scent to entice flies while others resemble the female of a particular insect species – a spider-hunting wasp for example – to trick the male insect into mating with it and effect pollination via its frantic fumblings. The sneaky cluster disa (Disa ferruginea) pretends to be another flower: its flowers look like those of nectar-rich irises but they have no nectar reward. The hapless Table Mountain Beauty pollinates it nevertheless, scrabbling around in the deep red flowers of the orchid as it tries to find the sugar. 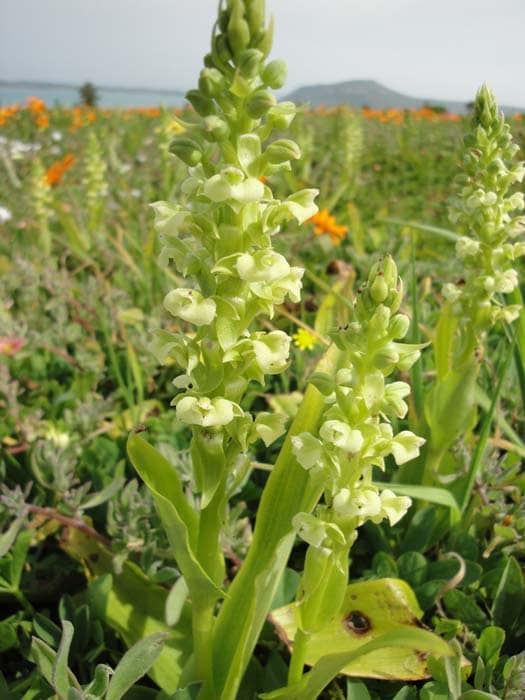 Orchids in the Pterygodium genus are known as the cowled friars, thanks to their hooded appearance.

But the problem with having so much highly localised diversity is that it leaves the natural landscape prone to serious problems. You can stand surrounded by fields of a certain Cape orchid but that may be the only place they occur. Put a golf course there and that’s the end of the species. A quarter of South Africa’s orchids are of currently of conservation concern and 70 are threatened with extinction. 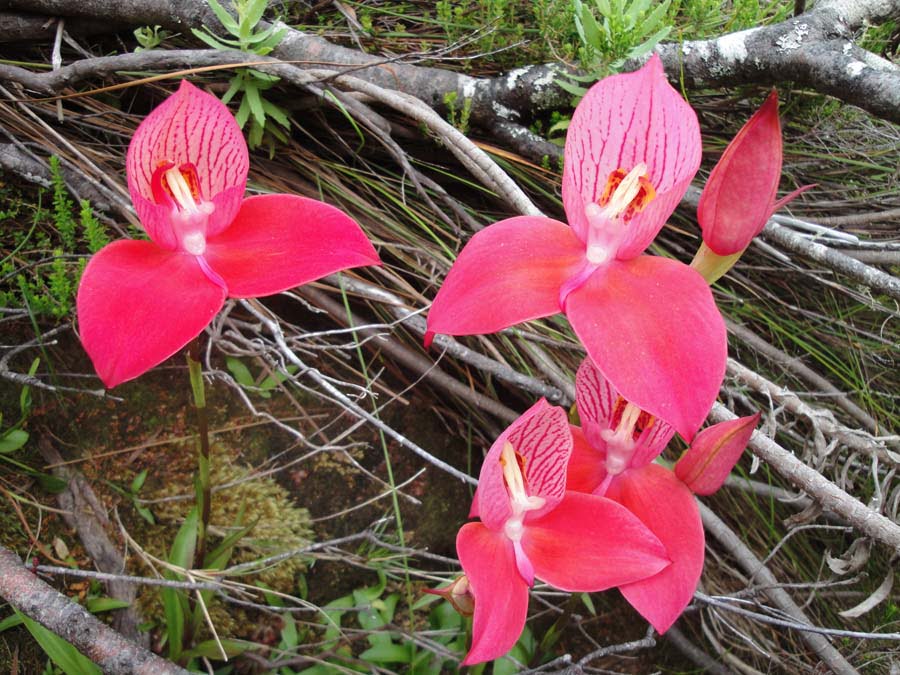 The more practical-minded among us may see orchid extinction as inevitable. After all, where Table Mountain’s two big reservoirs now sit were once carpets of red disas. Do we want drinking water or do we want orchids? And anyway, it’s probably no exaggeration to say that we have already lost dozens – maybe hundreds – of Cape orchids already and we all seem to be okay. 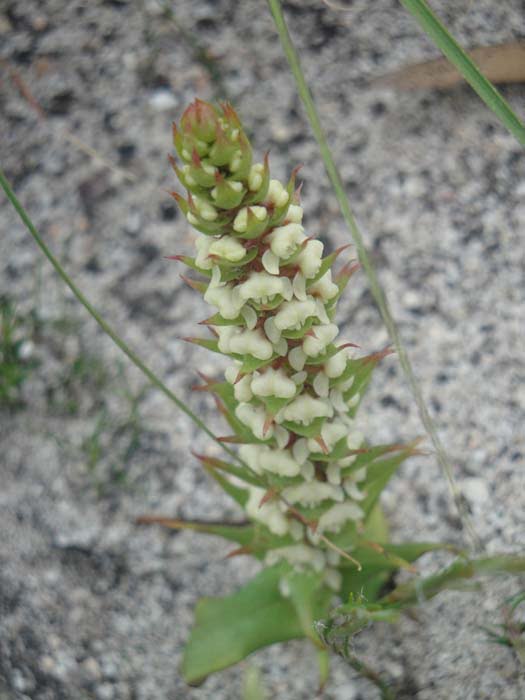 The Silvermine fire of 2015 triggered a mass flowering of orchids, including this Pterygodium.

But even if we are left with just the survivors, that may be enough. There are conservation organisations dedicated to their well-being and in a way they pay for their stay. Plenty of people, both locals and overseas visitors, huff and puff their way to the top of Table Mountain every summer for the red disas; others head off to more remote corners for rare and extraordinary orchids. Think of it as floral bird-watching.

And should we be left with just one or two, at least we’ll have a reminder of nature at her most outlandish, perhaps mischievous – an evolutionary path that has resulted in flowers that stretch the imagination and compel humans to scale cliffs and wade across rivers to merely see them. The Cape Orchids: they’re out there.