Wait! I’m not kidding: drive around Cape Town’s biggest water treatment plant and you’ll think you’re on the shores of an East African Rift Valley lake. Great lines of pink honking flamingos, patrolling birds of prey and giant pelicans flying in to land like bombers on an aircraft carrier – all within half an hour’s drive from the centre of Cape Town. And it doesn’t even smell.

Flamingos are the signature birds of Strandfontein; their grace & colour never fail to dazzle.

Strandfontein Sewage Works has long been the worst-kept birding secret in Cape Town. Part of a larger nature reserve, its 300 hectares (750 acres) of open water pans, reed beds and indigenous strandveld vegetation lie just a few metres away from the Indian Ocean. The result is an amazing diversity of birds (around 170 species) living there in serious numbers – over 30 000 individual birds on one occasion. 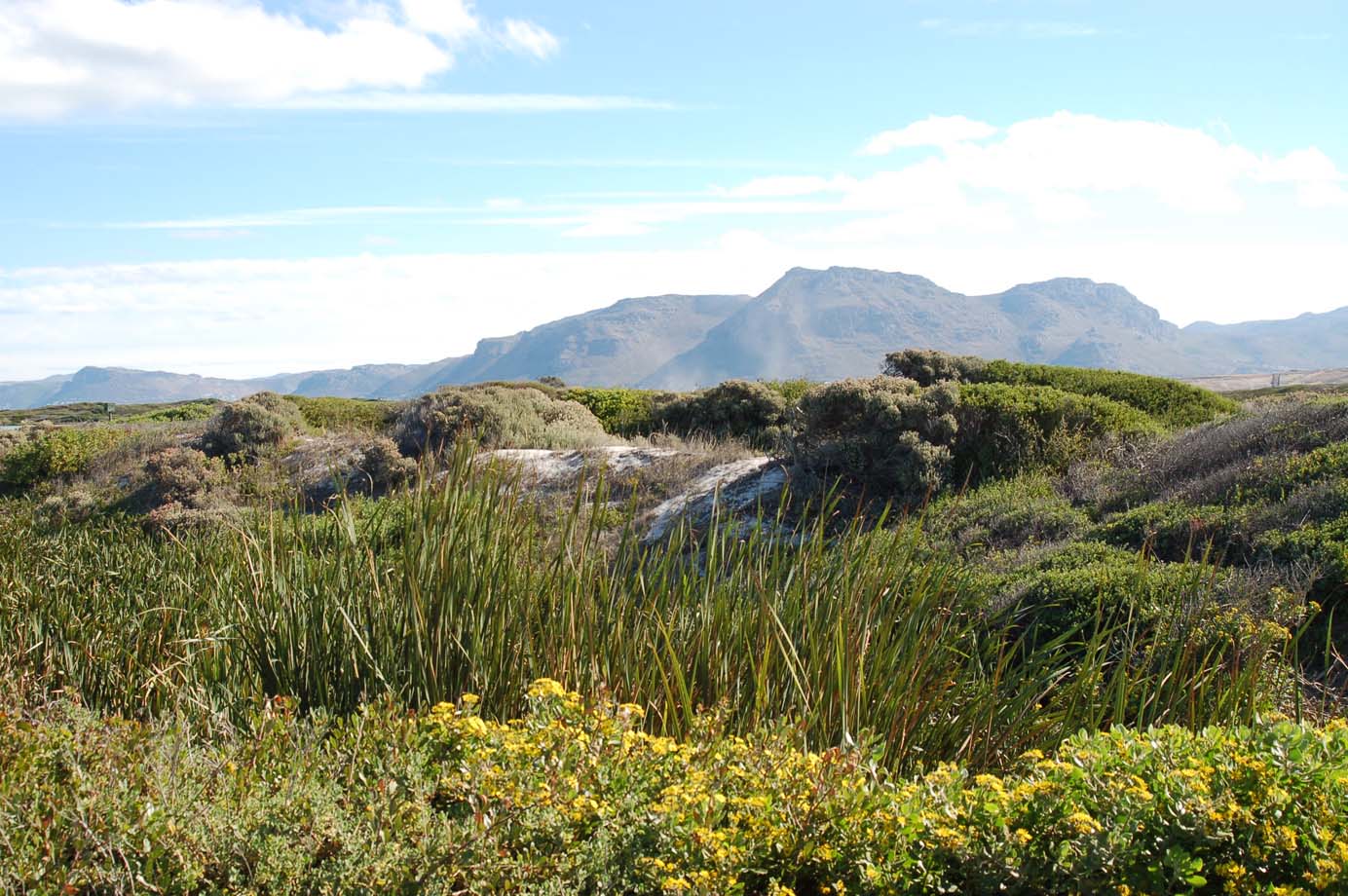 It’s an official RAMSAR site (an international wetland conservation body) and home to mongooses and snakes, the Cape grysbok (a small antelope) and even – and I speak from over-excited experience – a caracal, a medium-sized cat similar to a lynx. There are frogs and chameleons and two endangered butterflies, found only in the immediate area. 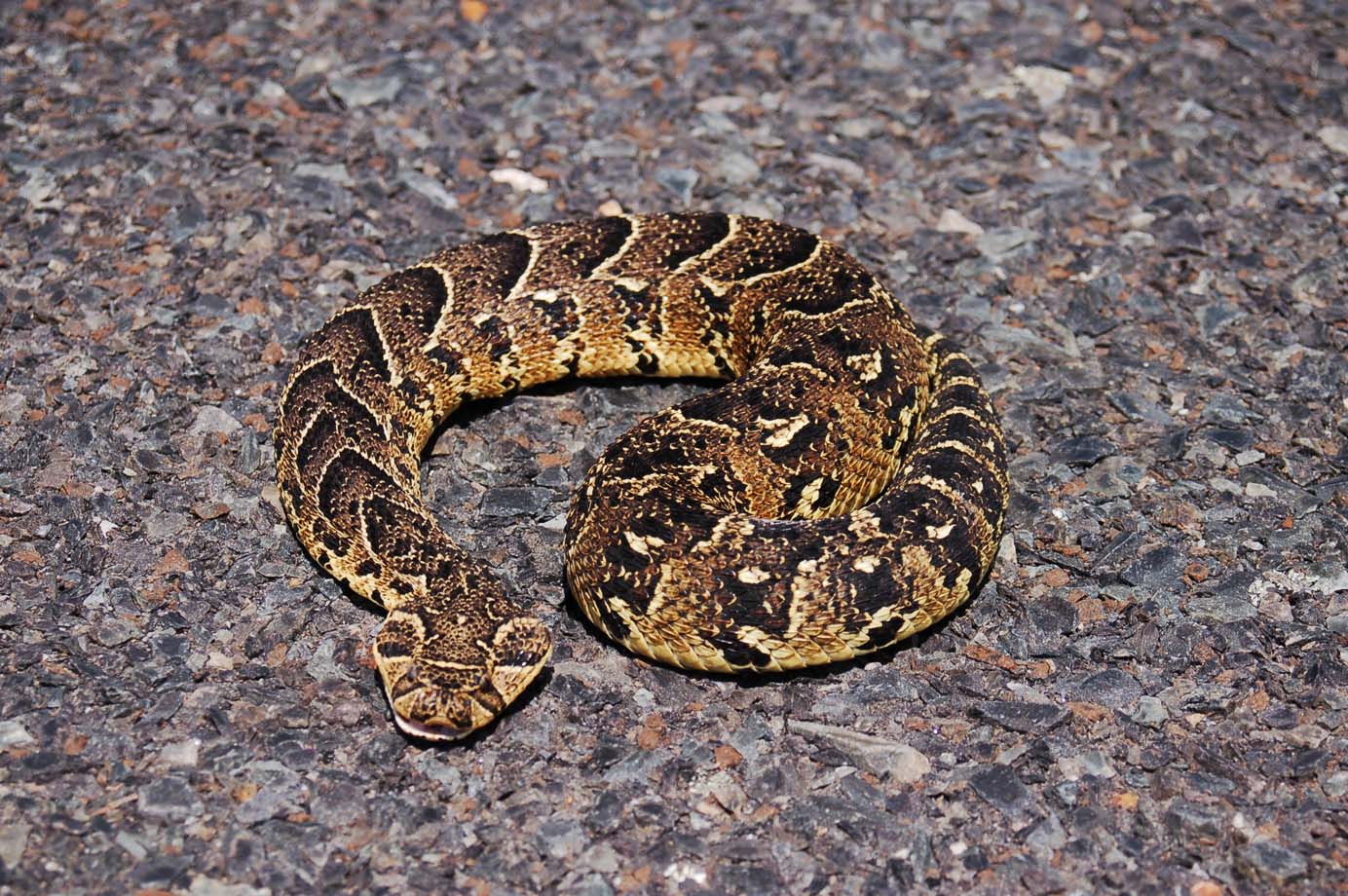 A small puff adder, seen on the road leading to Strandfontein’s entrance gate. Greater flamingos are paler than lesser flamingos & have a light pink beak rather than a dark one.

Lying on the Cape Flats, Strandfontein Sewage Works is not the easiest place to find and is best visited with a knowledgeable guide. It is also a car-based birding destination: walking around the pans would be hot and exposed for the birder and frightening for the birds. Much better to load up with binoculars, camera and picnic basket and meander around slowly on four wheels. There are several places to get out and stretch your legs but no bathroom facilities. 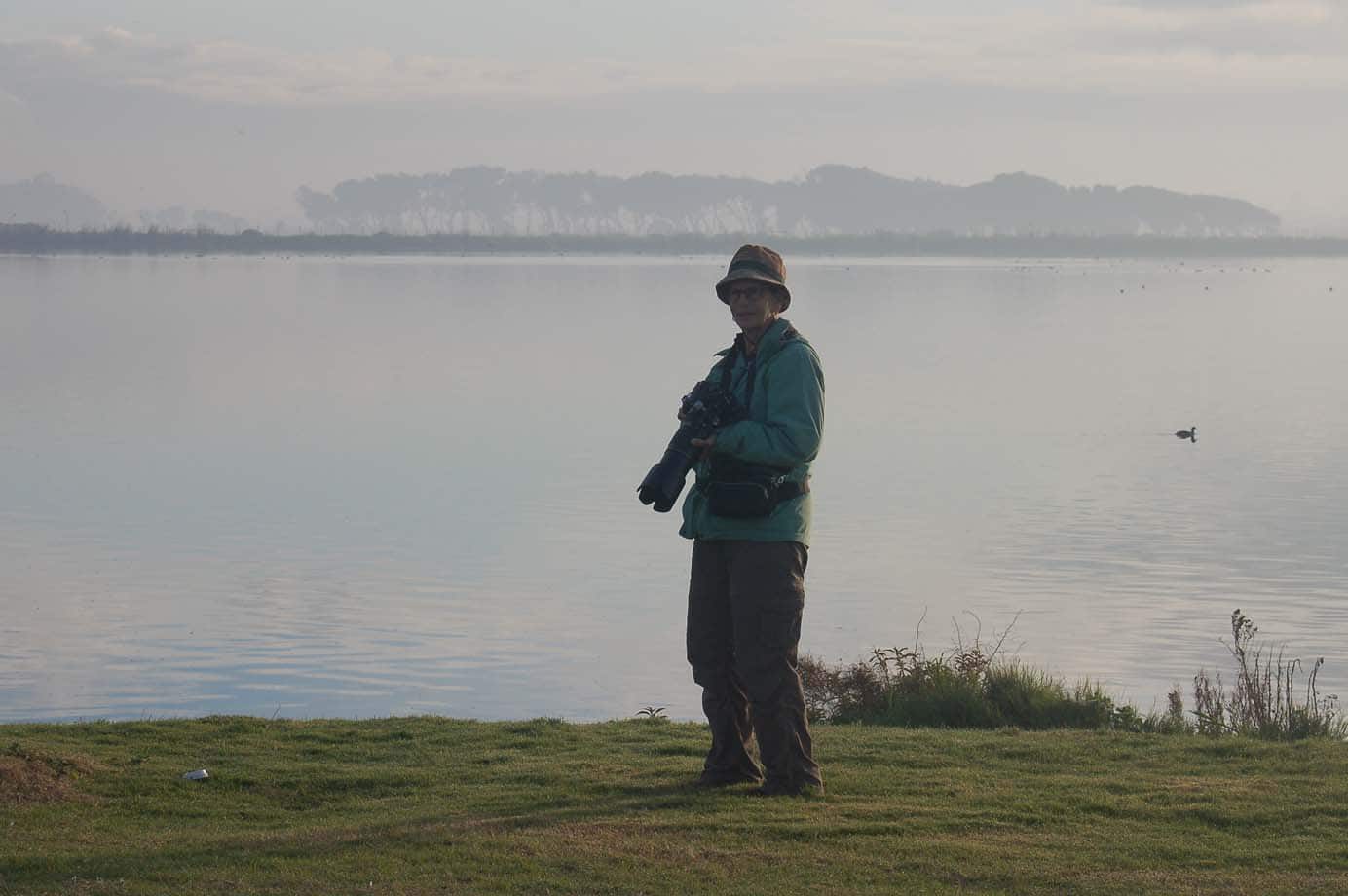 Strandfontein is highly recommended for bird photographers but get there early for the best conditions.

Rewarding at any time of year, Strandfontein can easily yield between 60 and 70 species in a day but perhaps the best time to visit is during summer when large numbers of wading birds arrive from the northern hemisphere – sandpipers, turnstones, stints and terns. There are often exciting vagrants and oddities – the African jacana for example, more associated with the Okavango Delta – as well as several regional rarities like the Cape longclaw and African black oystercatcher. A local special – the Cape longclaw – at home in dry scrub near Strandfontein’s pans. 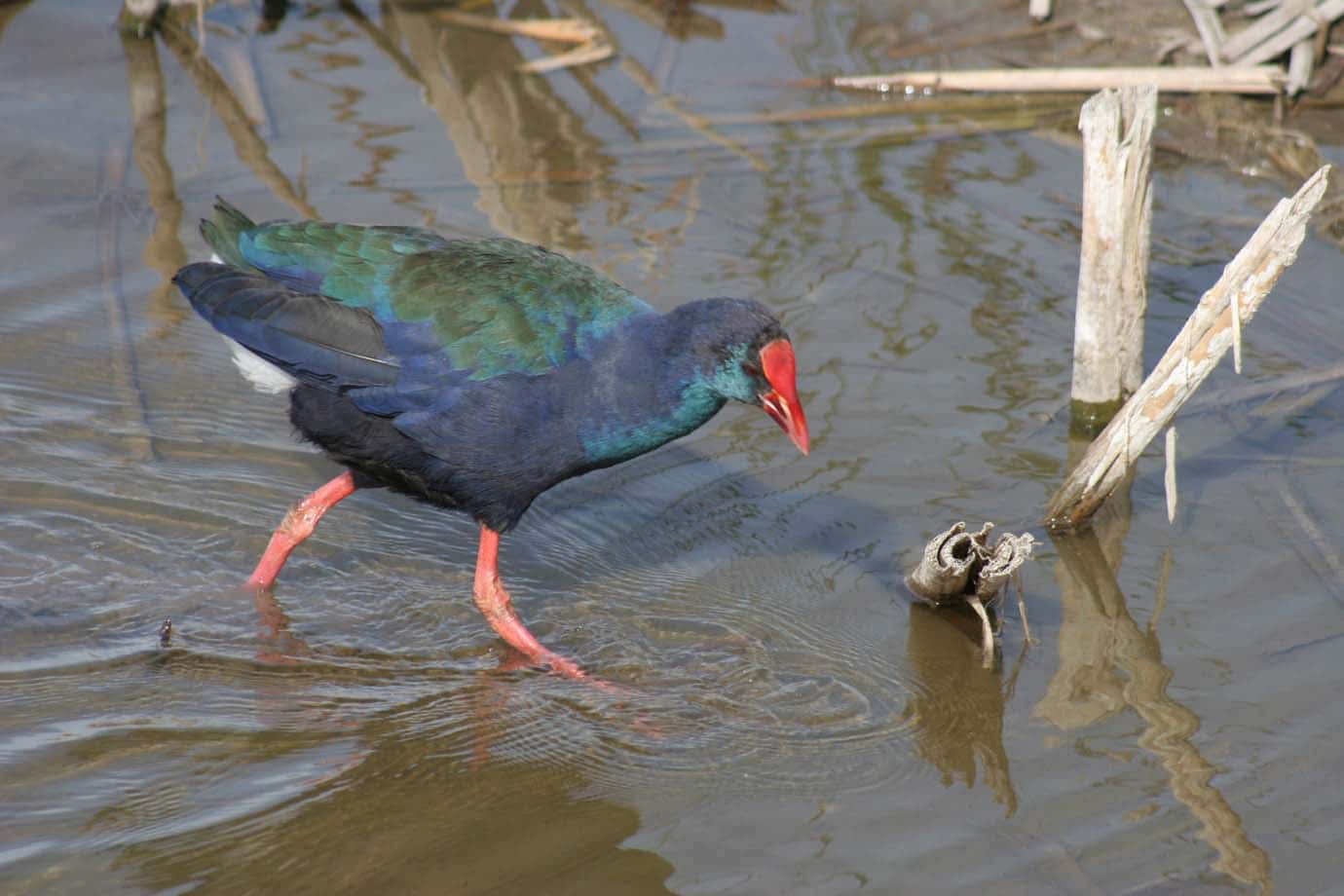 The African swamp hen is a classic reed-bed skulker, spending most of its time hiding from binoculars & cameras.

But it’s the flamingos that really catch the eye. Both greater and lesser flamingos occur at Strandfontein, usually in squabbling, fussing flocks that take off in an explosion of pink when you get too close. Flamingos have returned to Cape Town in large numbers in recent years leaving everyone a bit puzzled as to why. Especially as it’s a mystery where they go to breed; it certainly doesn’t happen at the sewage works. 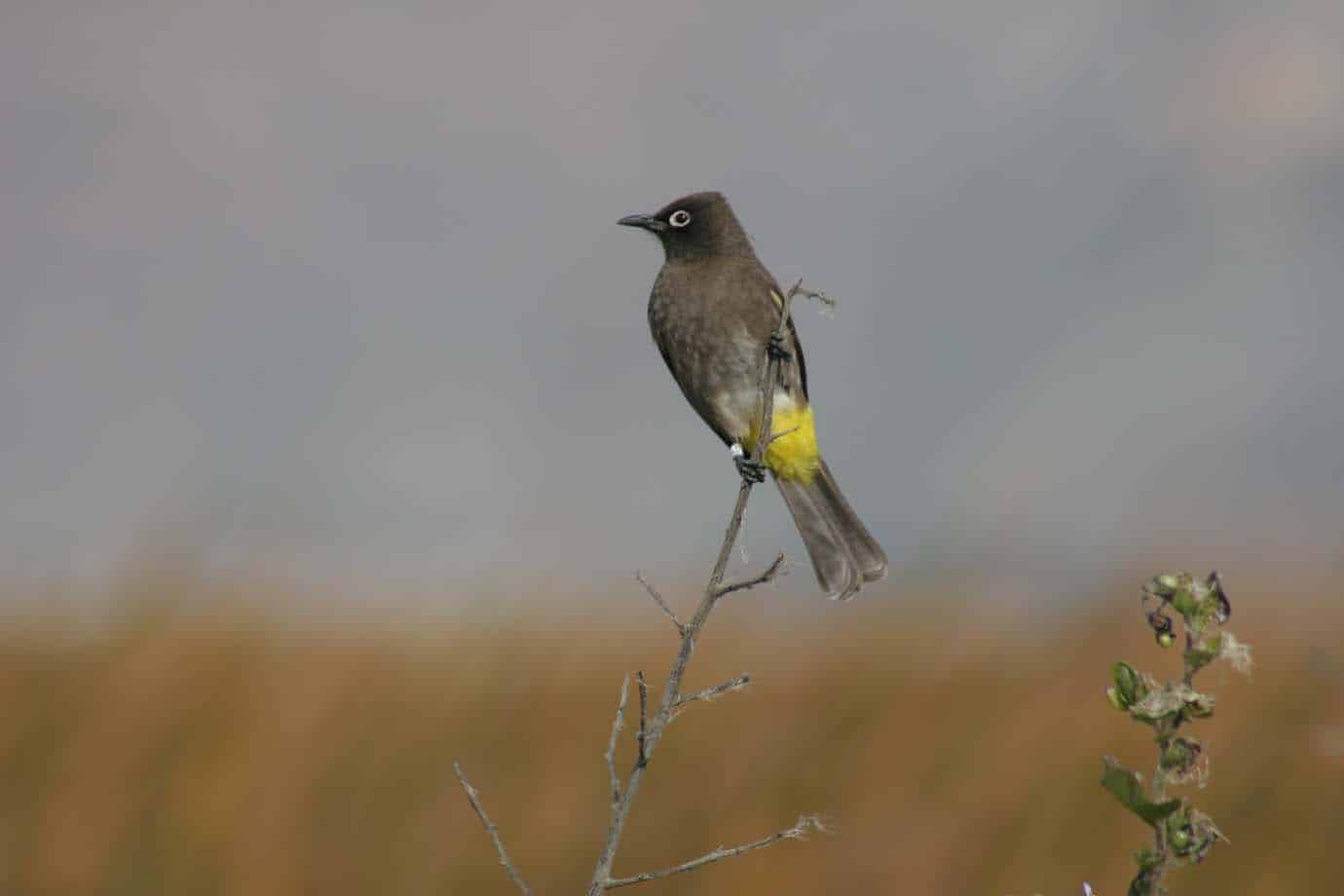 The cheerfully chirping Cape bulbul is bound to make an appearance, just one of Strandfontein’s 170 recorded bird species.

Go as early as you can stand it; the gate opens at 06:00. Early morning tends to be the least windy time of day and the mirrored waters of the pans are something to see when covered in birds. Prepare for strong winds in summer; Strandfontein is the first bit of land hit by the raging south- easterly wind after swooping across False Bay, making bird watching and photography somewhat challenging. But whatever the weather, there’s always something to see at Strandfontein Sewage Works – paradise with a purpose.