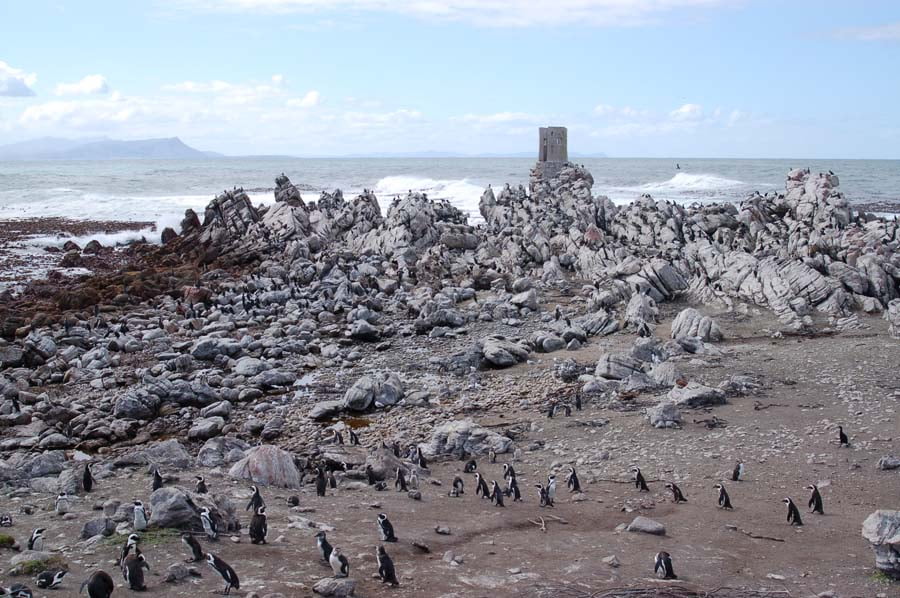 I’m afraid I have to start with some bad news: African penguins at Simons Town’s world-famous Boulders Beach colony are in disastrous decline. The population has fallen by nearly 90% since the mid-1990s and there’s little sign of recovery.
Shoals of sardines and anchovies – staple food for penguins – have moved south, possibly due to climate change; the relentless gouging of local waters by commercial fisheries means little is left. Pollution, predation by a growing Cape fur seal population, and perhaps the stress incurred by the 700 000 people who visit them every year also play their parts.
But what is bad news without good? Stony Point Nature Reserve in the superbly-named Betty’s Bay is one of Africa’s most successful African penguin breeding colonies. It is little over an hour’s drive from Cape Town, a trip that includes one of the most spectacular stretches of coastal road that you are likely to ever see. 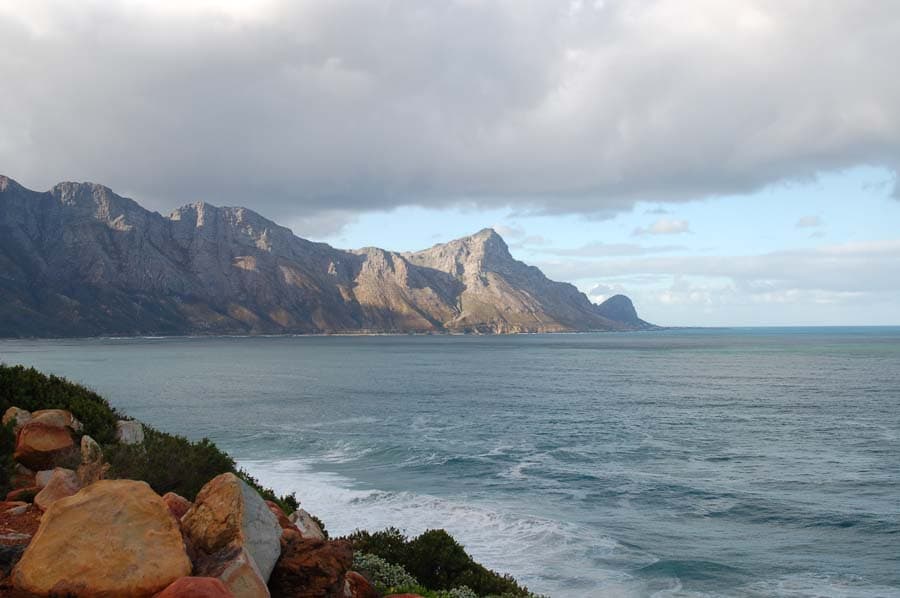 The road to Stony Point makes its way along the eastern side of False Bay, giving you dramatic views all the way.

The reserve is reached via a wiggle through the labyrinthine roads of Betty’s Bay (follow the penguin signs) and sits on the site of a former whaling station. Indeed, penguins were resting on an old concrete slipway when I arrived one quiet morning, a slipway once used to haul dead whales out of the water for processing.
But there’s no sound of grisly butchery these days: the air rings instead with the air horn-like braying of male penguins claiming a territory, overlaid by the curious fluttery chatter of thousands of cormorants and an occasional nails-down-the-chalkboard screech from patrolling seagulls. 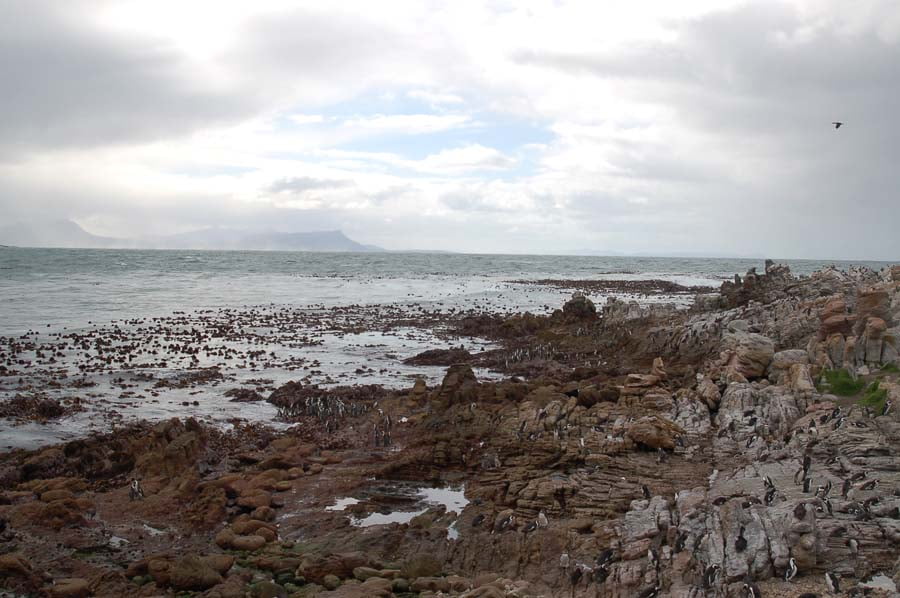 Looking across the bay towards the town of Hermanus: in spring, you can combine penguins with whale watching.

The penguin colony here isn’t immune from the overall decline of the species but there are 170 000 of them at Stony Point and I saw plenty of – ahem – breeding going on. They are everywhere – mated pairs, stony-faced juveniles and fluffy chicks – all going about their business as if we weren’t there. 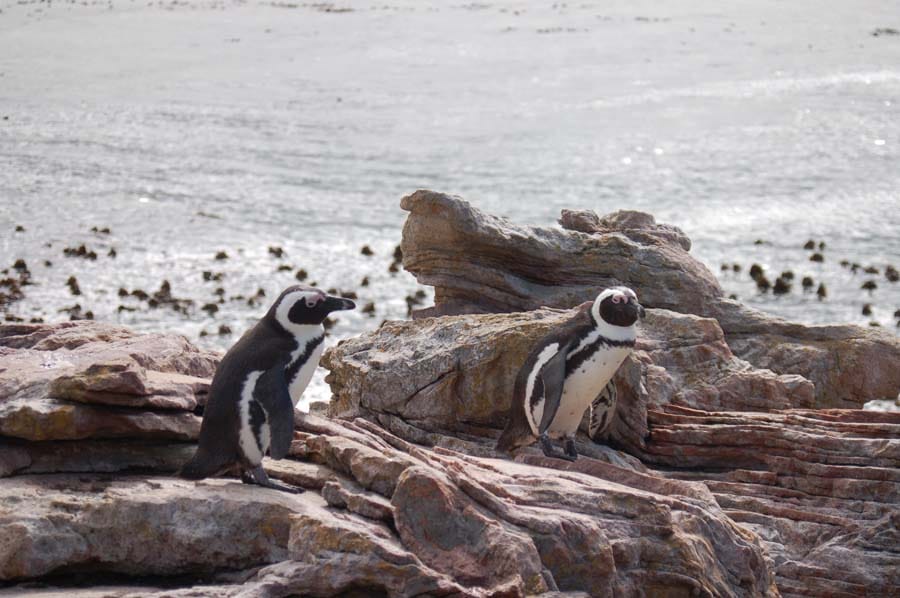 African penguins are generally monogamous & stick with their partner for life.

There is something endearingly human about penguins: their dinner-suit plumage, the slightly drunk two-legged walk, their bad tempered behaviour. But penguins show sensitive touches too: couples gently preen each other or fuss about the state of their nest, artfully rearranging a piece of seaweed or driftwood. 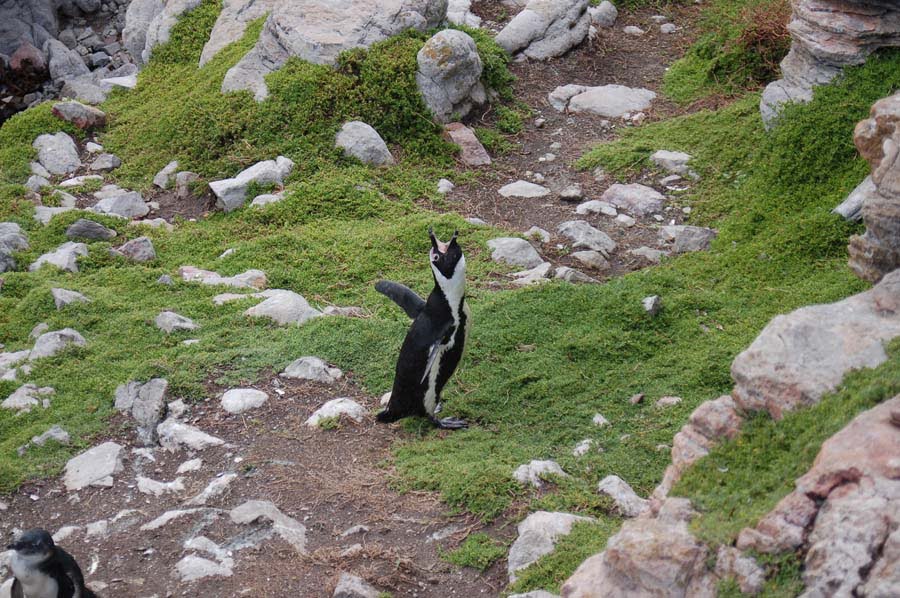 They used to be called Jackass penguins, thanks to their honking, donkey-like mating call.

Stony Point is a great destination for other birds too. You can see up to four cormorant species here as well as passing terns and even Cape gannets, stiff-winged ocean birds riding the uplift of the waves. And kelp gulls of course, the skinheads of the bird world: the shiny-headed masters of hanging around and looking for trouble. They are hoping for an unguarded penguin egg to take and crack open on the rocks like a bottle of champagne. 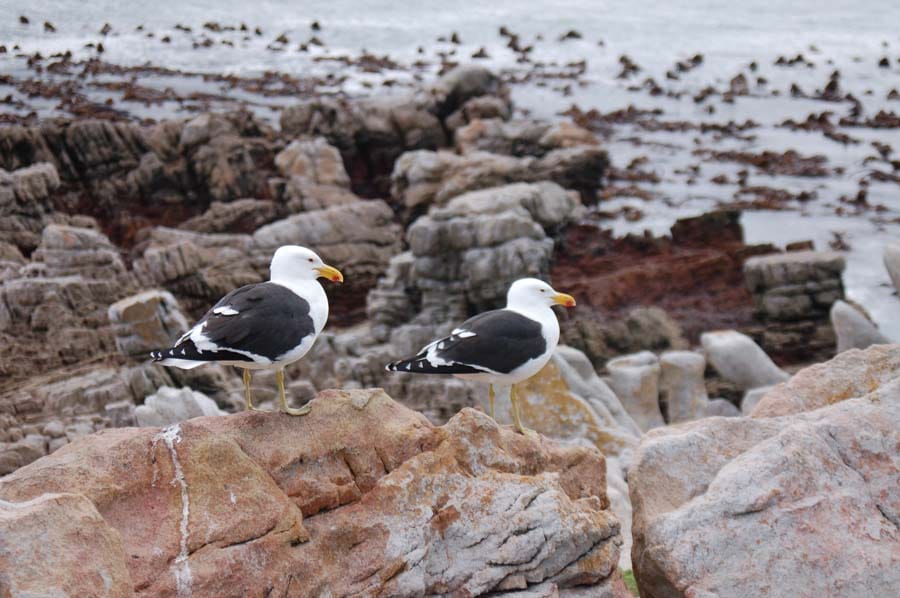 Kelp gulls affect a nonchalant air but they are on the lookout for unguarded penguin eggs to steal. 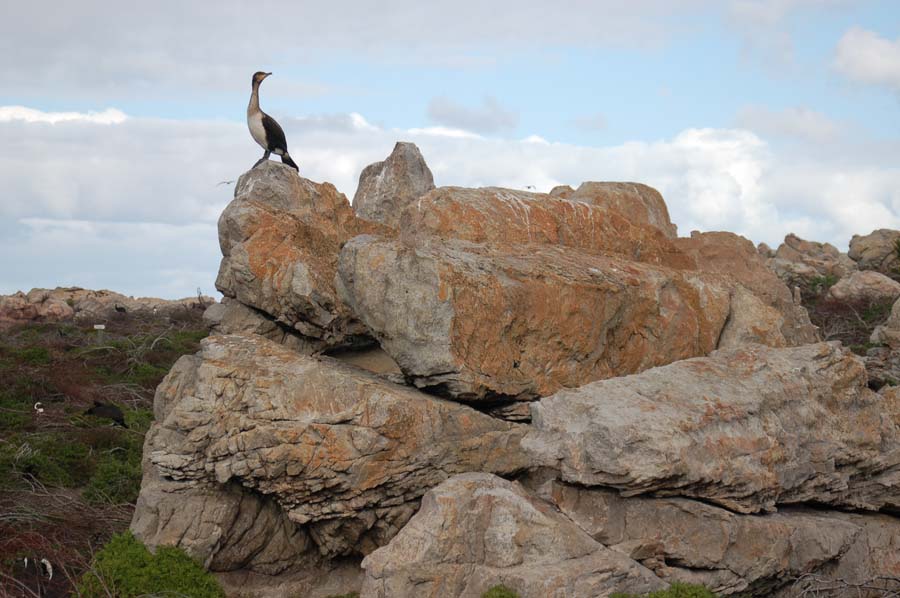 A white-breasted cormorant, one of the four cormorant species that breed at Stony Point.

There are lots of dassies too, those chubby rodent-like mammals that are actually related to elephants and rhinos rather than rats or guinea pigs. Far more of them here than at Boulders Beach and if you sit quietly for a while at Stony Point, you may even glimpse a small grey mongoose (that’s its name but it also doubles as a description of it) working its whisker-twitching way through the colony.
Run by Cape Nature and always manned by staff with a smile, Stony Point Nature Reserve has an entry fee a third of the price of Boulders Beach and a tiny fraction of its visitors. I was there on a sunny Saturday in peak whale season and by mid-morning there were only 20 or so other people on the boardwalks. Boulders Beach shovels 5 000 people a day through its turnstiles in summer and you have to push your way through the crowd like you’re in a Friday-night bar. 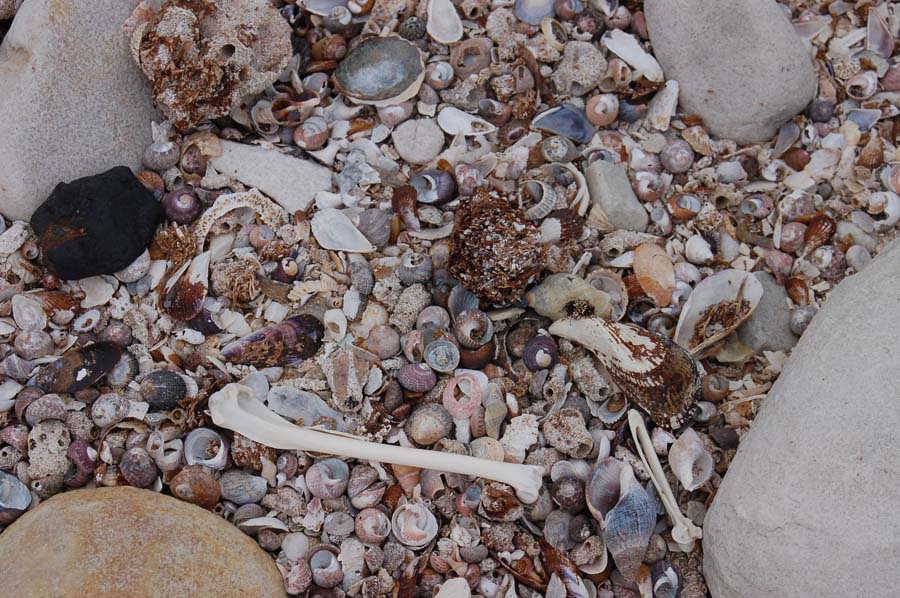 A stroll along the beach at Stony Point reveals a treasure box of marine life.

And once you have had your fill of penguins so to speak (and the local leopard certainly does; it killed 13 penguins in August this year), you can get back in the car and drive the short distance to another little-known natural beauty, the Harold Porter Botanical Gardens (Kirstenbosch without the queues), or dip into the nearby Kogelberg Biosphere, a pristine fynbos reserve complete with hiking trails and overnight accommodation. There is also Rooisands Nature Reserve – a bird watching gem – in the next village of Kleinmond, and if you carry along the coast for another 30 minutes you arrive at Hermanus, home to the best land-based whale-watching in the world.