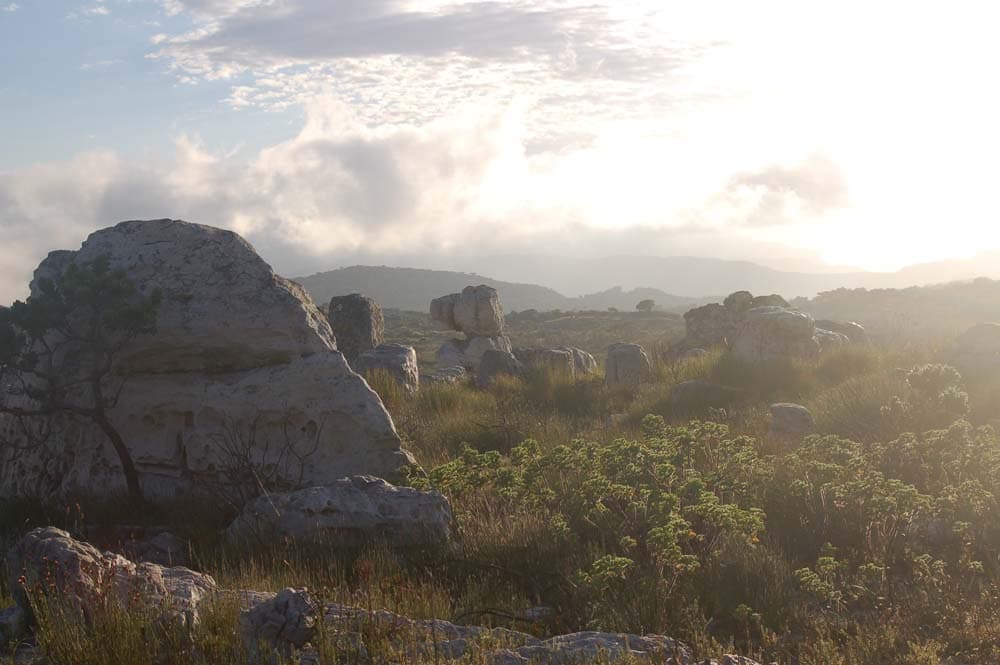 Lying quietly between Simons Town on the Indian Ocean and Scarborough on the Atlantic, the Red Hill mountains are largely unknown even to locals. But it is an easy hiking environment of mostly flat paths meandering around a pair of reservoirs, and Red Hill currently offers an enticing proposition: a post-fire environment. 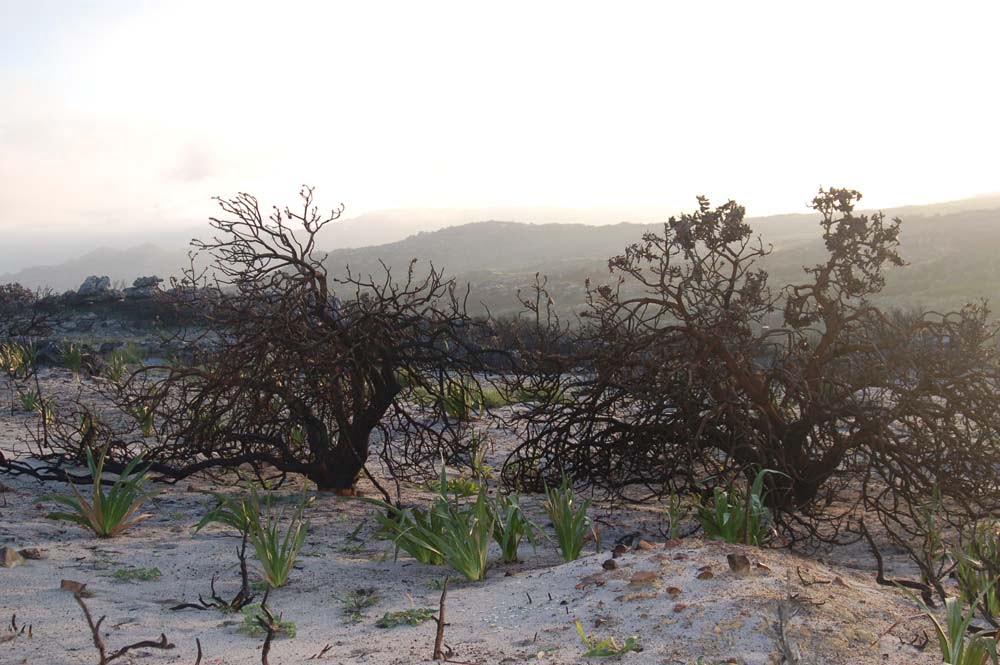 Irises burst out of the sand, six months after the fire.

Red Hill is an area of especially rich fynbos vegetation and the good news is that it was swept by a raging fire six months before my visit. The resulting grow back is already remarkable. Fynbos, of course, relies on regular fires to clear old and dead plant material and return it as nutrients; fire also acts as the stimulant for fynbos plants to grow, their seeds to germinate and bulbs to bloom – and at Red Hill you can see it happening right in front of you. 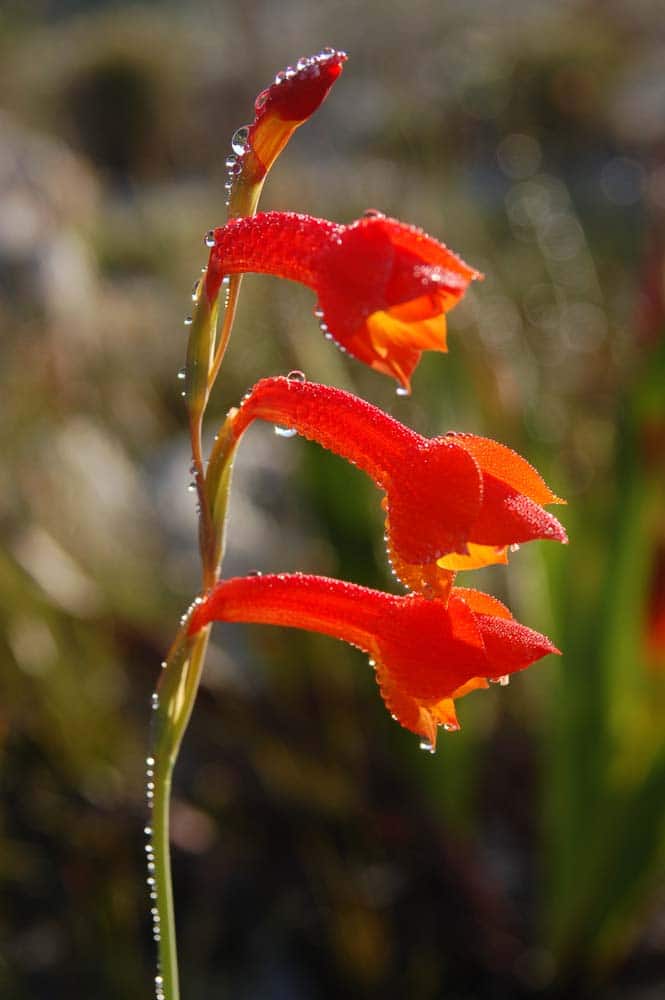 The exquisite beauty of Gladiolus bonaespei, a Cape Peninsula endemic. 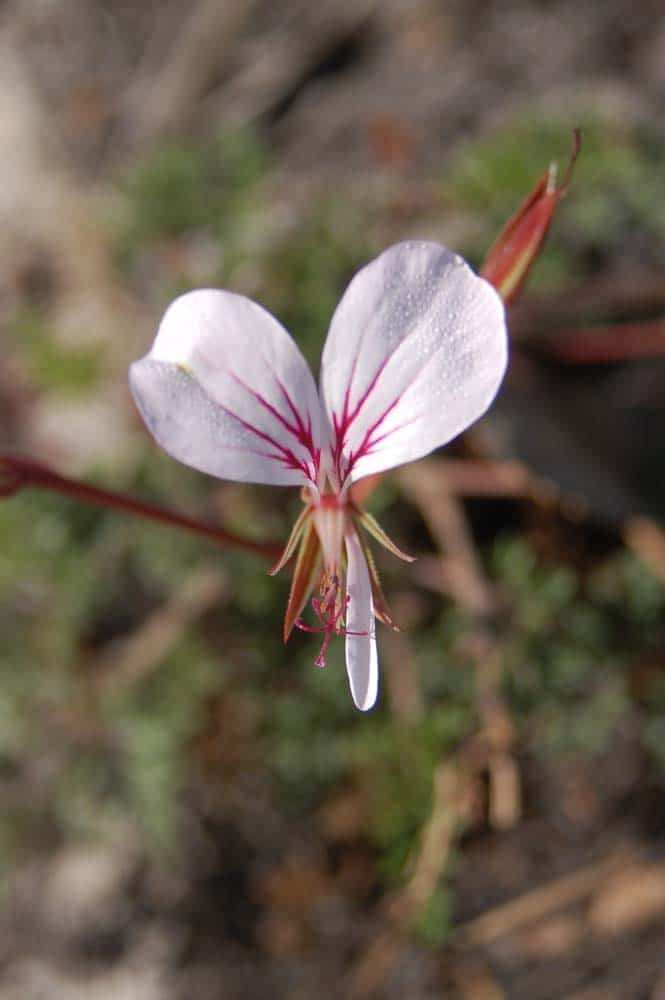 Pelargonium myrrhifolium, is a sprawling member of the Geranium family.

Fynbos plants have evolved three ways to survive fire – indeed, to use fire as part of their life cycle. Some plants are ‘resprouters’ – growing back from a thick fire-resistant stump or root. The skeletal protea bushes still standing at Red Hill have dormant buds under their thick bark that are triggered into growth by the chemicals in fire – ethynol and ammonia – and they will be green-leaved again within a year. 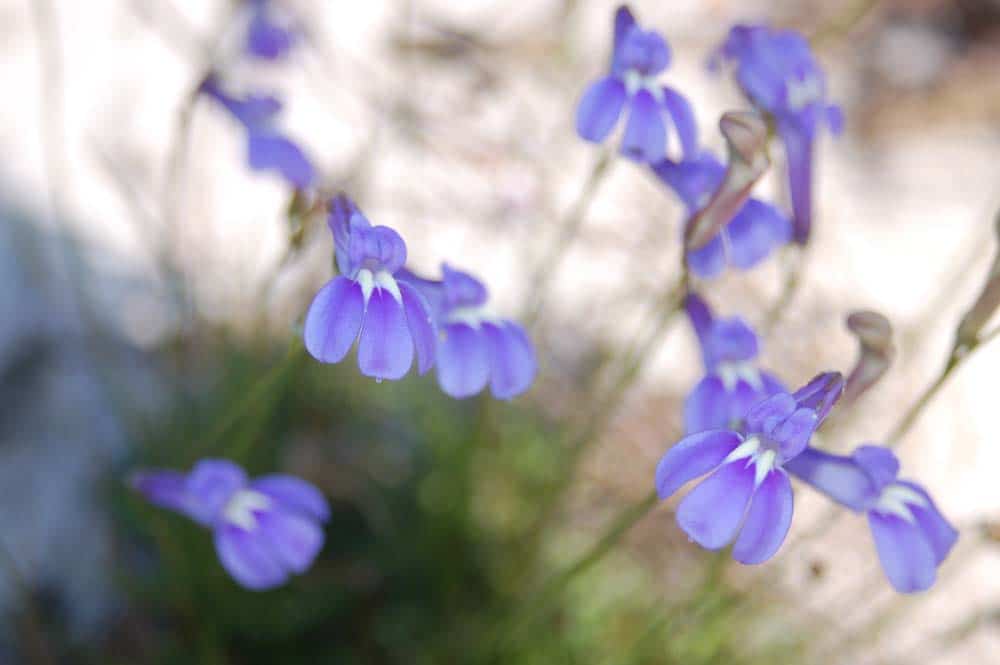 A shower of Lobelias shivering in the winter wind. 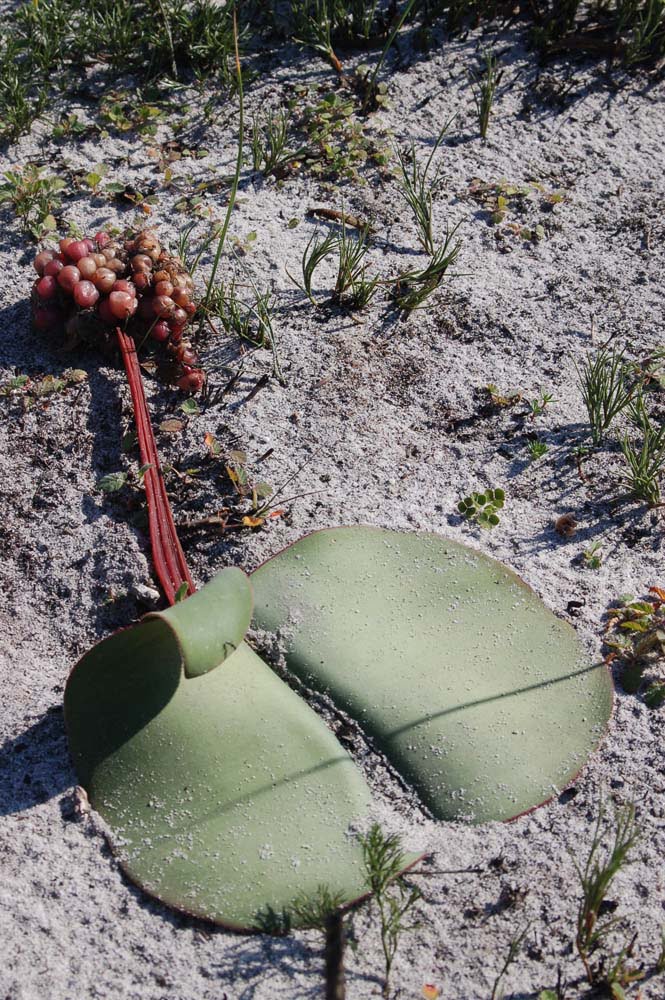 Haemanthus sanguineus lowers its fruit-laden stalk to the ground for tortoises to eat & disperse its berries.

Other plants are ‘reseeders’. Having safely dispersed their seeds before the fire or in its aftermath, these ‘mother plants’ are lost to the flames; within a few weeks hundreds then thousands of seedlings take their place. After the winter rains, the apparently lifeless and burnt ground here will be a thick green carpet of tiny plants all racing to make the most of the optimum growing conditions.

The third way to survive a fire is to stay underground. Many fynbos plants sensibly sit out most of the year – especially the hot and dry summer – below the ground and erupt en masse after a fire, stimulated by a combination of full sunlight and a healthy dose of nutrients. Known as geophytes, they include the iris, orchid, hyacinth and amaryllis families and are responsible for some of the more staggering displays of floral beauty. 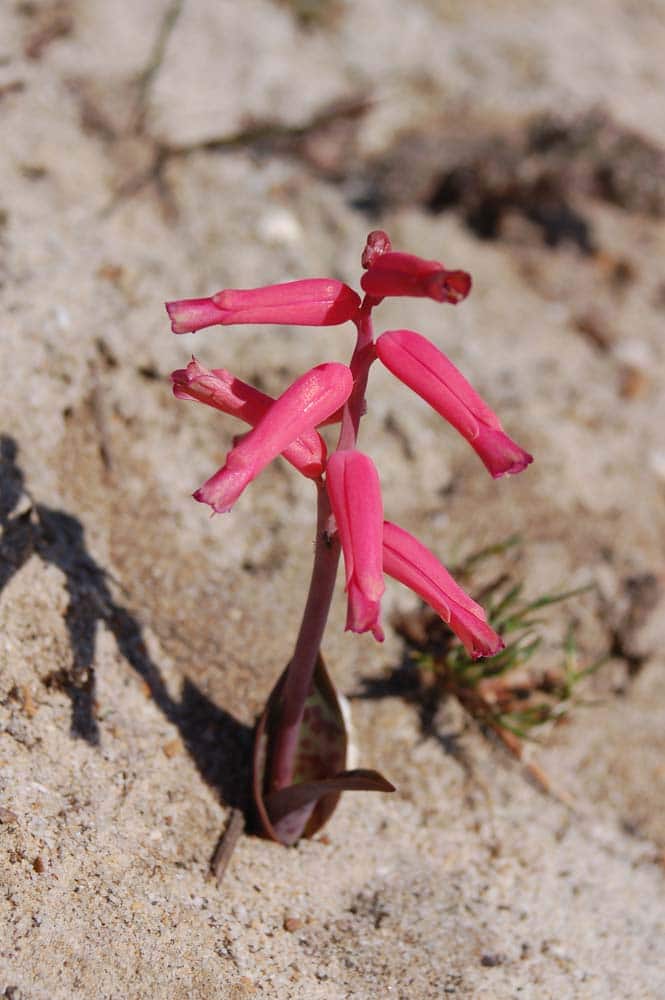 Lachenalia rubida is in the Hyacinth family but is called a red violet in Afrikaans. 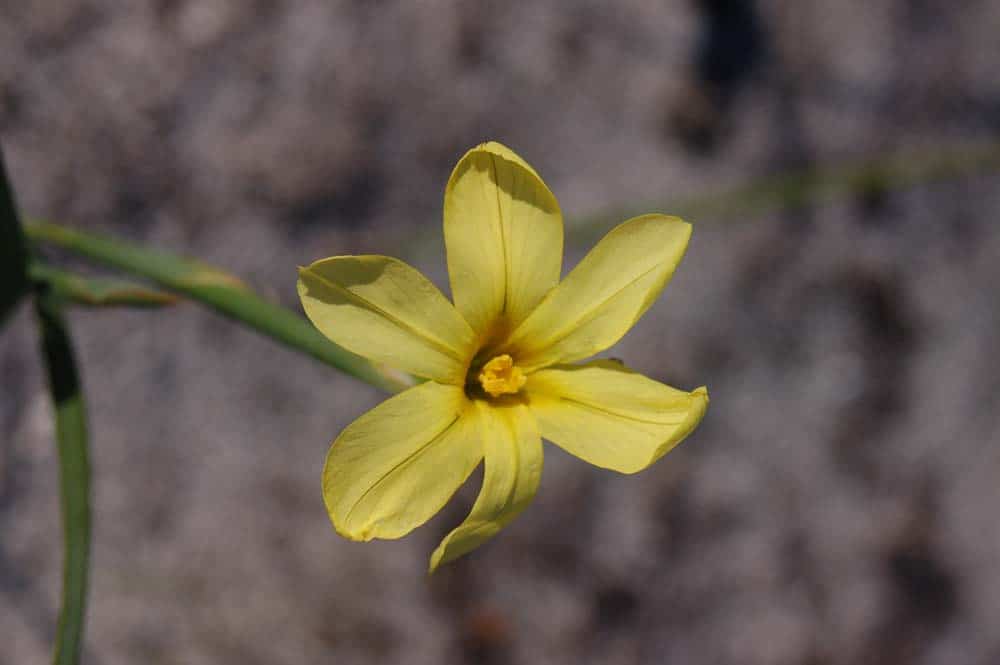 The Moraea is a type of iris – these yellow ones often have a foul smell.

Some areas of Red Hill were saved from the fire by a twist of the landscape. Important refuges of food and shelter for wildlife such as birds and reptiles in the months following a fire, these unburned pockets of fynbos are also perhaps Nature’s way of keeping a little seed in reserve. 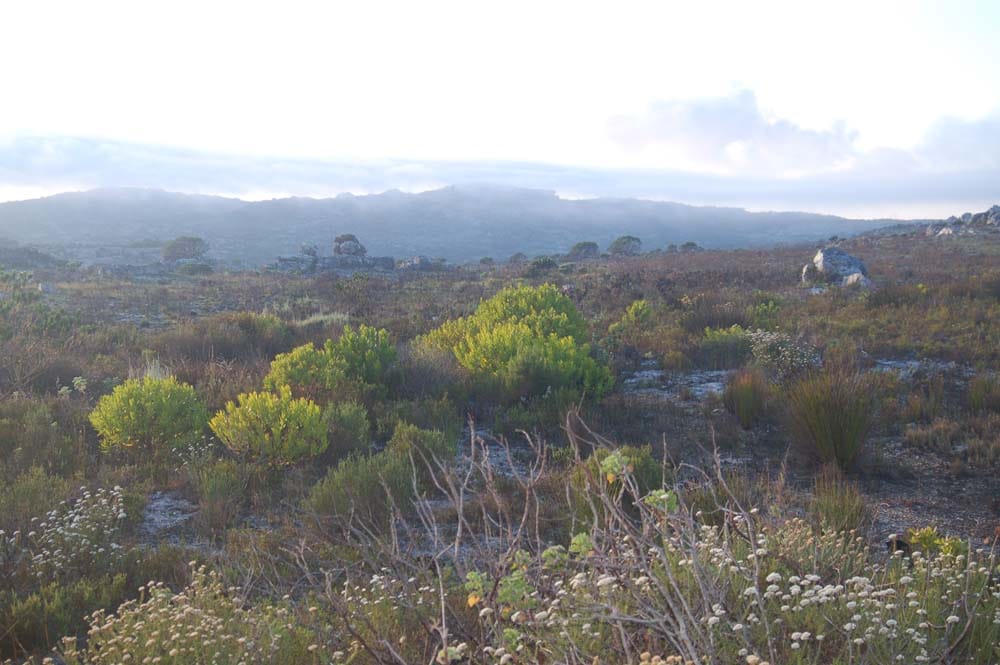 An unburned pocket of fynbos is an important reservoir of seed & animal life after the fire.

And it’s not long before there is food in the post-fire environment. Most obvious are the various species of iris, their tall leaves indicating an underground treat – their bulbs, dug up and eaten by both baboons and porcupines. Speaking of baboons, the Red Hill Mob made an appearance at the reservoir and I followed them for a while through the landscape, watching them rip up young plants and eat their juicy stems and roots. There’s some food in fynbos for baboons but not enough –protein is especially scarce – and so they were making their way to the coast for richer pickings in rock pools, along shorelines and at picnic sites. 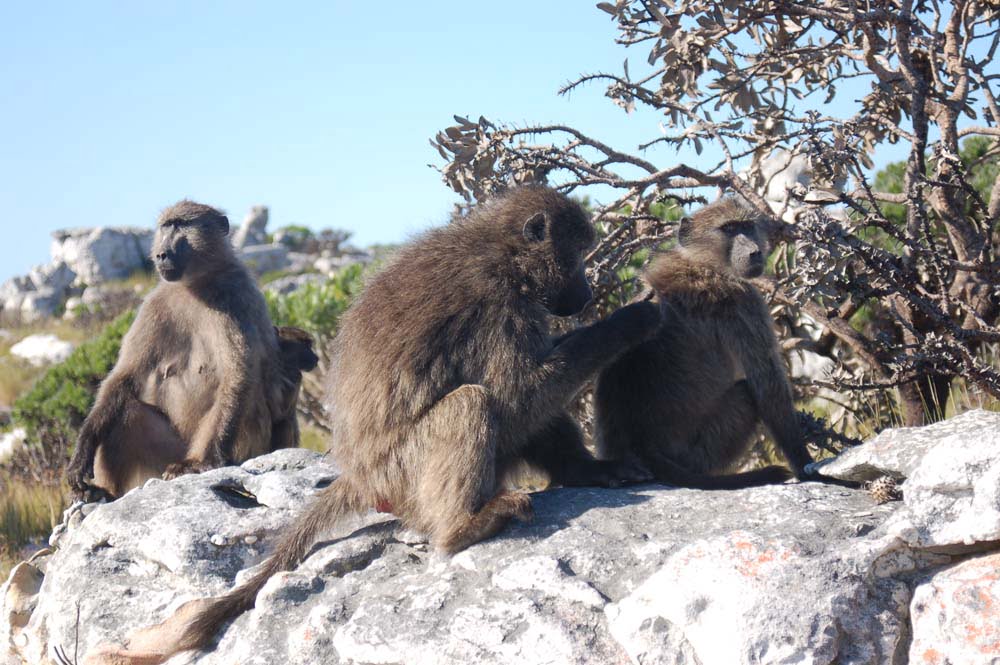 Grooming among baboons reinforces social bonds within the troop.

I spent the morning at Red Hill, entranced by the number of flowers that were already in bloom. It was early winter and there were irises, geraniums and lobelias as well as orchids and hyacinths. And that was after the driest six months on record. Now that the Cape’s winter rains have finally started, it seems Red Hill will be seeing The Fynbos Guy again real soon.