EASY DOES IT: A SHORT FYNBOS WALK 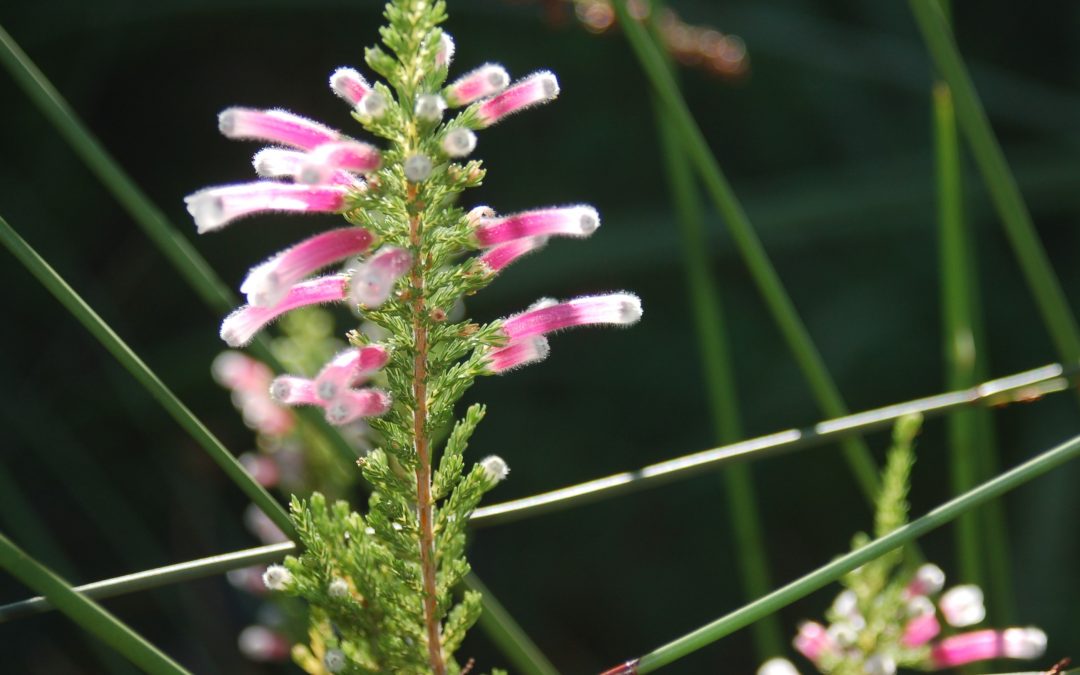 I took a casual stroll through some fynbos the other day. It was a typical Cape Town morning – sunny, warm and breezy – and the air fizzed with the industrious hum of insects moving from flower to flower. Lizards – Cape skinks – scuttled under bushes as I walked, and dragonflies darted in front of me looking for prey kicked up by my boots. 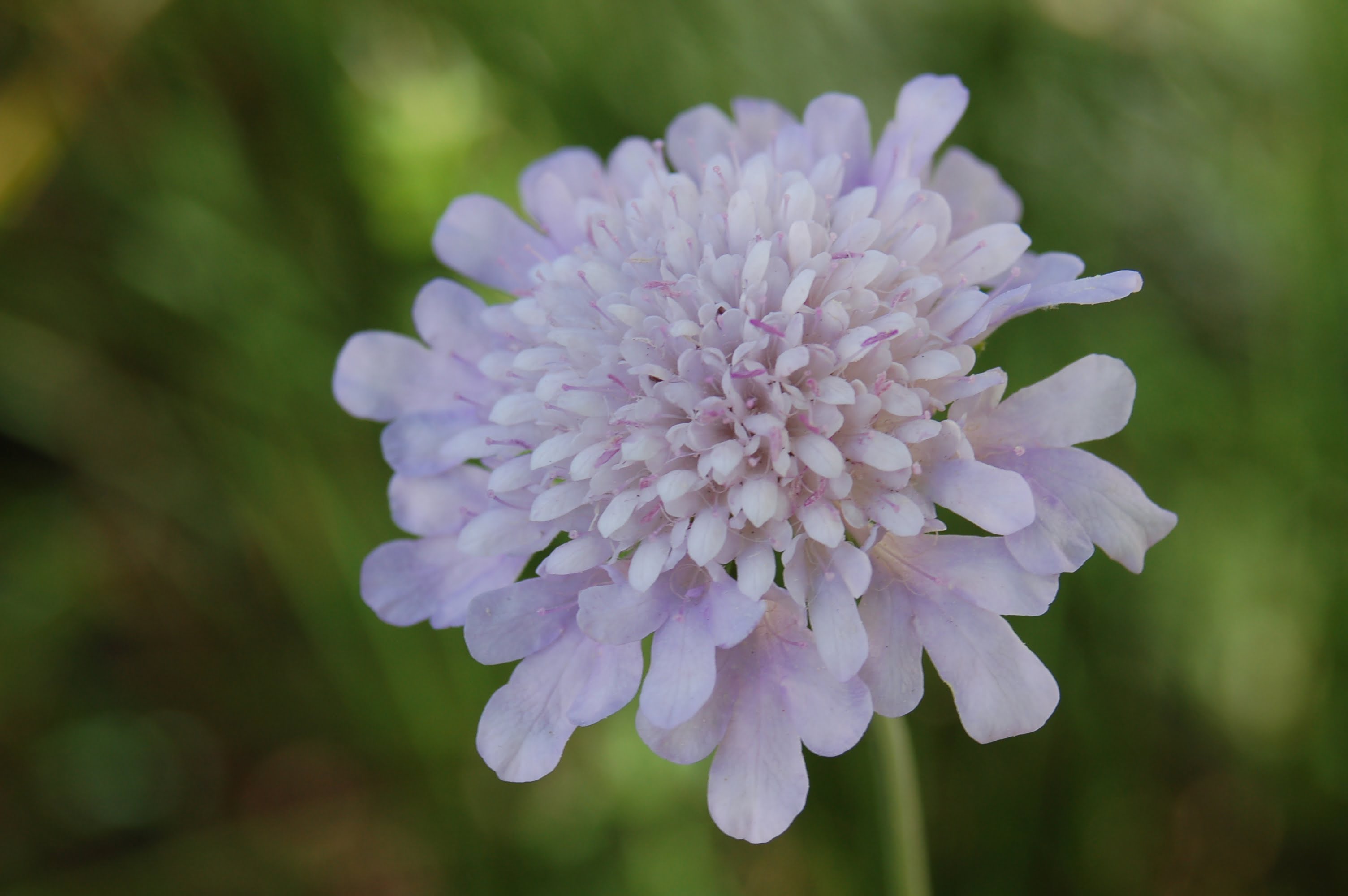 There were some handsome Cape Scabious in flower (Scabiosa africana), a member of a family that includes a European plant once used to treat – as you may have guessed – scabies. But don’t let that put you off: delicately scented, they are endemic to the Cape Peninsula and have long played a part in the southern African pharmacopeia. Their fleshy roots and leaves are a traditional remedy for colic and heartburn and the dried and powdered roots were used as a baby powder. 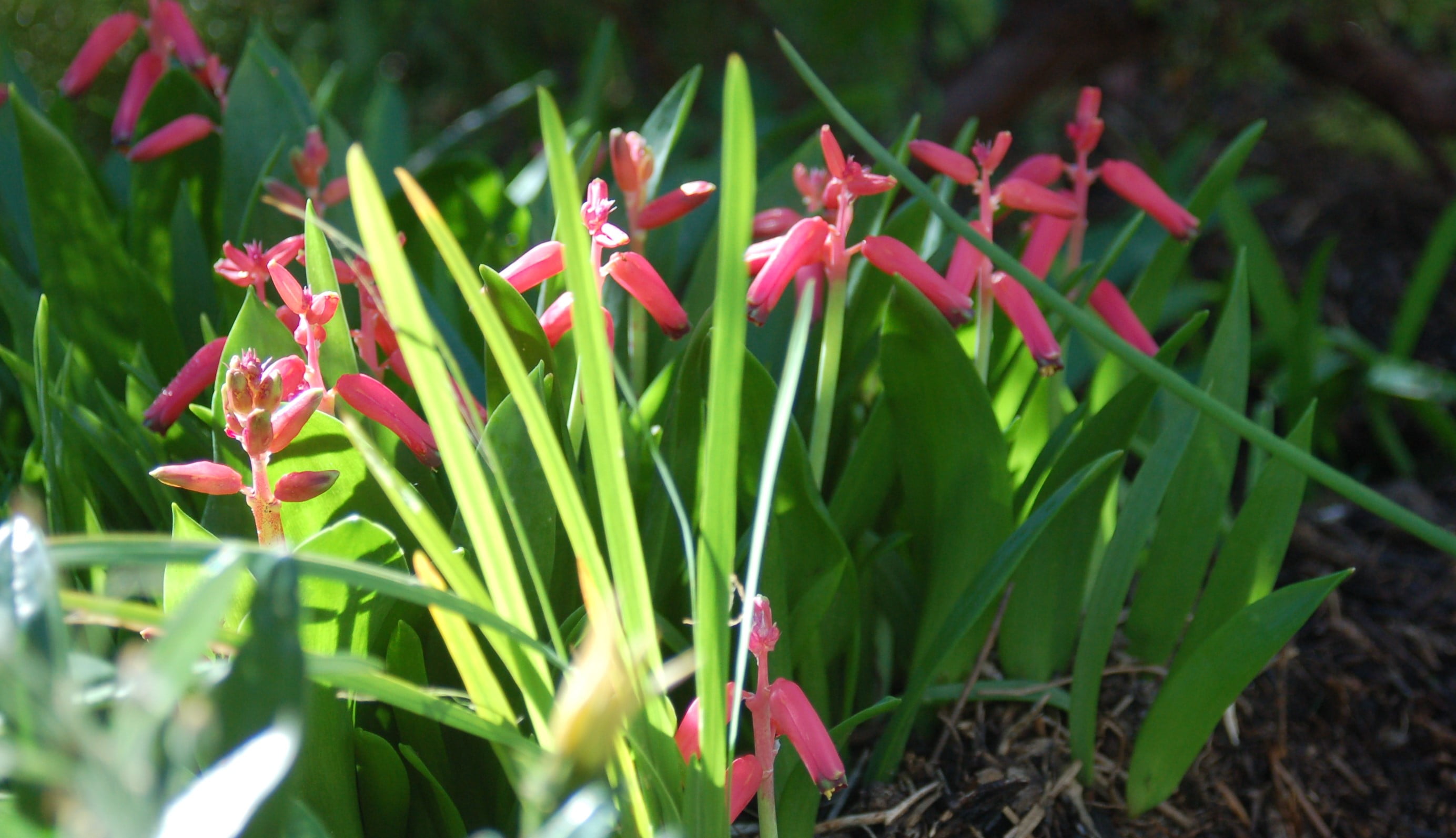 A flash of red caught my eye – as indeed the colour is intended to do. These are Lachenalias, in the Hyacinth family, but their tubular red flowers have evolved not to draw the attention of lumbering primates but instead our hummingbird-like sunbirds, whose thin beaks fit into the flower like a hand into a glove, effecting pollination for a nectar reward. A Lachenalia is called a Viooltjie in Afrikaans – some of you may need help with the pronunciation of that – fee ool key – is about as good as I can get it – and it means ‘little violin’, derived from the fact that some species have stems that squeak out of tune when rubbed together. 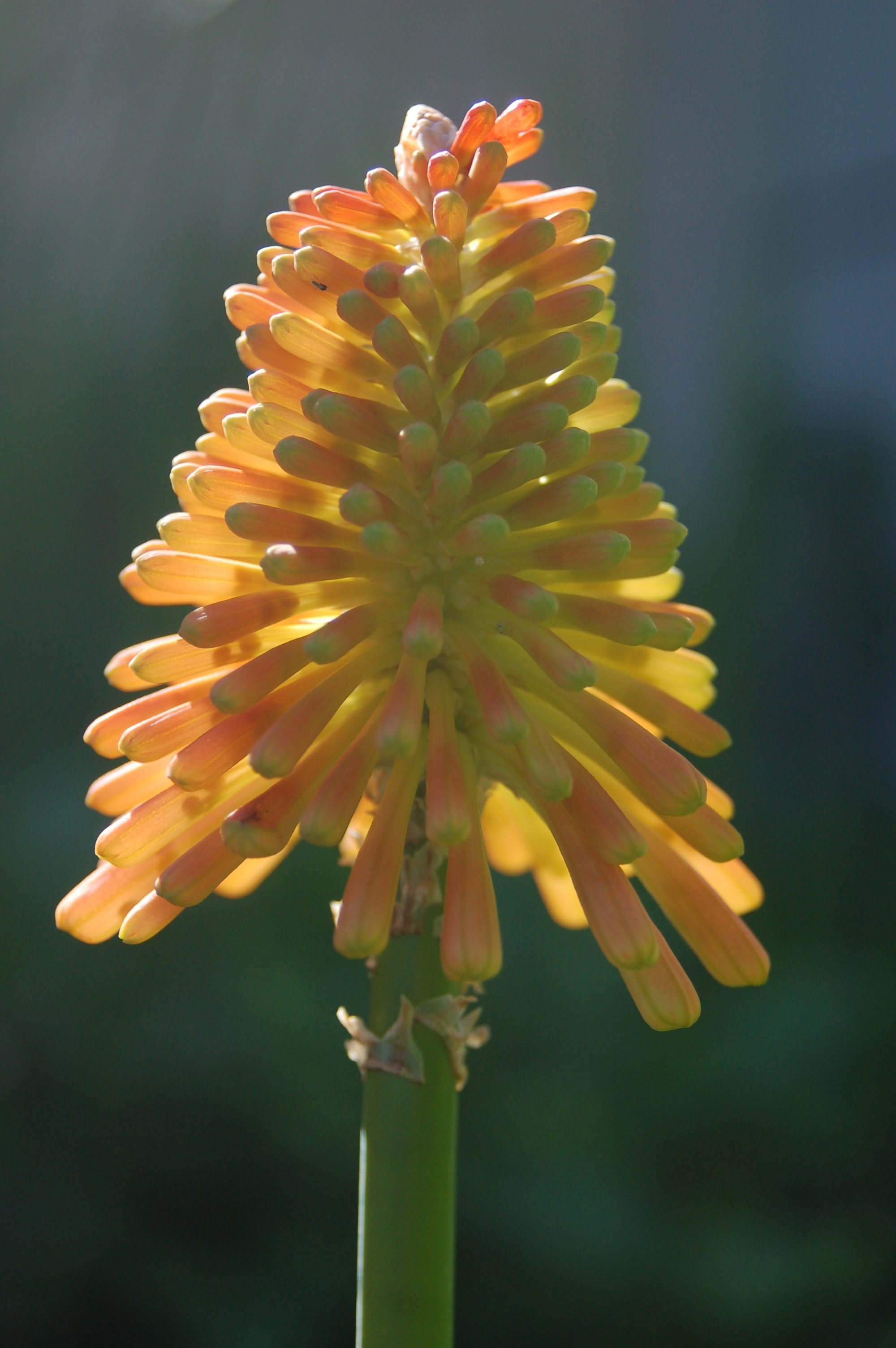 A wetland revealed a familiar member of the Aloe family – a Red Hot Poker (Kniphofia uvaria), back-lit by the early morning sun. Their orange flowers are also designed to attract pollinating sunbirds, and like Lachenalias, they have no scent. Such colours – red, deep orange – are overlooked by insects (which are largely colour-blind) but act as a magnet for birds who see red as we do: something worth checking out. And since birds, (like us) have a poor sense of smell, these bright red and orange flowers don’t bother producing a scent (unlike the sweet-smelling and insect-pollinated Cape Scabious). 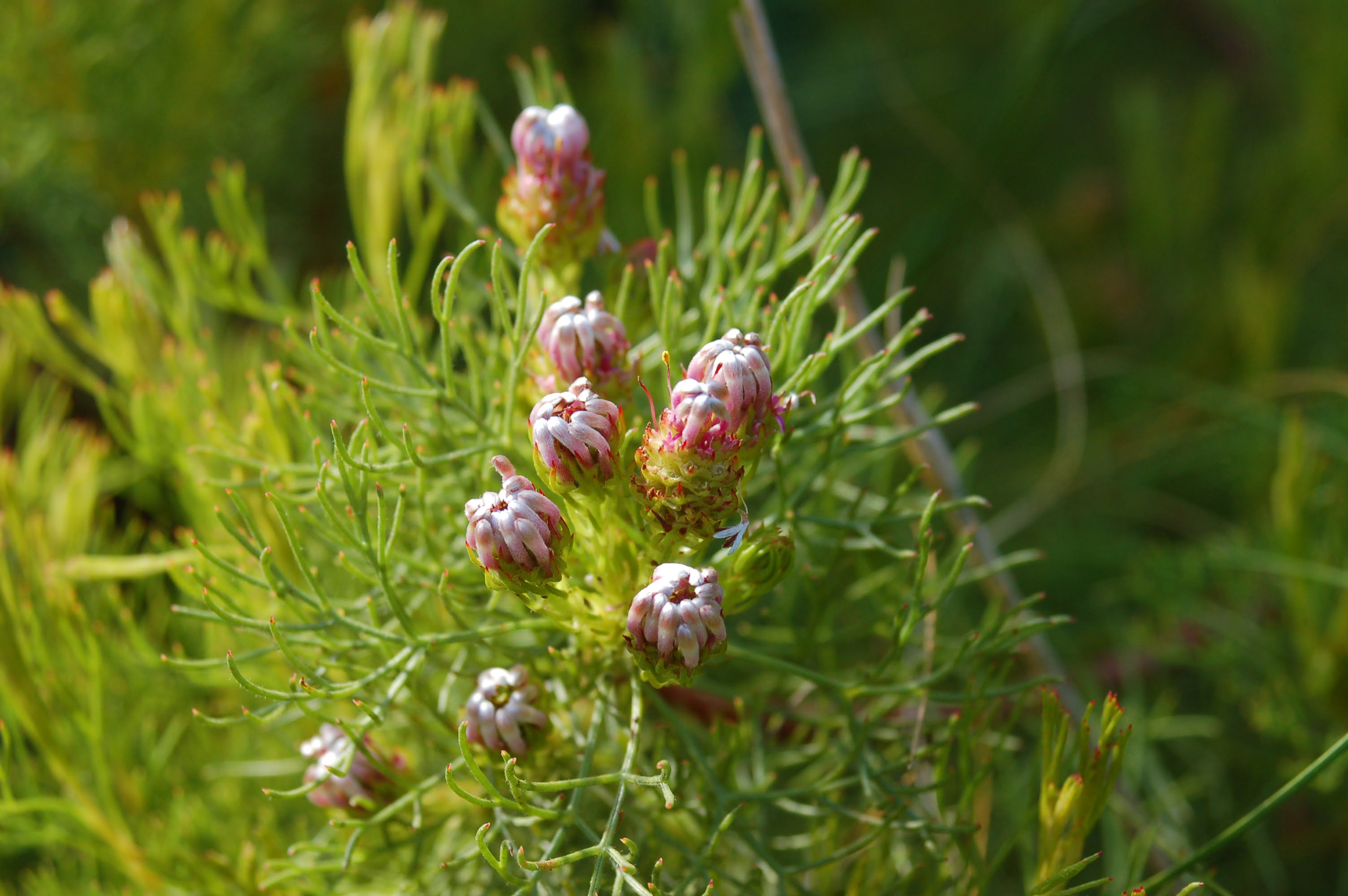 Ah! A rare one, though it belongs to a well-known family. This is a protea, but a different kind to the sort you see as you walk into the lobby of a Cape Town hotel. The Serrurias are known as the Spiderheads – they have finely-divided silky leaves that (with some imagination) leave you with the impression that the plant is covered in spider webs. A little imagination is also needed to believe their method of seed dispersal: Serrurias drop their seeds after flowering where they are harvested by ants, not for the seed itself but a waxy substance attached to the seed called an elaiosome. The ants take the seeds underground to eat the elaiosome but the seed is left intact and now buried safely underground. The next fire generates a heat pulse that triggers the seeds into germination, and next round of Serrurias begin growing. 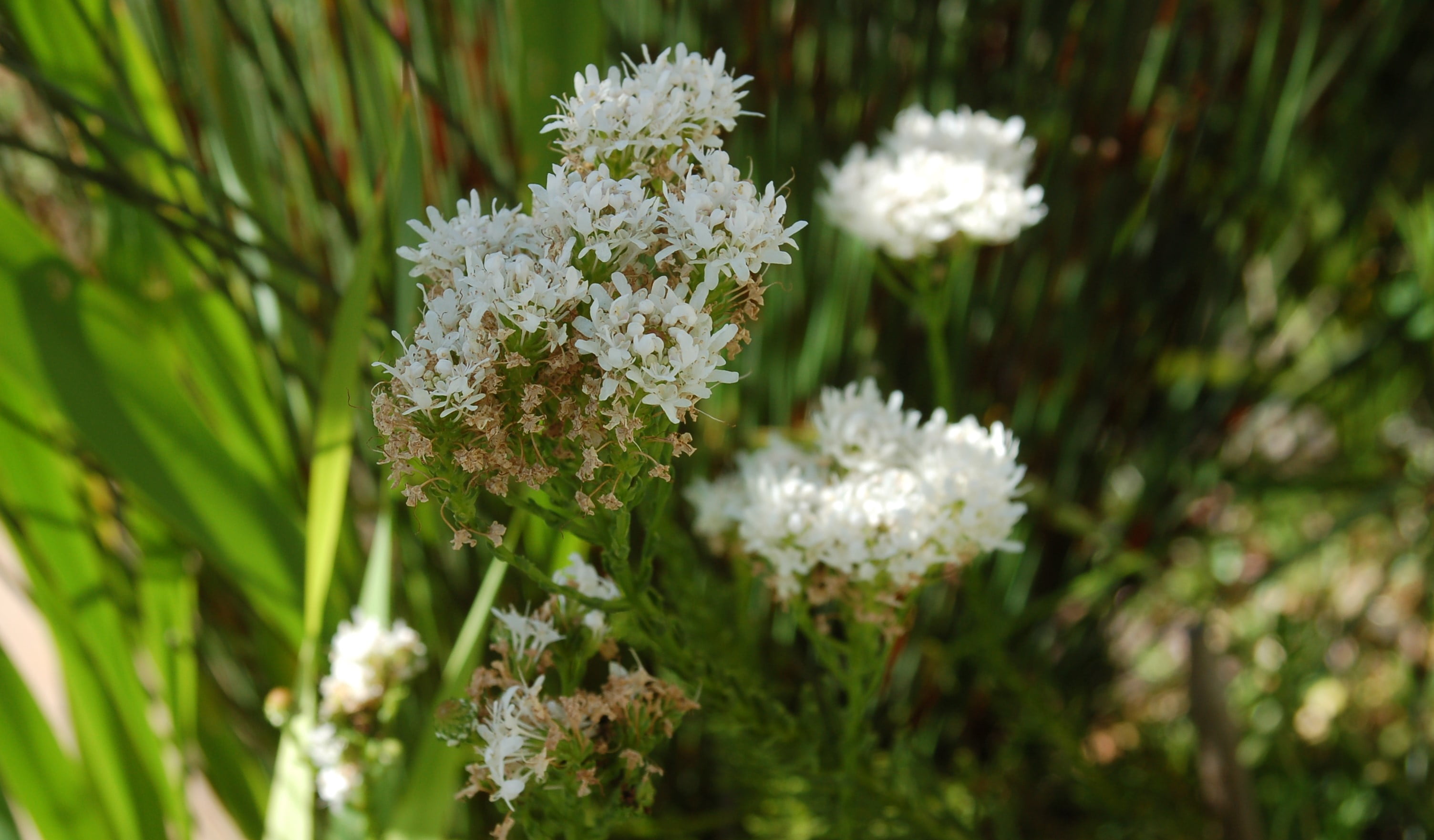 And an even rarer one. Pseduoselago spuria is found in the southwestern Cape but this is the white Cape Flats form, clinging on for survival in a few scattered damp patches around Cape Town – most notably at Milnerton Racecourse of all places. It’s one of the problems with fynbos: its astonishing diversity (there are more plant species on the Cape Peninsula than in the British Isles) means that a plant may be locally abundant – covering the area in front of you – but that may be its entire world distribution. Put in new office space with ample parking and it’s often the end of that species. 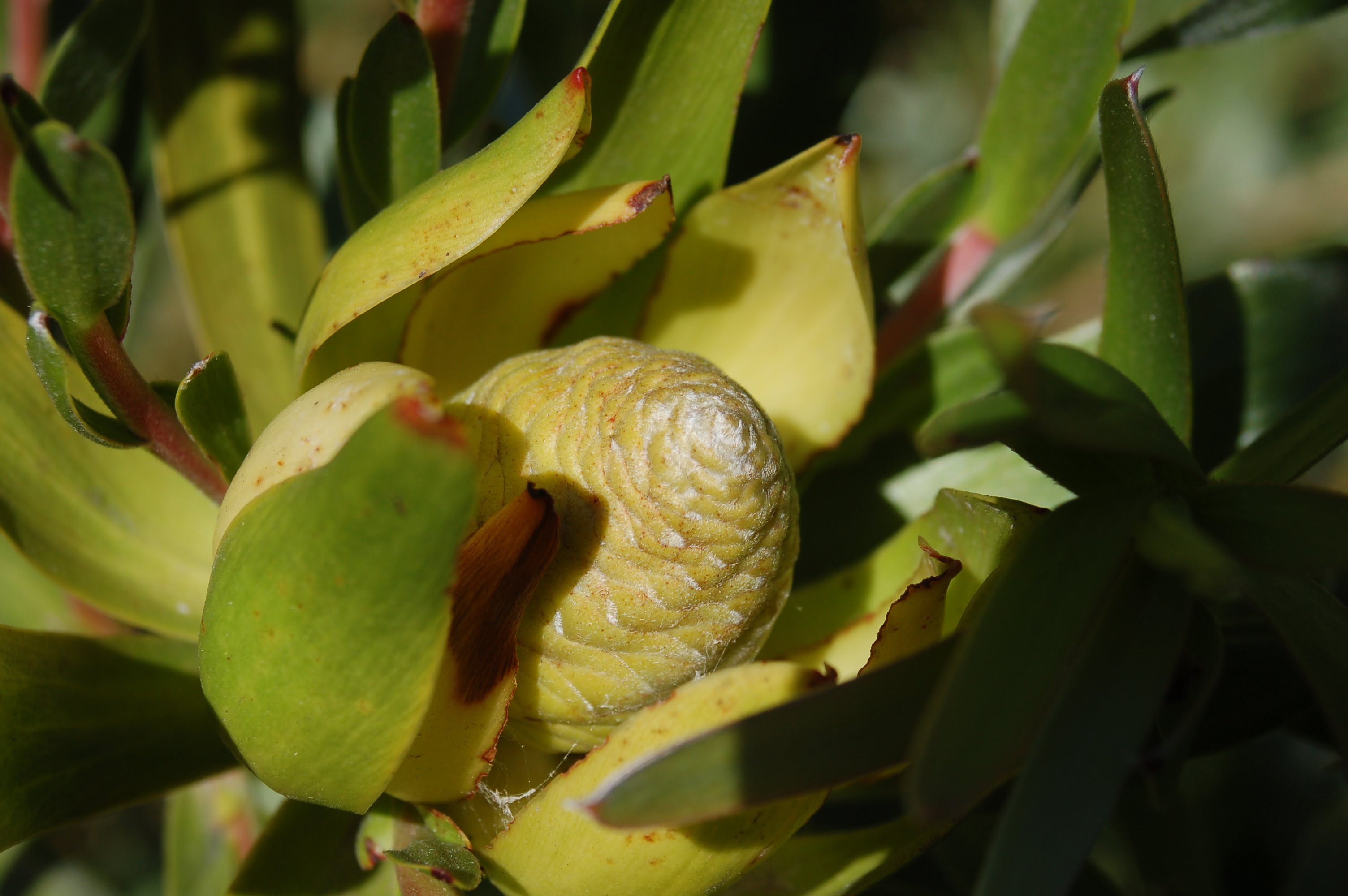 Well-adapted for fire, the Leucadendrons are proteas that fall under the common name of the Cone Bushes. They store their seed in pine tree-like cones (baboons chew them open like a squirrel) which stay dormant on the mother plant for years if not decades. Fire is the mechanism which opens up the cones, stimulating the sleepy seeds into action. Some seeds are designed to come flinging out of the cone almost at once, others wait until a growing root has nudged them out. Either way, they now cover the ground in a rejuvenated, post-fire landscape, free of choking old vegetation and predators. 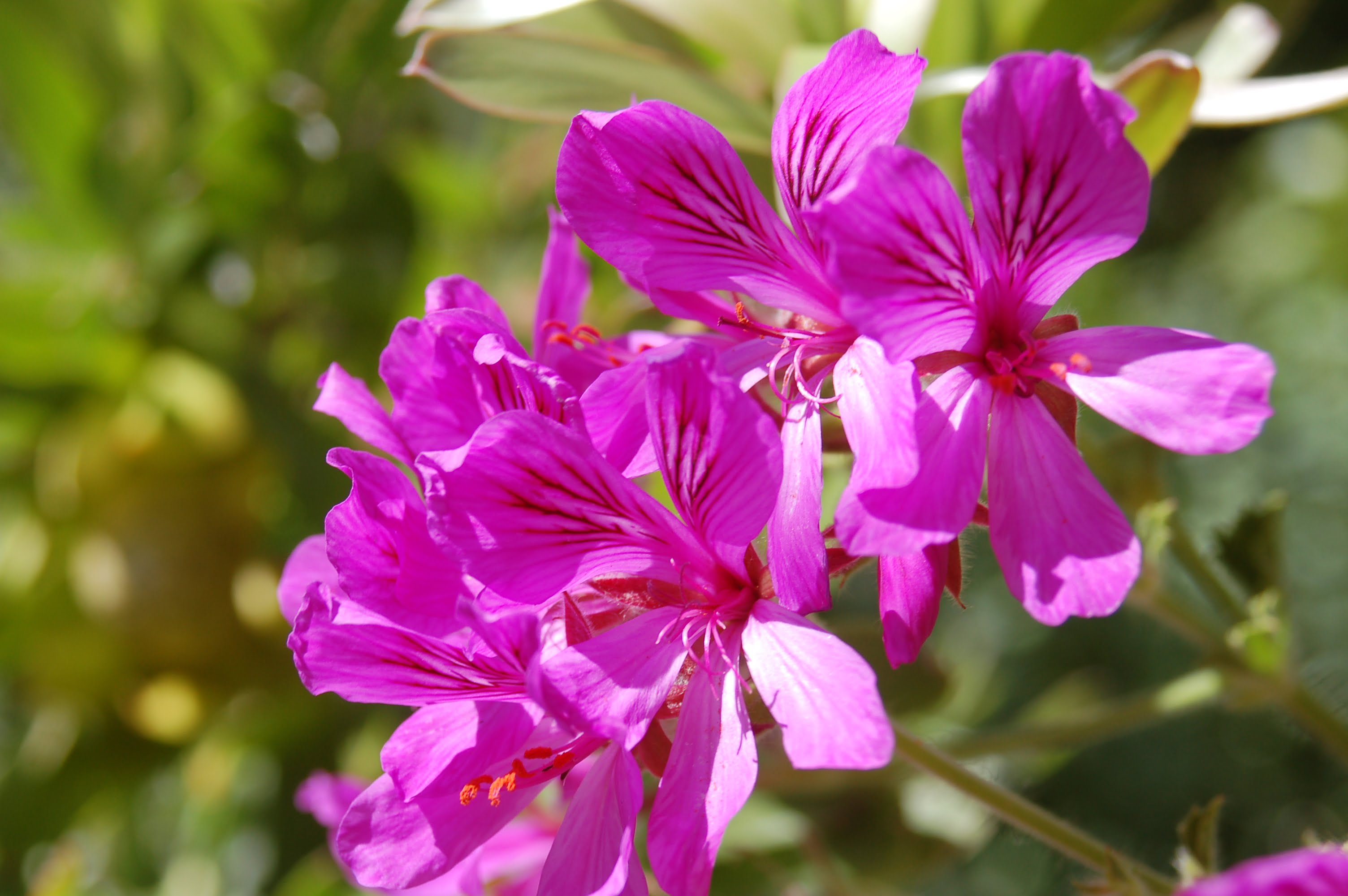 Next time you ladies splash on some perfume, there’s a good chance you have this plant to thank. You can call it a geranium though you’ll get disapproving looks from botanists if you do: it’s Pelargonium cucullatum, one of the 150 or so pelargoniums in fynbos and a plant hybridised to make the commercial varieties from which we extract geranium oil, an important ingredient in the global scent industry. Its leaves were used traditionally to treat chest ailments and coughs.

Something bright yellow stood out in a quiet backwater. It was the flower of a local water lily, the Yellow Floating Heart (Nymphoides thurnbergiana). It was a reminder that the fynbos has a wetland element to it, something Cape Town’s recent water crisis has bought into the spotlight. The city’s water comes from catchment areas in the surrounding mountains, remote, soggy marshlands that slowly release water into our reservoirs. One glass of water in five in South Africa comes off mountains covered in fynbos; if we want water in our taps in the future, we’ll need to keep seeing plants like the Yellow Floating Heart. 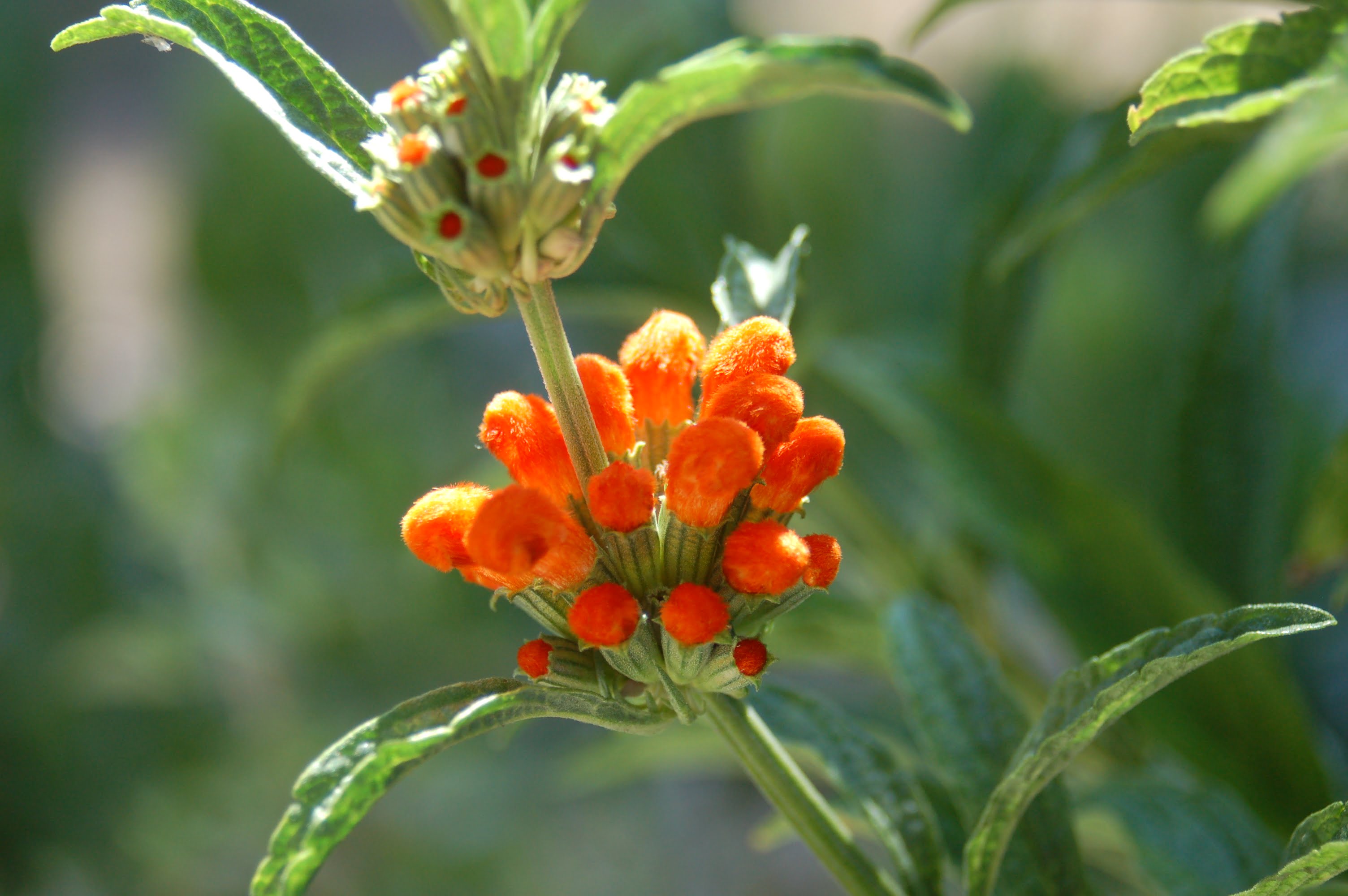 The developing flowers of Wild Dagga (Leonotis leonurus) are unmissable and its name will have caught the attention of some readers. ‘Dagga’ is the local word for marijuana – the double ‘g’ should be pronounced with a bit of throat-clearing – and it is one of the very few Khoisan (Bushman) words to remain in common usage. Despite its acrid smoke, it was smoked as a tobacco substitute (and to treat epilepsy) and produces a feeling of mild intoxication when taken through a water pipe. 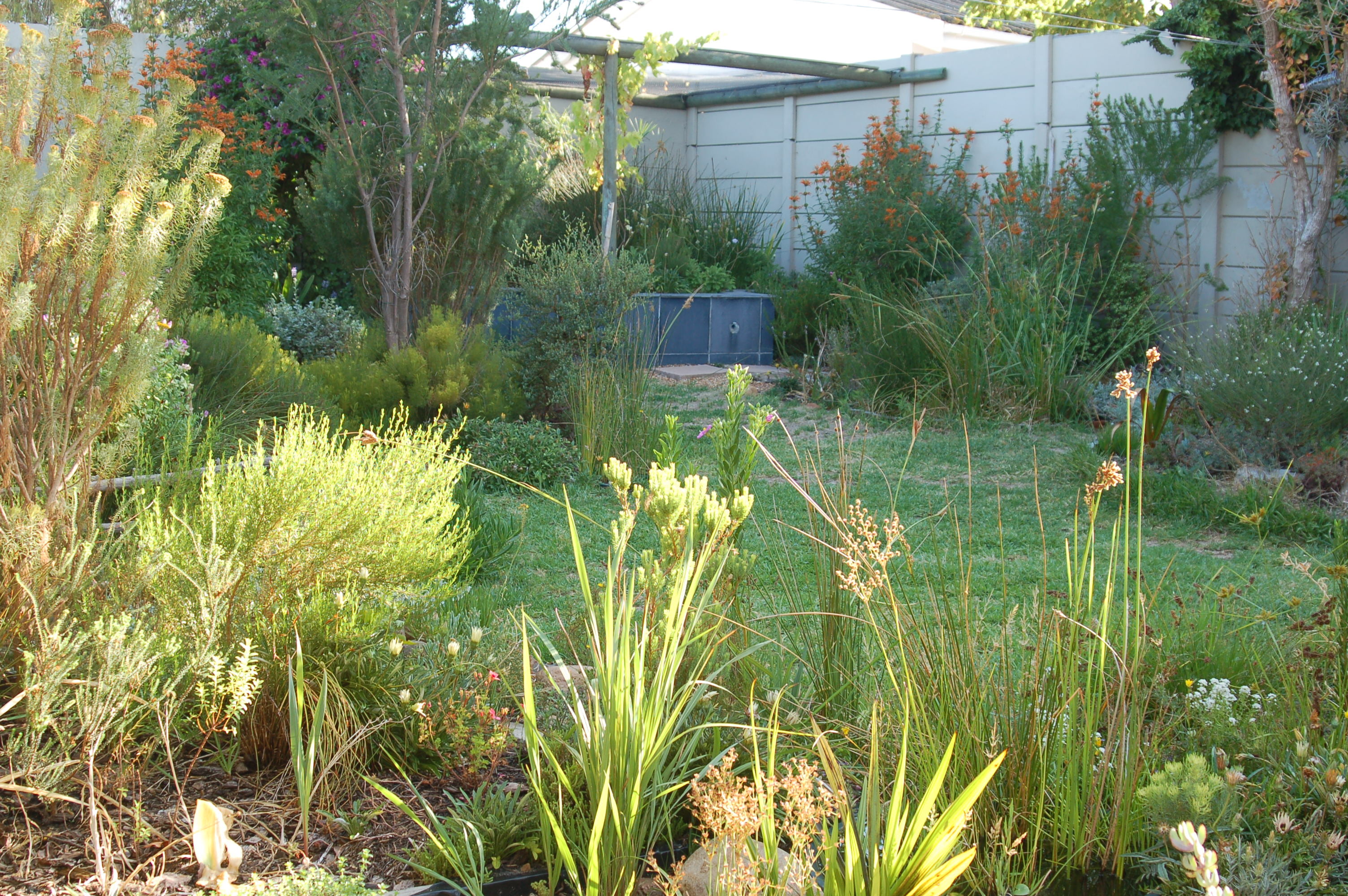 And where is this magical fynbos wonderland? A private reserve tucked away in wild mountains? No! But you have probably guessed already: it’s my garden, 20 minutes from the centre of Cape Town.