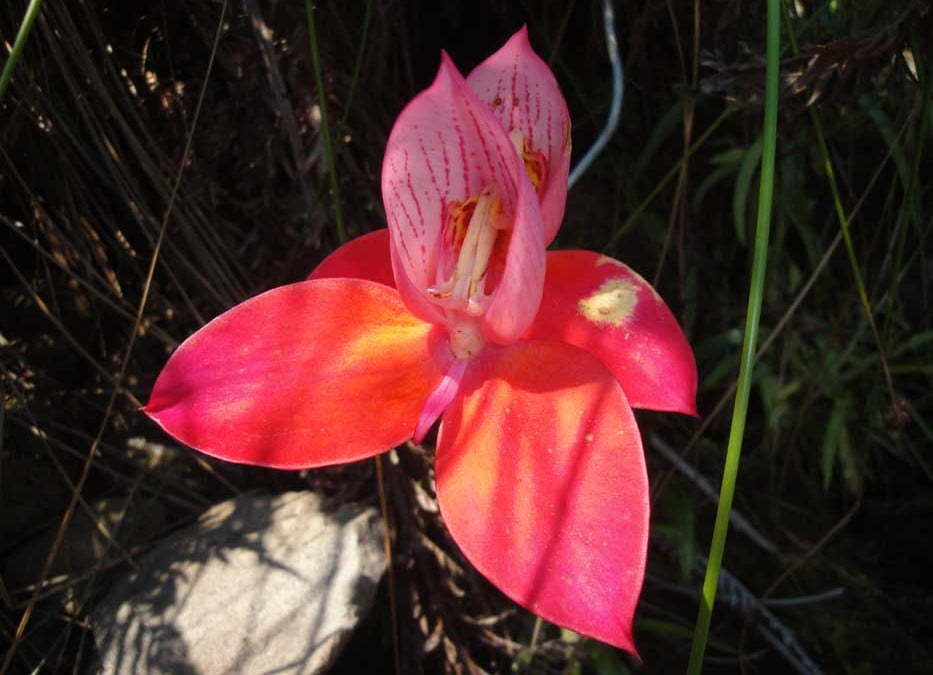 Stroll around Table Mountain on a fine day and it’s hard to believe you are in a tough environment – floral-wise. The views are sensational but it’s windy up there with little shelter or shade. It freezes in winter and roasts in summer – the kind of place ideal for hardy shrubs and stringy reeds: the fynbos.

Even so, you’d think that summer’s scouring winds & blistering heat would keep even the fynbos at bay but take a walk on Table Mountain now and you’ll be in for a floral treat.
At first glance, summer fynbos seems a little drab. But what are those dabs of colour – red and blue – scattered throughout this blasted heath? On closer inspection, they turn out to be … orchids.

Orchids? On Table Mountain? Yes, all over it and loads of them too. In fact, South Africa is home to more orchid species than North America and Europe combined, and a quarter of them are found on the Cape Peninsula. 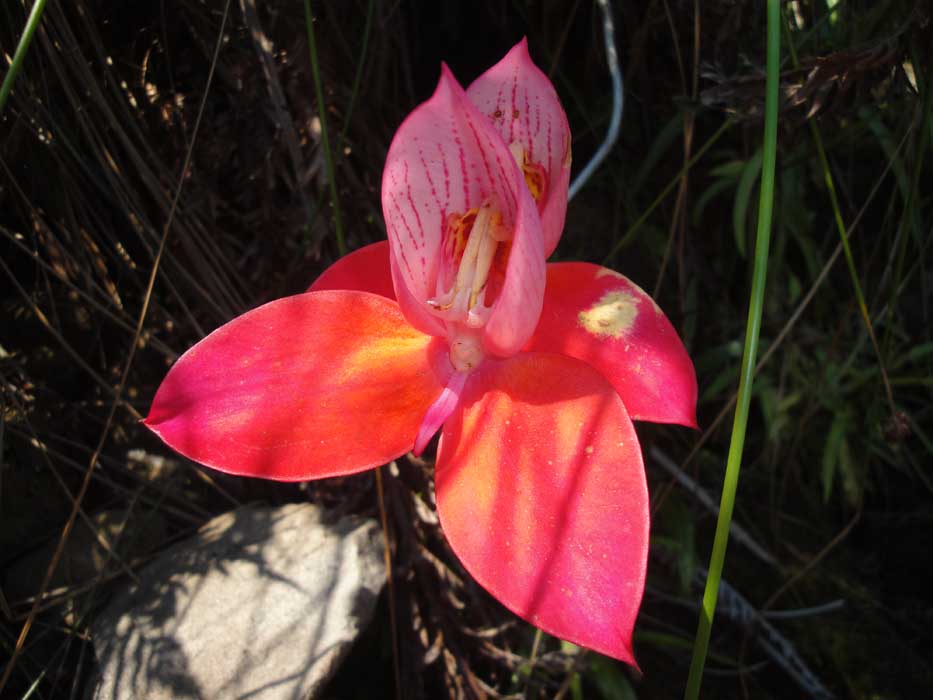 The most famous is the Red Disa (Disa uniflora) – familiar to many locals as the symbol of Western Province Rugby. You’ll find them growing next to streams and on wet mossy walls. Its bright red colour is a reminder that the Pride of Table Mountain Butterfly (Aeropetes tulbaghia) is about, an insect obsessed by red and a vital pollinator for many plants. (It’s the only known pollinator of the Red Disa.) Wear a red cap in high summer and prepared to be dive-bombed.

Other plants get in on the act. On the Table Top in summer you’ll see Erica abietina – Red Heath – in full flower alongside Autumn Painted Ladies (Gladiolus debilis), their nectar – and pollen – positioned at the end of a pink landing strip marked with red ‘arrows’. 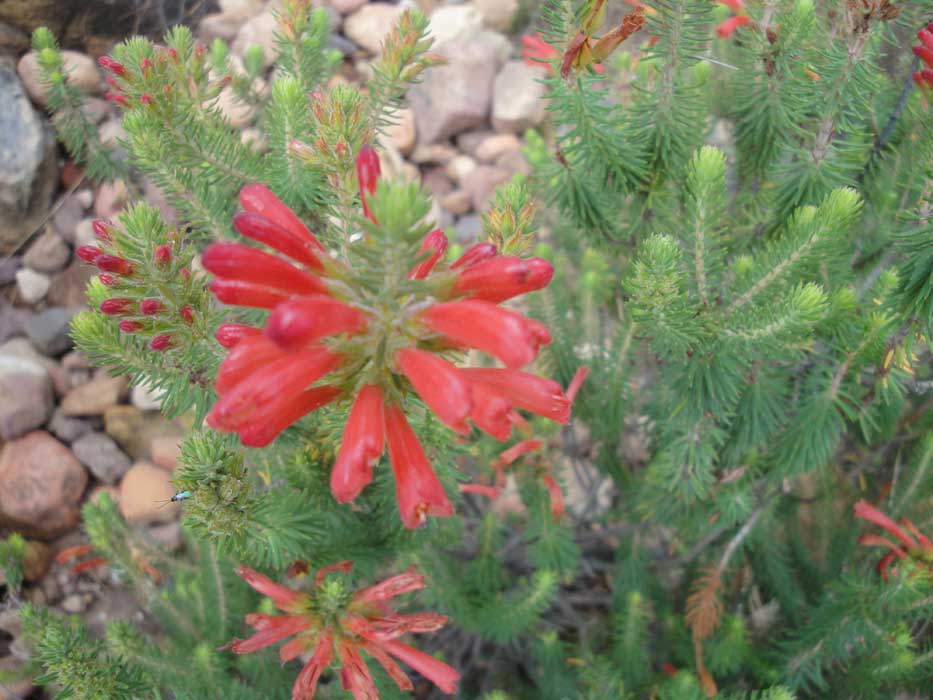 Red Heath, just one of 100 Erica (Heather) species on the Cape Peninsula; Europe has a total of 20 Heather species. 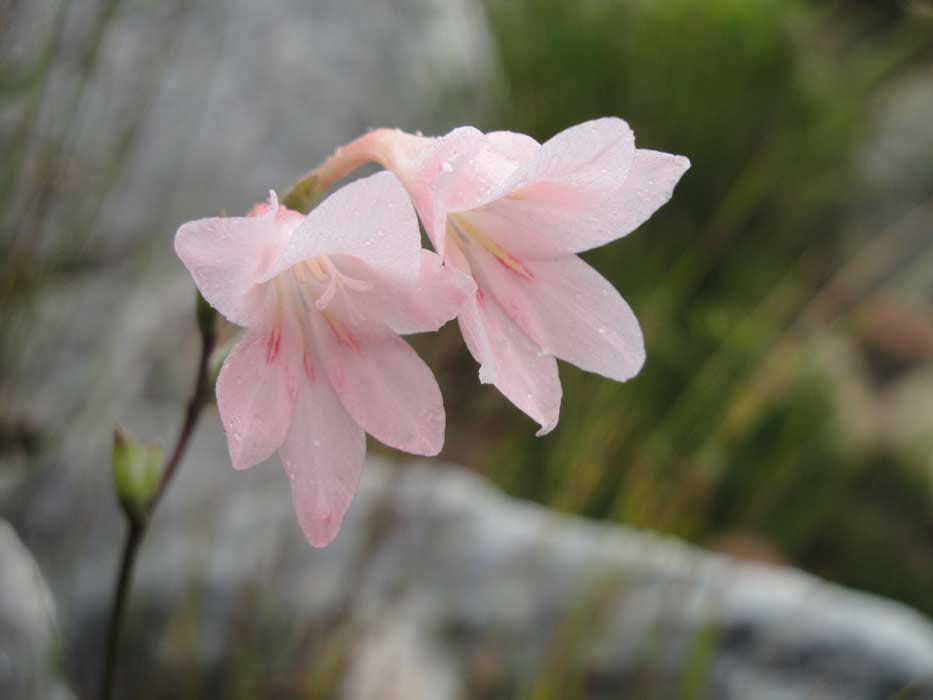 Also attracting the attention of the butterfly is Tritoniopsis triticea, an iris rich with nectar. But look a little more closely at some of those irises … some of them look a little odd, and they turn out to be another orchid, a Cluster Disa (Disa ferruginea). This wily plant impersonates the iris, duping the hopelessly-addicted Pride of Table Mountain Butterfly. For the butterfly however, the orchid has no nectar reward – a high risk but energy-saving pollination strategy. 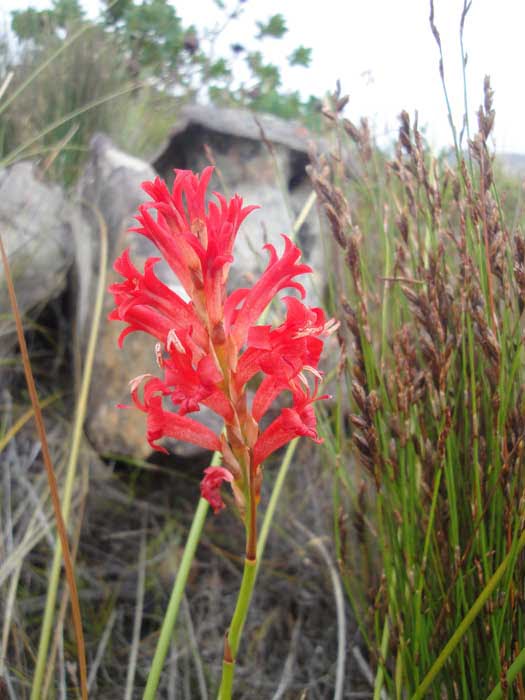 This iris has a tasty nectar reward for its pollinator, the Pride of Table Mountain Butterfly. 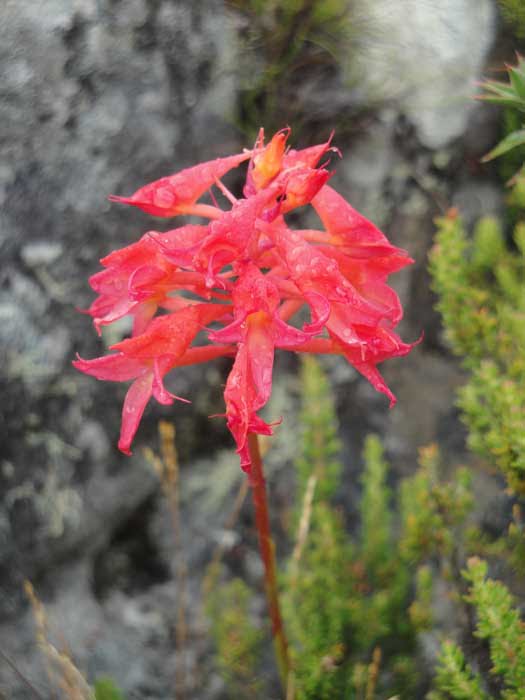 This orchid however, cunningly disguised as the iris, has no nectar reward.

And then suddenly a flash of impossible blue stands out in the dry reeds. And the strangest-looking flower appears – hooded, daubed with lime green and sporting extravagant side petals; it can only be the Blue Disa (Disa graminifolia). Its wide opening accommodates tubby carpenter bees, but once again you’re looking at the less-generous side of nature. This sugar-free orchid is another impersonator, luring the bees into thinking it is one of summer’s nectar-bearing blue flowers such as Agapanthus or Cape Scabious (Scabiosa Africana). No-one said Nature had to have good manners. 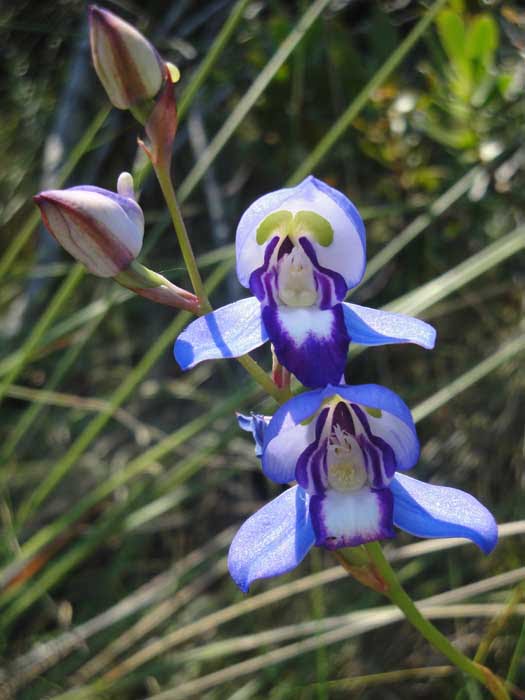 The Blue Disa advertises itself enthusiastically but has no nectar reward for its pollinators.

Most of these flowers and several others can be seen on Table Mountain at the moment; Watsonia tabularis comes in lovely salmon pink and the bright orange flowers of the Water Heath – Erica curviflora light up the mountain’s wetlands. And everywhere swifts and swallows dart through in the summer sky, picking off flying insects with audible snaps of the beak. White-necked ravens patrol the cliff faces and the occasional buzzard drifts overhead – summer on Table Mountain. 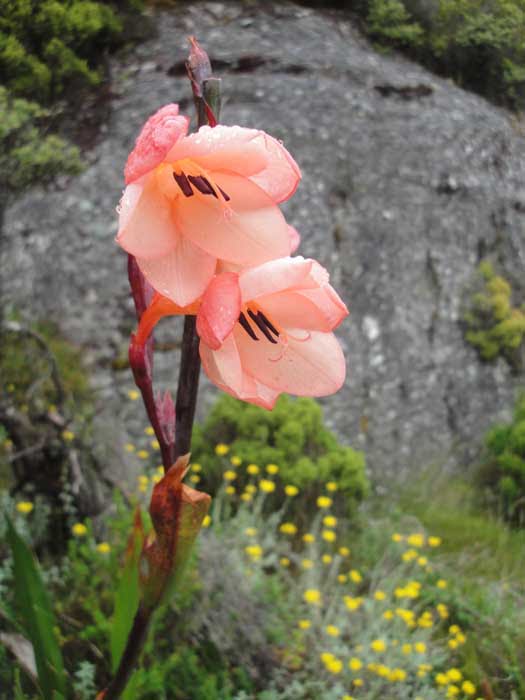 Watsonia tabularis, a type of iris, is only found on the Cape Peninsula. 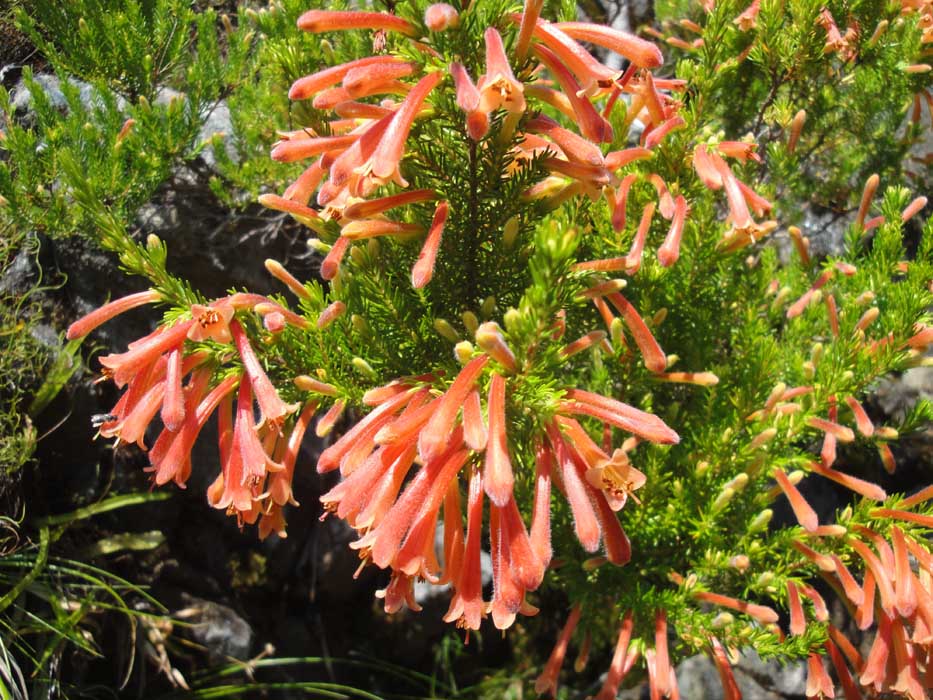 Water Heath likes to grow as its name suggests – right in the middle of a wetland!