Table Mountain Wildlife – As It Once Was 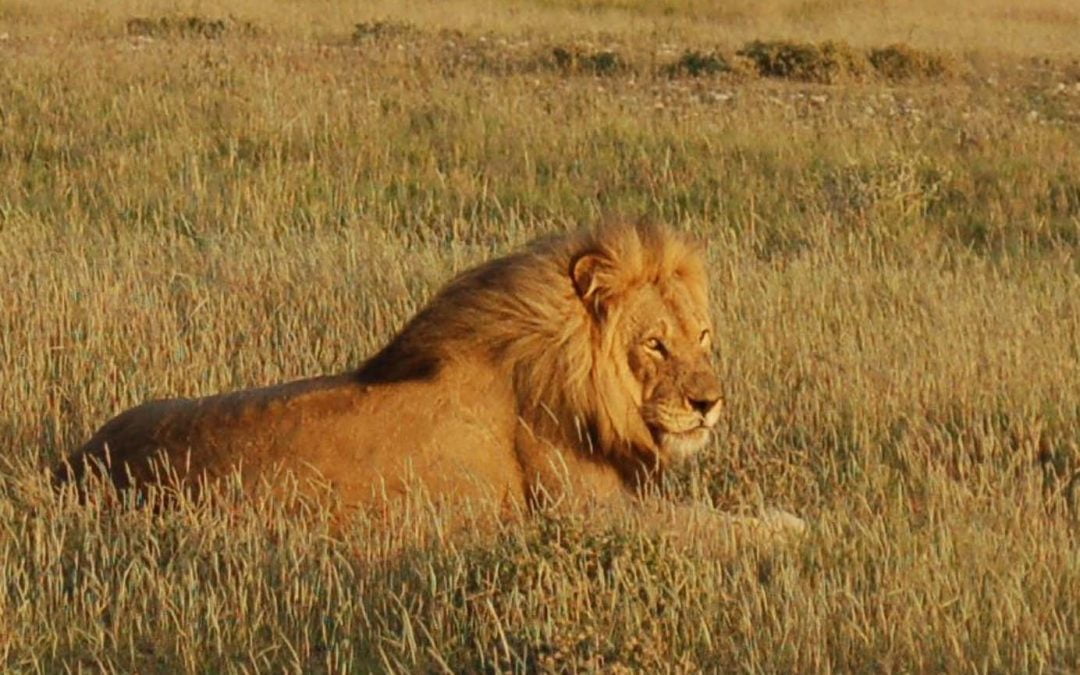 The year is 1553. You are in the foothills of Table Mountain. Forget the happy hum of a modern city; there’s not a building in sight and that’s lion spoor in the sand at your feet. And the sudden crashing of undergrowth nearby could signal the approach of any one of a number of large and dangerous animals: an elephant, hippopotamus or a rhinoceros.

Nearly all the wildlife you associate with the Kruger Park or Botswana or Kenya once lived in the shadow of Table Mountain. Packs of wild dogs used to chase antelope across the Cape Flats – where the airport is today; hippos waddled through wetlands close to the coast at Muizenberg – where Cape Town learns to surf; and spotted hyenas scavenged left-over lion kills on Camps Bay beach, now the city’s most desirable ocean-front address. Some of Africa’s biggest antelope – eland and red hartebeest – grazed on the slopes of Table Mountain and there were troops of over 100 baboons on the mountain itself, hunted by leopards, their carcases picked over by vultures. 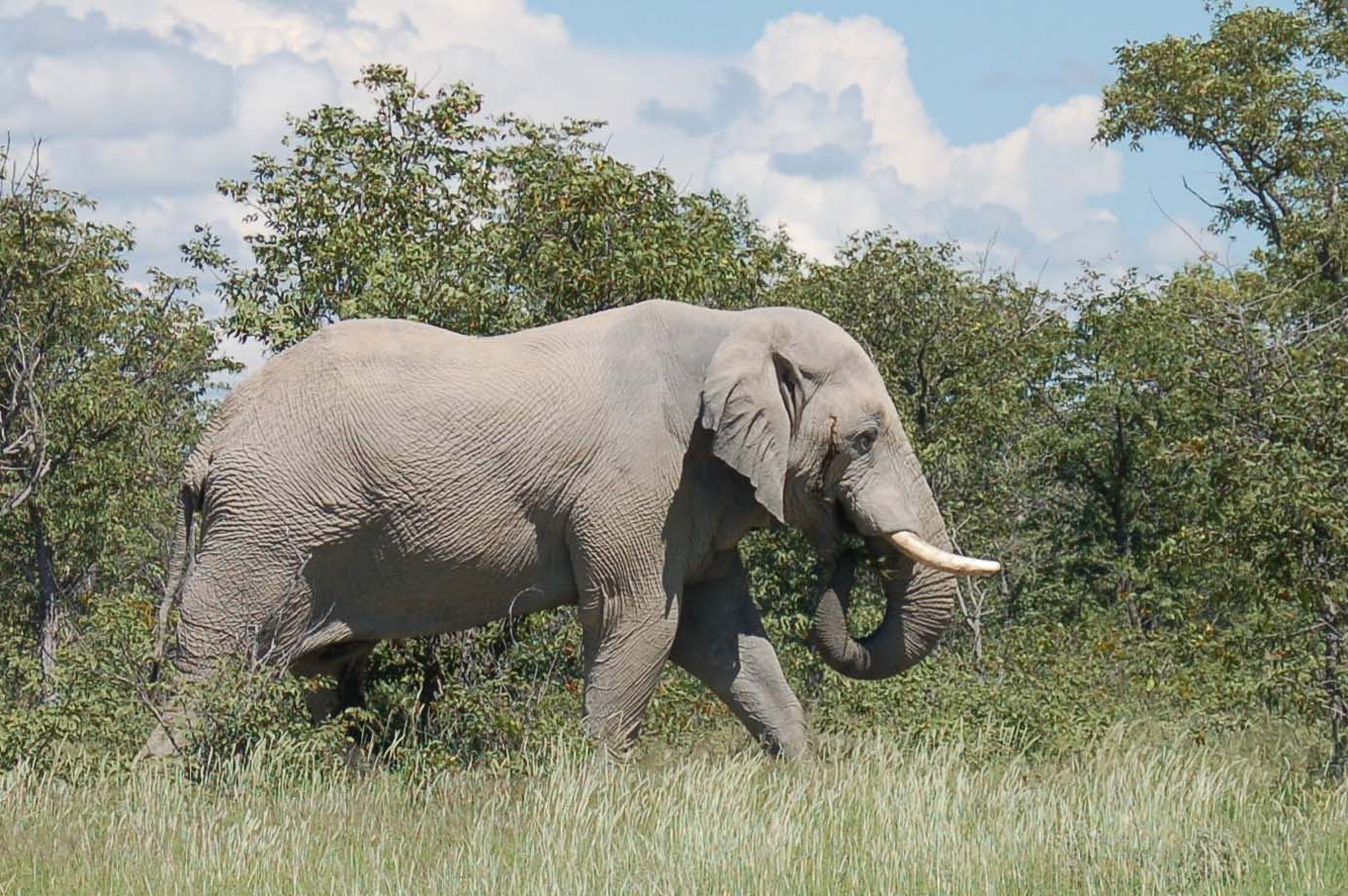 Elephants occasionally wandered onto the Cape Flats, home now to the bulk of Cape Town’s population.

Okay, so not all these animals lived on Table Mountain. Steep, fire-prone and with only unpalatable shrubs to eat (there are no grasses in fynbos) the mountain is a tough place for wildlife to make a living in. But many animals did and still do today – smaller antelope like klipspringer as well as porcupines and the caracal (a lynx-like cat) – and their numbers were far greater than the fleeting glimpse of them nowadays would suggest. Early European explorers recorded terrifying nights while camped on top of Table Mountain, their tents circled by ‘tigers and wolves’ (leopards and hyenas). 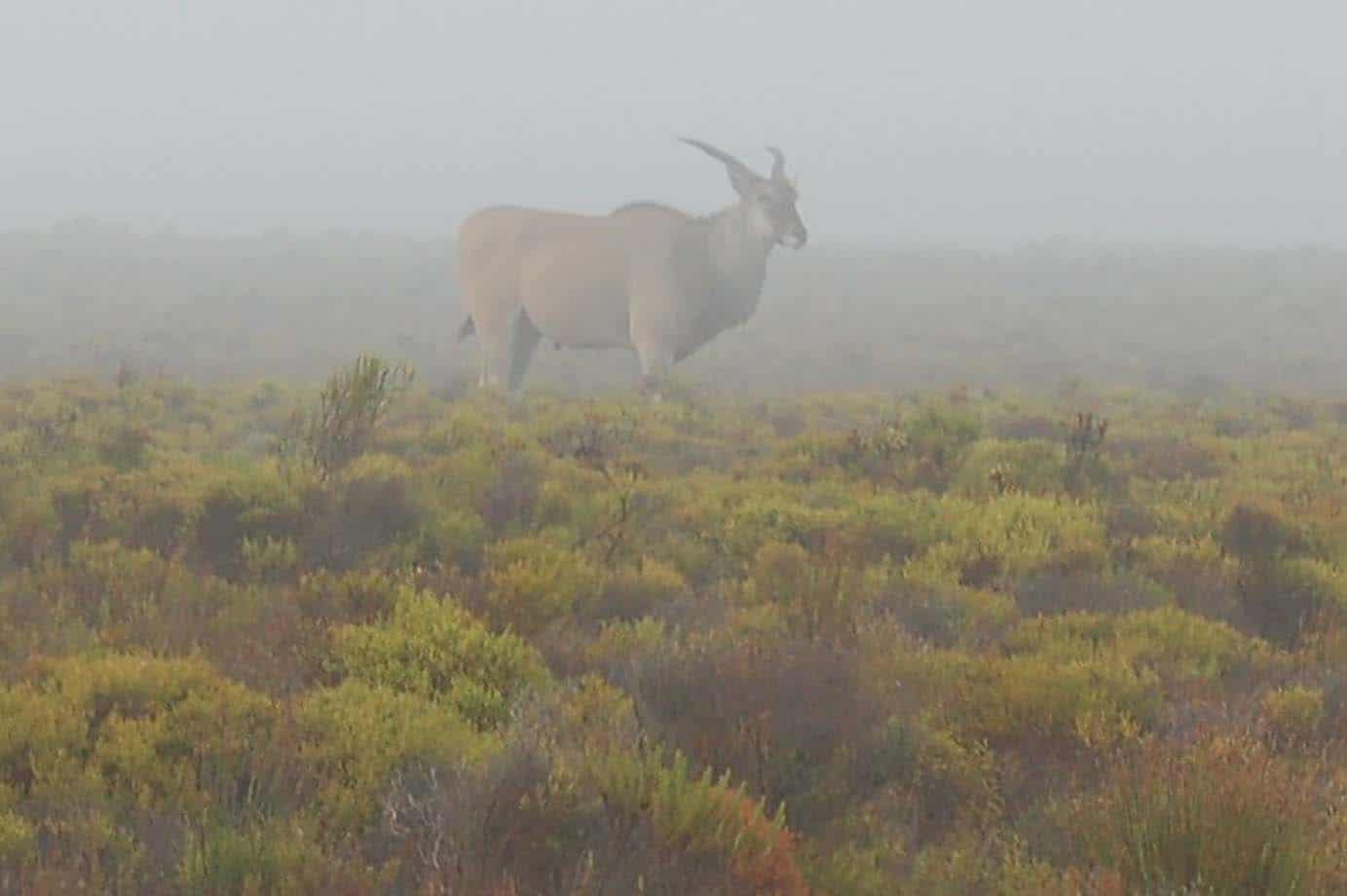 Eland were among the most common antelope in the area & still live in the Cape of Good Hope Reserve.

What happened to such a rich mega-fauna? I think you can guess. Such environments rarely survive the onslaught of colonising hungry humans. Of course, the indigenous Khoisan had hunted and trapped animals for food and skins for thousands of years before but with the arrival of Europeans and modern firepower – one hunter turned up in the 1830s with 18 000 bullets – the carnage was almost total.
Bounties were set for ‘problem animals’ – six pounds and five shillings was paid for a lion shot between Table Mountain and Tygerberg, just north of the city – and hippo meat was available for sale at butcheries (half the price of eland or wild boar and a quarter that of beef in case you were wondering). Ever been to the Roudhouse Restaurant overlooking Camps Bay? That used to be a hunting lodge. 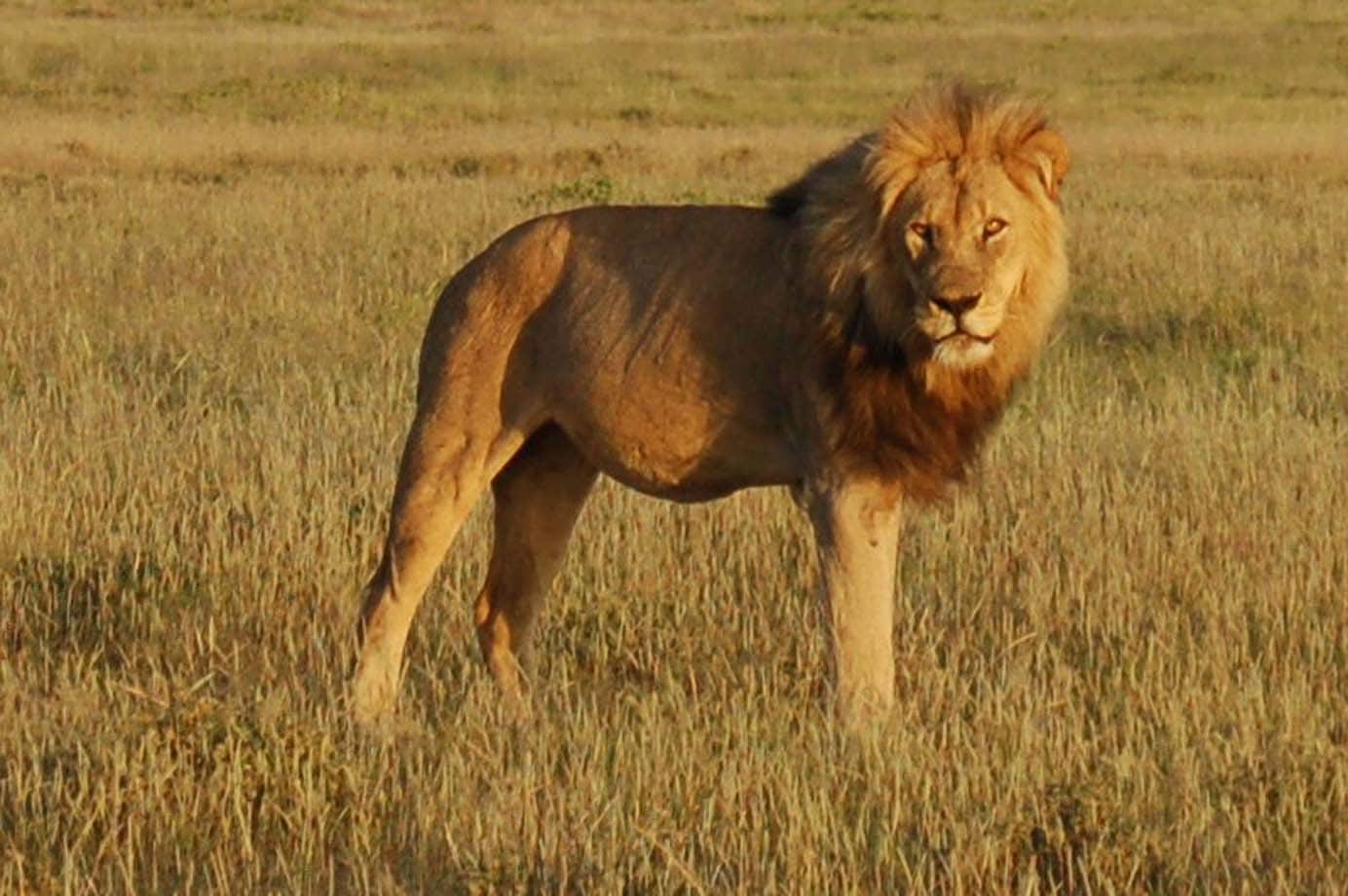 Lions once roamed the slopes of Table Mountain & raided the Dutch camps, forcing the settlers to locate their sheep on Robben Island.

There were animals we later generations never got to see. The Cape mountain zebra is still around – just – but its cousin – a half-striped zebra called the Kwagga – was gone by the turn of the 20th century. This animal’s whistling call “kwagga kwagga” used to ring out over what are now the wheat fields and vineyards of the Cape Winelands but were once teeming grasslands. Also vanished forever is the Blue antelope, similar in appearance to the handsome Sable antelope with swept-back horns and a haughty demeanour – shot out of existence by 1800. 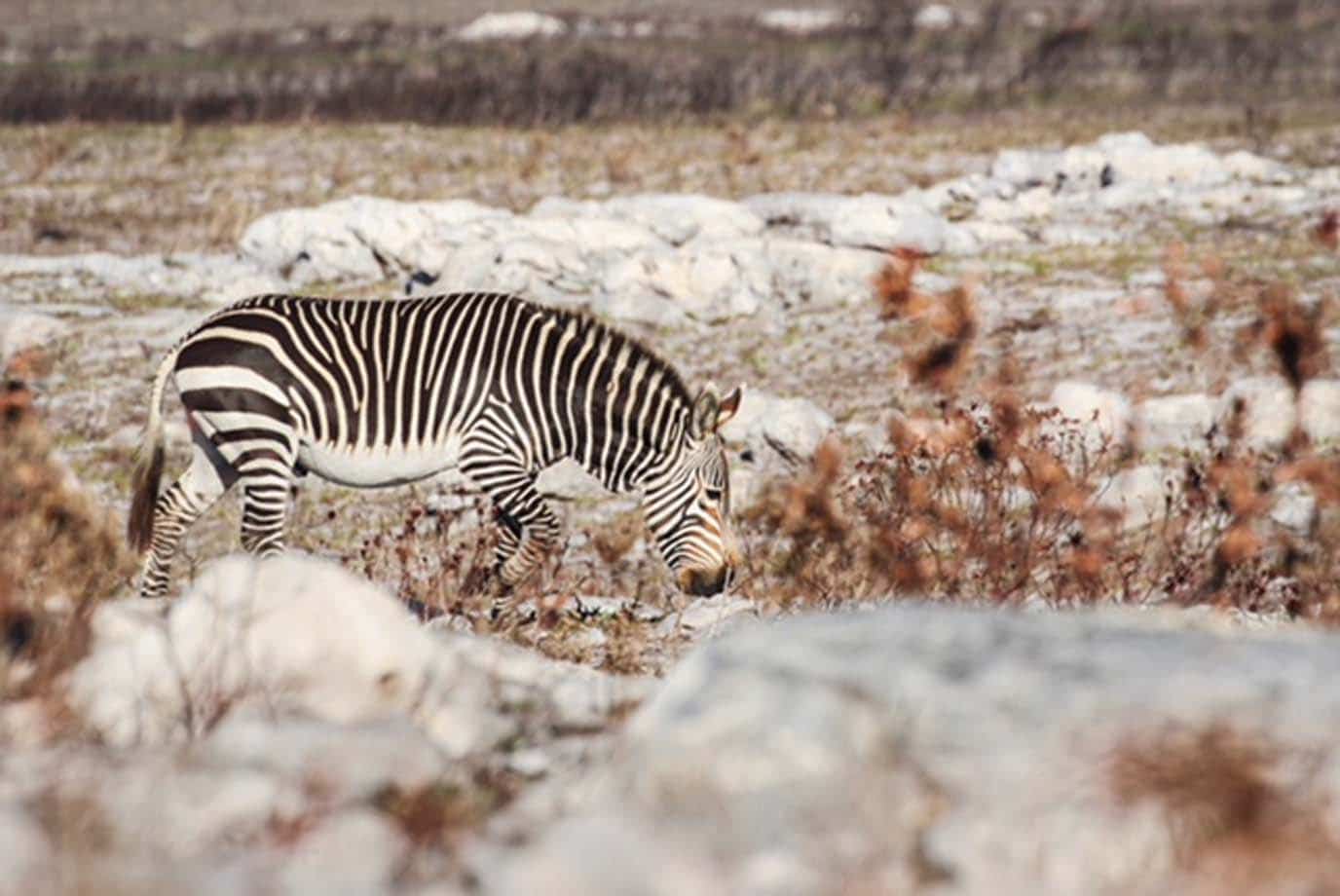 Some animals made it – but only just. The Bontebok – a prettily patterned antelope – was reduced to a couple of dozen individuals before someone decided to save a few; the Cape mountain zebra population today still numbers only a few thousand and it remains one of the world’s rarest mammals. Leopards, which once terrorised Dutch settlers and their livestock, have been pushed back to the wilder mountains that surround – but are in sight of – Cape Town. Now they are shy and secretive, keeping well away from humans. 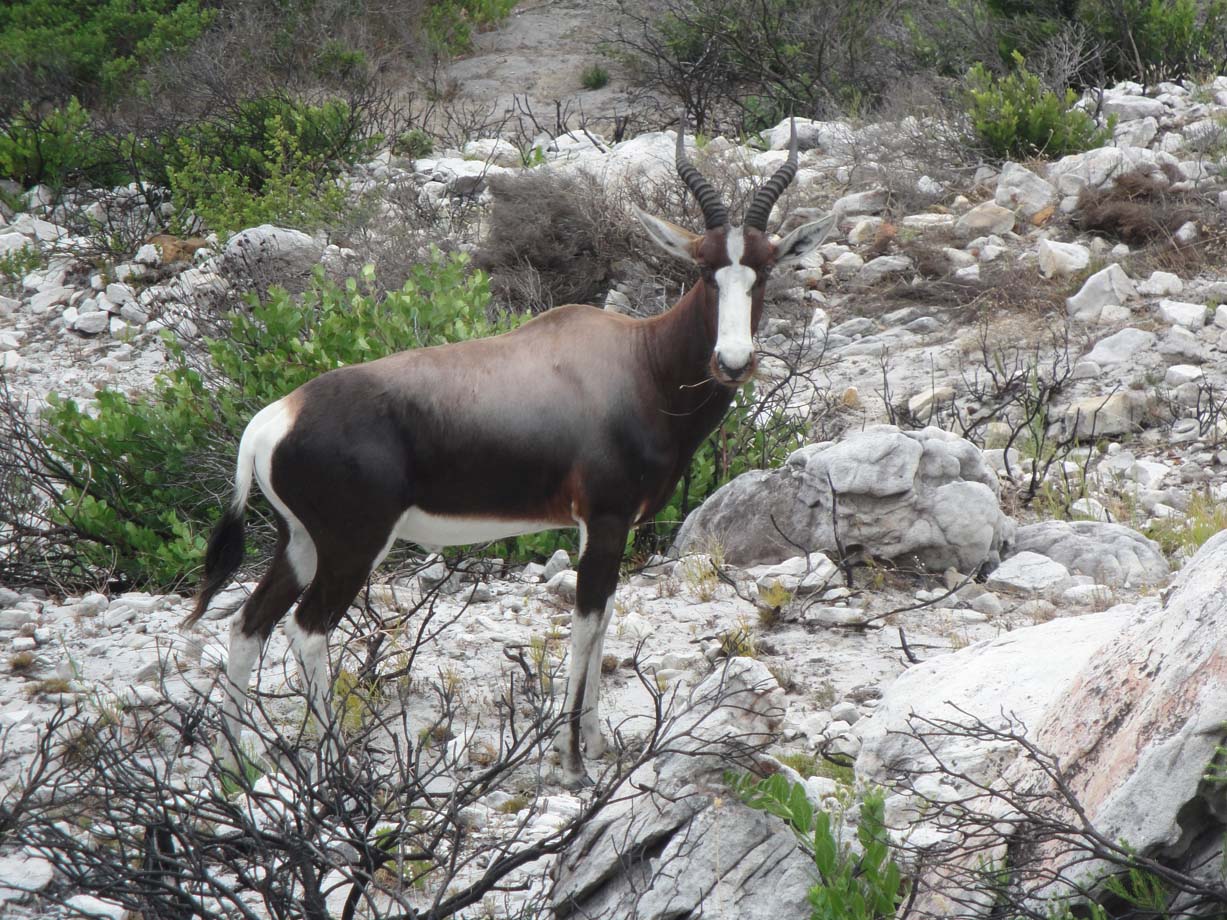 Once down to under 30 individual animals, the Bontebok is now the most common big mammal you’ll see in the Cape of Good Hope Reserve.

Such scraps might be seen as small reward for what was once an environment of staggering bio-diversity. South Africa is, after all, the third most bio-diverse country in the world (after Brazil and Indonesia) and even today half of its animals and plants occur in the Western Cape; it must have been a truly astonishing place before the arrival of the gun and plough.

But there are chances to at least have a taste of what it must have been like. A hike on Table Mountain reveals evidence of porcupines (dug-up iris bulbs) and there are always the smaller players to see – lizards, birds and insects – plus an occasional encounter with something interesting like a klipspringer, mongoose or snake. On warm mornings, ravens and buzzards use the mountain updrafts to gain height; on damp days, Cape mountain rain-frogs come bumbling out of the leaf litter; while night time is the preserve of slinky-tailed genets and eagle-owls.

Baboons are one of the few larger mammals you’ll see on the Cape Peninsula but they no longer live on Table Mountain itself.

Moving a few miles from Table Mountain, there are hippos and pelicans at Rondelvlei Nature Reserve on the Cape Flats and antelope, ostriches, baboons and otters in the Cape of Good Hope Nature Reserve. Go a little further from Cape Town and the mountains are now home to leopards, eagles and antelope; head for the coast and you have seals, penguins, sharks and whales.

And in a modern world where only 5% of animals are wild (the rest are chickens, cows, pigs, sheep and goats), I’d say it was better than nothing. 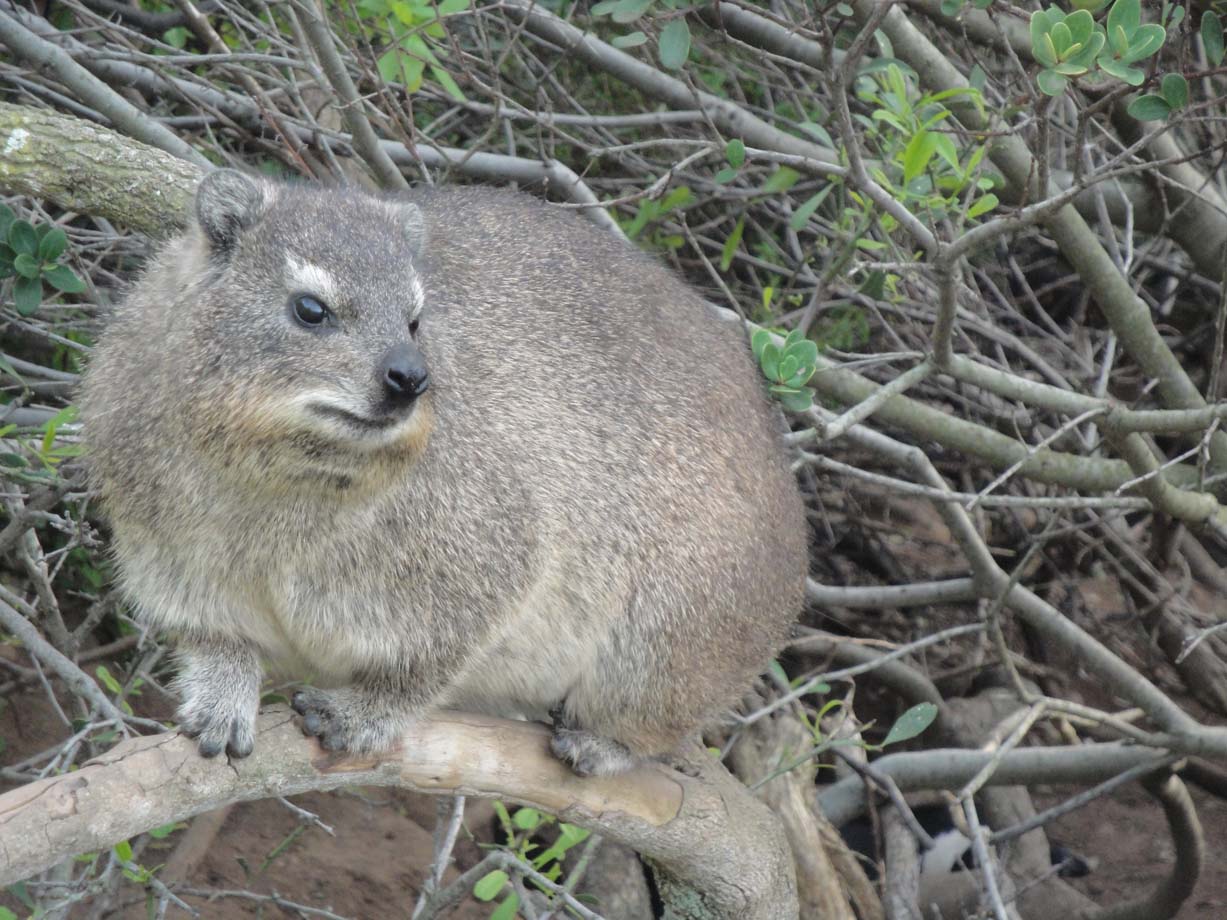 Related to elephants more than any other animal, the unassuming dassie or rock hyrax is often seen on Table Mountain close to the cable car.