THE BONEYARDS OF CAPE POINT 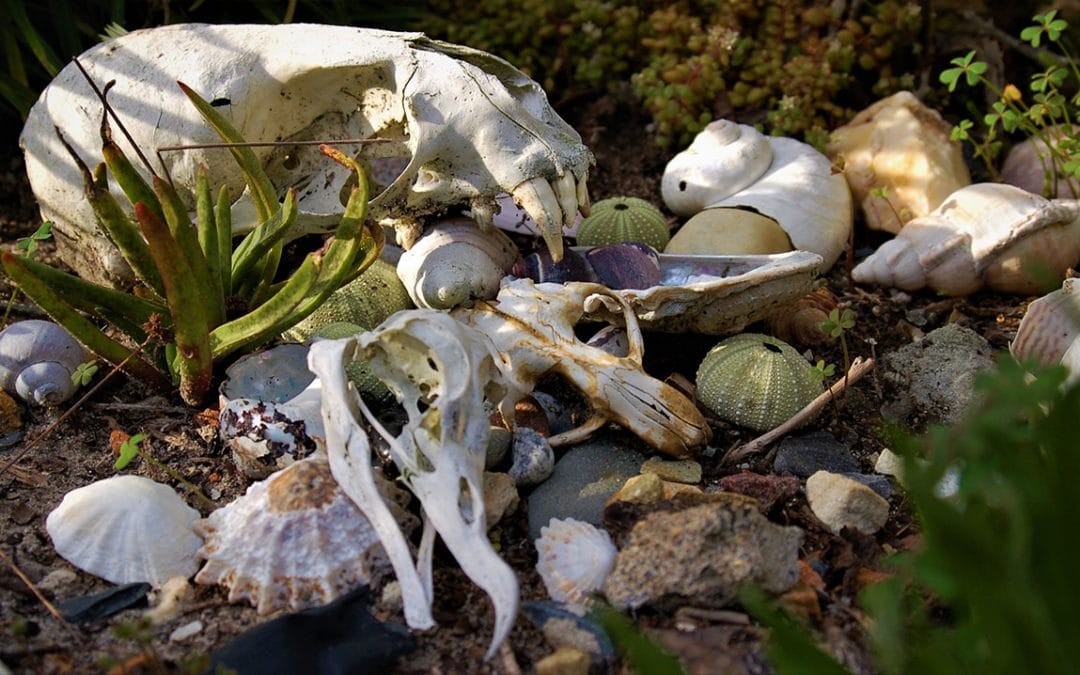 For all my boasting about the abundance of natural life at Cape Point, there’s one other thing you’ll see of lot of there. And that’s death.

It’s everywhere – bones, skulls, old carcasses, broken tortoises and discarded seashells – but don’t be surprised: Cape Point, or to be more precise the Cape of Good Hope Nature Reserve, may only cover a modest 75 square kilometres but it is home to just about every aspect of the natural world you can think of. 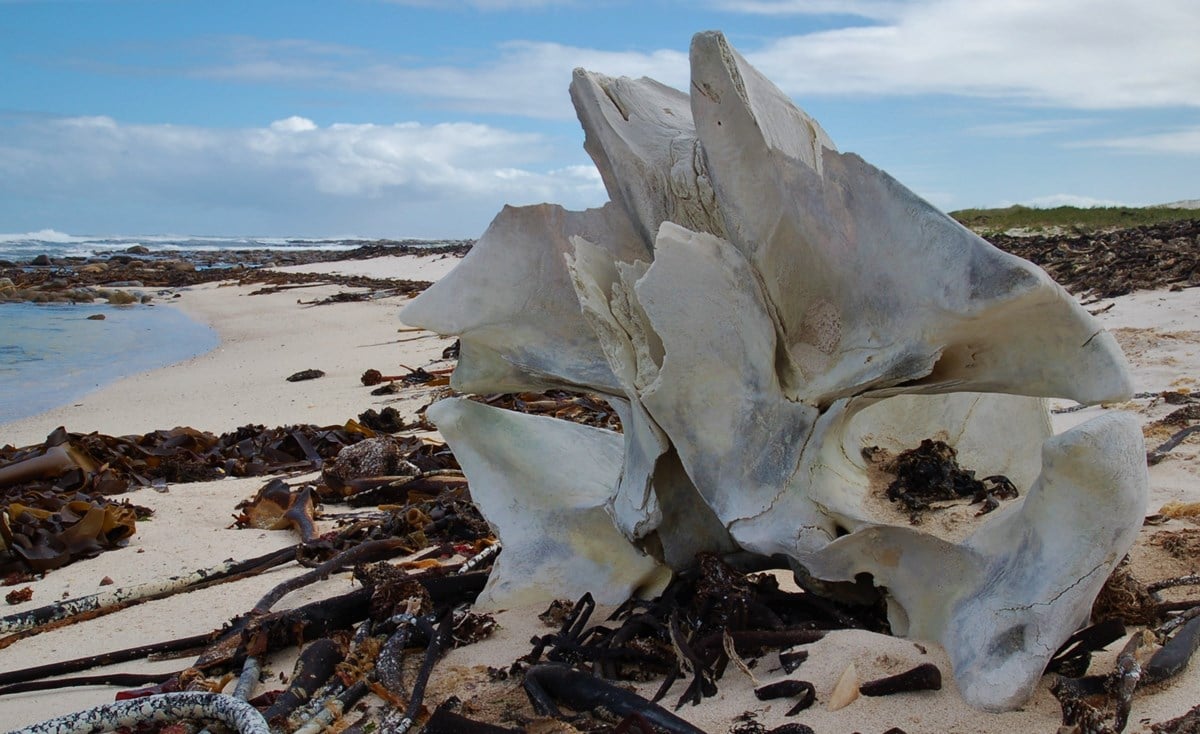 Enormous pelvic bones of long-dead whales punctuate the beaches of Good Hope Reserve, a reminder of the presence of mega-fauna (big animals) in the Cape.

There are over a thousand different plants in the reserve plus herds of big mammals and a bird list of nearly 300 recorded species. Whales and dolphins regularly visit the Cape Point coast, famous for its seal and shark populations, and if you are into marine limpets then the reserve over-indulges you with no fewer than 17 individual species. Twenty two different kinds of snakes too. It would be pretty weird if one didn’t see dead stuff at Cape Point.

There was a time when all this death played a vital role in our life. And there’s nowhere better to demonstrate this than on the reserve’s storm-lashed Atlantic coast. Let’s take a walk between two places that, when translated from Afrikaans, sound like they should be on a treasure map – Poison Cove and Flat Tree – and see for ourselves. 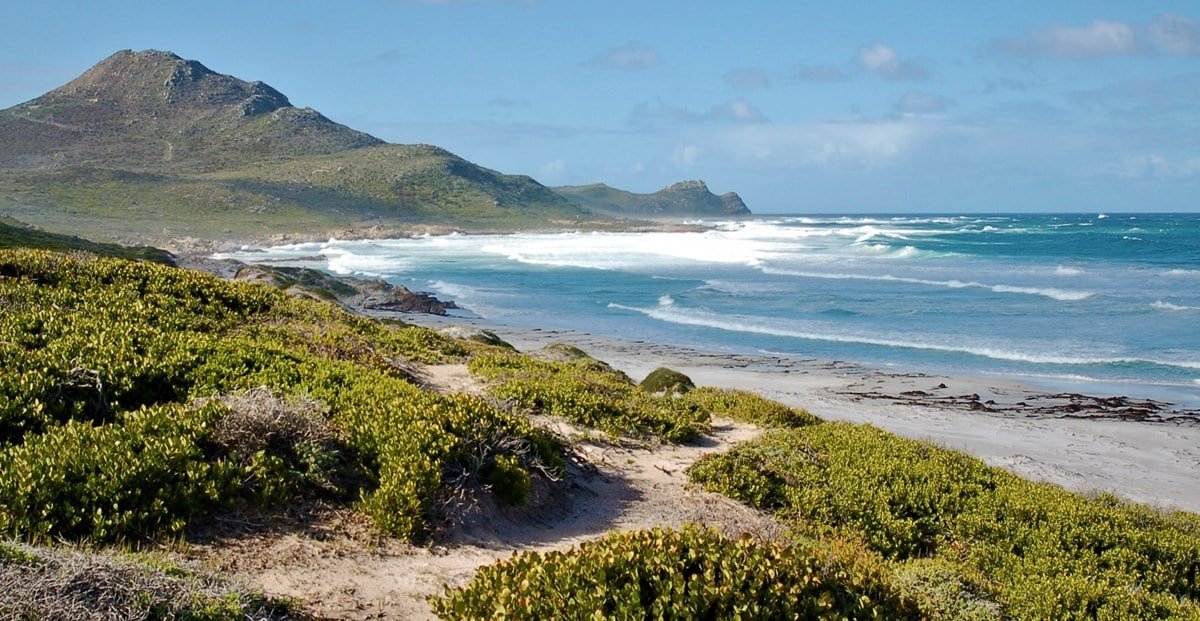 Walking south from Gifkommetjie (Poison Cove) delivers fabulous views of the Atlantic coast & the Cape of Good Hope itself.

I’ve read differing accounts of just how long Homo sapiens has been living in the Cape but pick a date between 150 000 and 1.5 million years ago and you’ll be as close as any academic could guess. Either way it’s truly a long period of time and nowhere in the world is it longer (the British Isles have only been inhabited for the last 12 000 years by way of comparison). But if there’s one thing that’s common to all humans – as you yourself will grudgingly admit – it is that they tend to take the path of least resistance. (Don’t take it personally: it’s a law of nature – even light does it.)

And so it was in the Cape. Homo sapiens taking the path of least resistance in the eternal quest for food: why waste energy or risk life and limb hunting big, dangerous animals when you can go for a leisurely stroll and find them lying around waiting for you? 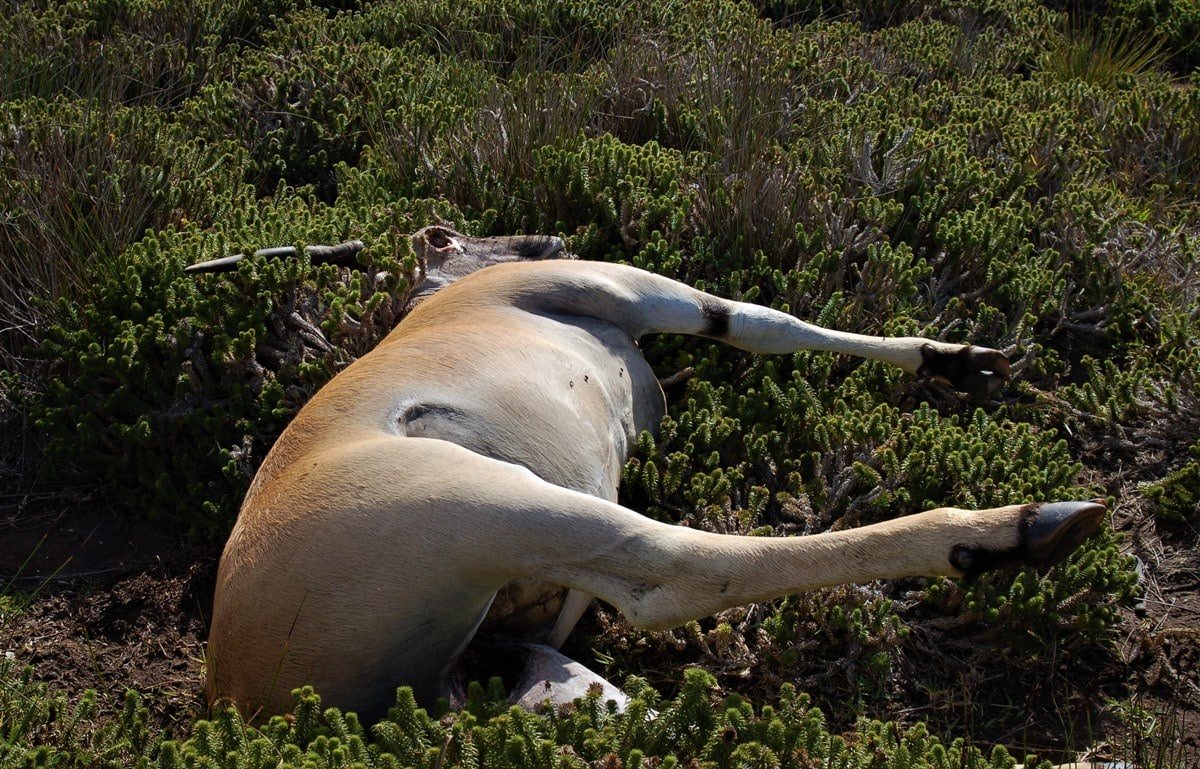 I find dead eland regularly & this one, dead only for a few days, was in the best condition by far; it would have yielded both meat & hide for human foragers.

This eland carcass was next to the path and just a few metres from the refrigerated air of a cold Atlantic beach. There were flies of course and the eyeballs had gone but it smelt no worse than a gamey pheasant and putrefaction had not yet set in. Try not to gag but it would have been a lucky find just a few hundred years ago, providing meat for your family over many weeks if not months. (One problem back then was that you’d also have to fight off fearsome Cape lions and scavenging hyenas for ownership rights.)

And if a free eland – weighing in at 800 kilos (1700 pounds) – was cause for celebration, imagine the joy at finding a beached whale. The Cape coast is still visited by southern right whales between July and October and humpback whales at the end of the year; now we count them in their hundreds but in the past there were tens of thousands of them and they must have washed up on the beaches all the time.

The tusk-like jaw bones of a large baleen whale accompany the pelvis; like the solid engines of shipwrecks, these are last parts to disappear.

The Cape’s free protein came in all shapes and sizes and it wasn’t all lying around dead: low tide reveals countless limpets and mussels while seabirds – penguins, gannets, cormorants – once nested here in their millions. And if there’s another thing you need to be prepared for in the Cape of Good Hope Reserve, it’s that anything can turn up at any time. It may not be whale season but look what’s lying helpless on the beach ready for a clubbing: 3000 kilos of elephant seal.

Stranded on a Cape Point beach in 2019, this elephant seal became a local tourist attraction but it once would have been killed & butchered on the spot. 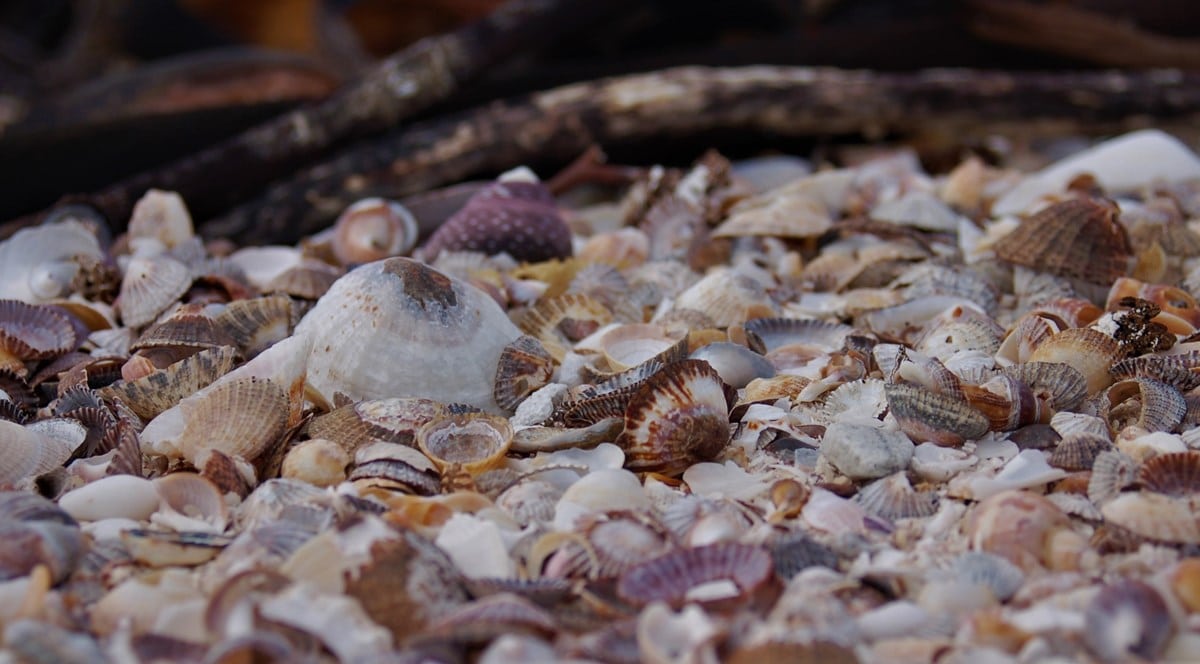 Hiking the wilder side of Cape Point reveals the extent of Atlantic Ocean’s bio-mass: great drifts of dead seashells, covering the ground like crunchy snow.

And given the Cape of Good Hope’s notorious reputation as a devourer of ships, it would be equally strange not to find evidence of human boneyards. And they are here. Hundreds of ships have fallen victim to the Cape’s stormy weather and unforgiving coastline; nearly all of them have vanished but a few persist, sticking out of the sand like great rusty-iron fossils. Most ships were lost in the 1800s when marine traffic to the Cape was at its peak but empty boats – small ones – turn up on the Cape’s beaches from time to time – silent witnesses to events you’d rather not think about.

Wrecked in 1969, the remains of the Nolloth can be found on the Atlantic coast’s well-named Shipwreck Trail.

If all this talk of death has made you feel a little down, then it’s easy to cheer oneself up in the Cape of Good Hope Reserve: the geology is captivating (no, really!) and the views are ridiculously beautiful. As well as carcasses and bones I also saw grazing bontebok antelope, happily foraging baboons and ostriches, sun-bathing lizards and shiny-feathered sunbirds. After all, there’s no death without life first.

Weather conditions at Cape Point can be pretty unforgiving – it’s hot, windy, sunny, cold and stormy, often in a single day – but it makes for fascinating geological features.

The unique unspoilt loveliness of the Cape of Good Hope landscape – this is from my car window on the main road in the reserve.