THE DEVIL WEARS GREEN: DEVIL’S PEAK AFTER THE FIRE 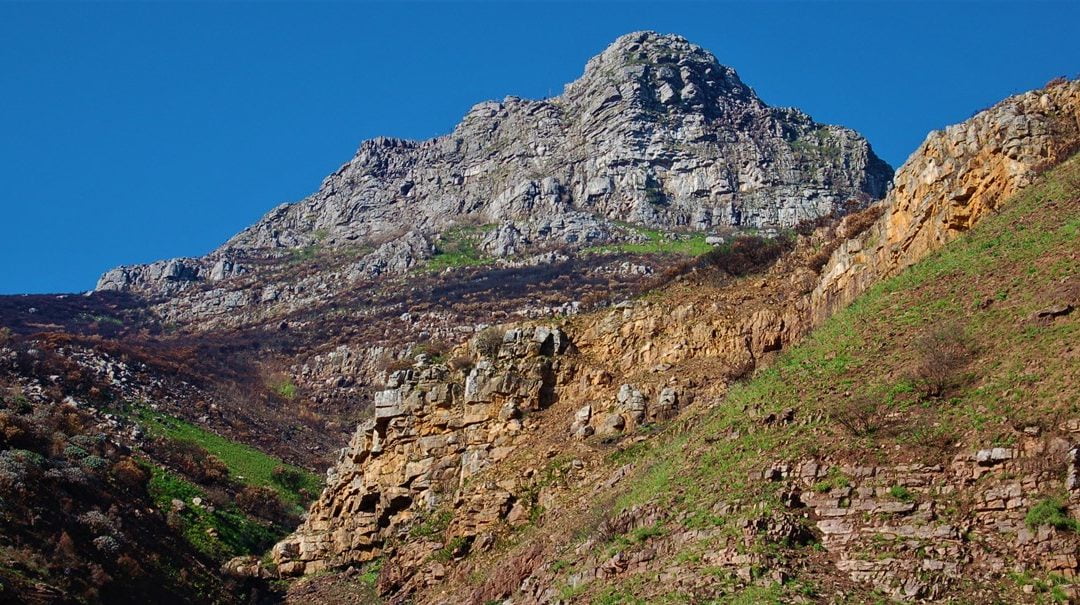 People say that it’s a bit of good luck to live in Cape Town but in April this year it was the city itself that got lucky. A fire had broken out on Devil’s Peak on an unusually hot day and worked its way south to the university before suddenly reversing direction as the wind swung around. Now the fire charged towards the city and Monday-morning commuters found themselves dusted with ash and gagging on the acrid smoke. 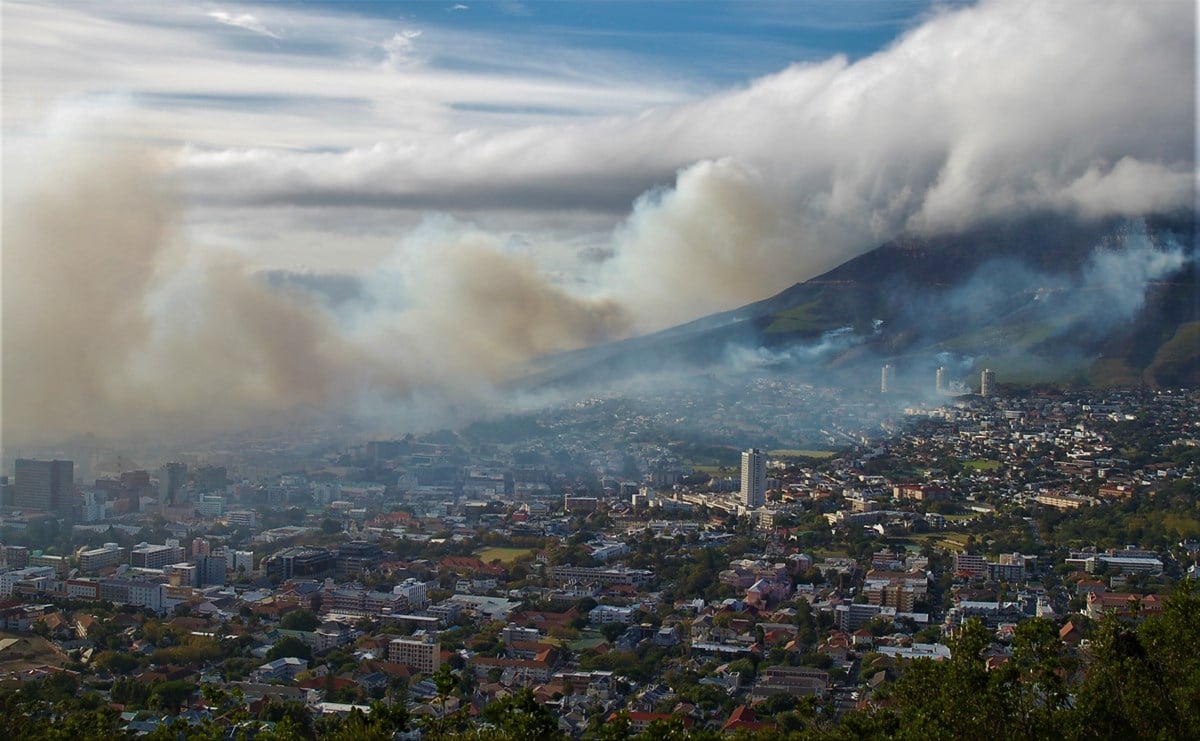 Propelled by a strong south-easterly wind, the fire sweeps over Devil’s Peak & towards the city suburbs, creating panic & evacuations.

The fire didn’t last long and it was beaten back from the city suburbs – the firefighting service saw to that – but it swept most of Devil’s Peak clean and was followed by good rains. Much of the fynbos that burned was old and decrepit and needless to say, less than three months later, the resulting grow-back has been spectacular. Green is the dominant colour as leaves of every shape burst out of the ground but there are plenty of flowers already with tens of thousands more to come.

But let us first return to the first few days after the fire. 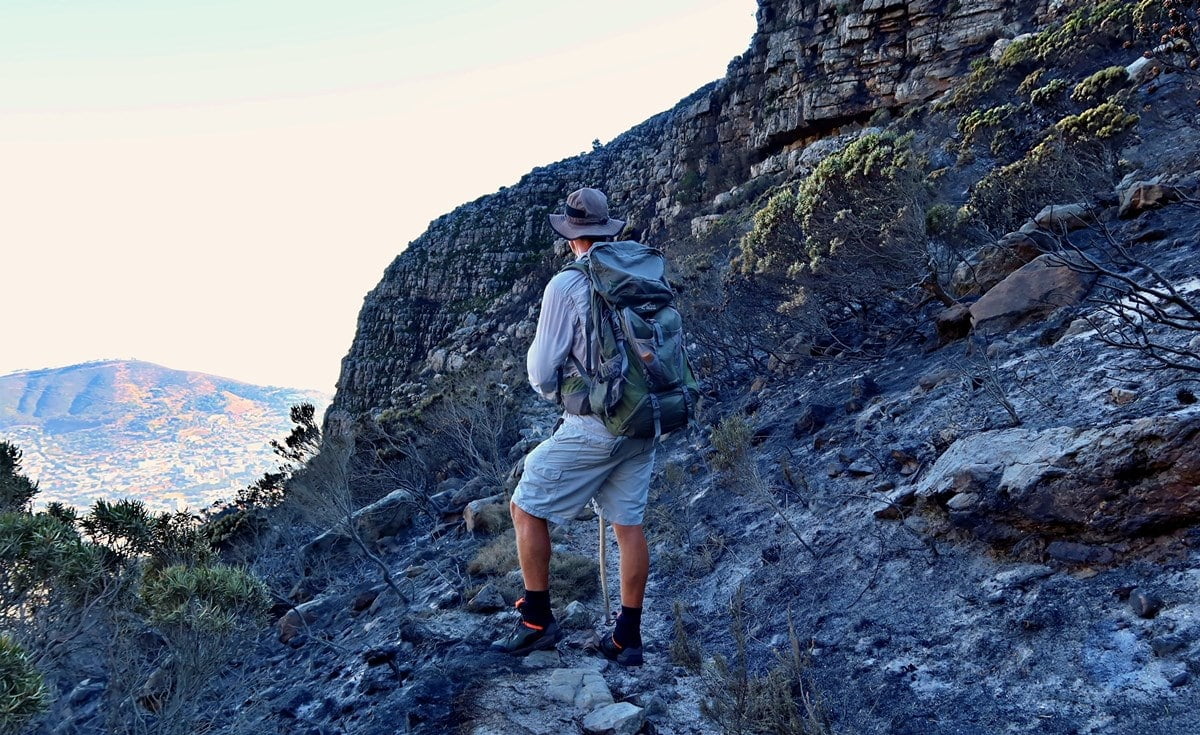 The sight of a charred, smoking mountain is quite shocking; it’s no wonder most people – even locals – regard fires in a negative light. Image kind courtesy of Nick Ashby.

There’s no obvious greenery left after the flames. And this particular fire had been so hot – and the air so dry – that there were large areas of unburnt vegetation with all the moisture sucked out of it, leaving behind a brown and withered landscape. Wait! Did I just say there was no green to be seen? It seems almost impossible but what’s this? 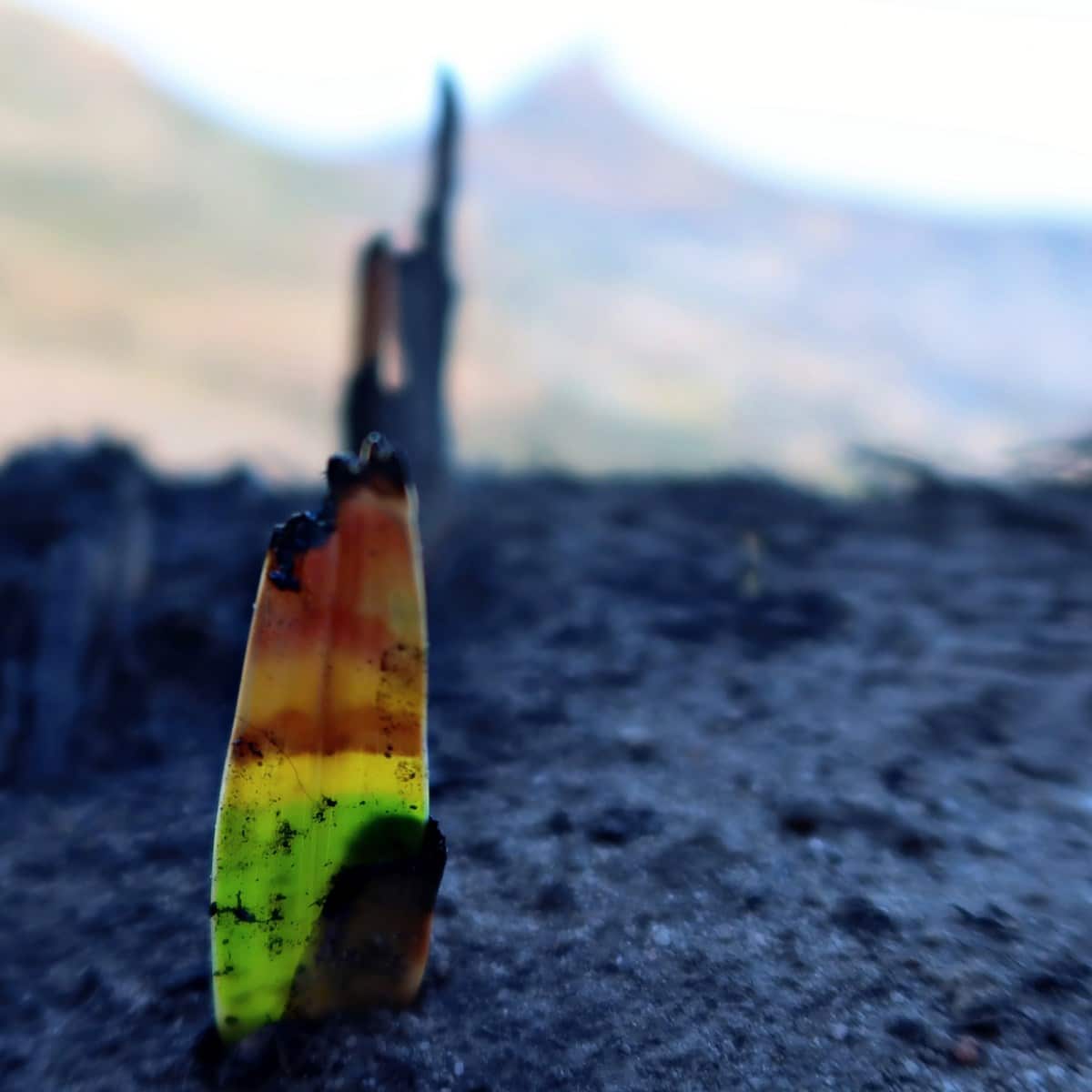 It hasn’t even been three full days after the fire but a centimetre of new greenery signals the intent of this Watsonia (Iris). Image kind courtesy of Nick Ashby.

And there was hard evidence of much more to come. Ejected from their protective cones after the fire, hairy Protea seeds littered the mountainsides, lying in wind-blown drifts like snow. And the parachute-like hairs don’t just help to disperse the seed from the mother plant: by opening and closing like a fist according to temperature, the hairs push the seed into the soil and out of sight of predators like mice and canaries. 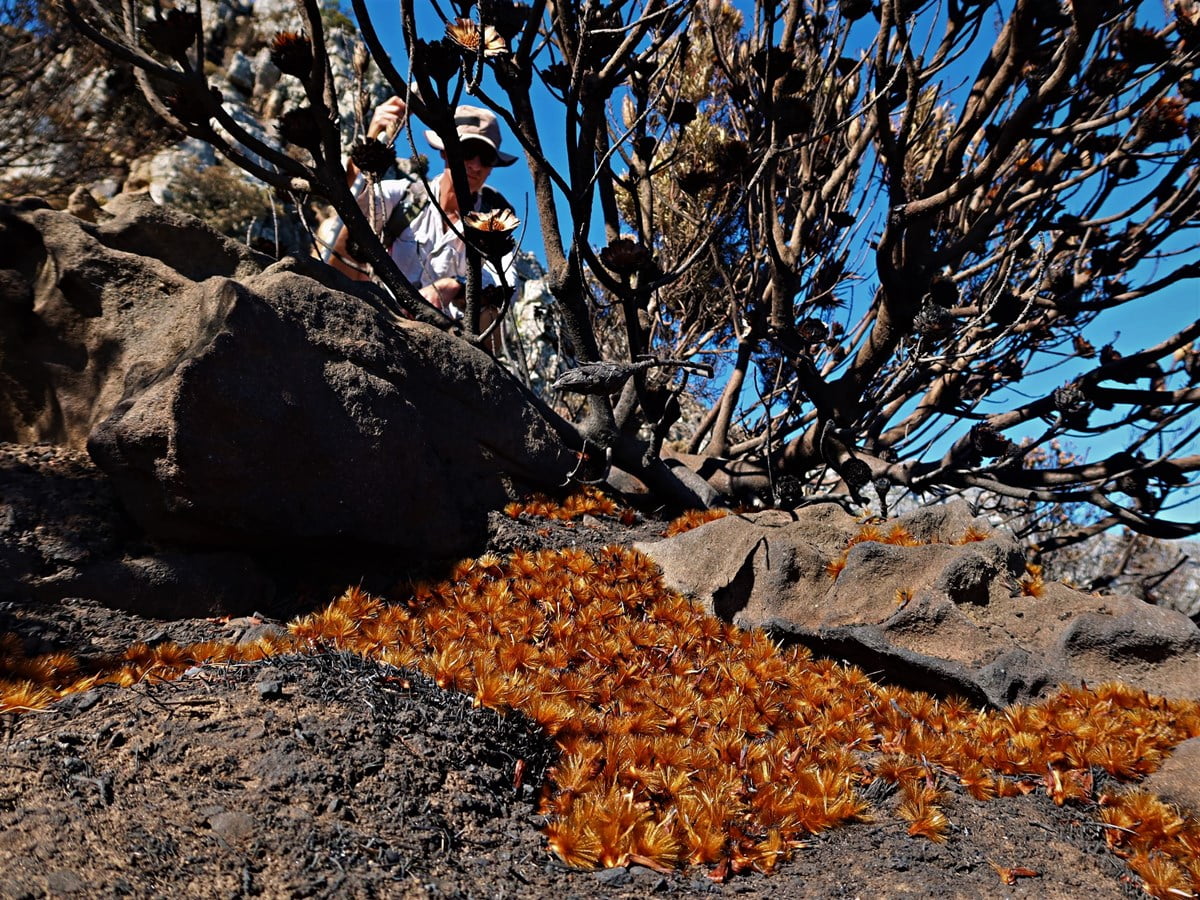 Piles of Protea seeds glow like warm bronze against the burnt browns & greys of the mountain. Image kind courtesy of Nick Ashby.

The piles of seeds are a reminder that many fynbos plants are re-seeders – plants that rely on their seeds to survive a fire, dispersing them before or after a fire – but on Devil’s Peak there are great examples of re-sprouters too – plants that are largely fire-resistant and bounce back from a charred stump or root. 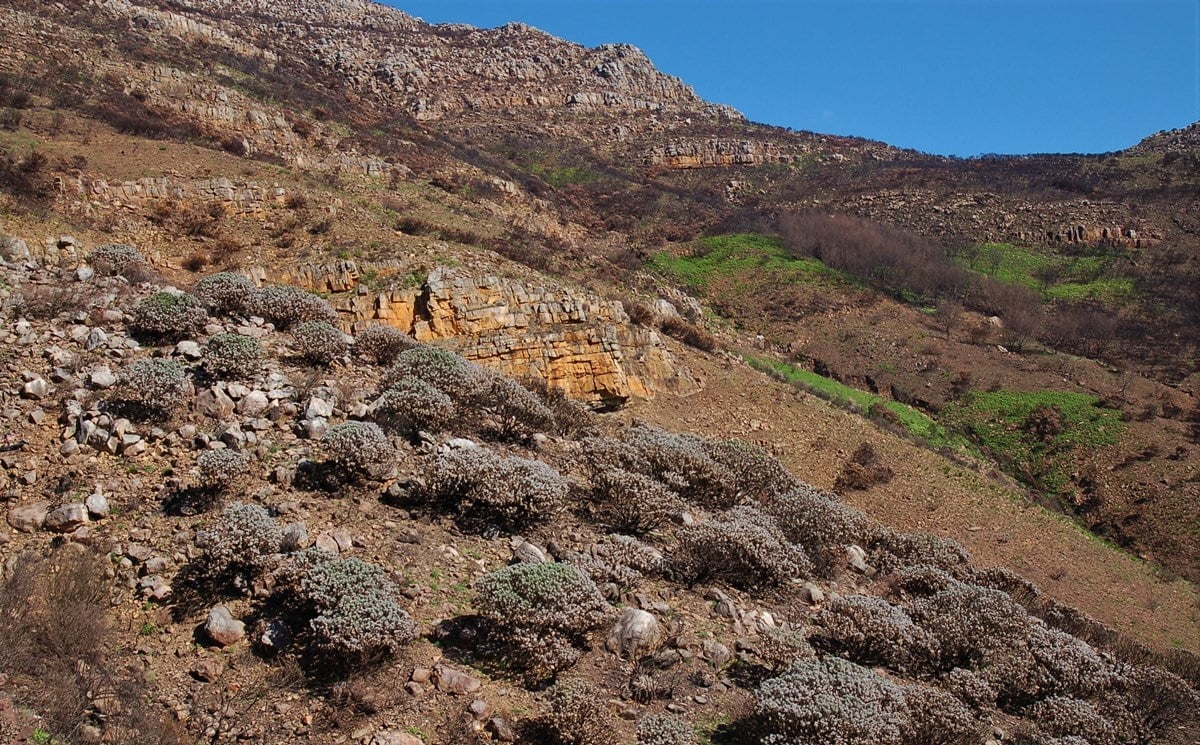 The fire raced through the large Pincushion Proteas (Leucospermum) in the foreground & reduced their leaves to withered crisps but trunks & branches remained intact. 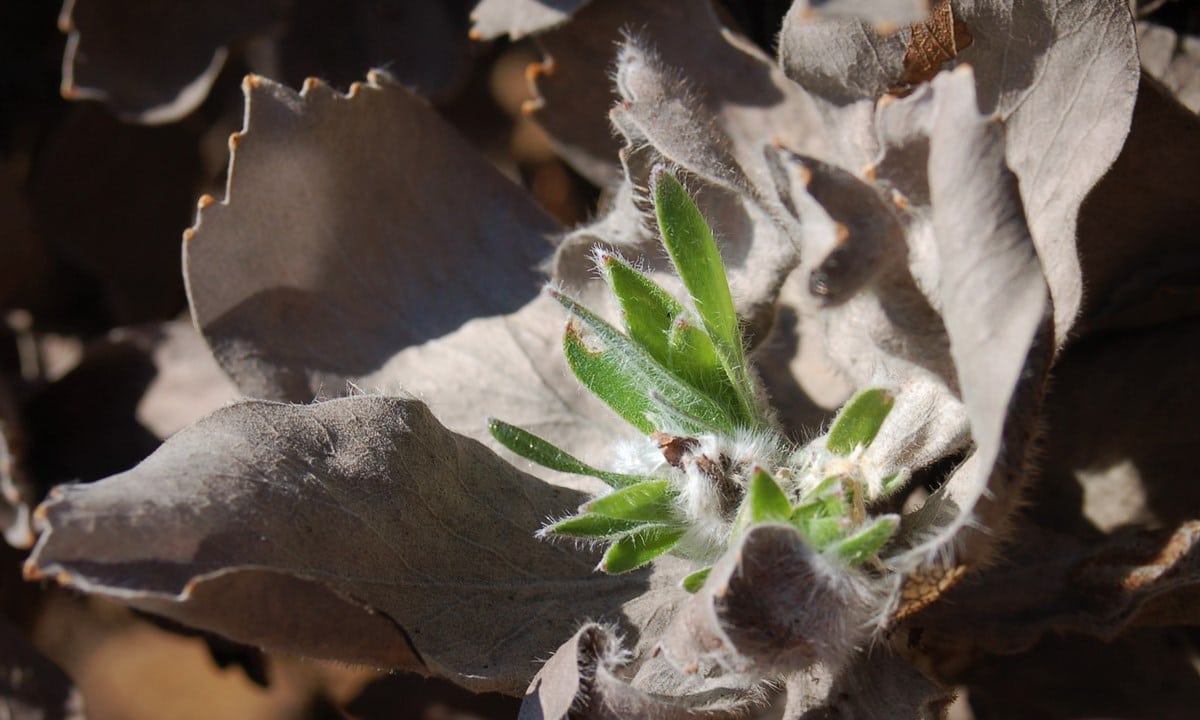 And a couple of days later, the first new green leaves appear; by the end of the rainy season the Proteas will be fully green again.

But what is getting me really excited about the grow-back is the promise of geophytes – underground plants like bulbs that have been patiently waiting for years if not decades to put on a show. There are plenty in fynbos and even more in renosterveld, the vegetation that covers the lower clay soils of Devil’s Peak. These plants – many of which are in the Orchid, Hyacinth, Iris and Amaryllis families – have been stung into life by the heat of the fire, or its smoke, or exposure to sunlight and moisture now that all the old shady vegetation has been conveniently cleared away. And, nine weeks after the fire, there were several geophytes already in flower. 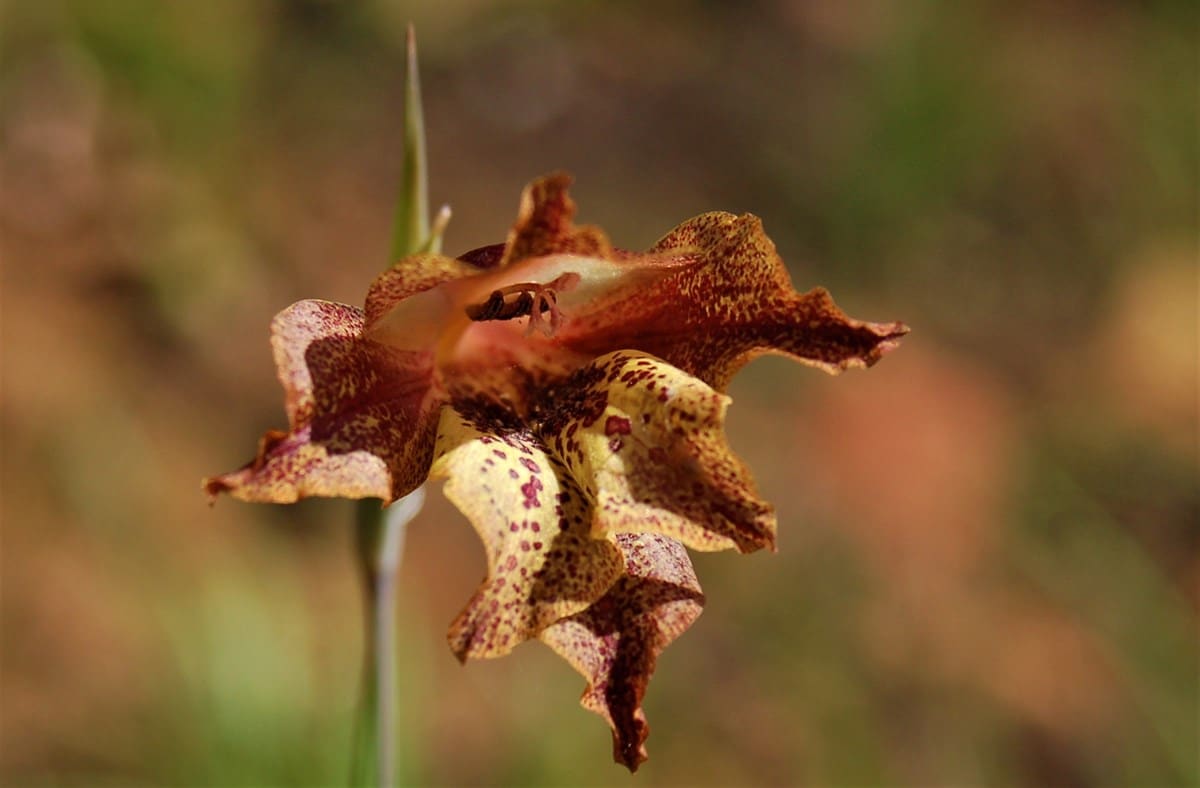 The Large Brown Afrikaner (Gladiolus maculatus) not only has an interesting name but its scent reminds the hungry hiker of boerwors, the local spiced meat sausage. 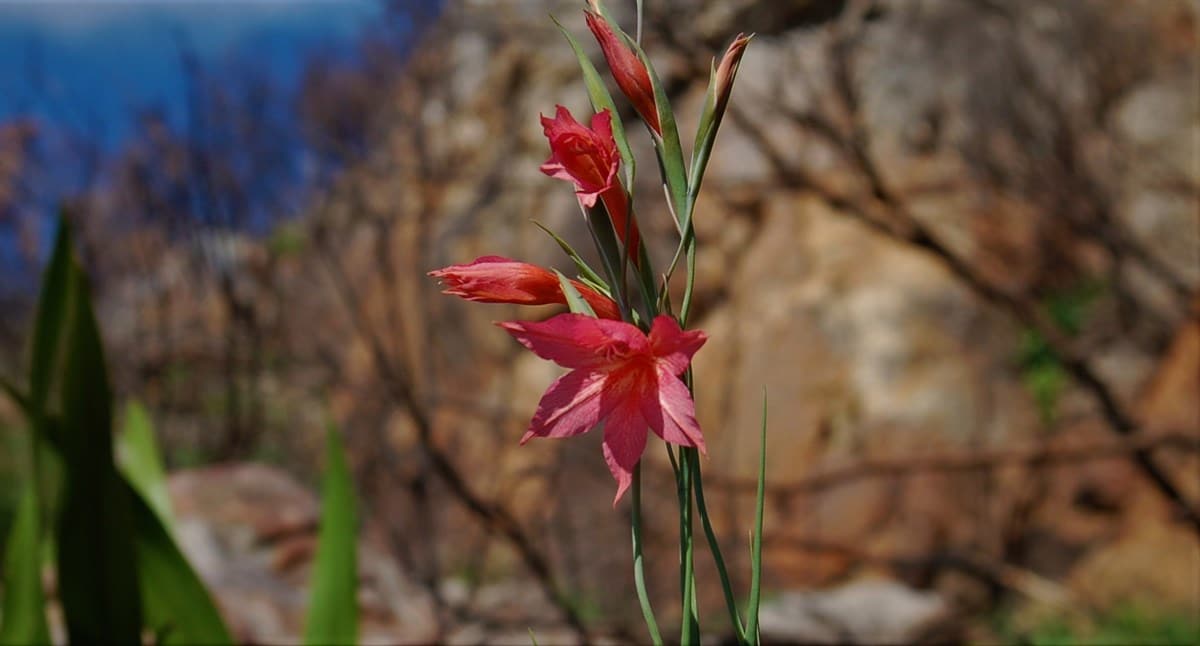 The Red Afrikaner (Gladiolus priorii), on the other hand, has no scent; presumably its colour attracts birds rather than insects which prefer flowers with lighter colours & smells. 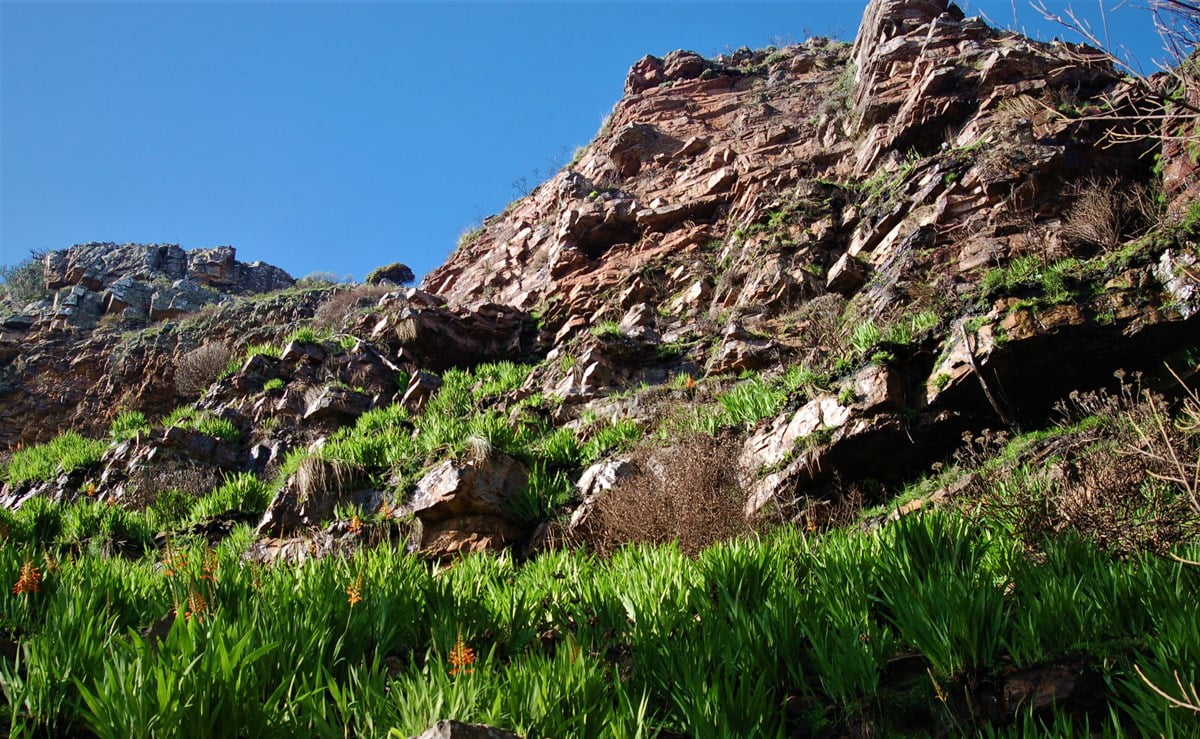 Layers of Cobra Lilies (Chasmanthe aethiopica) were beginning to come into flower; if it looks familiar it’s because it is also a common garden plant.

It’s a unique opportunity to see Devil’s Peak at its most flamboyant and it couldn’t be easier to experience: park your car at the Devil’s Peak parking area (a five-minute drive from the cable car station) and start there. The tarred road continues along Devil’s Peak but for pedestrians and cyclists only (a concrete barrier prevents traffic) and you not only have acres of rapidly regenerating fynbos in front of you but stunning views of Cape Town too. And you’ll see indeed that The Devil wears Green.