THE SECRET TREASURE OF POISON COVE 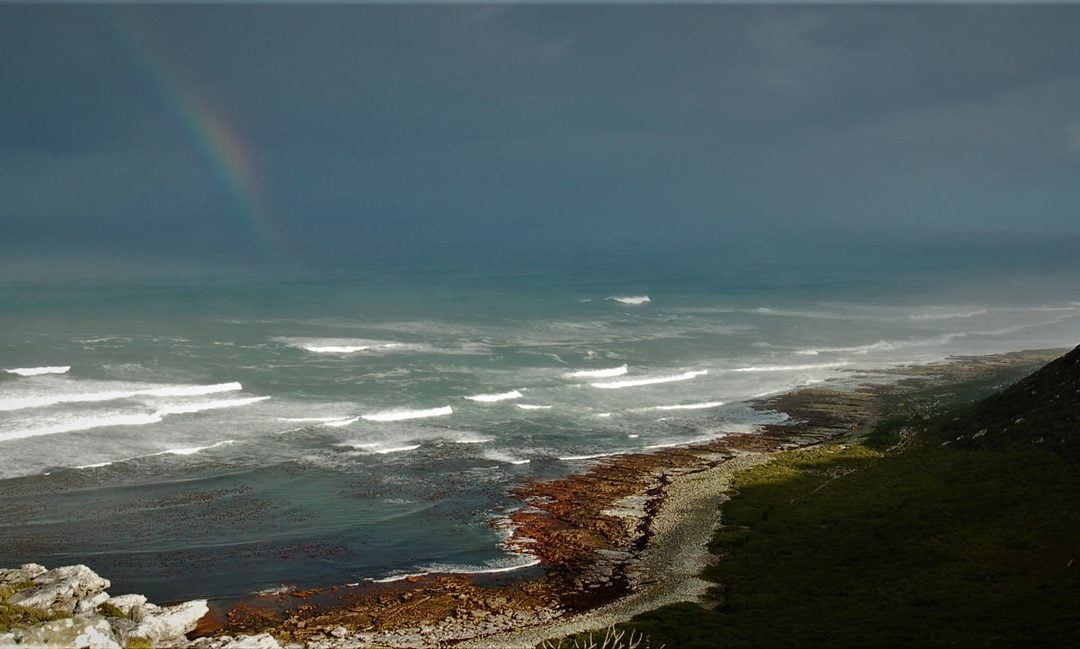 Dark-keeled clouds greeted my arrival at Gifkommetjie in the Cape Point reserve; cold Atlantic rain began to wash over winter fynbos. The temperature fell, the sun disappeared and rain picked up the pace. But then again, no-one said finding the secret treasure of Poison Cove was going to be easy.

Gifkommetjie – pronounced ‘Hiff-kom-icky’ with a throat clearance on the first syllable if you can manage it – lies little more than a mile’s drive from ever-popular Cape Point but it may as well be a thousand miles away. Its car park is usually deserted and once you begin walking, the views are unchanged from the last several million years. 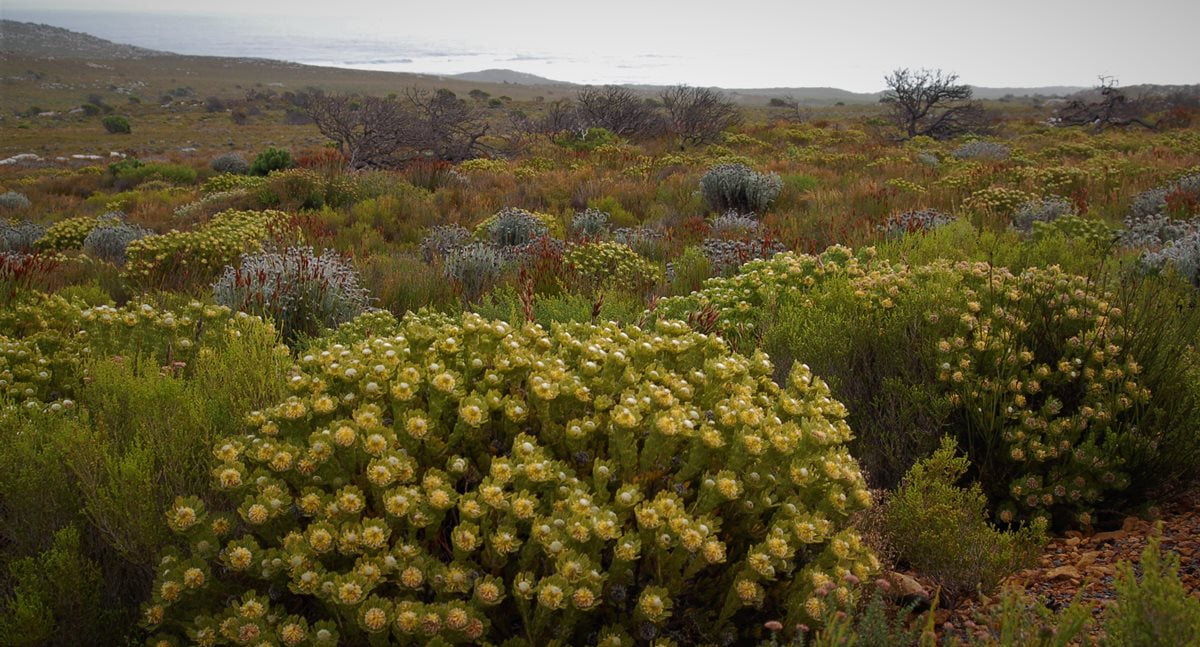 The intriguing Afrikaans name for the area translates loosely as Poison Cove: the ‘kommetjie’ being a small basin and the “Gif’ referring to this plant below. 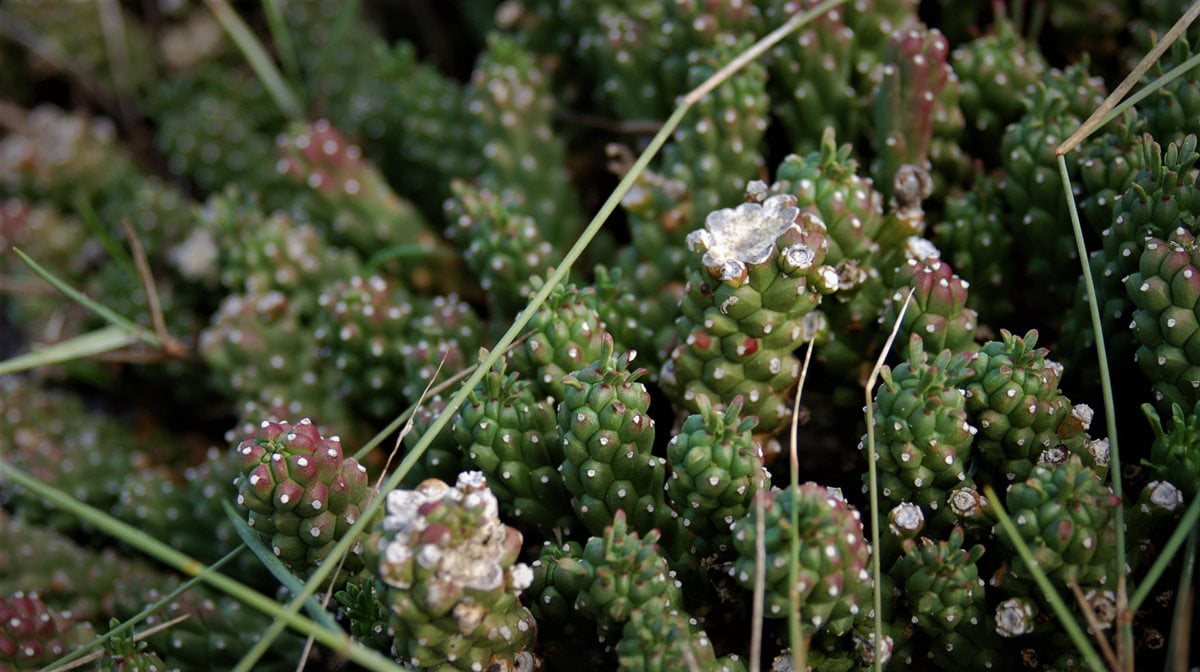 The writhing fleshy stems of Euphorbia caput-medusae inspired the plant’s common name of Medusa’s Hair, and it is as much a poisonous guardian as was the snake-haired mythological monster.

The word ‘medusa’ comes from the Greek verb to protect and Euphorbia caput-medusae has certainly done that. Growing in abundance here, the plant’s stems contain a thin milky liquid that is toxic to browsing livestock such as goats and sheep (bees even produce a poisonous honey if foraging on its flowers) and the result is that humans and their domesticated animals could never make a living on these coastal hinterlands.

And without Man’s heavy hand on the environment, the treasures remain. 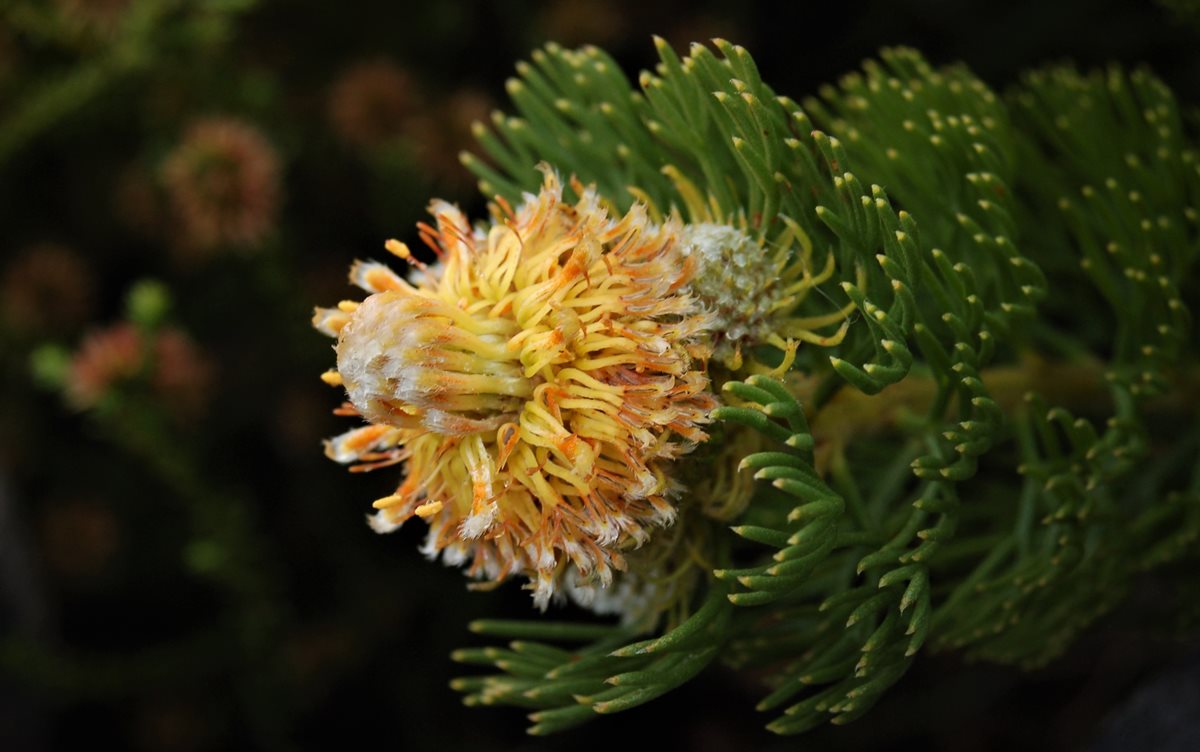 I started walking on the rocky hills above the Atlantic Ocean and then … GOLD! That was easy: well, for the Golden Spiderhead anyway. In fact, it’s everywhere here – but only here. Restricted to the southern Cape Peninsula, Serruria villosa is in the Protea family and Gifkommetjie is its stronghold. There are a number of Spiderheads in fynbos (the common name refers to the untidy, webby look of their old flowers) and they have forged a fascinating alliance with – of all things – ants.

Spiderheads, as well as several other fynbos plants, employ a strategy called Myrmecochory (pronounced ‘my-me-co-corrie’) for the dispersal of their seeds. Rather than simply eject them randomly and hope for the best, the Spiderheads attach to their seeds a tasty morsel called an elaiosome; ants harvest the seeds and take them underground to eat the elaiosome but the seed itself remains intact. Having successfully buried itself away from above-ground predators such as canaries and mice, the seed simply has to wait for the next fire to trigger it into germination. 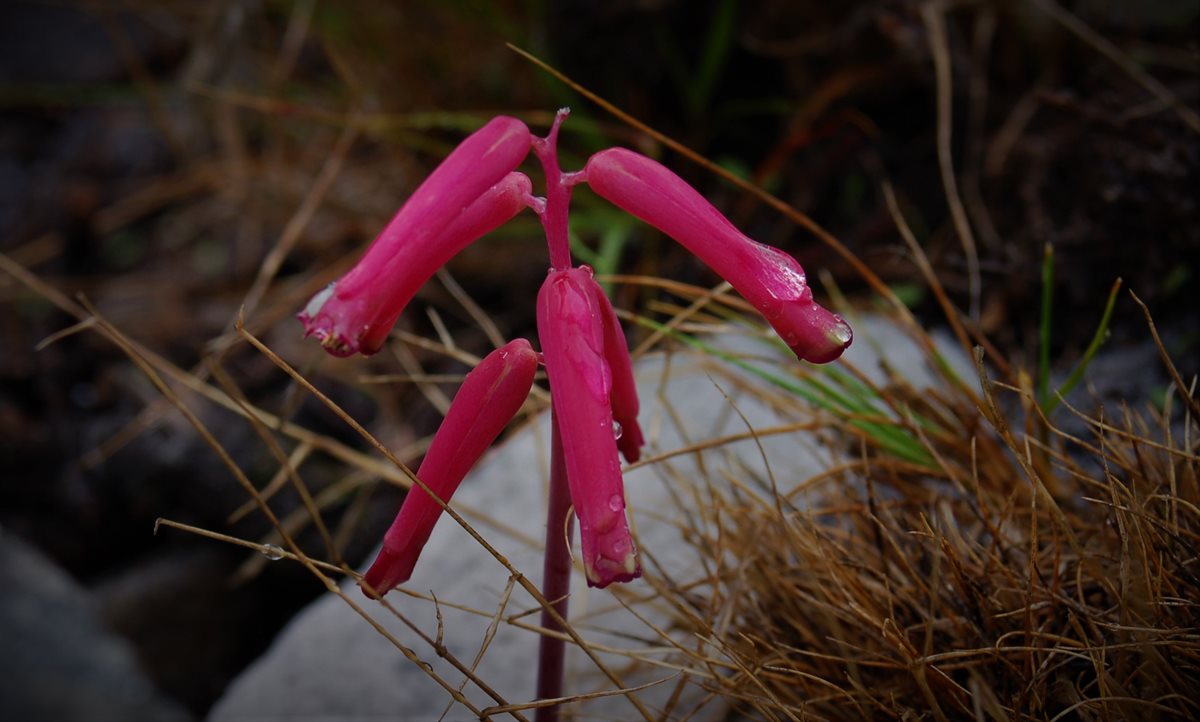 AND RUBIES! Perhaps this treasure hunting isn’t so difficult after all. Named after the precious red gemstone, Lachenalia rubida is called a Rooiviooltjie in Afrikaans – a Small Red Violet – but it’s in the Hyacinth family. Commonly found on the Cape’s sandy soils, it signalled a drop in altitude; I was getting nearer the ocean and that’s when the treasure began to appear in even greater troves.

Now here’s some real reward: FOOD. The Eland is Africa’s largest antelope and it so dominated the edible economy of the indigenous Khoisan people that 90% of animal paintings depicted at South African rock art sites are these huge beasts. They know it too; Eland are wary of anything on two legs approaching them (with the exception of ostriches) and their natural defence is to keep bow-and-arrow distance away from us. 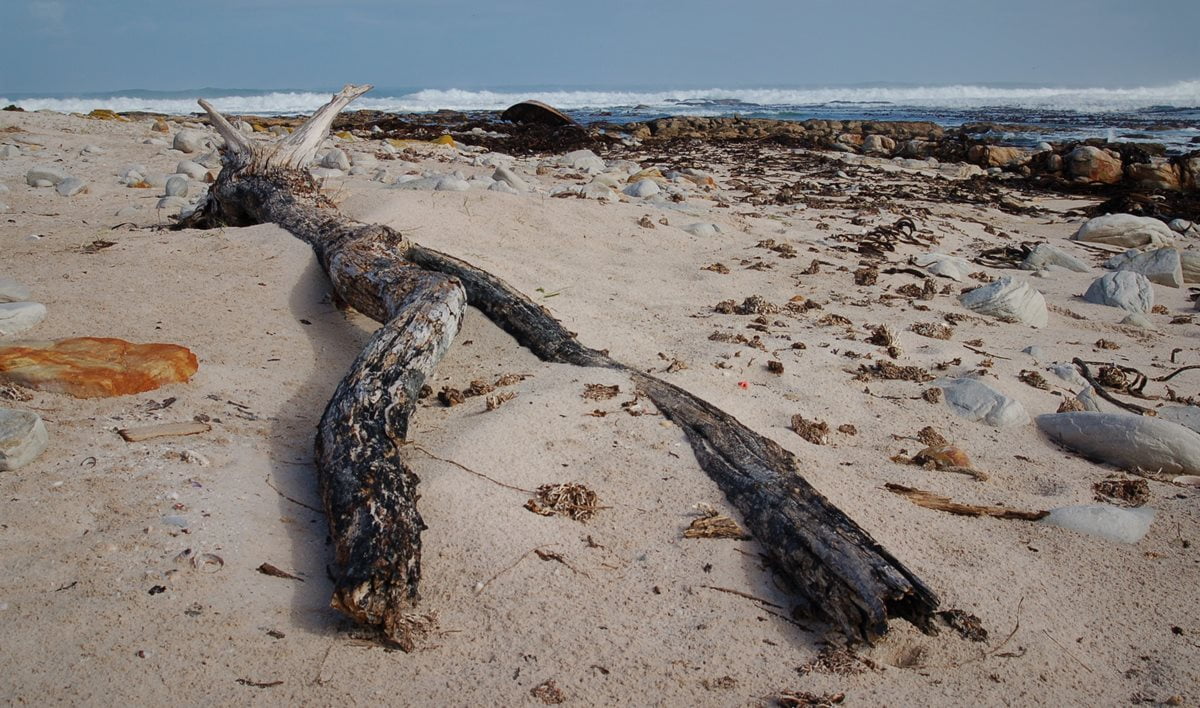 And then a sign: a crooked stick pointing towards a battered old shipwreck: what might be found in there?

AQUAMARINE: I grew up in England and my seaside trips were to an ocean that was usually brown but occasionally grey when the sun put in a brief appearance. I’d never seen an ocean this luminous blue before I moved to the Cape and I’d never seen such a ferocious one either. Not for nothing was this place called the ‘Cape of Storms’ back in the days of sail. The shipwreck at Gifkommetjie is just one of over 650 ships smashed and sunk off the Cape Peninsula – there could well be Spanish gold lying off the coast here but getting it is quite another story.

JEWELLERY: The unrelenting savagery of the Atlantic Ocean also means the beaches are almost untouched by humans. Great drifts of uncollected shells – limpets, mussels, whelks, clams – pile up and it is impossible to walk on them without going “Oo, that’s a nice one”. You can be sure that the earliest people here – the Khoisan – used shells as part of their designs for necklaces and so on but that wasn’t their chief interest in them. 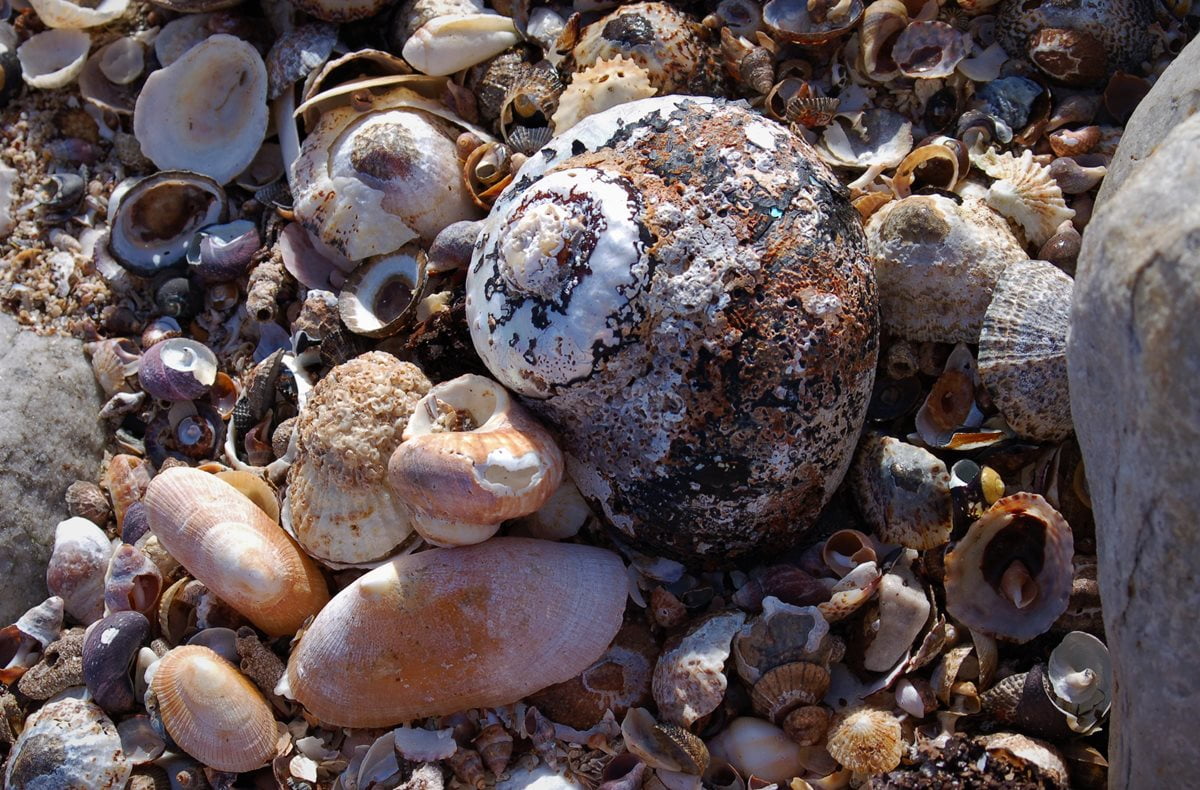 The monstrous shell in the middle is an Alikkreukel, the Giant Periwinkle, edible and still collected today for food but the big prize lay just a little further away. 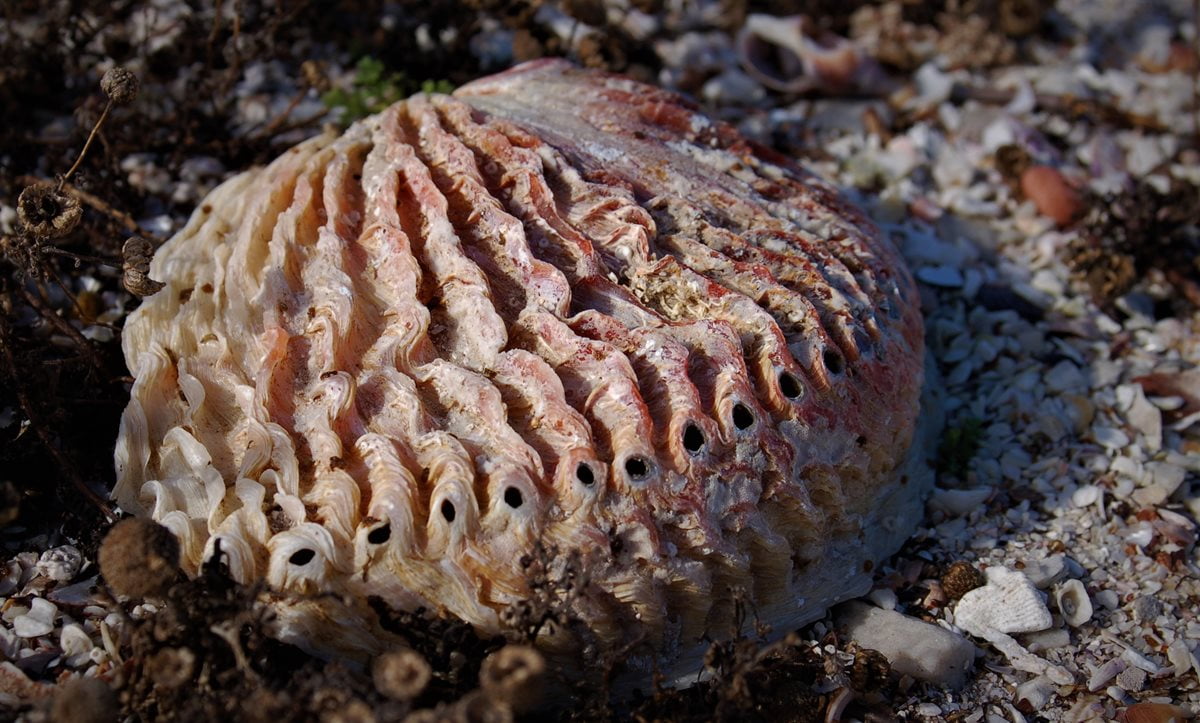 CORAL is the colour of this Abalone’s top shell but underneath is a PEARL lining which gives this marine snail its Afrikaans name – Perlemone – Mother of Pearl. And this is something that really does attract pirates. Abalone is a highly sought-after food ingredient and its stocks have been ravaged by poachers, collecting for an illegal export industry. It’s a species in rapid, tragic decline along the Cape coast but it’s not as rare as the treasure below.

IVORY: the curved rolls of shiny white sand on the Atlantic coast reminded me of the tusks of some great old elephant and this geological feature has almost disappeared from the Cape coast along with history’s big tuskers. This is a rising and falling dune system – a series of dynamic dunes that transfer sand in wind-blown waves from one beach to another. Inexorably inching forward year after year, the dunes patiently make their way across the beach, forever reinforced by yet more waves of sand. Nearly all of them in the Cape have been ‘stabilised’ and built on (with varying degrees of success); this is the only one left on the Cape Peninsula.

The sun came out as I was making my way back to the car; I paused at an unexpected grave. A surfing accident some years ago, I found out later. Sometimes Gifkommetjie doesn’t give up her secrets too easily. 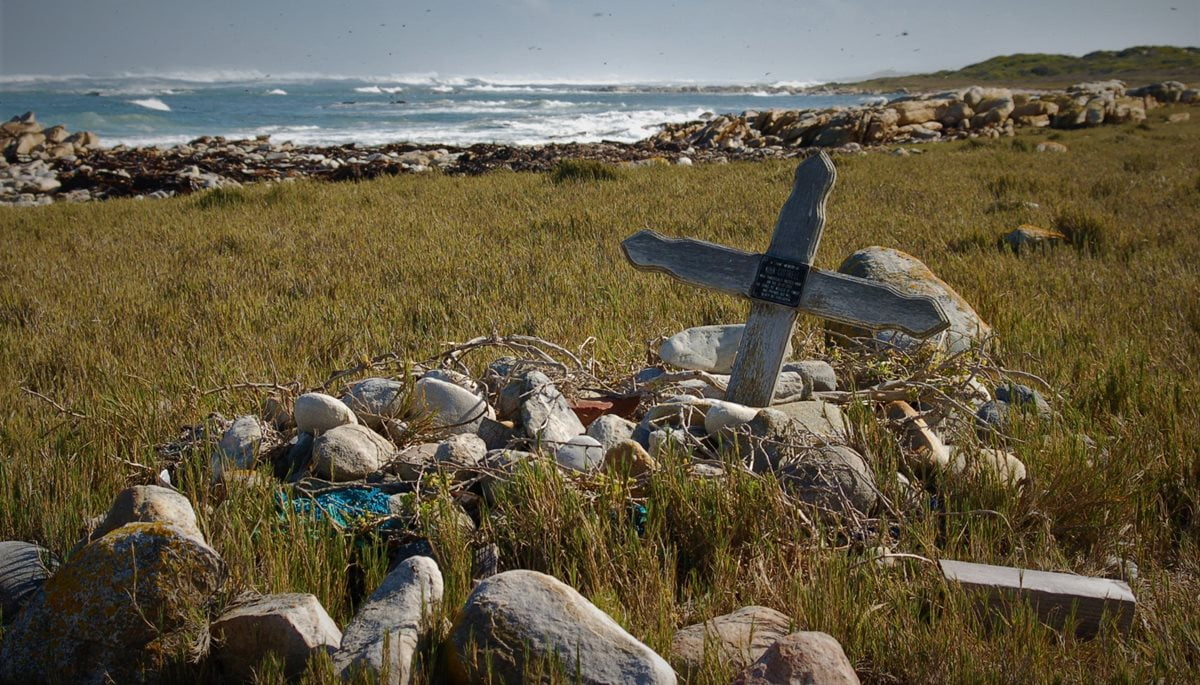