Ever got home after doing the shopping and discovered – with a groan and the slap of your forehead – that you’ve forgotten to buy sugar? Or an intestinal worm purgative? Don’t worry, it happens to me too.

These days you remedy the situation by trying to remember the wretched thing the next time you go to the shops but in the days before corner stores and refrigeration, we had to make do with what was growing or running around. And if you know where to look, there’s usually just about everything you need.

I wouldn’t be surprised if you scoffed at my claim that fynbos – the vegetation that covers the Cape mountains – has any uses at all. At first glance it appears decidedly ungenerous: it’s a patchwork of wind-swept rocks, bushes and reeds with little to no obvious wildlife. 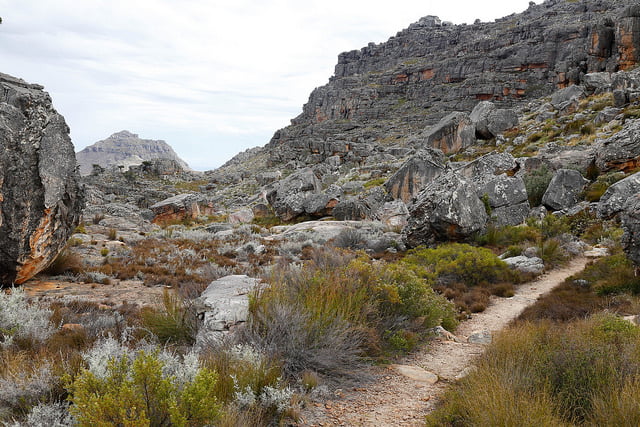 The general appearance of fynbos does not excite the hungry traveller – it is, after all, ‘fine bush’ or perhaps better translated as ‘thin bush’.

But combine the knowledge of the indigenous Khoisan people with the hard-won findings of the European settlers and suddenly you have a landscape brimming with plants for every occasion. From feather dusters and talcum powder to teas, medicines, dyes and – yes – sugar and worm purgatives. It’s all out there in fynbos.

In truth, there’s not much diversity of food in fynbos but there’s a lot of something: I hope you like the taste of chestnuts. 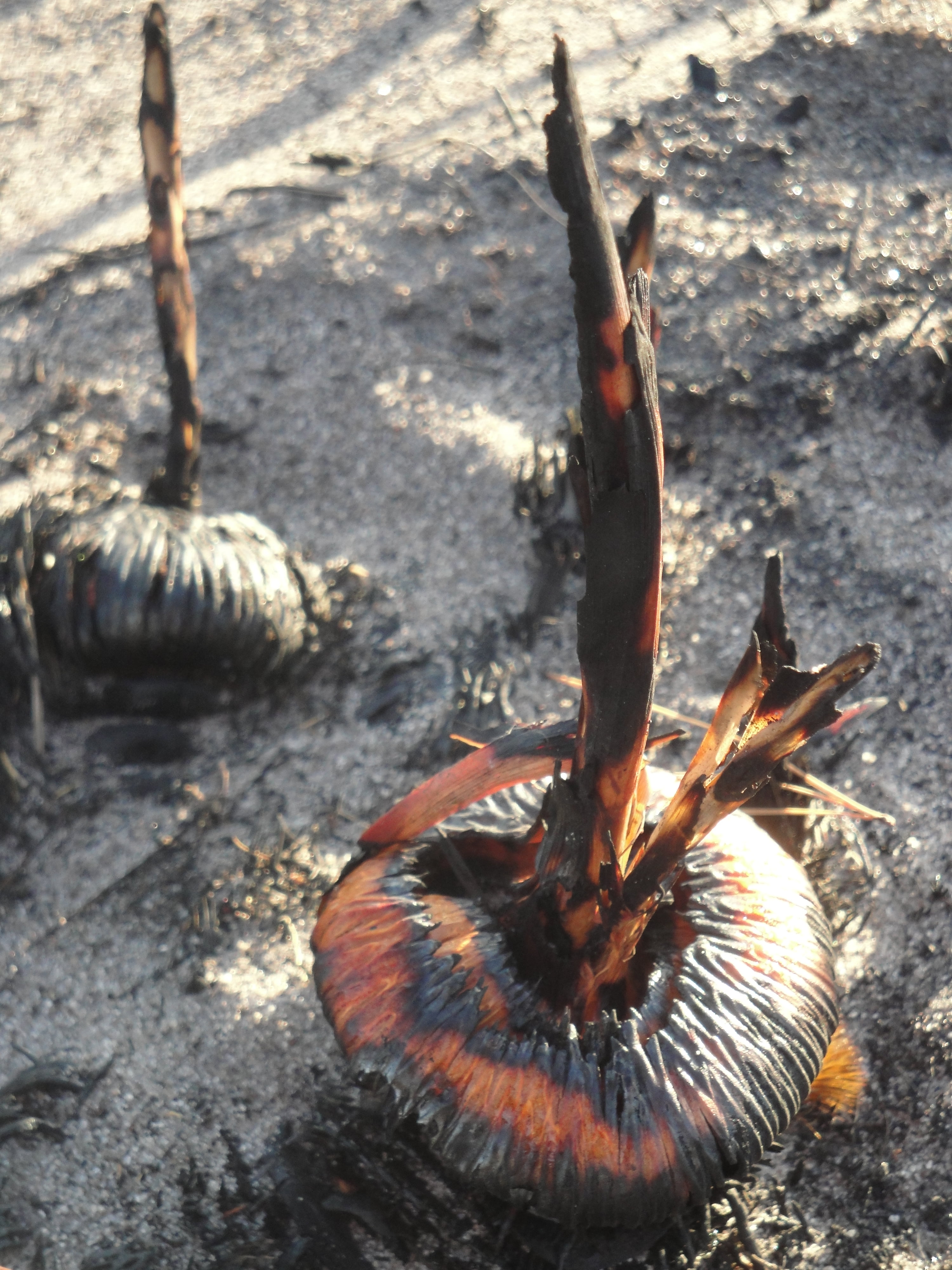 Roasted in a fire, these Watsonia corms have sustained humans from the earliest times – they chew like sweet potato & taste like chestnuts. 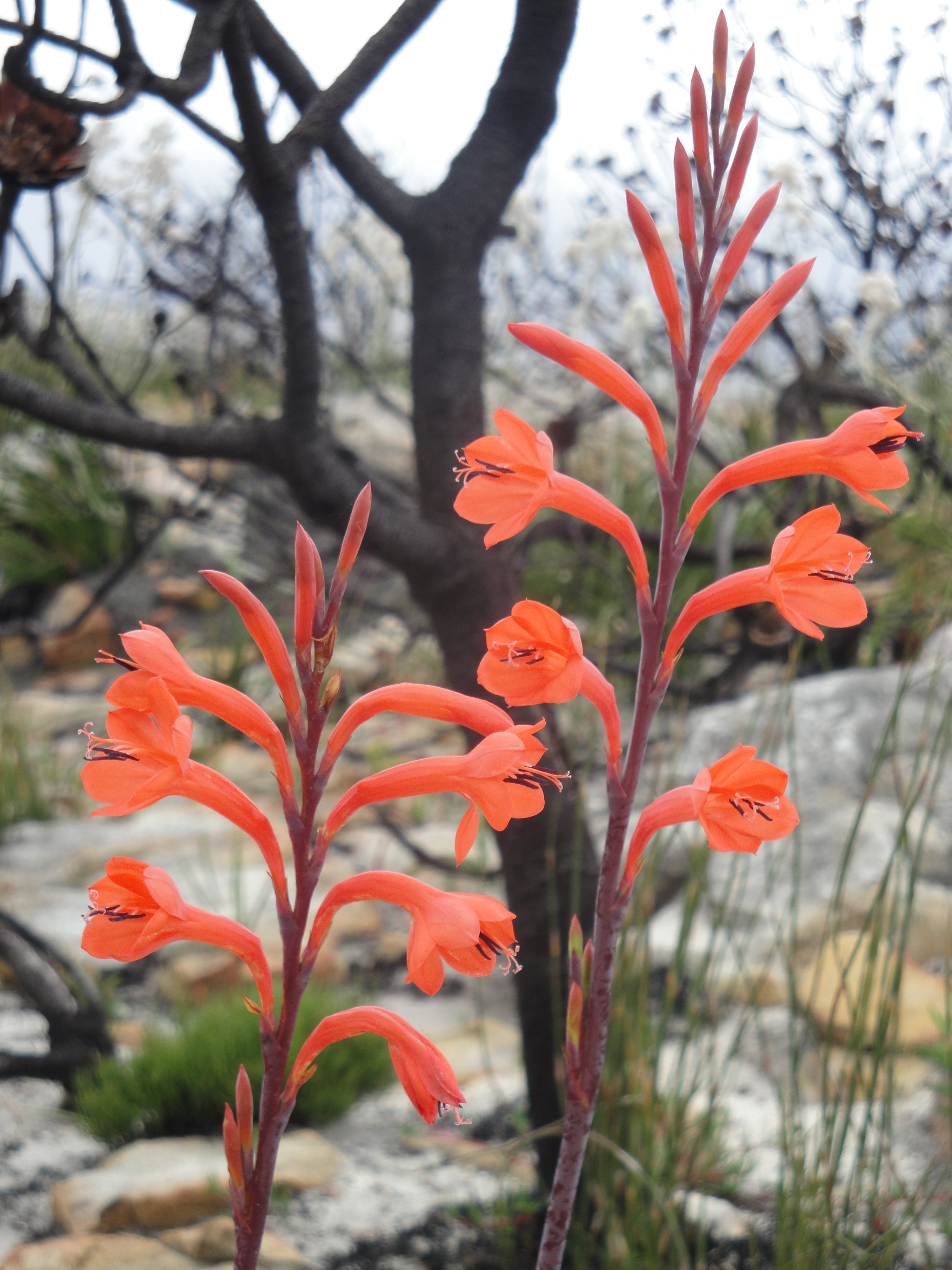 The more familiar side of a Watsonia with its trumpet-shaped flowers of red, orange, white or pink.

It’s a kind of Iris called a Watsonia. You may have some in your garden. I like to make the outrageous claim that this plant – or at least several species of it – is the most significant plant in the history of humankind. Oh, I know you’re saying “but what about grasses? Or wheat? And corn?” But we’ve been eating Watsonia corms (a kind of bulb wrapped in a fibrous husk) for hundreds of thousands of years, long before we ever made it to Australia or the Americas let alone discovered the joys of baked wheat and fermented hops.

It’s called an Uintjie in Afrikaans – a little onion – and they have a nutty taste after being boiled or roasted. Common in fynbos and prolific after fire, their starchy, edible reliability became so important that Khoisan population size and distribution was largely dictated by the availability of Watsonia and other edible irises such as Morea and Gladiolus.

There’s not much else to put in the foraging sack. A handful of bushes yield small red berries – the Tortoise Berry (Chironia baccifera) and the Prune Bush (Osyris compressa) for example – but I’ve tried them and they are all horrible but apparently not toxic. 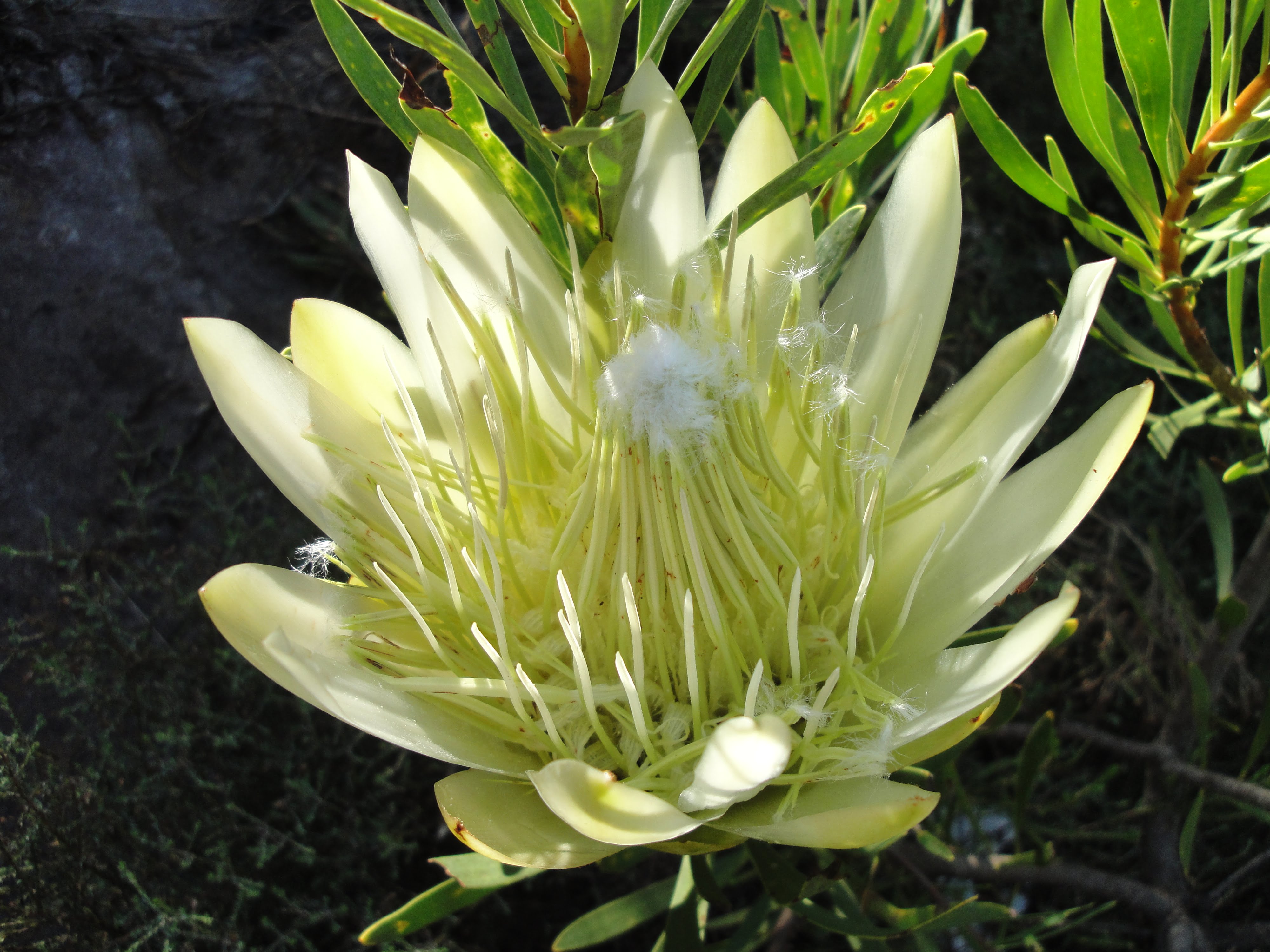 A pure white form of a Sugar Bush but they are usually pink or red; turn the flower upside down for a free sugary drink but mind out for bees.

But fynbos has a couple of big players in the beverage industry: the most obvious is Rooibos (Aspalathus linearis) – the famous caffeine-free bush-tea that grows in the Cederberg Mountains north of Cape Town. But in the days before commercial sugar cane came to South Africa, the stuff to sweeten our tea came from Proteas – specifically, the Sugar Bush (Protea repens). Wait for a cool morning in March or April when they are flowering and then turn the flower-head towards your cupped hand. Sticky sugar water drains out, as sweet as a modern fizzy drink. Collect enough of it and boil it into a syrup and now you have sugar whenever you like.

We can make coffee too: grind the nuts of another Protea, the Wild Almond (Brabejum stellatifolium), roast them and voila: a steaming cup of fynbos coffee. Just remember to first thoroughly wash the crushed nuts to get rid of the cyanide – a couple dozen raw nuts will kill you.

Which brings us to medicinal uses. Now fynbos is in the Premier League.

You can experience it for yourself as soon as you step into fynbos: the scent of honey, lemon, roses and straw fills the air as you brush against the bushes around you. It’s a short jump to find a plant whose leaves smell like Dettol (Salvias for example) and plonk it in a cup of hot water for a medicinal tea. And sure enough, Salvias soothe abdominal cramps and indigestion. 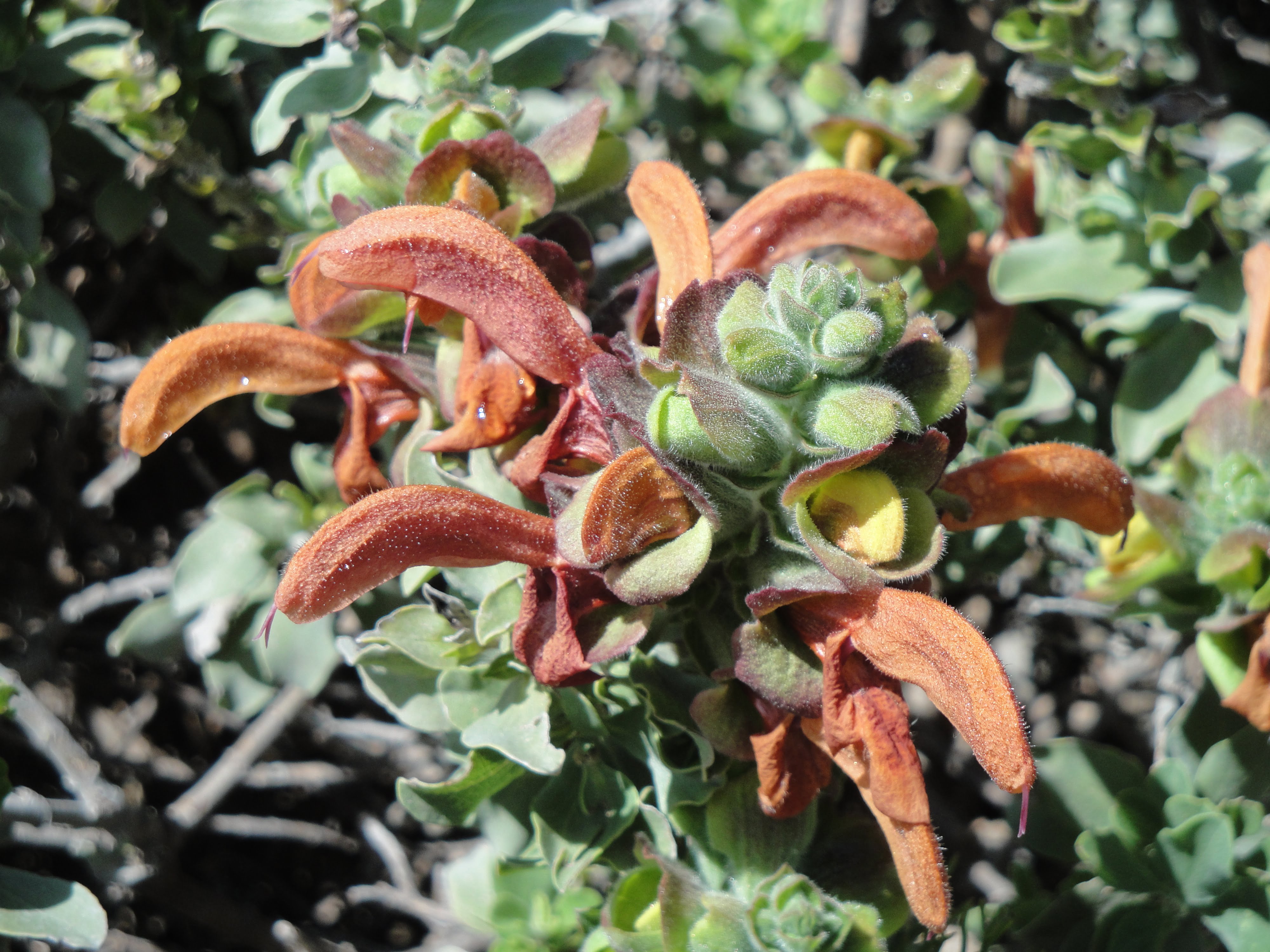 With leaves that smell reassuringly hospital-like, indigestion-soothing Salvias are easy to grow in a sunny garden.

But the thing that has always intrigued me is not so much the medicinal qualities of the plants – after all, aspirin and quinine came from tree bark – but how these qualities were discovered.

How did they deduce that the root of Arctopus echinatus treats venereal disease? Or that the leaves of Cape Scabious (Scabiosa africana) can be dried and powdered for a baby’s talcum powder? And that Renosterbos (Elytropappus rhinocerotis) could expel intestinal worms? 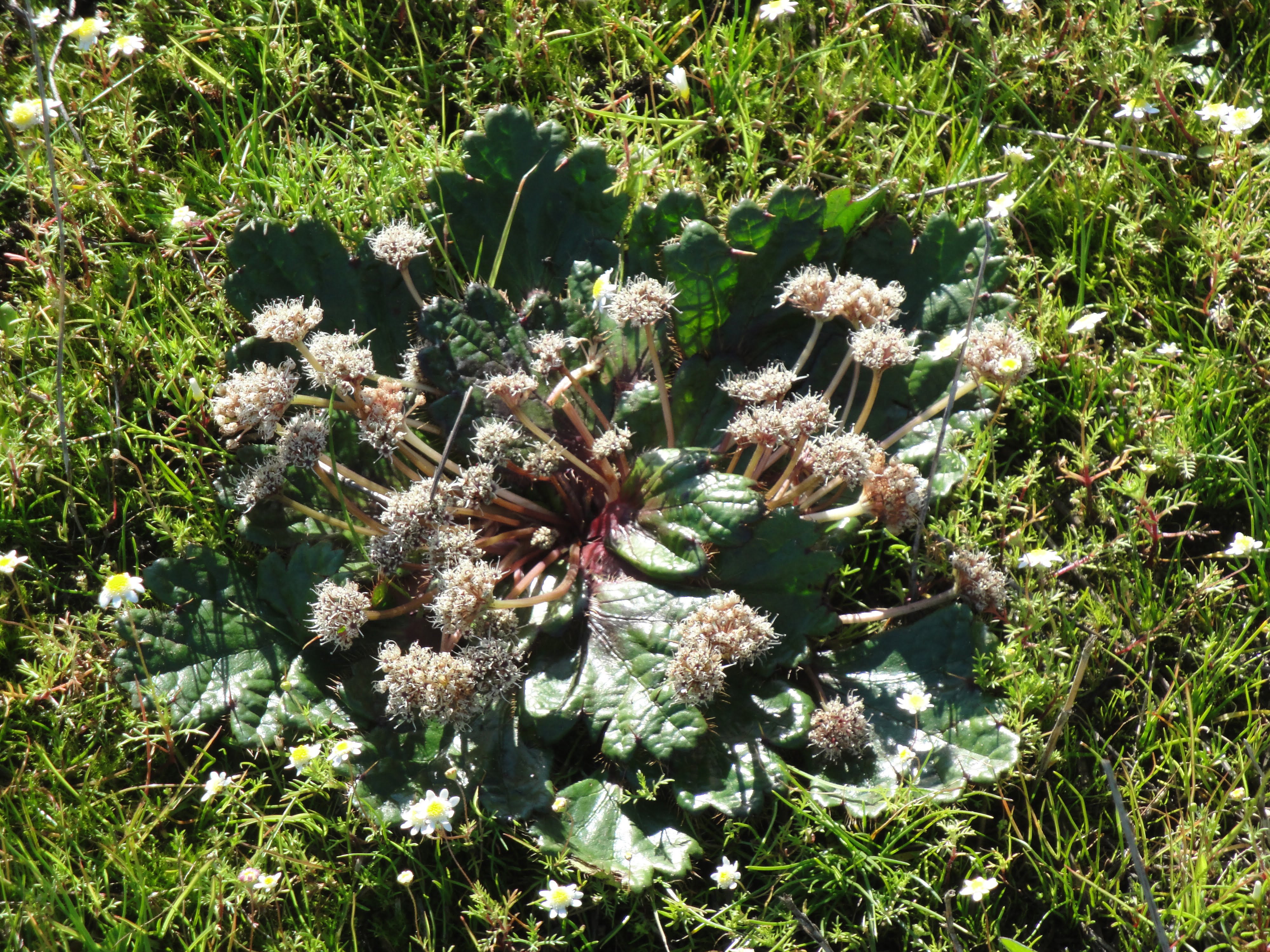 Hard to believe that the Platdoring – renowned for treating syphilis – is actually a member of the carrot family.

Trial and error? Sudden insights? Who knows, but whatever it was it has left us with a natural pharmacopeia with just about every ailment covered. Cancer Bush (Sutherlandia frutescens) reduces nausea and promotes the appetite of cancer sufferers; Agapanthus leaves (another plant you may have in your garden) were used as wound dressings and its roots yielded a powerful medicine used to aid childbirth – all of which raises another question: how effective were these potions, syrups and salves?

It’s easy to dismiss them as archaic folk cures but Cancer Bush contains active compounds that are recognised anti-cancer, anti-viral and anti-diabetic agents; the sticky gel of Aloe ferrox is bursting with healing amino acids; and the fleshy leaves of Pig’s Ear (Cotyledon obiculata) – yet another plant in your garden – contain cotyledontoxin which acts as a central nervous system depressant and was used to treat epilepsy. 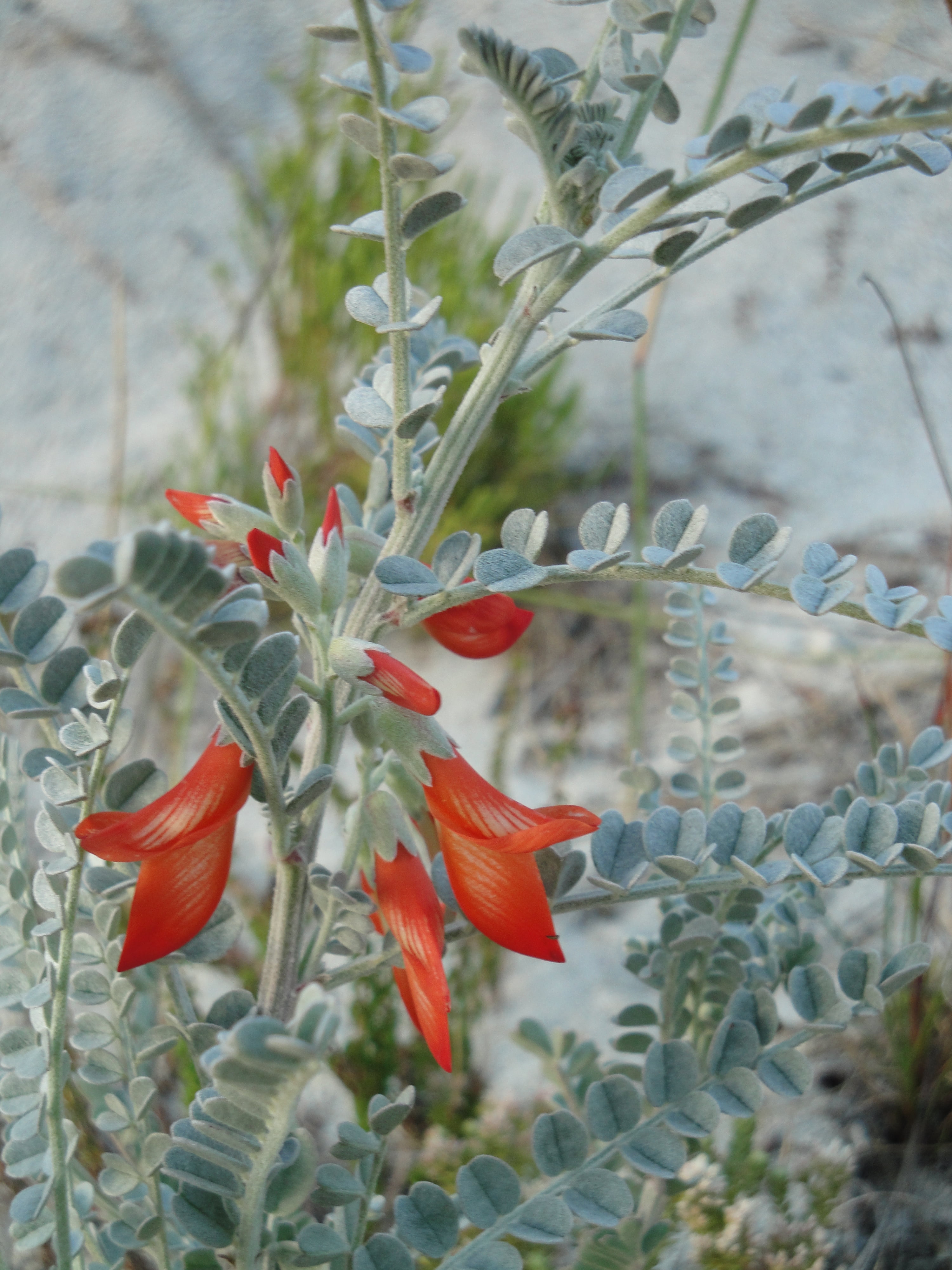 Modern medicine could do worse than to pursue research into Cancer Bush; it really does contain anti-cancer compounds.

So the list continues and their impact still resonates today. Chances are you drink Rooibos tea (good for the heart) and if you put on a bit of perfume now (well, perhaps not all of you) there’s probably geranium oil in it, distilled from commercial plants whose origins lie in the geraniums that still grow wild on Table Mountain.

Fynbos plants are woven into the fabric of the Cape’s people – often quite literally. The ubiquitous Restios (tall, rigid reeds) were fashioned into pack-up-and-go shelters by the Khoisan and later provided the roof thatching for Cape Dutch houses. We once slept on thick wads of Helichrysum patulum or Kooigoed (‘Good Bed’) – its soft furry leaves contain a natural insect repellent – while our hats were fashioned from the long tough leaves of Bergpalmiet (Tetraria thermalis). Linen cupboards on the other hand were perfumed with the magical smell of the Kukumakranka fruit (Gethyllis afra), an Amaryllis and one of the very few plants to retain its original Khoisan name. 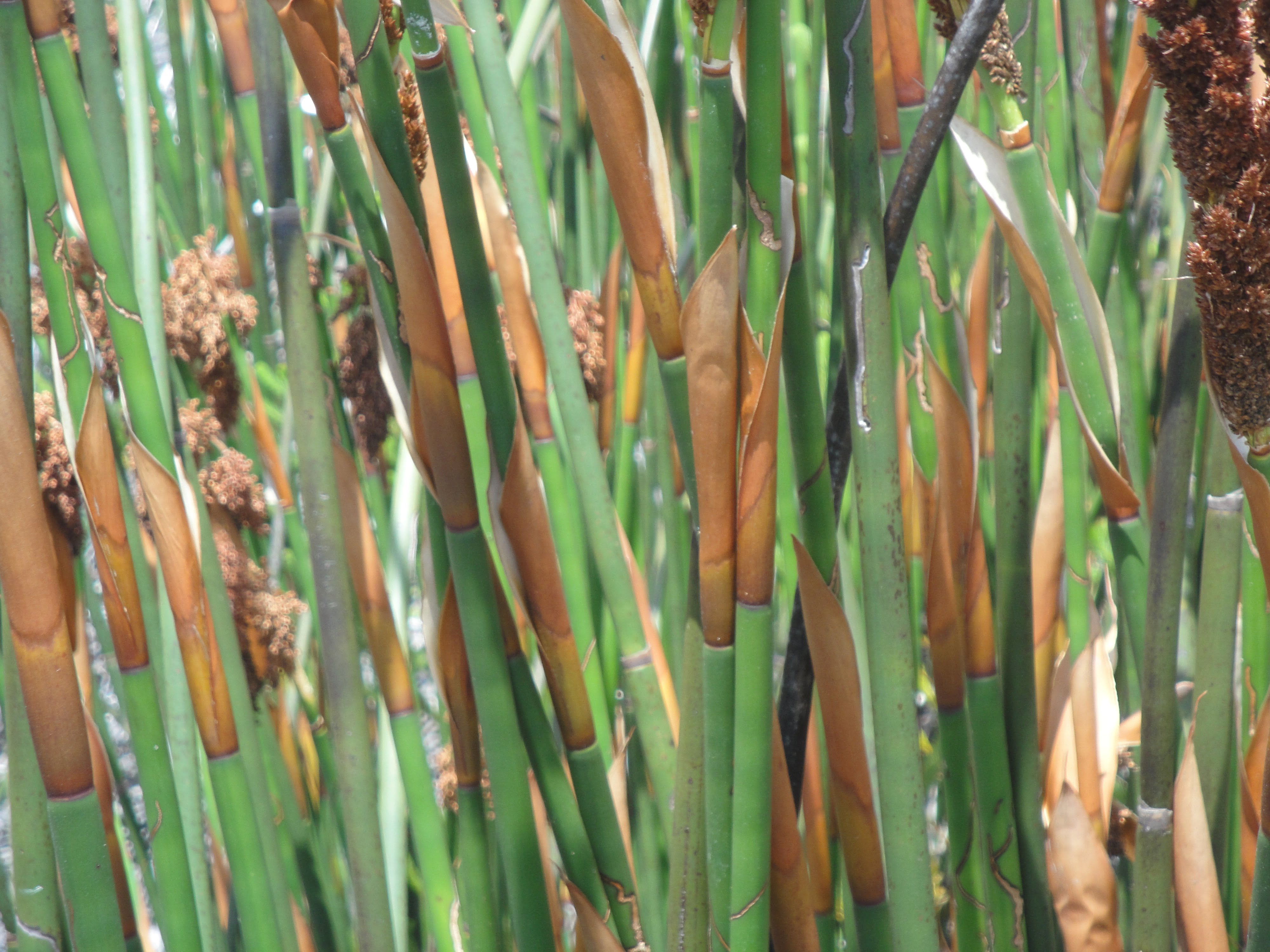 Found everywhere in fynbos, Restios were a natural candidate for flooring & thatching material & were also used to make brooms.

And these are the obvious ones. Scratch a little deeper and you’ll find that the roots of various Spotted Aloes produce brown or yellow dyes while the leaves of the Waboom (Protea nitida) – when boiled with a rusty nail and a bit of sugar – give you black ink. 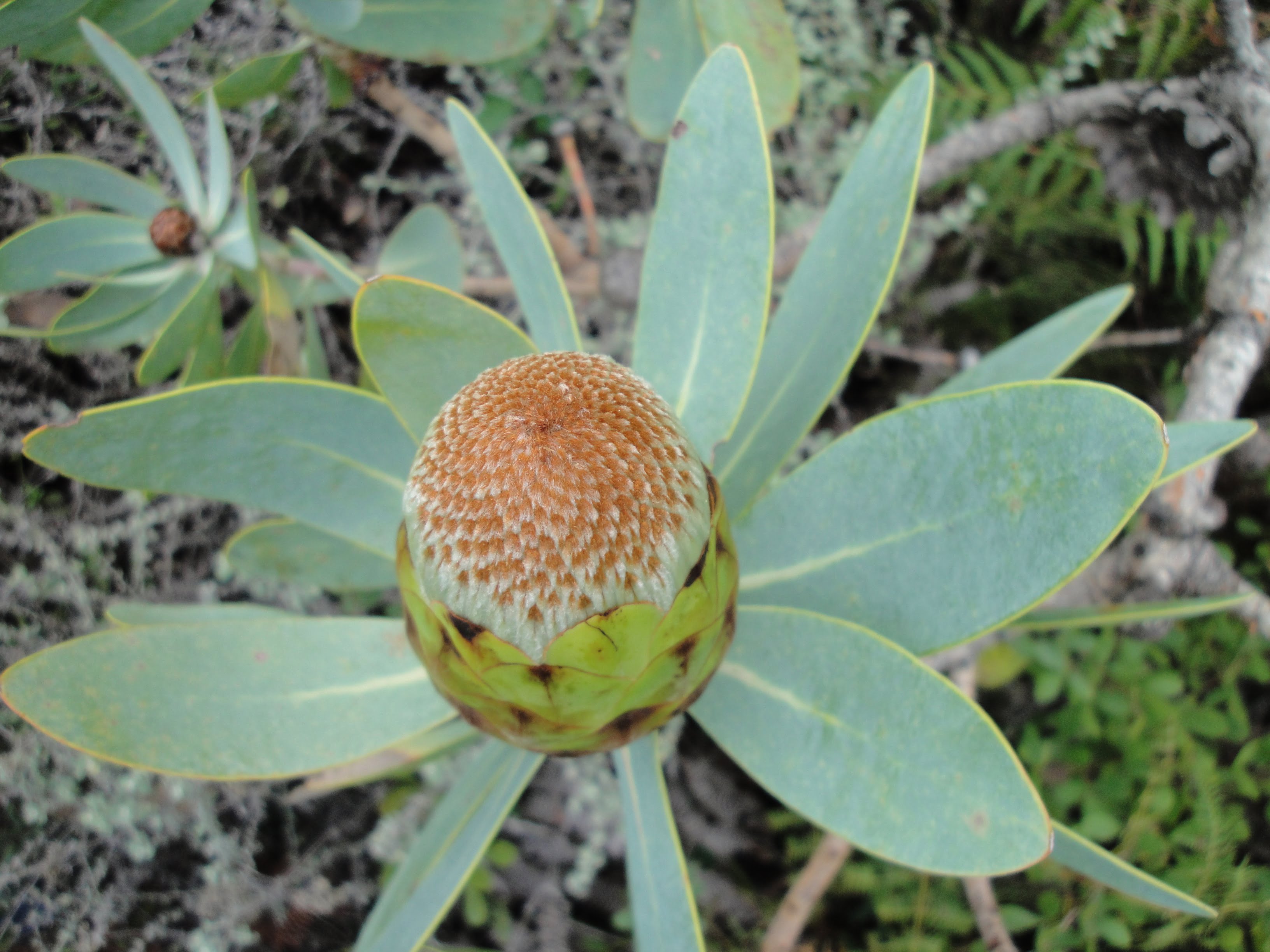 Of all the discoveries in fynbos, the ink-yielding quality of Waboom leaves is perhaps one of the most obscure.

It’s clear we’ve tried everything over the last few hundred thousand years or so: the leaves of Wild Marijuana (Leonotis leonurus) were smoked (don’t get too excited, there’s nothing narcotic about them); strips of bark torn from the Bootlace Bush (Passerina corymbosa) were twined together to make rope; the lemon-scented oils from the rubbed leaves of Coleonema album make an effective hand sanitiser while the hard, cone-knobbed branches of Leucandendron dubium gave this protea its Afrikaans name: Vuurslaanbos – Fire Beater. 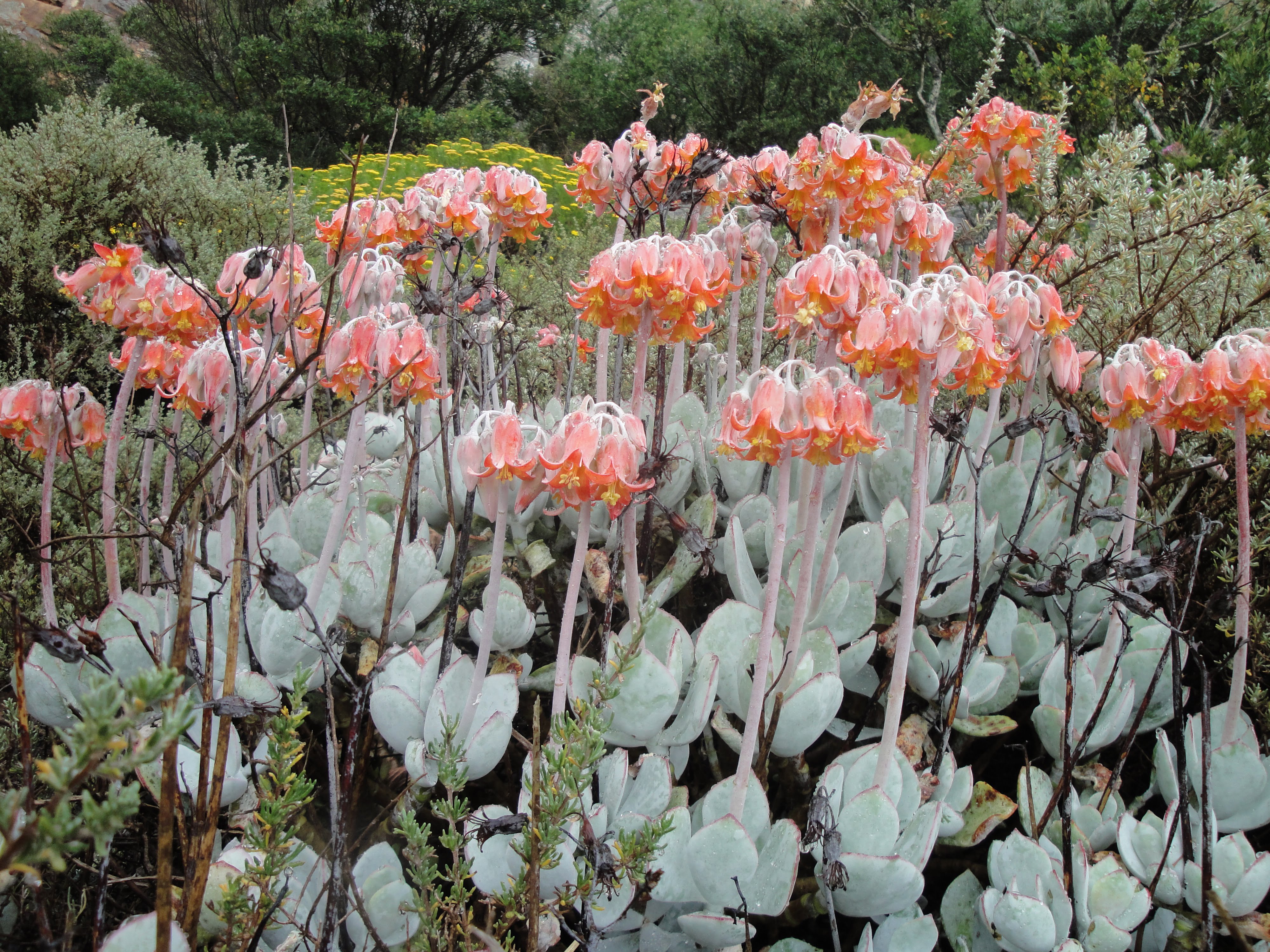 Used to treat epilepsy, the juice from a warmed-up Pigs Ear leaf was also an effective cure for ear & toothache.

Needless to say, such uses of fynbos plants have almost entirely disappeared, swept aside by modern medicine, global agriculture and plastic. And although much of the old knowledge has been recorded in several excellent books (see below), the traditional use of fynbos is almost at an end. It’s probably a good thing; fynbos would not survive the pressures of large, modern societies and besides, who really wants to go hiking up into mountains to dig up wild ferns for a headache?

But as the world begins to push back against the tide of consumerism and convenience, maybe there will be a place for these plants again. After all, our modern medicines are fast losing their efficacy and unhealthy nutrition reigns almost unchallenged. But perhaps new cures lie out there, super-foods, untapped calories and sustainable resources. How much longer will it be before we head back into the mountains with sacks over our shoulders and digging sticks by our sides? Maybe sooner than we think.