A Winter Hike on Table Mountain 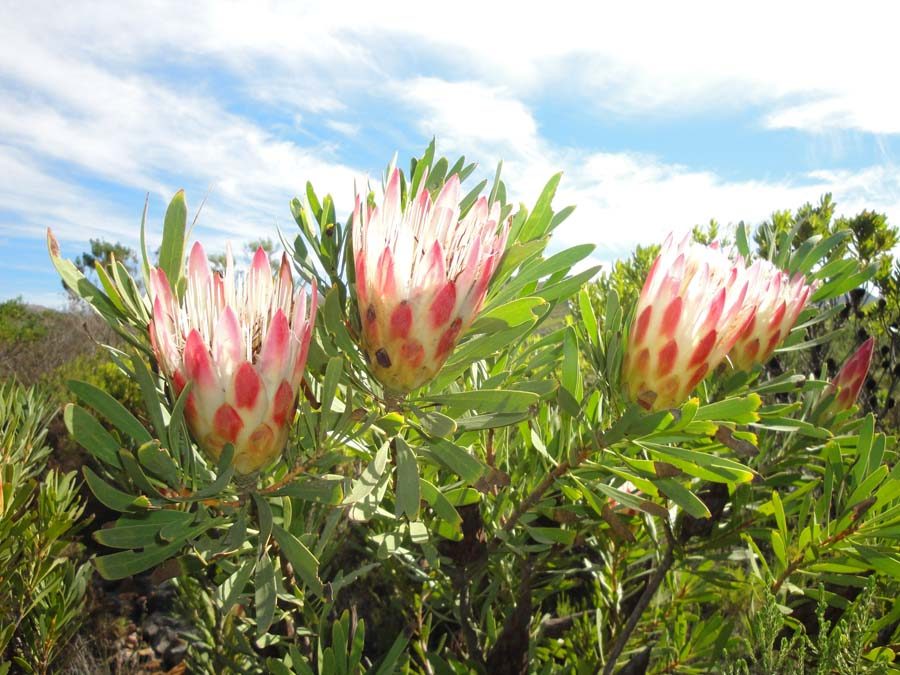 Time to stay at home and put the boots in the cupboard?

Quite the opposite: not only does the fynbos burst into flower in winter but the intervals between the rain-bearing cold fronts couldn’t offer better weather for hiking – cool, clear and full of mild winter sunshine.

You don’t have to go far for the flowers either: start off on Table Mountain Road close to the Lower Cable Car station. The squeaky-wheelbarrow calls that you hear are Cape sugarbirds and they just love winter: Sugar bushes (Protea repens) are in full, nectar-dripping flower right next to the road and if there is ever a bird with a sweet-tooth, it’s a sugarbird. Now confined to Table Mountain’s lower slopes, these large protea bushes once grew thick on the Cape Flats and sustained a local sugar-making industry. 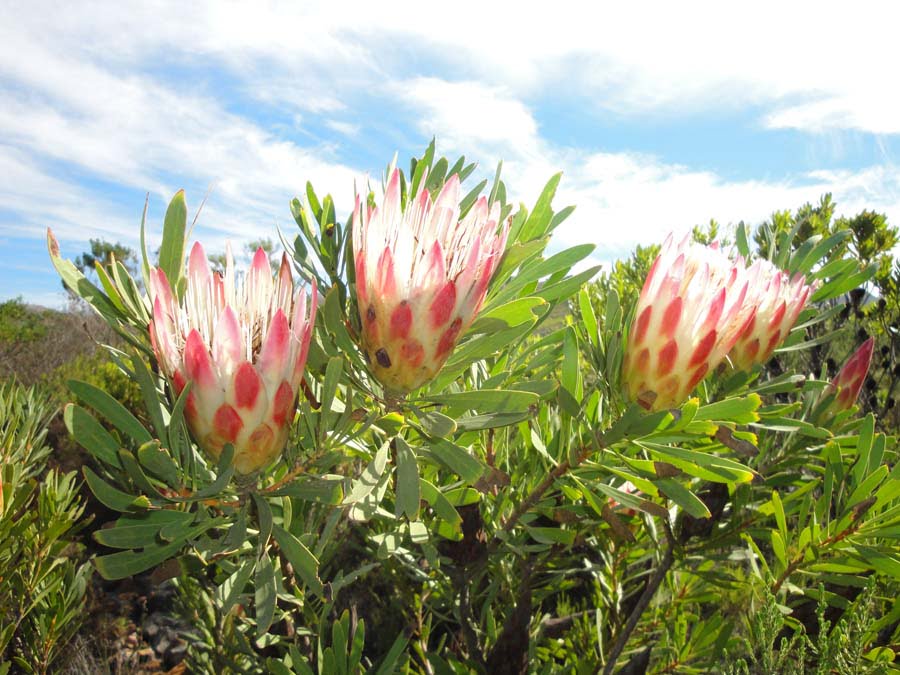 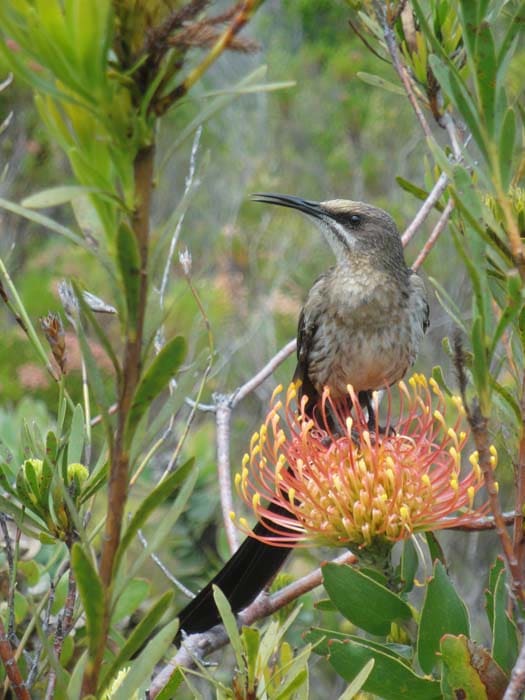 Male Cape sugarbirds spend much of their day chasing rivals from nectar-rich proteas such as this pincushion.

A little further up the slopes of Table Mountain grow squat, gnarly trees with blue-green leaves. You can see them on the lower sections of many hiking routes up Table Mountain. In June their fat creamy flowers light up the mountain, attracting bees and beetles. Wagon Trees or Wabooms (Protea nitida) once grew big enough to provide timber for wagon parts. And its uses don’t stop there: the tannin in its bark was used to cure leather and if you boil a handful of leaves with a rusty nail and a bit of sugar, you get ink. (I don’t know how they worked that out.) 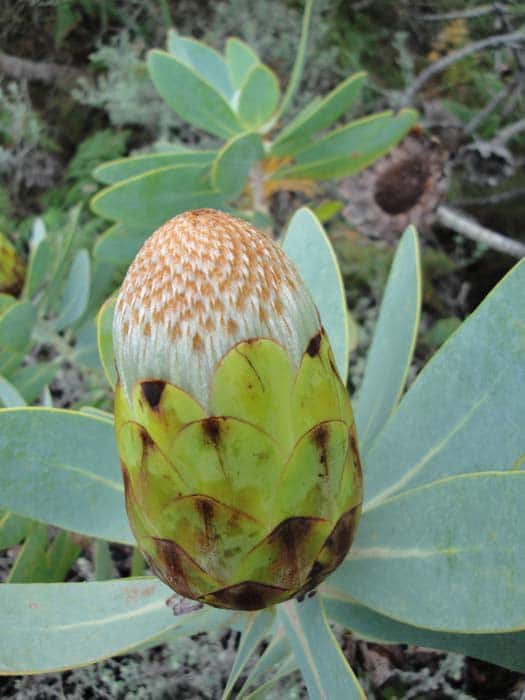 A Waboom flower in bud; this protea once provided timber for the early settlers.

By the side of the road, small pink, yellow and purple flowers unwrap themselves as the sun warms them up. Many have leaves like clover but they are various Oxalis species, also known by their old name of sorrel. High in vitamin C, these plants were eaten by sailors in the days of sail to ward off scurvy. Some species are used still used today to flavour local stews. 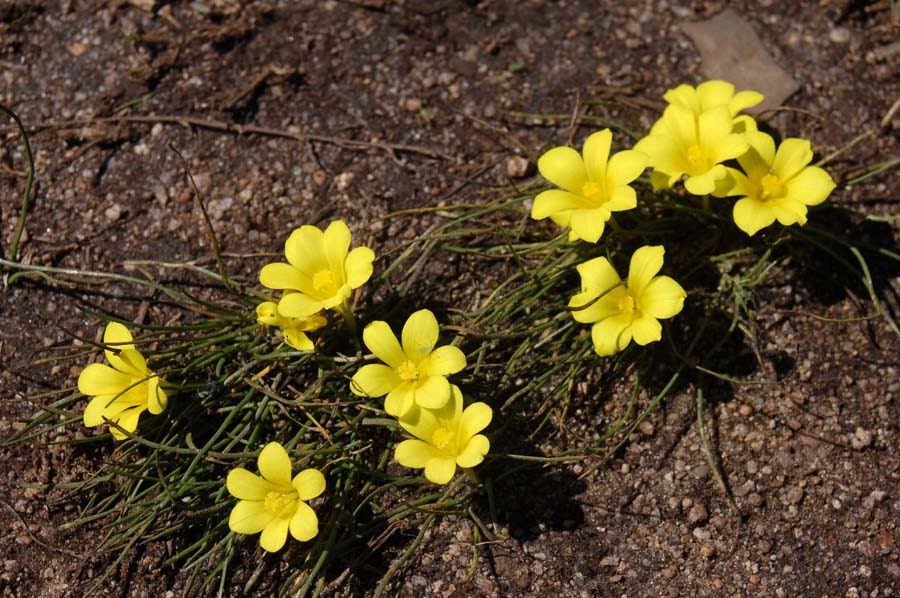 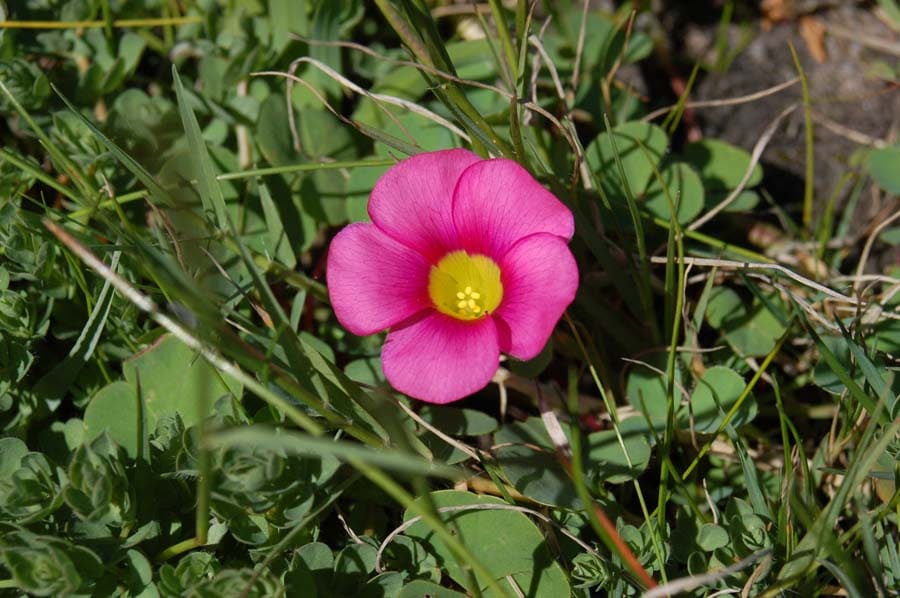 There are more floral surprises up on top of Table Mountain. A thick wall of flowering Aloe arborescens sits close to the Upper Cable Car station. It’s South Africa’s equivalent of Aloe vera (a North African species) and boasts similar medicinal properties. But the aloe’s bright red flowers aren’t the only ones around up here: several heather (Erica) species are in flower at the moment too as are delicate blue Lobelias. Hike into the more sheltered and wetter interior of the mountain and you’ll see stands of orange-flowered irises (Chasmanthe) and clusters of white flowers on sweet-smelling buchus from the Citrus family. 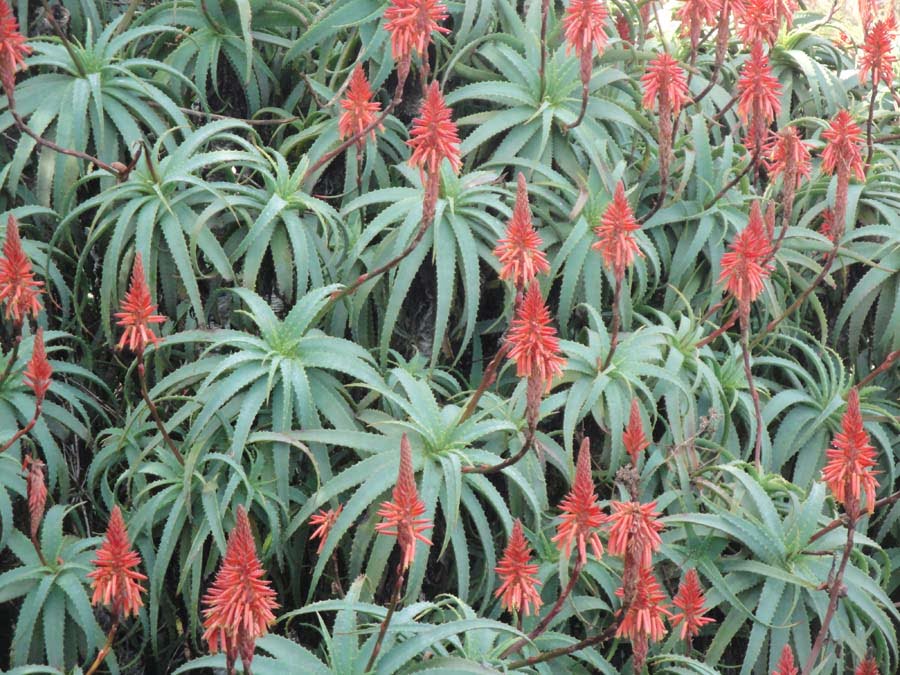 Why are there so many flowers in winter? The answer is partly because of our summer fires.

The Cape mountains have been burning for two million years. Without fire, there is no fynbos. Regularly spaced fires rejuvenate the environment, clearing away dead plant material and returning it as nutrients. Consequently, every plant on these mountains can handle fire and use the mechanics of fire as part of their life cycle: heat cracks open hard seedcases while chemicals in smoke such as ethanol and ammonia prompt buried bulbs to germinate. 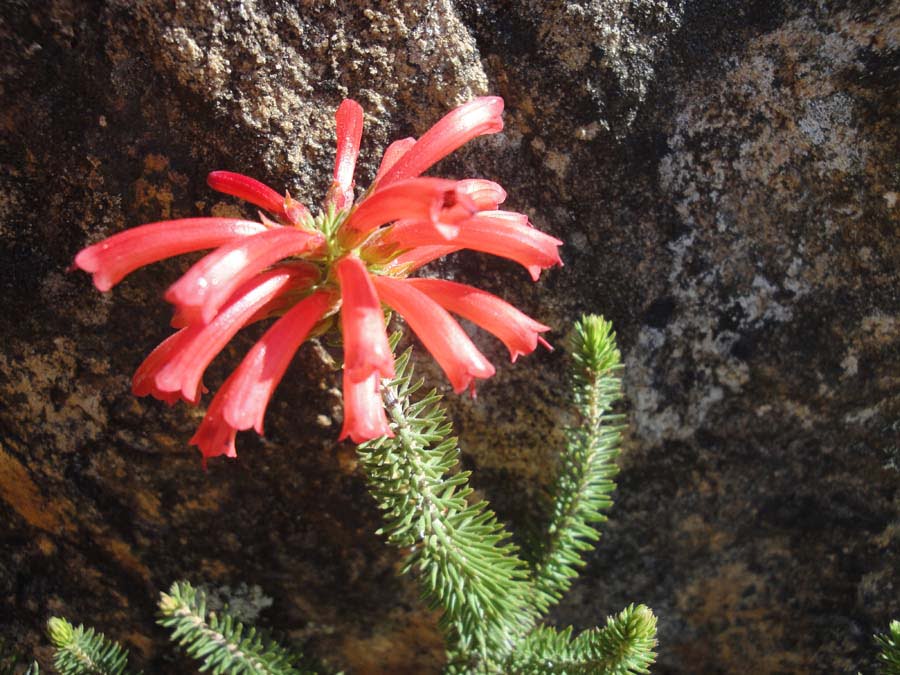 Erica abietina has sticky flowers to deter opportunist insect raiders & so preserves its nectar for its long-beaked sunbird pollinator.

But animals don’t deal with fire so well. So they adapt. Mountain birds like sugarbirds and sunbirds breed in winter to ensure their young are ready to fly during the summer fire season. The fynbos responds by providing energy-rich sugar for the birds over winter, receiving of course a pollination service in return.

And not every plant wants to go through the whole tedious process of being burnt to the ground and then having to grow all over again. Geophytes – plants with bulbs like irises and hyacinths – sit out the summer fire-season by remaining underground; cooler and wetter weather is what makes them grow and flower!

So don’t be put off from going on a Table Mountain hike in winter. The mountains look beautiful at this time of year and are home to tumbling waterfalls and frothy streams. Its lower slopes are bursting with flowers and breeding birds, and winter’s crisp-edged air makes the views even better.