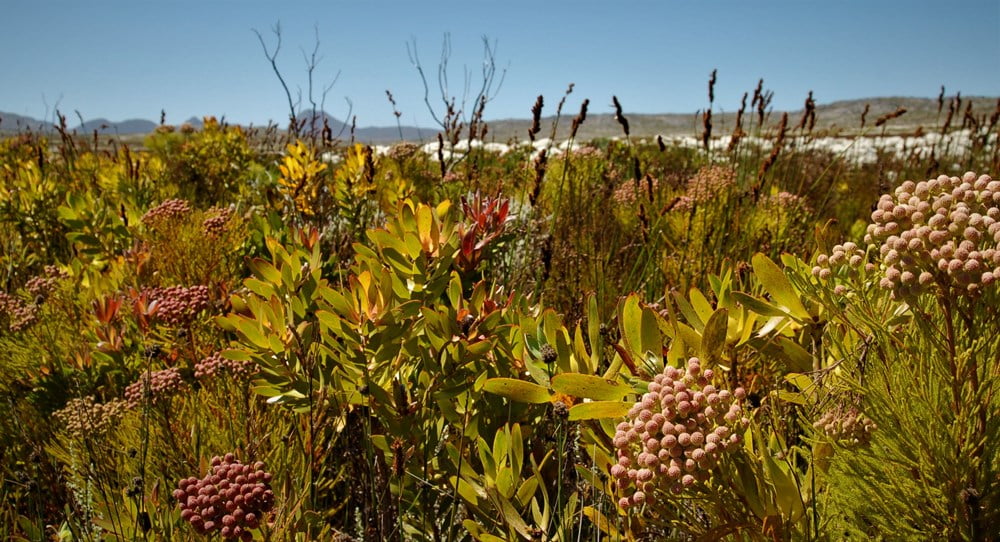 You know me and my boasting: “Table Mountain has more plant species than Sweden!” “There are 175 times more heathers in fynbos than in Scotland!!” But a thought occurred to me and probably to you too: How? How come there is so much floral diversity in fynbos. And while we’re at it, how do we account for the Cape’s diversity in virtually all aspects of the natural world: the modestly sized Cape Peninsula, for example, has more butterfly species than does the British Isles and is home to one of the world’s richest arrays of coastal limpets.

And then: Why? What’s the reason? Why be so bio-extravagant in a wind-scrubbed land of drought, flood and fire? 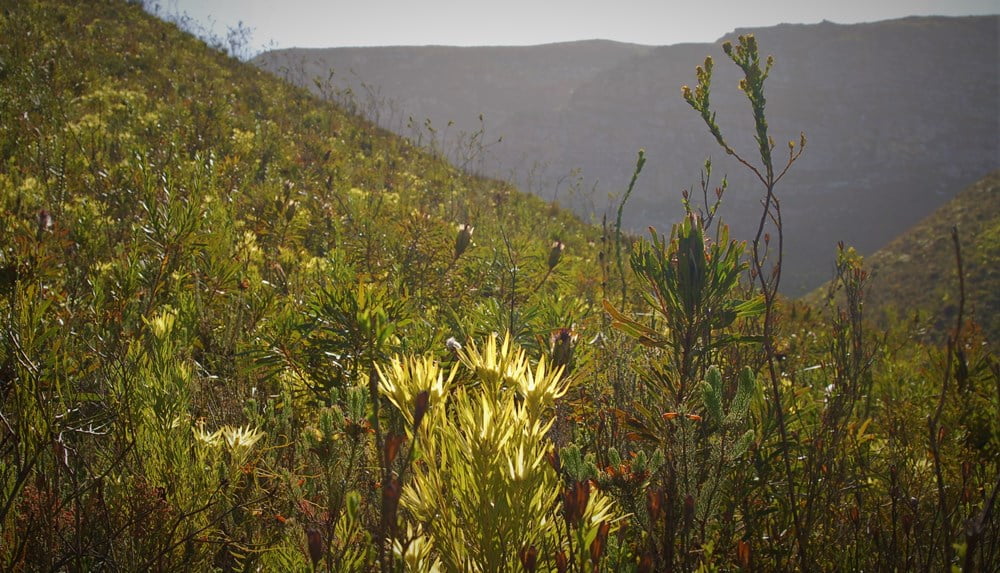 Turns out there’s a neat ‘formula’ for the How part – with a couple of local nuances. As for the Why – well, I guess there are several interpretations and I’ll venture mine. First though, to get to the core of how biodiversity is driven, how nature is encouraged to create more and more species, you’ll need to put on something warmer and take a position at either the North or the South Pole.

Take a look around you. Now, I’ve not been to either pole but I am confidently predicting that you are not exactly overwhelmed by the diversity of flora and fauna in front of you. And with frostbite kicking in, you’d best start moving. Head for the Equator.

It’s no surprise to see biodiversity increasing as you reach the reefs and rainforests that live on and around the Equator. About half the world’s plant and animal species live in this belt and to understand why, you need only remember three words, and to make it easy, each begins with the letter ‘S’.

Sun: the more solar radiation (sunshine) you get, the greater the diversity. Stability – the more evenly ranged the temperatures throughout the year, the more biodiversity there’ll be. Size – the larger the available habitat, the more plant and animal species you will find; increase an area of habitat by ten times and you’ll double the number of species.

Let’s apply the formula to the Cape region. Sun? No problem: the much-mentioned Cape Peninsula get bright sunshine for three-quarters of the year. Stability of climate? Nowhere else in South Africa is the climate more evenly poised than the temperate south-western Cape. And size? While admittedly not on the scale of the Amazon Basin, the Cape Floral Region – of which fynbos is the largest component – still covers an area the size of Portugal. And besides, it’s not as simple as the flat 10 000km² (4000 miles²) denoted on the map. Nearly all of the Cape region is rampant mountain country, bucking up and down like a wild horse; scale here is often provided on a vertical rather than horizontal plane. 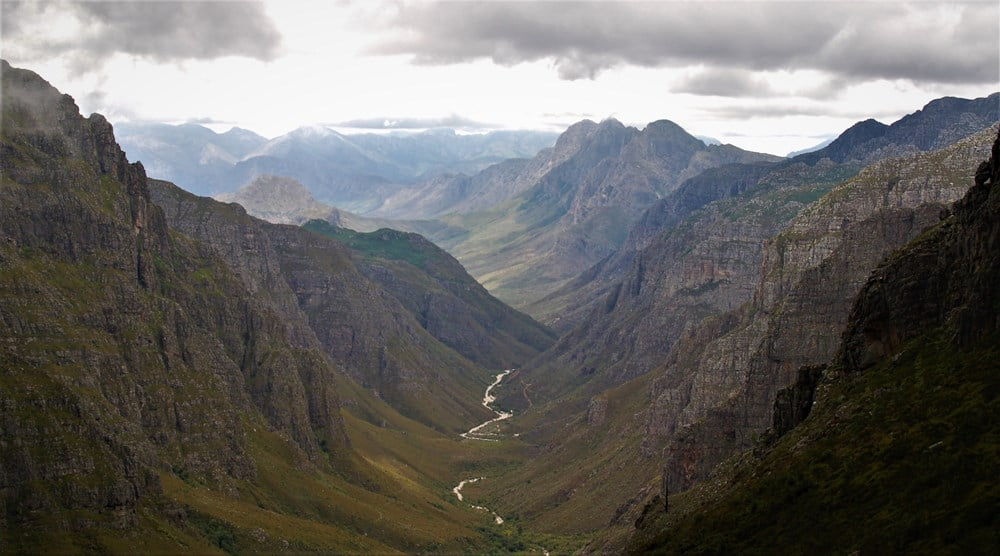 Typical mountain country in the Cape – rainfall & geology are all different across the scene.

Then we have a couple of local peculiarities that spice up the bio-mix even more. Firstly, the Cape’s wild mountain topography throws up vastly different areas of geology, rainfall and exposure to climate, each micro-habitat then giving rise to specialist, often unique species. Drought-resistant shrubs occupy the sun-baked lower slopes of Table Mountain, for instance, while swamp-dwelling plants grow in cloudy wetlands at the top. 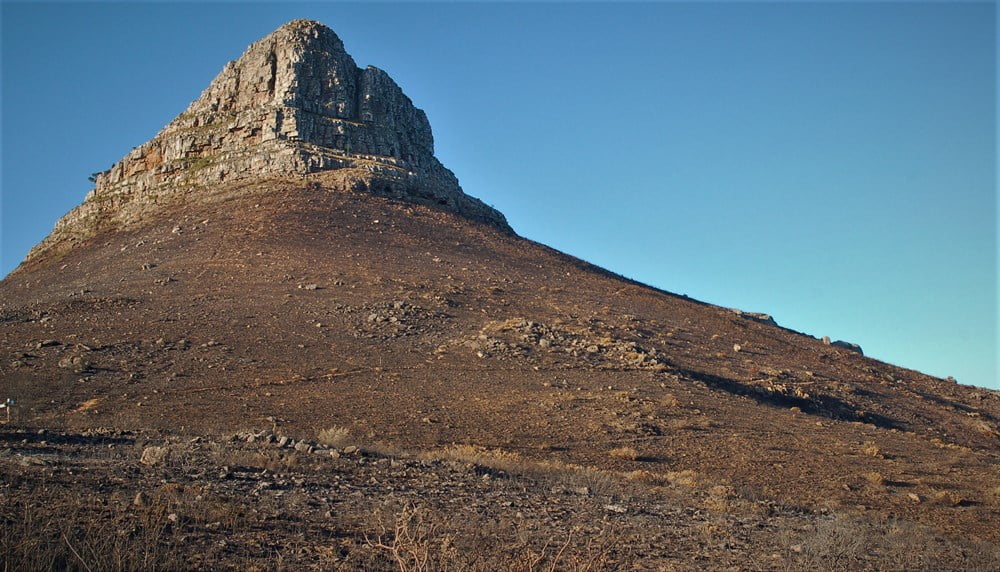 Fire-stripped Lion’s Head reveals its three rock types: shale at the bottom, granite in the middle & sandstone at the top.

And, to explain the second local factor, I need to let you in on a little secret. The reason I can confidently claim that these mountains have more plant species than Sweden or Canada or New Zealand and so on is that the Cape has not felt the icy crush of glaciers for tens – no, hundreds – of millions of years, unlike the other countries whose paucity of flora I refer to. Ice Ages wipe out entire biomes, effectively forcing a restart in biodiversity once the snow has finally melted. 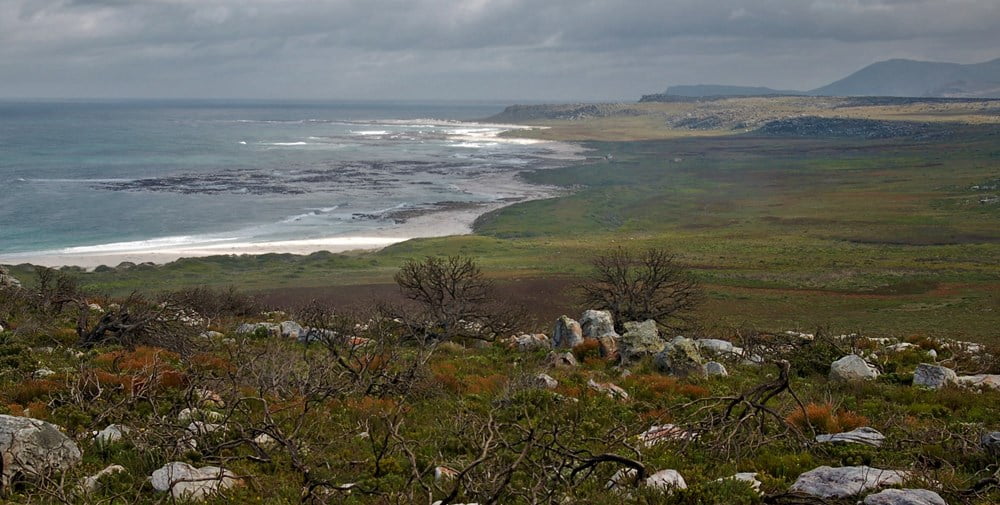 Older, higher sea levels & tumbled-down mountains mark the fynbos landscape but little has changed for tens of thousands of years.

So much for the How. As for the Why, let’s leave the theory side of things for inside and head outdoors to the mountains to see for ourselves. And if we’re looking for somewhere with off-the-charts bio-diversity then we may as well give a nod to the waving arm and “Pick me! Pick me!” of the Fernkloof Nature Reserve outside the coastal town of Hermanus.

Buffeted by a coastal climate, the mountains of the Fernkloof Reserve are especially rich in flora.

Famous for its springtime whales, Hermanus lies about an hour and a half’s drive from Cape Town and the Cape Peninsula. It’s worth noting that apparently little changes between the two areas. The geology and climate are the same as is the local phone code. But a botanist requires a new field guide as over half the plants are different. 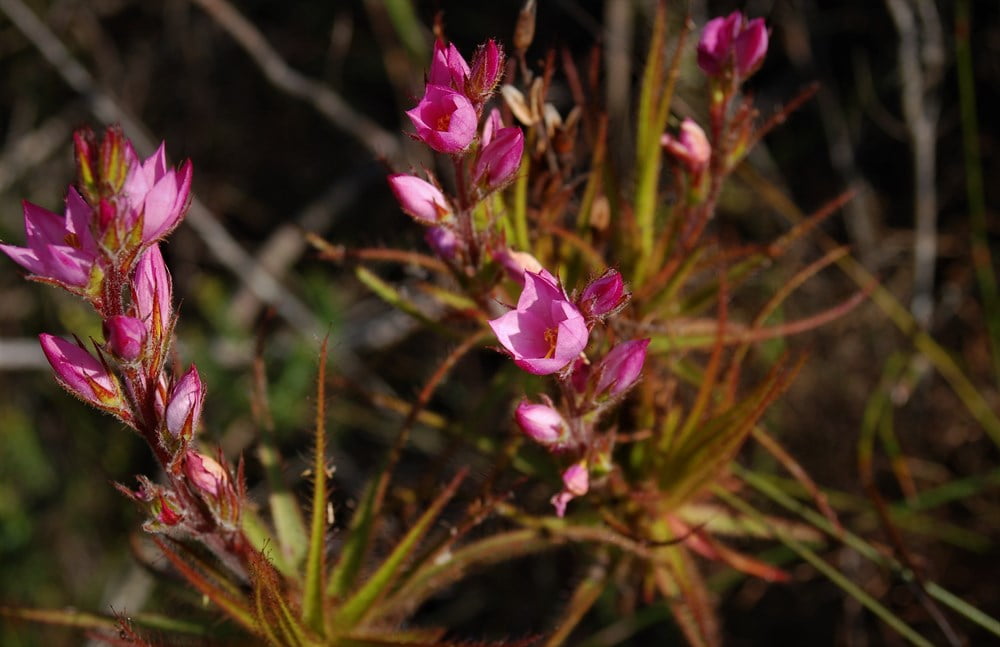 Found only in the region, sticky-leaved, carnivorous Roridula gorgonias is one of Fernkloof’s most sought-after plants.

Weighing in at 1800 hectares (4500 acres), Fernkloof packs in a mighty 1300 different plant species – more than … oh, you know where. Plants are everywhere: packed onto dry rocky slopes, crammed into wetlands, shoe-horned into the cracks between rocks. It’s especially rich in Ericas – heathers – with over 80 various species, double the number found in Madagascar (sorry – it’s difficult to stop) and the constantly changing tapestry of colour and form is sometimes numbing. Oh look – yawn – another new plant. 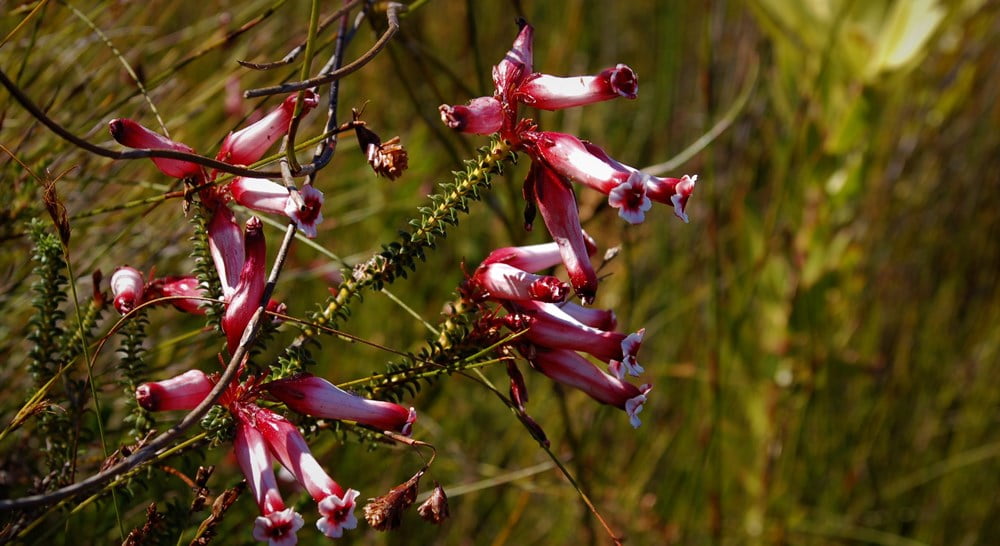 Erica aristata – the Pride of Hermanus – is even more localised, occurring only in these mountains.

But Why? Is there a reason for the richness? Should there be? Are we applying human emotions to the dispassionate juggernaut of nature, simply responding to local conditions, heedless of any plan or reason?

I think of it like this: a biome (fynbos, in this case) is best thought of as a complete organism. Its various plants are interconnected through fine roots and fungal mycelium, its different animal species function as the cogs on a giant gear box, all locking into each other and driving the entity forward. Bacteria permeates everything.

And although there is balance in the biome with everything nicely in tune with each other, we all know that stuff happens. And it’s happening right now, in the form of climate change. But it’s not like this is the first global catastrophe that nature has seen. To return to the gear box metaphor, I used to drive old land rovers in Botswana and I quickly learned that one didn’t necessarily have to have second gear. A big rev and some downhill and I could jump from first gear to third when second was jammed. Slowing down was interesting though.

Is bio-diversity that? The ability to lose components of your system and still be able to function – still survive, still move forward? A kind of insurance policy? The more you have, the more you can afford to lose. I have no doubt that fynbos will be affected by climate change over the next decades. Some plants and animals will go; others will thrive. In Fernkloof for example, the mainly moisture-loving Ericas face decimation in the years to come but the reserve is also home to hardy succulents and drought resistant plants. 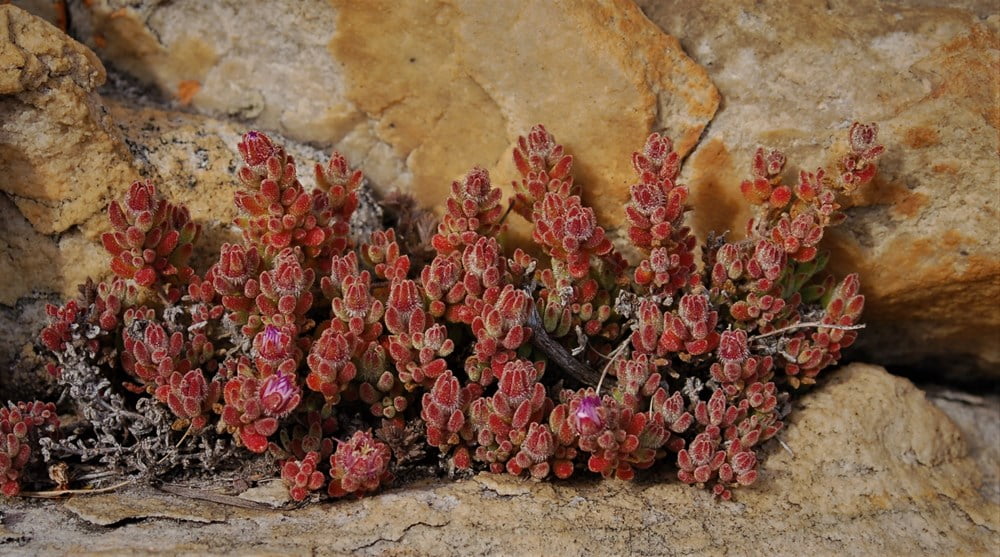 And these plants will then radiate into different species, driven by the sun, the local topography and so on, forever pushing into new niches and perpetuating diversity. My guess is that fynbos will continue to be around for a long time to come, not as we know it now, but it will survive. Strength through numbers.