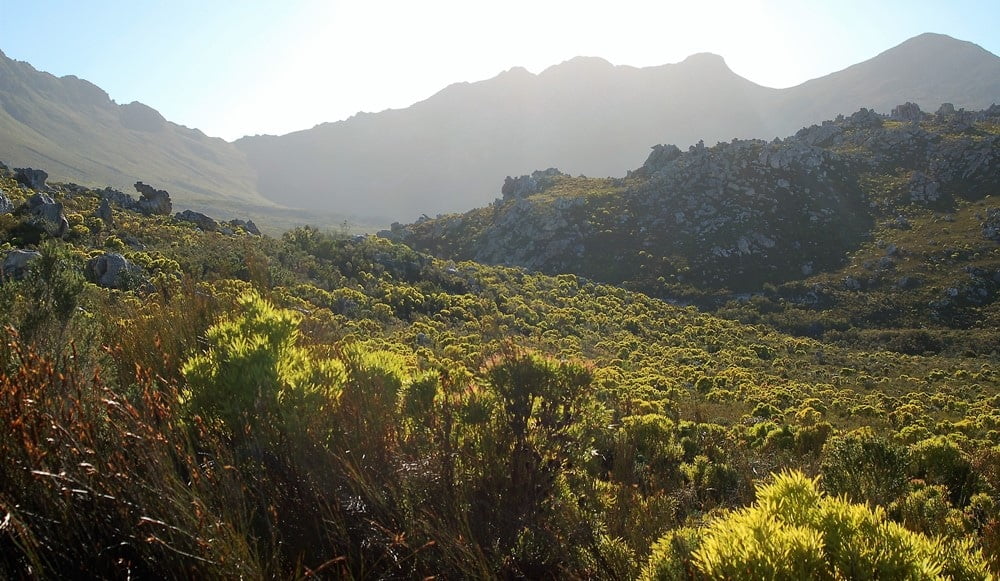 Let’s first get the bad news out of the way: identification of fynbos plants is not easy. There are, as you know, thousands of plant species in the mountains of the Western Cape and they come from many different families – some of which you know (like the Iris, Daisy and Pea families) and some of which you might not (Penaea and Brunia for example).

And to make things worse, although plant species change with bewildering rapidity as you walk through fynbos, the general appearance of the vegetation does not. Compared to rainforests with their diverse mix of huge trees and understorey shrubs, ferns and looping vines, the fynbos landscape – bushy and reedy – is pretty much the same whether you are hiking at 1500 metres or next to the ocean. 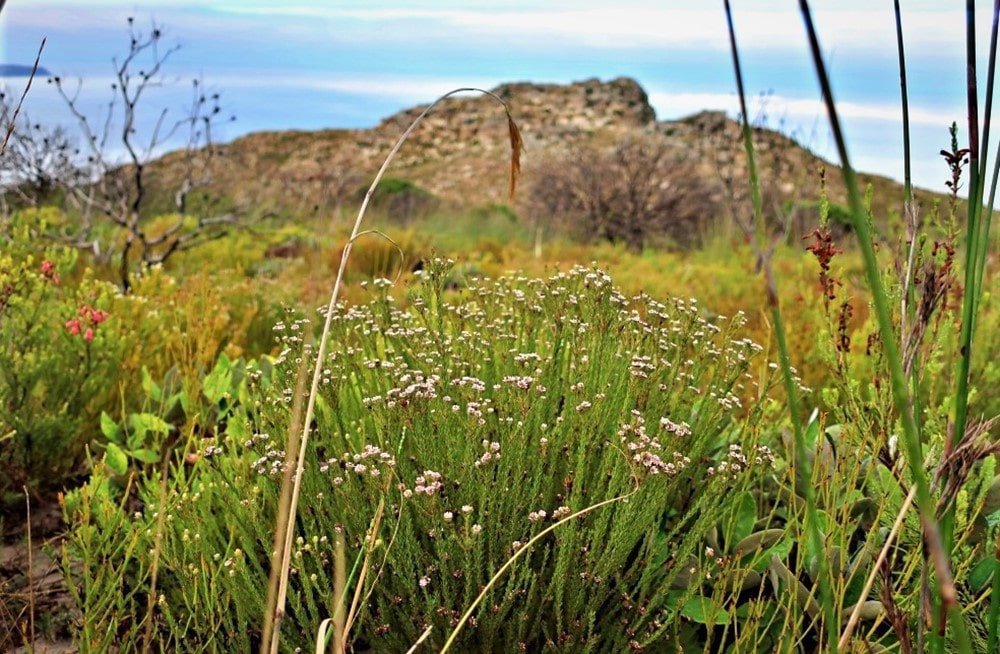 Fynbos has a reputation for floral diversity but it’s not always apparent at first glance; the changes in vegetation are often subtle.

Now the good news. Fynbos is the most studied vegetation type outside Europe; its floral extravagance has captivated naturalists for centuries and there are books, websites, NGOs, nurseries and clubs dedicated to just about every aspect of fynbos you can think of.

But first you start here.

FYNBOS IDENTIFICATION STEP ONE: MAKE SURE YOU ARE IN FYNBOS

It sounds a bit obvious but the natural environment in the Western Cape is super-diverse (the province is home to half of South Africa’s fauna and flora species) and fynbos is just one of the different plant communities here. There is also Renosterveld and Afro-montane Forest plus Strandveld and – as you head north – drier regions with succulent vegetation and other desert-like plants.

And the physical distance between these plant communities – ‘biomes’ is the proper word – is sometimes just a few footsteps. There’s no point turning the pages of a fynbos field guide if you are looking at plants on Signal Hill above Cape Town. It might look like fynbos – it’s bushy – but that’s renosterveld vegetation and there’s very little species crossover between these plants and the neighbouring fynbos plants a short distance away on Lion’s Head. 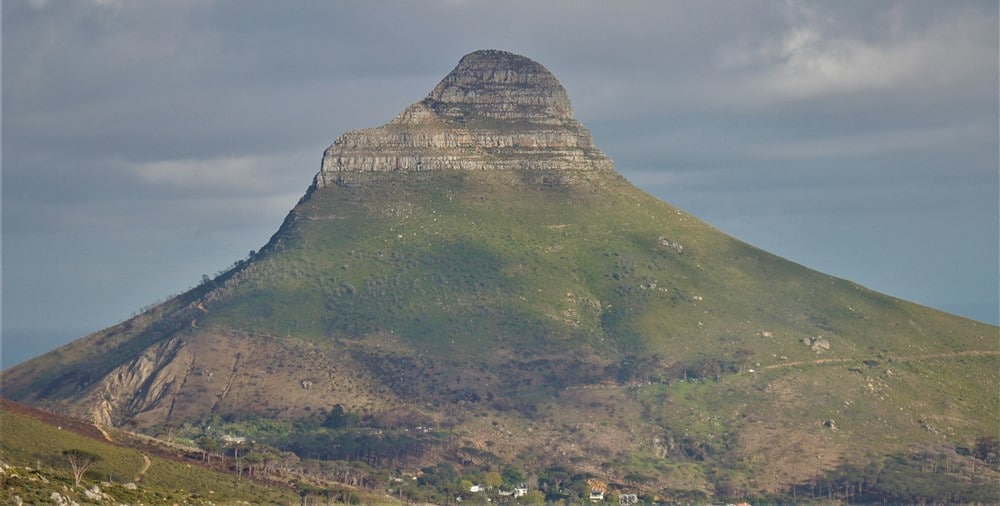 Identifying plants on Lion’s Head depends where you are standing: there’s sandstone fynbos at the top; granite fynbos in the middle & clay-based renosterveld below the road. Ignore the alien trees.

There are, however, two giveaways that signal you are in fynbos. Firstly, these are plants that stick to sandstone. Exceptions exist of course – there are fynbos communities on granite and limestone – but these are rare or remote and the general rule applies: if you are on the mountains of the Western Cape and their immediate hinterland – even by the ocean – and there are plants around you, then you should be in fynbos. 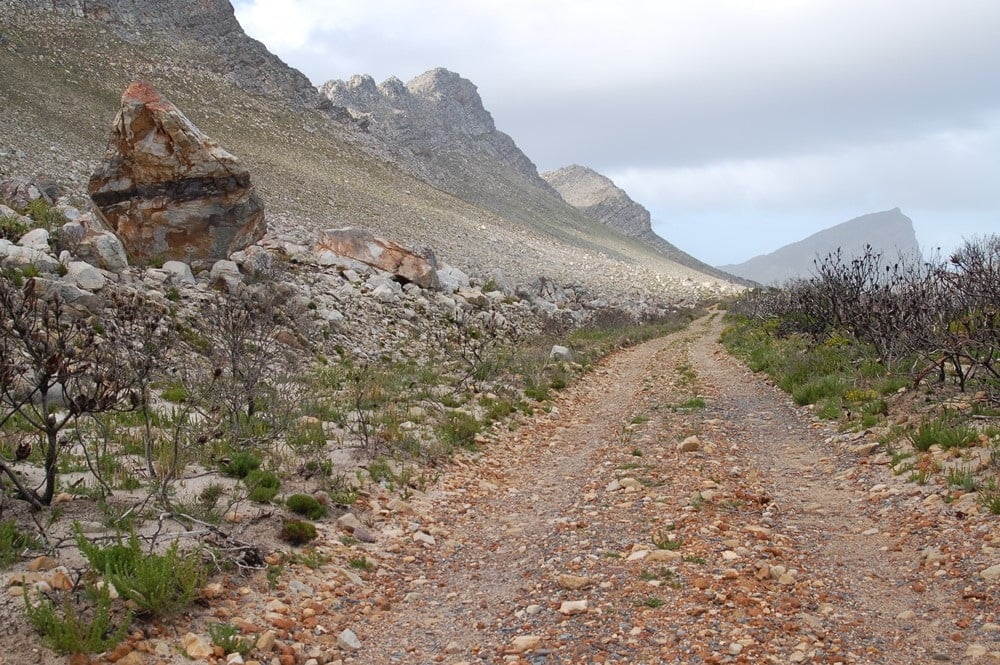 Fynbos is the biome that dominates the sandstone mountains in the Western Cape – even if the mountains have tumbled down to sea level like here in Rooi Els in the Overstrand.

The second giveaway will confirm it: look for Restios – the Cape Reeds. Restios are the lowest common denominator in fynbos; there may not be any proteas or heathers or flashy orchids where you are but there will always be a restio of some kind. To a large extent they take the place of grasses in fynbos and the more you see of them, the tougher the environment. Don’t worry about the different types of restio – they are notoriously hard to identify as individual species – but you will notice that they form the backdrop to fynbos and are mostly absent from other Cape vegetation types such as renosterveld. 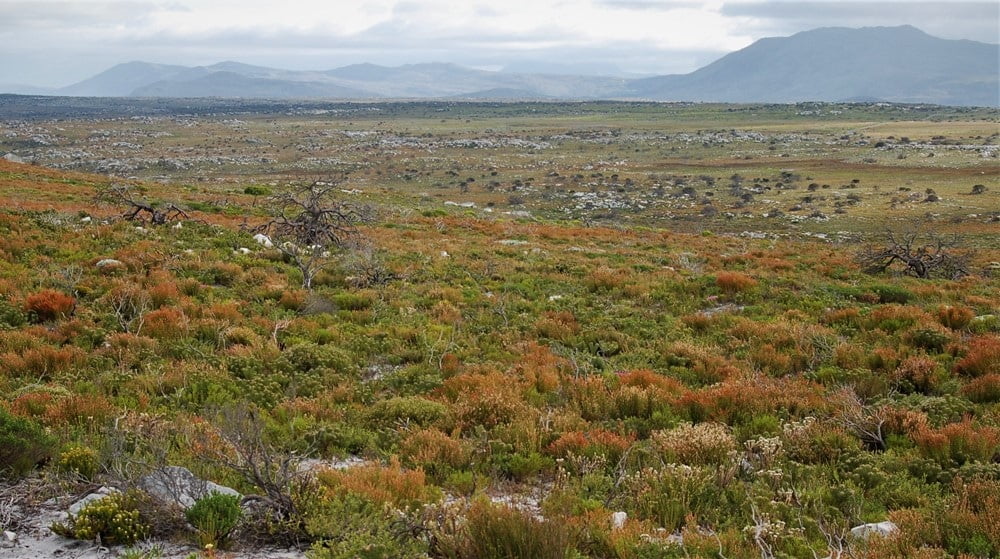 FYNBOS IDENTIFICATION STEP TWO: WHERE ARE YOU?

I know you are in the mountains but where? Fynbos plants tend to be localised; many are found only in specific regions or habitats so huge numbers of possible identifications can be dismissed if you check the distribution maps of a field guide. And South Africa does have an amazing range of flower field guides, including a set for the fynbos region that concentrates on key areas such as Table Mountain and Cape Point as well as the mountains of the Winelands and Whale Coast.

The localisation of fynbos plants can be extreme. If you want to see Staavia doddi, a lanky shrub with silver flowers, then you have to go to 300-metre stretch of low-lying sandstone above a beach in the Cape of Good Hope Reserve. And keep your eyes open for a mile or two as you drive along the R44 between Gordon’s Bay and Rooi Els – that’s the only place you’ll see Leucospermum bolusii, a pincushion protea with creamy white flowers. Even famous fynbos plants can be limited to precise locations. Don’t look for the Silver Tree (Leucadendron argenteum) in the fynbos of the Cederberg mountains; it only occurs on granite soil on the Cape Peninsula. But Rooibos Tea (Aspalathus linearis) refuses to grow anywhere except the Cederberg – you’ll never see it on Table Mountain.

There’s no point in identifying Serruria aemula unless you are in swampy ground on the Cape Flats to which it is completely restricted.

FYNBOS IDENTIFICATION – STEP THREE: WHAT DOES THE LEAF LOOK LIKE?

The design of fynbos plants – their size, the shape and colour of their leaves, their general appearance – is driven primarily by an overriding need to save water. Sure they need to deal with fire and predators and so on, but it’s the conservation of water in a predominantly hot, windy and dry environment that determines what they look like. And that’s best reflected in their leaves.

Fynbos has of course many succulents – plants that store water in their leaves or stems like Aloes and Ice Plants or Vygies (Aizoaceae family) – and these are relatively easy to identify as such. But when it comes to the good old-fashioned green leaf, then fynbos plants have worked out that there are three types of leaf that best withstand the rigours of the merciless Cape dry season – or ‘summer’ as we like to call it.

Ericoid leaves – these are the classic needle-like leaves: usually small, thin, stunted and with their edges often rolled over to shade their stomata, their breathing pores. This design ensures minimum exposure to the sun and is the business model favoured by the famous Erica (heather) family – hence the word ‘ericoid’. The problem is that it works too well and it’s a design employed by many other plant families in fynbos from Daisies to Brunias but if you are confronted by a non-descript bush with tiny thin leaves, at least you have a starting point: it’s an ericoid. 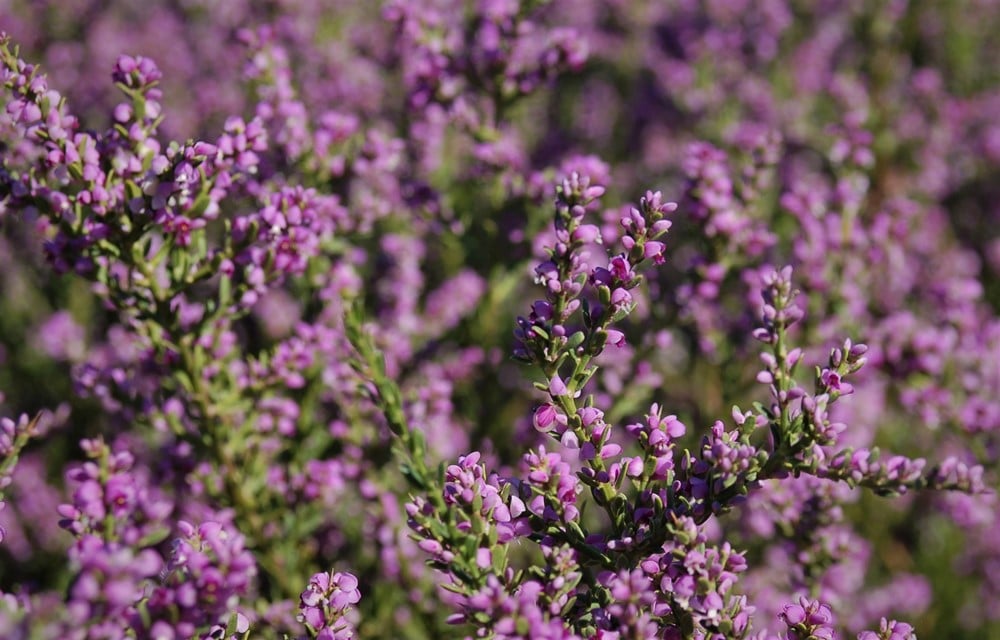 The ericoid leaves & heathery-coloured flowers might make you think “Erica!” but this ericoid shrub is Muralita spinosa in the Polygala family.

Proteoid leaves – no prizes for guessing which plant family gave this design its name. Proteoid leaves are big, flat and tough – they feel like leather or plastic – and are held vertically to reduce exposure to the sun. Many of the biggest leaves are fringed in red as extra protection from the sun. It’s a common design in the Protea family but one also found in the Daisy family for example and is usually seen on bigger shrubs at lower altitudes. 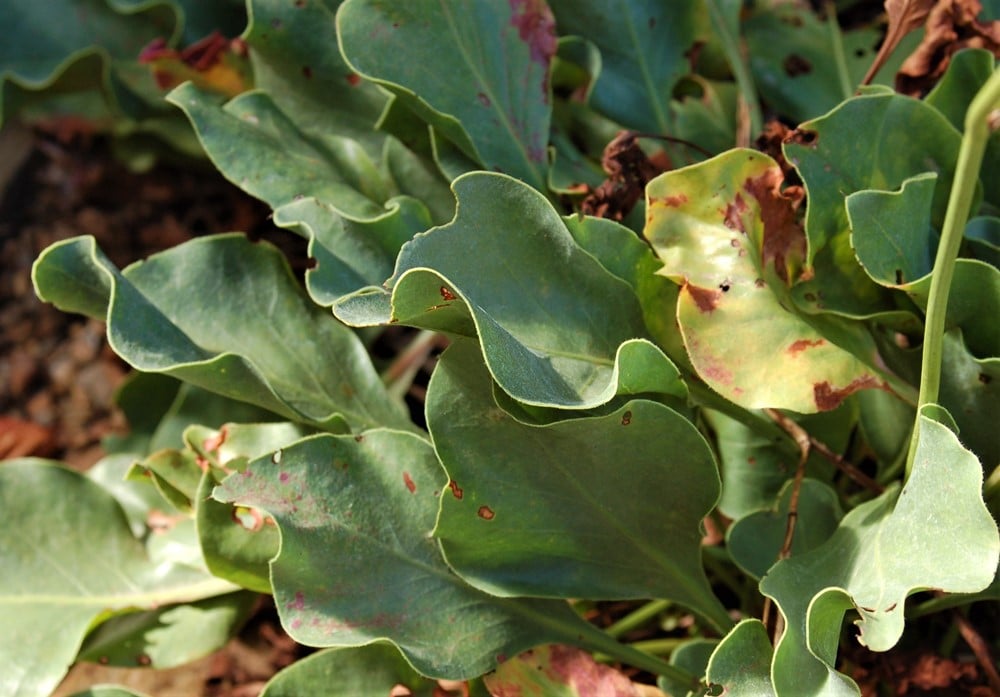 These are proteoid leaves – thick & leathery – but this is no protea; it’s Sea Lavender (Limonium scabrum) in the Plumbago Family.

Restioid leaves – we met the Restios above – the Cape Reeds – and one of the reasons for their success in fynbos is their leaf design: they don’t have any. By getting rid of their leaves and relying on a green stem to do the photosynthesis, Restios have hit on a very effective way to conserve water and it’s copied by several other plants including members of the Iris family. 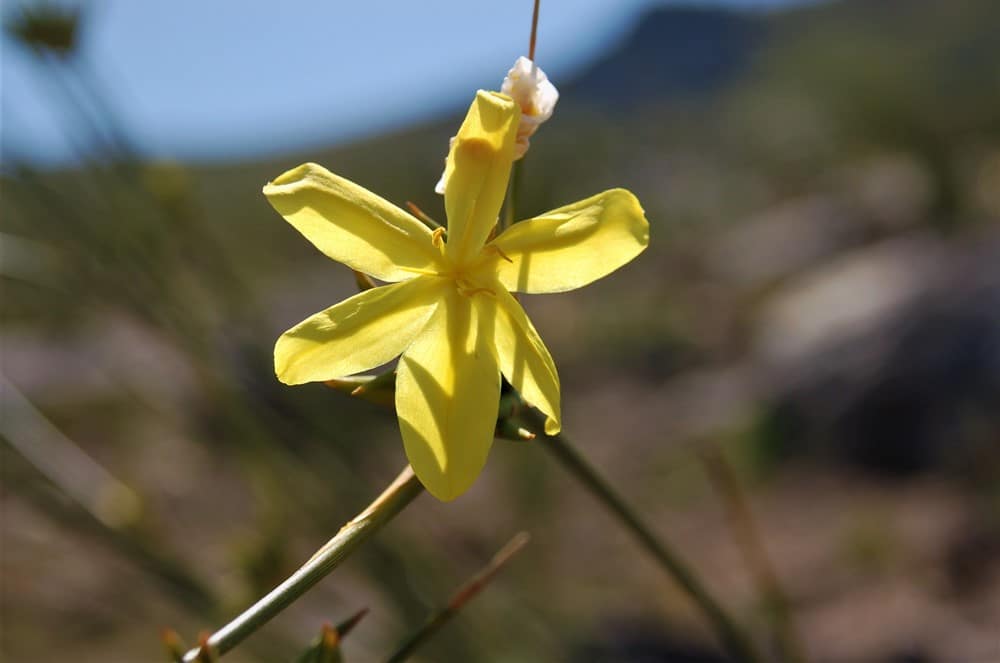 There’s no mistaking Bobartia indica as an Iris when in flower but it sits on tall reedy stems with no leaves – easy to think it’s a restio or sedge.

FYNBOS IDENTIFICATION – STEP FOUR: IS THERE A FLOWER?

Now we’re getting closer. The presence of a flower is a huge step towards identifying a fynbos plant and is easier than you think. Plants are put into their respective families – Protea, Erica, Daisy – based on their flower structure. Forget what the plant itself looks like – it’s the flower that determines what they are. Take Senecio crassulaefolius for example; hanging off rocks on Lion’s Head, its fat grey leaves immediately bring to mind a cactus-like succulent but it is – somewhat inevitably – yet another daisy thanks to its simple compound flower structure. 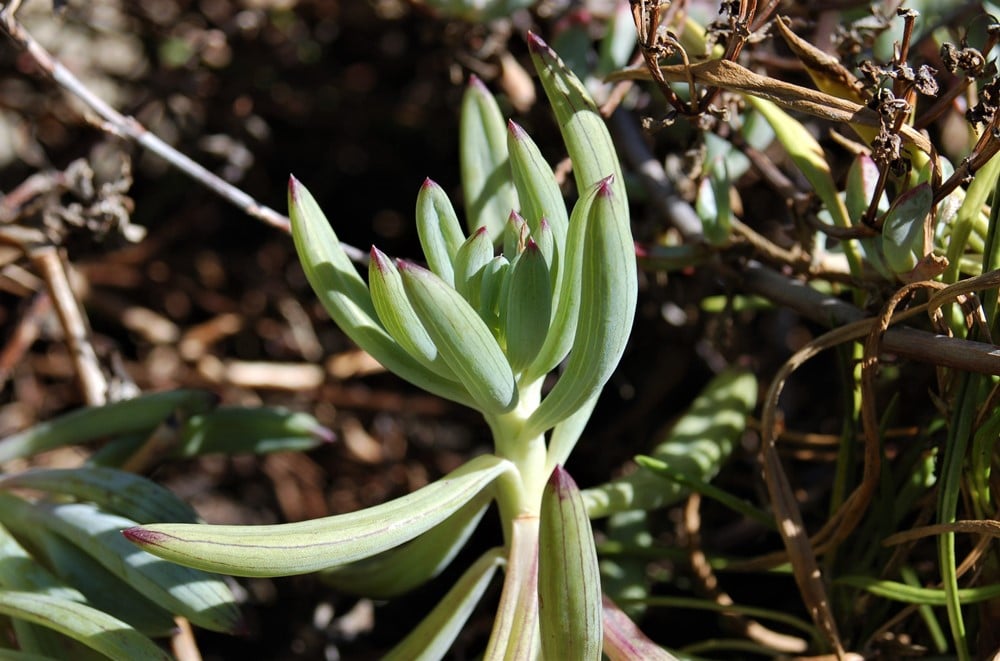 Fynbos plants like Senecio crassulaefolius have you thumbing through pages of succulent families until it flowers & reveals itself as a member of the Daisy family.

You’ll see it all through fynbos: the flat spiky leaves of Arctopus echinatus would never make you think of a carrot but when it blooms in the Cape winter, you’ll see the classic umbrella-shaped flower that so characterises the Carrot family – Umbelliferae. Other familiar flowers are there too – you can’t mistake a flower from the Pea family or the Orchid family for example – and you’ll soon pick out the familiar shapes of geraniums, gentians and irises, their flowers reminding you of the stuff you have in the garden back home.

Now you just need to practice. Don’t worry about identifying plants to a species level; focus instead on familiarising yourself with the major families (“that’s a Protea, that’s a Daisy, that’s an Iris”) and the genera (the next level down) – “that’s a type of Serruria in the Protea family” – will come pretty quickly. And then the species start arriving – “I’m at Cape Point in low mountains and so that must be Serruria Villosa” – and, finally, it all starts to make sense.