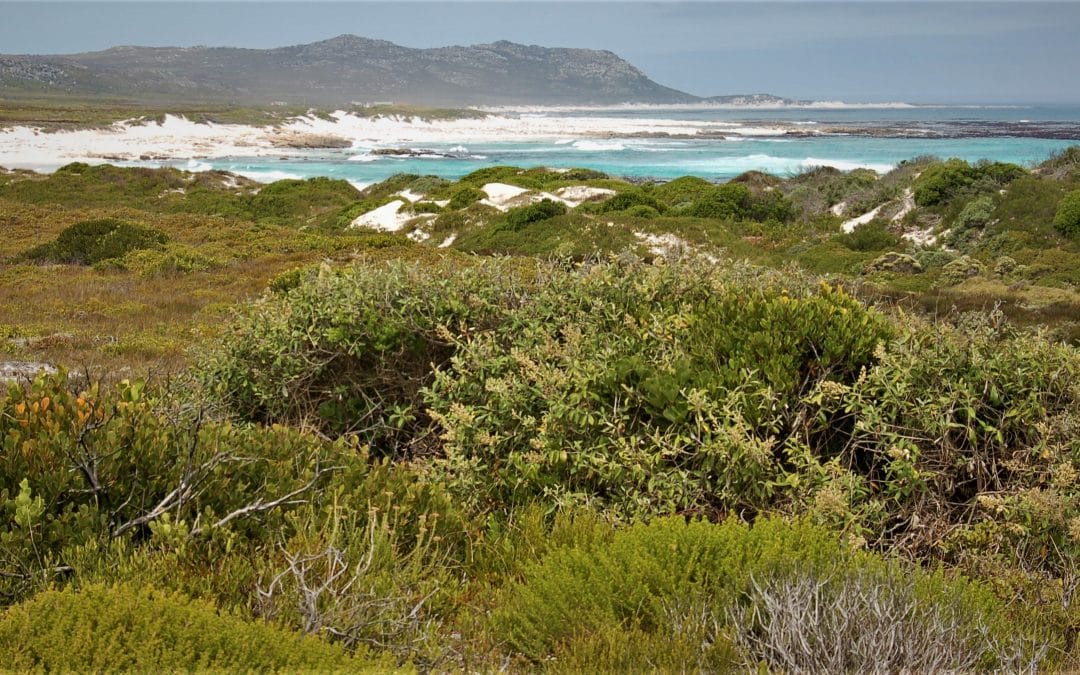 Sorry to tell you this but Fynbos is a tight-fisted so-and-so. As beautiful as it is, this vegetation is so lacking in things to eat that even Bear Grylls would end up ordering in. Apart from a handful of Iris bulbs, nearly all fynbos plants are inedible: very few offer soft munchy leaves or ready-to-eat fruit and nuts. And animals – at least those we can hunt or trap – are crushingly scarce: a few twitchy antelope, the odd snake and a tortoise or two.

So where did that leave history’s humans? If the scientists are right and we really have been in this corner of Africa for 200 000 years, then how did we do it by boiling bulbs and eating reptiles?

The answer is that we didn’t. Homo sapiens in the Cape generally stayed well clear of the wind-whipped, fire-prone mountains and did what any normal person would do: they headed for the beach. 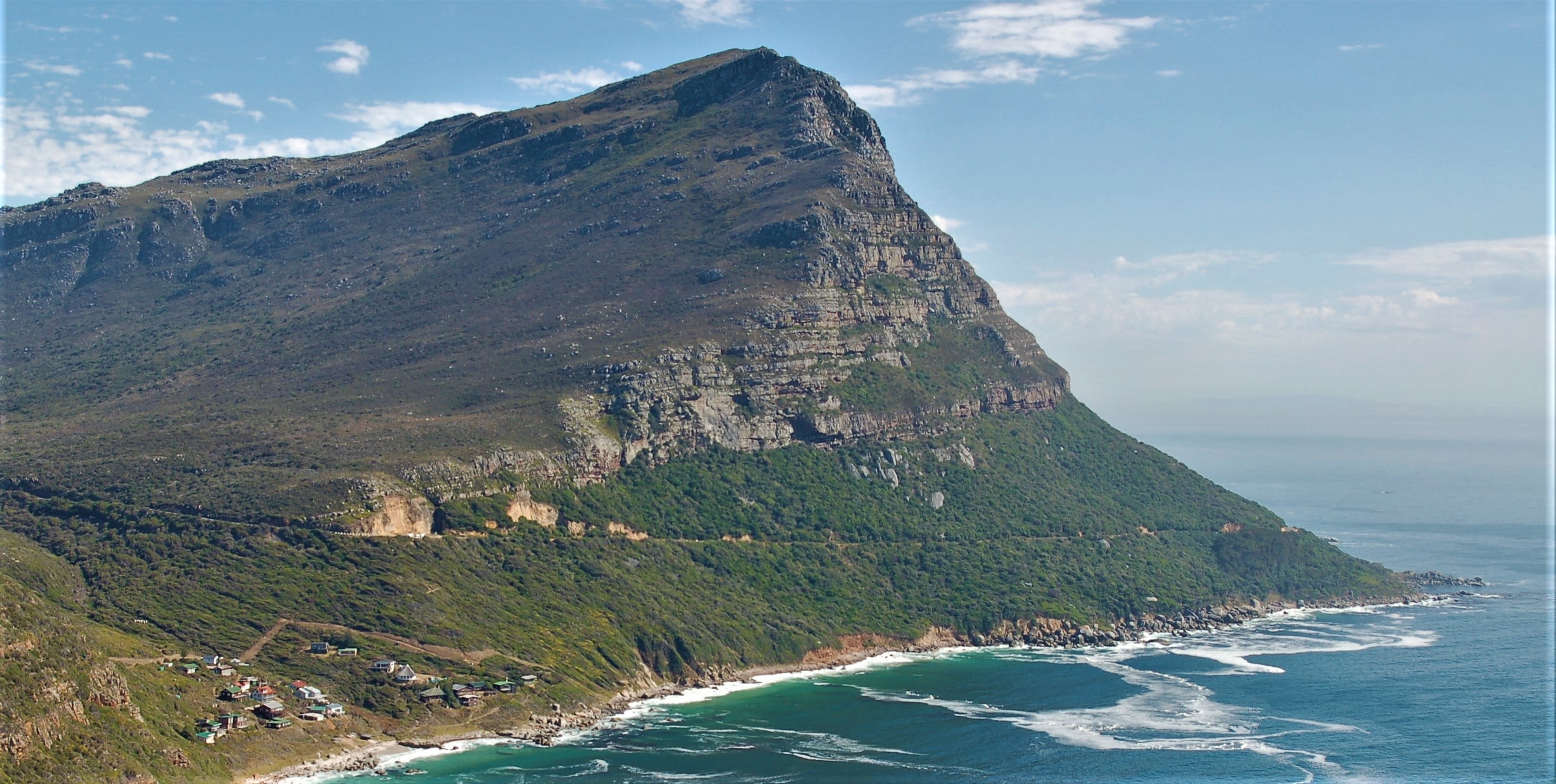 Making the most of fertile granite soils, a thick green belt of Strandveld vegetation is clearly visible between the ocean and the sandstone cliffs where Fynbos plants take over.

The Cape’s coastal waters heave with life – both in terms of biomass (the sheer number of things) and the diversity of species (the number of different things). Hungry? Simply wait for the tide to go out or something big to wash up and you have free protein. But accessing this bounty means walking through a belt of vegetation quite different to the adjacent Fynbos. Proteas and heathers give way to bigger, thicker bushes and even small trees, laden with berries and peppered with bird calls. You can hear the hum of a wild bee’s best and the creaking of frogs in the damp dune slacks; turn over the mulchy leaf litter that covers the ground and you’ll find bugs and juicy grubs.

You’re in the Strandveld and this is where we once lived.

The word is of Dutch origin and Coastal Bush is about the best translation. The pronunciation is not as easy as it looks – try ‘Strahnd-felt’ – and it sits alongside other distinct biomes such as Fynbos, Afro-Montane Forest and Renosterveld in the Cape Floristic Region – the umbrella term given to the various plant habitats in the south-western Cape.

Thick and leafy with more available food than fynbos, Strandveld provided prehistoric humans with a well-provisioned shelter a short walk from the even greater riches of the exposed shoreline. But the big deal-clincher is that Strandveld (unlike Fynbos) is not especially flammable and doesn’t require regular incineration to survive. Useful to know if you are planning to stay a while. And we did stay a while: caves along the Cape coast have yielded amazingly old artefacts – a 100 000-year old painting kit for example. 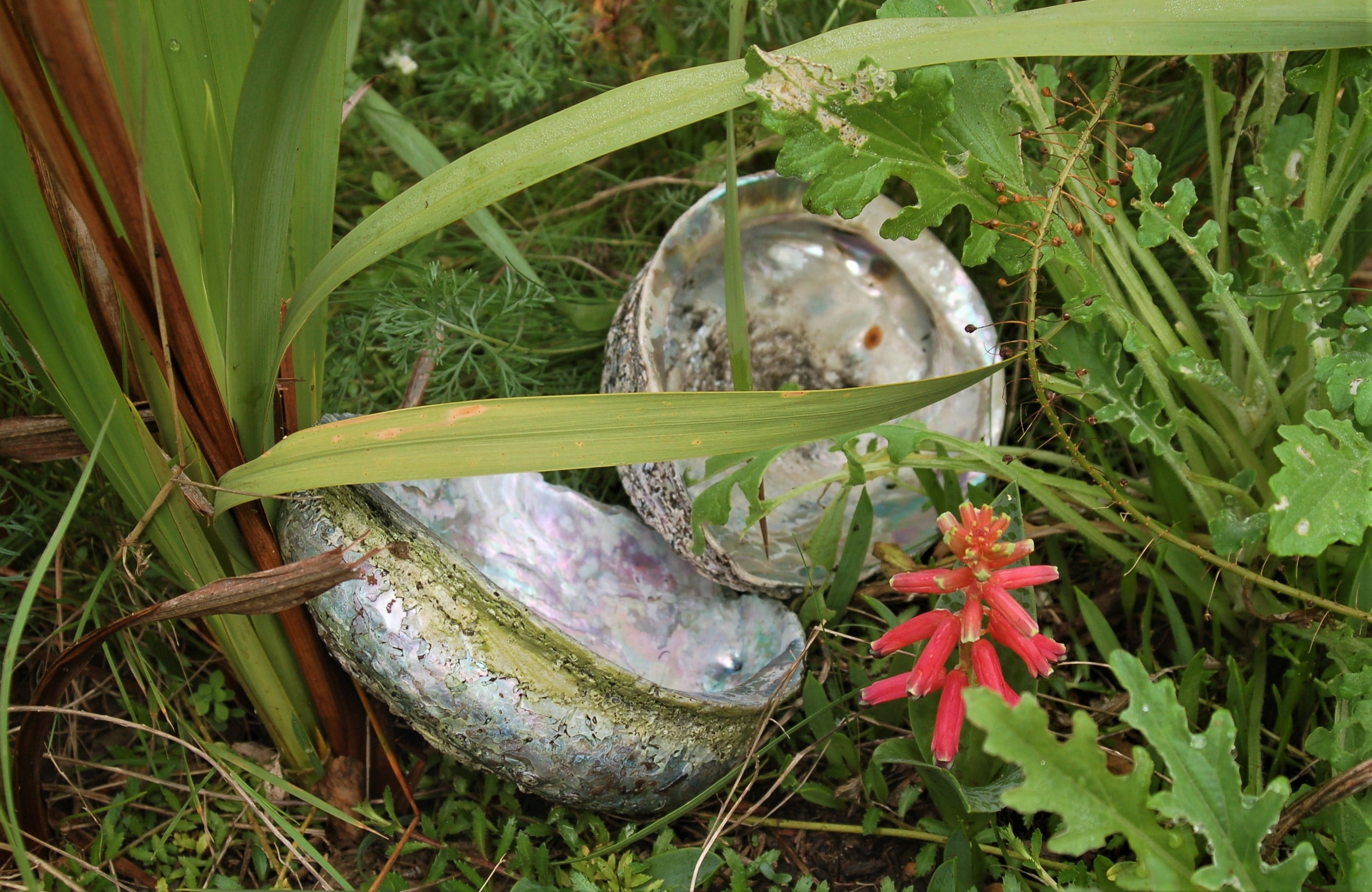 Strandveld plants tend to have large, shiny leaves – often fleshy – and thick stems that discourage fire; few are laden with the scented oils that neighbouring Fynbos plants use to encourage combustion and there are many fire-resistant succulents such as Aloes (Asphodelaceae) and Ice Plants (Aizoaceae). Indeed, after a long time without fire, coastal Strandveld often morphs into Milkwood forest (Sideroxylon inerme), an almost impenetrable tangle of trees that remain islands of green while the rest of the landscape goes up in smoke. 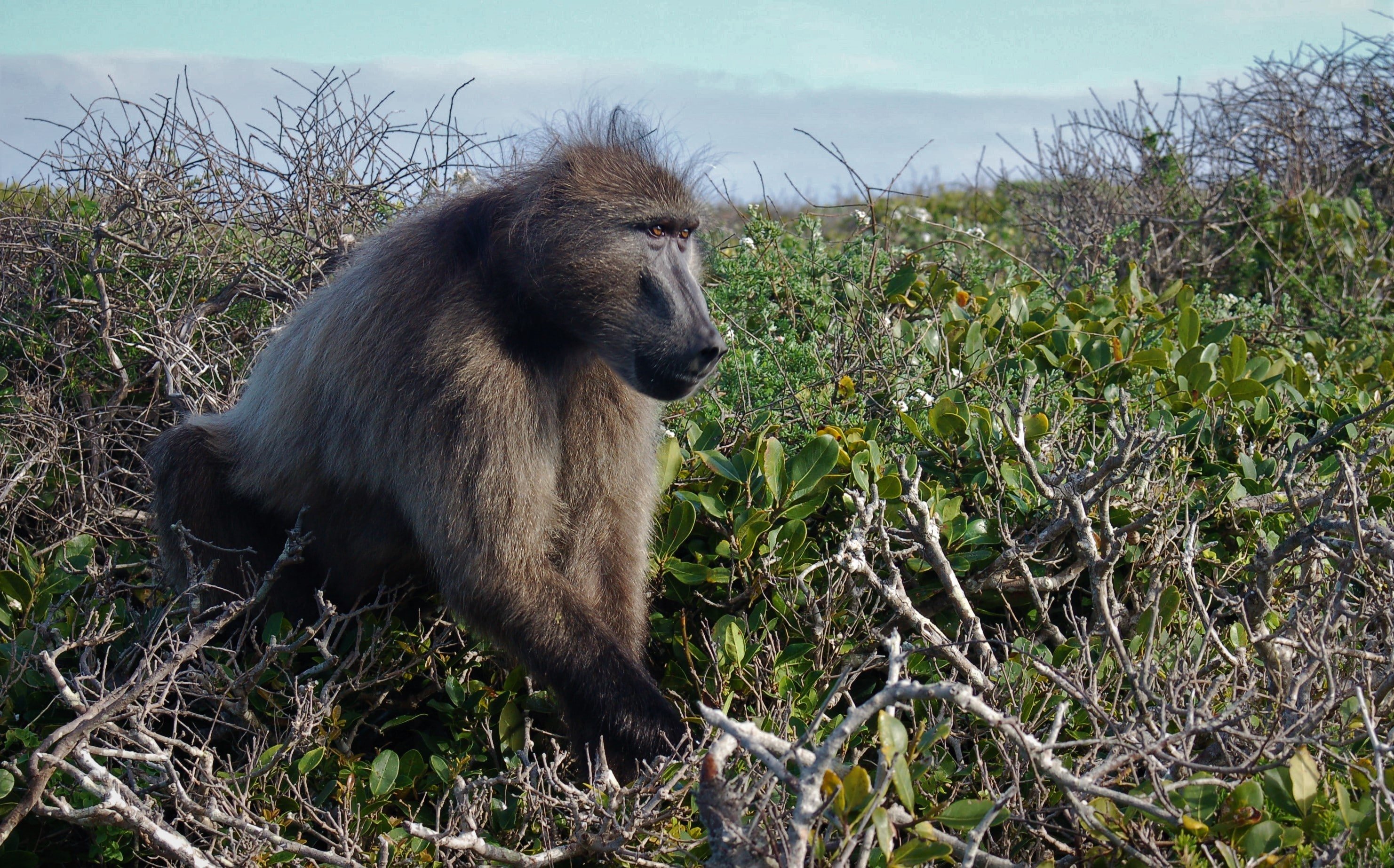 Coastal-based Baboons (Papo ursinus) do most of their food foraging in Strandveld too: this leads to direct conflict with modern humans as this is where we have built our picnic sites & holiday cottages.

But without fire to disperse seeds and trigger germination, Strandveld relies on other agents – most notably birds. With plenty of potassium and phosphorus in the soil, Strandveld plants are able to produce fleshy fruits which are eaten and their seeds dispersed by birds like the Cape Bulbul (Pycnonotus capensis) and Olive Thrush (Turdus olivaceus). 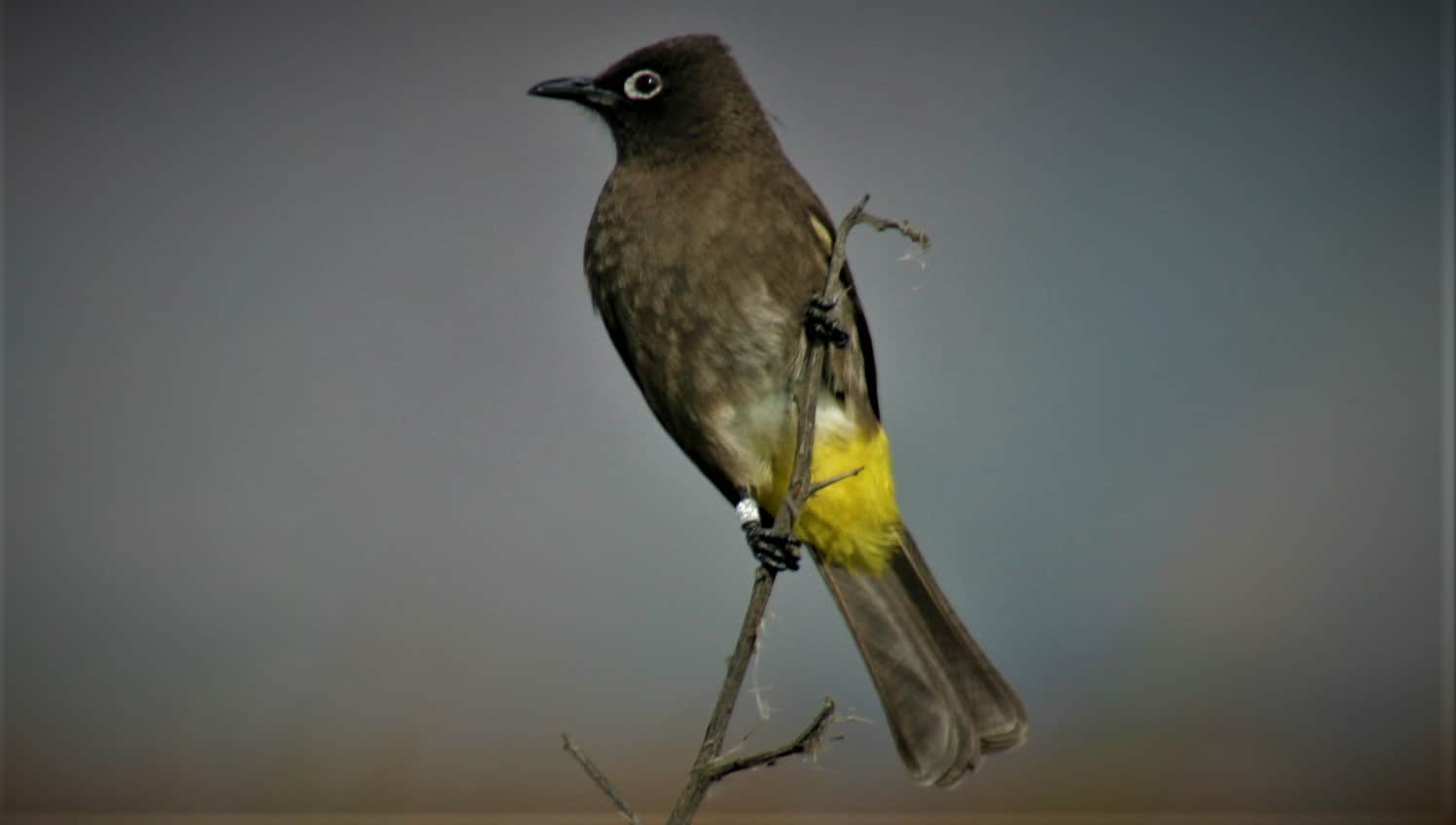 The frugivorous (fruit-eating) Cape Bulbul (Pycnonotus capensis) is a key player in the dispersal of Strandveld seeds; their mobility means Strandveld patches are constantly topped up with seeds & fertilizer.

And in contrast to Fynbos plants, the leaves of Strandveld plants are relatively nutritious and would have once been browsed by the Cape’s now-extinct mega fauna – elephants and black rhinos – evidence of which you can still see: many Strandveld plants have long and sharp spines, left over from a time when they were needed to deter large browsing animals. There’s more to hunt in Strandveld – larger antelope, bigger birds and more tortoises – and when domestic sheep and cattle arrived in the Cape 2000 years ago, the indigenous Khoisan let them graze in Strandveld, a practice followed by the Dutch settlers.

It’s often wetter in Strandveld too: local rivers run to the sea through the Strandveld to create rich coastal wetlands full of birds while the larger dune slacks (wetlands in between sand dunes) were once home to hippos. Big herbivores means big carnivores, and just a few hundred years ago, the Strandveld echoed to the roar of lions. 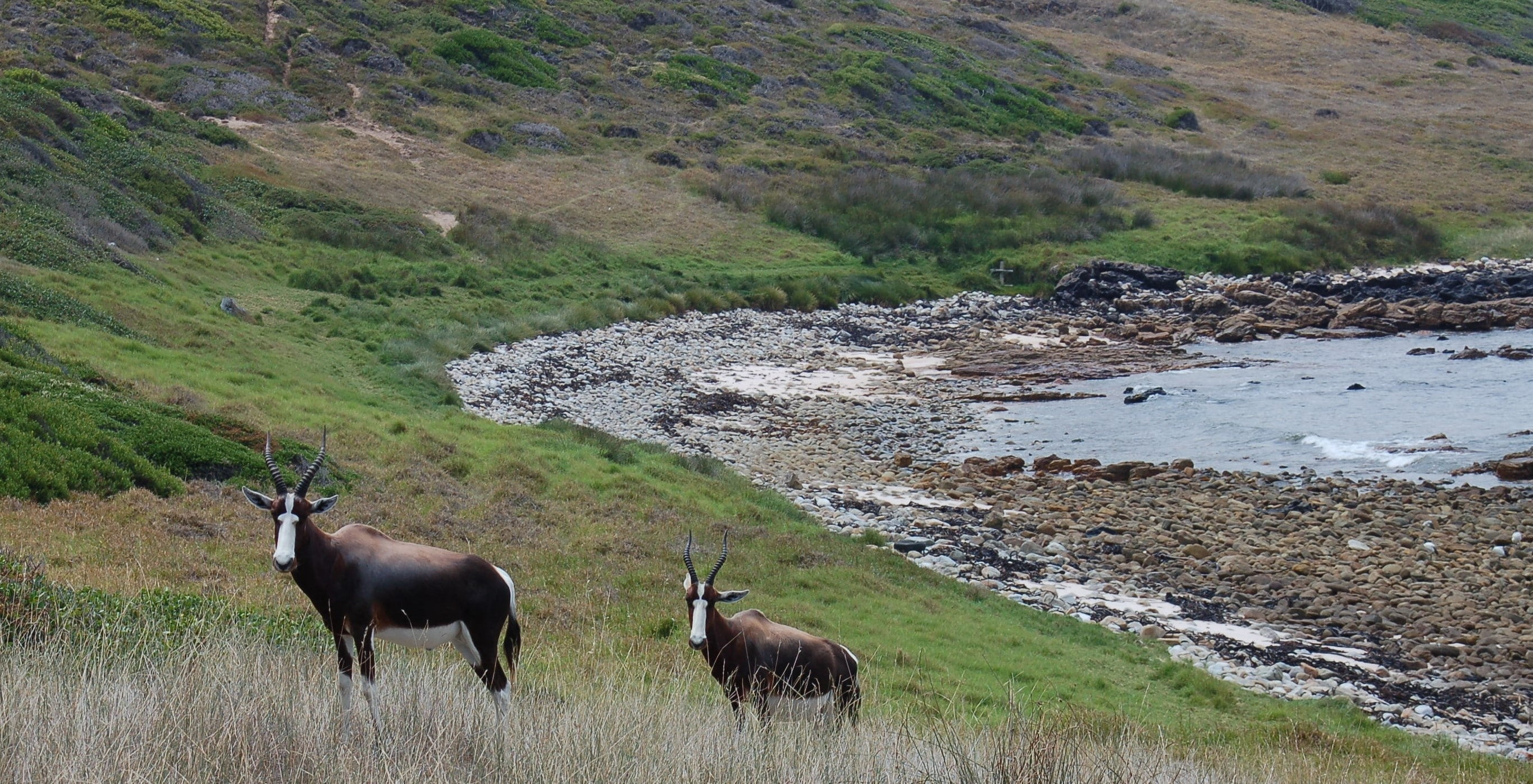 The presence of grasses & palatable shrubs means Strandveld can support big animals – these are Bontebok (Damaliscus pygargus pygargus) in the Cape of Good Hope Reserve. 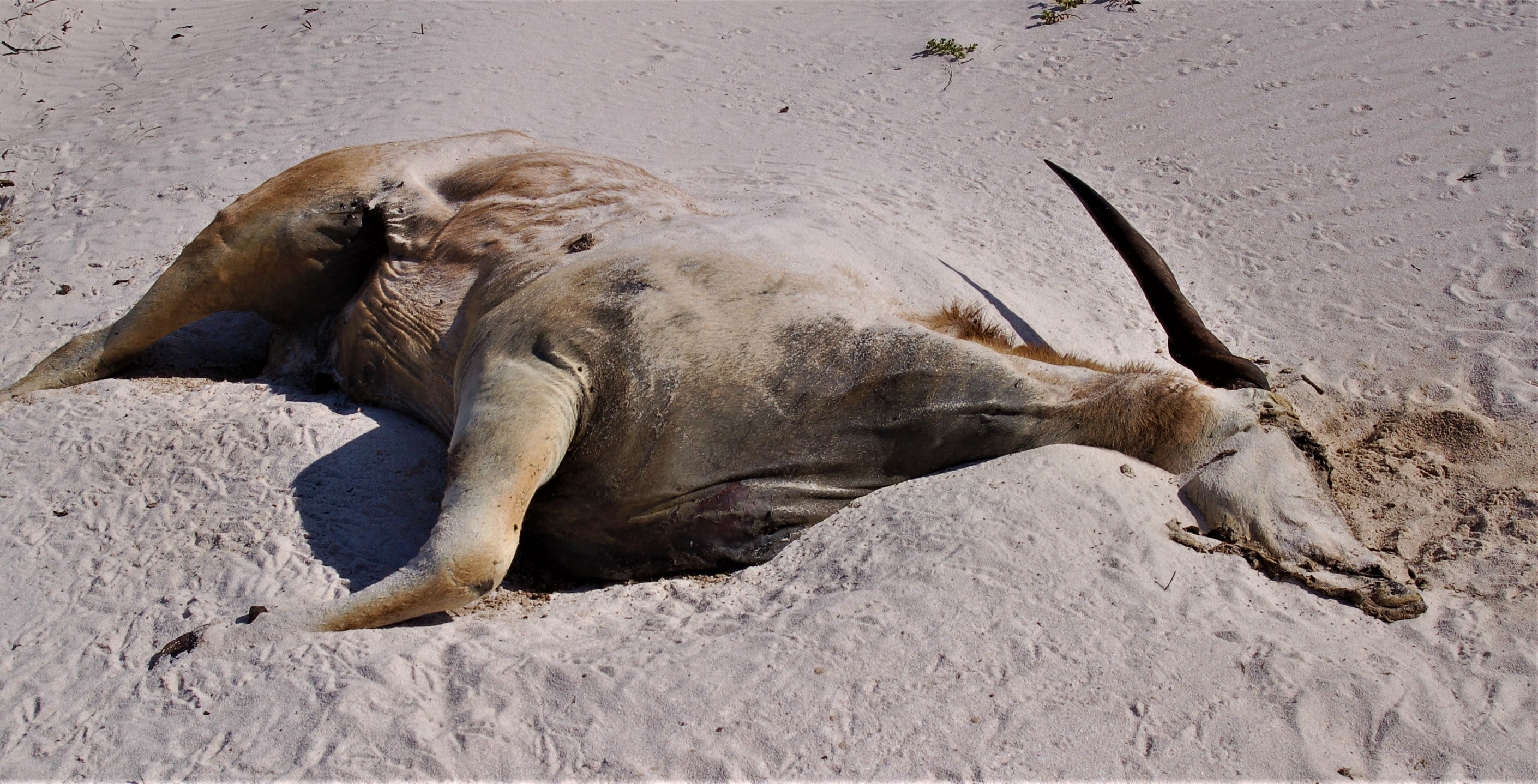 Half-buried in a Strandveld dune is another resident – the Eland (Taurotragus oryx), Africa’s biggest antelope & a fine prize for Khoisan foragers.

There’s not much Strandveld left these days, in the Cape Town area at least. Its preference for the Cape’s coastal strip has left it at the mercy of property developers although it still thrives as you move eastwards along the Cape coast where it is often called Sub-tropical Thicket. But it has always been a marginal biome and enough of it survives to us to explore. Head for the Cape of Good Hope Reserve for an easy introduction – the Olifantsbos or Gifkommetjie areas on the Atlantic coast are good examples.

The dunes around Olifantsbos Beach in the Cape of Good Hope Reserve are covered in Strandveld – go in August/September for the best flowers.

For an extraordinary urban experience of Strandveld, the Cape Flats Reserve in Bellville is your chance to see Cape Flats Dune Strandveld, a unique and highly endangered vegetation type found only within sight of the city of Cape Town.

A Strandveld wetland at the Bellville Reserve: now full of frogs & insects but just a few hundred years ago there were hippo & buffalo too.

As for when to go to see Strandveld at its best, you are spoilt for choice: the warmer summer months will yield some of the more unusual flowers such as Candelabra Lilies (Brunsvigia orientalis) as well as crowd-pleasing Wild Marijuana (Leonotis leonurus) in bloom. 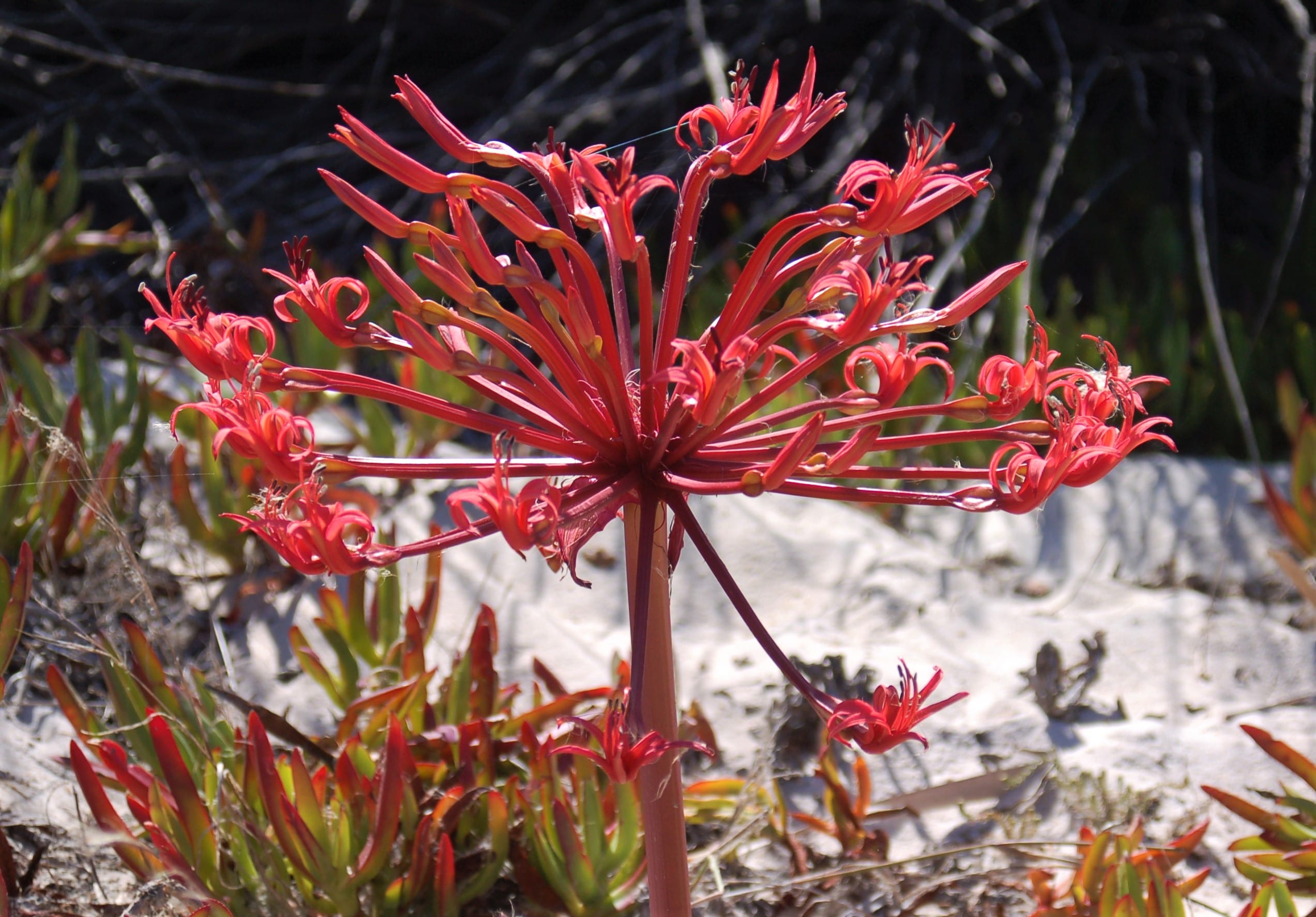 Open sandy patches of Strandveld are good for flowers: this is a Candelabra Lily (Brunsvigia orientalis), a member of the Amaryllis family. 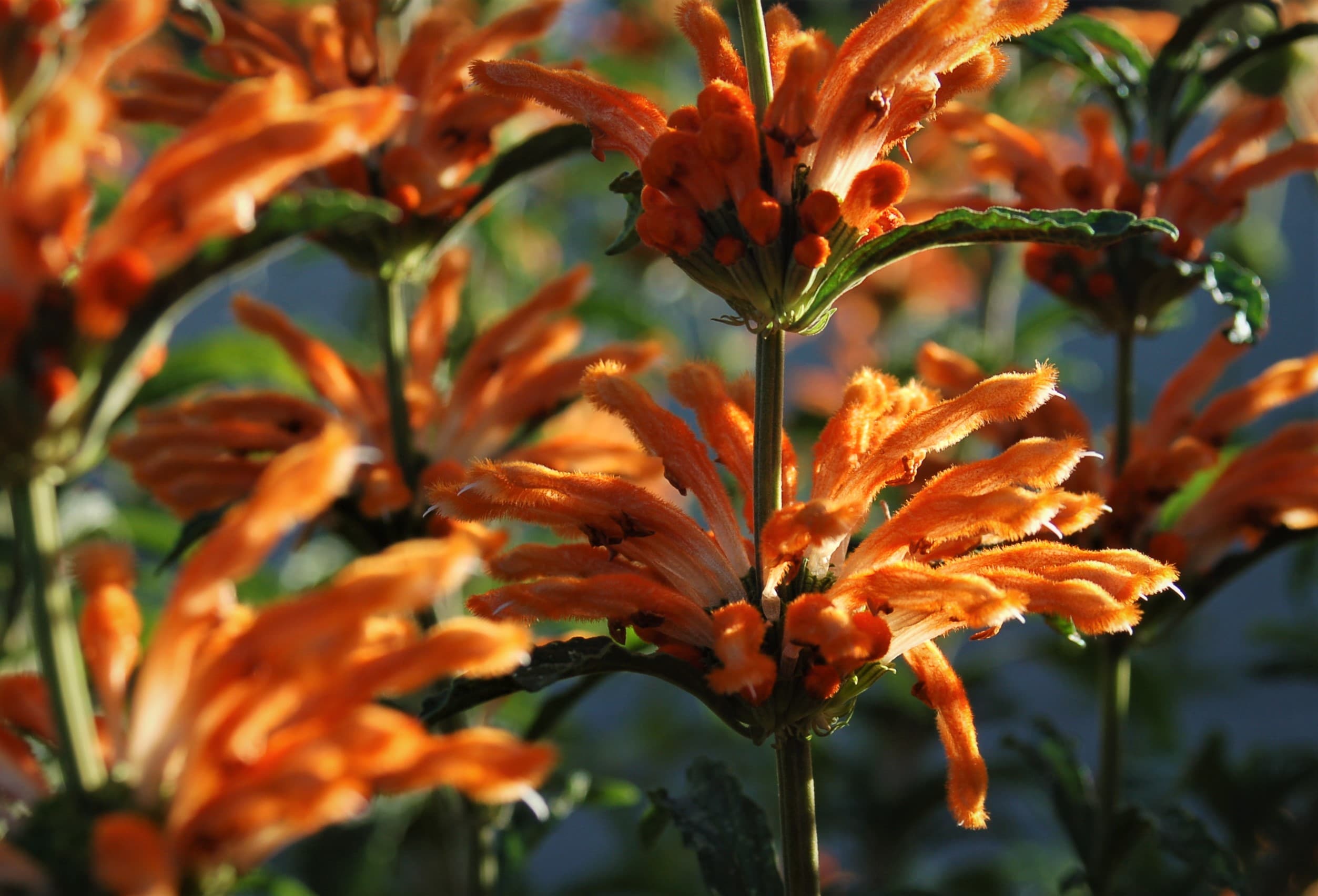 Wild Marijuana (Leonotis leonurus) is found in Strandveld & its flowers have evolved to match the beak of its pollinator – the Southern Double-collared Sunbird (Cinnyris chalybeus).

But if you want the most flowers, then late winter/early spring is best: July, August and September. Now you’ll see big sheets of colour as the Strandveld’s annuals bloom – mostly in the Asteraceae (Daisy) family – plus many members of the Aizoaceae (Ice Plant) family, renowned for their floral extravagance. Treat yourself to a trip to the West Coast National Park, an hour and a half north of Cape Town for one of the best remaining stands of Strandveld. You never know, it may feel like coming home. 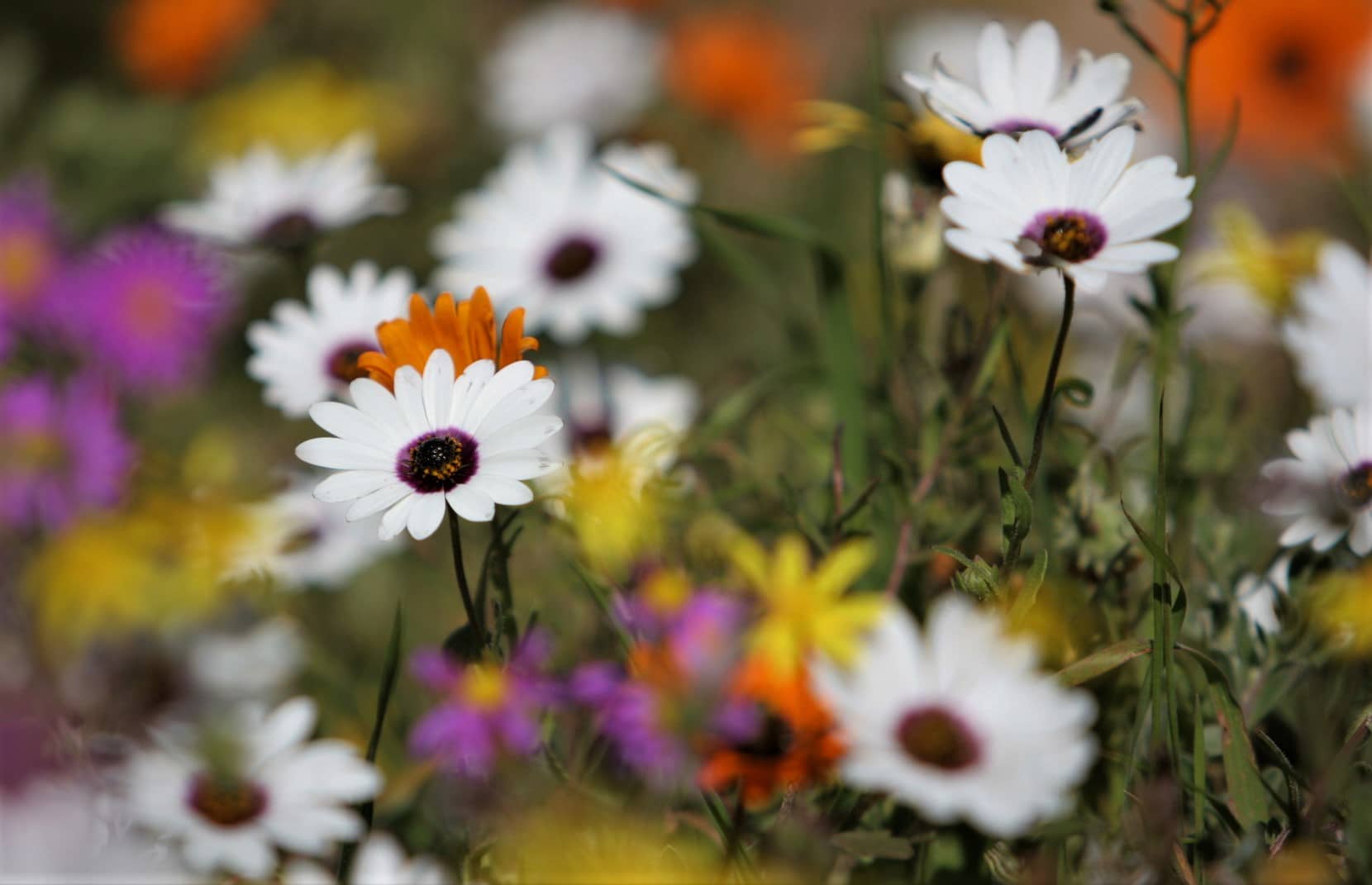 No need to drive all the way to Namaqualand for the famous flowers: the West Coast Strandveld is just as good & is only an hour & a half from Cape Town. Go between July & October for the best flowers. 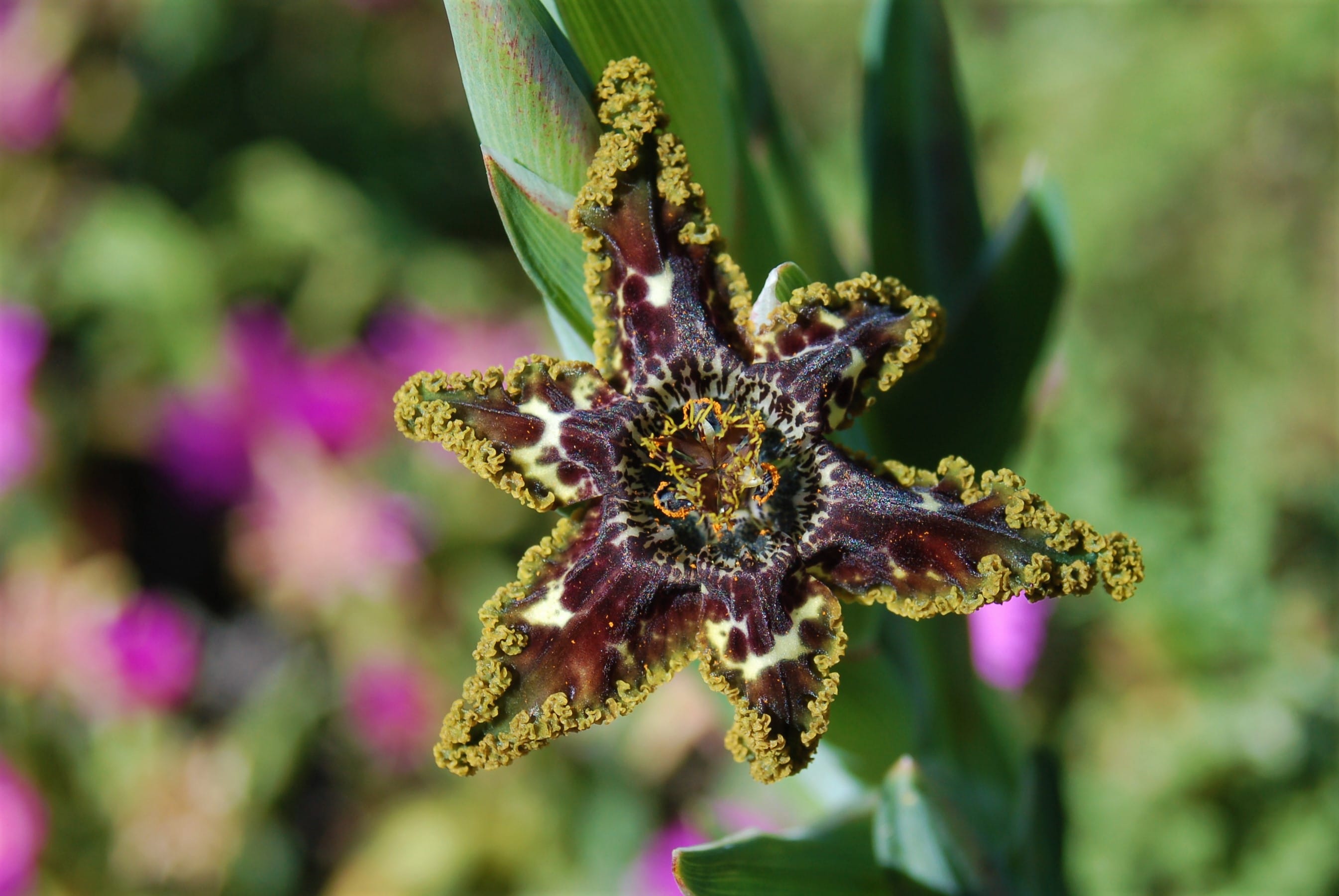 The Spider Lily (Ferraria crispa) is a member of the Iris family & lights up the Strandveld in September with its arresting colours & unpleasant smell; the flower has evolved to resemble rotting meat to attract fly pollinators. 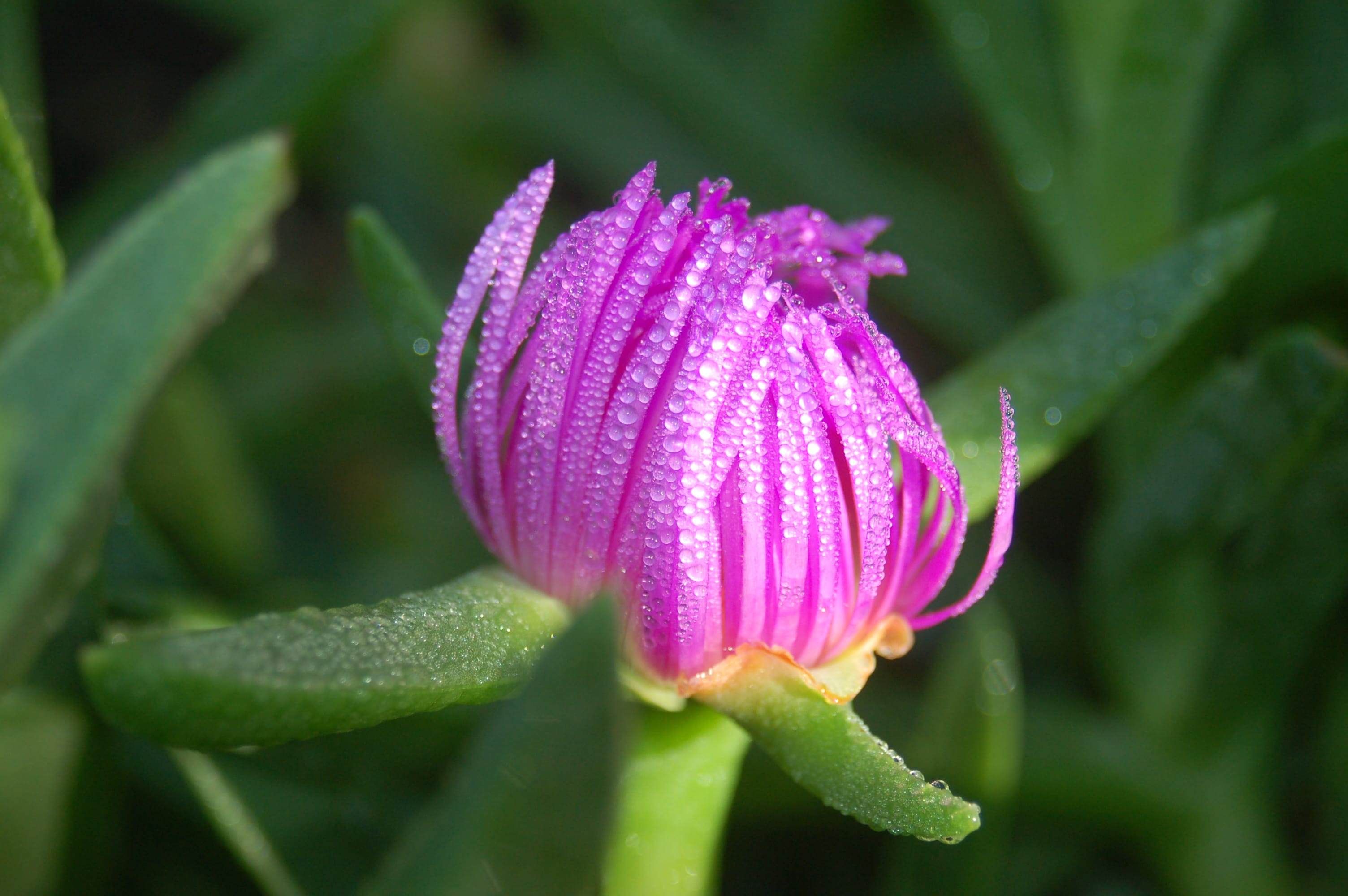 Carpeting great areas of the Strandveld, the Sour Fig (Carpobrotus edulis) was once an important part of our diet: its fruits are dried & eaten or made into jam.