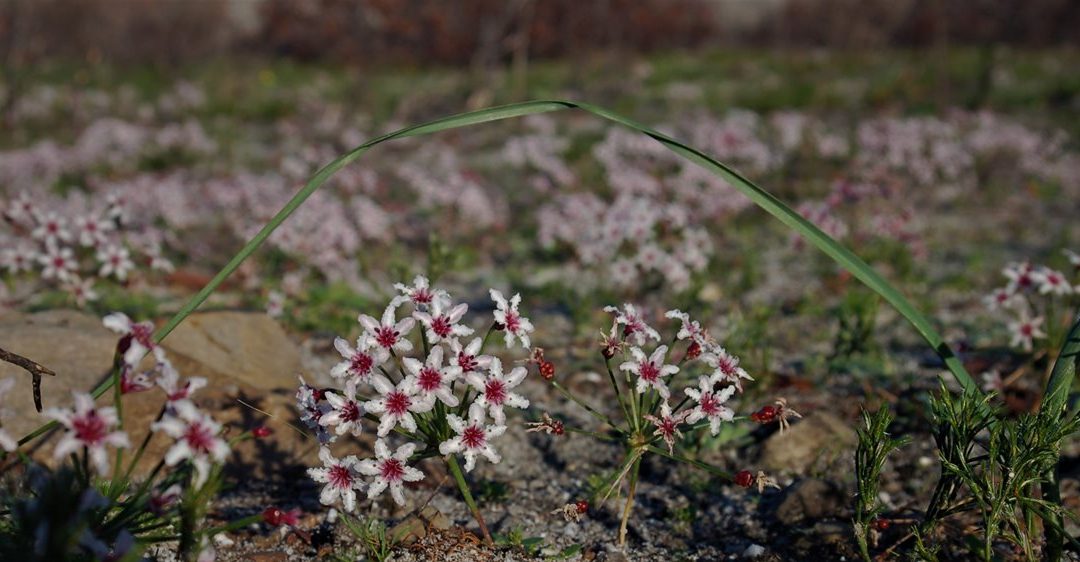 Imagine spending your life hiding under your bed waiting for the house to burn down. And when, after 20 or 30 years it eventually does, you miraculously emerge in clothes of dazzling colour. You cavort briefly, have as many offspring as conditions allow, and then return to the wreckage of your house, settling down for another decades-long wait.

Welcome to the life of the fynbos bulbs.

We call them bulbs because that’s the easiest term for them. The proper word is geophyte – ‘earth plant’ – and they are plants with, simply put, an underground energy storage unit: these include tubers, corms and rhizomes as well as bulbs. 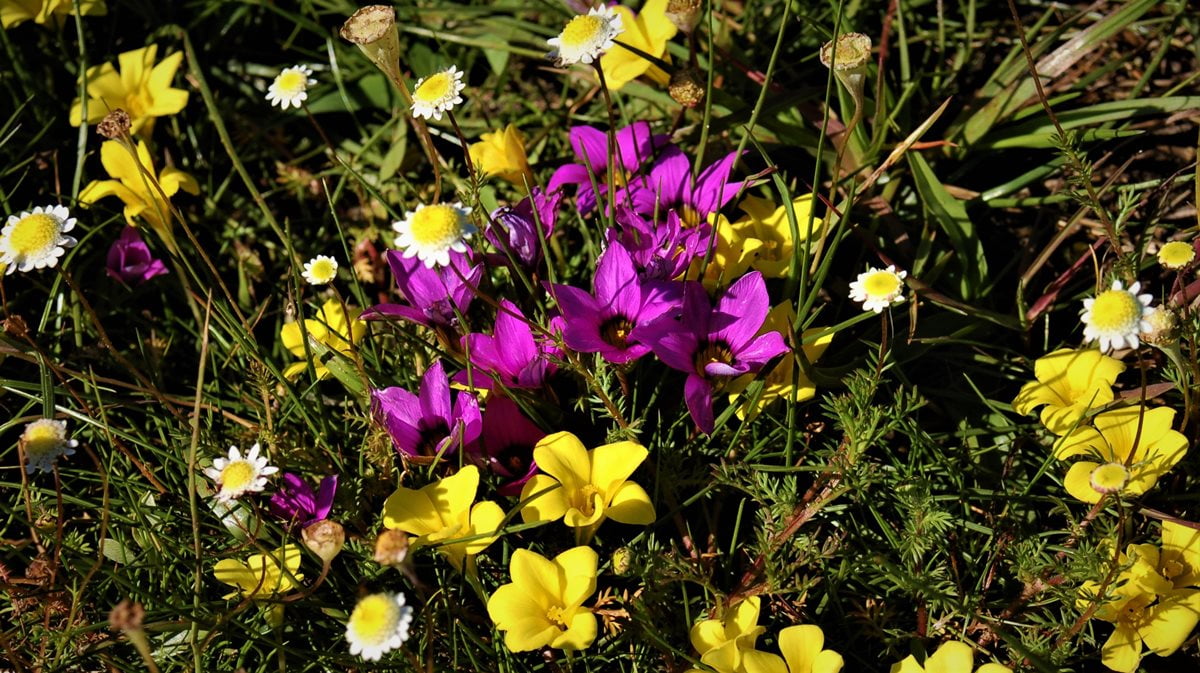 Two species of Romulea – a type of Iris with an underground corm – provide a burst of colour on a winter’s day.

Comprising 20% of fynbos plants, the geophytes belong to families you already know – Iris, Amaryllis, Hyacinth – and some that may not be so familiar – Hypoxidaceae (the Star Grasses) and Haemodoraceae (the Bloodroots). I run the risk of raising academic eyebrows with my inclusion of the Orchid family among the bulbs but the fynbos orchids grow from underground ball-shaped roots – indeed, not for nothing is the name ‘orchid’ derived from the Greek word for ‘testicle’. 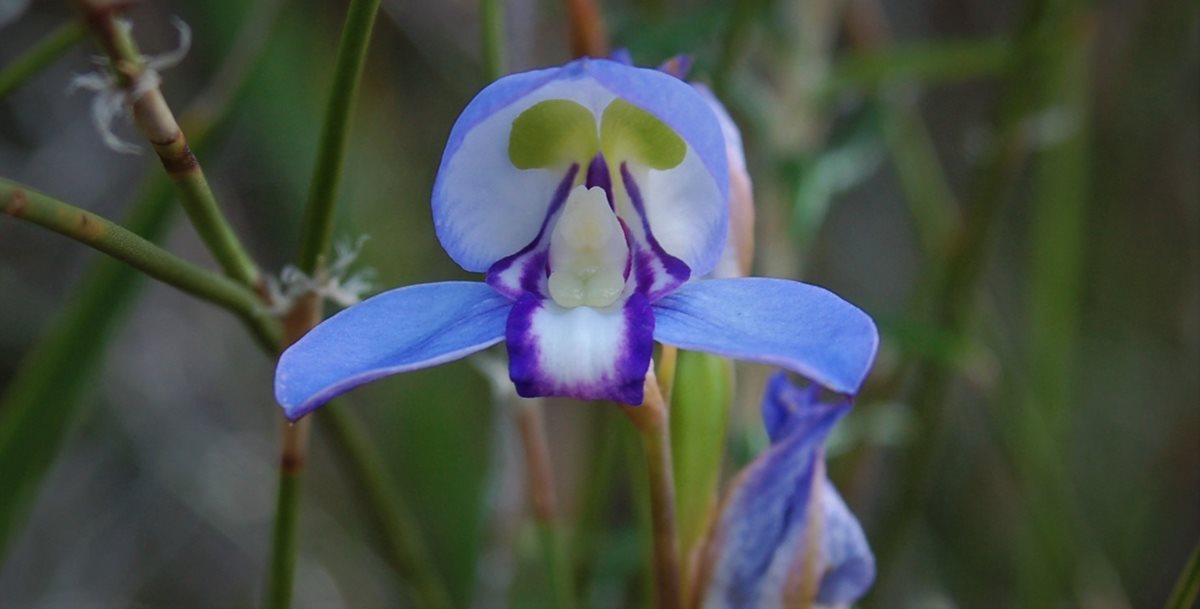 The Blue Disa (Disa graminifolia) is an orchid that grows its flower stalk from an underground tuber.

The fynbos bulbs produce some of the most spectacular flowers in the world and can carpet swamps, coastal flats or rocky mountainsides in sheets of colour. Some are heartbreakingly rare – confined to a few remaining scraps of habitat – while others thrive in your garden: Arum Lilies (Zantedeschia aethiopica) and Red-hot Pokers (Kniphofia uvaria) for example. 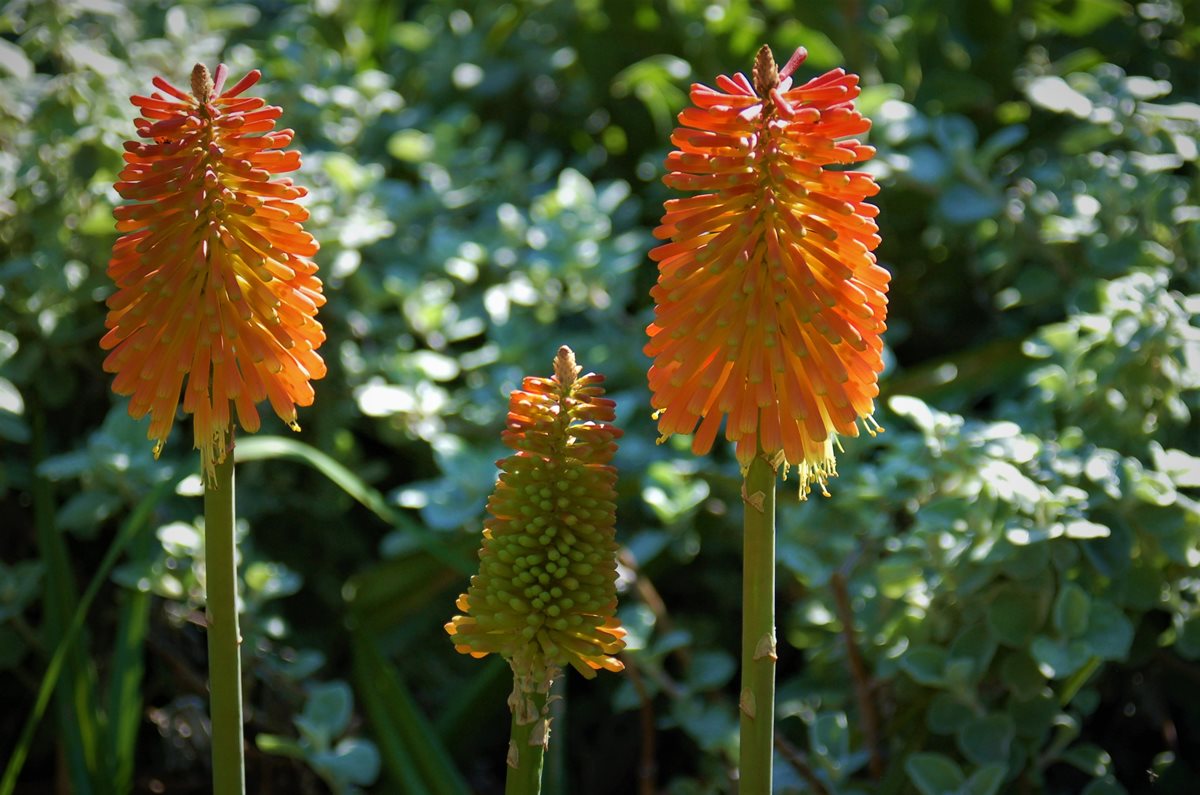 In the Aloe family, Kniphofia uvaria is known as a Red-hot Poker & has become a successful garden plant around the world.

Edible geophytes such as Watsonia and Gladiolus were fundamental to the survival of early Homo sapiens in the Cape and the use of fynbos bulbs as food continued to modern times. In fact, traditional Cape recipes still demand their inclusion – no Waterblommetjiebredie (‘water-lily stew’) is complete without a handful of lemony Oxalis pes-caprae – commonly called Sorrel (Oxalis family). 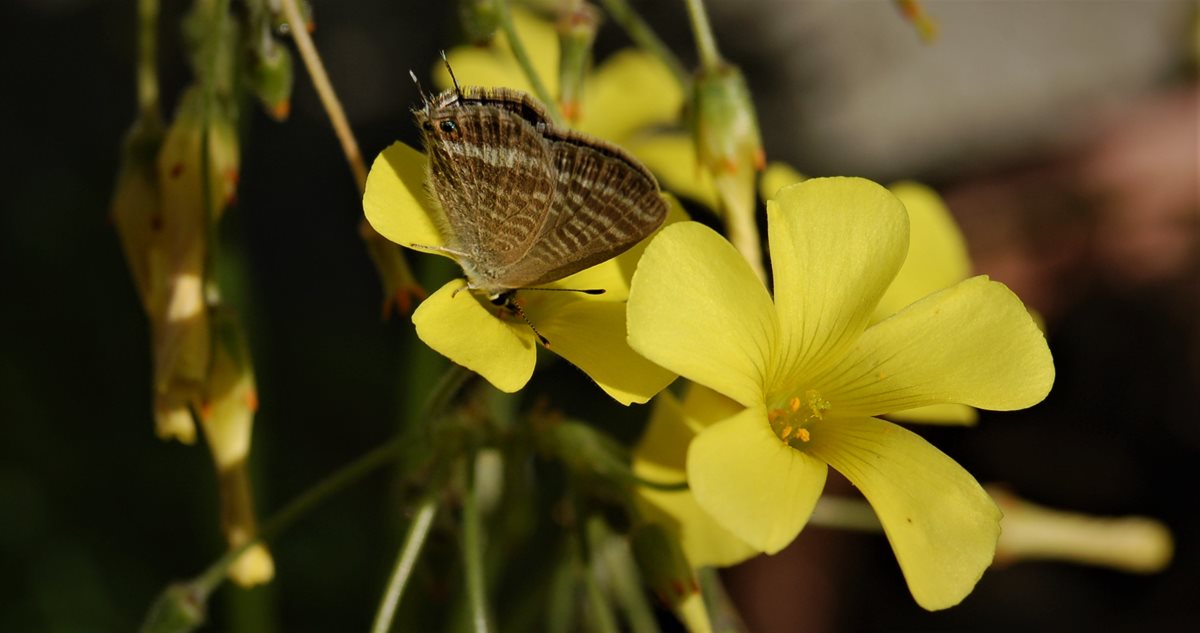 Visited by a Common Hairtail (Anthene definita), the bright yellow Oxalis pes-caprae is one of the Cape’s most abundant geophytes.

More examples of fynbos bulbs in our history unfolds as you page through the old books on the subject: the heavenly smell of a fruiting Amaryllis – the Kukumankranka (Gethyllis spp) – was used to perfume colonial linen cupboards; the tuberous root of Arctopus echinatus treated syphilis and epilepsy; and the leaves of the rhizome Agapanthus – now a worldwide garden plant – were employed as wound dressings.

But no matter their name, appearance or our use of them, the strategy is the same among all the geophytes: stay underground when times are tough; grow and flower when conditions are optimum. Some geophytes flower each year – usually out of the summer fire season – while others are prepared to wait until after a fire. 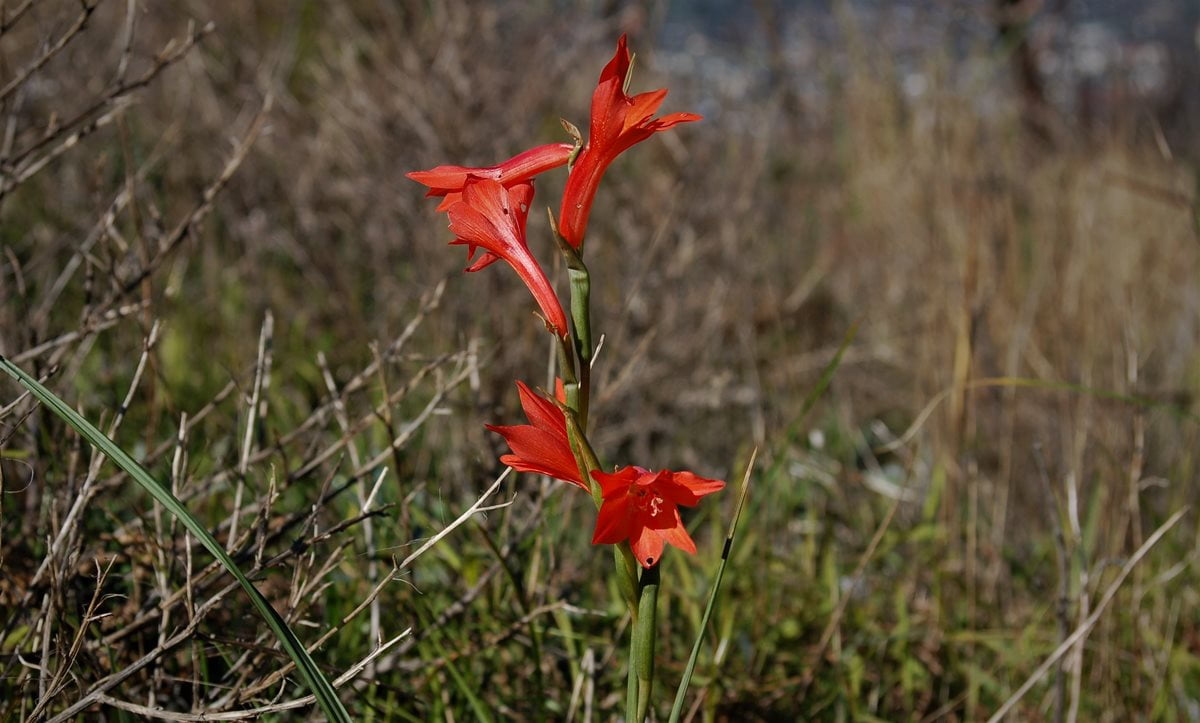 The Iris Gladiolus watsonius flowers regularly during late summer – risky in the fire season but it guarantees pollination via the Table Mountain Beauty butterfly (Aeropetes tulbaghia).

The Amaryllis Hessia cinnamomea on the other hand remains underground for decades, patiently waiting for a fire to trigger it back into life.

The evolution of geophytes and their abundance in fynbos is a consequence of the ferocious conditions of their environment: relentless sun and wind plus long arid summers and regular fire. It makes perfect sense to wait things out underground until conditions are more suitable, whether it’s the arrival of the winter rains or a freshly-cleared, post-fire landscape. 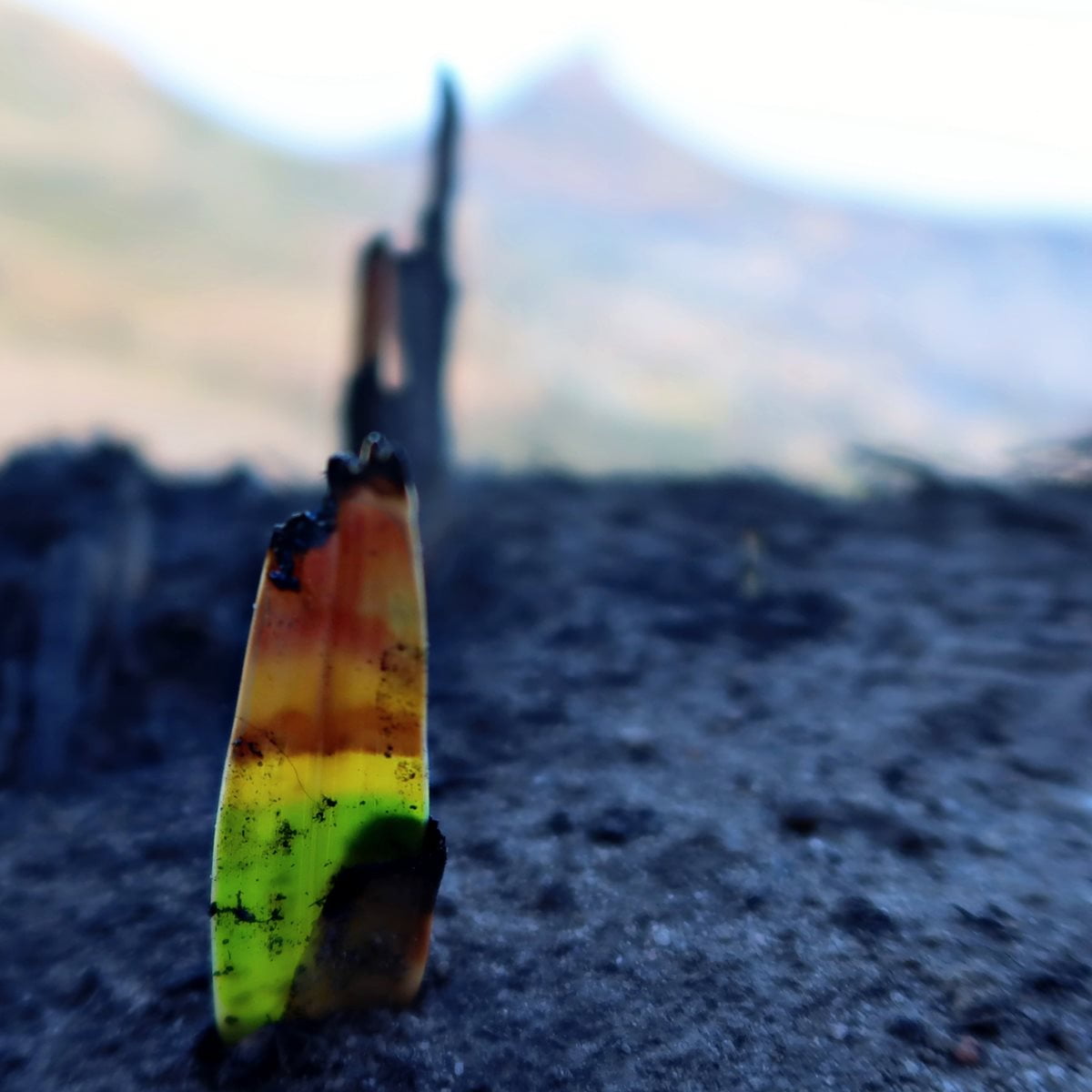 It only takes two days after a mountain fire for Watsonia (in the Iris family) to start showing signs of growth.

A few weeks is all that’s needed for stands of Spiloxene to grow & flower after fire – this plant is in the Star Flower family.

And remaining underground means geophytes are less vulnerable to surface-based predators and airborne diseases though there are plenty of soil pathogens and sharp-toothed mole rats to contend with as well as animals like baboons and porcupines which dig up and eat carbohydrate-rich geophytes. 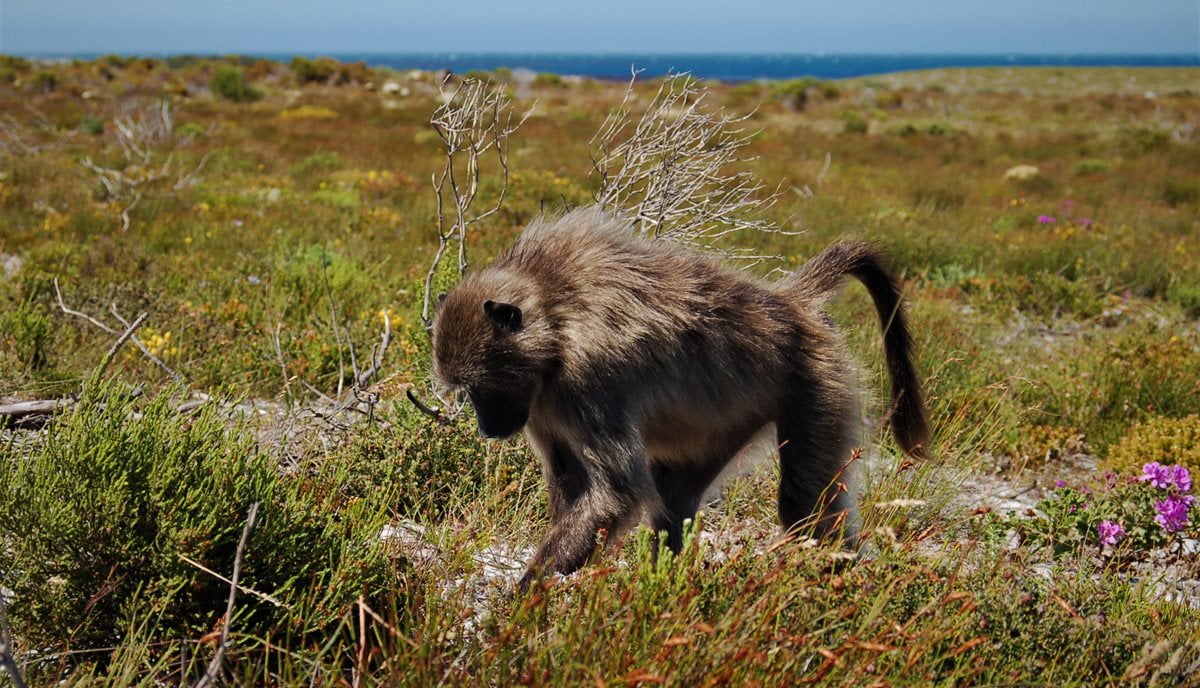 A juvenile baboon in the Cape Point Reserve forages for edible bulbs in coastal fynbos – just like we used to do until a hundred or so years ago.

So far so good. Now the hard part: seeing them. And identifying them.

It’s the ‘underground’ part that so bedevils their identification, especially since they can remain hidden for years or even decades. And when they do finally emerge – blinking in the sunlight – you are at first rewarded with little more than a pair of green androgynous leaves. 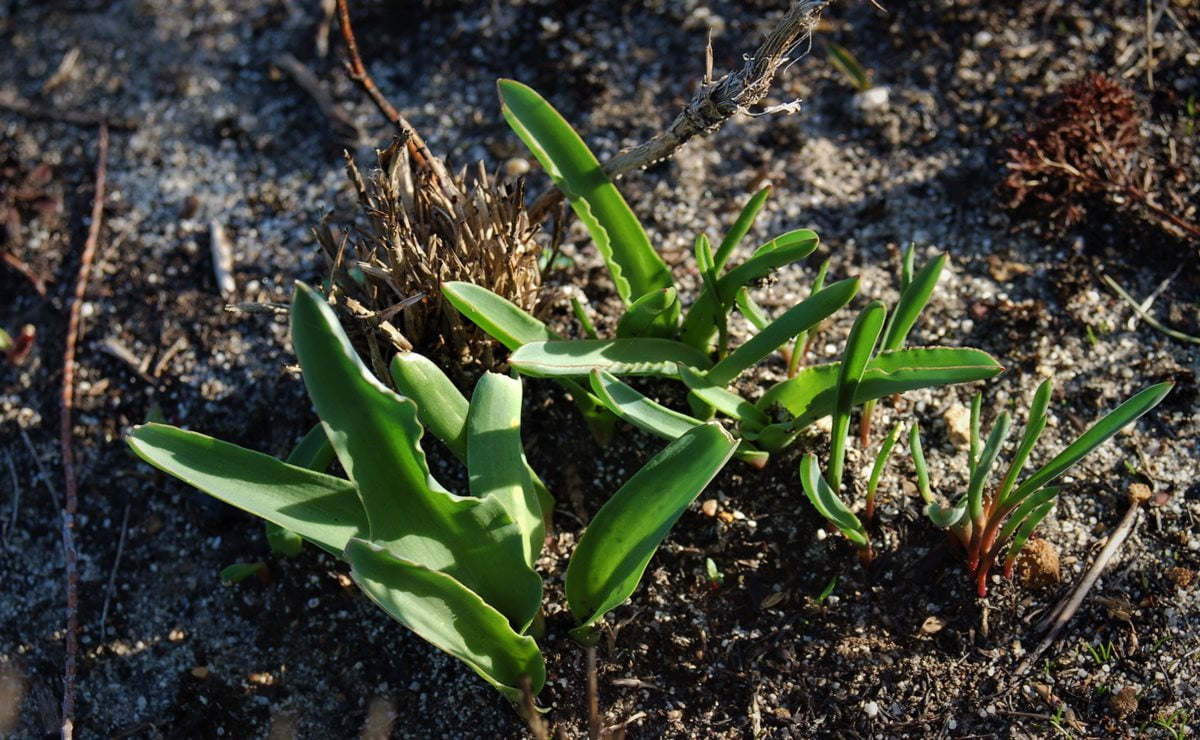 There’s little in the way of clues as to what they may be at this stage – though the leaves of some Amaryllis species – Haemanthus and Brunsvigia – can get longer than your arm. Ribbed leaves may be a Babiana Iris, stacked lime-green leaves most probably a Satyrium orchid … but then they bloom and it’s supernova time.

Now identification becomes easier though you may need to be quick: some bulbs produce a single flower and for only a few hours in the afternoon. Some bulbs flower en masse and are easy to find; others grow only in solitary little corners.

But whatever the flower’s extraordinary colour or exotic shape, it is not – as you know – for our visual benefit. The design of the flower, its colour, markings and scent (if it has one) all serve one purpose: to get noticed by its pollinator, whether a bird, insect or even mammal – it’s advertising, essentially – in the quest for fynbos pollination.

Be that as it may; it still gives us one of the most beautiful shows in nature. 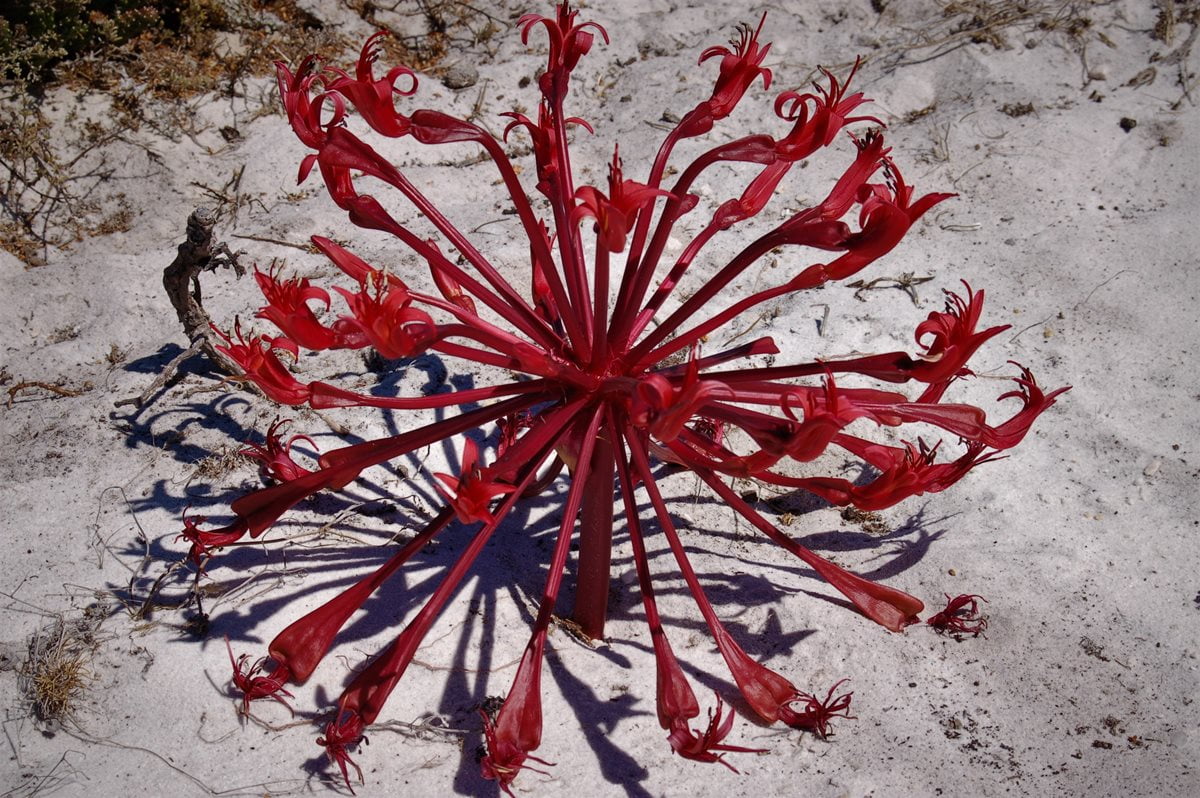 The Candelabra Lily (Brunsvigia orientalis) is bright red to attract pollinating sunbirds & its sturdy, multi-branched form gives them a perch. 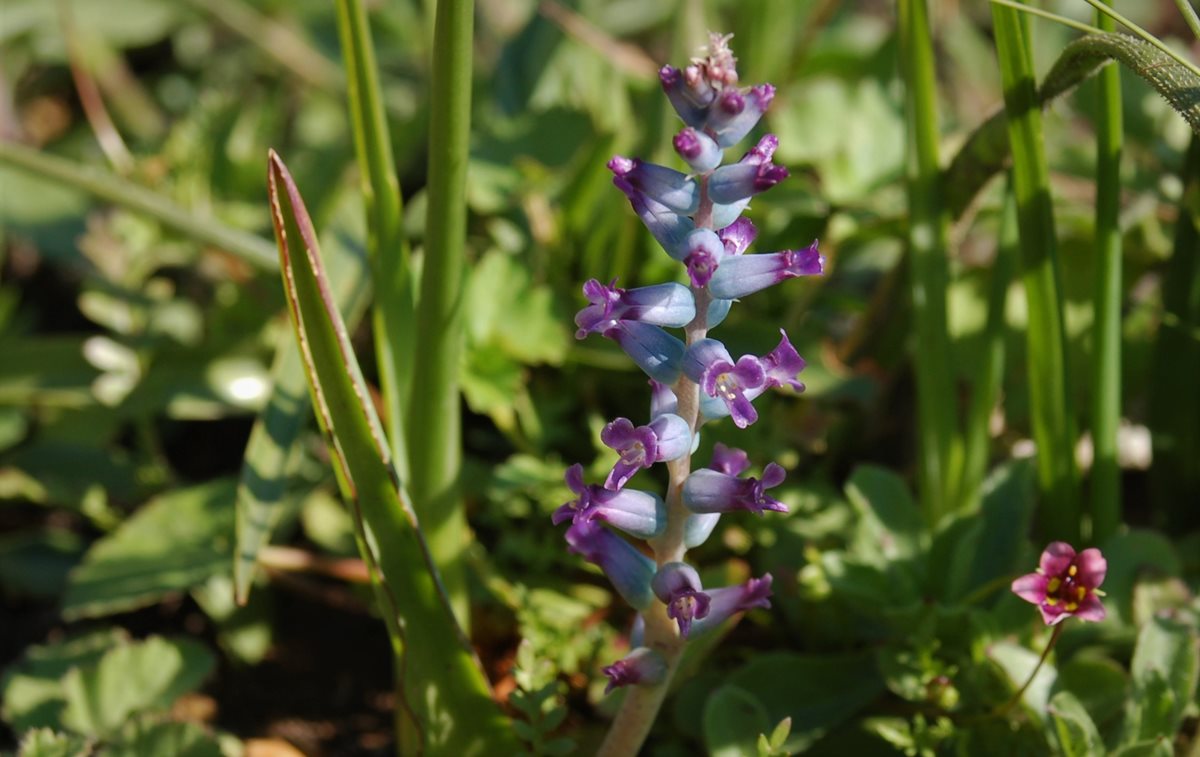 The delicate blues & indigos of the Hyacinth Lachenalia orchiodes entice long-tongued flies as its pollinator. 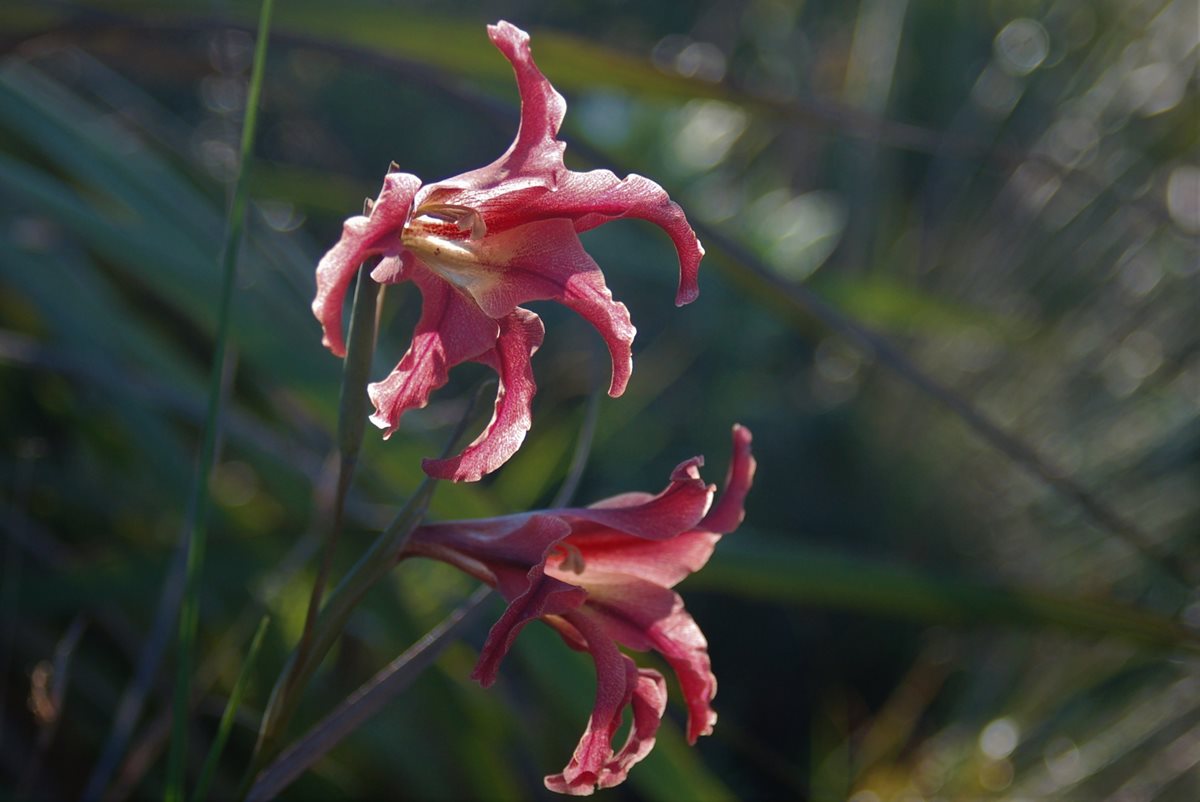 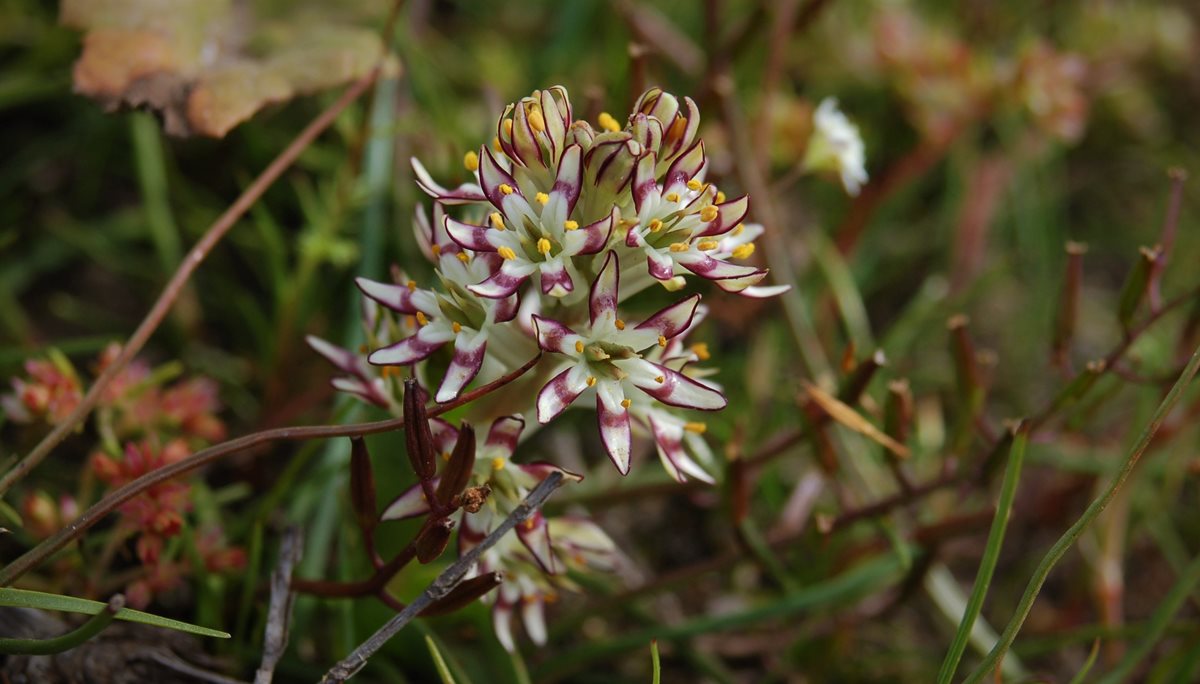 The strange-looking Wurmbea inusta is in the Colchicaceae family & releases a sweet scent to attract insects. 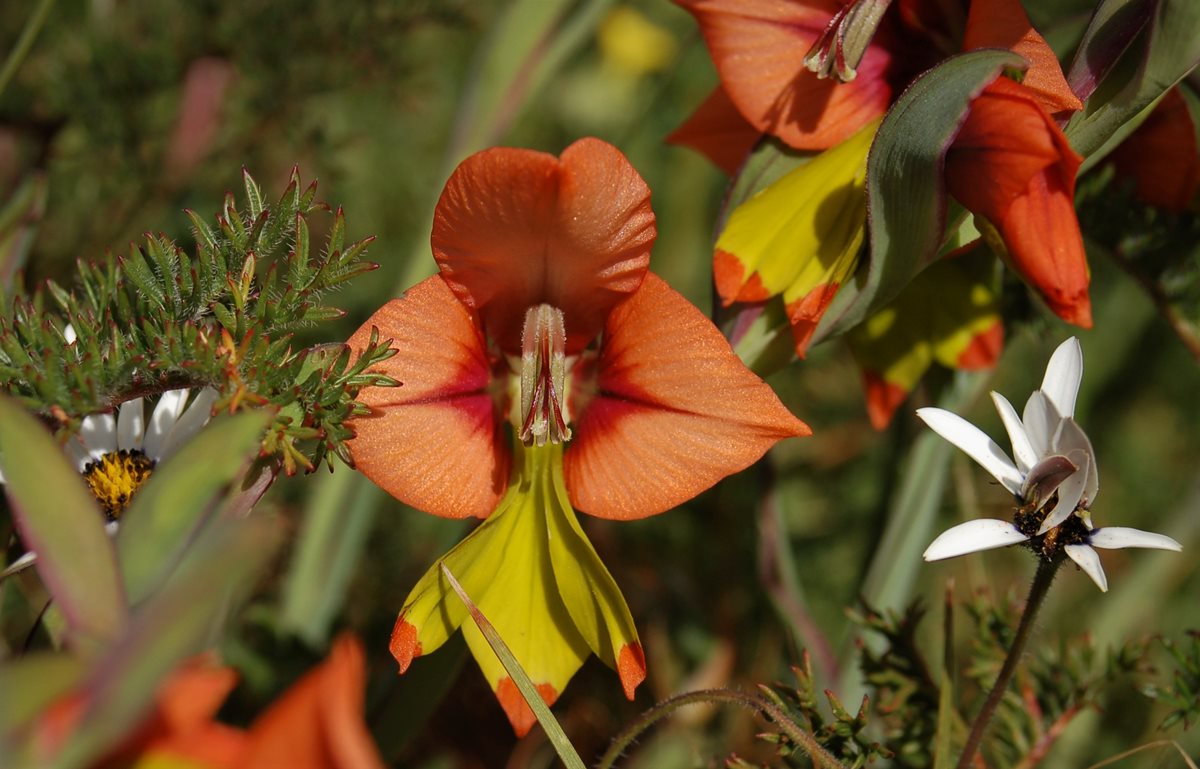 The outrageous shape & colour of Gladiolus alatus stop hikers in their tracks but this iris uses this combination to entice solitary bees as their pollinators. 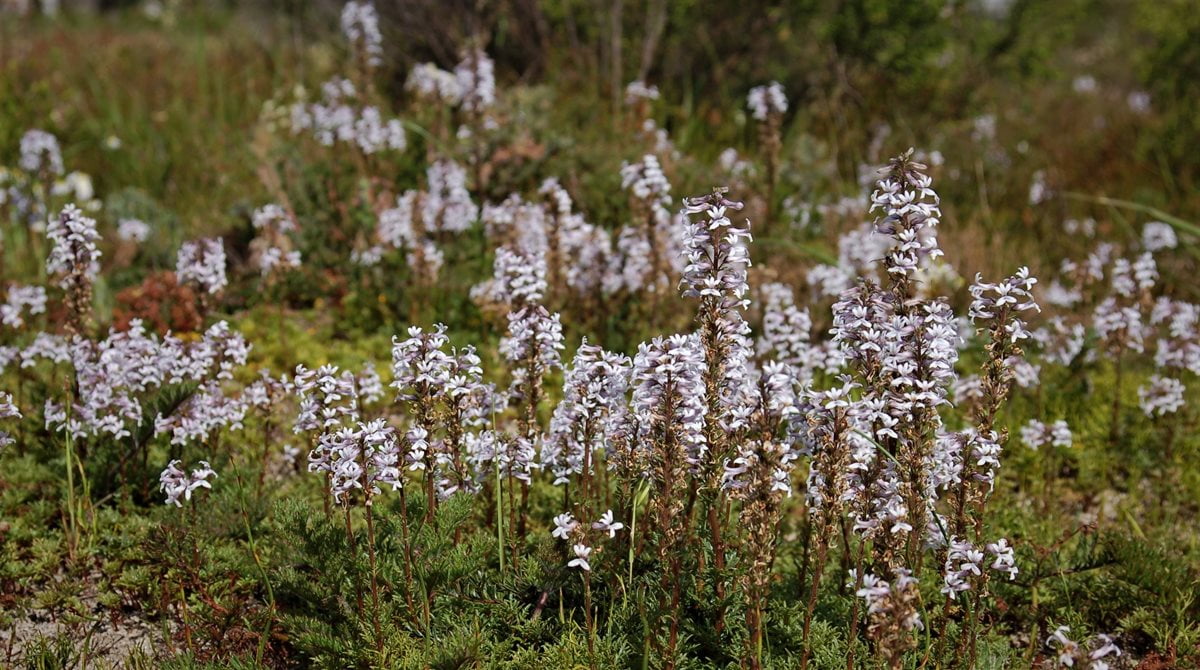 Flowering in massed stands after fire, Bulb Baroe (Cyphia bulbosa) is a tuberous member of the Lobelia family; the name Baroe is of Khoisan origin.

On the left, Geissorhiza aspera, a type of Iris; on the right, Spiloxene capensis in the Star Flower family. 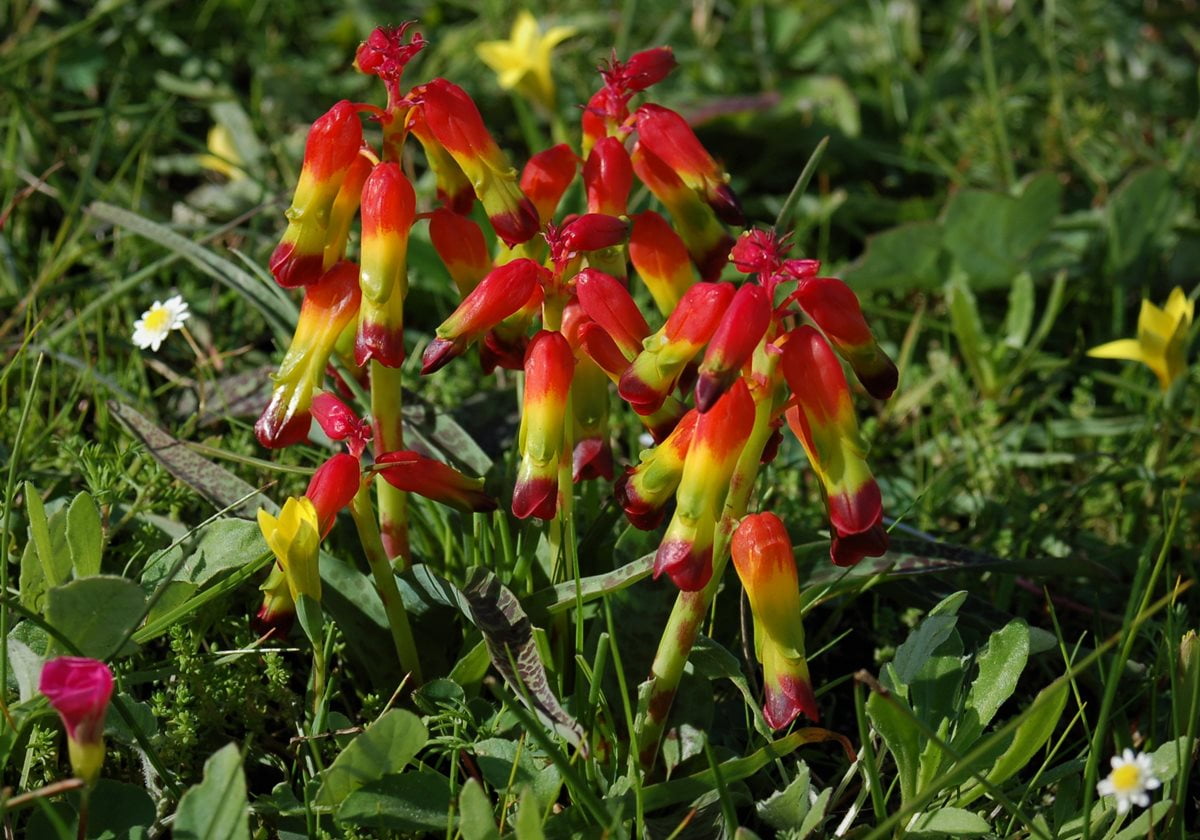 Lachenalia aloides is one of the more spectacular Hyacinths in fynbos; it’s also known as a Cape Cowslip.