Dawn over a dark Atlantic Ocean. My eyes were already open when I heard the sound of bodies moving quietly behind me. It was, however, just my family beginning to wake up. We’d spent the night on the cliffs above the beach at Olifantsbos near Cape Point and it was clear there’d be no more sleep. Our new-born was snuffling for milk and the teenagers already bickering – they never seem to stop these days. And my skin parasites were driving me crazy.

I padded over and sat down in front of one of my sisters. Her deft fingers ran through my thick brown hair, picking out ticks and fleas as the rest of the family joined us on the rocks overlooking the ocean. We sat there quietly as sunlight spilt over the hills and lit up our land: my name is Alpha and I run the Olifantsbos baboon troop. 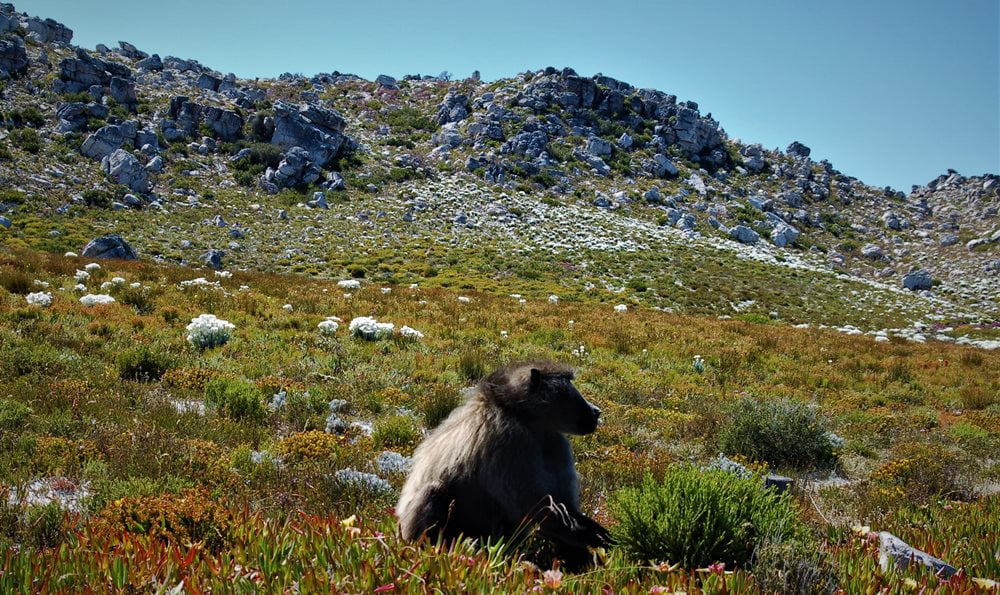 We sleep up in the mountains for protection. Our old enemies – lions and leopards – are long gone but old habits die hard, and besides, there are still dangers here: eagles, the tuft-eared rooikat and poisonous snakes. I’m in charge so I’m up first but we baboons don’t like to get going too early – perhaps you feel the same – and so our early mornings are spent lying around, grooming and socialising with one another. I enjoy this time of the day: at the age of 18 and weighing in at 40 kilogrammes (88 pounds) I am – if you’ll permit a little immodesty – in the prime of my life (we age twice as fast as you do) and my status gives me the chance to oversee the 30 plus members of the troop without the kids crawling all over me. 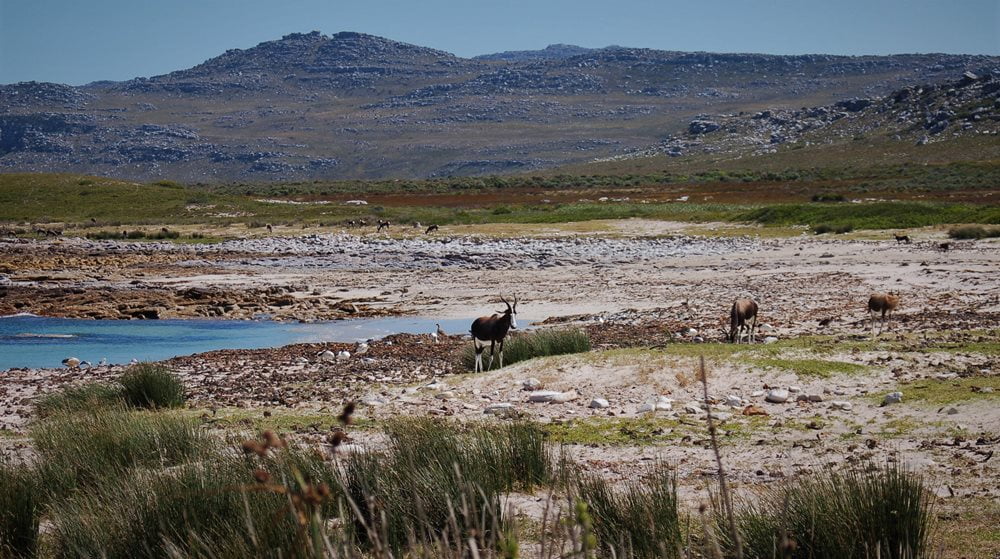 We share the Olifantsbos coast with antelope & ostrich – we all find nutrition on & around the beach.

By mid-morning however we are hungry and I make the call: time to start foraging for food. We spread out in a long straggling line with adult baboons taking it in turns to keep watch as the rest of the troop moves with heads down, scanning for food; I take my turn of course but to be honest, the older females are the most vigilant. Maybe it happens with you too.

At first glance there’s nothing very obvious to eat in fynbos, the vegetation that covers these mountains, but we’ve lived on the Cape Peninsula longer than you have and we’ve learned a thing or two. The sound of snapping proteas accompanies us as we walk (we drink their nectar and nibble out their seeds) and we pick and eat the flowers of over 20 different fynbos plants. The older children are learning to identify which leaf signals underground food – a gladiolus bulb perhaps – but, like you, it’s sweet sugar and meaty protein that we crave the most and that’s why we are coming off the mountains. 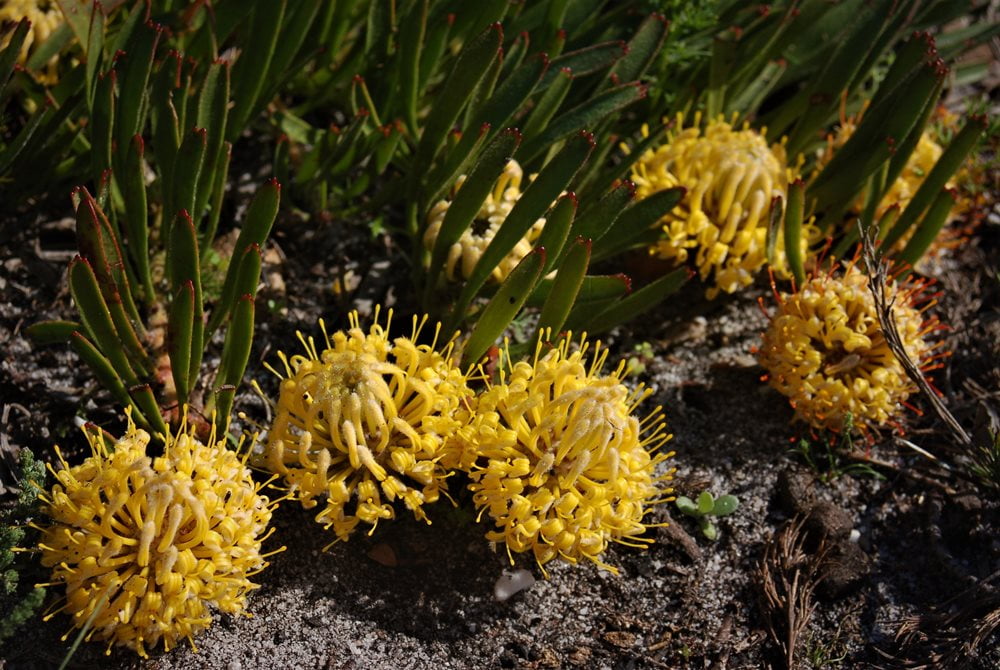 It’s an extremely rare Protea for you but just another food item for us: the Snake-stem Pincushion (Leucospermum hypophyllocarpodendron).

Baboons find safety in the caves and ledges of the Cape Mountains but rarely do we find abundant, nutritious food there. We are heading downhill because we know the golden rule of survival in the Cape: the closer you get to the ocean, the more calories you find.

And it starts the moment the land flattens out. The lean mountain fynbos gives way to richer coastal Strandveld where there are several fruit-bearing plants – we especially love the Tortoise Berry (Muraltia spinosa) and the Sour Fig (Carpobrotus edulis) – and we take our chances catching bugs and scorpions and raiding bird nests as there are far more animals in Strandveld than there are in fynbos. 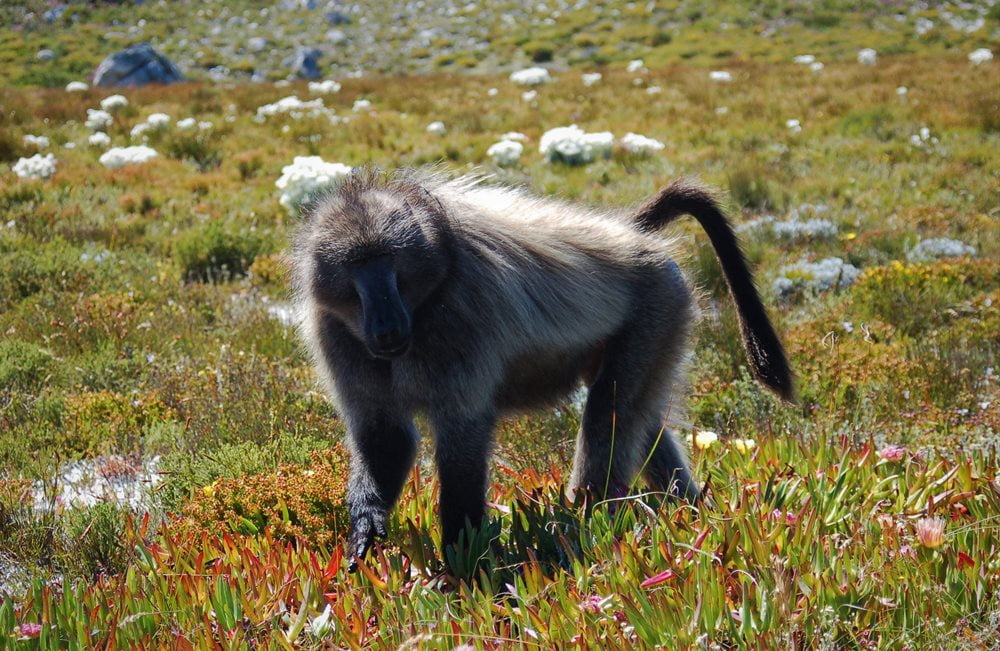 The fruits of the Sour Fig (Carpobrotus edulis) are among our favourite food items; you harvest them too & make a sweet jam.

But the timing of our arrival on the coast today is no accident. The biggest, easiest calories are lying in front of us, exposed by the daily drop in the ocean: shellfish. Millions and millions of them. 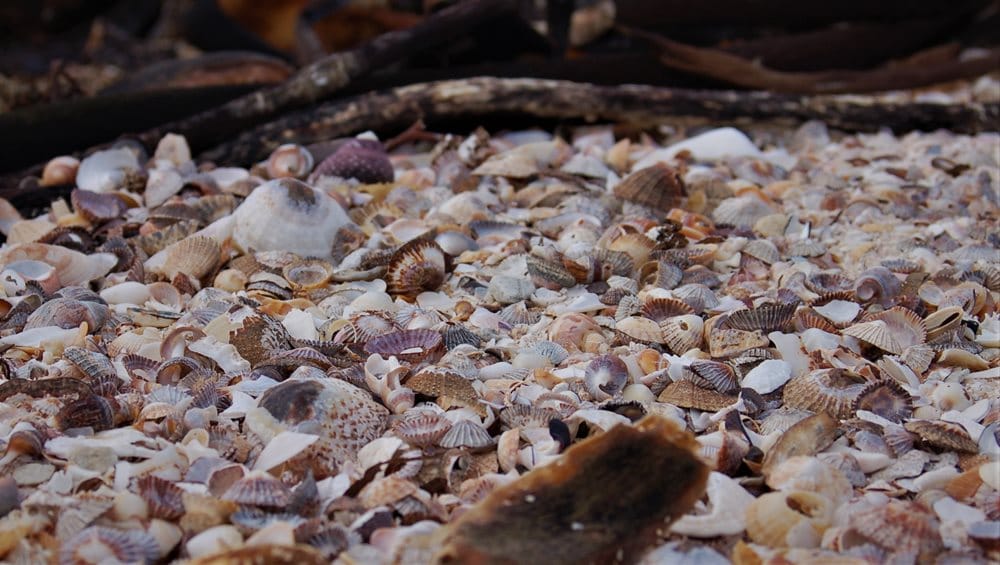 The Cape coastline is rich in both species diversity & biomass – there is a lot of free food here if you are prepared to wait for low tide.

Not only are we Cape Point baboons the most southerly-living primate (other than you of course) but we are also the only ones who – along with you – forage for food in the inter-tidal zone. It’s true, we don’t devote a huge part of our diet to seafood (95% of our diet is plant-based) but when the opportunity presents itself, we take it: there’s no chasing or fighting to be done, no sharp defensive claws or poisonous fangs to contend with – just easy, free protein. 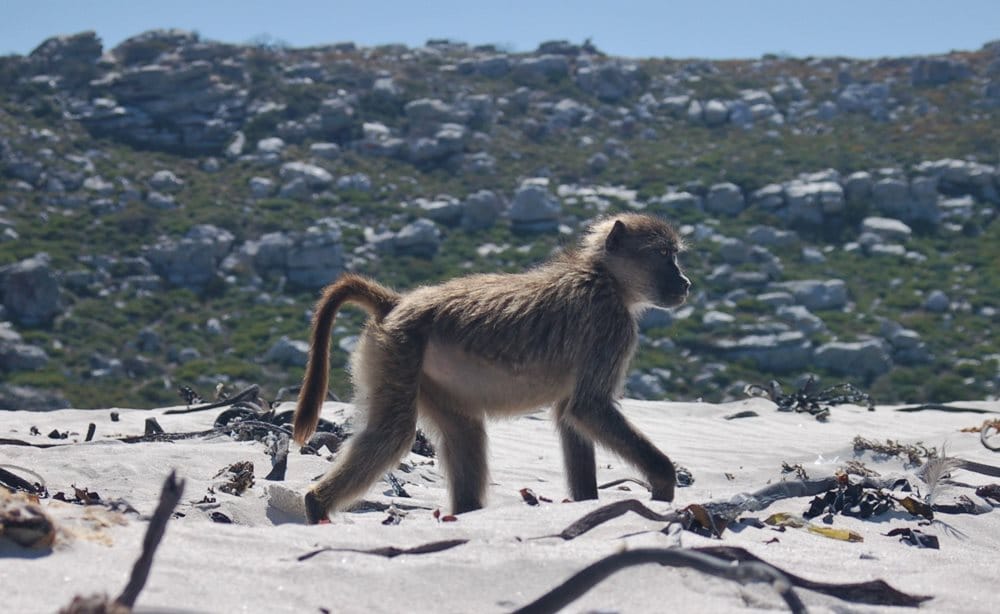 We generally move quickly across the sand but young baboons love sliding down sand dunes – perhaps you have seen the same with your children.

It is low tide at Cape Point and the troop moves across the beach and onto the still-wet rocks; the shellfish live in layers according to type: first periwinkles and then barnacles but it’s the deeper-living ones we want – limpets and mussels – as well as rock pool-marooned crabs. We bite the tops off immovable limpets and suck out the flesh but mussels we can tear off the rocks and crack open with our teeth.

We learn foraging techniques from our mothers, watching what she picks out & what she discards as we cling to her back.

After a while the tide turns and we feel the spray of cold water on our fur: time to move back inland and look for more food – in fact, this is pretty much all we do. For about eight hours every day we are on the hunt, walking an average of nine kilometres (five and a half miles) just so we can make it through to the next day.

And here’s where the big problem starts. Humans have also identified the coastal strip – our main foraging area – with better food, and have now built towns and villages, car parks and picnic sites there. And with a single loaf of bread representing an entire day’s worth of foraged wild food, you can see why we baboons prefer to take the easier route: who wants to spend the day grubbing around for roots and beetles when you can simply charge into a picnic, bare your teeth and grab armfuls of high-calorie food?

And we REALLY want your food: a rival of mine, the Alpha male who led a troop outside of the reserve was x-rayed when finally caught. He had seventy metal items in him – bullets, pellets, ball bearings – but still he raided houses and cars for food. Your calories are unrivalled.

Then again, baboon/human conflict is nothing new. We’ve long competed for the same resources – bulbs, wild honey, small edible animals – and there was a time when a giant cousin of ours – Dinopithecus ingens – gave you humans a much harder time than we do now. Weighing up to 77 kilogrammes (170 pounds), this baboon was twice the size of us modern ones and it took more than a few well-aimed stones and shouts to drive them away from food. 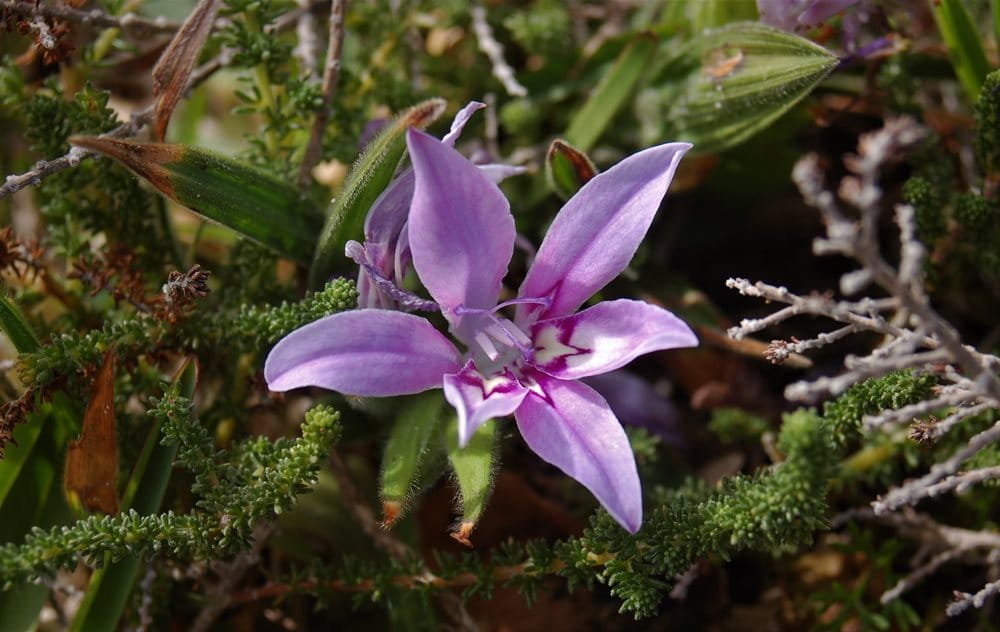 We relish the underground corms of these Irises so much that you named the genus after us: Babiana, your word for us in Afrikaans.

But those glory days are gone and with no picnickers at the Olifantsbos car park, the troop resumed foraging on the mountain slopes until mid-afternoon when we began to work our way back to a sleeping spot. Our territory at Olifantsbos is about 3700 hectares (14 square miles) and so we have a few overnight places to choose from; at around four o’clock – maybe you finish work then too – I lead the troop up the cliffs to one of them, making sure we all get in. 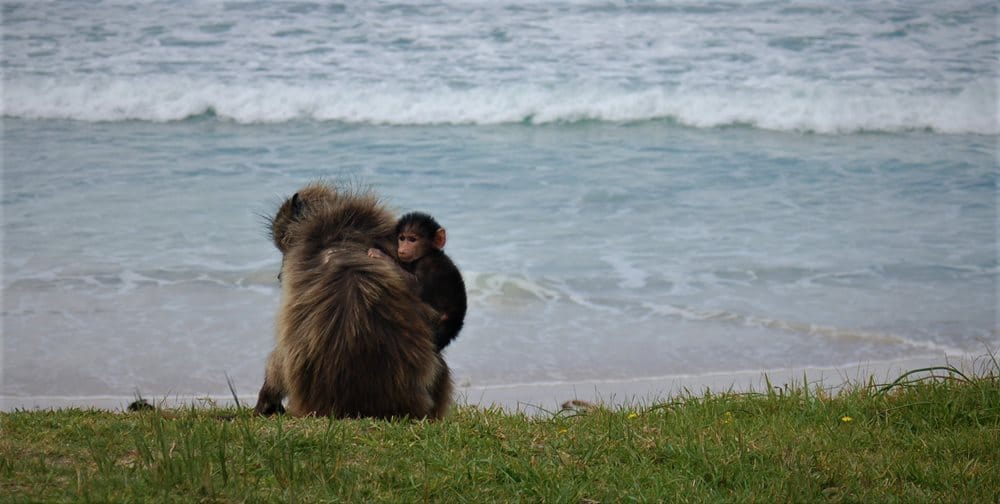 Our future is uncertain: we are growing in number but face shrinking habitat & continued conflict with humans.

We like to end the day as you do: sitting somewhere comfortable to watch the sunset and letting the last of the sun’s warmth tingle our skin. The typical noises of a family – crying, scolding, playing, arguing – ebbed as the darkness grew and before long my family were asleep. I sat for a while, watching, listening, until I was satisfied we were safe and then joined them.

My name is Alpha and I run the Olifantsbos baboon troop. 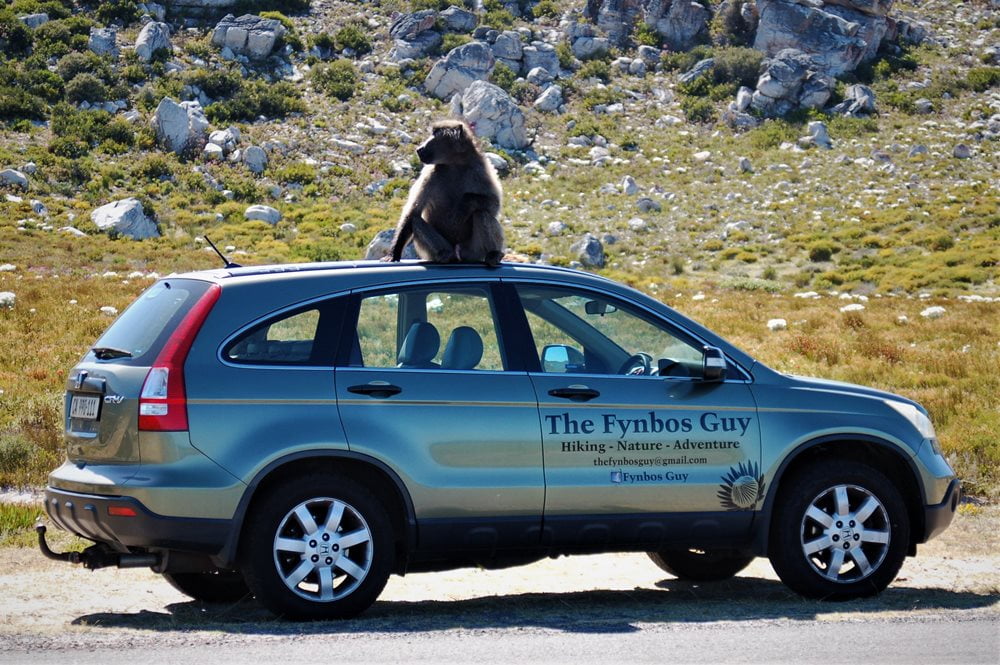