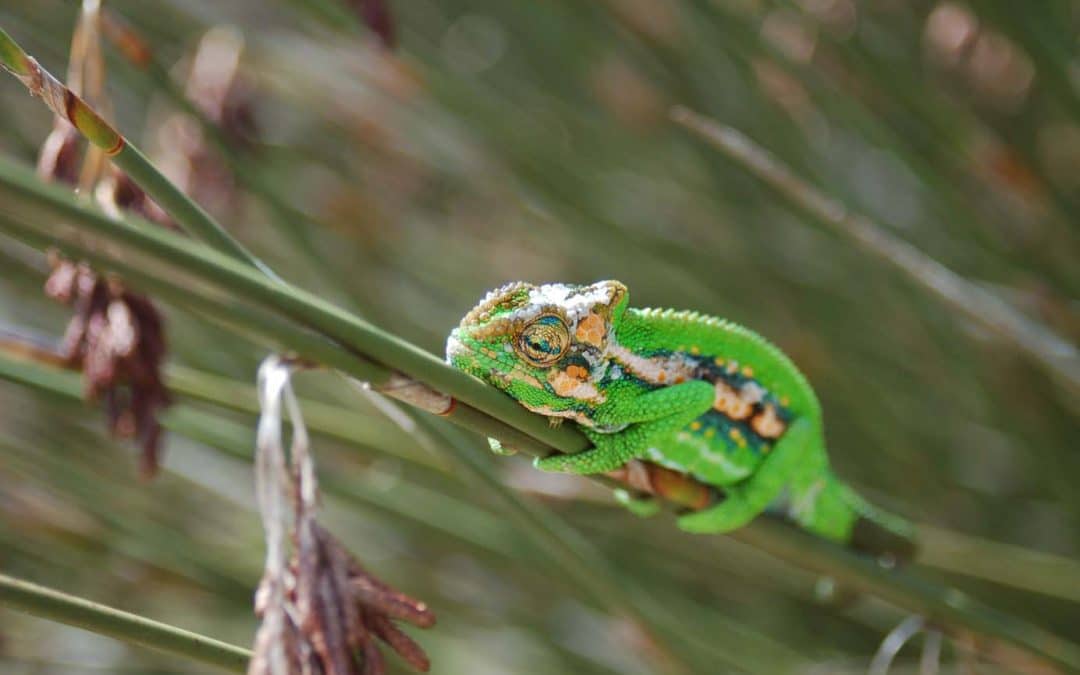 When visiting an urban nature reserve just 30 minutes from the centre of Cape Town, you’d certainly expect to see frogs and birds and beetles but perhaps not hippopotamus, antelope and tortoise. Rondevlei Nature Reserve doesn’t even cover three square kilometres but its wildlife packs such a punch I was rendered speechless on a recent morning stroll. And that takes some doing. 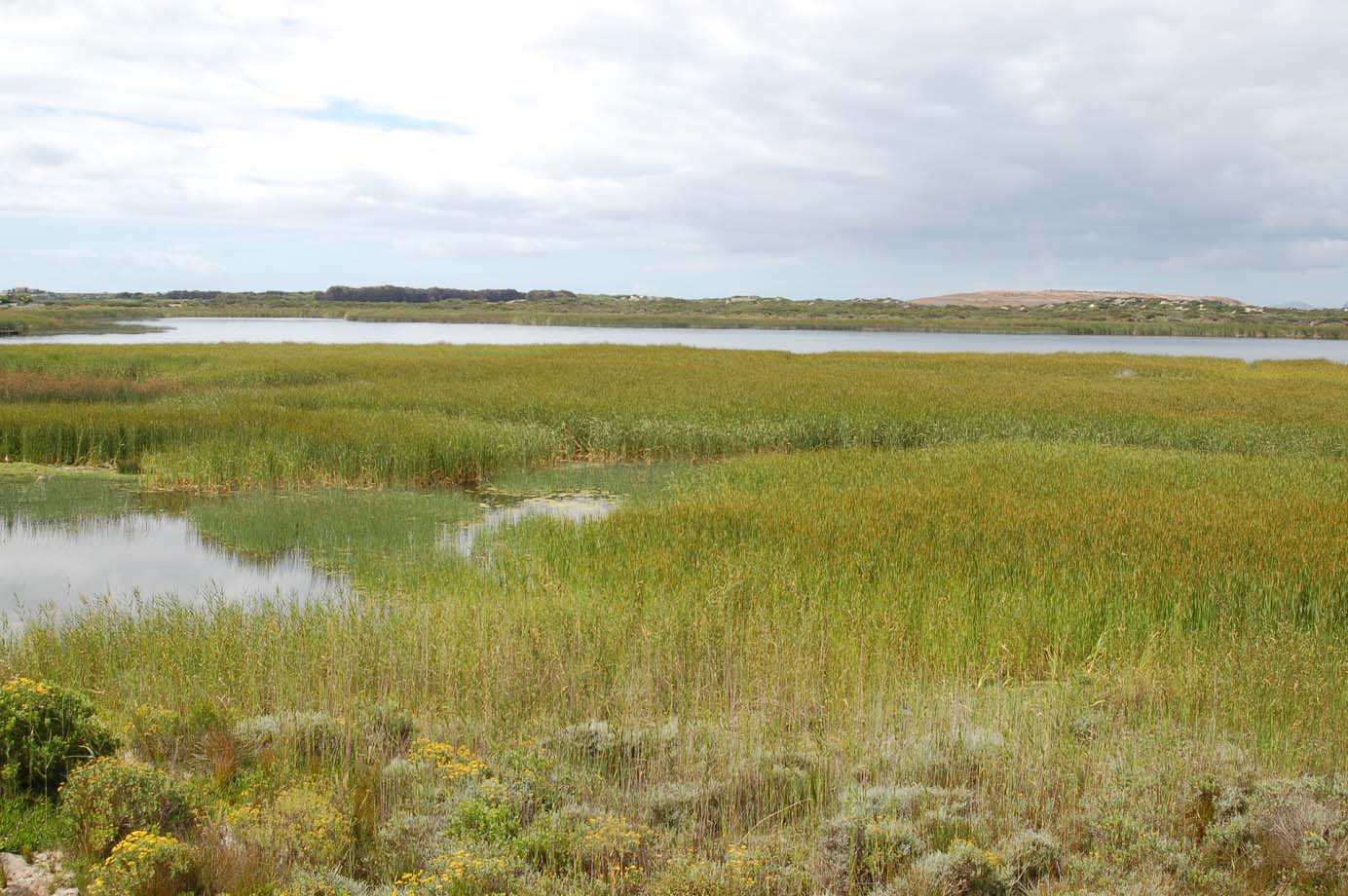 Wetlands such as Rondevlei once covered huge parts of the Cape Flats, providing home to hippos & amazing birdlife.

Rondevlei lies on the Cape Flats in an area called Grassy Park. It’s not so grassy anymore around the reserve – you approach it via a honking highway and a busy street – but step through the entrance gate (there’s no charge) and birdsong replaces the sound of traffic. Built around a large, reed-lined coastal lagoon, the reserve is thoughtfully equipped with meandering paths, observation towers and tucked-away bird hides. Several hundred years ago, this kind of habitat covered the Cape Flats – thickly vegetated sand dunes with lush wetlands in between them – before being bulldozed to make way for housing and factories. It used to be a landscape filled with wildlife – from rhinos and buffalos to lions and hyenas – and a visit to Rondevlei gives you a taste of what it must have been like. Unlike the silent fynbos on the Cape’s high mountains, this lowland fynbos and strandveld vegetation hums with insect life, which in turn supports a huge cast of animals. Over 250 bird species have been recorded here and there are giant rain spider nests, scampering lizards and darting dragonflies everywhere. 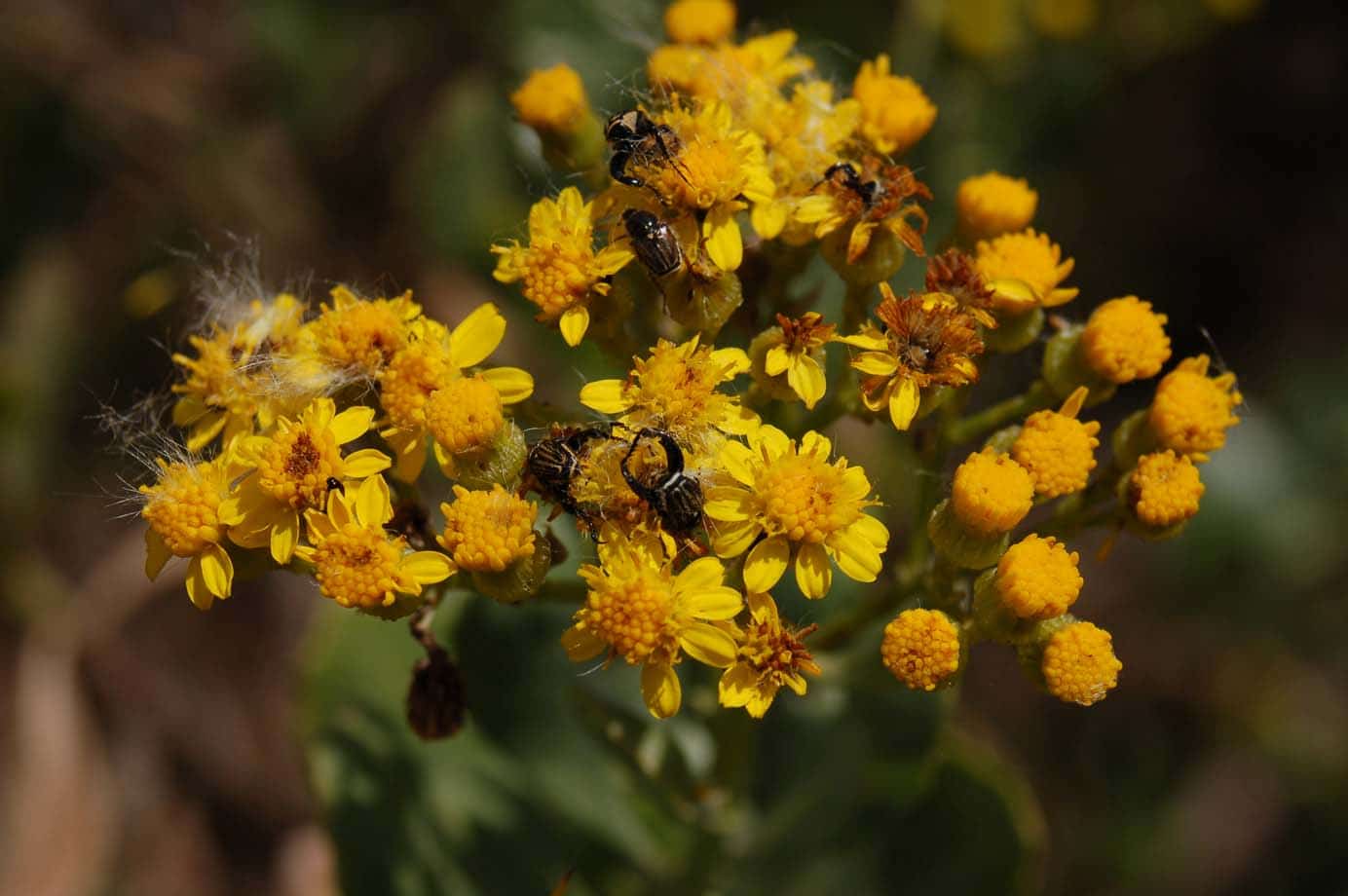 Monkey beetles are not known for their finesse as pollinators: they simply dive straight in.

The first sign of a mammal was not the disappearing tail of a rodent but the dinner plate-sized footprints of the reserve’s resident hippos. And then the dominant male’s calling card: a bedraggled bush coated with hippo dung, fanned at high speed by his tail as he marks his territory. Reintroduced in the 1980s, they are animals that used to occur in great numbers on the Cape Flats and although they are seldom seen (trust me, I’ve tried), their signs are enough to remind you that life here was once at risk from large and dangerous animals. 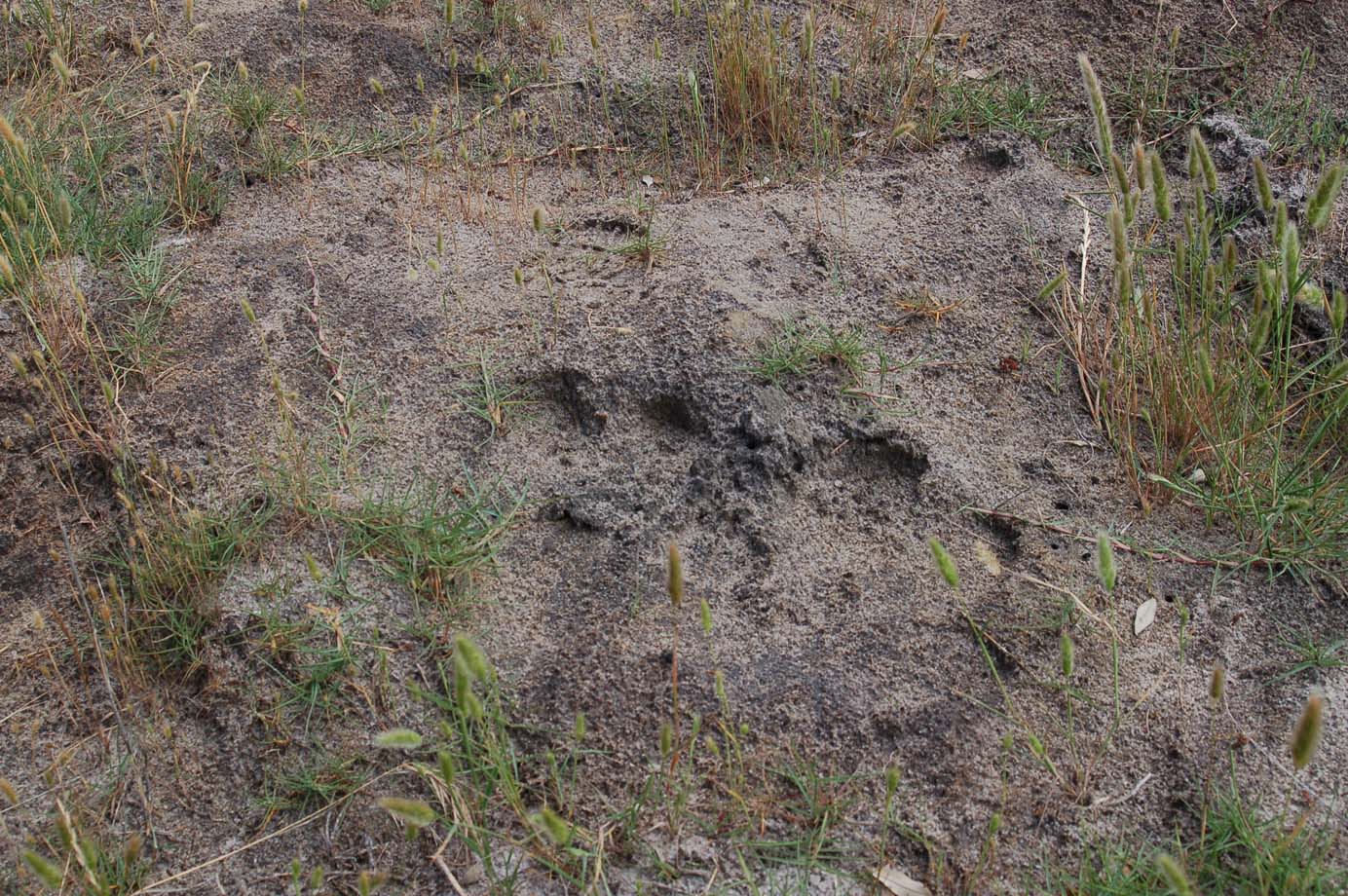 Hippo footprints are scattered all around the reserve but I have yet to see a live one there. 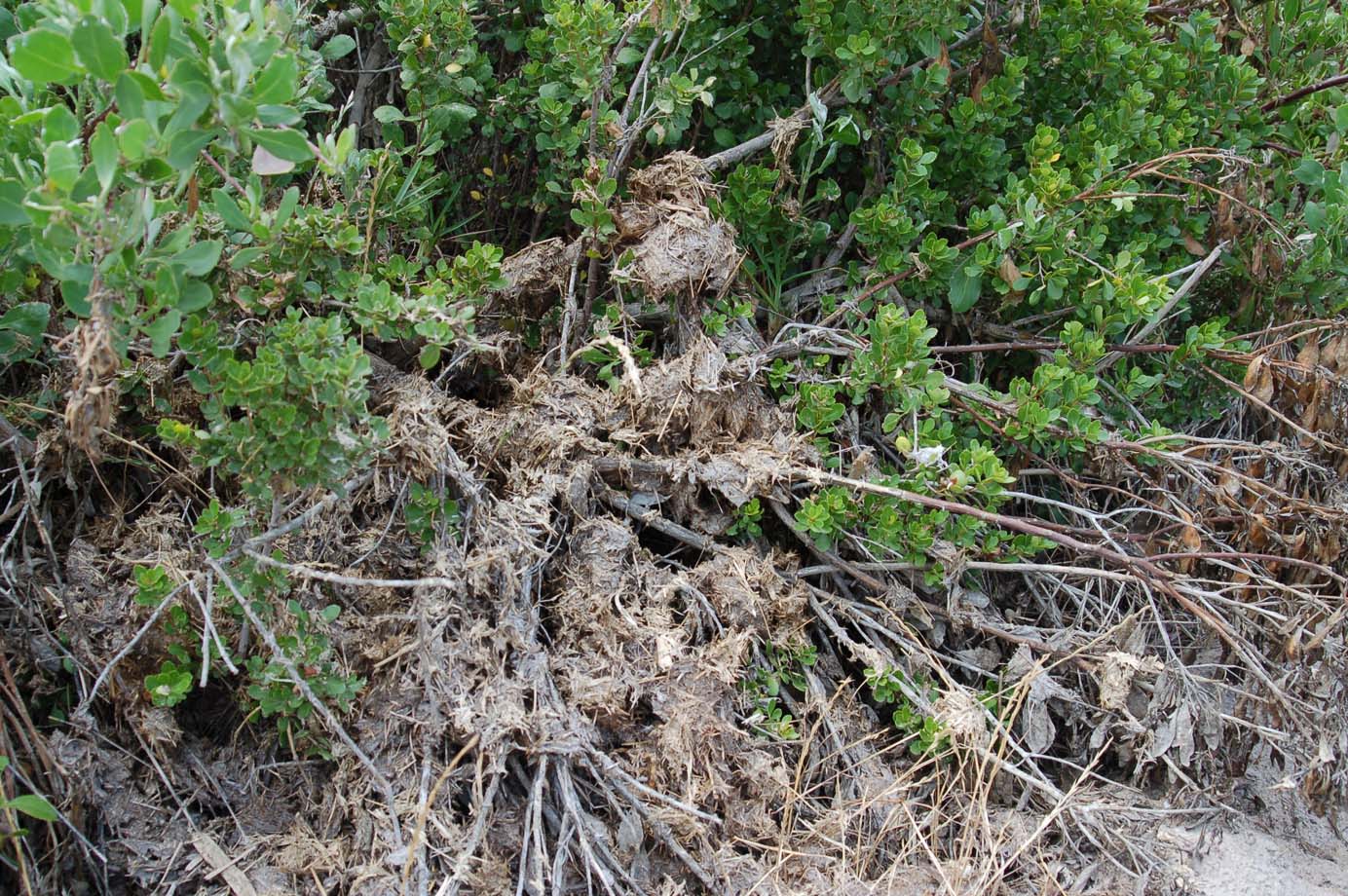 The territorial male marks his territory by coating an unlucky bush with his dung.

The bird hides are great places to sit in the shade and get down to some serious twitching. Wildfowl, water birds and waders make up the bulk of the avifauna and there are some showstoppers too: flamingos and pelicans are regular visitors and it would be unusual if you didn’t see an African fish- eagle gliding over the water or a marsh harrier jinking its way over a reed bed. And although the bird watching is more extensive at nearby Strandfontein Sewage Works  it is at Rondevlei that you can hunker down in a hide and get some really good close-up bird photography.

The chewed-up remains of irises & soft-stemmed plants indicates the presence of African porcupines, the largest rodent on the continent.

Other signs of mammals came into view: antelope hoof prints, the discarded husks of bulbs dug-up by porcupines, and the whitened droppings of a crab-eating predator – a Cape clawless otter perhaps? No, the presence of the crab carapace suggests the smaller water mongoose instead (otters munch up the lot). 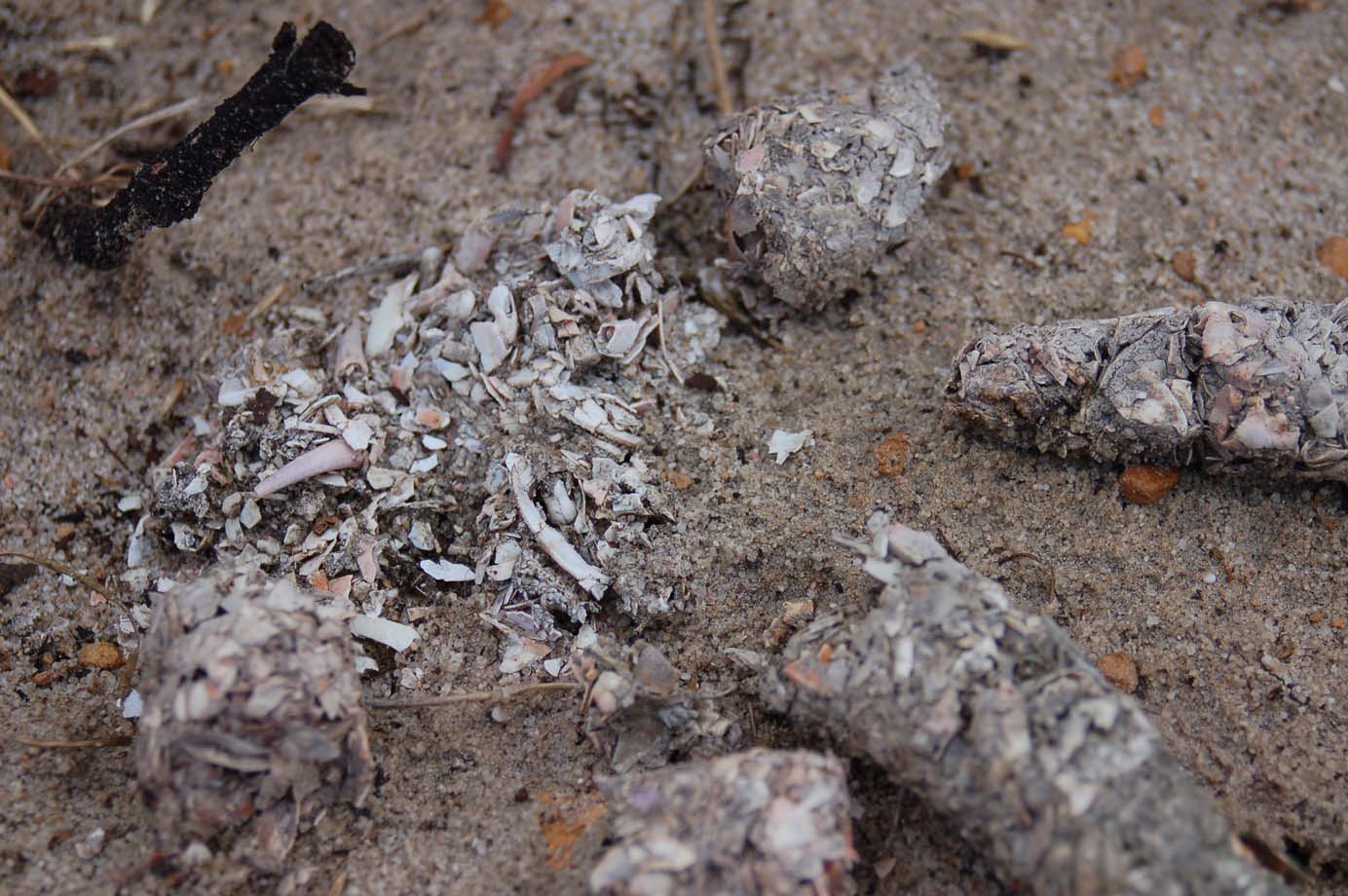 Crunched-up crabs make up most of these water mongoose droppings, another seldom seen predator here.

As the day warmed up, out came the reptiles. A stern-looking angulate tortoise shuffled past, one of the 13 different types of tortoise in South Africa (30% of the world’s tortoise species) and suddenly–making me whoop with pleasure – every big clump of reeds had its own Cape dwarf chameleon. 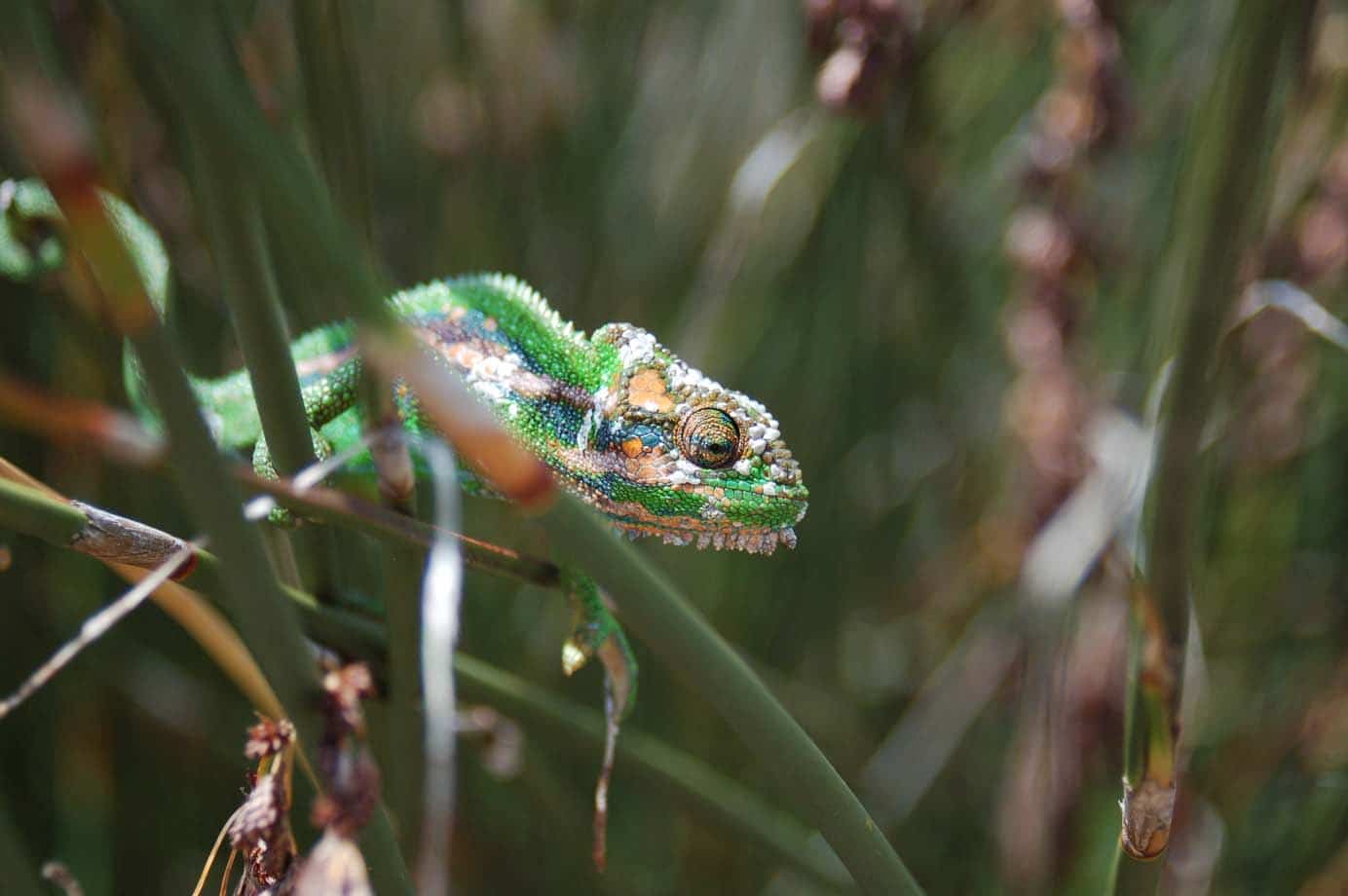 A Cape dwarf chameleon moves through a thick clump of restios, safe from predatory birds. 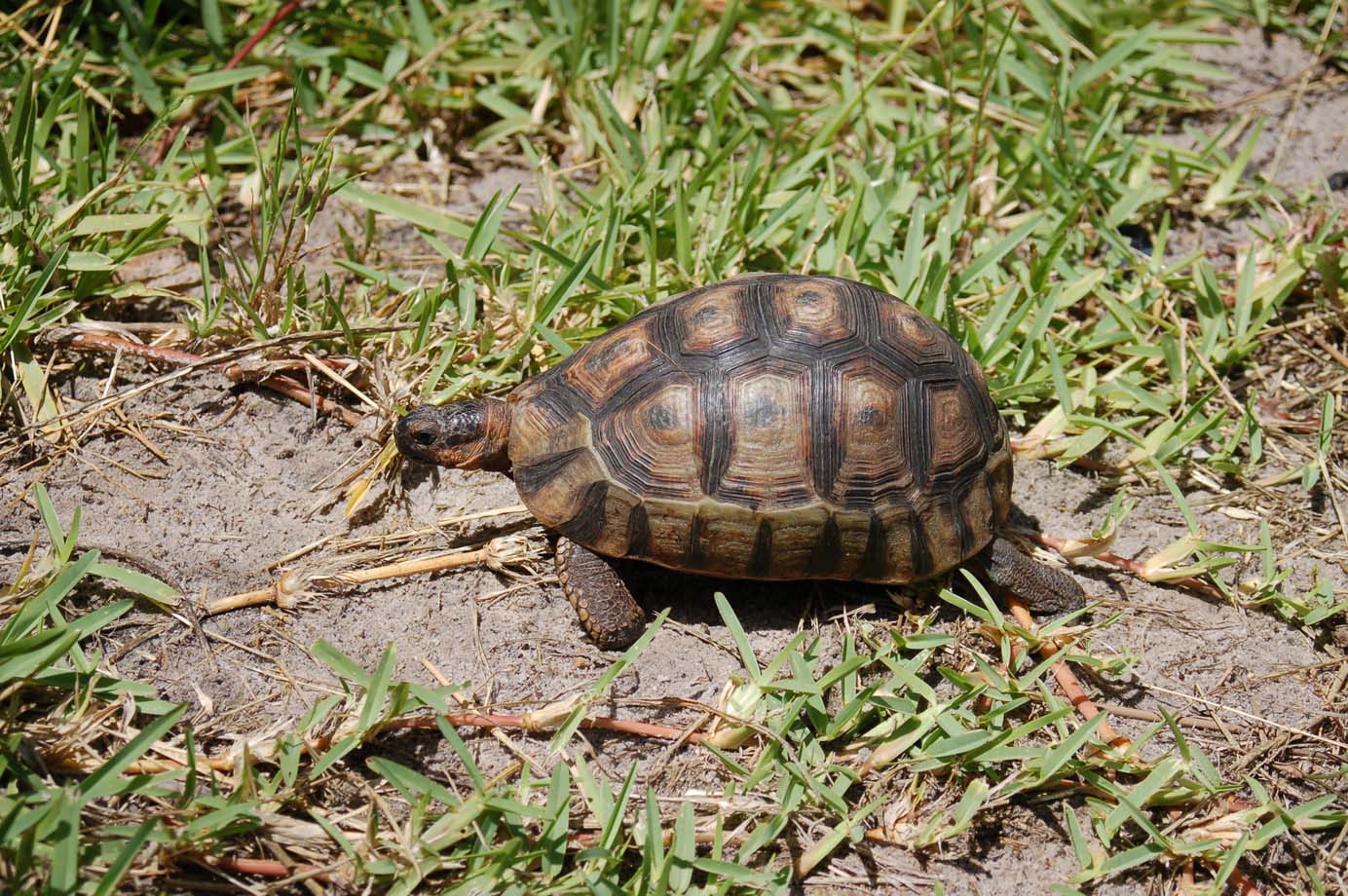 Angulate tortoises live in the reserve, feeding off grasses & the fruit of various strandveld plants.

Chameleons are amazing. Their eyes operate independently and they were literally able to keep one eye on me and another on the fly they were stalking. Many were dark in colour – even black – as they soaked up the energy of the sun; later they began to adopt the extravagant blues, reds and oranges that – somehow – causes them to become almost invisible in the foliage. But not that invisible: a mouthful of unmelodious tweets revealed a singing fiscal shrike, the arch enemy of the chameleon. With no defensive weaponry, a chameleon is easy prey for the hook-billed shrike and so the reptiles stick to the ever-swaying, floppy stemmed reeds – the restios – in which the fiscal shrike finds no perch or purchase.

The bright flowers of Chironia linoides attract bees who grasp the long yellow anthers & then ‘buzz-pollinate’ the flower.

And it’s not just the last few wild animals that find refuge at Rondevlei. Some of the rarest plants on the planet cling on to survival there – proteas and heathers that once blanketed the Cape Flats in vast swathes of colour. Indeed, one species of heather – Erica verticillata – was once declared extinct until spotted growing at London’s Kew Gardens; it now grows – phoenix-like – at Rondevlei.

The endangered Cape Flats Conebush (Leucadendron levisanus) – once abundant but now reduced to a few remaining individuals in reserves.

Complete with clean bathrooms and a couple of picnic tables set under a shady tree, there’s not much more you could ask from a place that costs nothing to visit and is open every day of the year (okay, they are closed on Christmas day – we have to give them something). You’ll find Rondevlei Nature Reserve on the corner of Perth Road and Fisherman’s Walk in Grassy Park, near the larger and more famous recreational lagoon – Zeekoevlei. Go as early as you can – the reserve is at the mercy of summer’s powerful south-easterly wind and conditions for birding and photography are usually better in the morning. It opens at 07:30 and closes at 17:00.